So I figured better late than never... I will be getting my first fish tomorrow! In the meantime here is my first ever tank build thread! 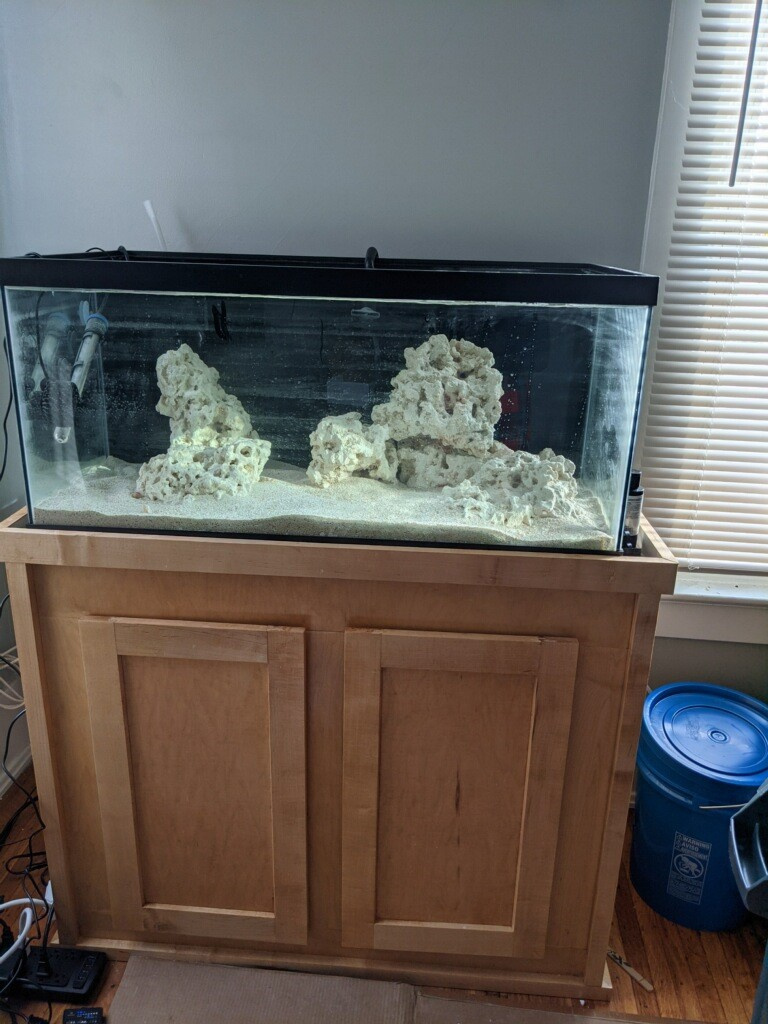 Off the top of my head that's the majority of the equipment I got. Lots of odds and ends but that's the big stuff. Here are my initial thoughts on equipment:

I am really unimpressed with the Jager Eheim heaters. I had to have one replaced already for the built in thermometer not functioning at all pretty much. I thought the redundancy would be nice but I think going forward I will just get titanium units and rely on the temp controller, No redundancy there unfortunately in the future I may get a controller.

Not thrilled with the reefbreeders ato either. I am thinking I may possibly have a bad unit. Twice now it has emptied my entire RO reservoir into the sump, filling to well over the sensor. 3-4 times it has started alarming for empty bucket/pump issue when nothing was wrong, unplugging and replugging has fixed the issue. When it works it is great, but I have had enough unexplained issues that I am considering reaching out to customer support to try to get a different unit.

The return pump may be slightly underpowered. I was worried about getting something too powerful for my overflow but didn't really think about head loss. In the future I will likely upgrade to a DC pump.

I love the Tonga Pink sand from Tropic Eden. It is very pretty and seems to be a very nice grain size. Time will tell but I think next tank I would use this exclusively, although maybe not the live version. I laid it on top of the mesoflakes as I was afraid it would be a bit fine.

Everything else I think it is too early to make any sort of determination on, but it all seems to be working pretty well. Now, on to my decisions... The main one that sticks out to me is that the tank is soft plumbed. My gf and I are going to (try) to buy a house this year so it's likely a move is in the future. From plumbing to aquascape I tried to make the system as modular as possible to try to make this move as smooth as possible, which is why I went with soft. I still think that it was the right decision for my specific scenario, but ended up being more expensive and annoying than expected. I will definitely hard plumb all future tanks I think. The return line in particular is a PITA and is causing some noise due to vibrations.

As for the sump, it didnt save me nearly as much money as I expected by going DIY, but I think I'm still happy with the decision. My silicone work is atrocious but it does work. I was really interested in having as large a sump as possible because a big point for this tank is to allow me to try different things out and gain as much knowledge as possible before upgrading to a large display tank. I wanted a large refugium for sure. I have a background in conservation biology (specifically fisheries) and the triton method is very intriguing. I am going to try out a pseudo-triton for nutrient export. I definitely don't have the flow for a full triton, and my skimmer chamber is before my refugium. Currently I'm planning to run filter floss over socks cause they seem expensive and annoying, we'll see how that goes.

My goal is to have as diverse as possible of a microbiome. New tanks are can be plagued by issues, almost all of which come down to a specific undesirable organism taking over and outcompeting everything else. Even when water parameters and all measurables are equal, established tanks seem to be far more resistant than new ones. So what's the difference? To me it seems it has to be diversity of microbiome. So to this end I am planning to start very slowly, but dose and add as many products to promote diversity as I can. So far I'm planning on:

That seems like a solid first post, I will add more in the future to keep track of progress. I will also be sure to follow up with more pictures but don't have any to post at the moment. I'm open and happy for any and all feedback! There is a wealth of knowledge on this site that has already benefited me immensely, happy to be a part of this community.

Looking good, how long has it been filled?
OP

AJsReef said:
Looking good, how long has it been filled?
Click to expand...

I filled it the first weekend of January. Added salt in the tank and waited a few days for it to clear up. Added fritz turbo start on Friday 1/7.

Also, no fish today. The LFS I'm going to is closed til Wednesday unfortunately.

We have fish! Fancy Ocellaris and a Black Ice. I turned the lights on for about a half hour to see how it looked, but I'll be leaving them off for a while while everything colonizes. I will probably fire up the refugium in the next week or 2 though

Tritium said:
We have fish! Fancy Ocellaris and a Black Ice. I turned the lights on for about a half hour to see how it looked, but I'll be leaving them off for a while while everything colonizes. I will probably fire up the refugium in the next week or 2 though
Click to expand...

looks like you're off to a great start. only things id say is keep just the clowns for awhile. they're a hardy and reliant fish, should fare well with a cycle. also in terms of heaters, sometimes the Eheims just need to be calibrated, however on my 150g system I have 1 300w, and 600w titanium controller, both on an Inkbird. 40 gal sump on a 40 gal tank is big, but bigger is better lol, will definitely give you a good fuge space

Build Thread Just a 40 Breeder Build for the kids