From "Barely Surviving" to "Hopefully Thriving" - a 29G's Road to Recovery

Thought I'd start off the new year by doing a build thread for my 3 year old mixed reef tank to document the progress of the things that I've been doing lately and share my journey of what I want my tank to eventually become. Hopefully I will get there.

The Origin:
I started this tank 3 years ago after converting from 4 years of freshwater. Initially, I did my research, got a RODI, built a sump/refugium, did a proper cycle, started off on the right foot with only FOWLR, a pair of nemos, CUC, and everything was dandy. Slowly, I added more fish, got me a couple of AI primes, and added LPS/softies. Because I had a small tank and a pretty good nutrient export system, my maintenance consisted mostly of 15% WCs every couple of weeks and 30% every month. I know about the other params but didn't really paid too much attention to it because of a combination of life/work/kid/not enough time/laziness. I would test for them once in a blue moon and dose occassionally. So, naturally the tank went thru its ups and downs with a mix bag of survival rates between different livestock. When everything was going great and I kept up with husbandry, my tank would look like this: 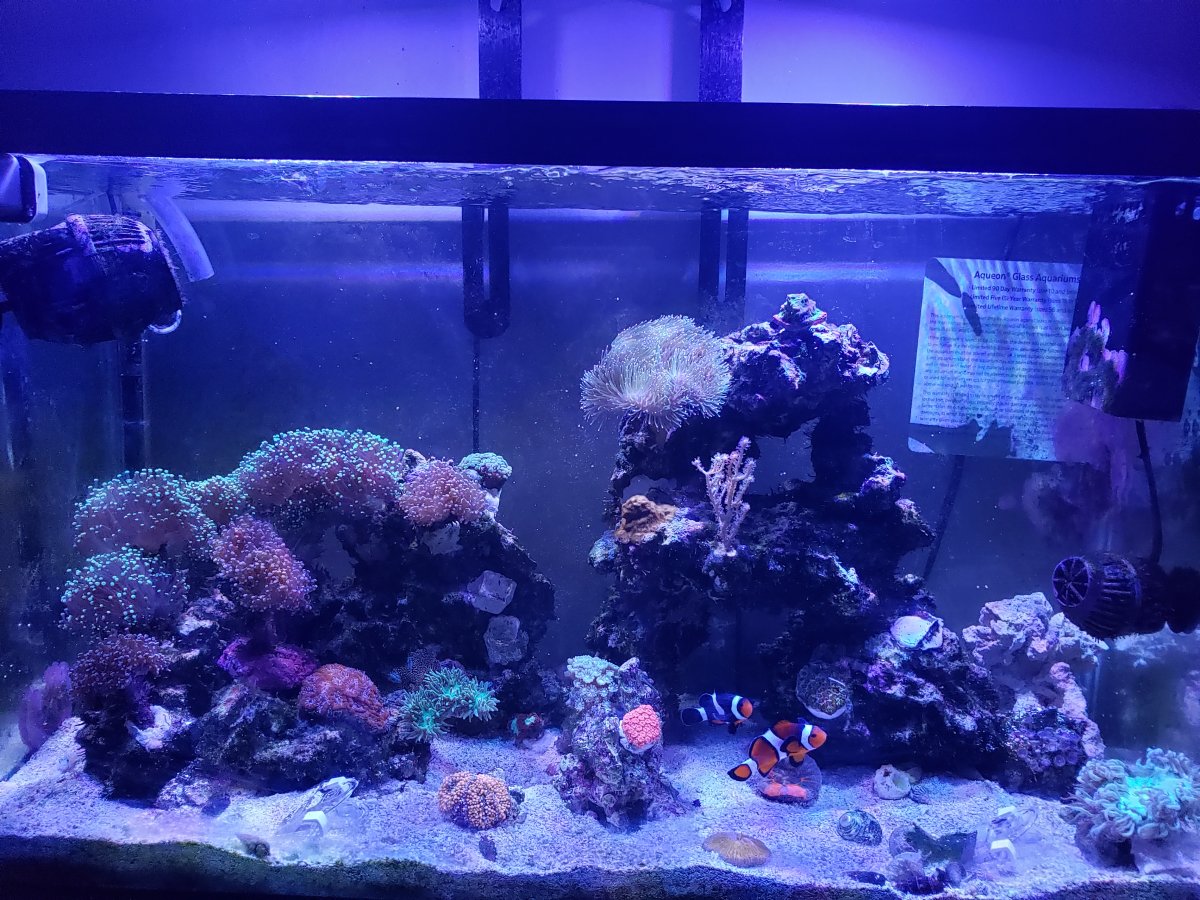 But, more often then not, especially when I got busy/lazy, my tank would look like this: 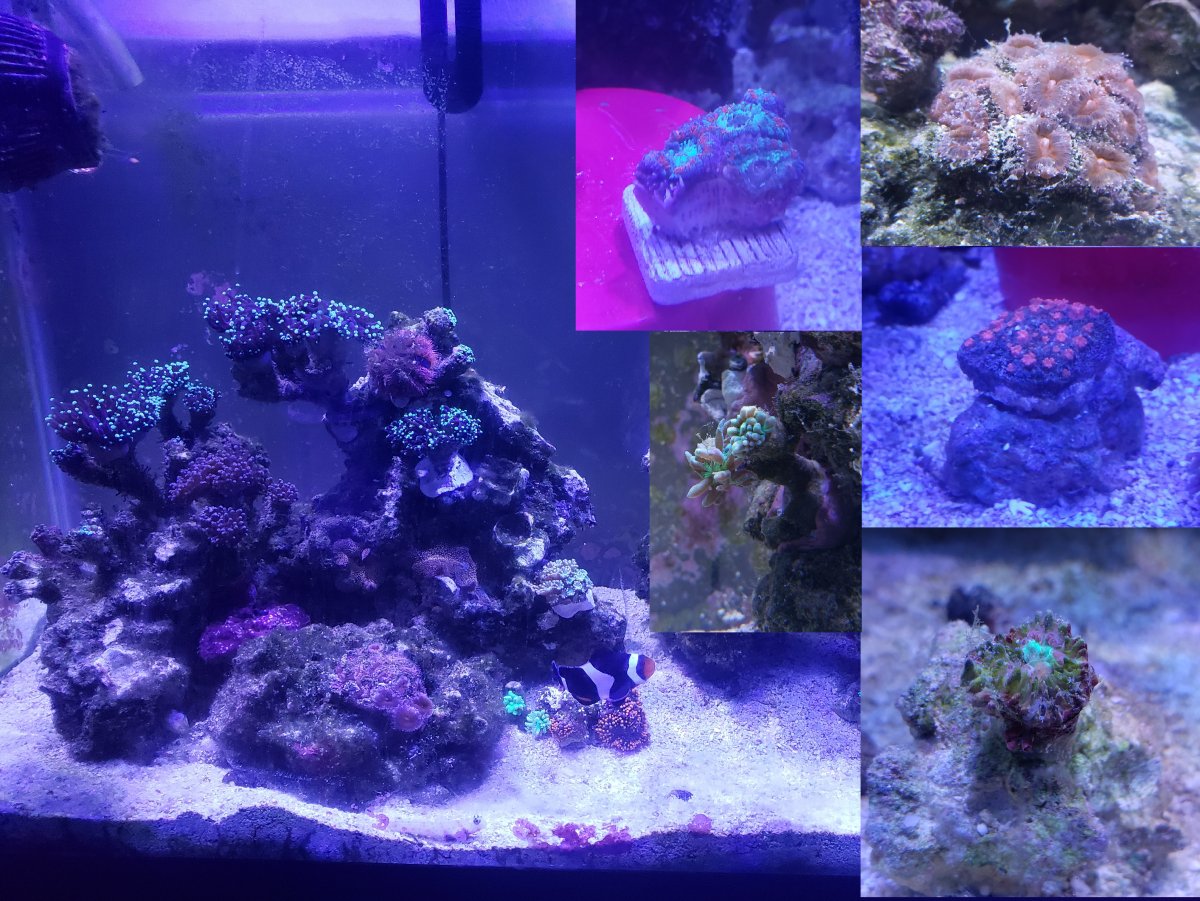 Over the years, nothing really "totally crashed", and things kind of just struggled along. The strong survived and the weak perished. My RIP Memorial wall includes (from what I remember): a YWG, Royal Gramma, Elegance Coral, Scolys, Favites, Favias, Leptoseris (mis-IDed and sold as Psammocora), zoas, plate coral, cleaner shrimp, and a firefish that jumped out of the tank.

The Realization and Road to Recovery:

About 3 months ago, I decided enough was enough, and really started to take care of the tank and see where i could take this tank. I didn't think about doing a build thread then so didn't really keep detailed records, but below is a run down of all that happened:

October: I rearranged rock work and moved the tank from against the wall to perpendicularly next to my sofa to give it a 3 way viewing angel and I can sit on the sofa to enjoy the view - to both change things up and give me more incentive to keep it looking nice. I tested all params and started the processed of correcting stablizing them. Initial params were:

November: Watched the BRSTV video on PH and realized my PH was a big issue. Switched from dosing Bicarbonate to Soda Ash. Also started to feed Brightwell Amino, Restor, and Reefroid. Things started to perk up a bit. The corals that were on decline stopped the decline. started to have a bit of an algae problem from increased nutrient but overall corals showed improved signs of health. At the end of the month I bought a few more frags to spice thing up abit in the tank.

December: All the new additions survived! Encouraged by what I saw, I took advantage of the holiday deals and made many improvements to the tank:
1) Ph was still and issue, so installed a CO2 scrubber, after a few trial and errors, managed to stablize PH at 8.3
2) bought an autodoser to dose 2 part - now my paras are stable daily at 9.5 Alk and 475 calc. Mg i still dose manually with WC, this doens't change much and stable around 1350.
3) Coraline started to grow for the first time in 3 years!
4) Bought an AI Nero 5 wave maker to increase flow for the SPS
5) Bought another Acro frag, a sun burst monti, a neon green stylo and a BTA for my nemos during the xmas sale from LPS
6) Started Vibrant treatment for the algae so took out the Chaeto and turned the fuge to just a sump. Noticed big changes after 4 weeks and now algae mostly are gone except for Bryopsis. This increased dissolved organics in the water that made coral and filter feeders both flourish. Unfortunately this also started an explosion of branching/digitate hydroids...
7) 4 weeks into the vibrant treatment i started a single dose of Reef Flux for the bryopsis.

The New and Improved Current Tank:

After 3 months of TLC, this is what the tank looks like: 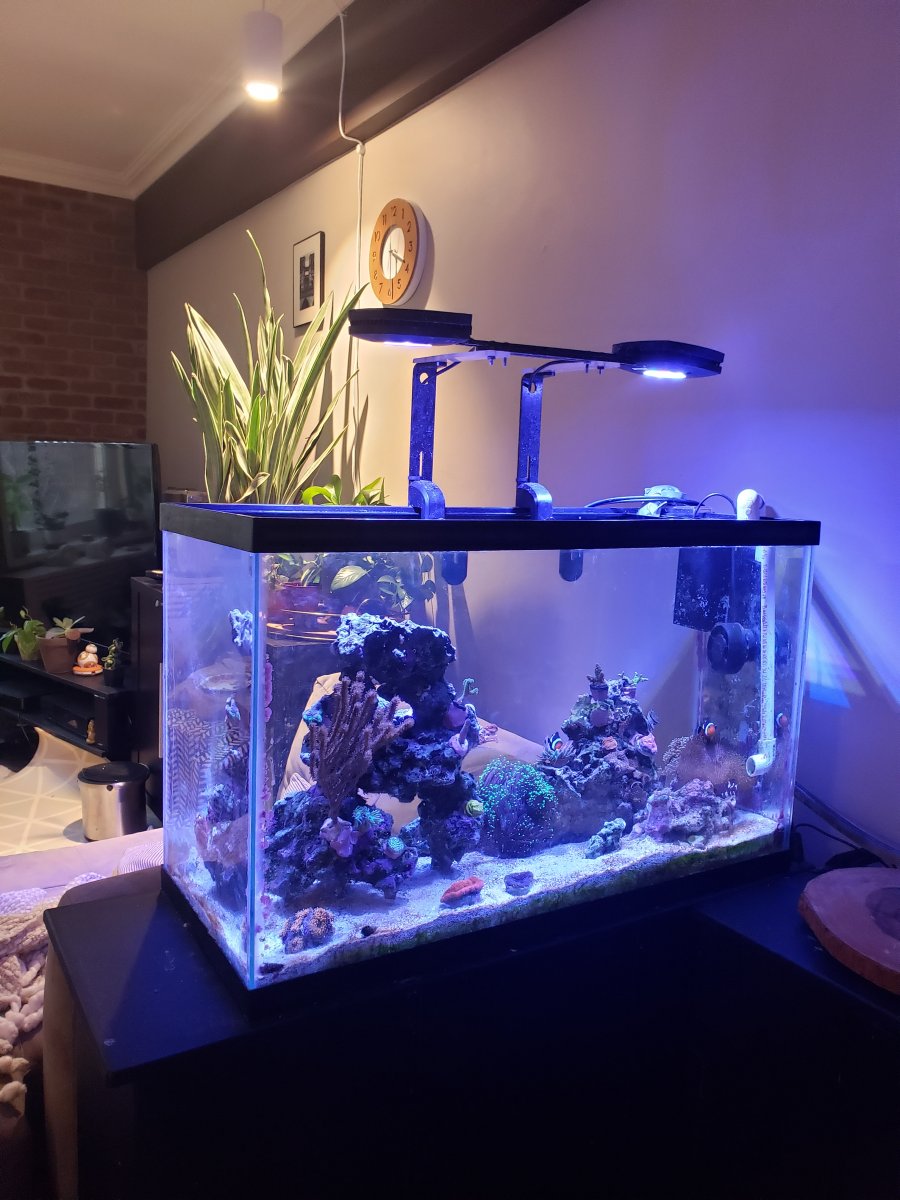 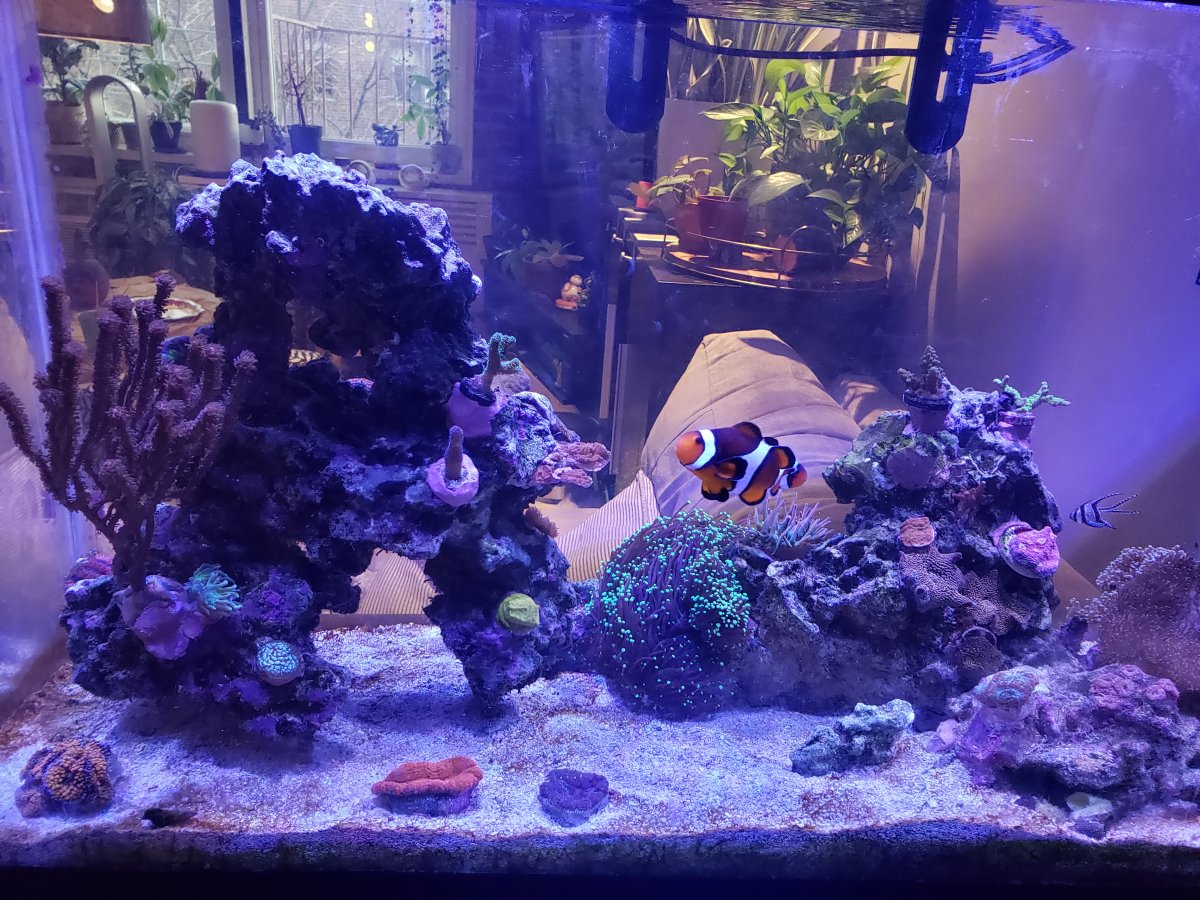 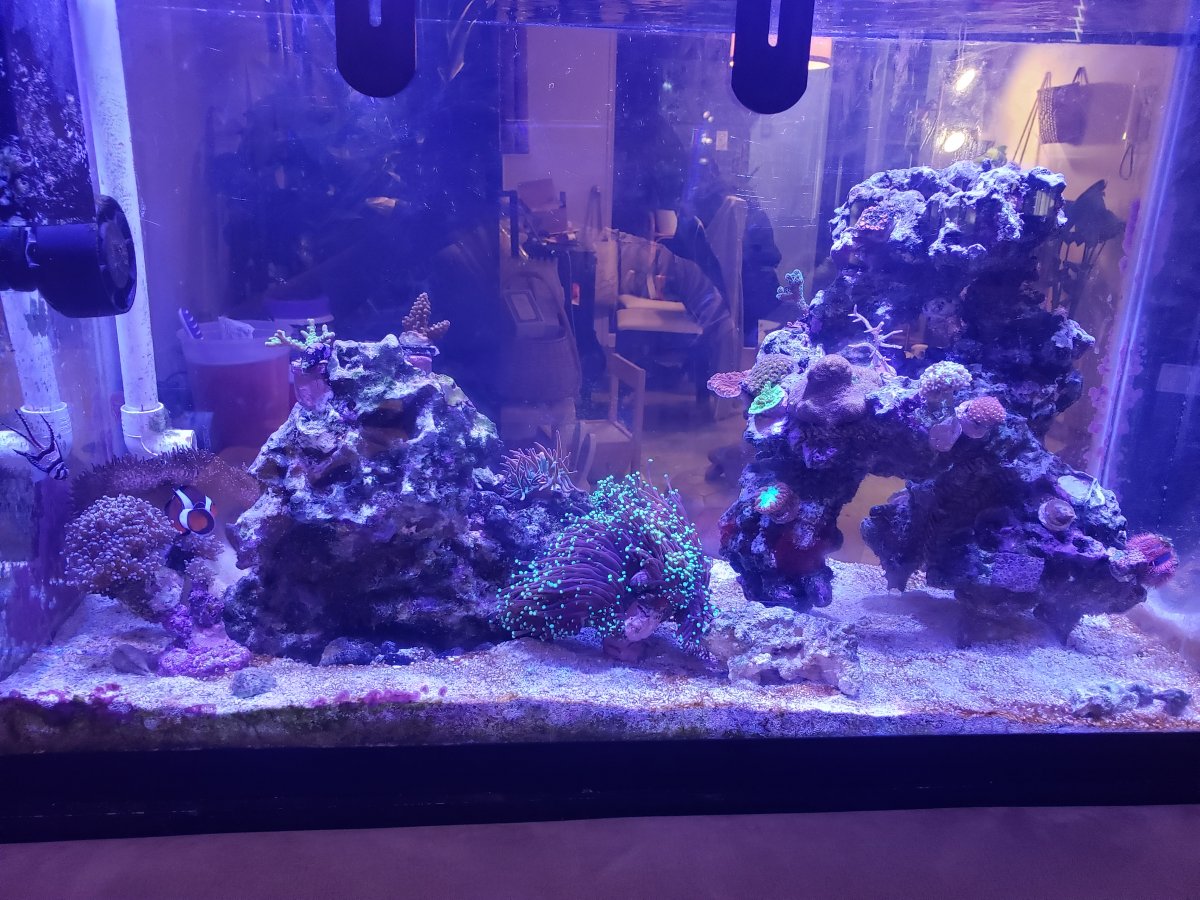 Still some work to do. Currently have a bit of diatom from the vibrant/increased nutrient, not too concerned there it will eventually clear up but the hydroids are a problem. So I stopped feeding the corals for now and added a filter sock to reduce dissolved organics + manual removal.

Reef Flux worked like a charm - my tux urchin used to have a "ghillie suit" of bryopsis that is completely gone today.

Added 5 more SPS frags over the weekend - 1 candlelight acro, 1 light green acro (dunno name), 1 green monti cap, 1 monti digitata, and 1 birds nest. Decided to use the "acclimation" function on the AI prime and glued them directly to the rock, instead of putting everything on the bottom first like I did before. Probably wasn't a good idea, most reacted fine but the birds nest bleached overnight. still good polyp extension so it should recover, still, feelsbad. Guess I'm gonna go back to the proper way of acclimating for the next batch.

Over the coming months, I plan to keep documenting my hydroid battle, future updates, and eventually, hopefully, before/after pictures of the remaining struggling corals and how they turned out.
Last edited: Jan 1, 2021

Bryopsis and algae all gone! Reef flux and vibrant both worked like a charm. I don't think I'll bring my fuge back online bc the old pre- vibrant chaeto didn't make it and I don't wanna spend money to order new ones. My local reef group occasionally have people that give them away so I'll just want for that and dose maintenance vibrant in the mean time.

Still battling hydroid. Manual removal works but they are still growing back. Reducing disolved organics and increasing good filter feeder is still key. So I reduced coral feeding to once a week, added filter socks, and ordered coral snow and more feather dusters. This will be a long term control effort so hopefully I'll see results in the coming months. 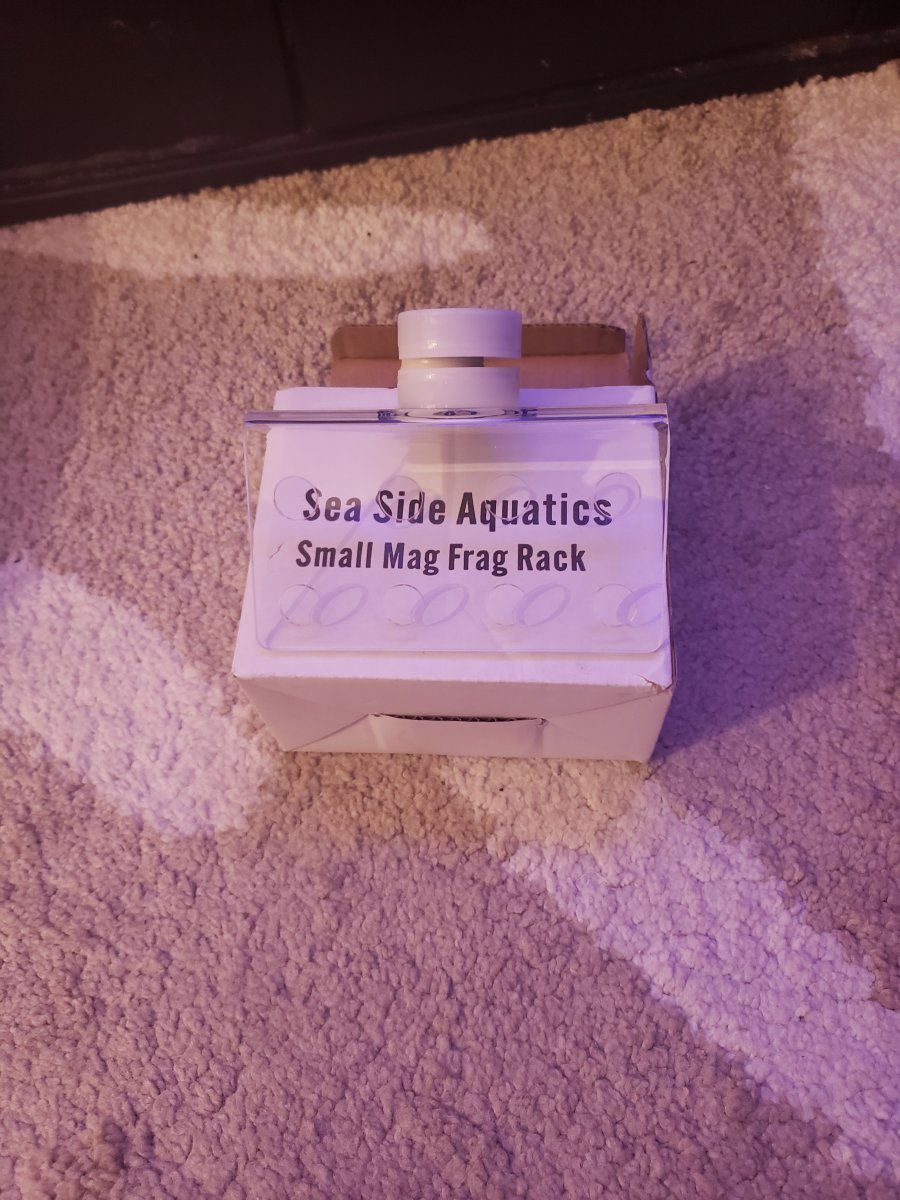 My first frag rack. Looks like solid construction and good quality. Gonna acclimated new frags the proper way going forward now since I can adjust the height of the rack. No more overnight bleaching again like that birdsnest from December!

Until next time.
S

I agree with the fish, Excellent write up.

While an algae refugium may not be your cup of tea, consider your 10G sump as an unlit refugium and add some pods.
OP
D

Subsea said:
I agree with the fish, Excellent write up.

While an algae refugium may not be your cup of tea, consider your 10G sump as an unlit refugium and add some pods.
Click to expand...

Yeah! I do want to turn the sump into a "biodiversity center" .

Its in the DT now but hope it'll eventually cover this rock and I can move some into a bigger rock that I'll move to the sump so it can proliferation in there. Its just hard to make feathers grow (not like you can just buy a fancy light to boost chaeto growth) and i don't want to over feed cuz that ll just make the hydroid situation worse. I will just time do to its thing.

I do see pods in my tank - sometimes they craw on my corals even in broad day light. I guess there's no hard in more? Haven't really thought about specifically growing pods in the sump but from what I've heard I need some kind of housing structure in there right? 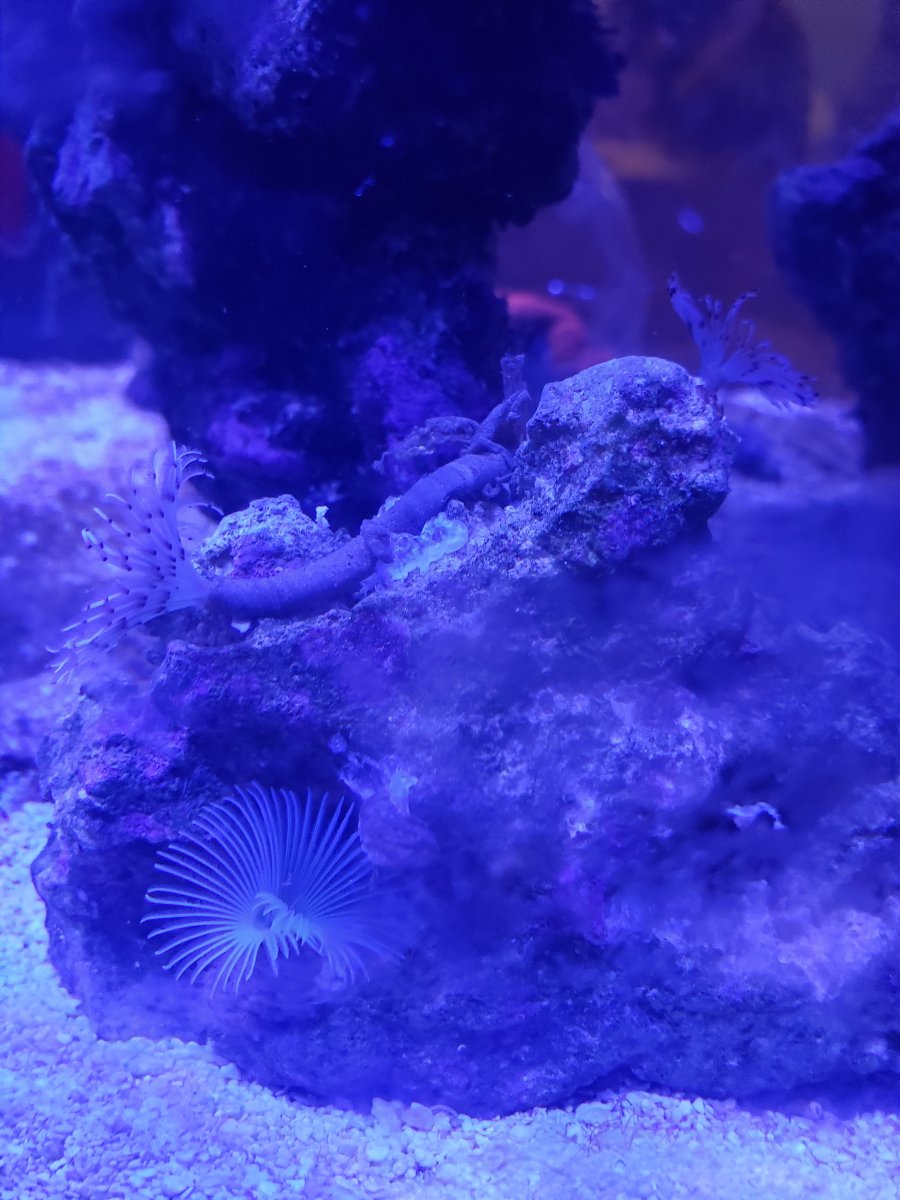 If you have pods in your display tank with fish during lights on, that’s awesome. Pods are excellent herbivores as well as detrivores depending on species.
Structure in an unlit refugium could be eggcrate bundled together. Once biofilms cover surfaces, pods feed on biofilms.

I stopped using filter socks in sumps with a notable increase in all filter feeders. Your feather dusters feed on bacteria and larvae of detrivores. Allow that to take place in your sump.
OP
D

Will give it a try in the egg crates.

Still going back and forth on the sock. I get that the stuff that the sock pulls out are "filter feeder food". The challenge for me is I want the good filter feeders to eat them but not the hydroids, which of course is impossible to do. I'll leave them on for a few more weeks to see if it makes a difference with controlling hydroids before I stop with the sock experiment (or maybe ill just get lazy with cleaning them every 3 days )