Well, I've gone and done it! I've had just about enough of a nano tank, and learned the lessons (mostly the hard way) that accompany such a small tank. Now's it's time to move into something a bit more fitting of the space I have available and the stock list that I'd like to keep, my "new to me" RSR XL 425. Been looking into getting a larger tank for a while, but needed buy-in from the "ties that bind", aka "the wife." But, as I think I'm pretty lucky on that end, it really wasn't much of a fight as I think she's gotten just as much out of watching my son and I work on the nano tank as I have working on it. Only down side was that I need to rid myself of the other tanks I have in our living room, so I'll be needing to move over all the livestock/live rock/sand I currently have into the new setup.

Ecotech Vectra S1 (debated this one, but since I don't plan on running additional equipment off the return, this should do. Will probably regret not upsizing, though.)

IceCap ATO (Currently installed on my 130D) (Since the 425's ATO container is unbelievably small, I plan on running an additional 5g reservior in the chiller area for now, until that area becomes too cluttered and then I'll get a 10g reservoir and move it outside the stand. Thinking about using the RSR reservoir as a fuge at that point, but we'll see.)

Ever get the feeling you're missing something? I'm having a serious case right now, so if you all think of anything that's glaringly missing let me know. This will probably be a very minimalist build for now, so probably no dosing or running reactors until I see exactly what I'll need for my setup to run efficiently. Looking forward to hearing what you guys/gals think. Thanks! 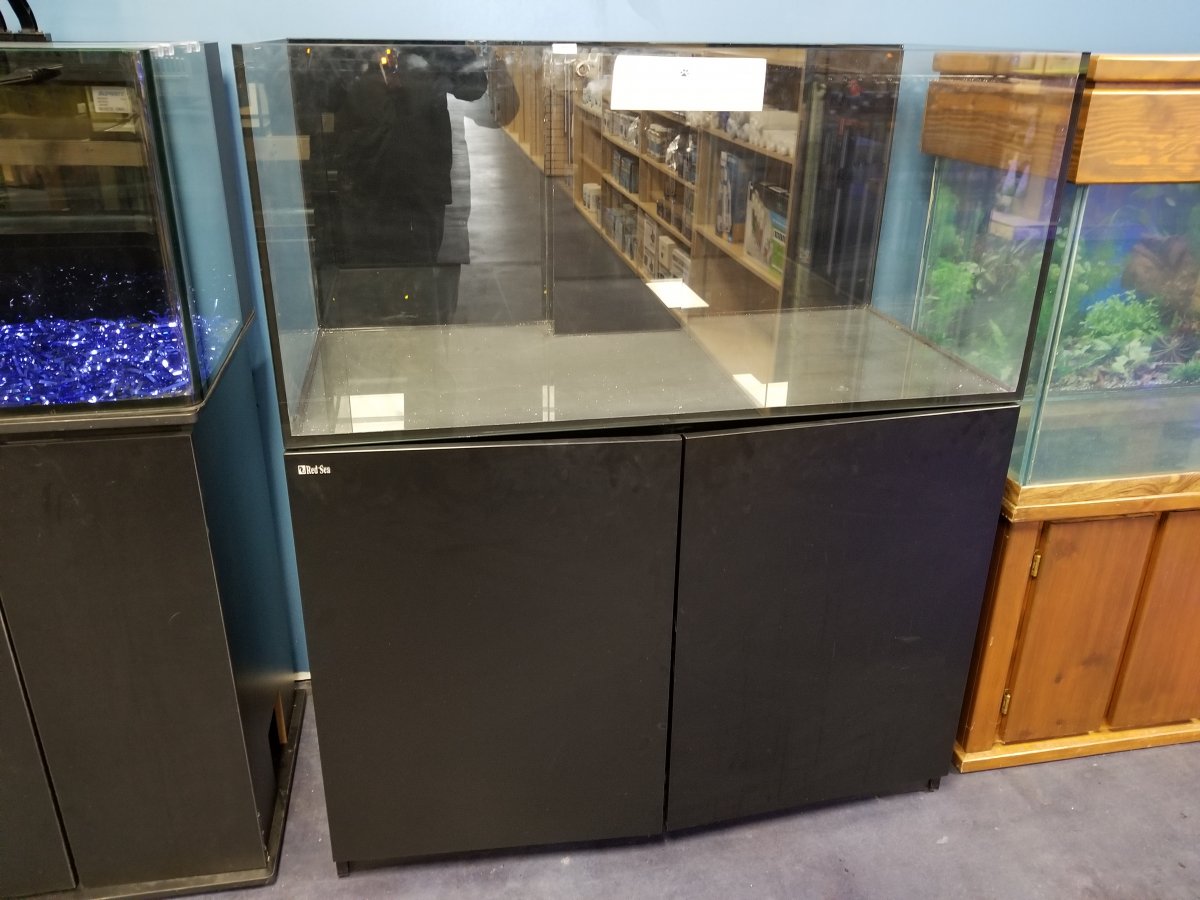 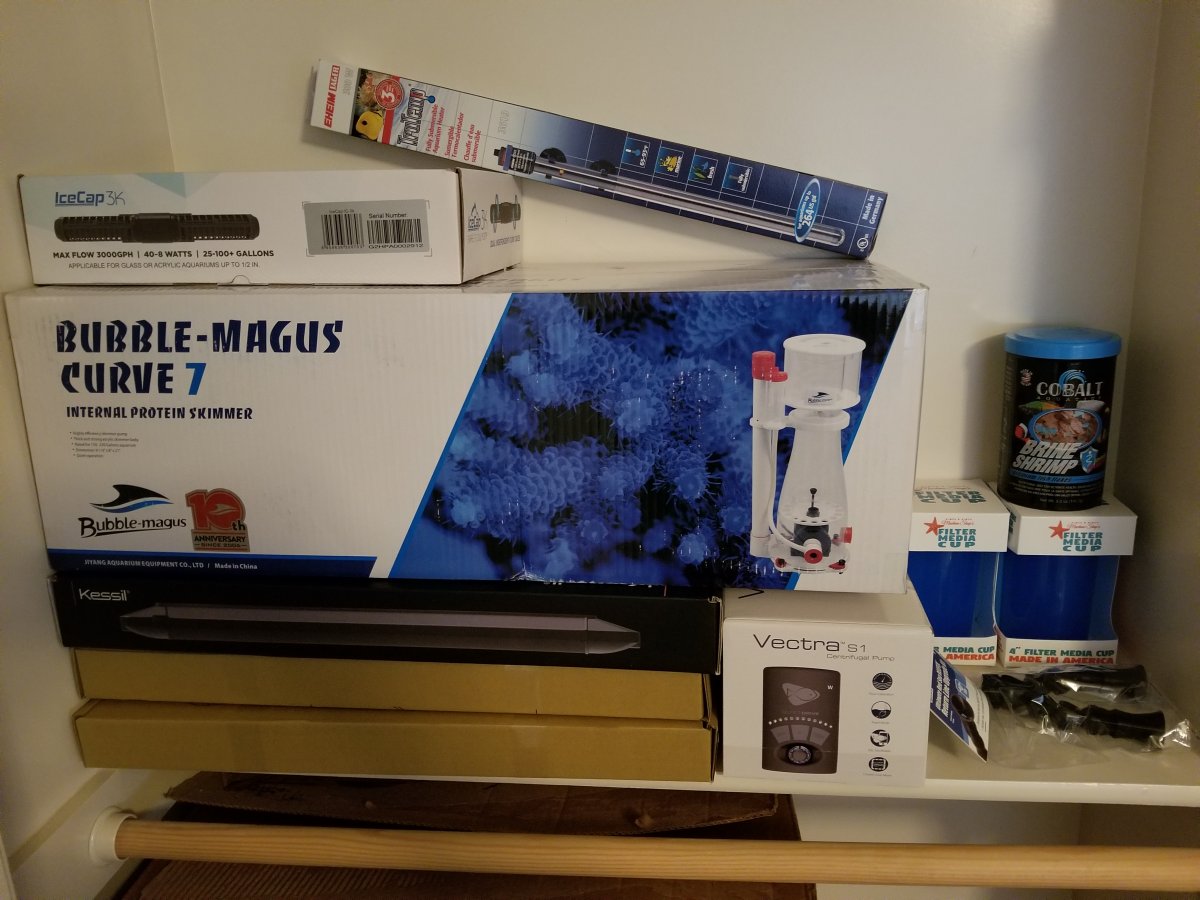 Now, if someone would be so kind as to tell me how to add a link to this thread into my signature, that would be awesome. Gave it a try as you can tell, but didn't work.

-Nevermind, figured out that I need to be a supporting member to do this. Thanks.
Last edited: Dec 31, 2017

Nice Tank think I seen it at pet topia
OP

Yep, just couldn't pass it up... Merry Christmas to me lol

ethridge78 said:
I was going back-and-forth if I should buy or not went back to buy it and it was sold so I bought the cadlights next to it lol
Click to expand...

After talking to Chris, I knew it wouldn't last long up there. By the way, I wish I was further along in my build... might have had to take that GHL doser off your hands Figure I'll need to go down that road eventually.

following along! I too gave myself a christmas present this year and ordered a 350 deluxe. Will be attempting one of these build threads soon.
OP

Whats the saying?... Idle hands are the devils' workshop lol? Since I'm currently waiting for my LFS to bring my tank out, I decided to return the Vectra S1 pump and get the M1. I know I may not need it now, but it'll be nice to have that extra horsepower if/when I need it. I've just seen too many cool looking manifold designs and upgraded gear to not be able to access said horsepower if I want to do something along the lines of adding reactors, changing out the ATO for a refugium, etc. Rather have it and not need it, then to need it and have to go buy a new pump.
Also went out and bought a "DJ-style" control center/power strip and some HD double-sided tape to mount it to the divider wall in the stand. Should make doing maintenance a bit simpler and provide ease of access to just about everything. https://www.amazon.com/gp/product/B000GASJF2/ref=oh_aui_detailpage_o00_s00?ie=UTF8&psc=1
Last edited: Jan 8, 2018
OP

Well, finally go the tank delivered 2 weeks ago and everything went about as smoothly as I could have possibly hoped for. Only lost a few tank mates (sandsifting star/hermits/snails) in the transition to the new tank, but suppose it could have been a lot worse. Used Aquavitro Seed to cycle the tank quicker, since I was moving all the inhabitants, and even placed all my old live rock in the sump to help speed along the process. Plan on gradually removing the live rock, bit by bit, as I do my water changes. Not totally thrilled with the look of the rock-scape, but it's not glued (yet) so I'll still have time to maneuver things around. What do you all think? 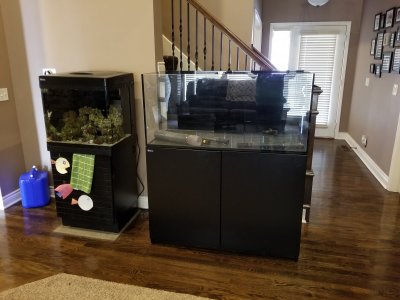 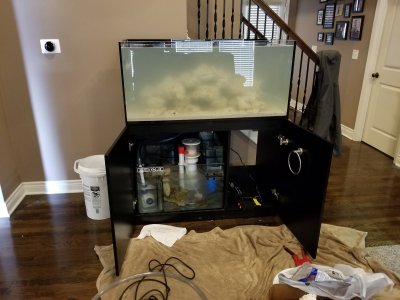 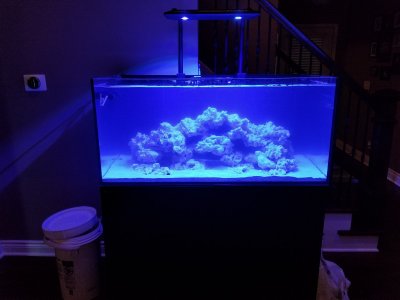 Did a quick preliminary layout for all the equipment, but after letting it soak in for a few days, I decided to run out to Ikea and buy a cabinet (pics to come). Figured this was a much better idea than having all that electrical equipment near all the water 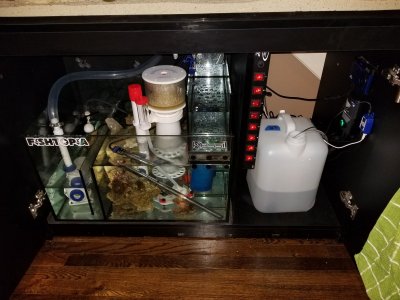 Anyway, what do you all think? All parameters are stable (zero ammonia/nitrite and 0-5 nitrate) for the entirety of the 2 weeks. Only thing I got was the typical diatom bloom, which the cleanup crew is slowing taking care of, along with the typical die-off.

Figured while I'm waiting out the "Joe's Winter Fest Live Sale" that I'd at least do a quick update on my tank. Everything seems to be doing really well, and have added a trio of lyretail anthias. Not much else has changed, though. Just planning out my next purchases (fish and coral). Toxic green anemones keep moving on me and was thinking about just removing them and trading them in. Fortunately enough, though, the RBT hasn't moved an inch since I placed him in the tank. Must have just been happy to get out of the sump. Had to break the rock he was in, as he was too far inside it to get a turkey baster to. Just slowly chipped away rock until I could see part of the foot.

Just a few pics from a couple nights ago. Things are moving a bit slower than I'd like, but there's at least progress. Lowered my AP700 to 12" above the water surface and running at 60% max. The few SPS frags I got from the Joe Knows Reefs sale seem to be responding well. I don't plan on having too much of anything growing at the max width of the tank, so that's why I lowered the light.
I did get a new lid from Artfully Acrylic, but had a lot of issues with them. When I first talked with them, they seemed nice enough and attentive. I sent them dimensions for the tank and include all the cutouts for the lights/cords/etc, which they reached out to me to verify since I wrote a few of them down wrong. They said they would update my sketch with the correct numbers. Unfortunately, who ever did the programming to cut it out used the old sketch instead, so I received the lid a few inches bigger than needed and the light cutouts weren't the size that I asked for them (needed to be 2 1/2", instead the sent 2"). Immediately got them on the phone to mention the error with the light cutouts, at which time they pointed out to me the lid was cut incorrectly and even admitted the issue was their fault. The biggest problem I have is that I paid an extra $50 for expedited processing/shipping, which they told me would be a 2 week turn around. I did receive the original, incorrect lid in just over the 2 weeks promised, but it took them another 4 weeks to get a new one out to me. Needless to say, I reached out to them for a refund of at least the $50 fee, but have yet to hear back from them, so I opened a case with PayPal to at least get the ball rolling. They have been super difficult to get hold of since not sending out the correctly sized lid, and have actively dodged my phone calls and have instead sent text messages.
On another note, my anemones are not liking the tank so far. I know it's not a great idea to add an anemone to a tank less than six months old, but had my fingers crossed since I had to move them in when we did the tank swap. Needless to say, my single toxic green BTA has turned into 3 that are constantly on the move on the left side of the tank, and my Rose BTA has slowly shriveled up and is on the move, as well. The greens at least look healthy, but the rose looks like it is barely hanging on and does still react to food. If anyone has any advice, let me know. Thanks. 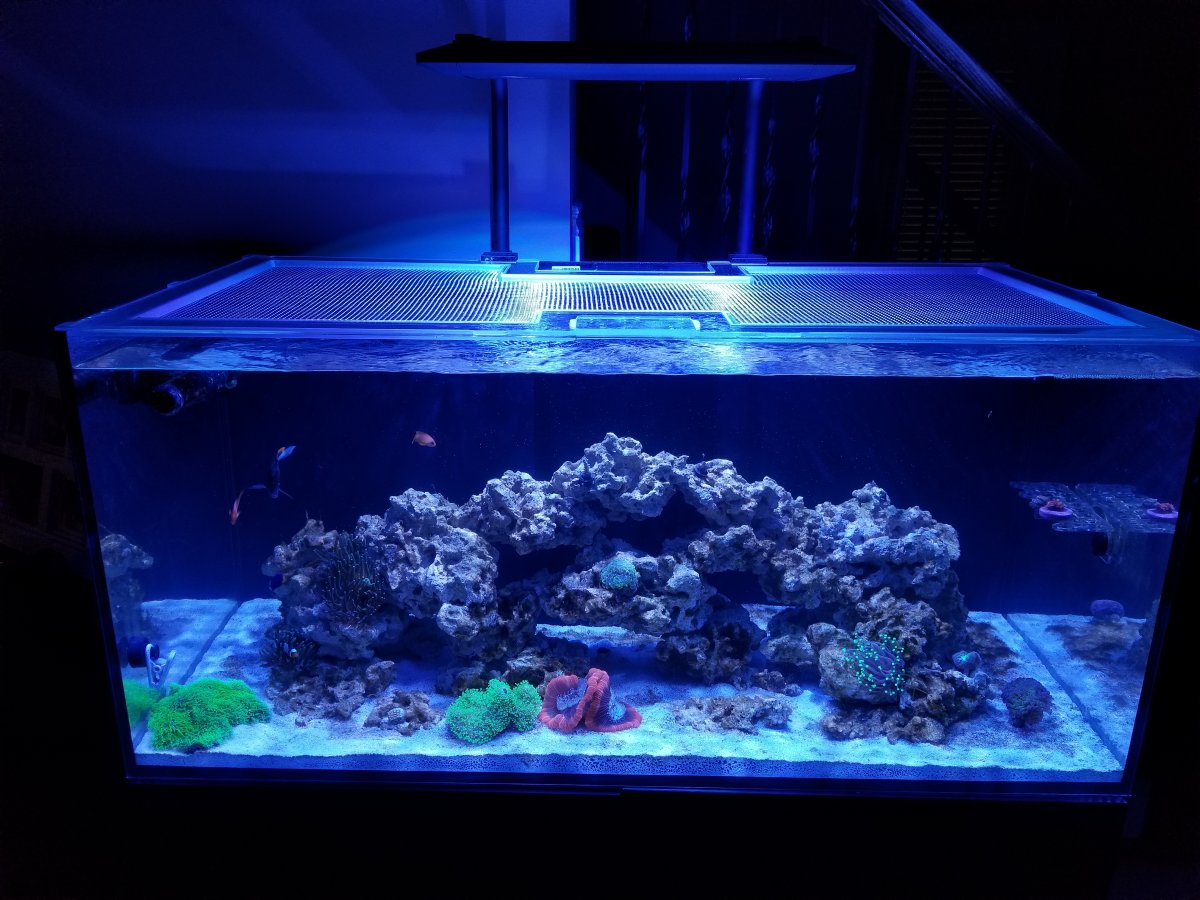 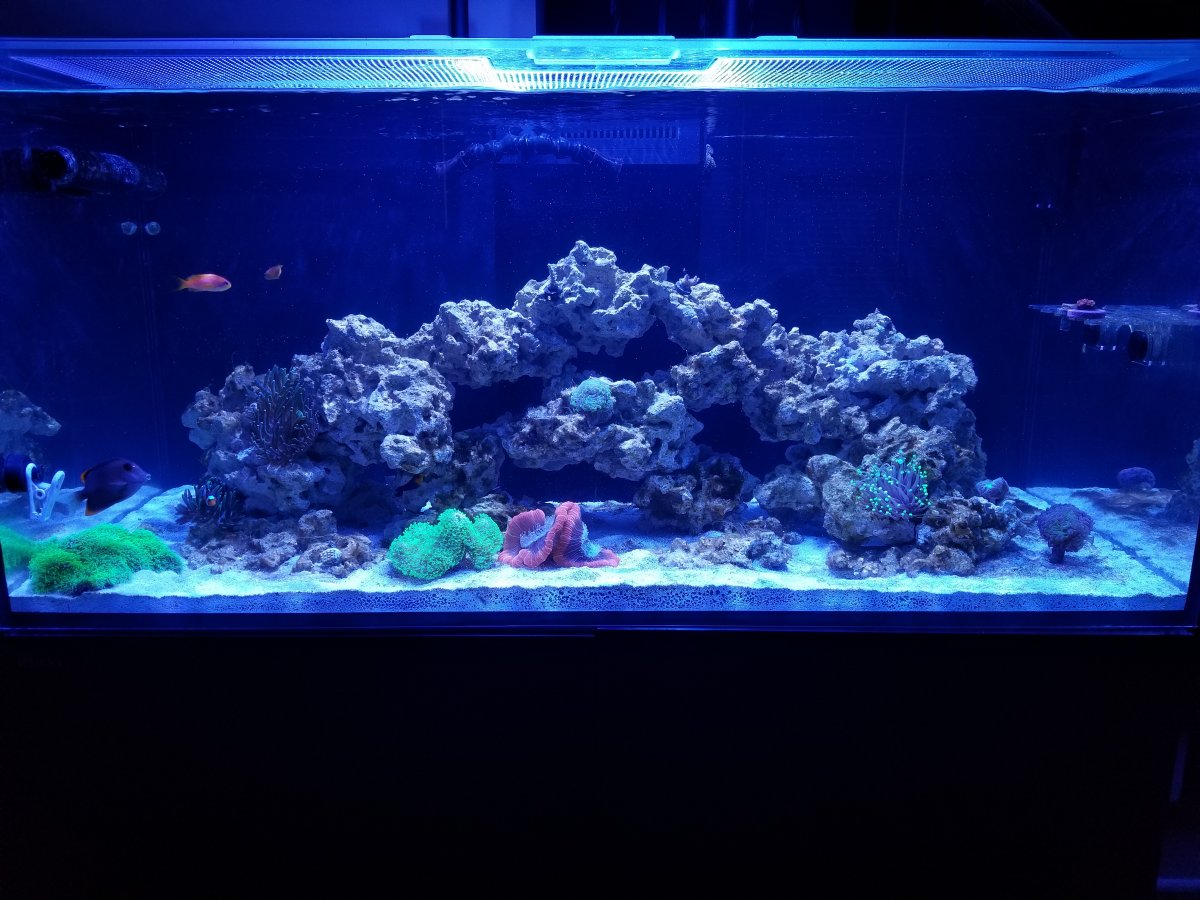 Made some additions to the livestock list over the weekend.

The only one of the group I'm really worried about is the Cleaner Wrasse. Read that they are super difficult to keep in a tank since they have such small mouths and seem to be finicky eaters. I have put some of my pellets in an old, all plastic, pepper grinder to hopefully get it small enough for him. Guess we'll see. He's only been interested in the brine shrimp, though, so far. AT this point, none of the fish seem to be all that enamored with the spectrum pellets I have, so I think I'll have to change it up and go with something else. I've even soaked the pellets in garlic prior to feeding to no avail. Right now I feed a mix of brine shrimp flake, a omnivore flake (forget the brand), New Life Spectrum Pellets, Hikari frozen brine shrimp, LRS seaweed and LRS Reef Frenzy Nano. Any suggestions for pellets, or anything else in the dry food category for that matter, to try would be awesome. There's so many choices, hard to pick just one.