How much do you care about PAR and how are you measuring it?

It took a while for me to figure out, but knowing PAR has allowed me o put the right corals (SPS, LPS, Soft, & Clam) in the right spots. I struggled for several years with lighting, on my way to killing $100s of coral along the way.
I bought a Neptune PAR meter before BRS was renting them. Glad I have it, but it is an expensive accessory that I have only used 4 or 5 times. Also, as the APEX goes, it doesn't give immediate results as with the Apogee, instead updating every minute or so which makes it a little cumbersome to use.
That said, with the PAR meter and a BRS Investigates on Kessil A360X with the narrow reflectors, I figured out my A360 NEs (3 x w/ Aquatic Life Hybrid T5s x 4) were mounted way too low, around 5-6". I raised to 13" per the video and re-mapped PAR. In the end I think I had hot spots and low spots that were not getting filled in because of the narrow beam. Since then, about a year ago, I've had no coral mortalities and everything is thriving in my mixed reef.

So I consider both PAR and PUR. And using these values, I've also been able to find really good growing cheap 6000K LED lights that do well to grow frags and corals and my anemones. Which lead to another discovery / observation : it appears that after putting my corals under 6000K utility lights with good PAR/PUR levels, they not only grow well, but when put back under my AI HydraHDs, they appear to have richer colors than my Corals that always remained under my AI Hydra HDs (and same water supply across tanks; so it's not the water).

ca1ore said:
I can easily eyeball my tank (or any tank, frankly) and know that there is too much or not enough light - I think all seasoned reefers can.
Click to expand...

Call me an amateur but I have never used one. I have a mixed reef with only a few SPS. I didn't have a thousand dollars to spend on high end lighting like Kessil, however I do have good quality lights. All my corals have good color and growth. When I buy a coral I have a pretty good idea of it's light needs. I put it in the tank where I think it will get the right light and flow. If it's not doing well I move it up, down or sideways until it's happy. I think you have to do that anyway even if you have a meter. Sometimes the science can drive you nuts. I just enjoy my tank.
Last edited: Feb 17, 2021

Yes, the former. I lay no claim to any freakish visual skills LOL.

I care enough that I bought an Apogee 510

ca1ore said:
Yes, the former. I lay no claim to any freakish visual skills LOL.
Click to expand...

What kind of lights? How do you set up new lights? I can tell you I went from cheap black box to photon v2+ leds based on "look".
Turned out the v2+ was running 150 par more intense than the cheap black box.
I also let my corals tell me how they like it and its working so far as one size definitely does not fit all.
Highly reccomend especially changing lighting and system for sure use a par meter.

LRT said:
What kind of lights? How do you set up new lights? I can tell you I went from cheap black box to photon v2+ leds based on "look".
Turned out the v2+ was running 150 par more intense than the cheap black box.
I also let my corals tell me how they like it and its working so far as one size definitely does not fit all.
Highly reccomend especially changing lighting and system for sure use a par meter.
Click to expand...

Not sure I really follow the point you are trying to make .....

I suppose one could make the argument that novice reefers don't yet have the necessary skills to eyeball their lighting; though I am not sure that I'd recommend a PAR meter to somebody new to the hobby LOL. Far better ways to spend $$.

With my lights, 250 watt de 14K phoenix in lumen bright reflector.
I have never checked par but have read exstensively before firing them up what par shoud be at 14" from the surface.
They replaced 8T5's that were 4" off the surface with no ramp up.
Growth has been noticeably greater since the switch.

ca1ore said:
Not sure I really follow the point you are trying to make .....

I suppose one could make the argument that novice reefers don't yet have the necessary skills to eyeball their lighting; though I am not sure that I'd recommend a PAR meter to somebody new to the hobby LOL. Far better ways to spend $$.
Click to expand...

Honestly I thought the point I was making was crystal clear. I reccomend par meter to anyone setting up new lamp to use a par meter and get familiar with said lamp and new powerful leds.
I asked you what kind of lights are you using was just curious is all. Guessing something your super familiar with and most likely been using a long time. Def wasn't trying to put you on spot just think people could learn.
I gotta say though your on absolute God status in my eyes if you can come over and tell me where my par is reading under my lamp under my new photon v2+.
Realisticly if I had those powers I'd quit my job and rent myself out to reefers dialing in lights and probably be doing alot better off.
T

revhtree said:
Back in the day we never measured lighting PAR. We looked at how the coral was doing and either moved it up or down in the tank. I Got a suggestion from a member that we should ask about PAR and measuring PAR so let's talk about it today and how much you consider it!

From World Wide Corals: What is PAR? Photosynthetically active radiation, otherwise known as PAR, is roughly the number of light particles penetrating the surface of the water and saturating your tank. These particles supply photosynthetic organisms such as corals and plants with the energy they need to break down sugars, produce food, and cycle toxins out of their bodies. As such, they’re key to maintaining the health of your tank inhabitants and keeping the ecosystem in check. However, you must regulate the amount of PAR you allow in your tank to ensure your specimens are neither over- nor undersaturated with light. This is why reef tank owners often use PAR meters during the building process to find the proper light range for their specific aquariums. Read More Here

1. How much do you really care about the PAR values in your reef aquarium?
Click to expand...

revhtree said:
2. If you do care then how are you measuring your par values
Click to expand...

I rented a par meter from my local LFS 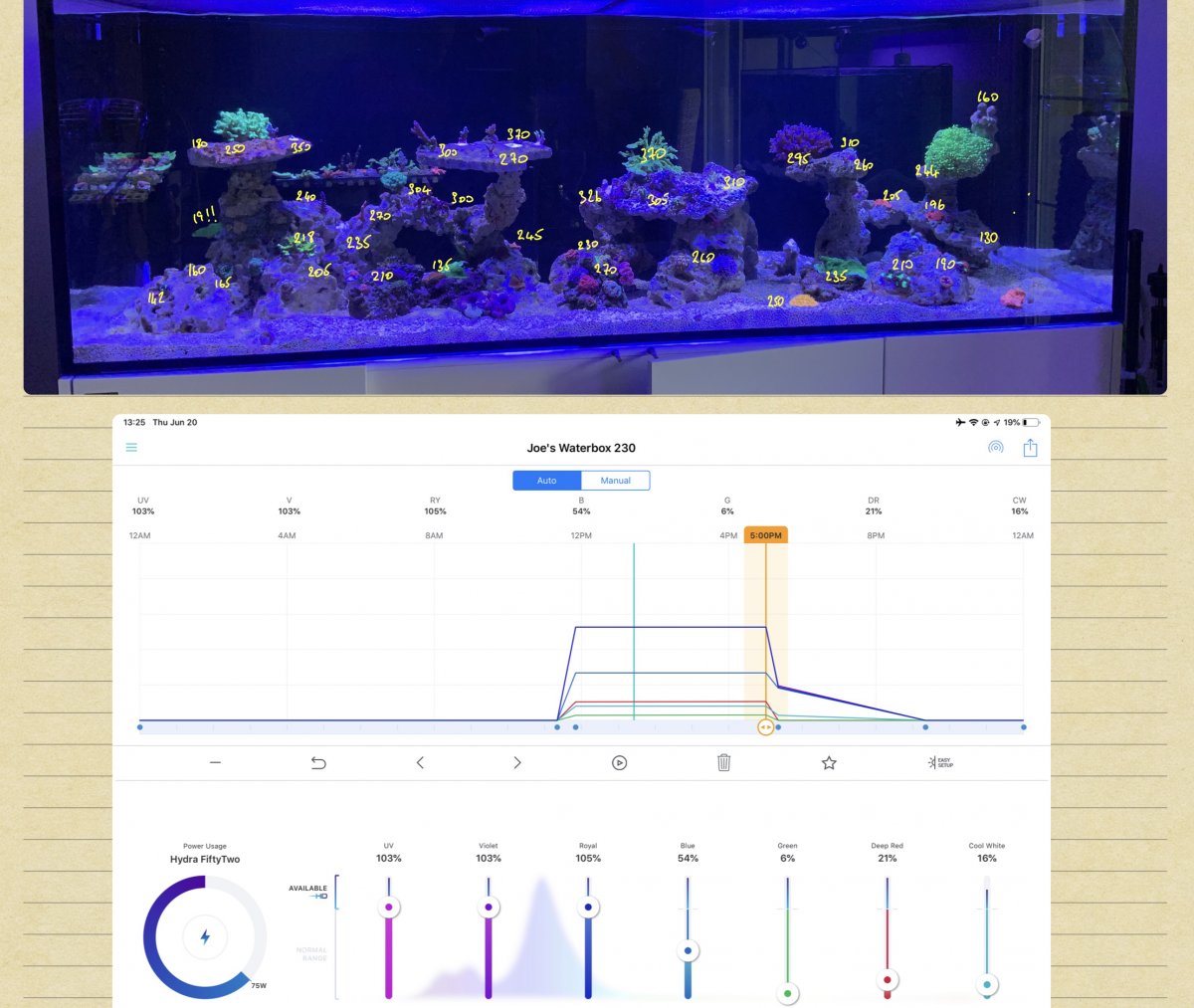 Only PAR I am concerned with is on the Golf Course.

I picked “other”. I’ve never checked it but I want to sometime. My first tank didn’t have adjustable light so I didn’t bother. My new tank does so I would like to check it out. I can’t say what I would do with the results though. Coral health is the real judge I would think. I hope to learn a bit from this thread though.

I just put the coral where they do well. No need to get fancy.

ReefKeeperElite said:
I just put the coral where they do well. No need to get fancy.
Click to expand...

Same here. If it doesn’t like it’s spot, I move it somewhere different.

PUR is less important than PAR when using LED lights designed for reef aquaria and I have statistically significant data to prove the point. PAR is important since an over-illuminated coral can bleach - appear 'normal' - and the eye cannot perceive this. Beg, borrow, or steal a PAR meter. Many corals need only 200-400 PAR to reach photosaturation.
5

never have measured use metal halides with T5,s.

My tank is 24 " deep and running radions for lighting. I ended up buying a par meeting to ramp up the light high enough to keep clams but also monitoring levels higher in the tank to avoid burning sensitive corals.

What PAR meters do you guys rely on? Is this something every serious reefer should buy?
2 3

How fast do you increase PAR?

How much PAR do you give your soft corals?