How to repair an Orphek OR2

So I have a pair of Orphek OR2 90's, with almost all UV bulbs. Not too long after running them, they both failed. I assumed it was the power supply, and tried to replace it (hint, Orphek won't sell you a powersupply). Turns out that wasn't the problem. The problem was this: 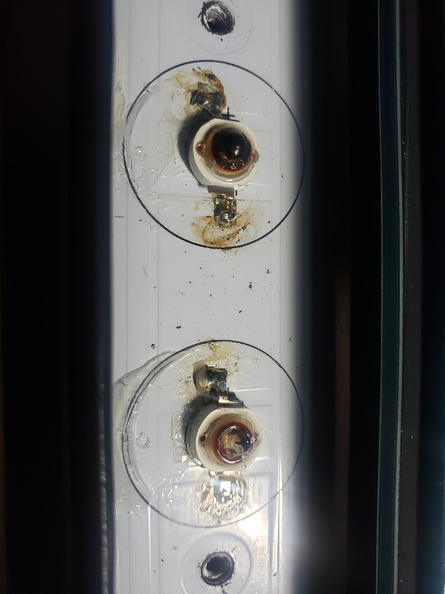 So this is how you fix it, because you refuse to spend another $300 on new ones.

First, head on over to Ebay. Look around for 3W Epistar LED's. My OR2 was a special order UV setup, so my configuration was:

So I managed to find someone selling both types of eggs without PCB (you want just the plain chip, no PCB mount!) in 50 packs for about $20 each. Took about 3 weeks to arrive from china.

This is the best looking LED from the strip, next to a brand new EpiStar (new on right): 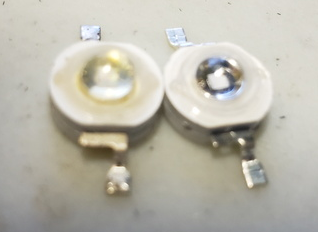 Now, you need to disassemble the light. It's a little fiddly at first. There is a long acrylic window across the whole strip held in place with 3 screws, and then there is an end cap on both sides. One side has the power cord coming in, ignore that. Start by taking off the 4 screws on the other endcap. Then remove the 3 screws on the acrylic. Once you have all the screws out, remove the end cap, and then slowly pry up the acrylic. It's held in place quite well with some black silicone, so it's really terrifying to remove, because it feels like it's going to break. I just very slowly worked my way down the length pulling up on it as I went.

Sadly in my case, there is a tiny bar in the center, that is used for the middle screw, and this little bar broke off while prying it up. It's not critical, but it was obnoxious.

Having exposed the strip, now we have all the little lenses. These were held into place with just some silicone, so they were really easy to snap off and store in a little box for the time being.

Now all the lights are exposed, and you can see the damage. In my case, all but 2 were fried to a crisp. I decided to just replace all of them. You need to desolder every single one. Yes, it's obnoxious, and takes forever. This is the first time I ever did a desoldering project this large, and worse, one where I cared about the board being ok when done. I watched a "Great Scott" video on youtube about how to desolder, and it was really helpful. His hint is that you want to *add* a tiny bit of solder, and when you do this, it causes the existing bead to melt, making it easy to remove. I used a small pair of tweezers, and pushed sideways, or pulled up on the star, while applying heat with my iron, until the lead disconnected. Then I moved to the other lead. After I removed each one, I cleaned off the thermal paste from the pad, and cleaned up the remaining solder by carefully wiping it away with the iron. Also be sure to scrape off the silicone from the lenses as best as you can. I used a small plastic tool so I wouldn't damage the board. Total time to desolder all 36 is about 3 hours. 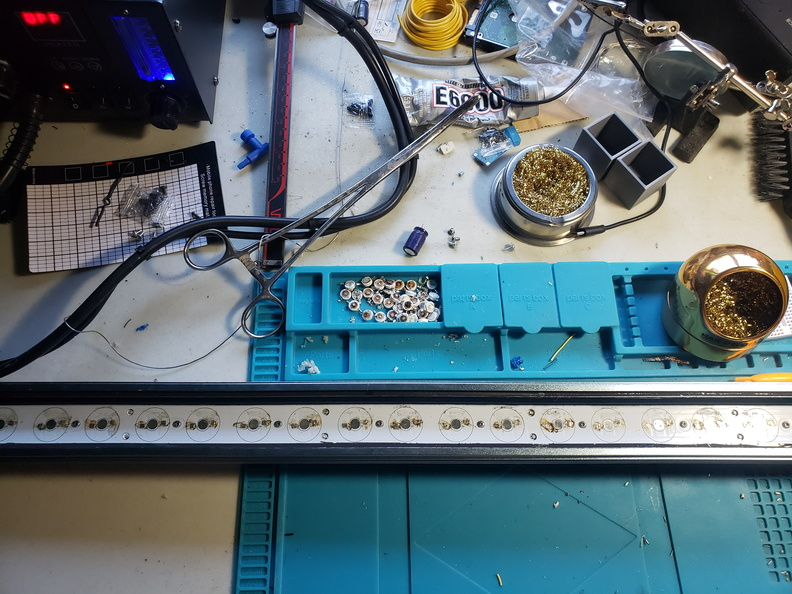 Now all you have to do is solder each one in, one at a time. Put a tiny bead of thermal compound under each star as you go, to aid in the cooling of the LED. As I went along, I used a small AA battery pair (in one of those little battery holder clips with wire leads) to test each LED before I soldered it into place. The LED's are approximately 3v LED's so you want to use something with 3v or less to test. It also helped me confirm what the + and - side is for each one. If you very carefully look at the leads, there is a tiny + on one lead, and a little - on the other. It's nearly impossible to see, but it's there. I also wrote down the configuration I wanted for the LED's on a slip of paper, and then crossed each one off as I went, so I didn't lose track of what I had done, and where I was.

Now with everything soldered, you can power it up to see if it works. Mine worked on the first try. If you have an issue, use your little battery to test your solder joints. Check from the + lead of one LED, to the - lead of the next LED, this verifies the connection. Walk down the strip alternating like this, so you test all the connections. Hopefully you should find your bad joint. 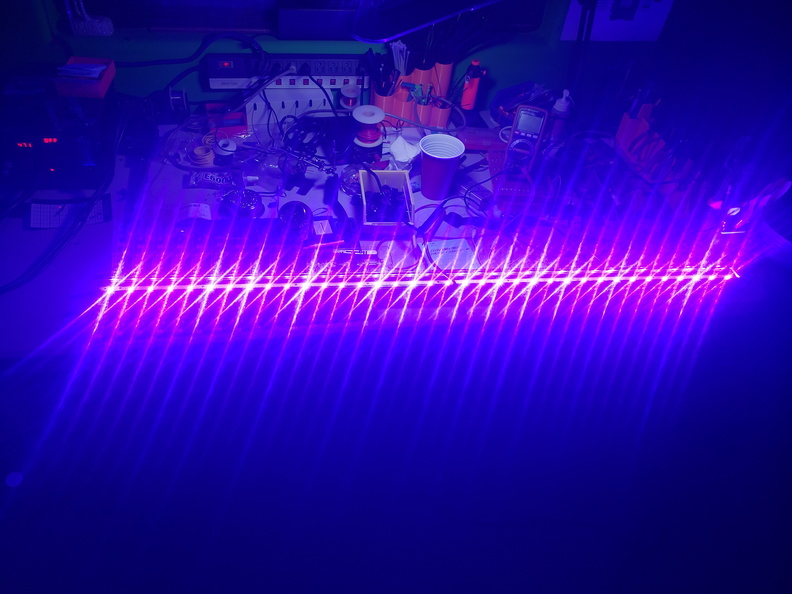 I used a little bit of E6000 (just a tiny drop) on each lens to glue it to the board. They were really easy to reinstall. 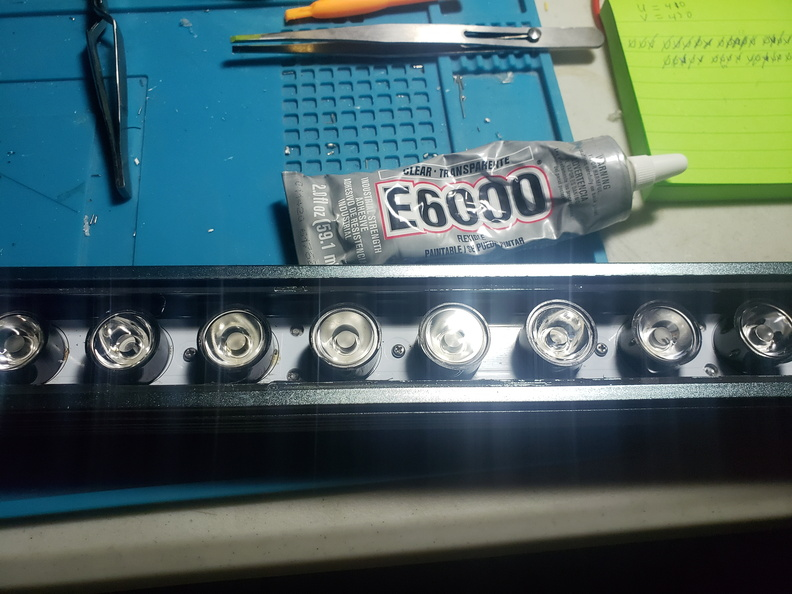 After reinstalling, I tested again:

Darn. I think when I was installing the lenses, I knocked one of the solder joints free. In my case, I left the unit powered on, and fiddled with each lens on the dark half, until I found one where if I shook it enough, the whole bar would light up. I turned it off, and found that solder lead had come loose. Easily fixed, and then back to reassembly. 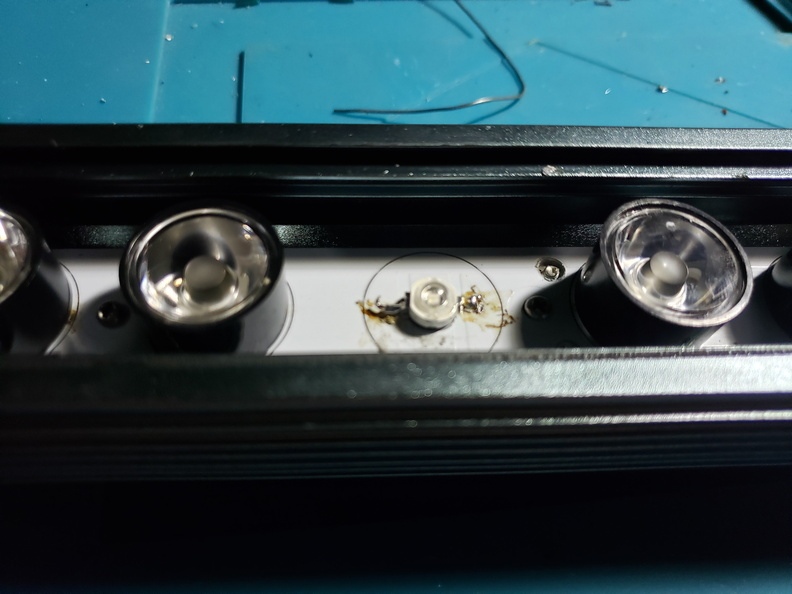 First, place the acrylic shield on top of the unit, and line the holes up with the little brackets that hold the screws. In my case, the one on endcap came out, so I carefully held it into place from the side and put the screw in. Because I broke the center bracket, there was simply no way to reinstall that, so I just filled the hole in the acrylic with a dab of E6000 just to keep water out. Finally, reinstall the 4 screws on the endcap, and you are done!

And now my OR2 works again! Now I just have 1 more unit to repair. Total time for this project is about 4-5 hours.

Here's hoping you never have to do this, but all told, it saved me about $200 from not buying new ones. I'm hoping these new LED's last longer...

How old was this fixture?
Orphek wasn't willing to do anything as a warranty issue?
OP

My life outside of reefing was super busy at the time, so I didn't catch the problem right away. I'd say they ran for about 9 months before failing, but I didn't get around to contacting them for another 4-5 months after that, which put me over the 1 year warranty, and they happily offered to sell me a pair of OR3's to replace them.