I have a bunch of these now... what the heck are they?

View Badges
Haven’t added anything (wait for it...) in months, except for the reef cleaners order I made after an algae outbreak a month or two ago.

I added something like fifty snails and I’m really happy with their work ethic...

Whatever that thing is next to the nerite snail, I suddenly have about ten. Is this a stramballa (yeah I know that’s way off) snail?

as far as I know snails grow their shells, I have seen deferent species spawning or otherwise mating (trochus spawn regularly narisus are always getting down) but I don’t think this is a species I have. 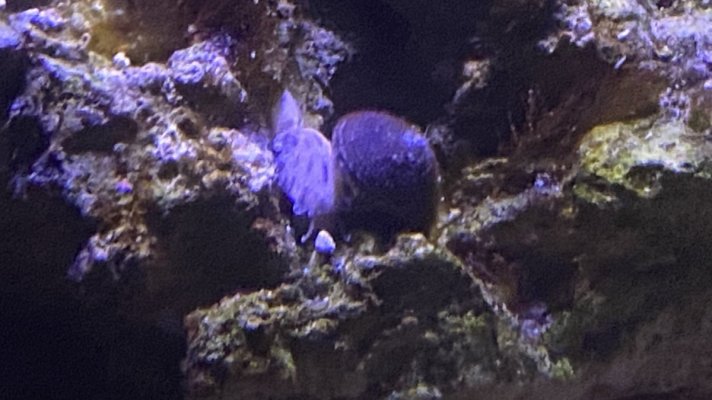 Stomatella, and yeah that looks like one to me. They’re adorable lol
Upvote 0
OP
1

Zer0 said:
Stomatella, and yeah that looks like one to me. They’re adorable lol
Click to expand...

Later last night I found a larger one that was darker in color and more clearly matches google image search more. I figure it must be where the others came from because it’s much larger. Maybe the others I saw (mostly white, semi opaque even) are juveniles.

I wish I knew how long they’ve been there. never noticed them before and now they seem to be everywhere.

thanks so much, I didn’t think this was going to get a reply.
Upvote 0

Where did you get the rock from? How long has the tank been running? What size is it? Do you have any fish in there?
Upvote 0
OP
1

Staghorn said:
Where did you get the rock from? How long has the tank been running? What size is it? Do you have any fish in there?
Click to expand...

It’s a little over a year old, maybe nineteen months or something.

All the rock is from a local LFS that has several of the common tub tanks filled with rock. Both literal live rock (sourced from the gulf) and Carib sea dead rock that’s been in the lagoons (one tub is live, which overflows into another witch is “cycled” which overflows into another that’s cycled plus a few months). So all their rock is likely to have critters because it’s all the same body of water, but their cured rock picks up coraline quickly in their system because of that.

Small fish x5 all capbread some from biota (four all added within the last five months) and a variety of Gastropods, like fiftyish.

mostly testing with hanna, generic chemistry for the most part, cal is a little high today @510 alk 11dkh ph 8.x salinity swings a bit daily by .05 up or down. Generally it’s kept at .25

I’ve only had corals in This system for two months. Mostly fine apart from a recent accident where I may have killed birds nest (broke it and it’s been downhill since) and I tried to remove some algae from my galaxea and killed half of it. I convinced myself I could be gentle with a brush and literally ripped the poor thing up on one of the heads (was trying to clean the body, but the brush snagged some flesh or maybe it was trying to sting the brush /shrug). It’s not dead, but it’s not happy. The head I damaged is dead for sure, the other has receded and looks awful. They’re both staying in there till they’re overgrown with coraline. I’m pretty sure the galxea’s going to make it eventually. The birds nest is done and I’m leaving it there to lie to myself.
Upvote 0

New snails dying, where did I go wrong?
2

Comments invited: Why do some really good skimmers have seemingly random overflow?
2 3