Fall 2021 Update:
After switching to an all SPS tank after moving back to DC, I decided the growth was too slow, the process was too frustrating paired with how much I like to travel, so I decided to convert the tank to a true mixed reef with some SPS, some select LPS and dominated by large leather coral. I sold about 80% of my acropora but kept the hardy, large colonies. I also bought some more torches, brain coral, and various colorful leathers. My goal is to have only interesting/colorful leathers. I also added some new fish and will continue to add a few more now that I will soon have giant leather colonies to feed. 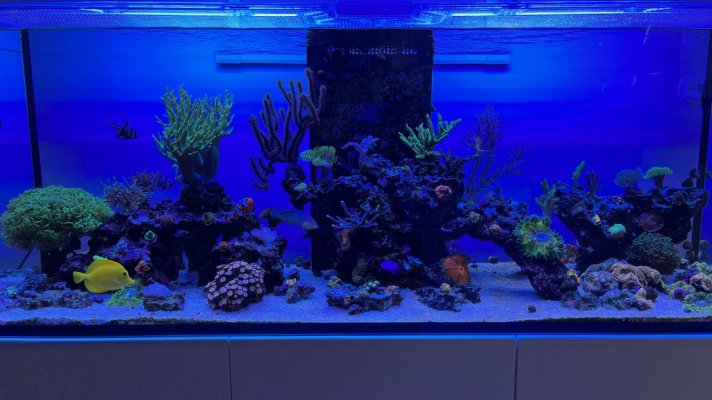 current video of the tank

Last FTS before the move: 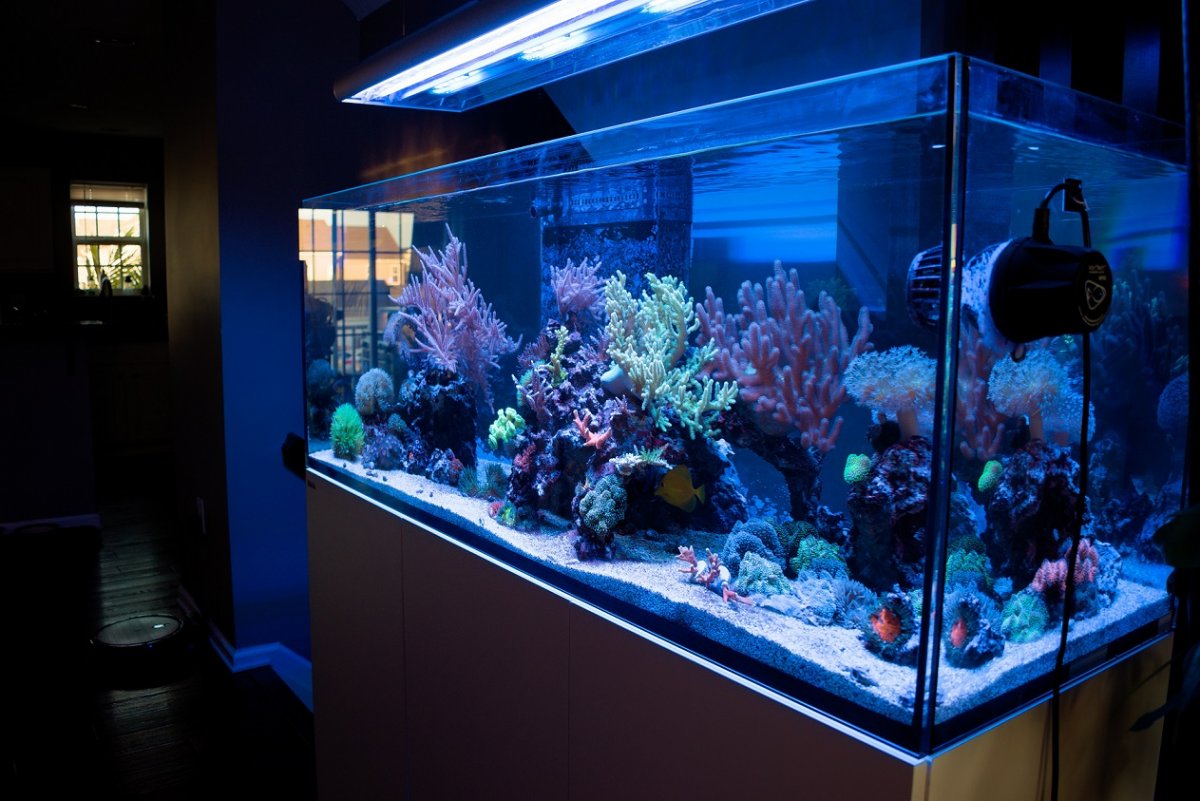 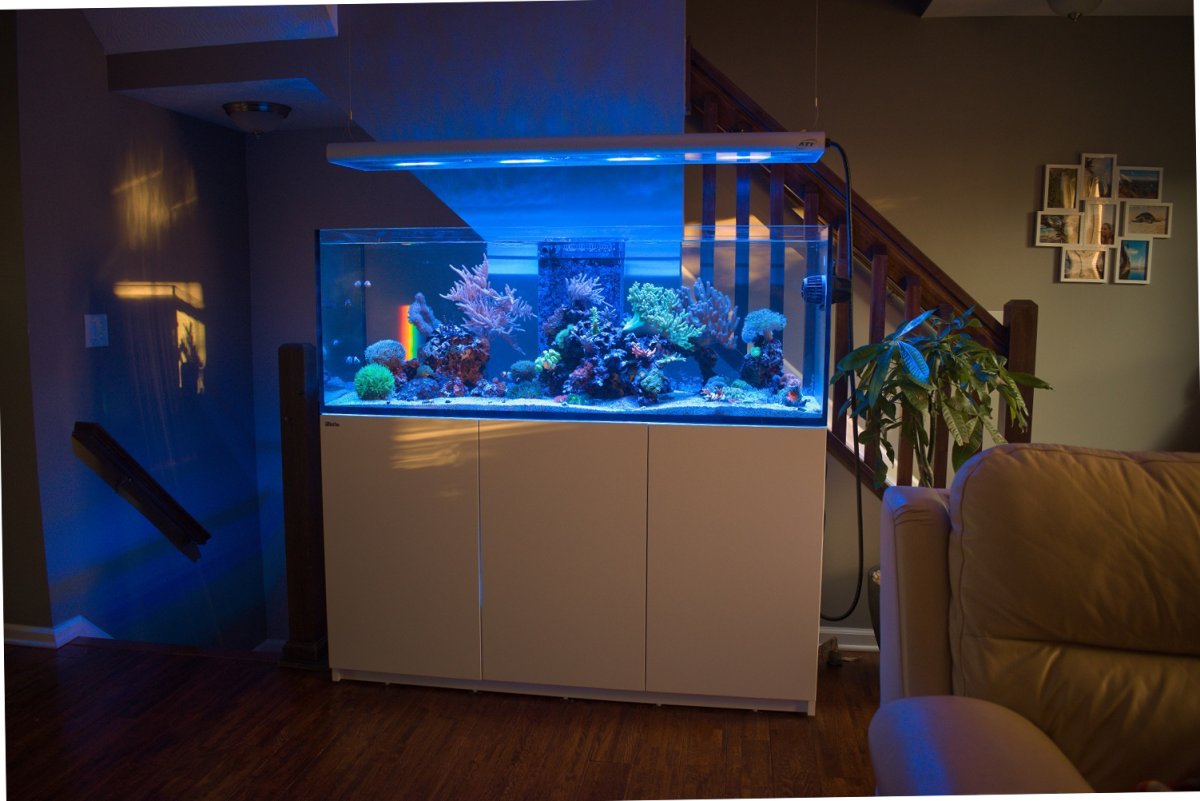 I have been pretty lazy in creating a new build thread since breaking down my 40g breeder and transferring everything over to my Red Sea Reefer 450 in April 2018. I did take pics throughout tho!

Back in April, my wife and I were out to dinner and she said, hey you keep talking about getting a new tank, why don't you just do it already. The next day, my Red Sea Reefer was on order I decided I didn't want to keep up with the SPS in my 40g when upgrading because I wanted a tank that I could ignore for weeks at a time if needed since I travel frequently for work. I found after a week of travel, the last thing I wanted to do was come home, test my water, adjusted my dosers and do water changes. So I sold all of my SPS and traded in for a mixed reef. I kept my Ricordea florida, but added leathers, LPS, other softies, gorgonians and anemones.

Delivery day was a bit nerve racking, as other have stated. Red Sea does a great job at packing the tank, but the freight company doesn't have the best reputation. Knowing this, when the guy showed up with my tank, I made sure to be nice, talk about baseball so we started off on the right foot. He was nice enough to bring it into my garage, and I said hey, the pallet looks a little beat up and there is a crack in the outer wooden box, do you mind waiting for me to open it up and take a look before signing? He said sure thing as we continued to talk Cleveland sports. No damage to the glass, so I was happy. 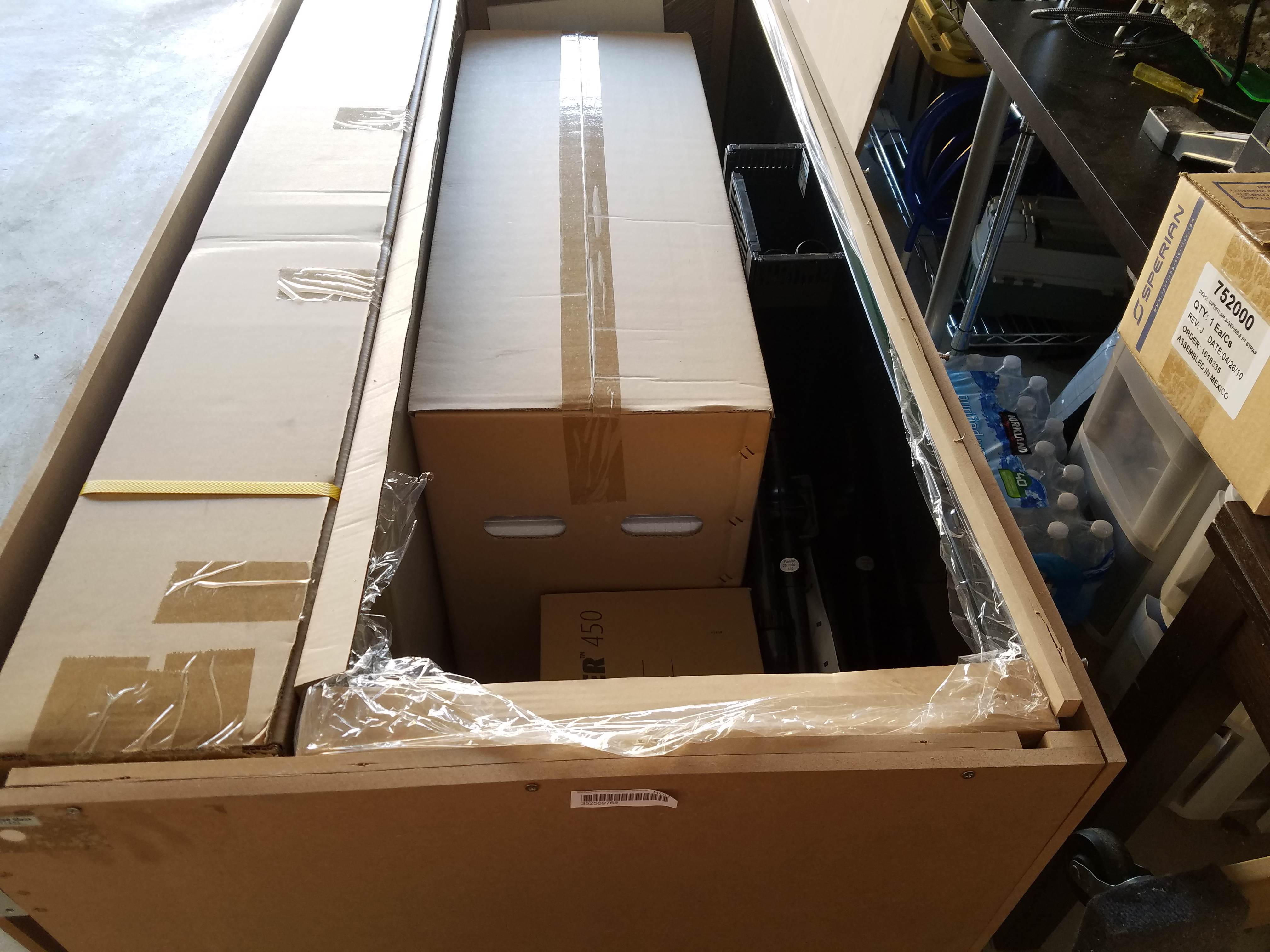 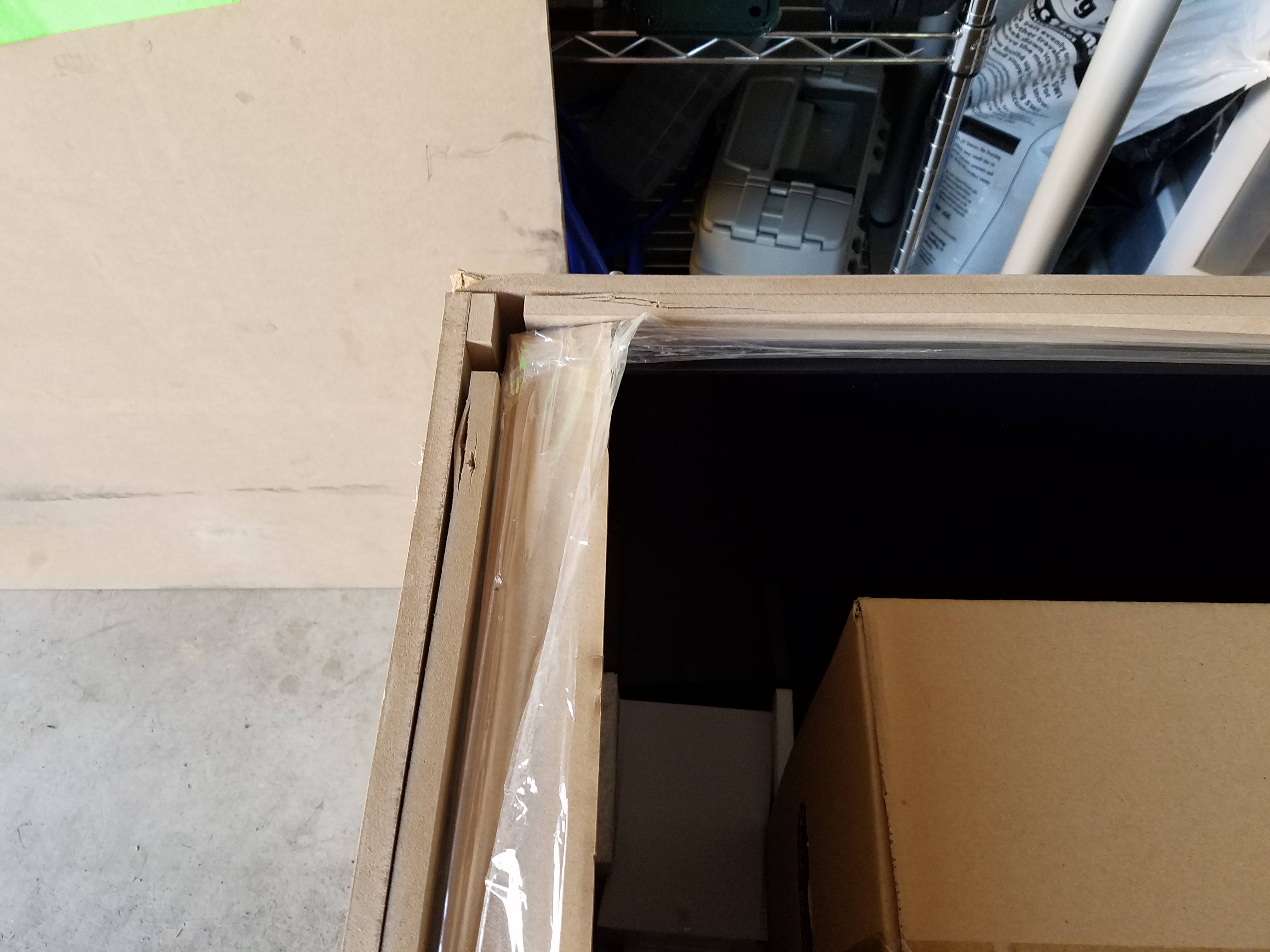 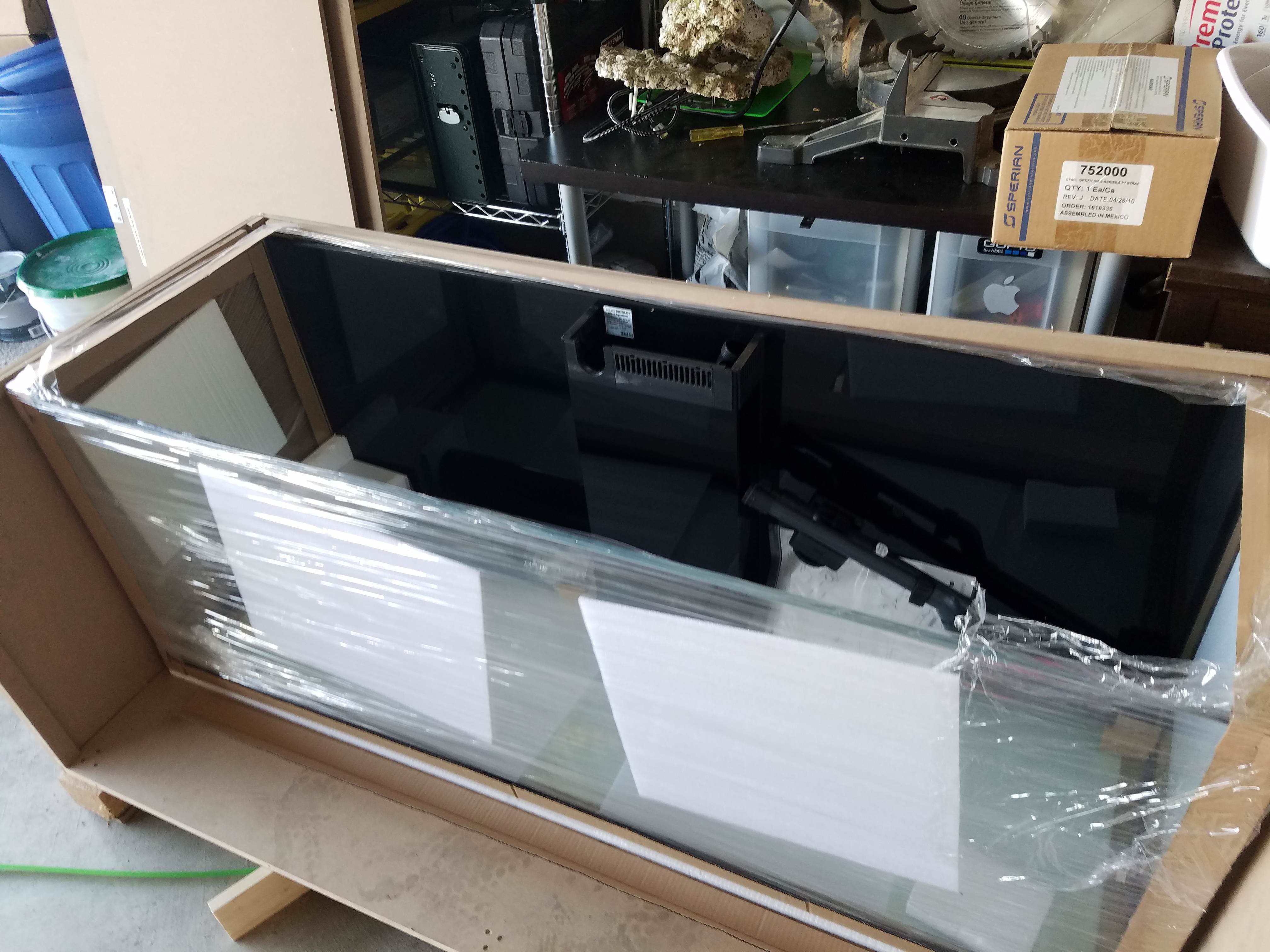 Next was to build the stand and set it up. Thankfully, my local club has glass suction movers, which made lifting this beast a lot easier. My brother and I ended up muscling it up a flight of stairs, with a turn in the middle, to my living room. after getting it setup, I hung my ATI Hydrid and did a leak check, and adjusted my light program to get my desired PAR 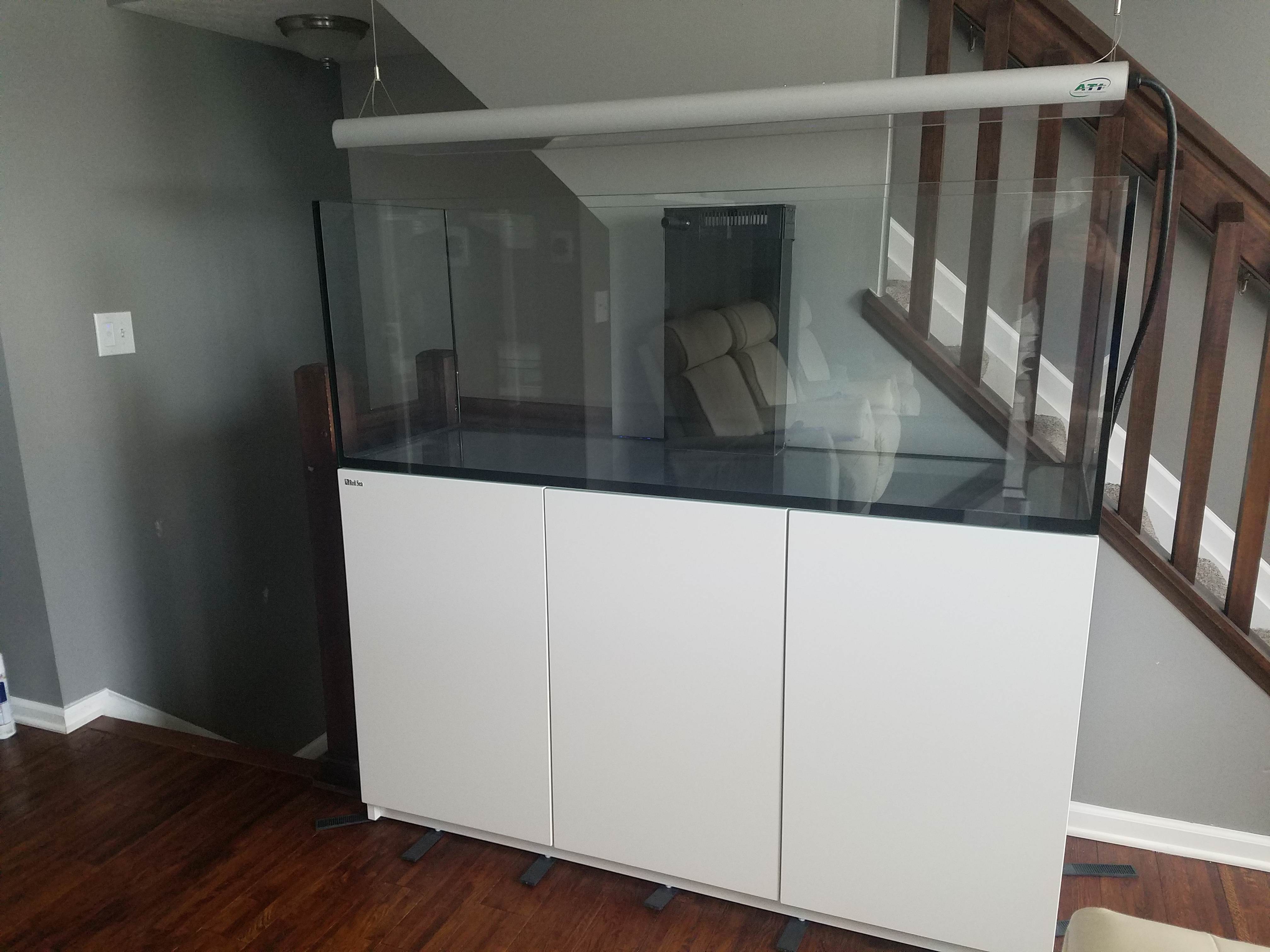 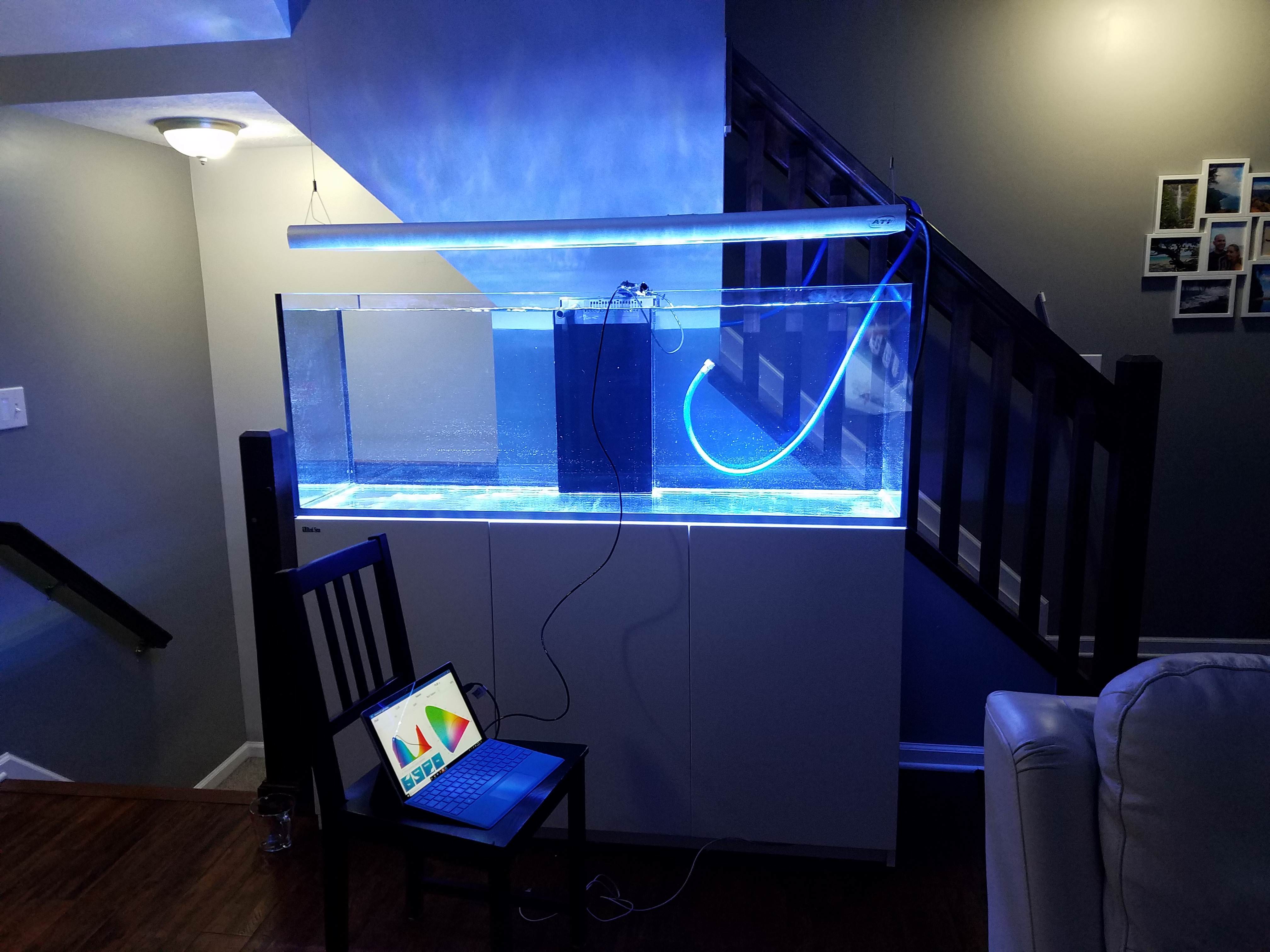 Once confirming there were no leaks, I started filling it and moved the rock over, gave it a few days to make sure it didn't cycle then everything else 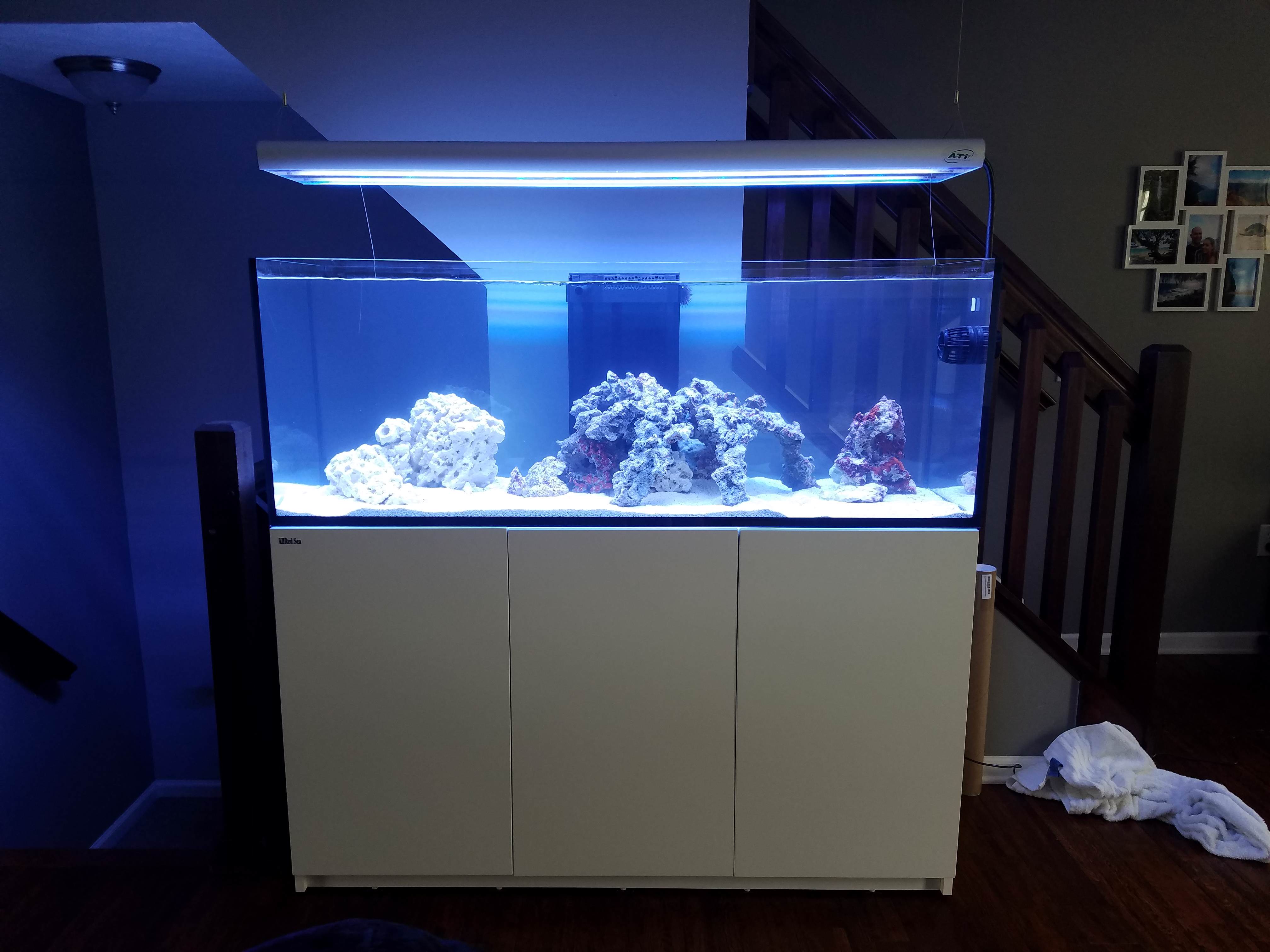 And everything else. Going from a 40g to this beast sure made everything look empty. 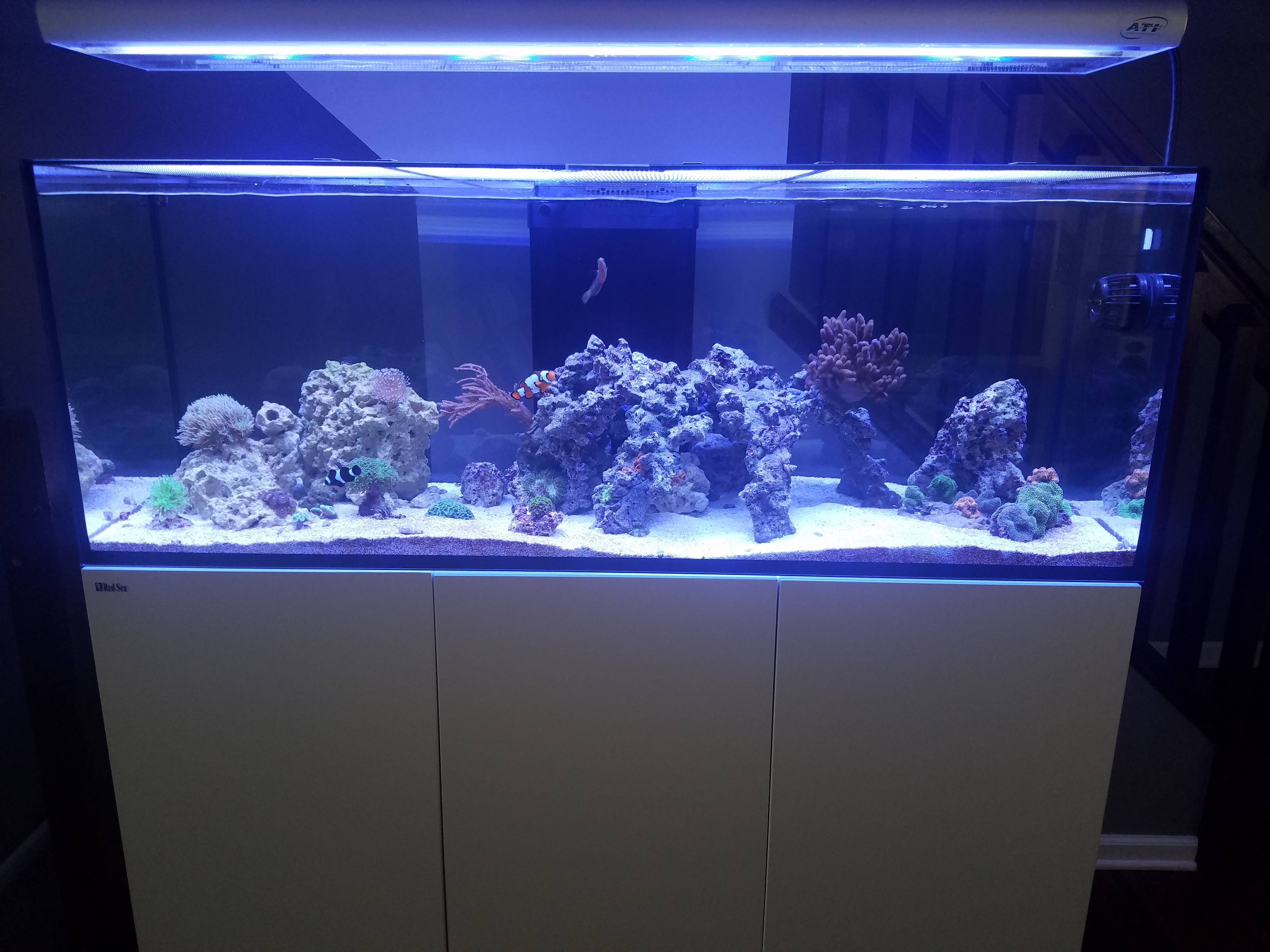 Fast forward a few months, adding a few fish and some corals and anemones, and now its looking a lot fuller. 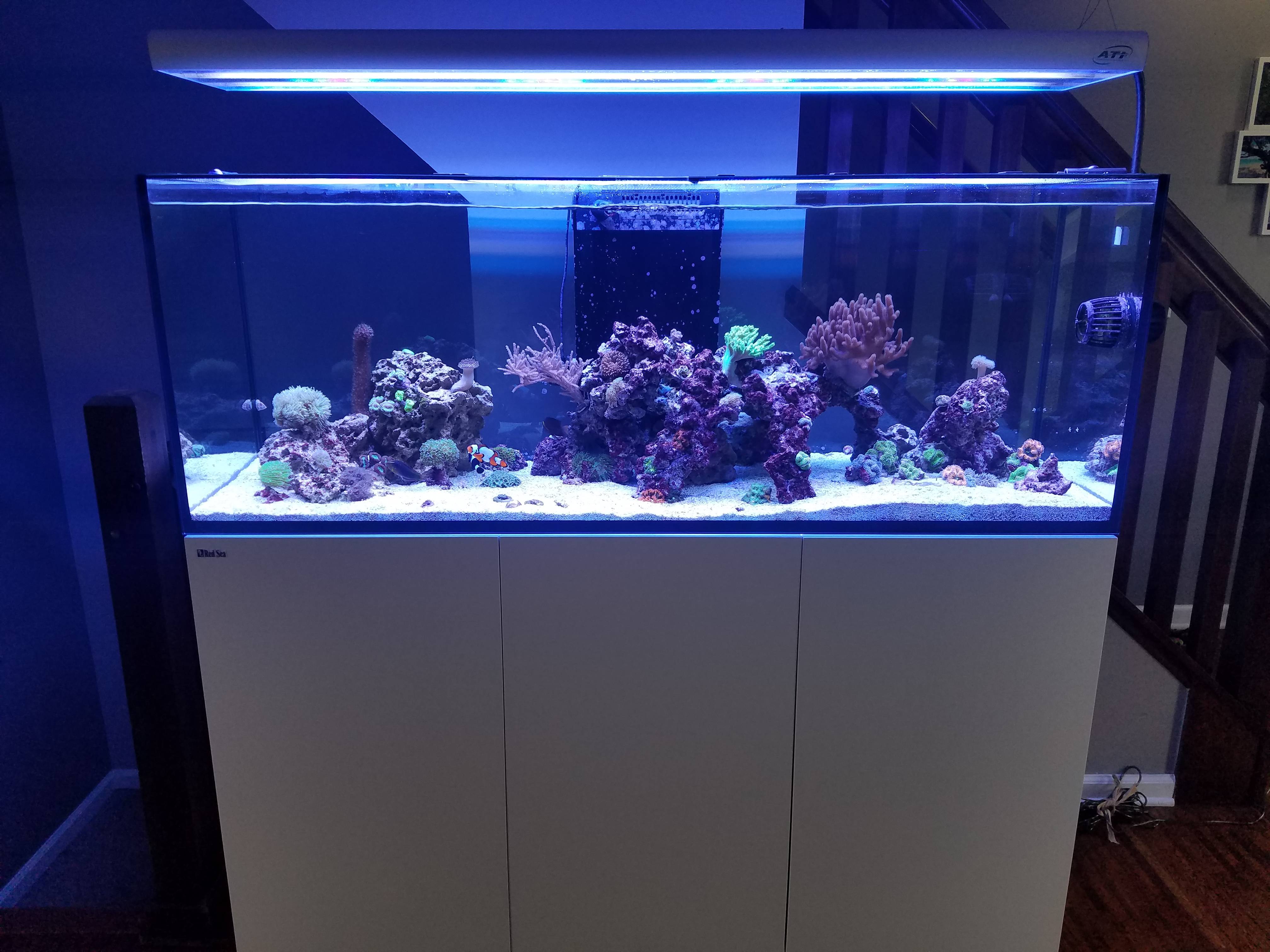 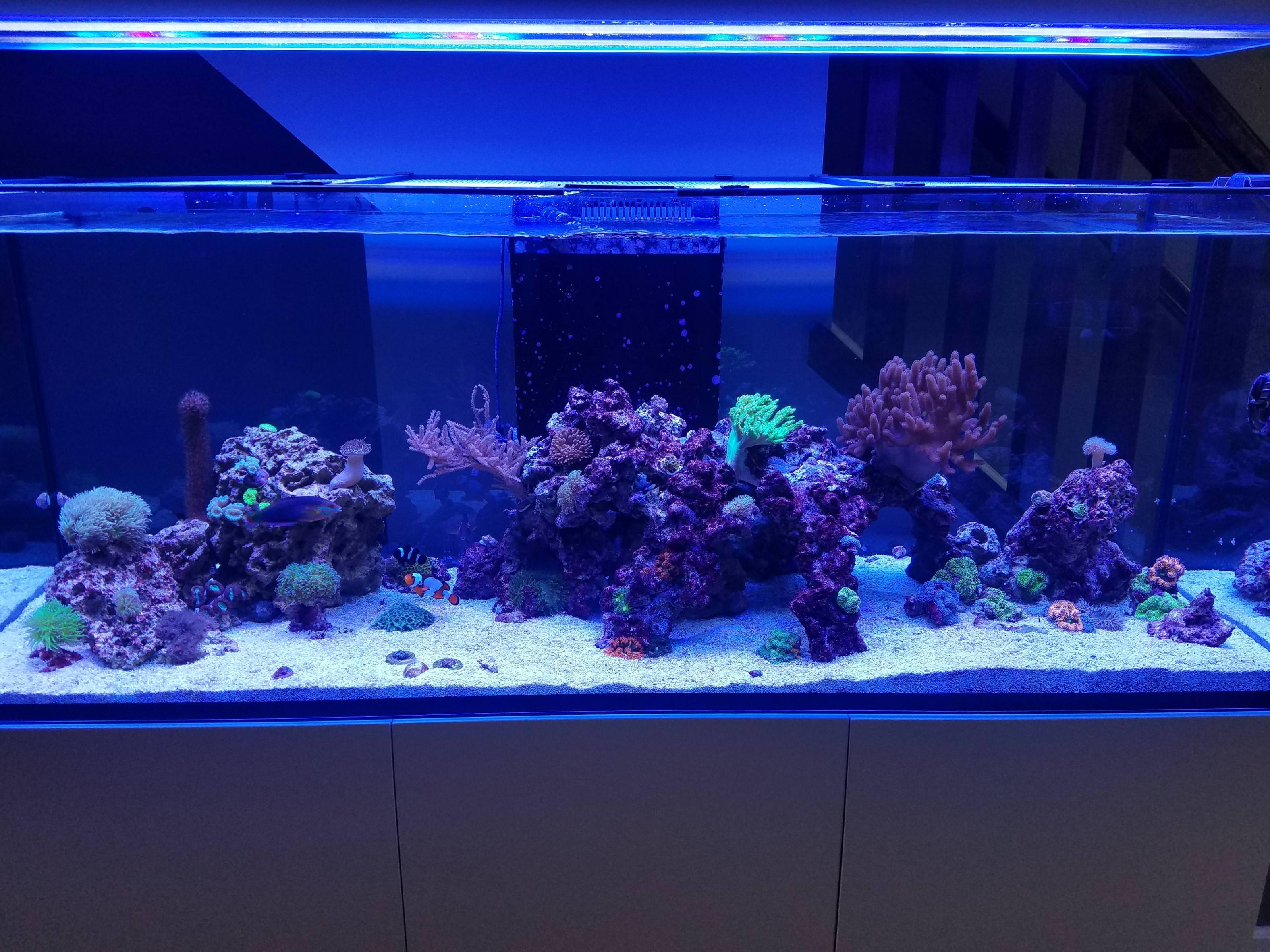 Sump, which is a mess. Not sure when I will do some cord management, but im sure at some point. Decided to ditch the filter socks and didn't want to pay $36 for filter cups when red solo cups work just as well. Current bioload doesn't really require much in the way of filtration, but I have plenty of space to add stuff as needed. 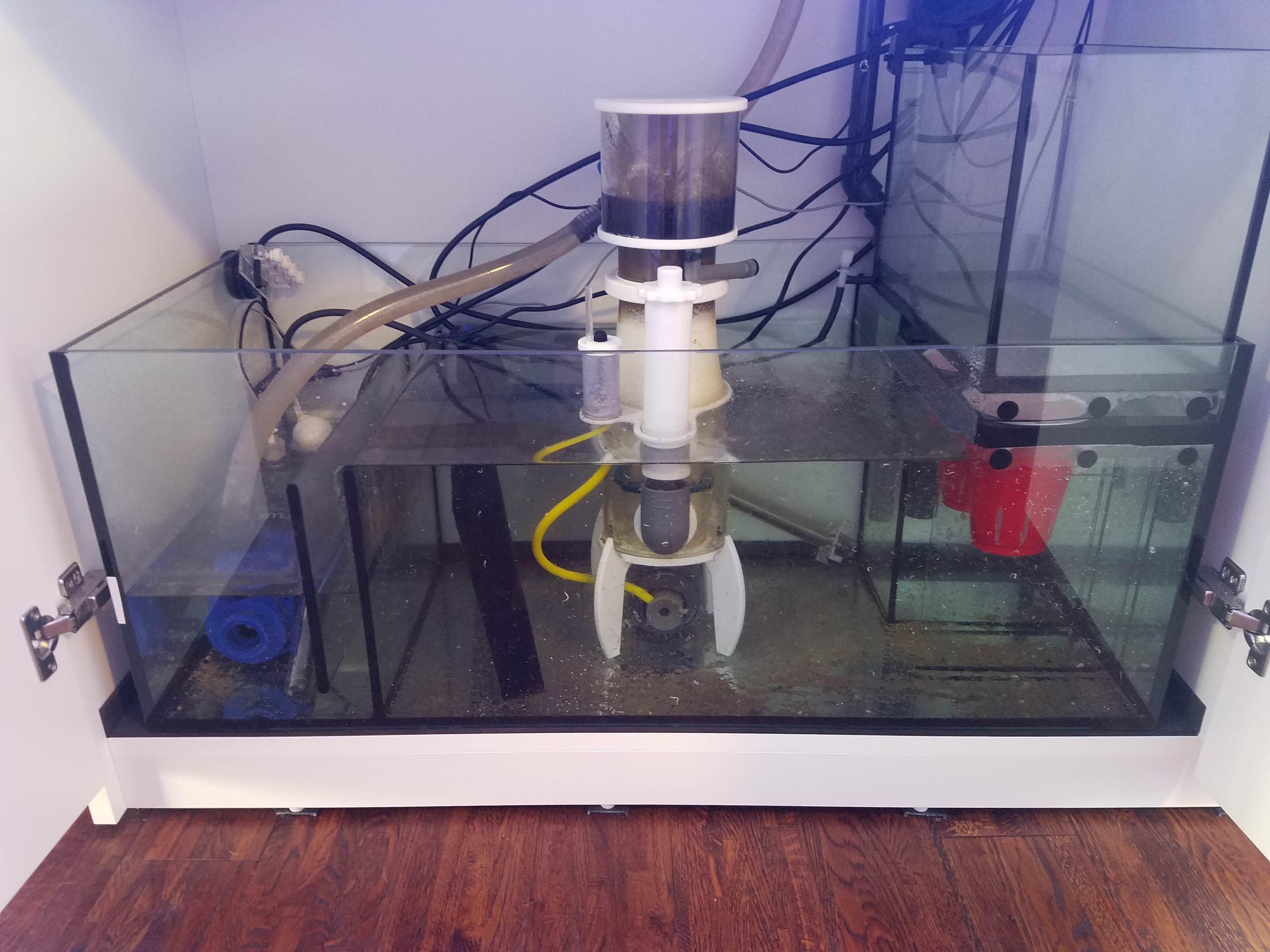 Inside my equipment side, nothing fancy: 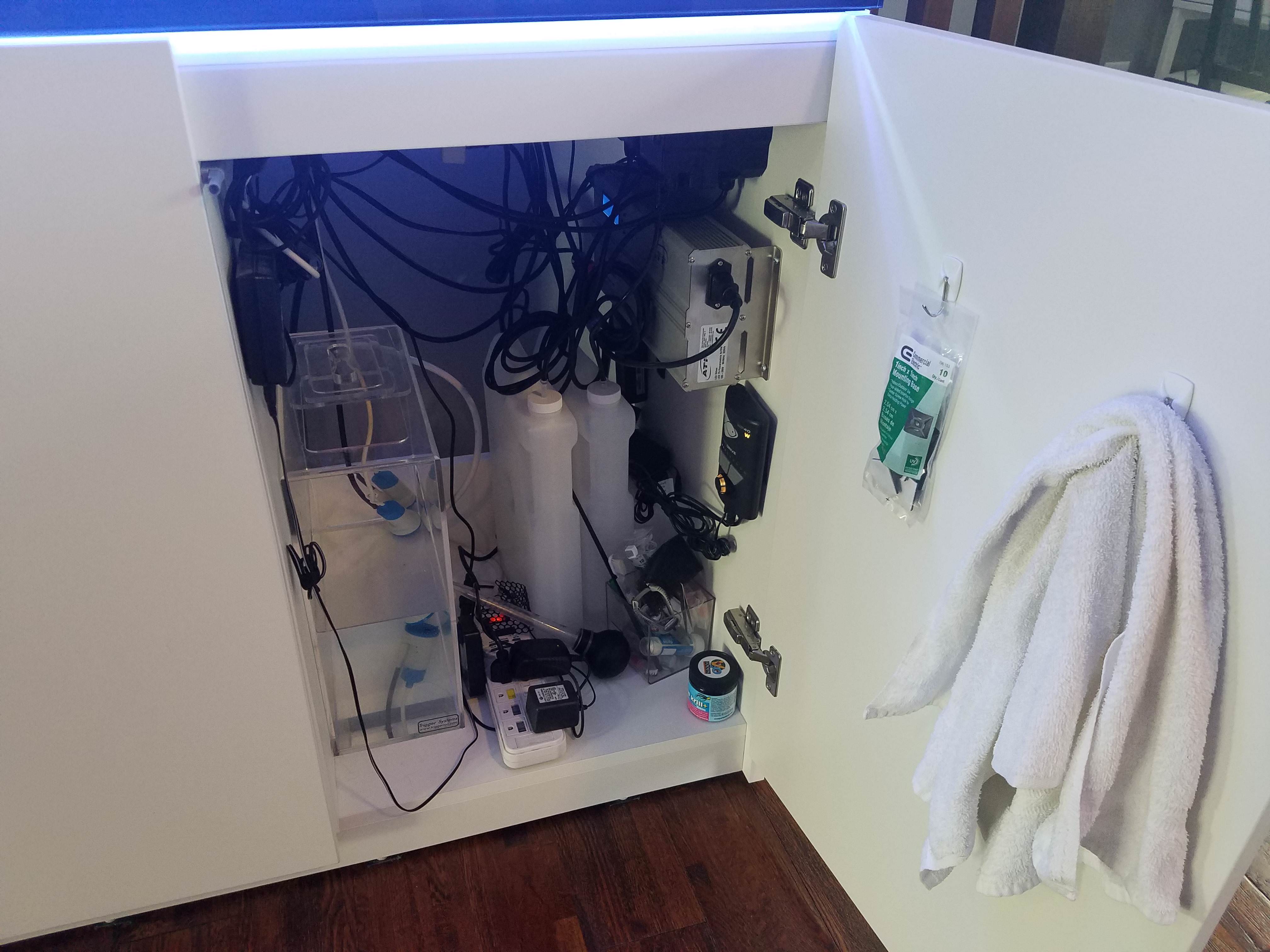 Some spots where my old acros and montis incrusted on my rocks ended up surviving the move and are coming back. So I have a Polleti's yellow tip, blue millie and a forest fire digi coming back to life. 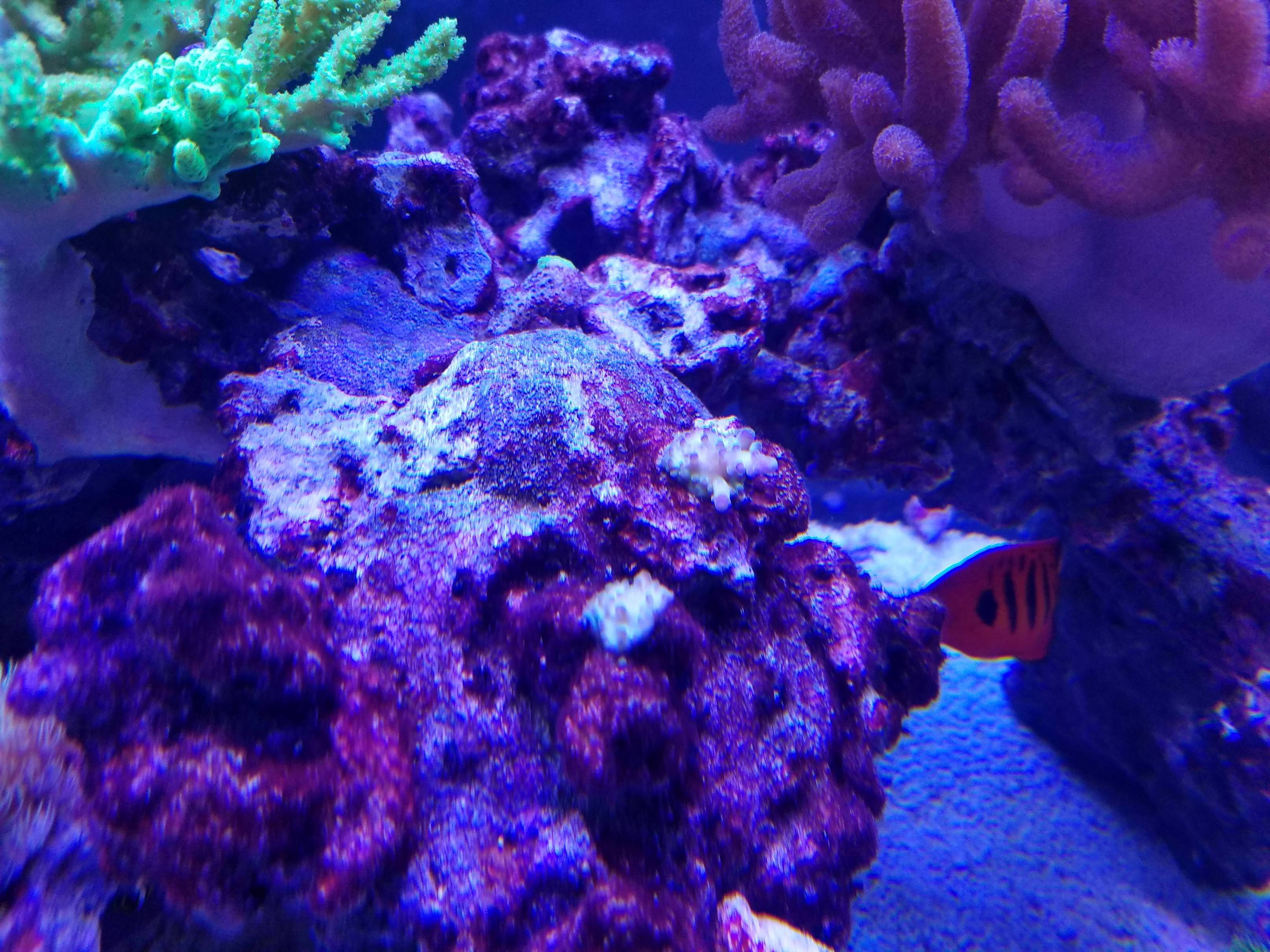 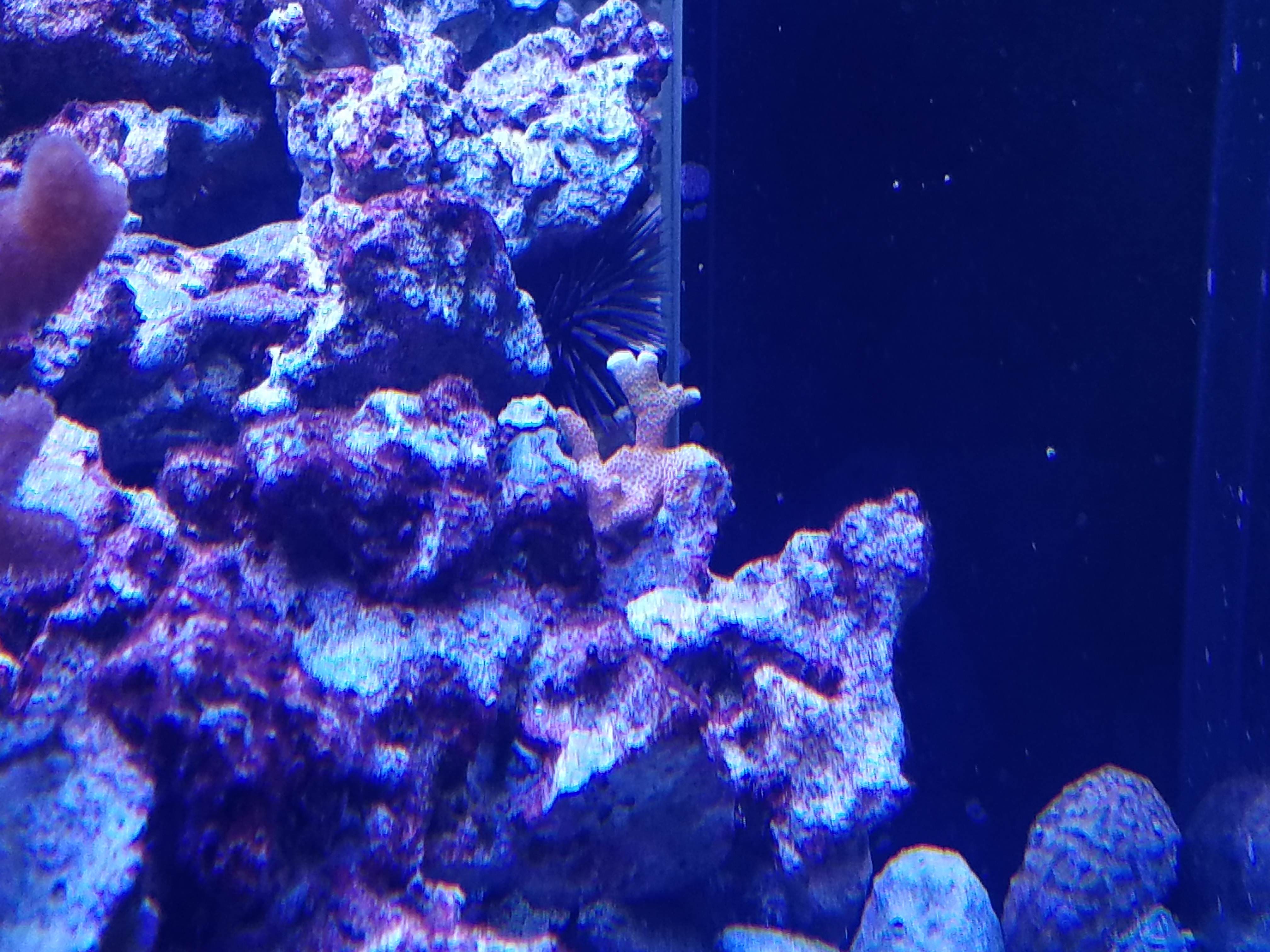 I have a growing red turf algae problem. I nuked all of my rocks with peroxide when I made the move, and it all appeared to die, but it made a come back. I've decided to not stress about it, but just got some back up last week to see if it could help. If not, oh well! corals should be thick enough in no time to block most of it of light. 2 tuxedo urchins and 4 massive mexican turbos should make a dent, I hope. 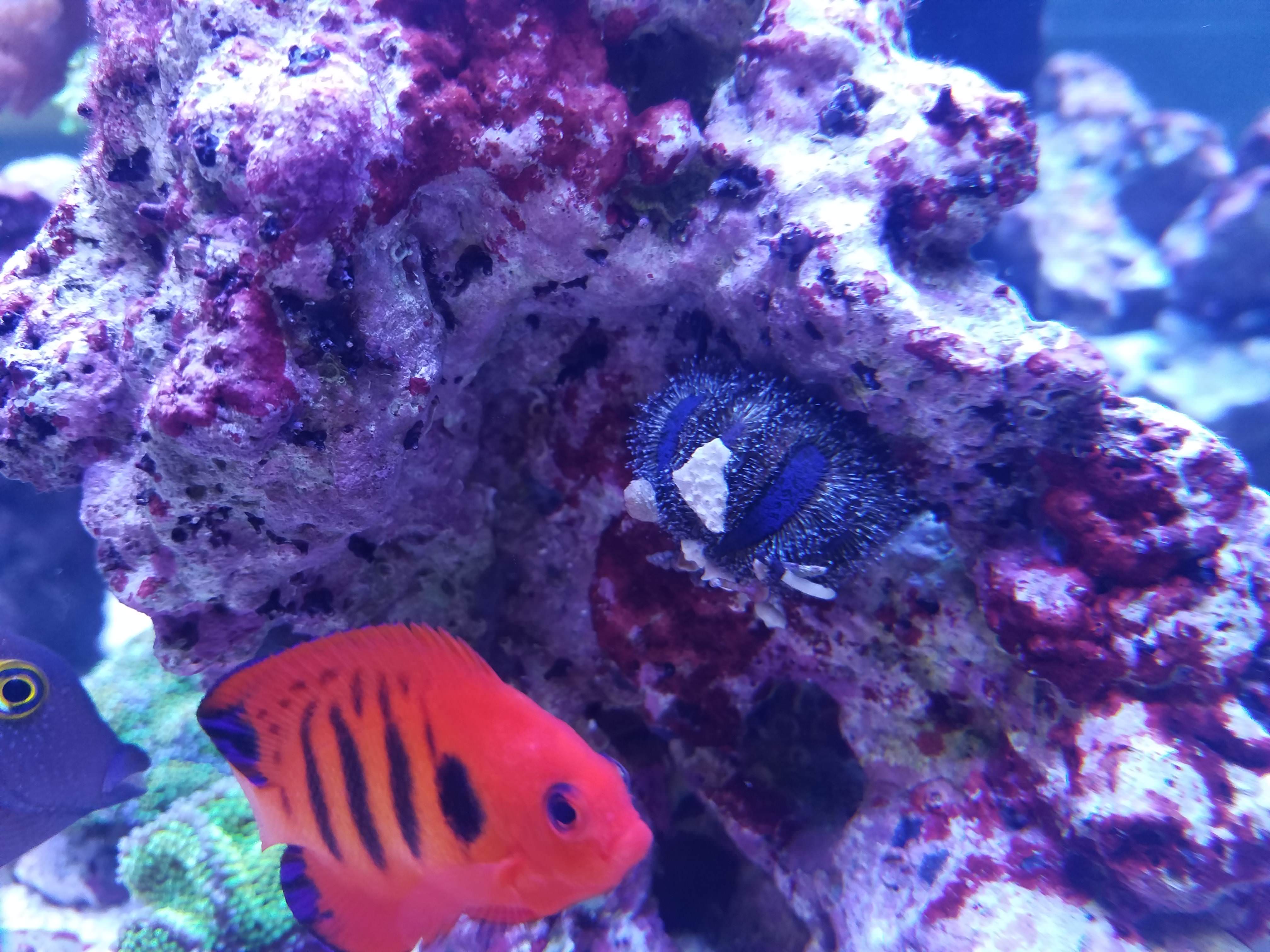 Some other random pics: 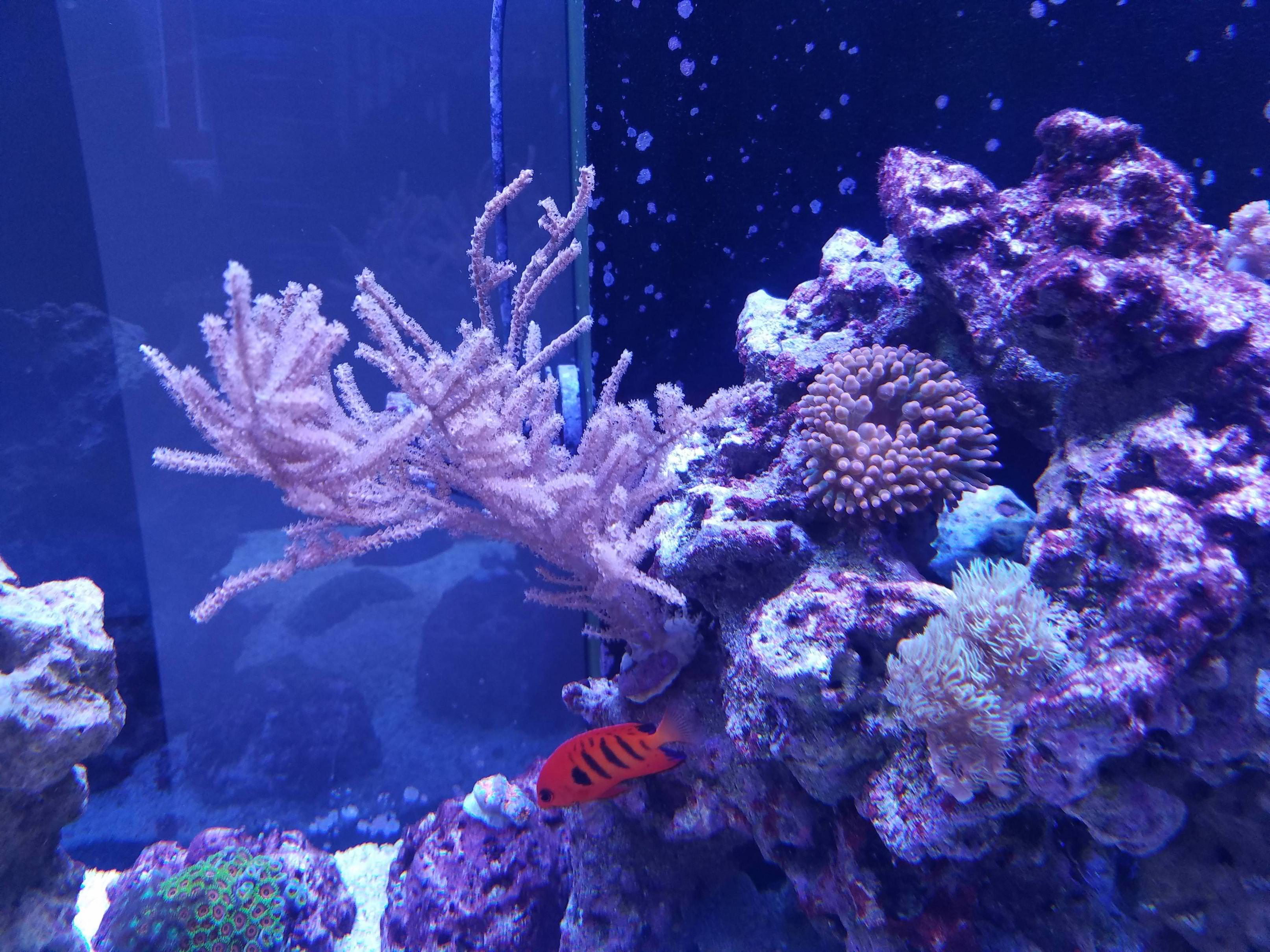 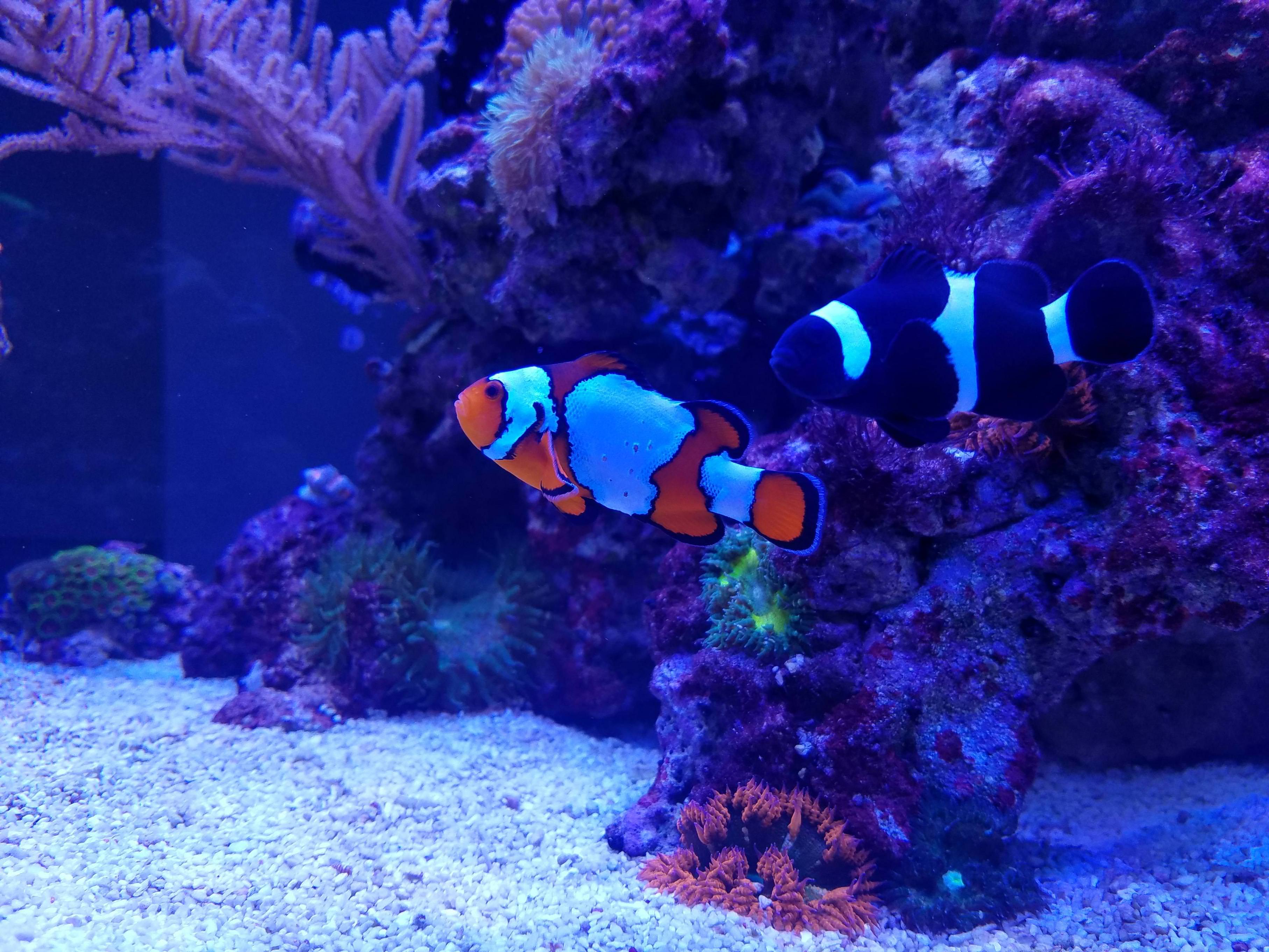 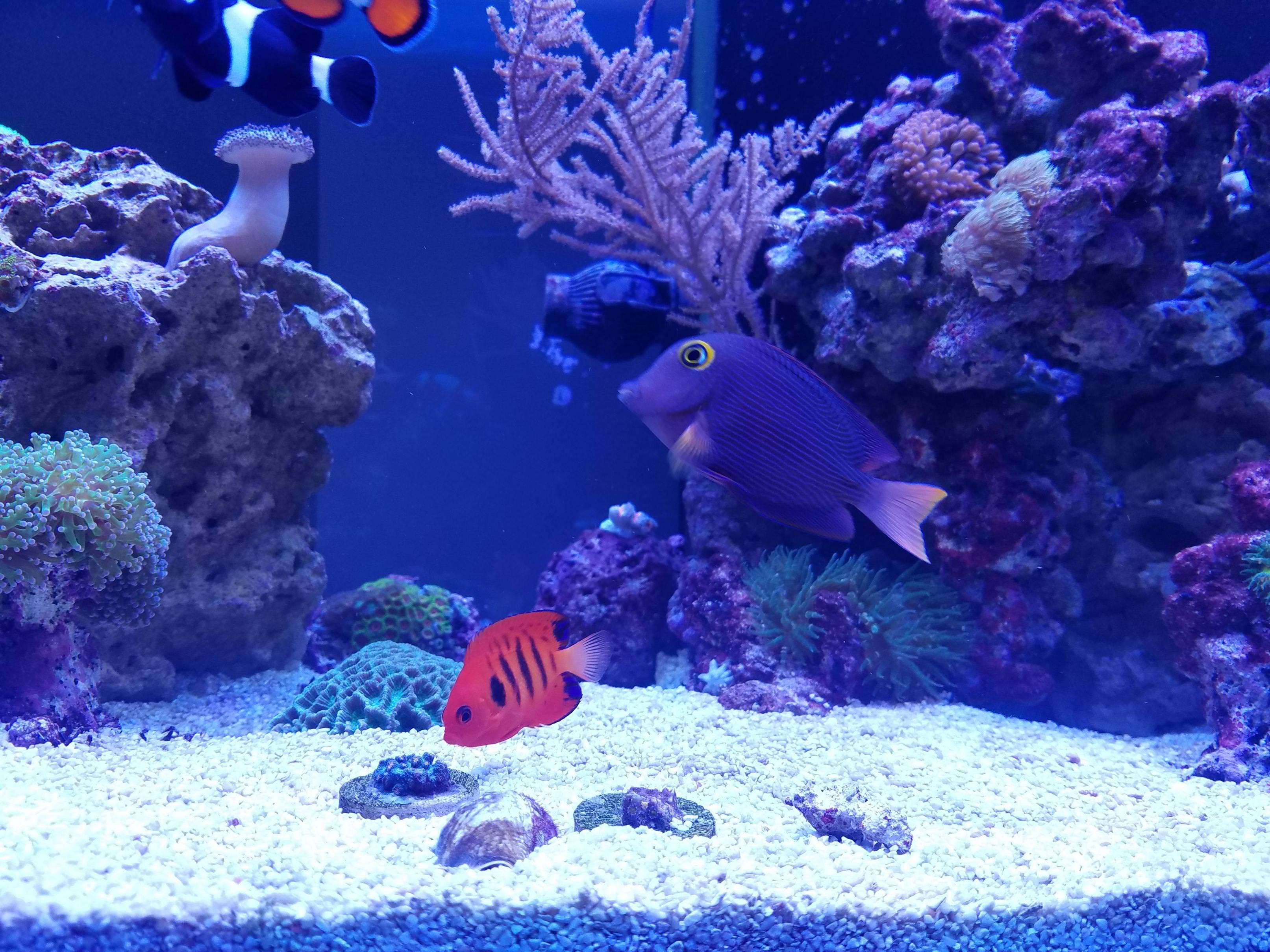 My goal is to keep things simple and reduce the possible points of failure. So I will likely add some equipment as needed, but I tend not to try the trendier fads. Keep it simple and keep it natural. 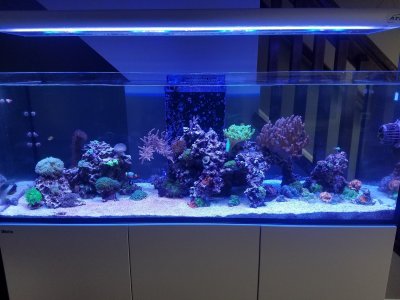 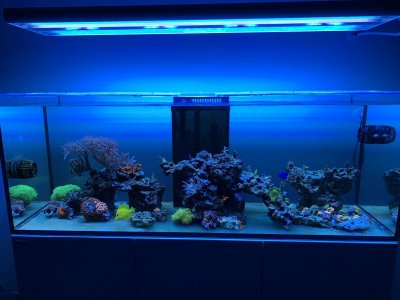 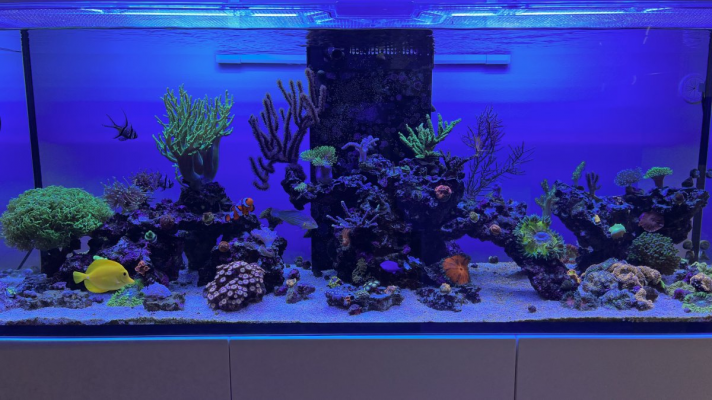 Great post Nburg!! The tank looks great and I love your selection and rock work. What’s the branching leather (?) you have on the right side of your tank???

Great post Nburg!! The tank looks great and I love your selection and rock work. What’s the branching leather (?) you have on the right side of your tank???
OP

Paleozoic_reefer said:
Great post Nburg!! The tank looks great and I love your selection and rock work. What’s the branching leather (?) you have on the right side of your tank???
Click to expand...

Pulsing sinularia
Here's a vid of it in action:

That is not only awesome but beautiful!! I guess I’ll have to add that to my wish list!!!

Nburg said:
Pulsing sinularia
Here's a vid of it in action:

Congratulations on your new tank, that’s a beautiful set up

Really great looking tank if I do say so myself! Following along
OP

So someone will probably ask, but I ripped off the back black wall as soon as it was unboxed. I hate black backgrounds because it makes the tank look darker. Also its inbetween 2 sets of stairs so when I come up the stairs from the garage, i can see the back left side, and going up to the top level, I can see the back right side. Almost like a room divider tank

Where on earth did you get the pulsing leather?

I must have one!

Local coral farm. Reef systems in New Albany, OH. Not much on the online front, but he might ship. The way it grows, i might be shipping before too long, lol.

Nburg said:
Local coral farm. Reef systems in New Albany, OH. Not much on the online front, but he might ship. The way it grows, i might be shipping before too long, lol.

He has a mother colony over 3 feet long in his 900g mixed reef
Click to expand...

Your aquascape is awesome! I like those "legs" that touch the sand, but leave everything open.
OP

Lostreefin said:
Your aquascape is awesome! I like those "legs" that touch the sand, but leave everything open.
Click to expand...

I liked it so much in my 40g, that i recreated it in the upgrade. Caribsea's life rock shapes

Great tank!
I also started with this size.
Your scape is amazing and I agree in removing the black back wall. It looks so much better without it.

My fish we begging for food so thought it would be a good time to take some better pics. I only have 5, but just santitized my QT so I'll be getting some more in the DT in several weeks. 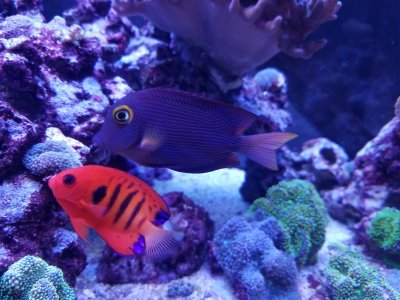 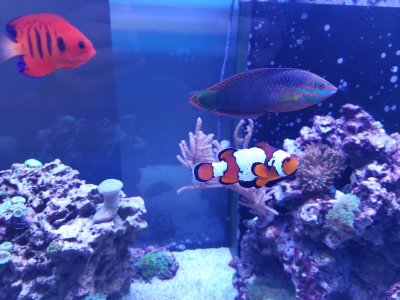 The fish are looking nice and healthy.
Which one is the fifth? Another clown?

Janci said:
The fish are looking nice and healthy.
Which one is the fifth? Another clown?
Click to expand...

Yeah, its a black and white clown. You can kind of see his fins behind the snowflake in the second pic.

Nburg said:
Yeah, its a black and white clown. You can kind of see his fins behind the snowflake in the second pic.
Click to expand...

Haha.
I had to zoom in to see that.