I've always been a blenny "finatic" ever since I first saw one in the local fish store that worked at as my first job over 40 years ago. They weren't very common in the stores back then, but my first one purchased was a bright red cold water blenny, sold as a "flame blenny", from the Mediterranean. Back then, I didn't have the internet available to aid in fish identification, although there were some decent books to help identify most saltwater fish, information for this species wasn't to be found. I had no idea it was a cold water species, so my tropical saltwater fish only tank wasn't a good fit for it, and it didn't do well.

About a year later, a male molly miller, Scartella cristata, showed up at the store, and I had to have him. He was an awesome fish and lived for several years until I had an unfortunate tank crash after a power failure. This fish really started my obsession with blennies. His personality had me hooked. He had a routine, moving about the tank from perch to perch in search of food, establishing territory and his place in the pecking order, and he was always on the alert. He was easy to keep, ate just about anything that I offered, and grew to a large size. Their large pectoral fins have a heavy base and very thick bottom rays, giving this fish a muscular appearance. That and their tough temperament allow them to be kept with fish with tough reputations. Yet, I felt that it was a good community tank fish. It only stood up for itself only when challenged to fight and didn't initiate anything.

Many blennies like this lack a swim bladder, making them a nice addition as a benthic occupant to an aquarium. Their pectoral fins are large, with several of the bottom rays having evolved to be thicker to provide additional support as they perch on various objects. They enjoy perching on shells, coral, or anything to give them a vantage point to ambush food, scout for predators, or just for a spot to be curious of their surroundings. A pair of tiny pelvic fins aid in their perch as well. 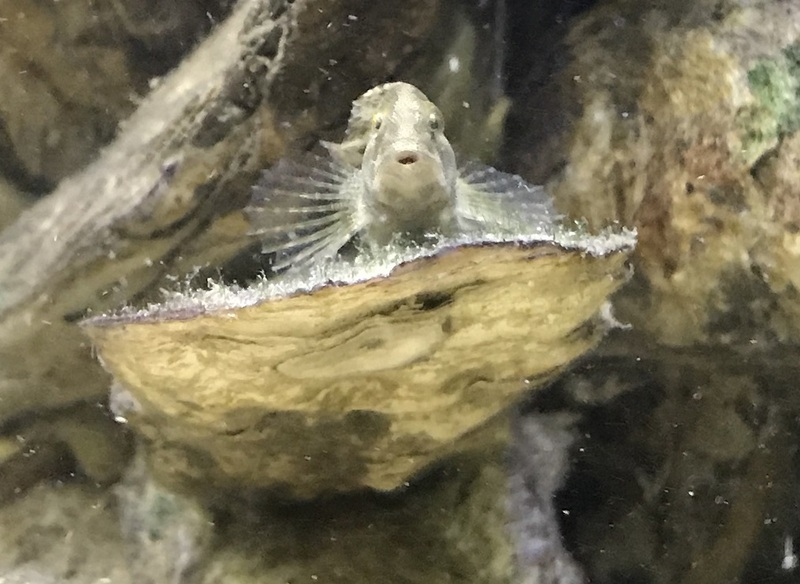 Benthic blenny species lack a swim bladder, so you often see them perched on their large pectoral fins at their favorite spots in your tank to get the best vantage point of all of the action, especially at feeding time.

Their long slender bodies are perfect for fitting into tight nooks and crannies, such as an empty snail or bivalve shell that they may use for cover from predators as well as a potential breeding shelter. Sometimes, only their head peers out of their hiding spot until a juicy morsel drifts by as they dart out for a quick meal, only to scurry back into hiding. 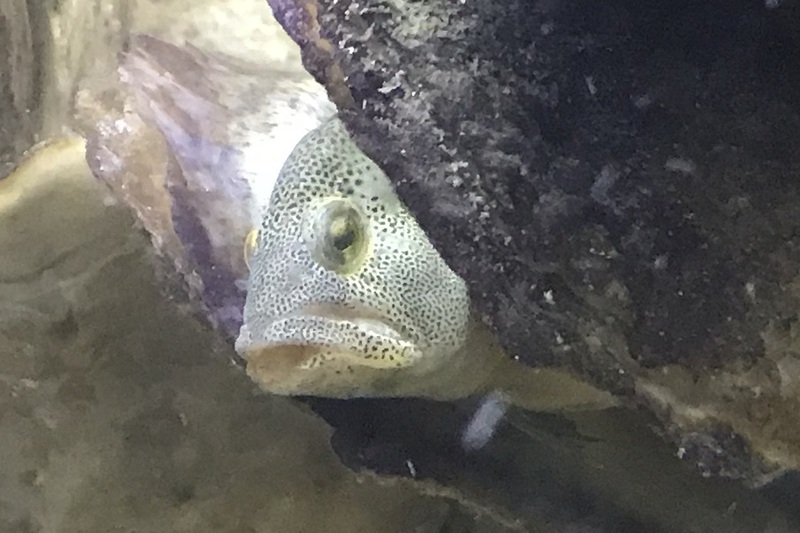 This adult male striped blenny peeks out of an oyster shell that he uses for cover and a potential spawning site. He defends his small piece of territory from all comers, especially rival male striped blennies.

I obtained my next blenny on a college science trip, a bottom trawl used for scientific sampling of the bottom life of the Chesapeake Bay. I asked my professor and the ship's captain if I could keep it, and they said sure. So, I brought it home and acclimated it to my tank. The species was Hypsoblennius hentz, the feather blenny. It only grew to about three and a half inches, but was tough as nails and had a ton of personality. It often sat in my hand and ate once it became used to my presence. Unfortunately, it only lived a little over two years before battling with a juvenile niger trigger. Both fish died of their wounds. I kept an algae eating bicolor blenny (Ecsenius bicolor) during this time, and both blenny species kept to themselves. Each had their favorite perches and routines for moving about the tank.

During one of my college courses, a researcher at my school was studying another Chesapeake Bay native blenny species, the striped blenny, Chasmodes bosquianus. I don't recall the results of the study, but the actual study isn't what caught my curiosity about them. It was their behavior. Although I've kept fish only marine tanks since then populated with various tropical species from local fish stores, my dream tank was always to be one housing them as my feature species. 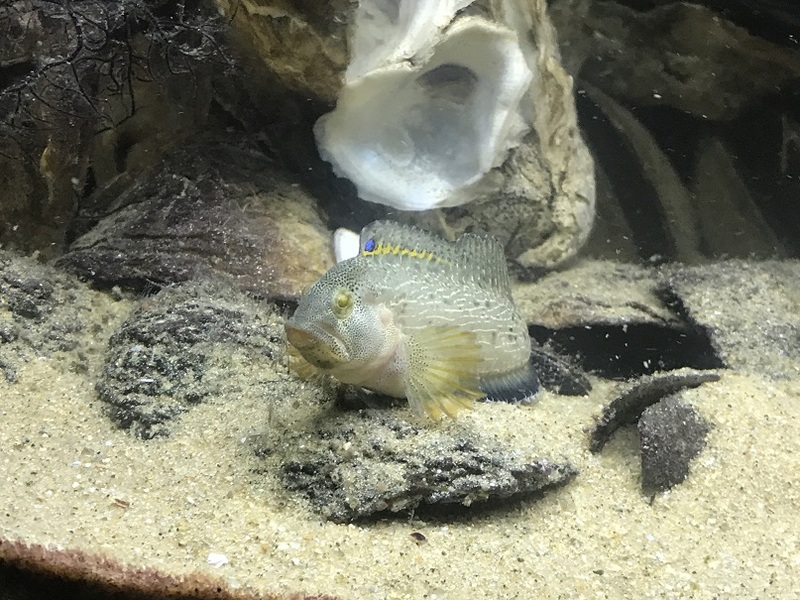 Pictured here is a male striped blenny (Chasmodes bosquianus) in his breeding colors, the fish that I'm obsessed with, in a smaller version of my dream tank. 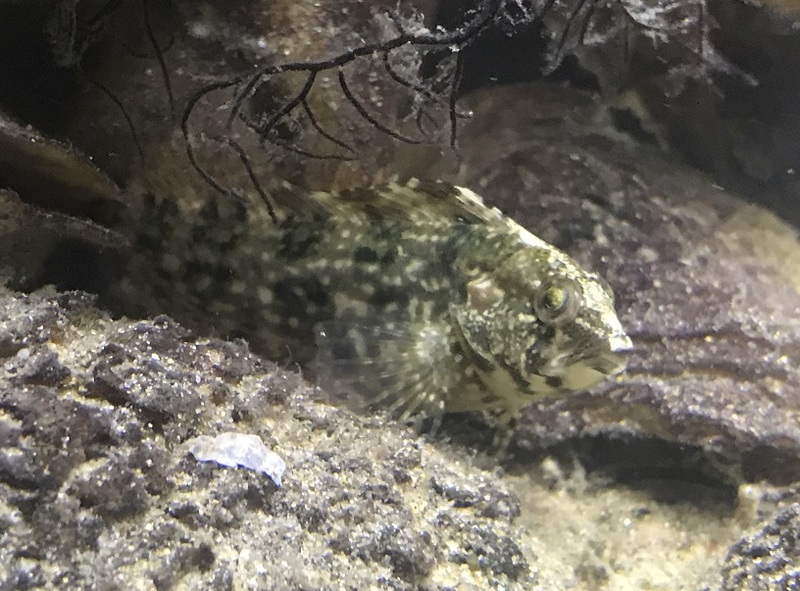 Posing in this picture for you is the female striped blenny. Notice the more drab coloration and blotchy striped pattern.

In 2007, I took steps to create my dream tank, and although I've come a long way, the build is still incomplete. However, I've been keeping a smaller version of the tank, a 20 gallon long oyster reef tank, stocked with striped blennies that I've been collecting locally for about a year now. The males have more color than I ever thought that they would, and although the females are a bit drab, they're full of personality. Just this past weekend, they've spawned. I have a male guarding eggs. I couldn't be more excited. I can't wait to complete my 100 gallon build for my oyster reef. Hopefully, I'll be able to share that build with you very soon.

And for a cool ending to share my obsession, here is a video of some of my tank action, with the best part starting at about the 3.30 minute mark and also around 5 minutes, some territorial roughhousing between male striped blennies.

Well, there you have it, the roots of my blenny obsession. How about the rest of you blenny "finatics"? What can you tell us about your obsession?

Fascinating. Thank you for sharing
OP

Enjoyed this -thanks for sharing!
OP 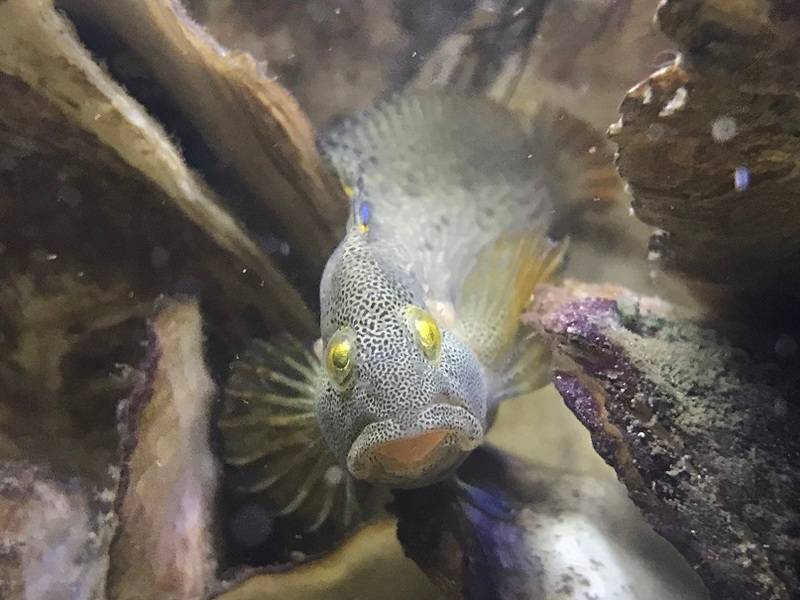