I received a nice message from revhtree encouraging me to do a build thread so I figured why not because I have extra time right now.


I found a really great deal on a used 750XXL in excellent condition on craigslist and had been wanting to get into saltwater for a while. I picked it up and with a lot of struggle moved it into my fish room. Please buy the suction cups before you need them and not after! This build has been ongoing for months and work has been extremely slow as I am very busy most of the time. 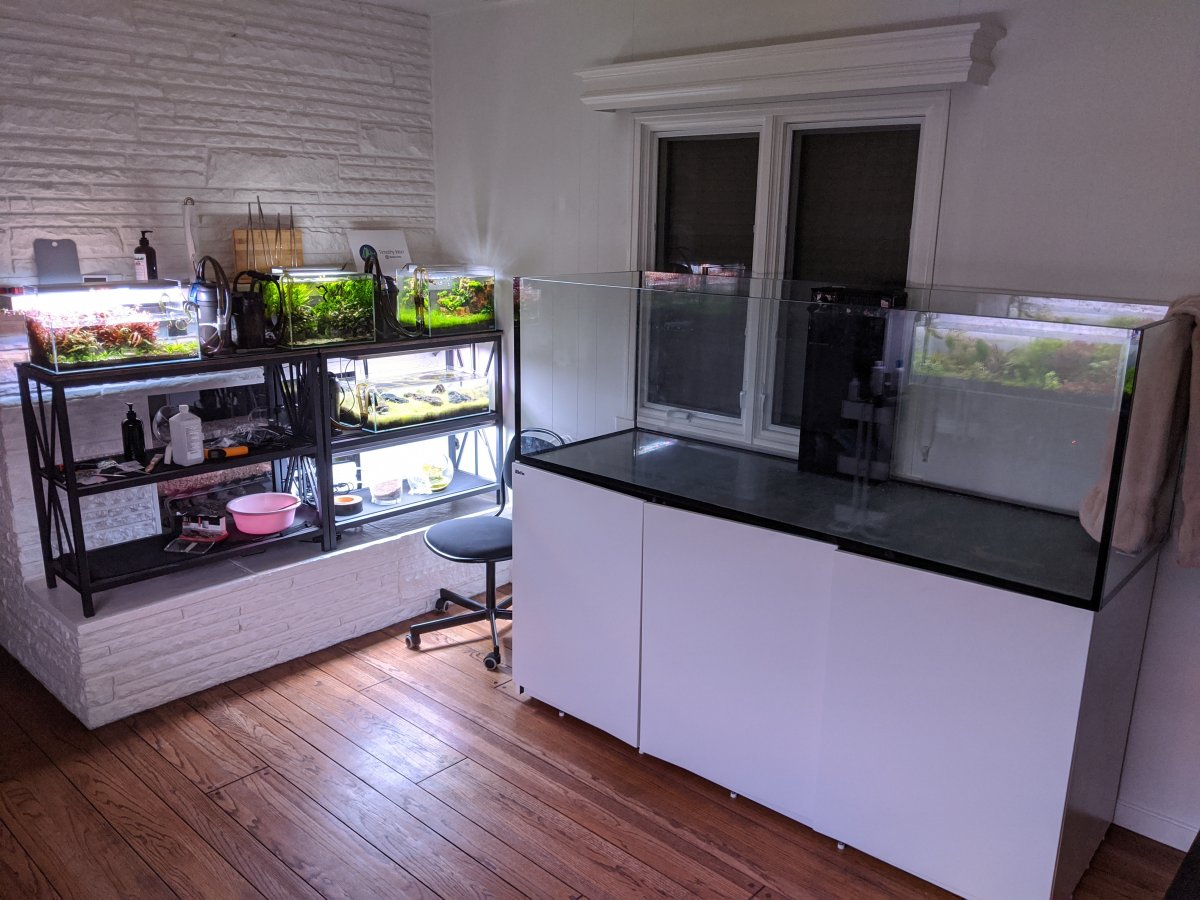 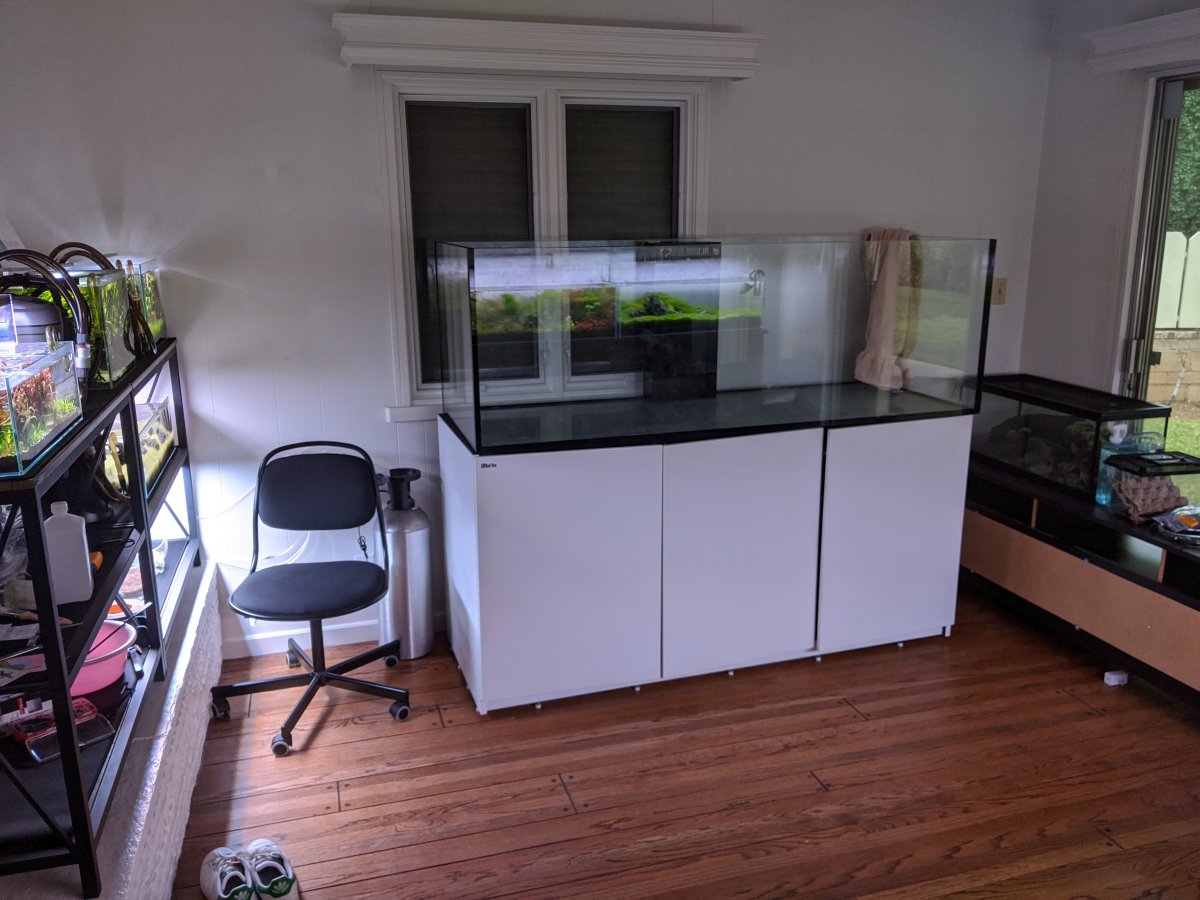 I have been into high tech planted tanks for a couple years. If you're interested check me out https://www.instagram.com/aqua.vista/

I decided to go big on my first reef tank in the hopes that I would not feel the need for multiple smaller tanks like was done with my freshwater hobby. 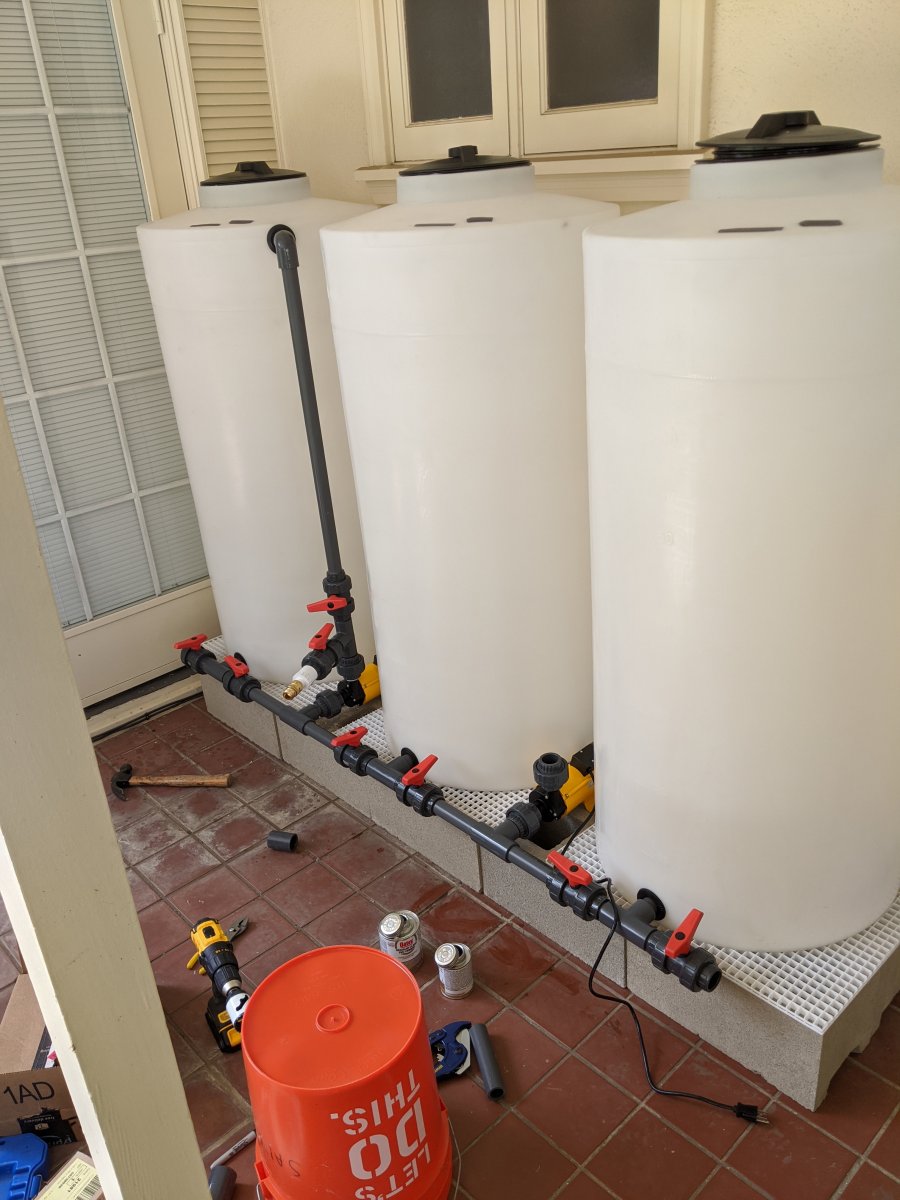 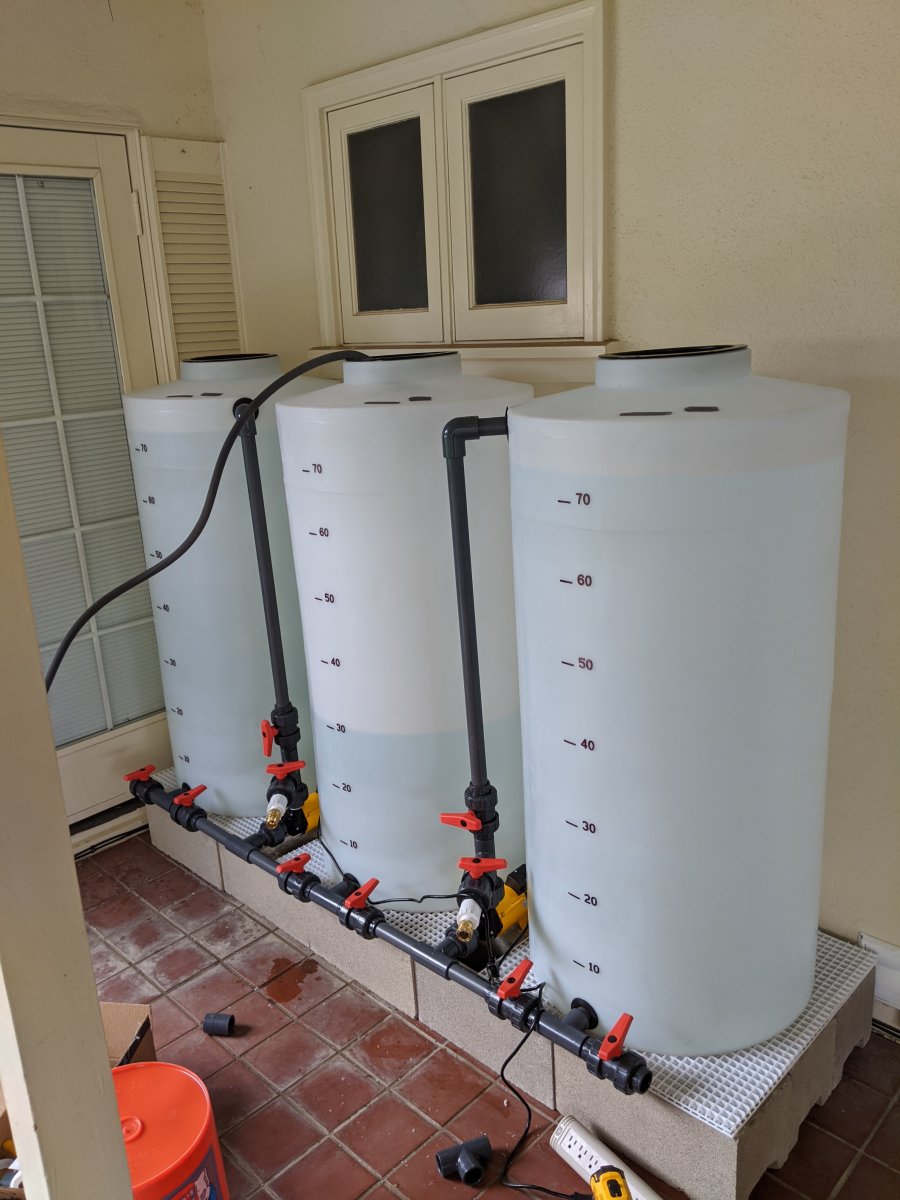 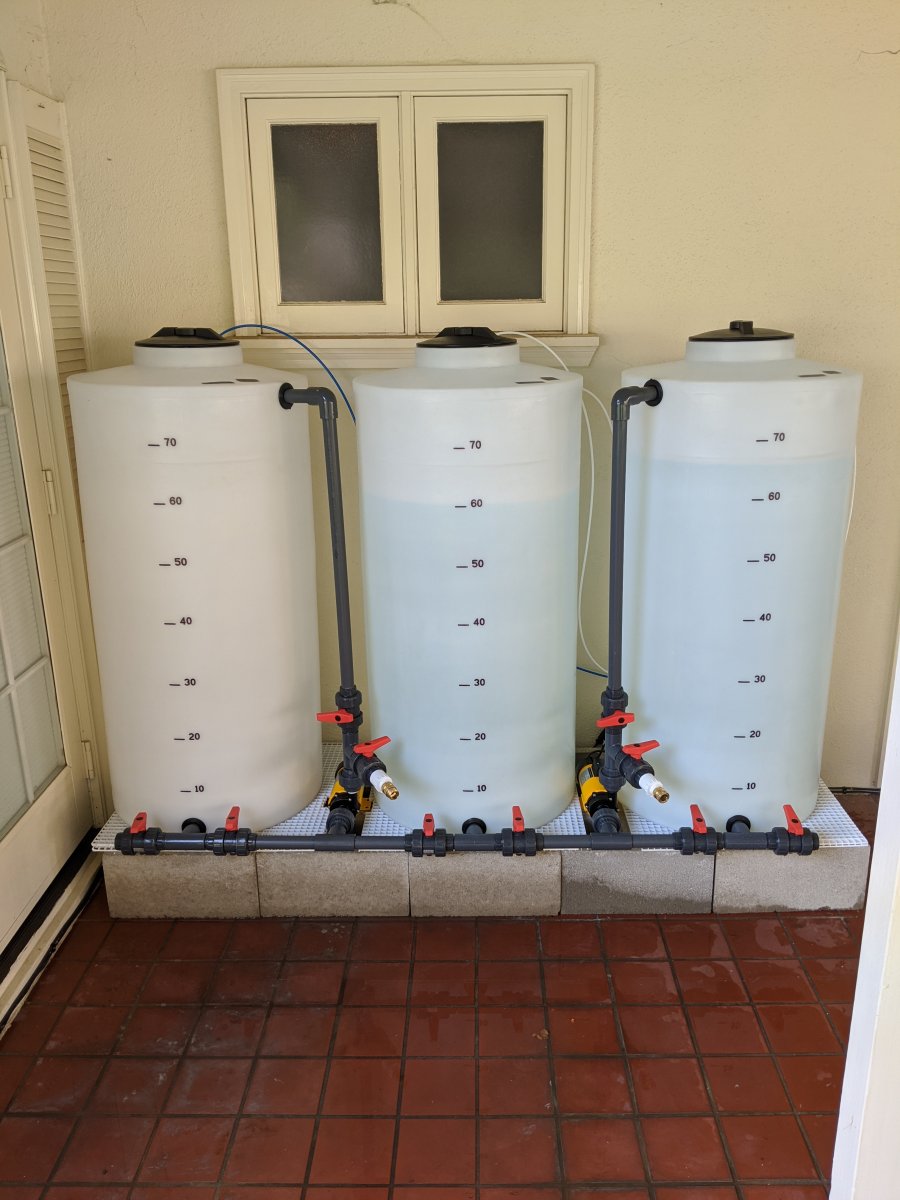 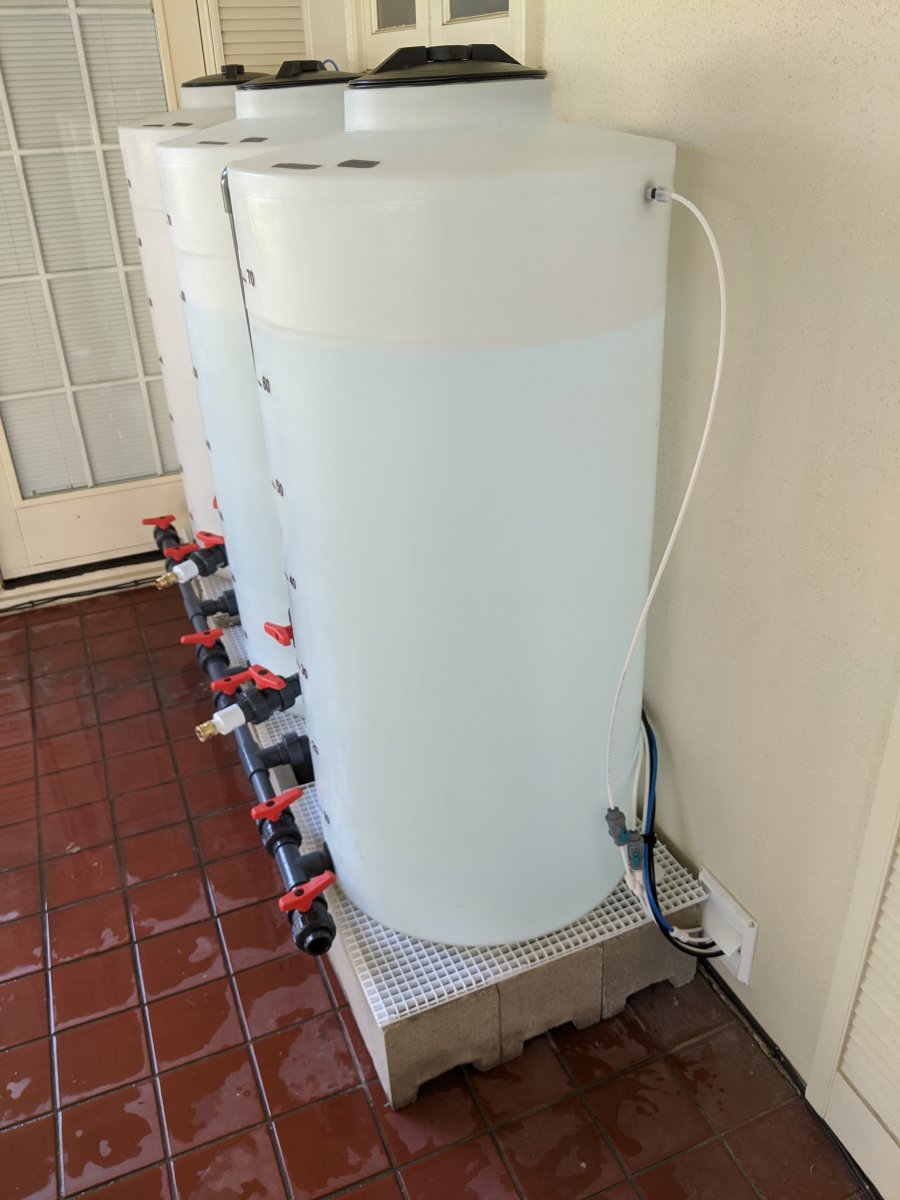 First thing to sort out was water changes. Previously to this, the largest tank I owned is a 20 gallon so I very quickly decided there was no way I was going to do manual water changes on a 200 gallon system, even if SW water changes are relatively smaller. I decided to take this time to upgrade my freshwater water change situation and set up the reef for auto water changes in the future.

Before this I was using a BRS 6 stage rodi system that fed into brute trashcans for my freshwater water changes. I purchased 3, 75 gallon water storage containers and plumbed them with 2 panworld pumps. I decided to add the extra container compared to most mixing stations I see to store remineralized freshwater for my planted tanks. From left to right, the tanks are Salt, RODI, remineralized fresh. I use a extra long python w/ a quick disconnect to quickly do large water changes on my planted tanks. The RODI and Salt containers have lines in them that will be connected to the ATO and AWC system on the reef tank.

This was my first experience with pvc and plumbing. I was very VERY happy when I tested and nothing leaked. 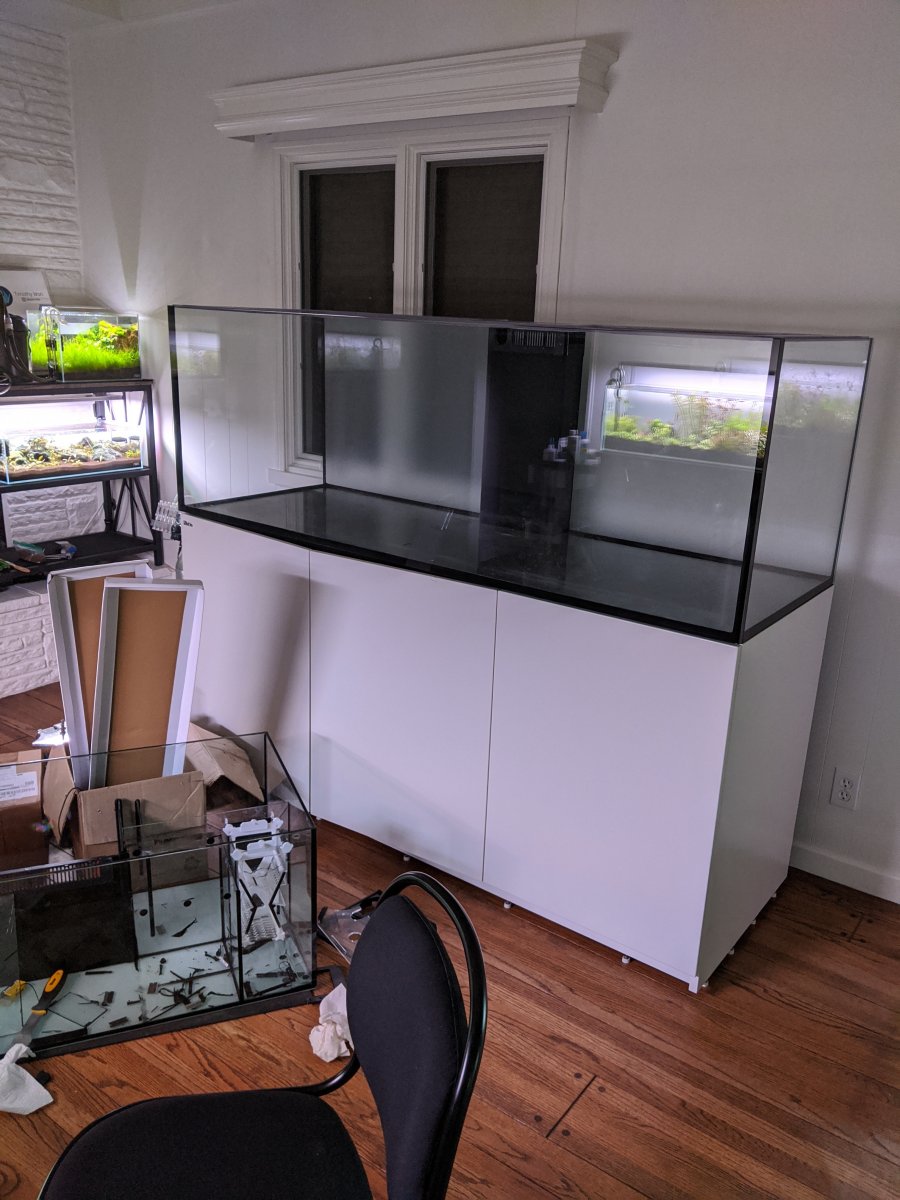 I added the frosted background to the tank. Also decided I was going to redo the red sea stock plumbing and cut a lot of panels out of the stock sump. I removed a lot for aesthetics and also to fit a filter roller. I got a great deal on a used X-filter from u/Aquius that is working out great. 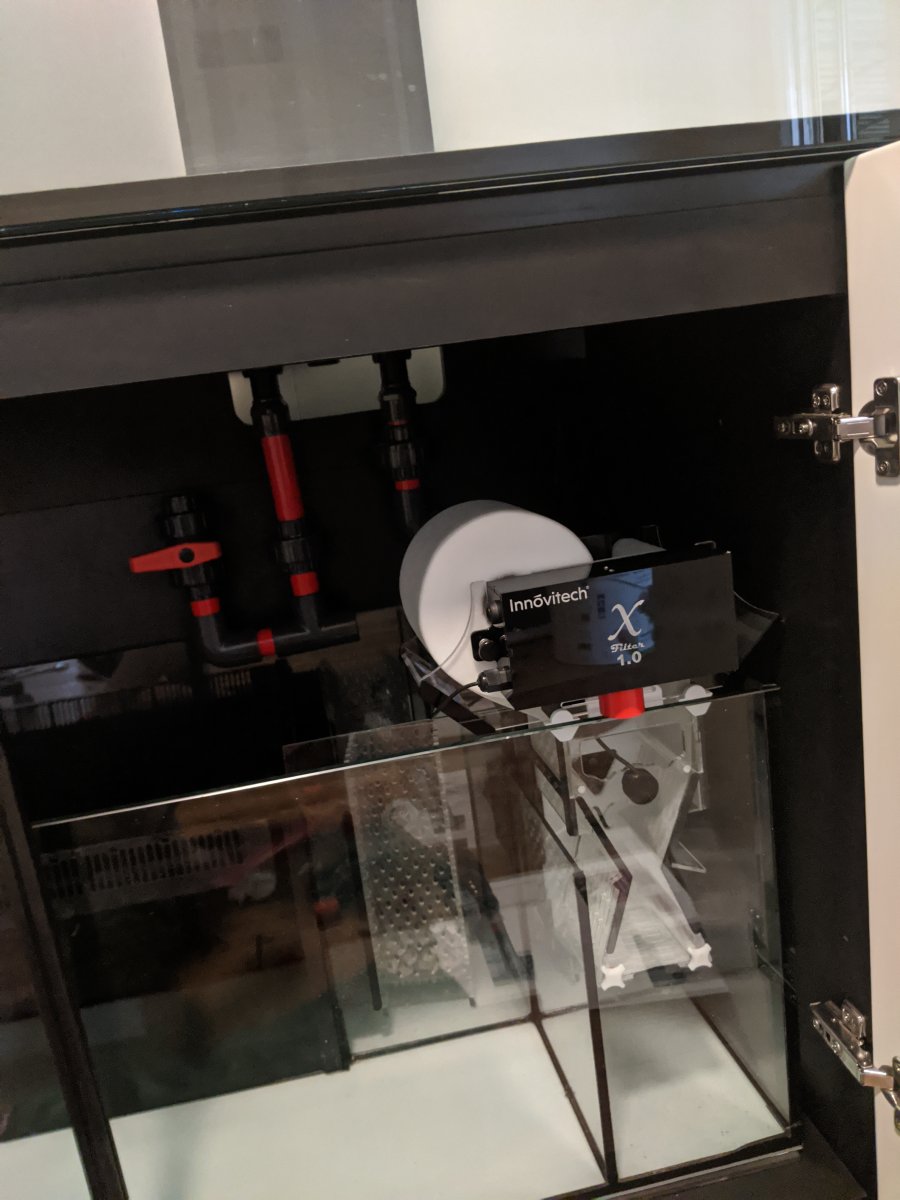 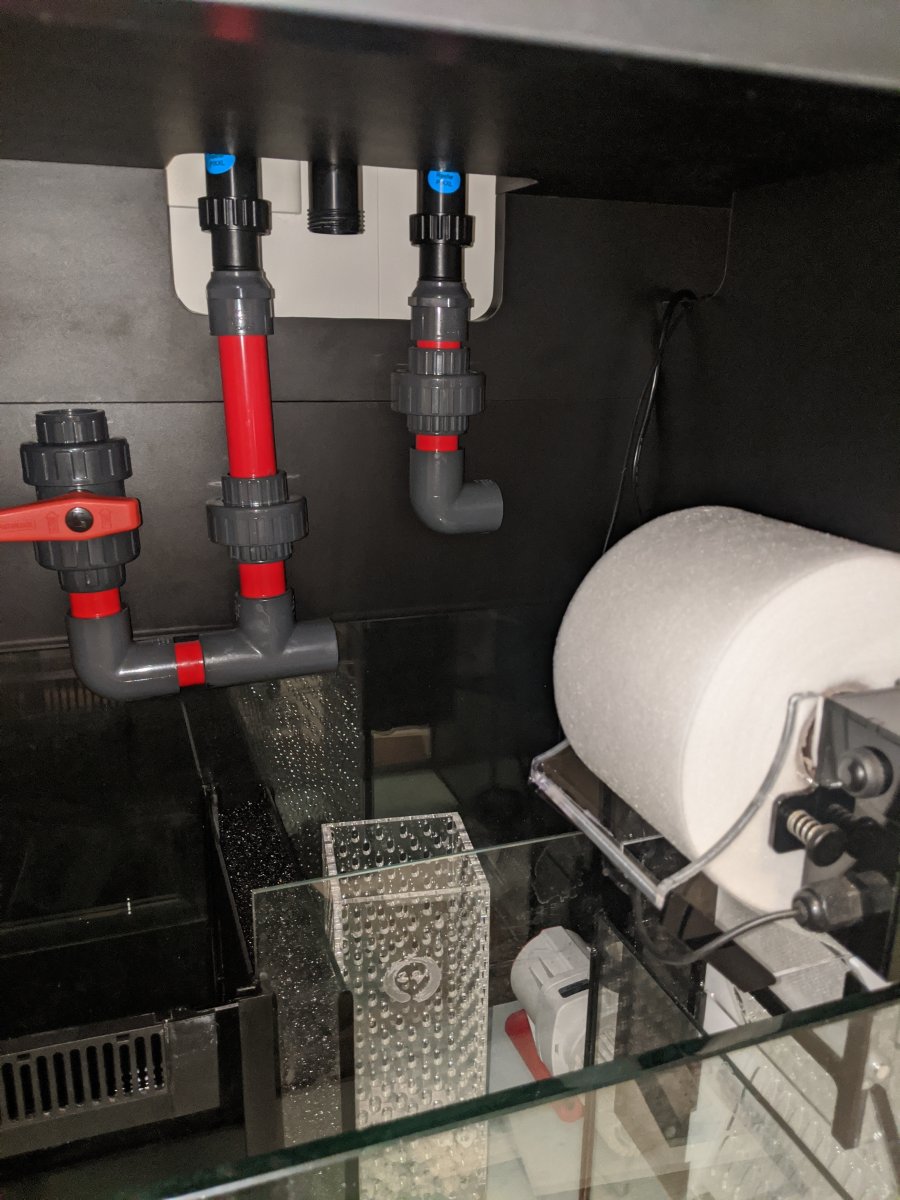 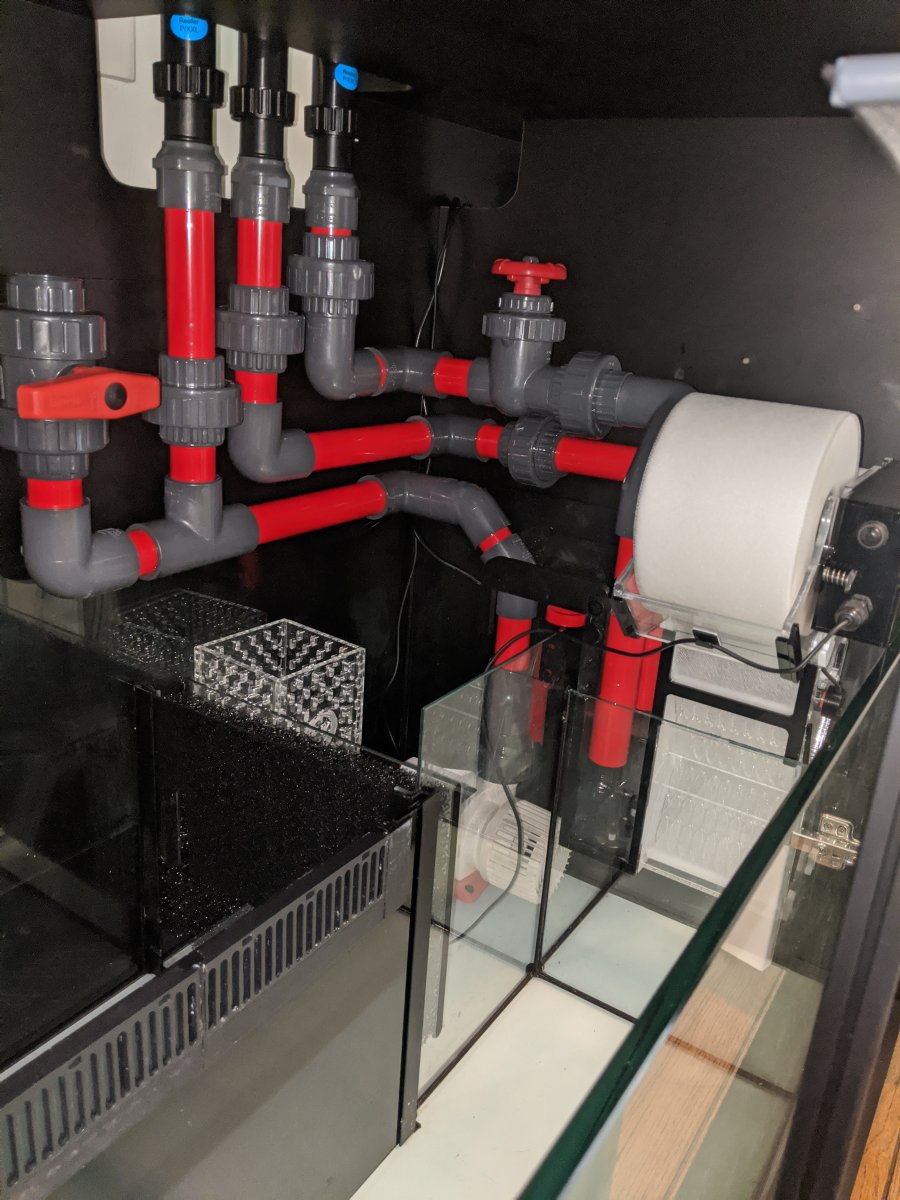 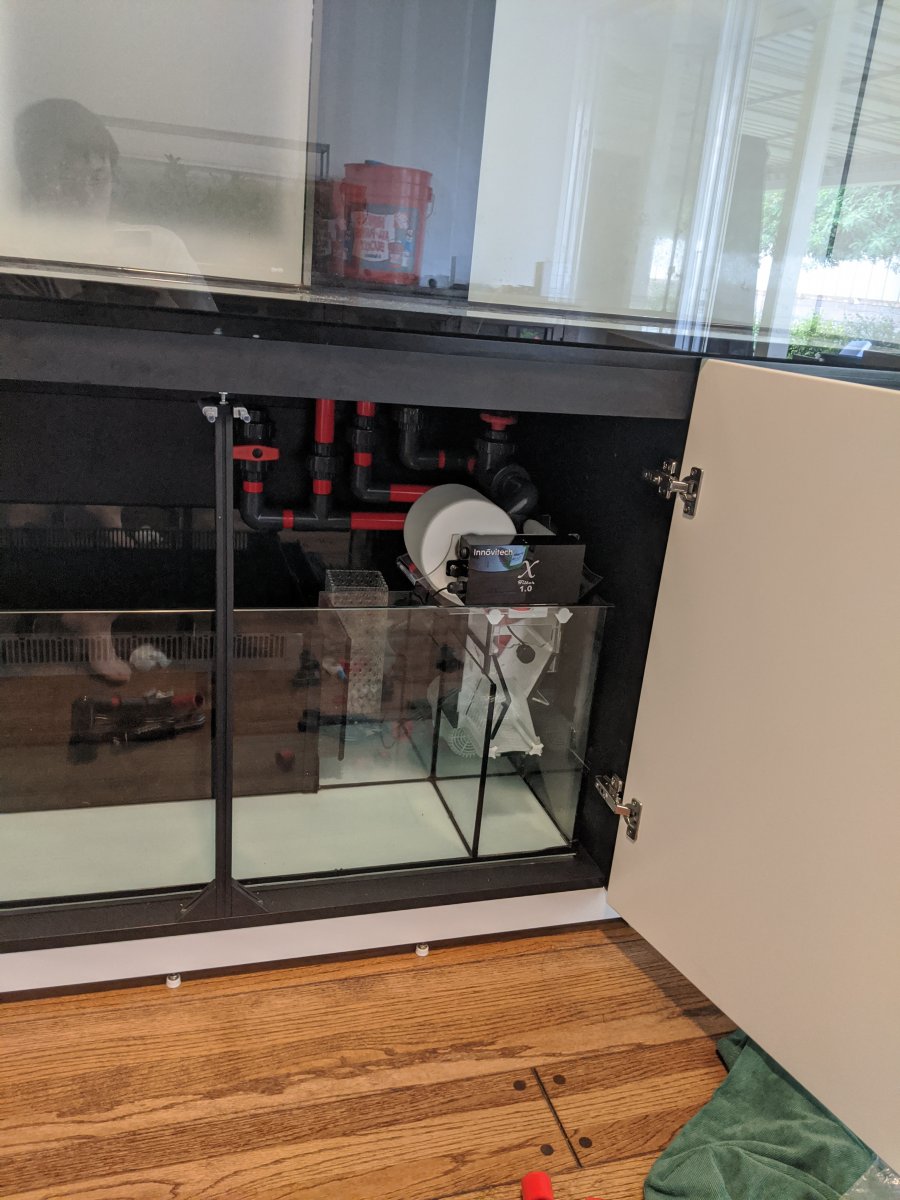 Here I converted the Red sea stock plumbing to standard and designed my own plumbing. Heavily heavily inspired by u/Whip 's buildthread.

I am wishing to document my journey with you all. Hopefully there will be more up’s than down’s, but willing to share (and learn) nonetheless. I’ve always seemed to acquire secondhand reef tanks, but this will be my first new one. I decided to start from scratch and get a brand new Red Sea...

I was very annoyed as I planned to dry fit everything but then quickly realized it wouldn't work because of the flanged ends on pvc fittings. It is very much not perfect but it is good enough and doesn't leak! I'm pretty happy for my second major plumbing project. Leftmost ball valve is in case I want to add a manifold in the future. 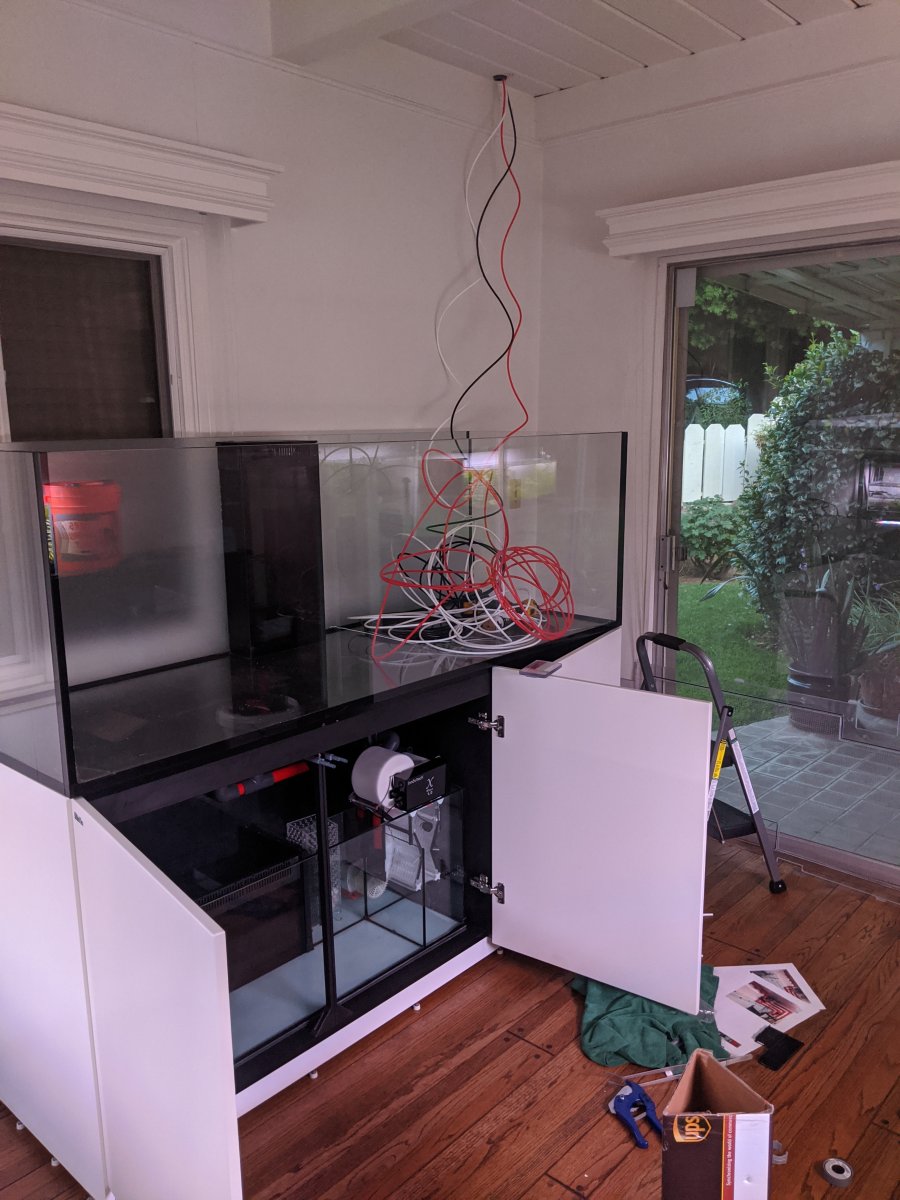 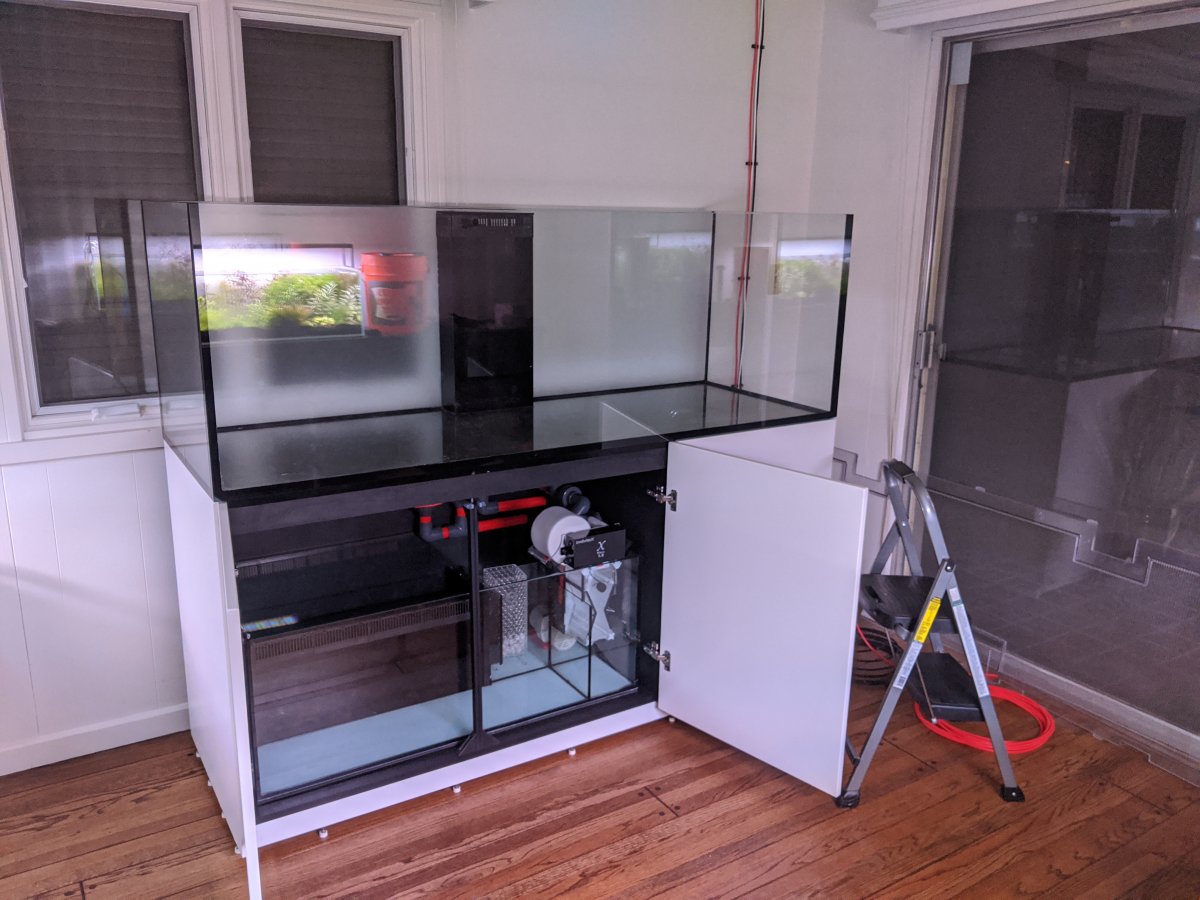 Here I added the rodi lines for AWC and ATO. They run through the attic over to the water storage containters about 50 feet. 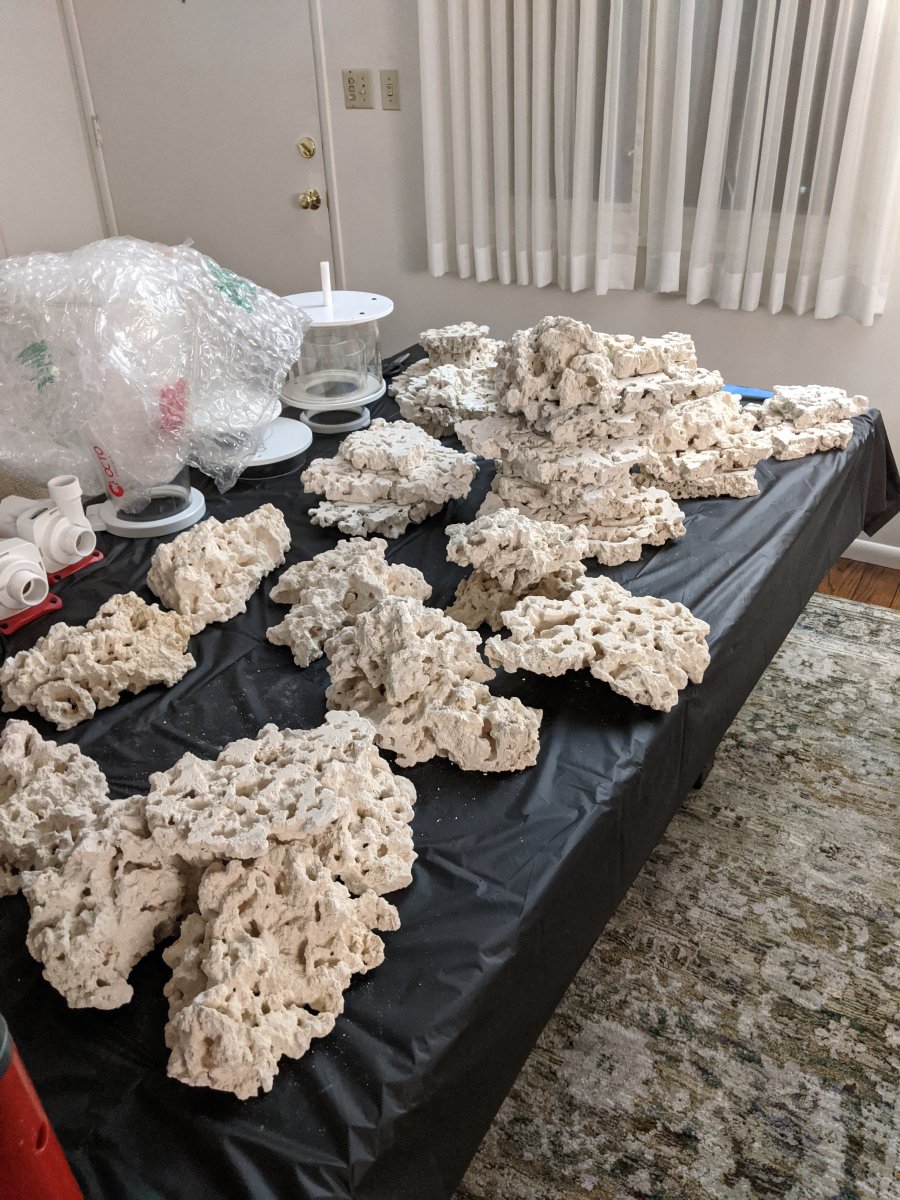 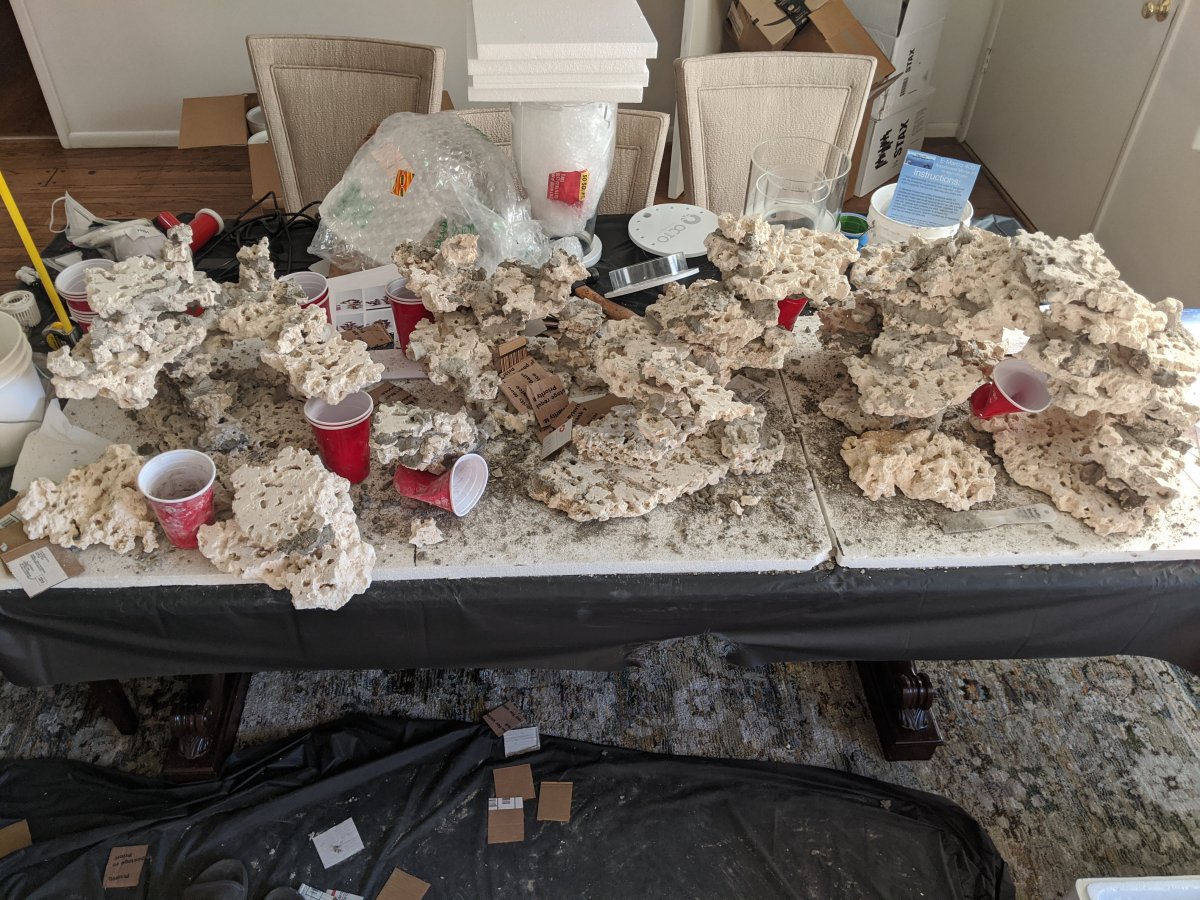 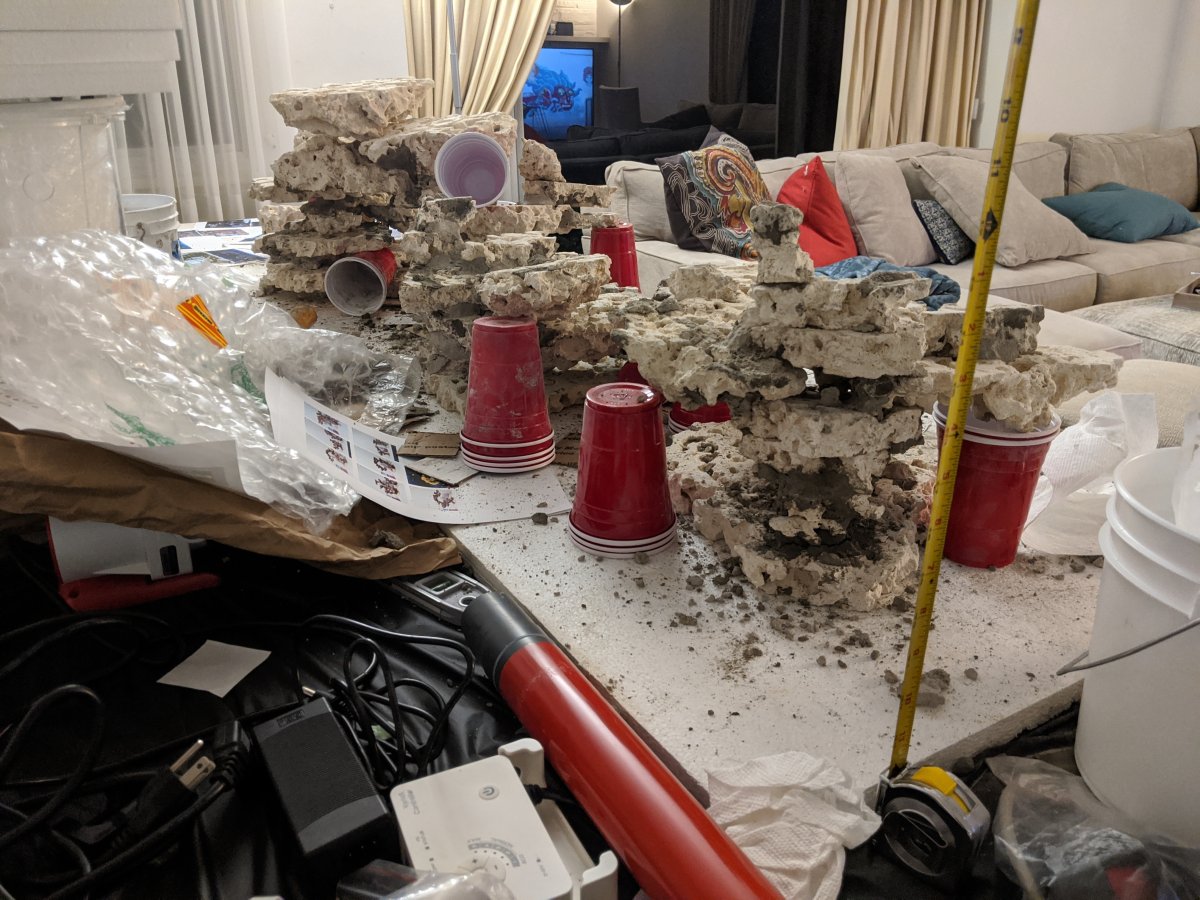 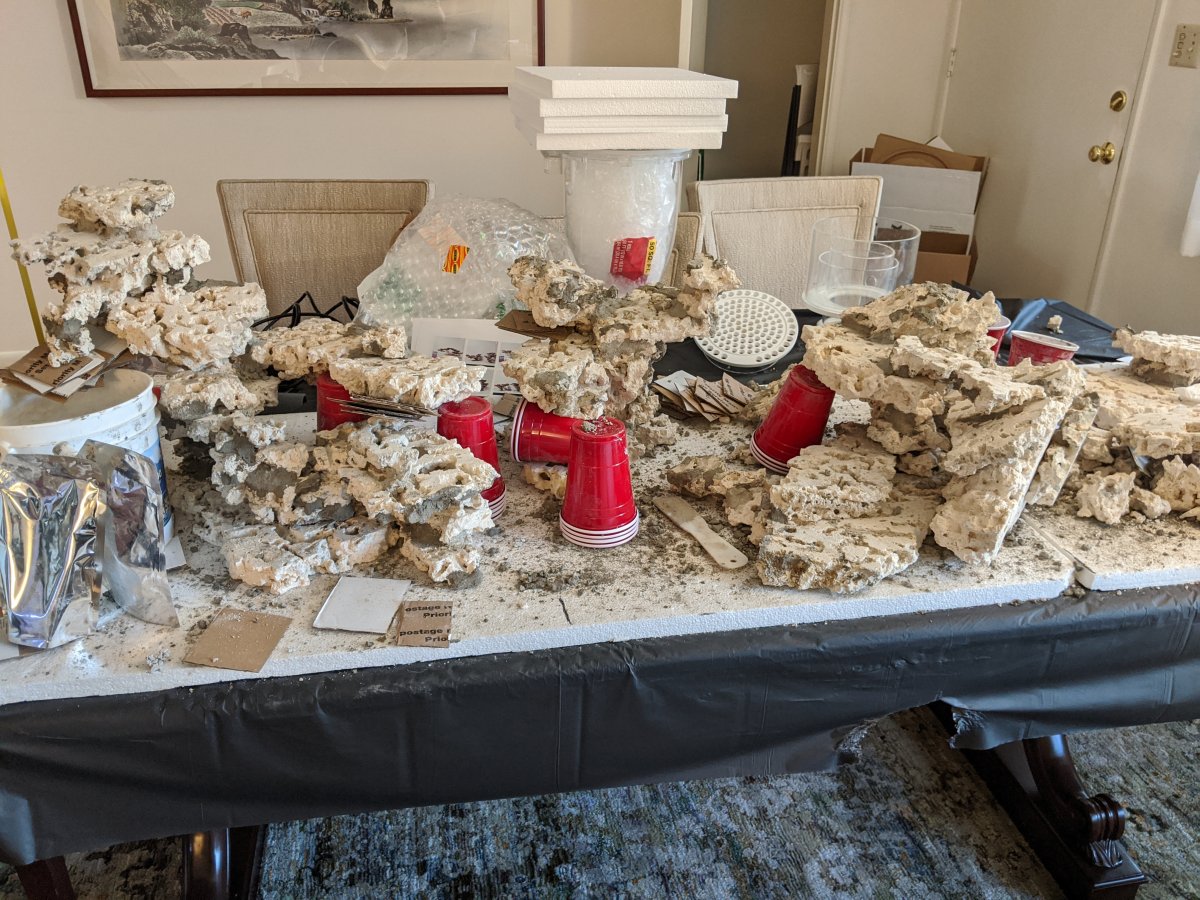 Decided to use Marco Rock Foundation Rock + STAX rock because of inspiration from u/chefjpaul buildthread.

AIO Build - Stax of Rocks in a Glass Box

So, another build in the works, hopefully the last for a long while. I had to break down my Elos 120 due to a flood issue and my wife and downstairs neighbor kind put the axe to a large aquarium with sumps, plumbing etc.. as well as the insurance company after the bill. (last build-...

First of all holy **** reef rock + Marco cement is ****ing hard to use in comparison to freshwater aquascaping. I went way too fast and was not used to working with cement at all. I broke my structures countless times. For freshwater I can whip up something in no time with super glue but this reefscape was a giant PITA and made a huge mess. I think there was a lot of user error involved as the final scape was not as strong as I was led to believe it would be from e-marco cement reviews. Even when moving to the tank, there were some breaks. So in the end I just did what I could in cobbling something together. It's going to be covered with coral eventually right? xd 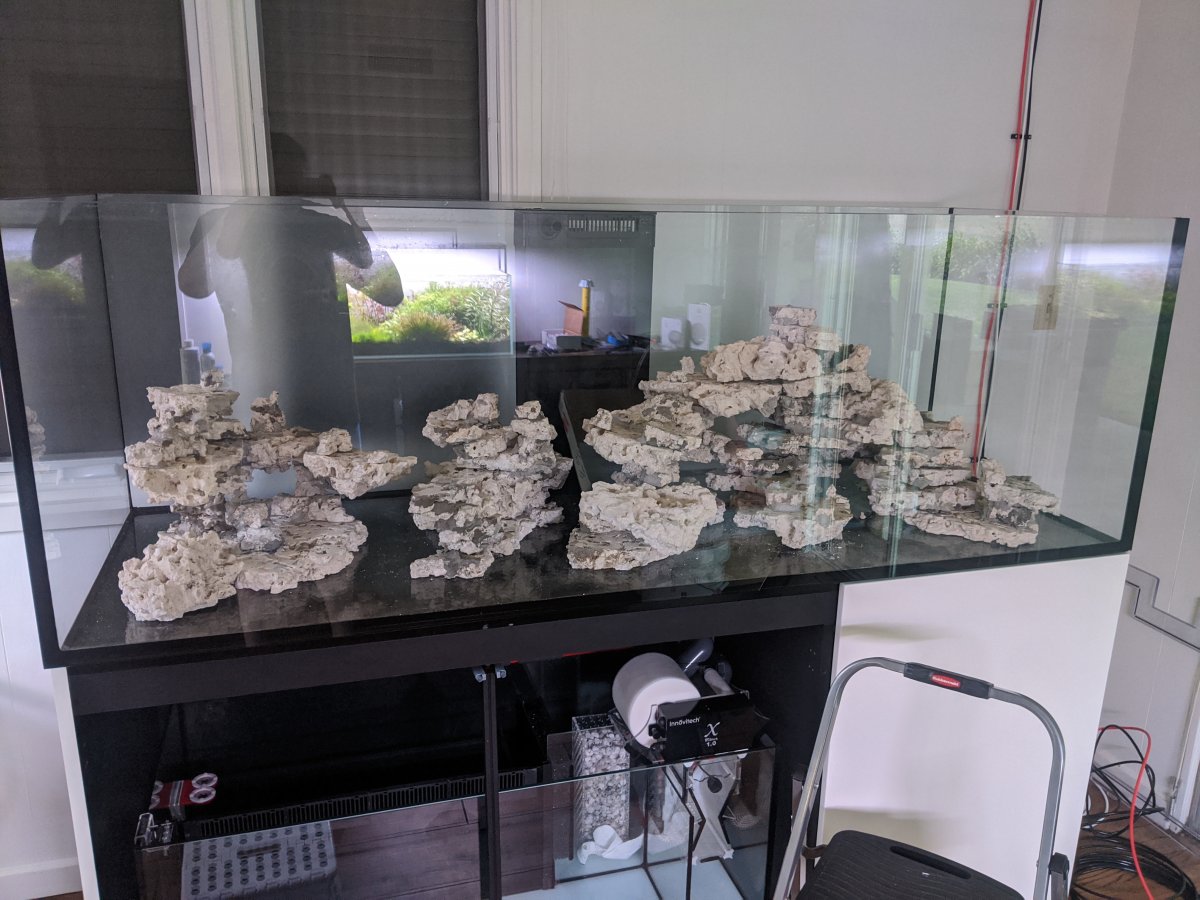 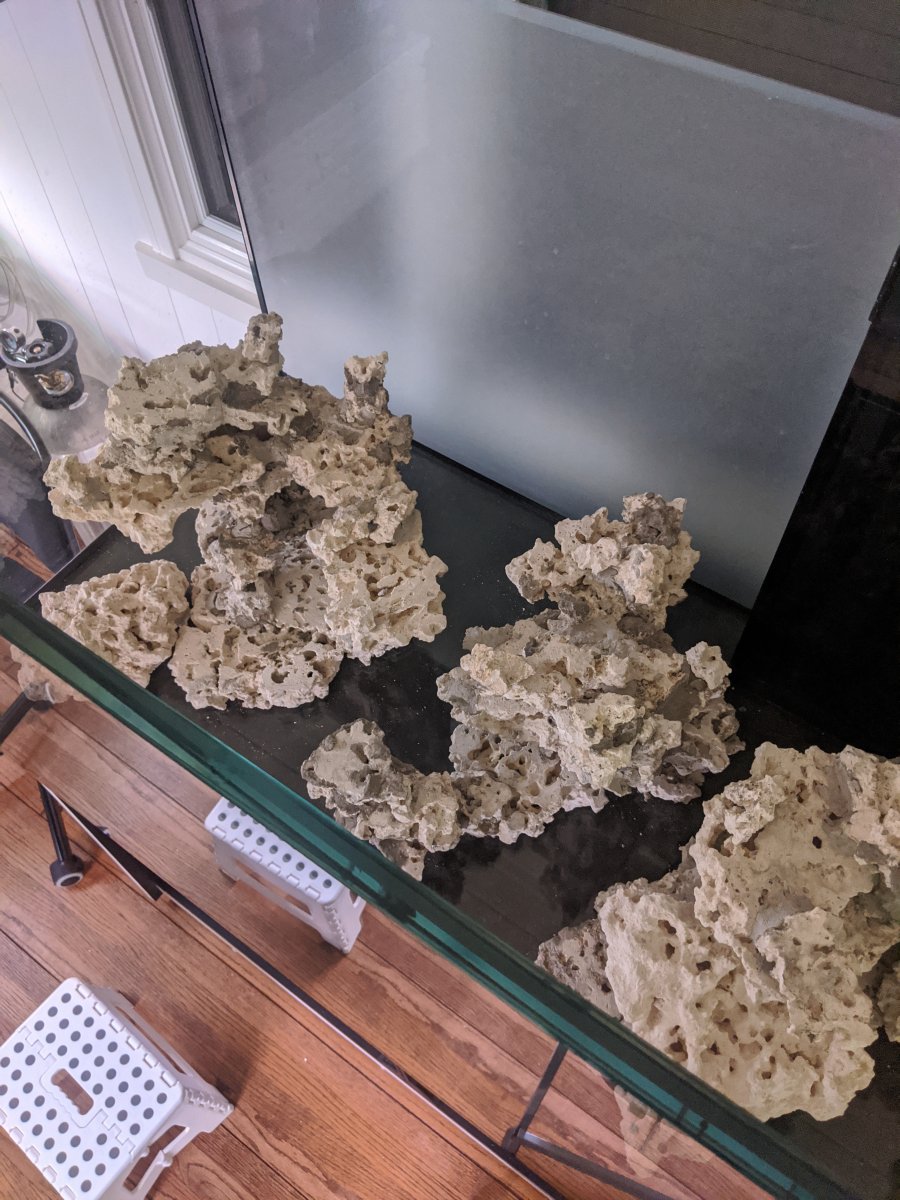 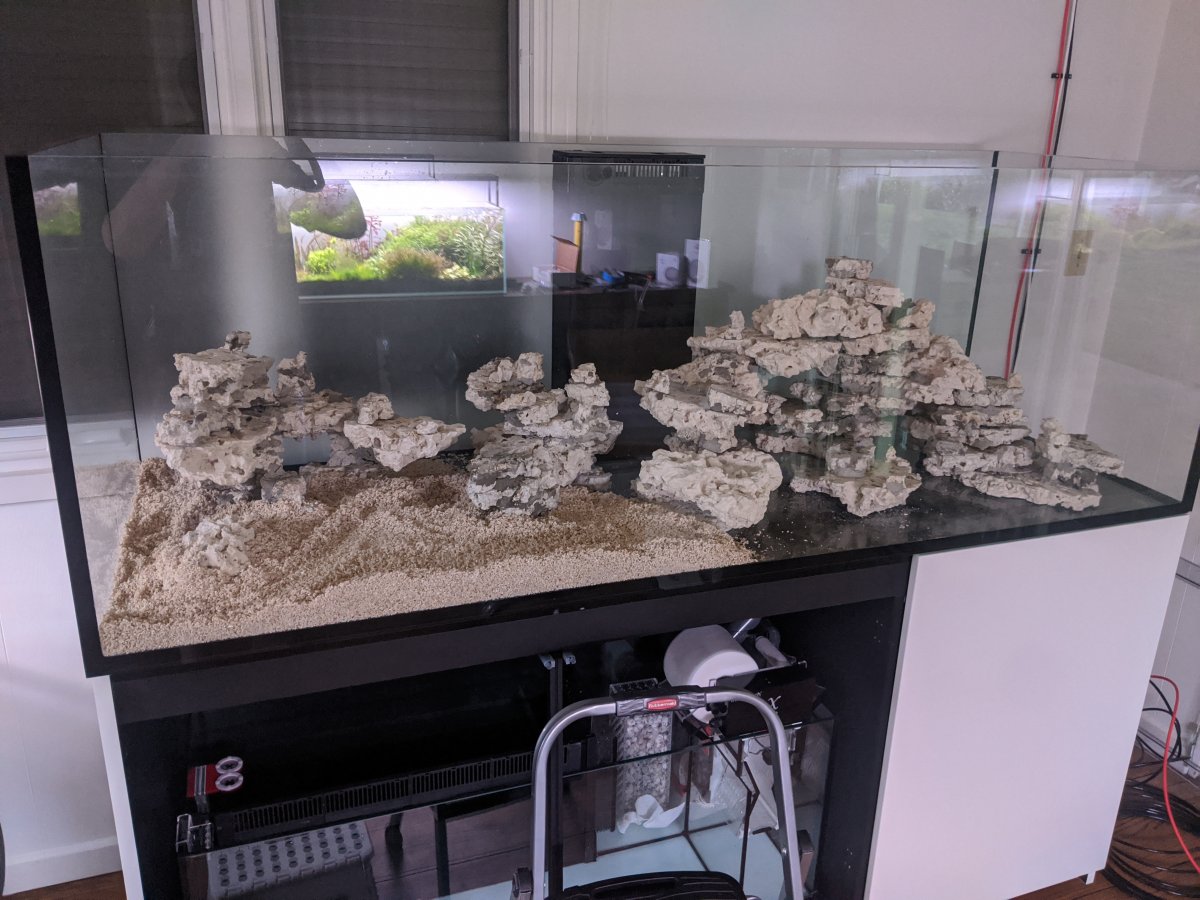 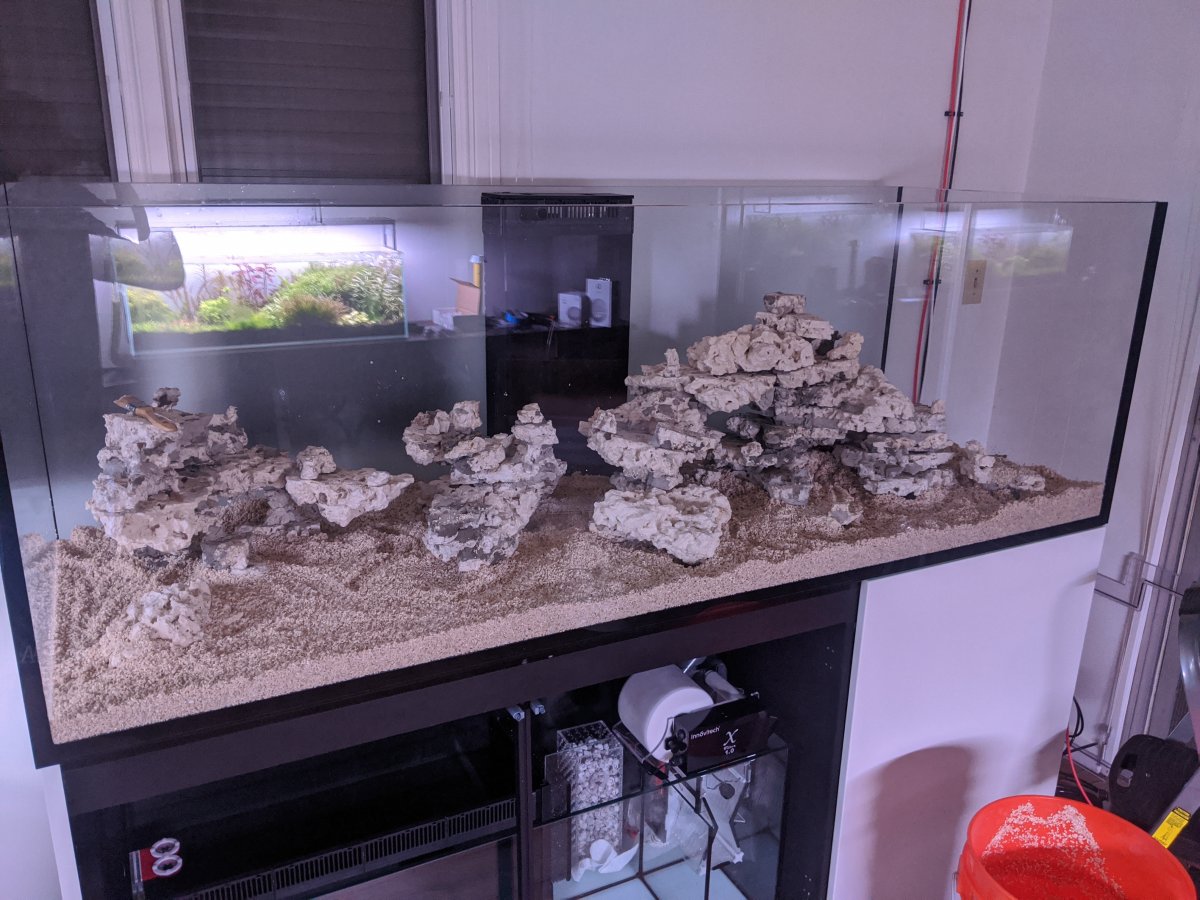 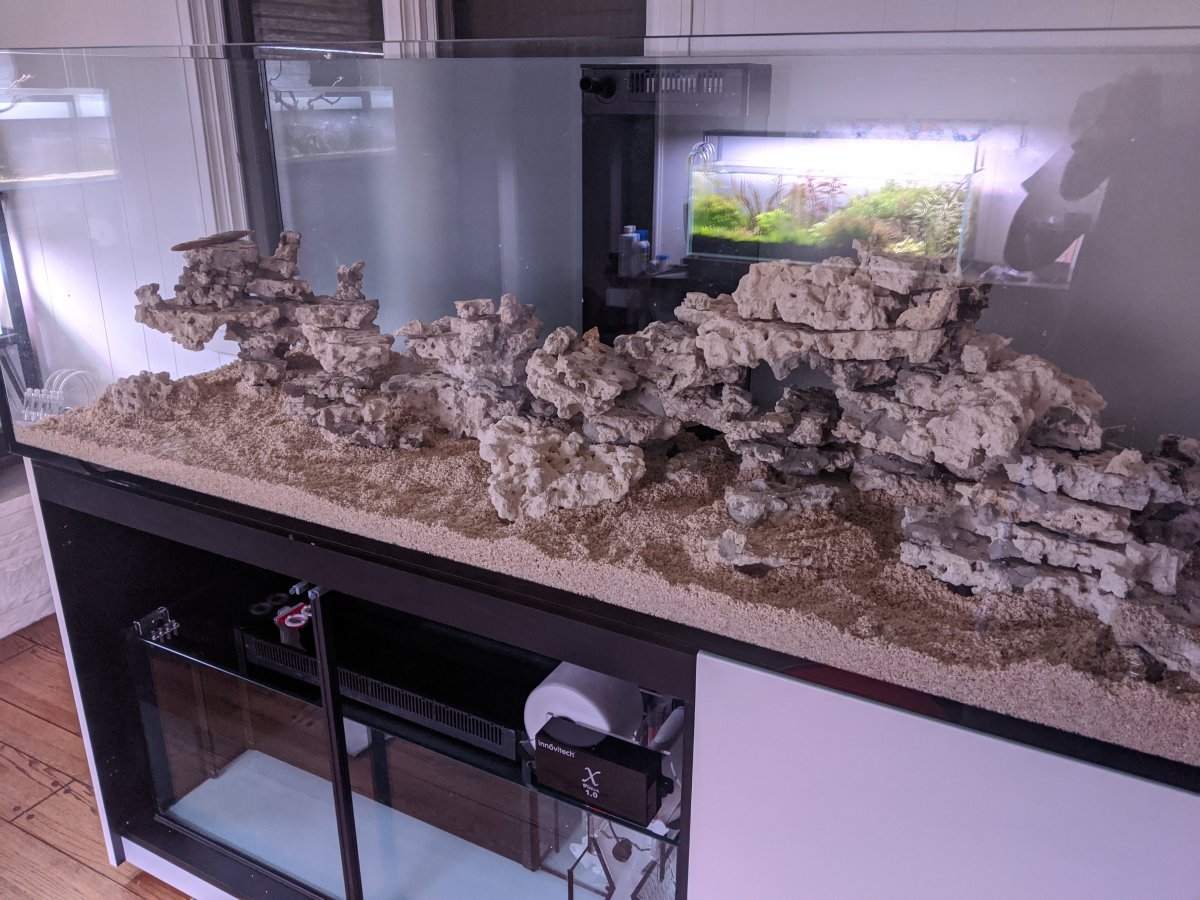 Transferred the scape and filled the tank with Tropic Eden Mesoflakes. 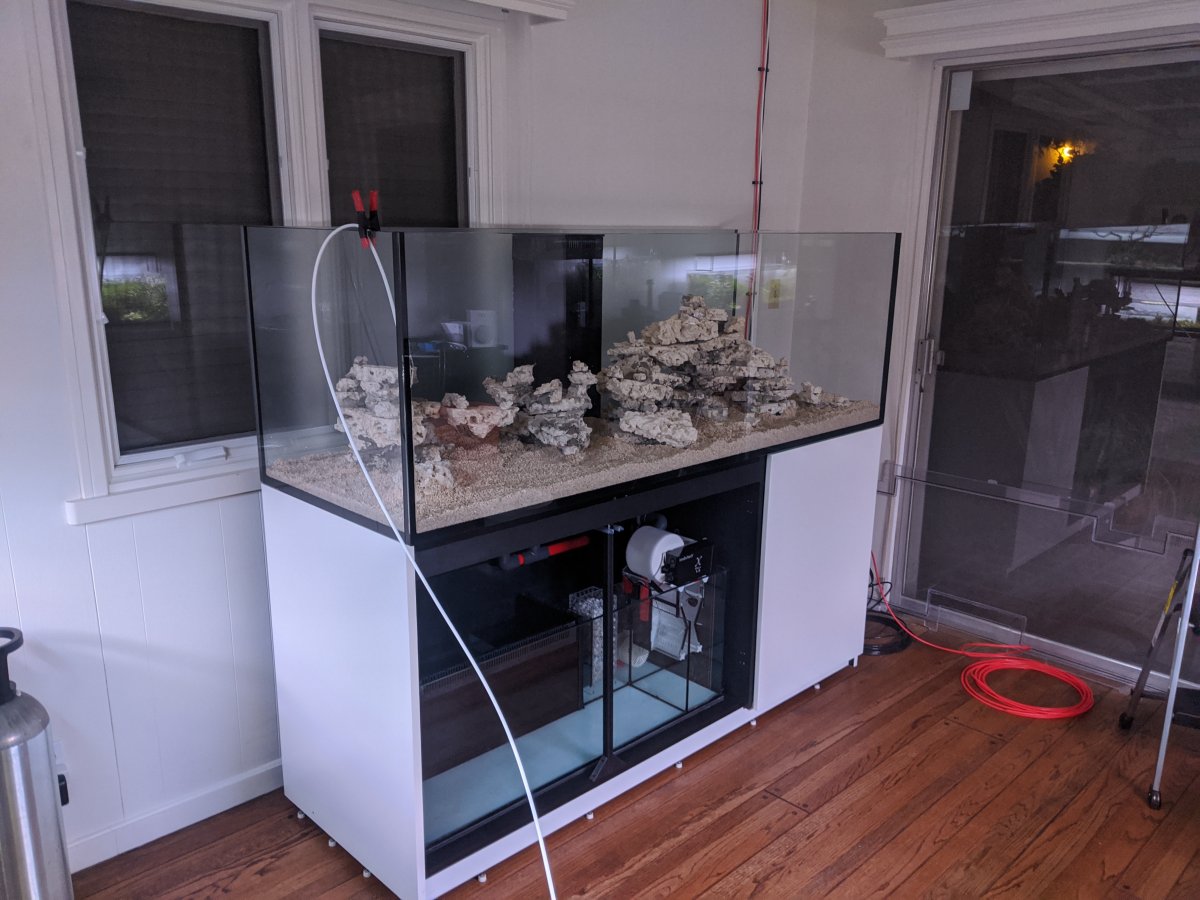 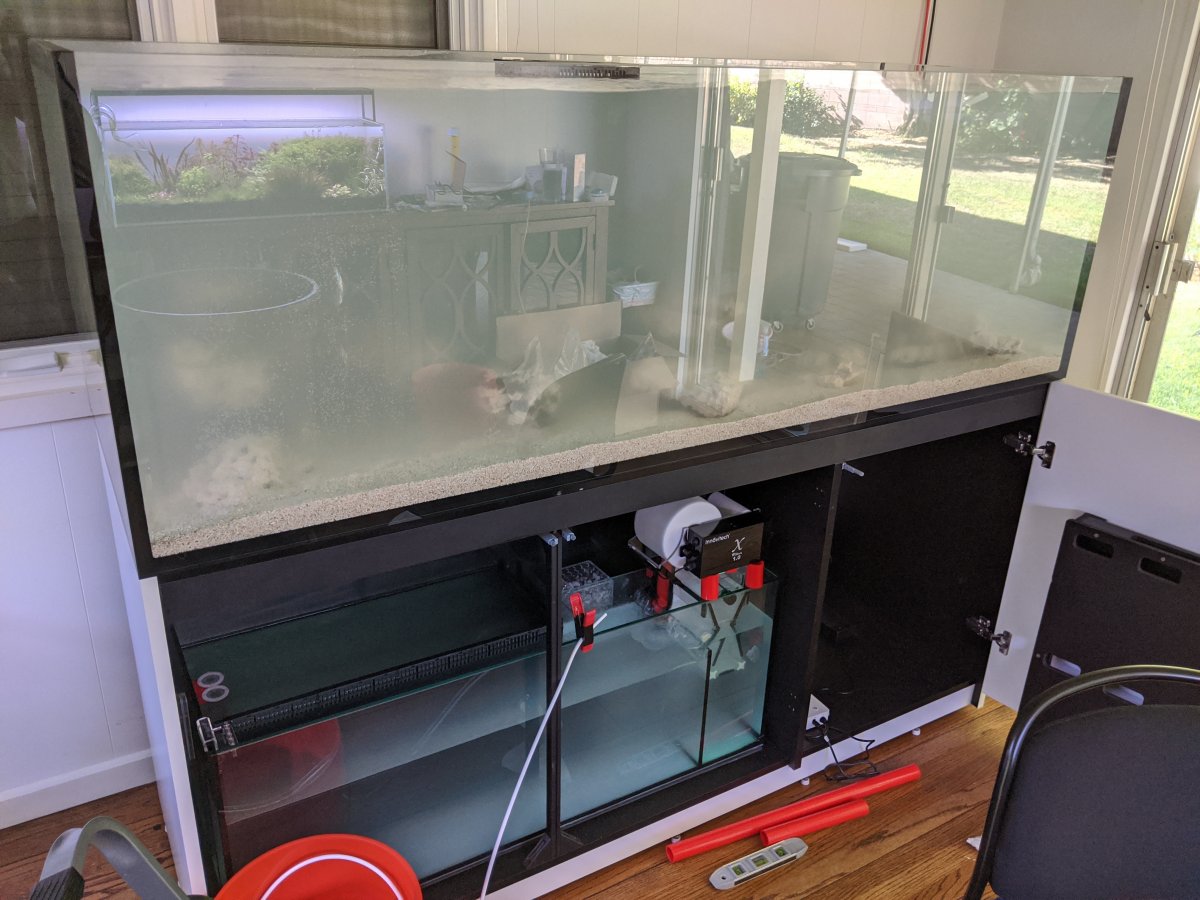 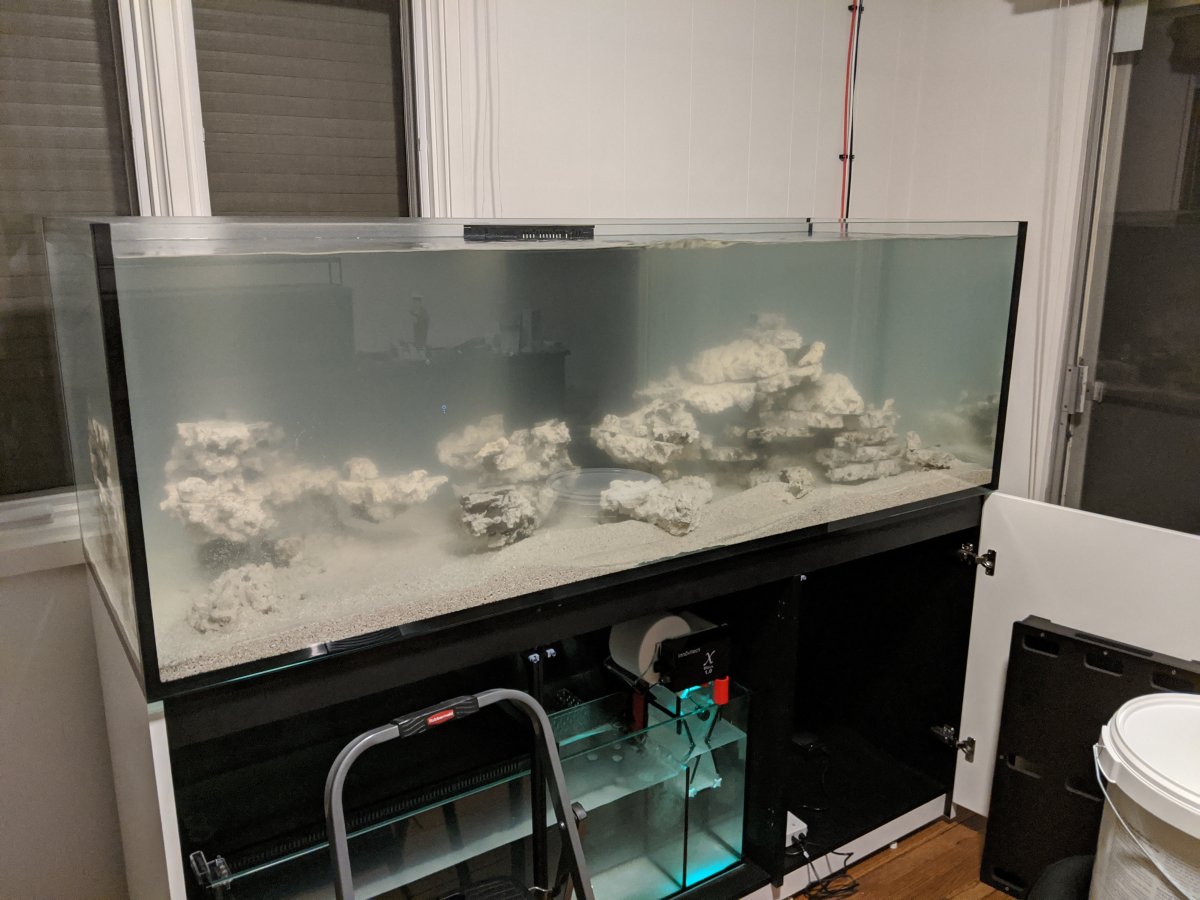 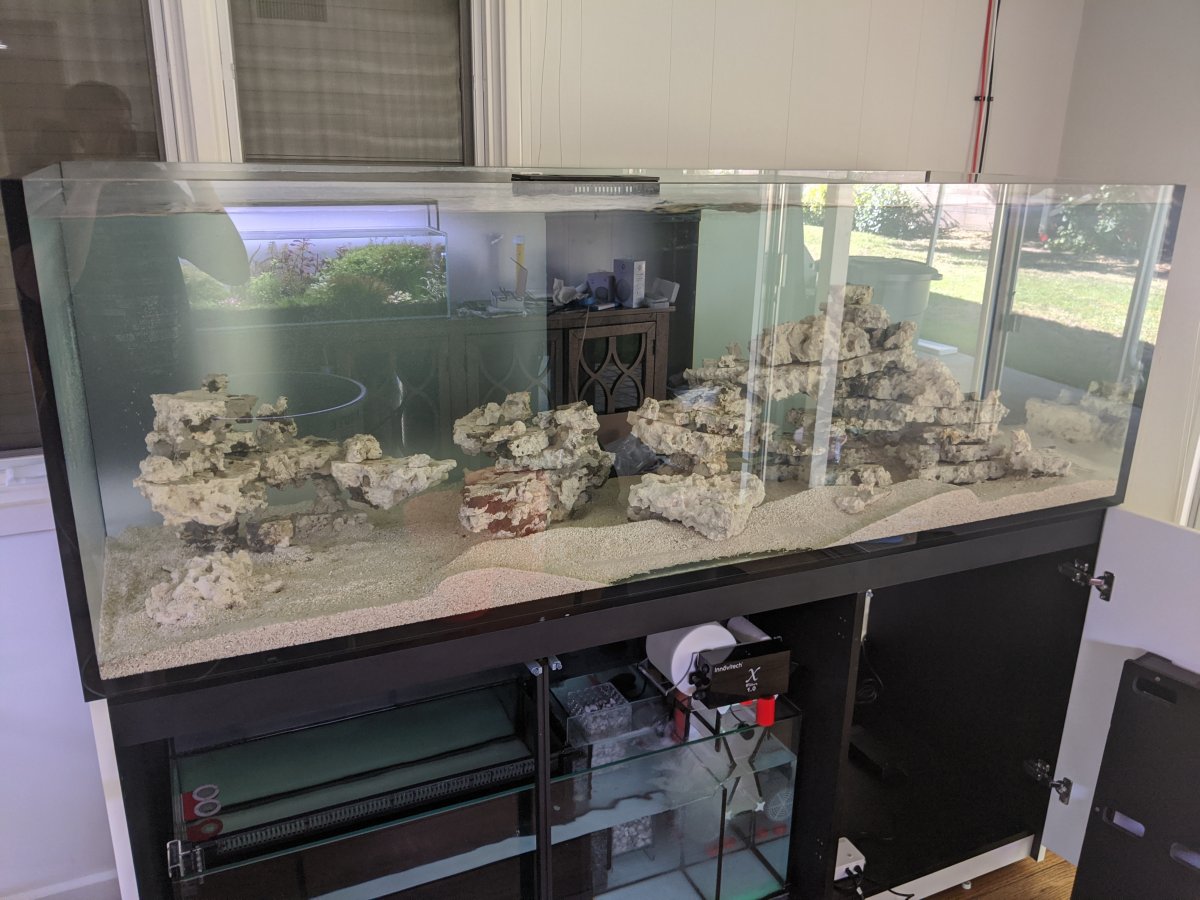 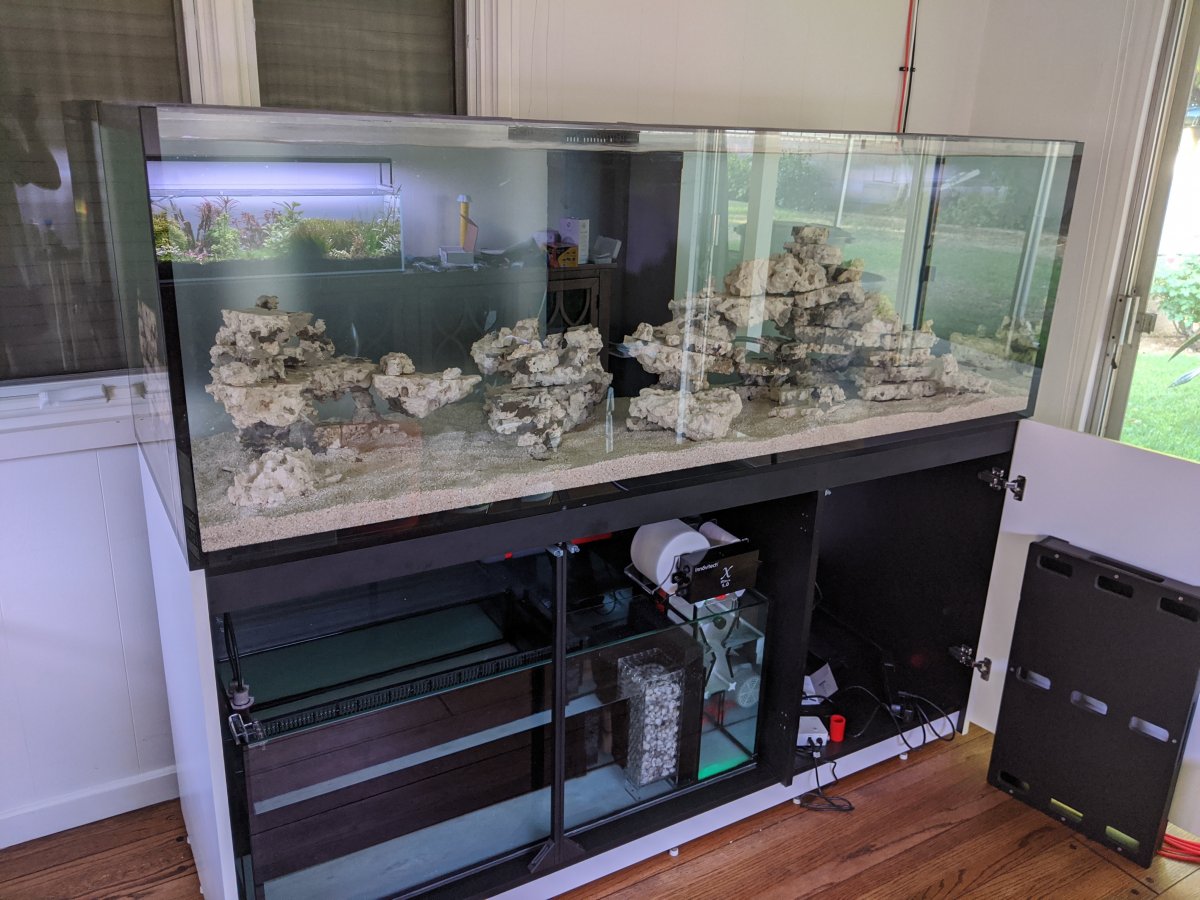 Here is where we are today. Tank is cycled and I am looking to add fish in the next couple of weeks. I plan on running FOWLR for a couple months while I let the tank mature and figure out what lights I want to buy.

I plan to purchase my fish pre-quarantined from Ocean Devotion in LA as I do not have the time or the space to quarantine my own fish. 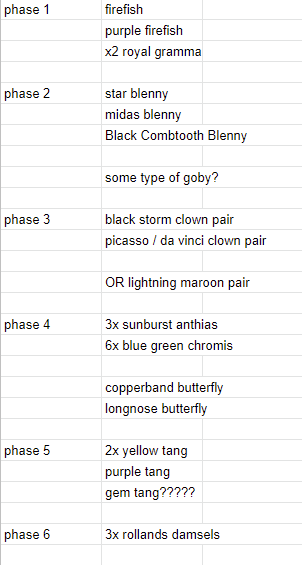 This is my tentative stocking guide. Open to any and all suggestions on how to move forward with equipment, fish, and corals.

Looks great! I'm jealous. I suggest you consider adding a backup pump or provision for one. Also, you have to think about an Apex controller and provision for dosing pumps.
OP

NoFoolin said:
Looks great! I'm jealous. I suggest you consider adding a backup pump or provision for one. Also, you have to think about an Apex controller and provision for dosing pumps.
Click to expand...

What do you mean by provision for one? I looked into having dual return pumps but it seemed too difficult to make work in the stock sump and plumbing situation. I think I will have somet type of controller/monitor and just keep a backup return pump on hand.

Poochaku said:
What do you mean by provision for one? I looked into having dual return pumps but it seemed too difficult to make work in the stock sump and plumbing situation. I think I will have somet type of controller/monitor and just keep a backup return pump on hand.
Click to expand...

By provision I meant an easy way to attach one in the future like a valve hookup similar to a manifold.

I feel bad, my cellphone camera got scratched up so I haven't really been taking pictures.

Lastly, I decided to set up an entirely new coral quarantine system in my closet. It's a 30 x 20 inch frag tank lit by a Radion G5 XR30. Have a handful of frags that are doing really well. I had a minor RTN episode with a couple sps frags because of a rockflower anemone that got shredded in a gyre but I think i've recovered from that episode. I finally got Ecotech versas in to set up the AWC and ATO systems. I plumbed the frag tank in series after the display so that water is only shared one way from the display to the frag tank. Running a 7ml/minute AWC which gives approx 33% WC per month on the display and 95% WC per month on the frag.

There's been a lot of work done, I have a lot of livestock coming in soon and lights will hopefully be on the display within 2 months. I'll try to get some more photos...

P
Large Build Best and worse thing you have done on your large system?