Hello fellow reefers! This is my first ever post and will also be a build post too. A little intro about me. I started getting into reefing about 8 years ago, before that I was into freshwater aquariums and kept angelfish, had some breeding projects as well. I got interested in reefing after my wife asked me to down size from the 10+ thanks I had to just one. I picked up a Reefer 250 second hand bad have been burning money since then. I sadly killed a lot of fish and coral but have been getting better and been able to keep a few alive.

Anyways I'm starting a build post to share the progress of a new tank my wife surprised me with. It was a week before father's day and I came home to a little treasure hunt put on by my wife and kids. A Red Sea Peninsula 500 Deluxe kit was at the end of the hunt. However, as I opened the crate it turned out that the tank delivered was not a peninsula but rather a Reefer 425 G2. Had to work with Red Sea to get the correct tank delivered - took about a week. I had a great experience with the rep. and received the correct tank on Father's Day.

As I began opening the boxes for the cabinets. To my dismay, I found out 4 of the 5 exterior panels were cracked at one corner. Submitted another ticket with Red Sea in hopes to get this resolved as soon as possible.

Needless to say, my build is on hold. I have a half built cabinet sitting in the dining room, a huge pile of reefing equipment next the front door, and another pile with the crate in the garage.

I'm itching to get the cabinet built and the tank put in place. It will be a while yet before water is put in, let alone rehoming the fish and coral from the 250.

For this build I've gone with all Red Sea equipment - wherever possible. I appreciated the quality of the 250 and the simplicity of their supplement s like reef energy and colors programs. I have many more products to try out now that I have a better understanding. With their recent dive into a smart ecosystem. I thought I'd use their equipment on this new build. Most of the tech reflects what I've become used to. I had Maxspect gyre pumps and Kessil lighting on the 250. So their systems wouldn't be too different.

For controllers I decided to go with a CoralVue Hydros Control 4 Starter pack - on order. I decided on this controller as it provided the flexibility with the smart controls already available with the Red Sea stuff. I plan to use the Hydros as a third fail safe for the heaters if they stick on and the Ink Bird malfunctions, shutoff skimmer of skimmate overfills, ATO shutoff if the Tunze osmolator float switch fails, and as a shutoff for the return pump should something clog the drains.

In my 8 years reefing, I've been fortunate enough to not have any catastrophic failures, aside from my own user error. The failsafes I am putting in place should help with my user errors.

I hope Red Sea gets back to me soon about the cabinet doors. For now here's some pix of my progress, or current mess, and the goodies. I had to lay out all the Red Sea equipment. 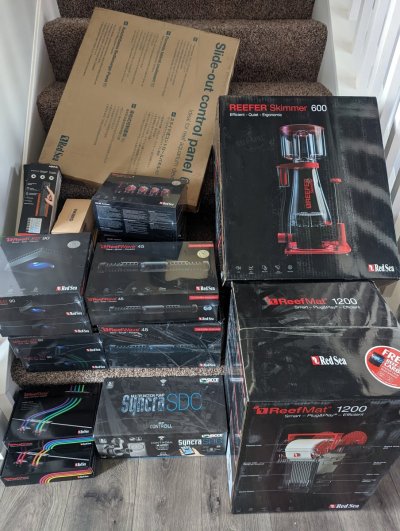 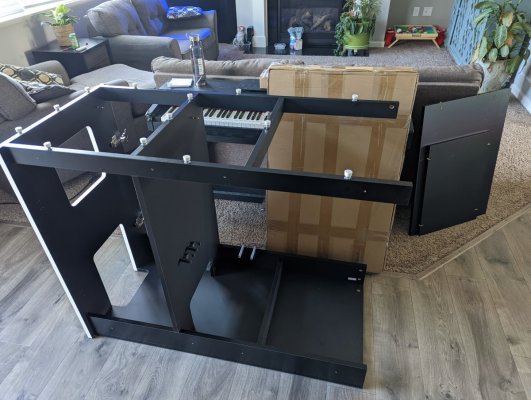 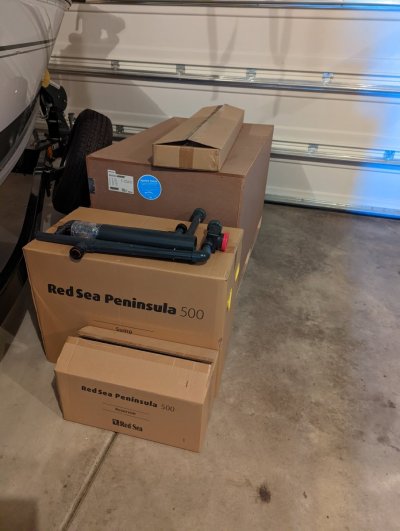 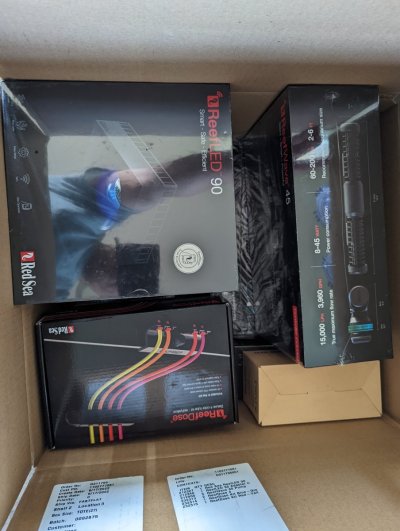 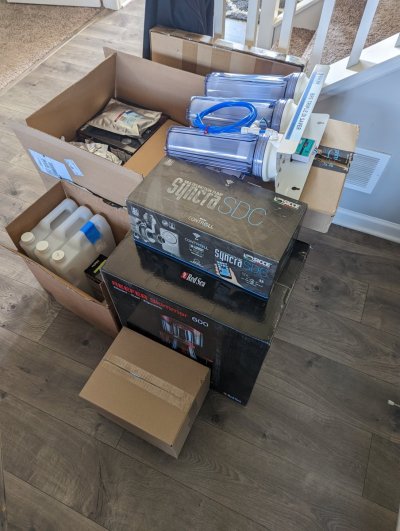 Oh and here's a pic of my current 250. I had recently restarted the whole tank after having mushrooms overtake the tank - due to my neglect and after multiple unsuccessful attempts at controlling it's spread. I kept just the torches.

Got some more goodies in today. The Hydros Control 4 Starter kit. I grabbed a skimmer sensor and two water level sensors to provide the extra failsafes as mentioned before.

Also, Red Sea is sending out new cabinet panels. Fingers crossed I could have an empty tank and stand put together, between dinning room and family room, by end of next week.

In the meantime, I'm looking at tank covers as I do fancy myself wrasses. I would also like to collect more pygmy angelfishes.

I had an older flame and lemon peel angelfish that randomly died shortly after the tank reboot. Not sure what happened, just found the flame angelfish at the bottom of the tank swishing around by the current. The the lemon peel 2 weeks later did the same thing. Fish were hearty and eating and suddenly found dead. For the lemon peel I notice that it stopped eating right before discovering it's demise.

Is it possible that the two deaths were of old age? The two specimens we're fairly large when I got them.

However, I speculate possible ammonia poisoning due to new tank syndrome from the reboot. About half of the Matrix bio media dried up during the reboot. Tests did indicate measurable amounts, <= 0.4 before dropping to what I presume is zero. The tests with Red Sea test kit continues to show a 0.1 ammonia level after 4 months.

So I've been searching around the forum for ideas for a lid. My current 250 has a Red Sea DIY lid kit and has built up some salt creep at each connection point. Although it is working well at keeping suicide jumpers, it is a bit flimsy and can be aesthetically unpleasing when the salt creep builds up again. I see there are a few reefers here mentioning ClearView lids. I am leaning towards them as they do look really clean.

What are your long-term experiences with them?
Do they get salt creep?
Which design/style do you prefer and why?
Anyone with photos on a peninsula 500?
What would you do differently now vs when you first built it? (as far as feeding ports, and other cutouts)


I will have two gyres placed vertically beside the weir and a third gyre placed horizontally on the opposite end blowing back. I don't plan on any more cables going into the tank. I would like to get a cutout for an Ehiem auto feeder.

Finally made some progress. Red Sea has been very helpful in making sure things are right. My wife has been losing some patience though as she started the order for me almost a month ago and hasn't been happy about the delays. I've been pretty chill, I mean I got a Peninsula 500!

Anyways, I received the new exterior panels - undamaged and looking sweet. I got that cabinet finished, placed into the desired spot and leveled - will recheck again when tank is put on top. Also put the sump and reservoir in, and installed the pull out panel.

I will be installing the cabinet lighting next, then begin stripping out the filter sock holder area for the ReefMat - should have done it when it was out, but wanted to see how things fit before doing so. I'm hoping to utilize the reservoir and still have room for the ReefMat and skimmer along the back so I can get a refugium going in the front chamber. I'm thinking a macro show tank vs tumbling chaeto - will see what macro alae are available to get.

Removed the filter sock holders and baffles and got the sump layout figured out. I couldn't get the layout I initially wanted without losing the quick filter change feature of the ReefMat and keeping the reservoir. So I went with Red Sea suggested placement for left side door which still worked out. The extra sump space will be filled with Marine pure bio cubes.

I am thinking I could drill the reservoir to convert to a refugium like I have in my 250. I think this may work out better since I'm planning on having sand with macro algae. And, I thought it could be ideal as an isolation tank or even hospital in a pinch since it is a lot bigger than in the 250.

I also got the cabinet lighting installed and liking the way it works. I believe it's is an optical sensor so it's electrical so there's no clicking when it switches on/off. It also plugs right into the under cabinet lighting I got so no wire splicing. I added a master mechanical on/off switch to bypass the sensors completely.

Thinking I will put the tank on and start water leak tests before going any further. Suction cups should be here on Sunday.

Let me know what you guys think so far. Any tips at this stage or if I'm doing something out of order.