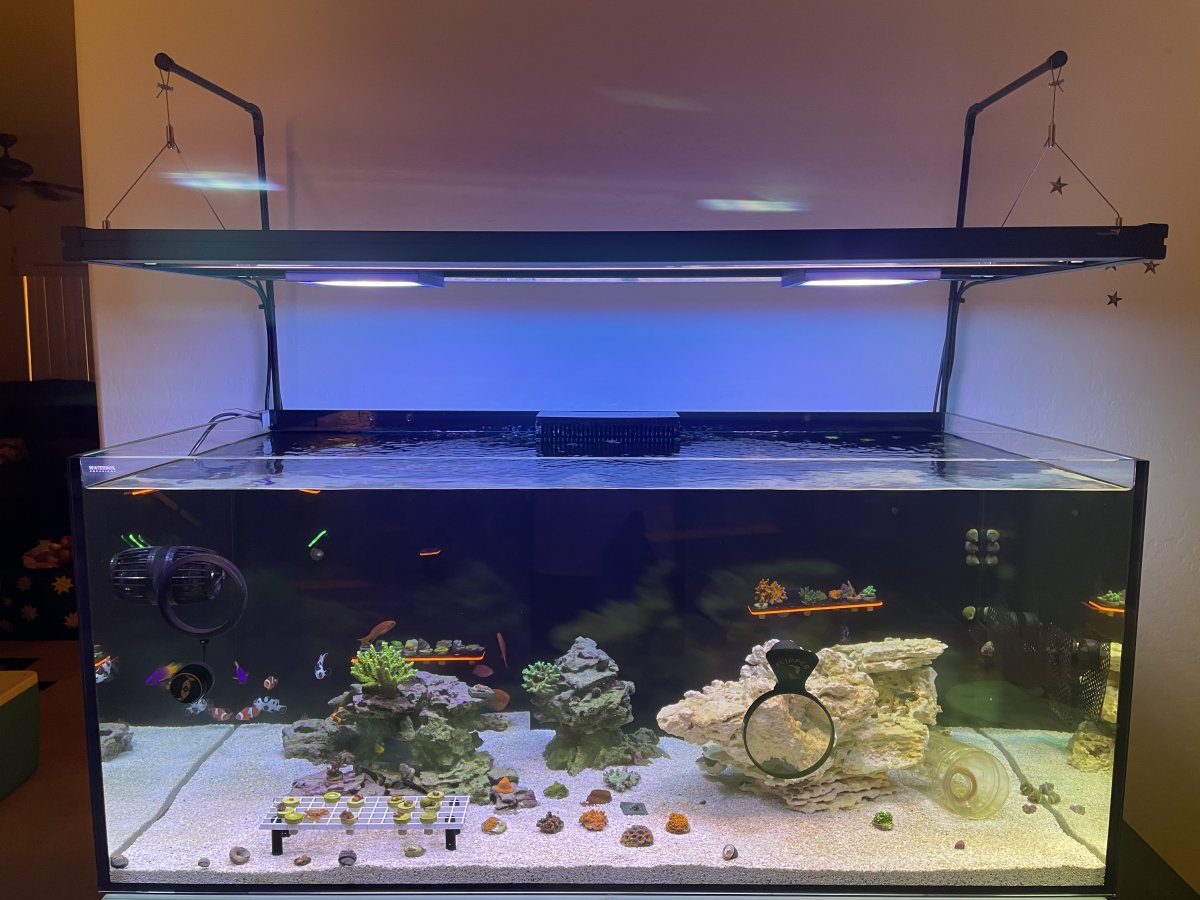 So I have to admit, life and Corona happened and I dropped the ball on my last build.

Two weeks ago I moved from my apartment into a house. During the moving process I cracked the back panel on my 40b. In desperation I reached out to the local reefer community and found a second hand Waterbox 13 for a great deal. Given the time and urgency I pulled the trigger and picked it up. Maybe not the tank I have wanted to upgrade to (Cade Reef 1500 S2) but it’s definitely still a great tank at a fraction of the price. The prior owner bought new but only had it running for 6 months until it was taken down and stored inside.

Set up was quick and easy and had some modifications to the sump already made.

This first picture has the heater inside the display and a air stone inside since I was still making enough SW to fill the tank fully. 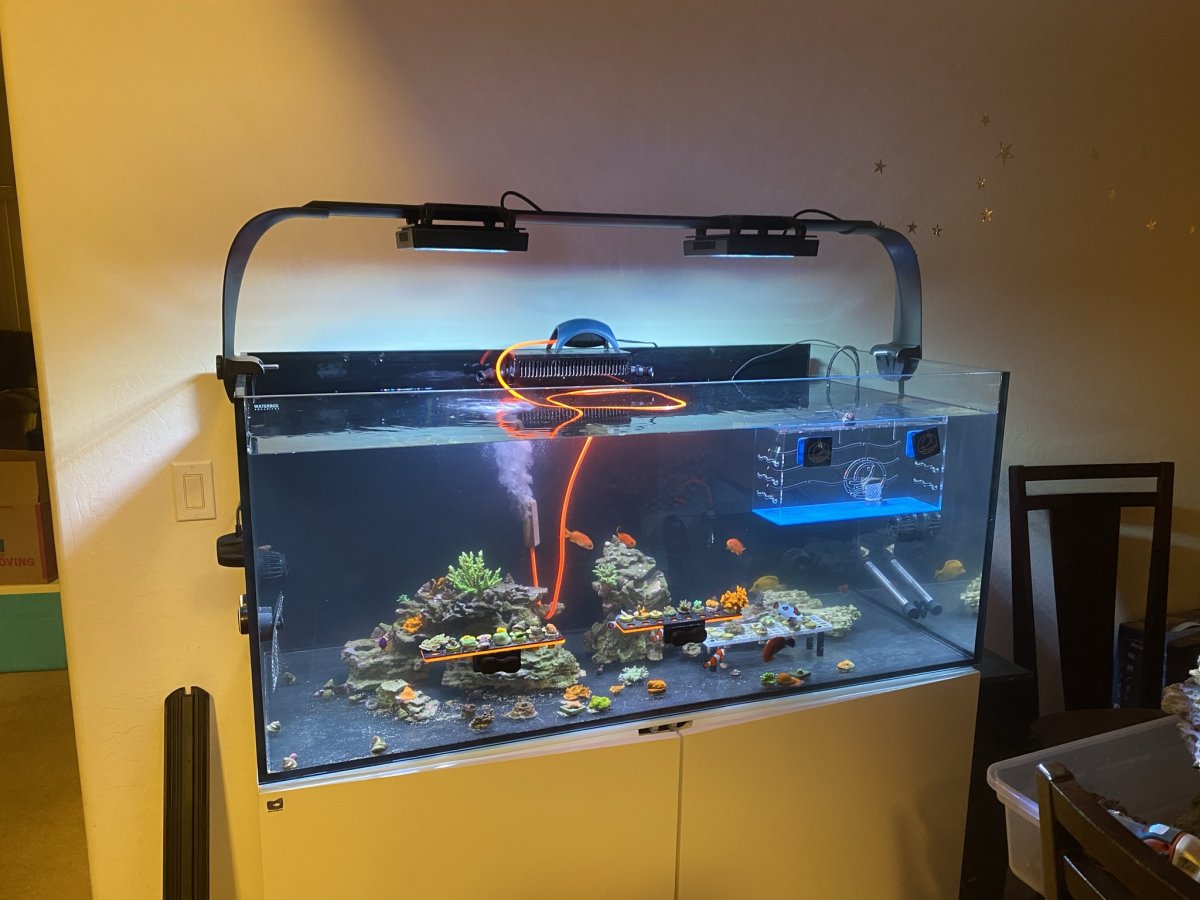 Currently still relying on the two XR15 G5 Blues while I acquire a 48” hybrid. I also need to purchase a lot more rock to fill this massive tank compared to the 40 breeder. 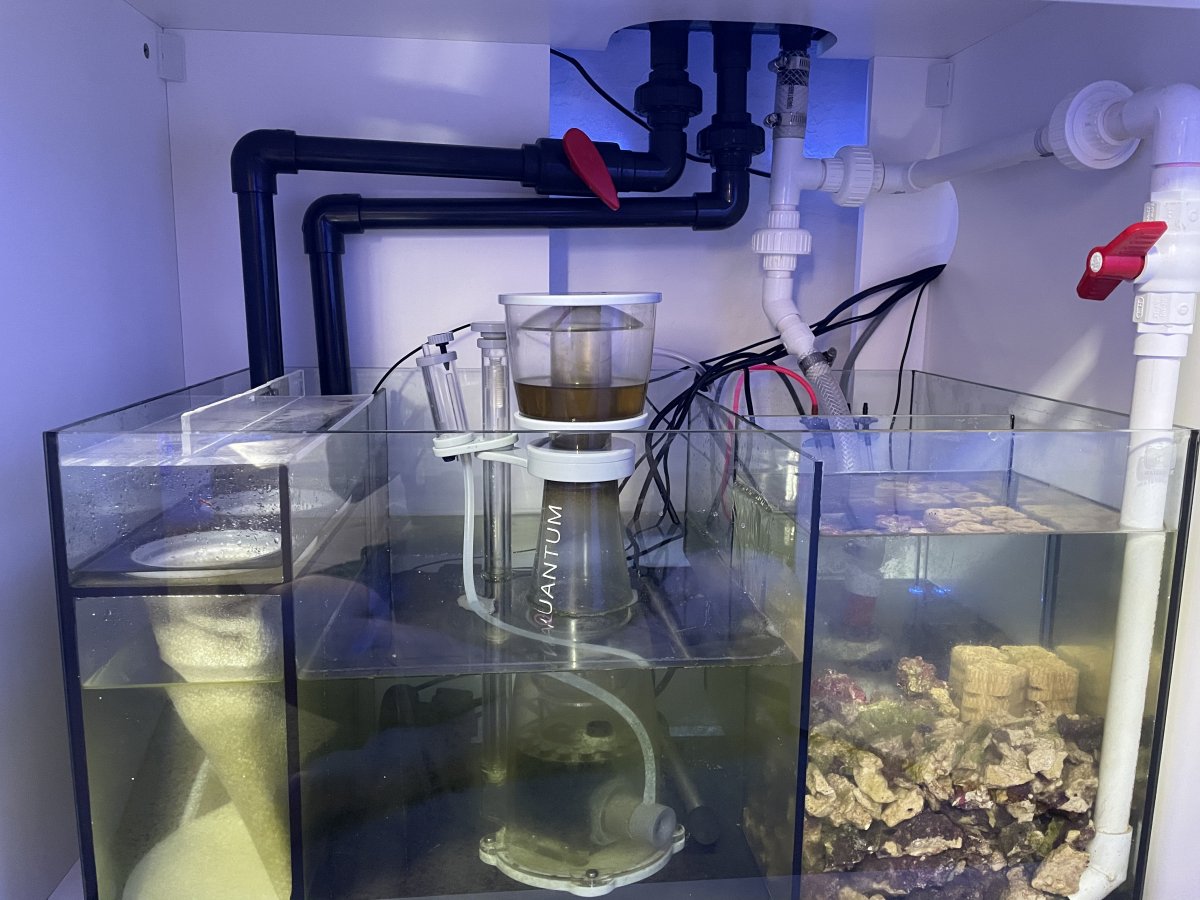 As you can see the stock ATO reservoir was customized to be a Refugium however I don’t normally run Macros and instead opted to fill with rubble and bio media since I am sticking with a bare bottom set up.

Still running the Nyos Quantum 120 and the Vectra S1 for the return. I plan on upgrading both here soon, the skimmer of choice is the Reef Octopus Elite 150-INT and Vectra M2 for the return.

Unfortunately the move did have a negative effect on some corals and lost a few SPS. As money opens up an upgrades happen I will post and update. Until then please subscribe to be notified of that build. 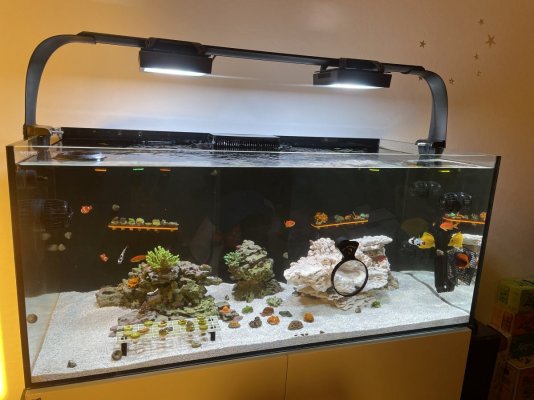 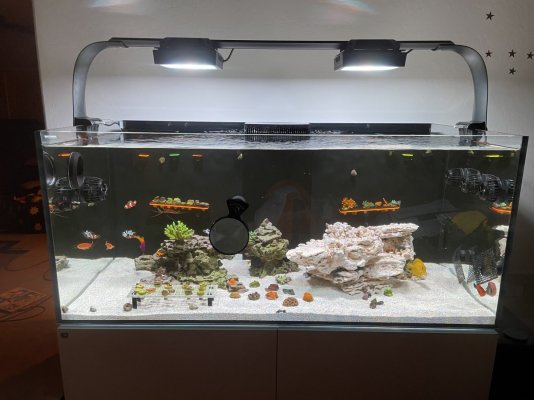 Congrats on the upgrade!!!
OP

Okay, so I have been making a couple of moves since my original post. Haven’t had much time between settling into the new place, getting everything in that I needed working, etc to post. So here’s where we are now.

I also unfortunately had some additional Coral casualties, definitely light related. I do as of yesterday have an order in for a T5 Hybrid that should be arriving on Monday.

For the hybrid I will be running 2 ATI True Actinic, 1 Blue Plus and 1 Coral Plus. I ran this combo on my lagoon before and loved the color so hoping to replicate that here.

Next I got rid of my Nyos Quantum 120, it was a great skimmer however way too small and went with a Reef Octopus Regal 150 INT. Man is this thing large. Still trying to get a handle on adjusting it but so far running it at a level 3 seems to get me great foam production. 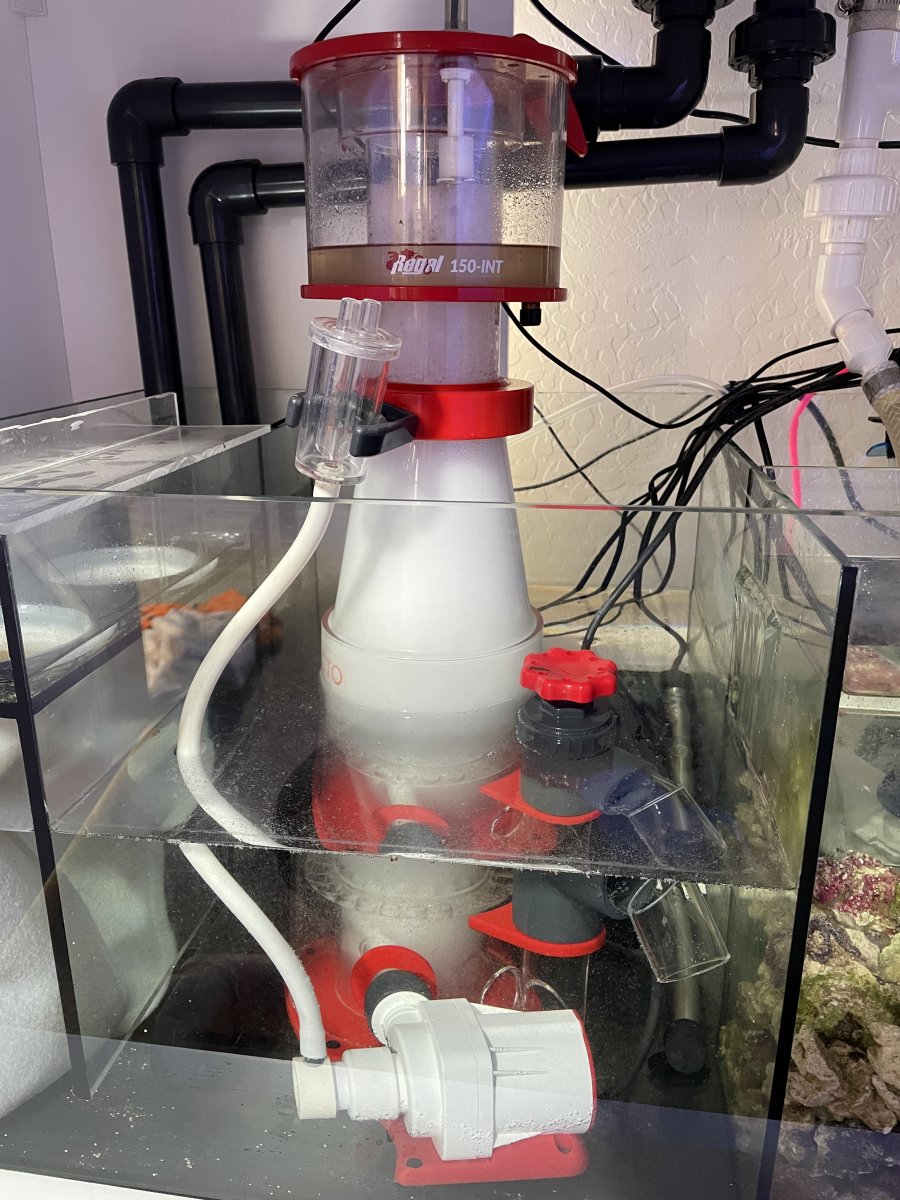 I also placed a large order of rocks and an order of 80lbs if special grade sand. 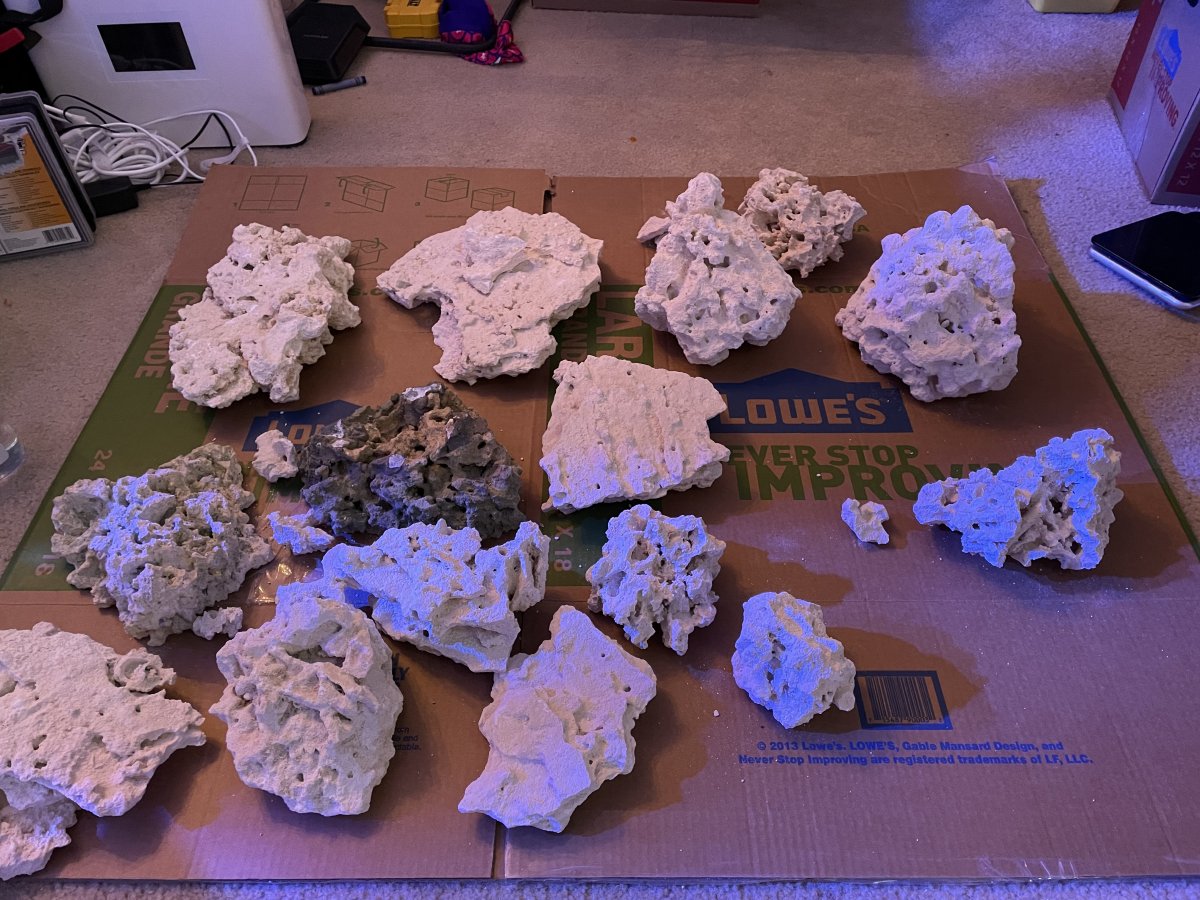 I was going to try running bare bottom Here as well but there are just way too many cool fish I want that I can Finally have that require sand in one way or another. So there’s that.

Also since I am no longer bare bottom I won’t need ridiculous amounts of flow which means I can bring some softies back, however I will be very selective of the softies I do choose.

“Finished” scape before addition of sand. 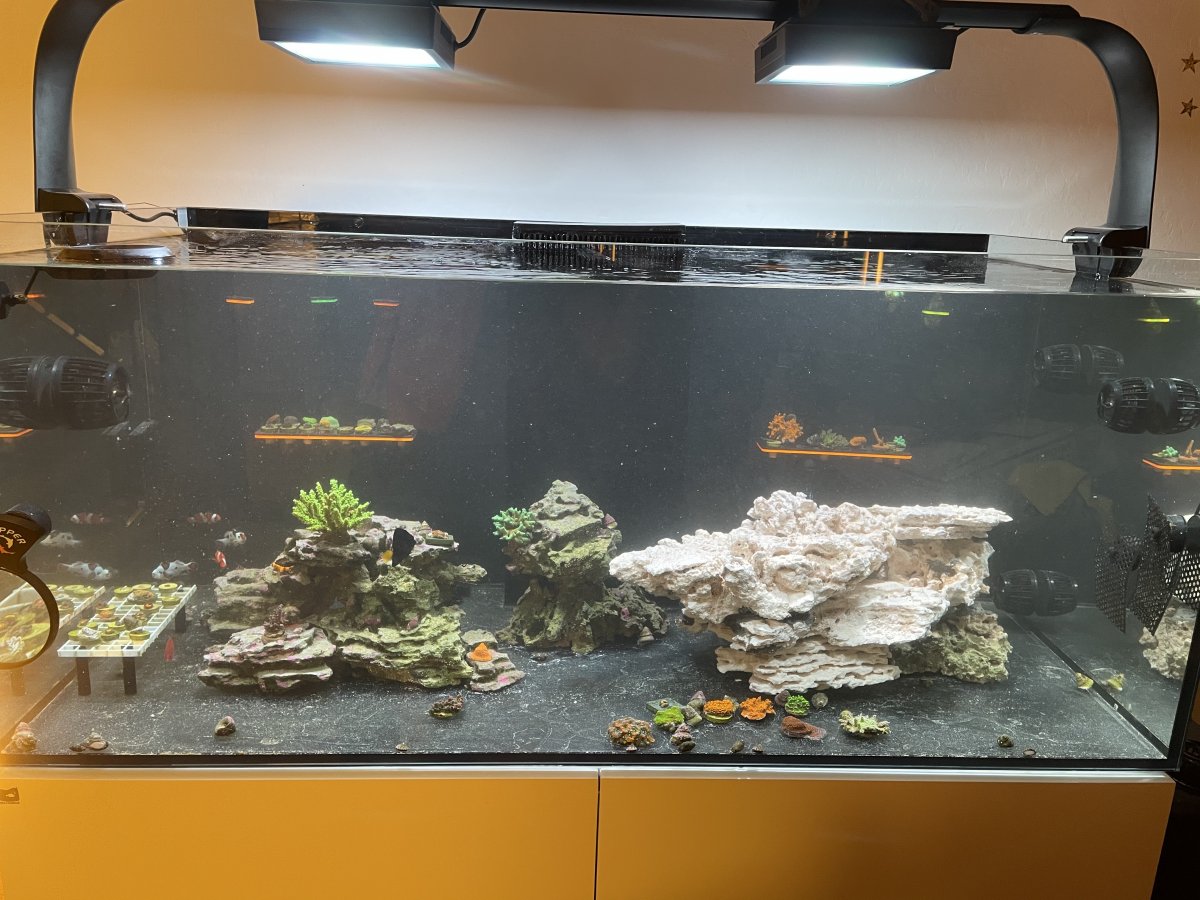 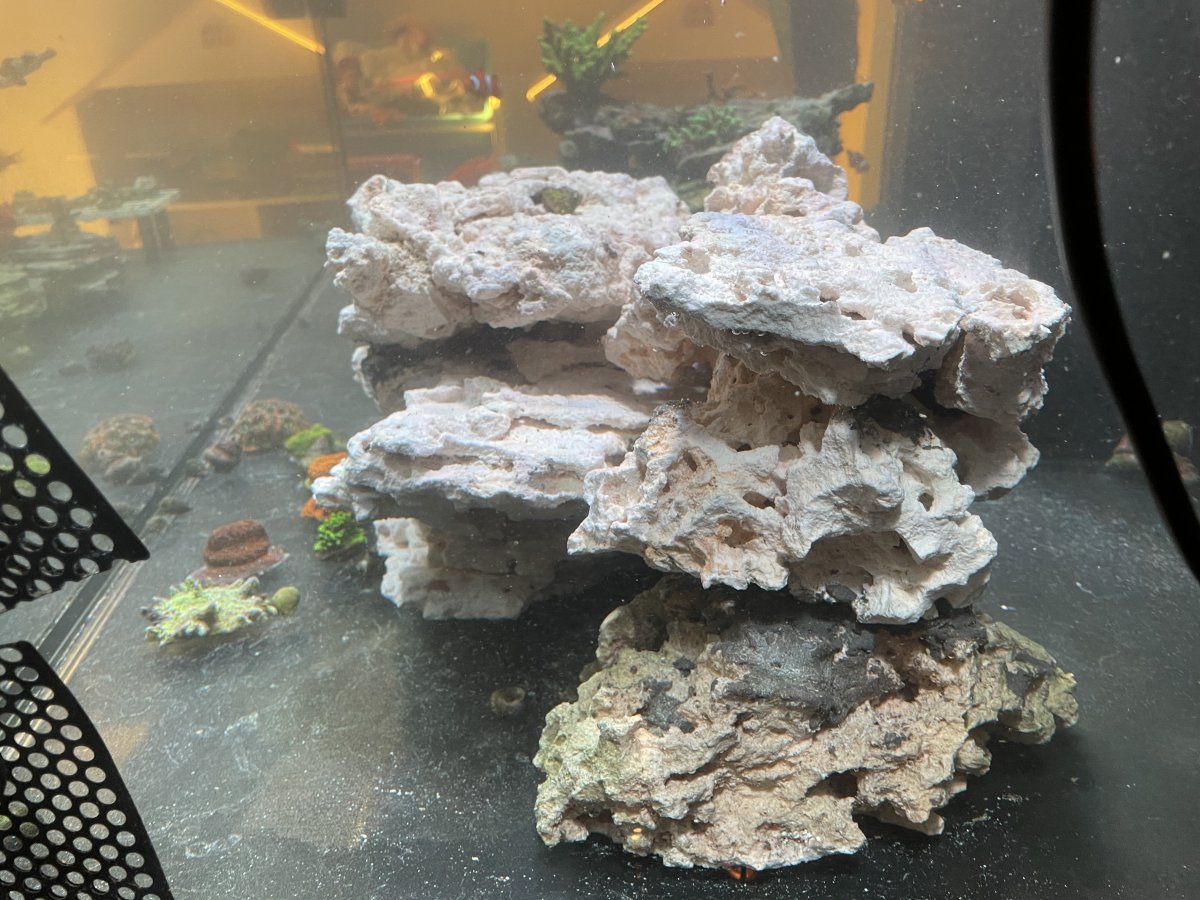 And a day later once the tank cleared up. 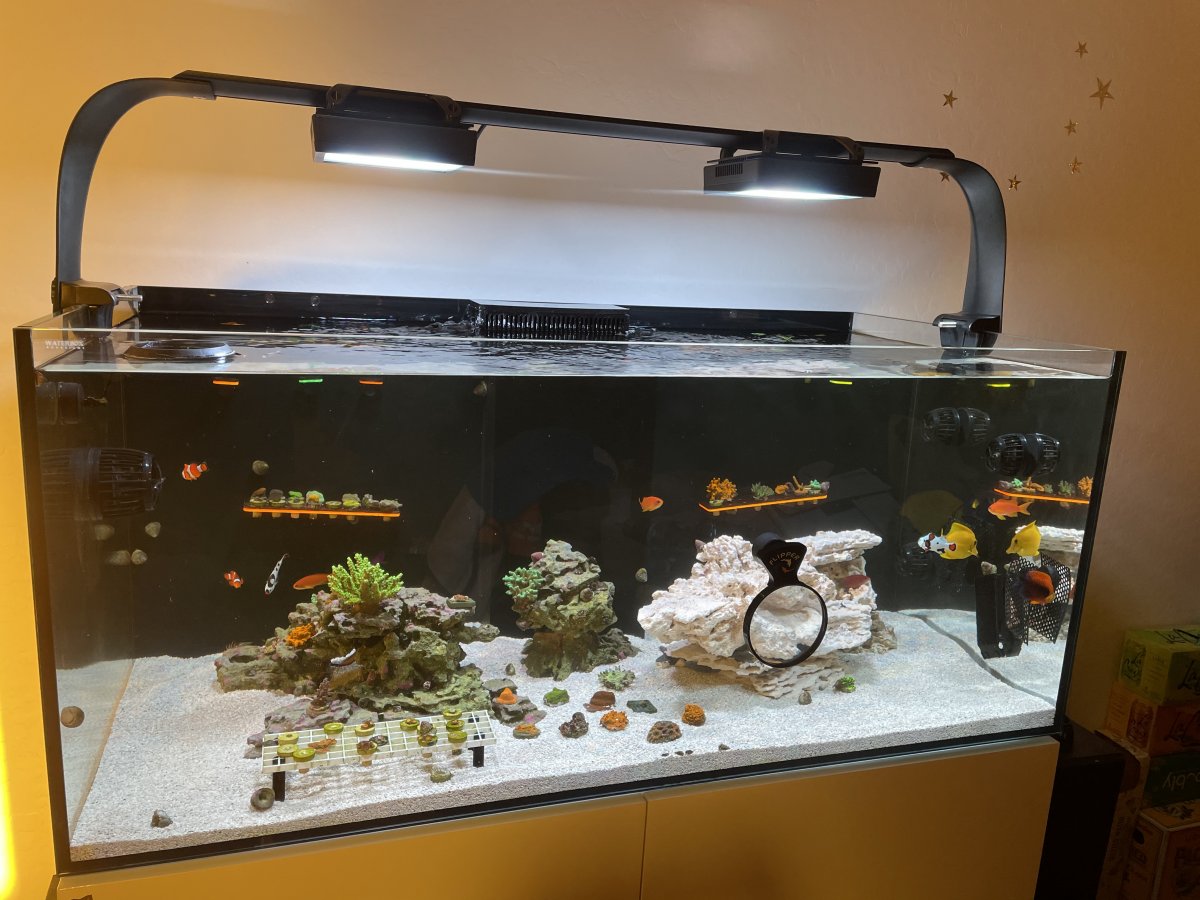 Lastly I put in a small order from Pod Your Reef for all kinds of pods to help fill in the environment with their presence which future inhabitants will appreciate. 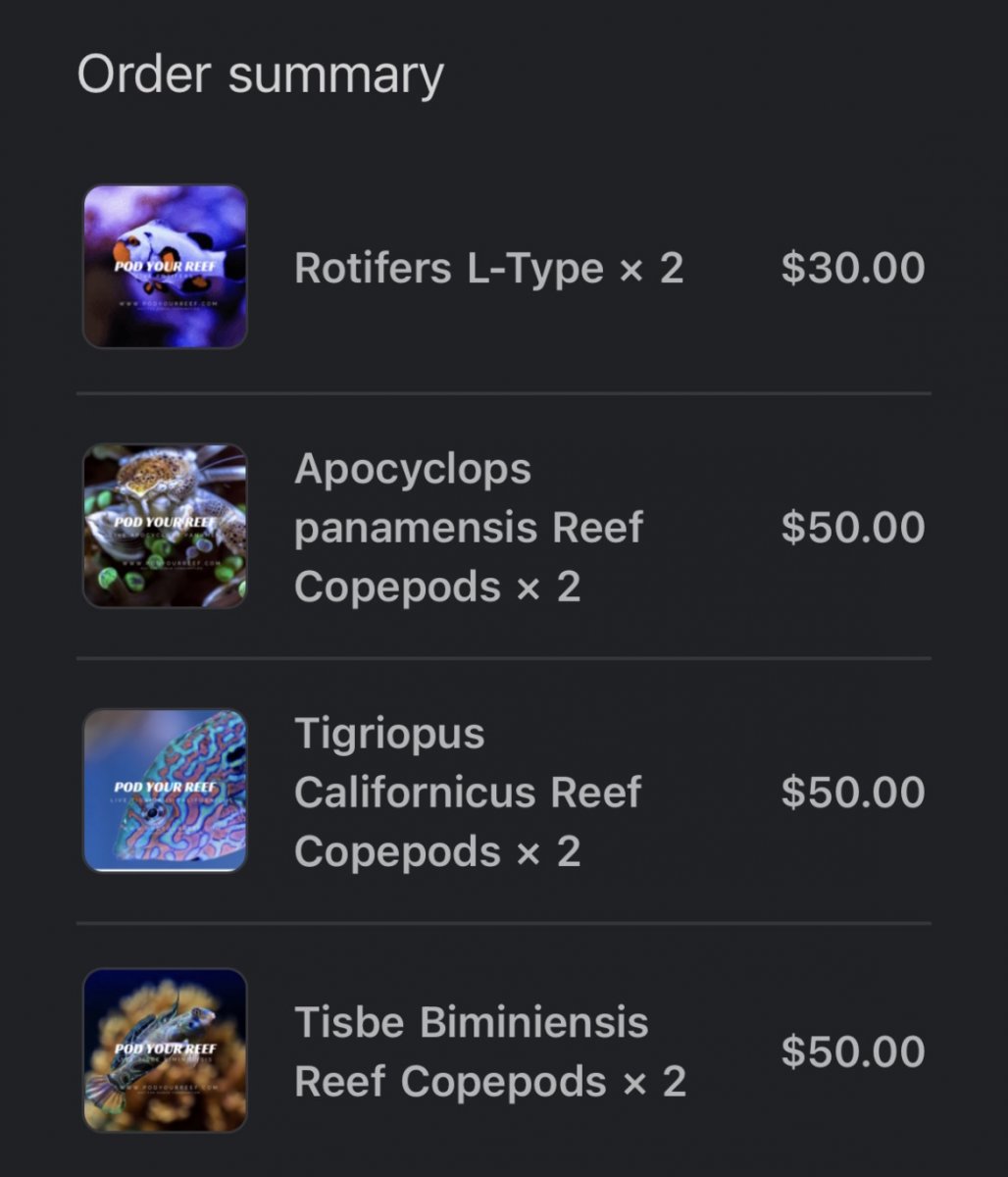 Sand and Rockscape are in. Just waiting a few days for the water to clear before posting an updated picture.

Last week I picked up my T5 Hybrid along with borrowing a Par Meter.

Before setting it up I checked the par from the 2 G5 Blues at 100% which is what I was running them at.
I was getting 75 on the sand bed and between 100/120 at the mid level. Explained why my Montis weren’t doing too well.

i don’t have any pictures of the assembly however I wasn’t too thrilled with the QC and accuracy of the premade holes as the hardly lined up with the side rails. I went with 2 Actinic, 1 Blue Plus and 1 Coral Plus. 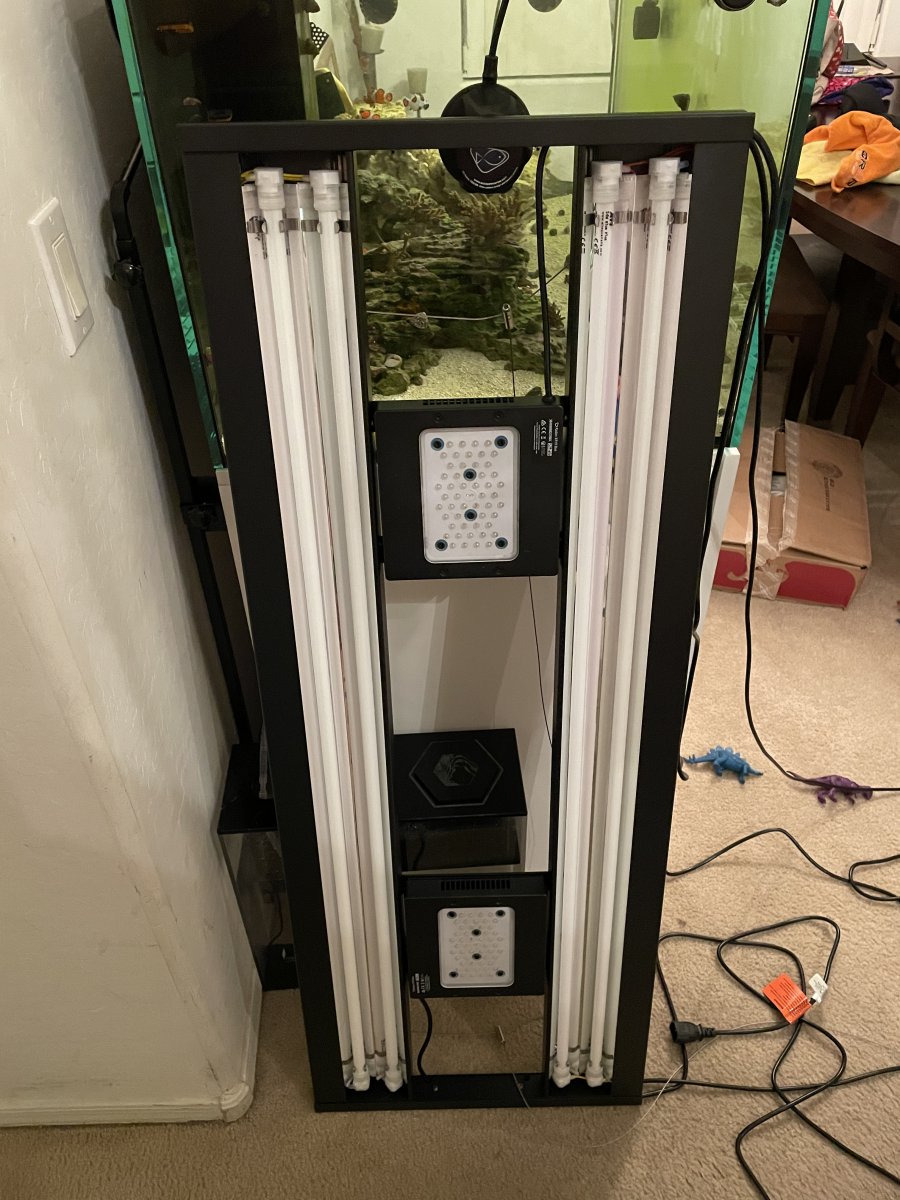 Install was pretty simple as I already had the aquatic life universal mounts on the stand. I mounted the lights 10” over the water level and spread the G5’s out to get the flattest most even spread possible. 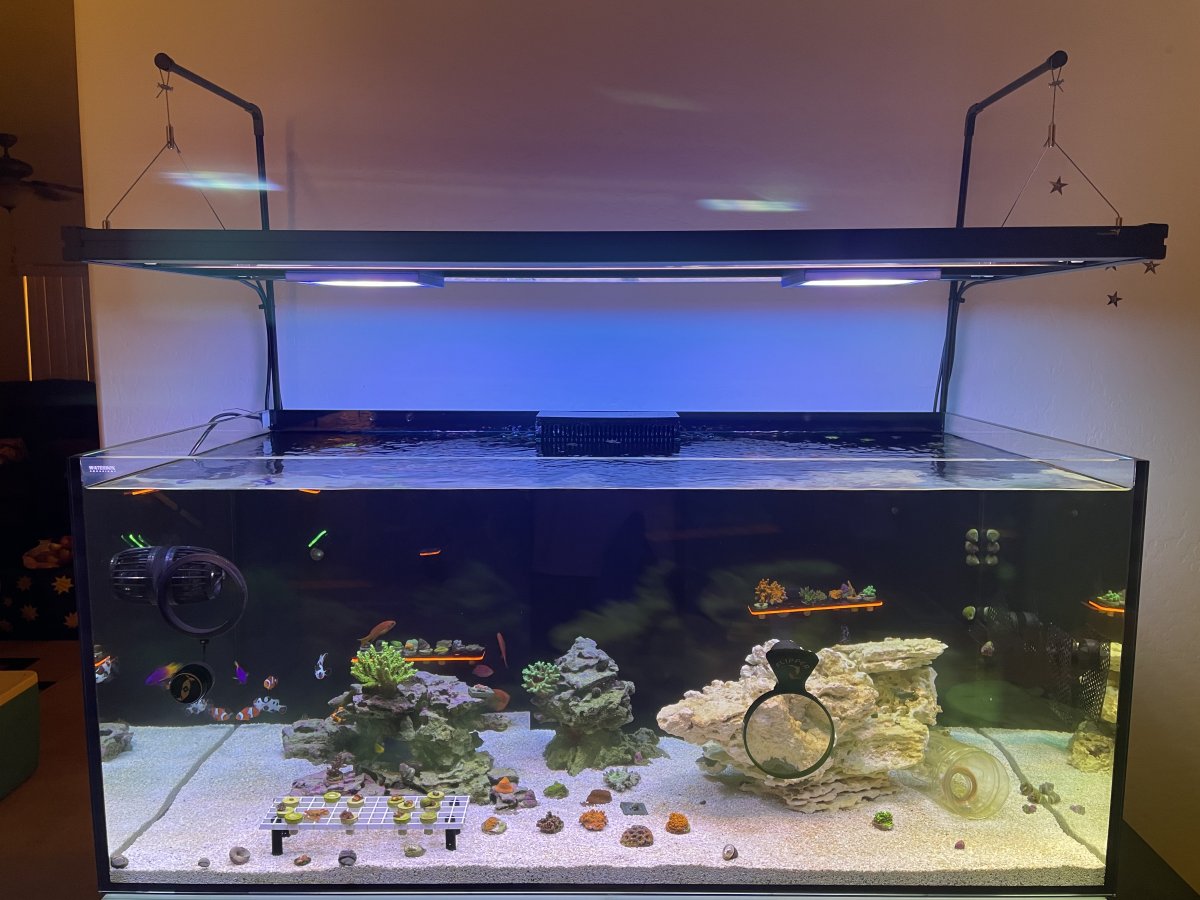 I also picked up some Berghia to deal with my aptasia problem however I needed to catch my Six Line first.

After trying a fish trap for a week with no success I was turned onto the false wall approach. Here’s a video of that.


Took all of 30 minutes before I had him trapped in there.

I’m currently running a single MP40 and going to be adding a second but check out the water movement on 90% Nutrient Transport Mode.


Lastly, here’s a picture of my F2M Holy Grail Micro just to show off. 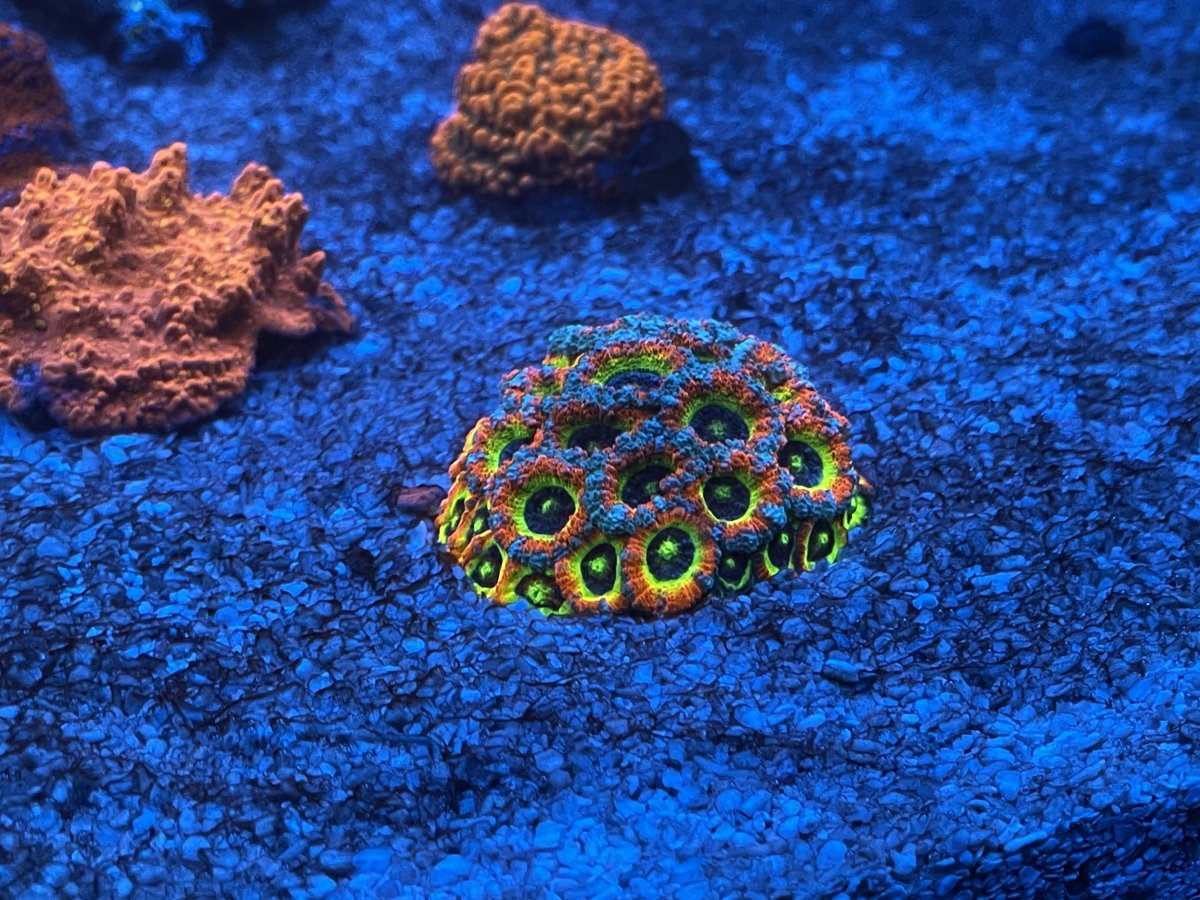 Build Thread Round two. 40b Reef.