I have a coral cat shark that has laid an egg. Not her first time but this one has a yolk inside of it, which is a first. All others were empty.

I was going to chuck it but a good friend insisted they wanted to see it. So ended up putting it in my running but empty tank just incase any rot happened wont be in my main tank. Ive assumed this whole time it wasn't a fertilized egg. How could it be fertilized? The reason I'm asking/bringing this up when looking at the egg tonight, there's an eye forming. Wouldnt that mean that the egg is fertilized? She's the only coral cat shark, unless they are they capable of being hermaphroditic? Because the only other option is my recent addition of a horned shark. I do not know the sex or age of it. I tried to take a clear zoomed in picture but this is the best I can do. Will need a second set of hands to keep egg submerged/still while zooming in. I quadruple check to make sure its a forming eye, its not an air bubble or sand

The horned shark and her were all over each other when I first got it. Always laying by one another. But it would be impossible for them to breed right? I dont think the horned shark is even breeding age with it only being 9 maybe 10 inches.

So would that mean the coral cat shark is a hermaphrodite? The egg was laid April 25.

I tried Google and found there have been findings of hermapgroditic sharks, but nothing specific about coral cat sharks. 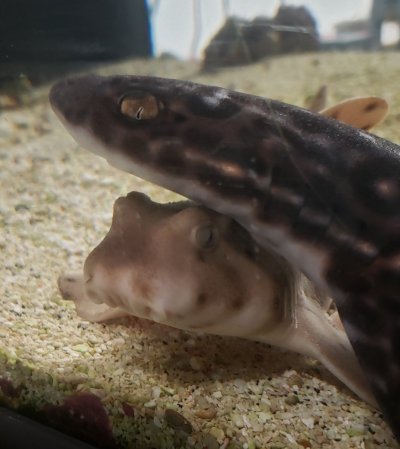 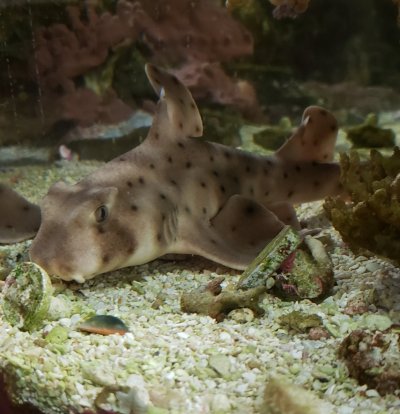 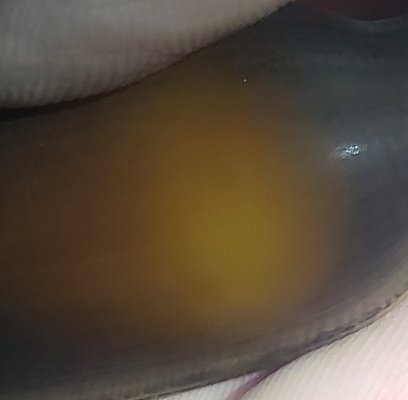 As time goes on, they are finding more and more sharks being hermaphroditic. First were bamboo sharks, then epaulettes and then even bonnetheads. I can't remember if coral cat sharks are on the list, but I wouldn't be surprised.
That said, are you sure you are seeing an eye? What I see in sharks first is a pinpoint of blood vessels, then that develops into a "wriggler". Even close to term, I don't recall ever being able to see the shark's eye until after they hatch.

Well - if I recall correctly in 2005 a group of marine biologists found a species of catsharks near India which were mostly hermaphrodites.

Also there is quite a few documented cases of Parthenogenesis among sharks in captivity. And has documented in Blacktip shark, bonnethead sharks, bamboo sharks & zebra sharks. So it could be possible in catsharks as well.

And like happens in other egg-laying species - sharks eggs which are produced through parthenogenesis can be fertile. As the young may actually be a clone or half clone of the mother.
Last edited: May 6, 2021
Upvote 0

This is fascinating ---
Upvote 0
OP

Found my magnifying glass and looked at it with brighter lights. Although it looks just like an eye its only small dot but can't tell what it is. I googled shark egg development(should of done first), and an eye forming is not how it works haha....ops.

Knowing the possibility of her being a hermaphrodite I will keep eggs eith yolk for a couple weeks just in case.
Upvote 0

Not sure hermaphrodite is quite the correct term, but several species of sharks (along with other creatures, notably lizards - including, IIRC, Komodo dragons) have been observed engaging in what's called "parthenogenic birth". Females simply give birth to what are essentially clones, and from everything I've read, are always (unsurprisingly) female.

Good luck with your egg!!

Keep us updated!
This is very interesting!
It’s not impossible for parthenogenesis to occur here, though very rare.
I’d just candle the egg every day and see what changes occur.
Upvote 0

Some species can store sperm for long periods of time. I seen this online in relation to chain cats. "the shark has been known to store sperm up to 843 days although, there are some circumstances of poor egg development in eggs laid later."
Upvote 0

N.Sreefer said:
Some species can store sperm for long periods of time. I seen this online in relation to chain cats. "the shark has been known to store sperm up to 843 days although, there are some circumstances of poor egg development in eggs laid later."
Click to expand...

Was going to mention the same thing. They can store it for a long time. Something something dumpster.
Upvote 0

J
What type of banded shark is this