So, I figured I’d finally make a build thread (gotta win that contest, you know). This is my 28g JBJ Nanocube. It’s pretty much stock in terms of the lighting and return pumps, but I’ve added an Aquamaxx NF-1 skimmer, a Jebao SLW-20, and a tiny little 50gph off brand power head behind the rockwork to help stop detritus from settling back there.

It’s been a really weird cycle/start to the tank, I’ve had a massive issue with nitrates and basically zero phosphates, which I attribute to starting with mostly dry rock. I’ve started probably 20 tanks in my life, and never had one like this. I’ve added probably 25% live rock, and have been carbon dosing for around 2 months now, and finally I’m starting to see the nitrates come down. For a while everything was covered in GHA and cyano, but since I started carbon dosing it’s slowly but surely been going away, most of the cyano is gone and the GHA is maybe 1/3 what it was. Anyway, on the right track now.

Aside from the nitrates, all my other params have been easy to maintain in this tank. I currently dose 2 part daily, along with vinegar, and then weekly I add some amino acids (reef plus).

My stocking has changed a little bit, I had 2 clowns, a firefish, and an orchid dottyback. And the. I got a six line wrasse (one of my favorite fish, sue me). Well, the wrasse started chasing the dottyback, who then started chasing the firefish, so I took the firefish and dottyback back to the lfs. Then a few weeks later, the clowns started fighting with each other, and since I’m not a big clownfish person (my gf wanted them), I took both of them back too. So, the wrasse was alone for a while and then a couple weeks ago I got a Banggai Cardinal, so currently just the two fish.

As far as inverts, I’ve got a coral banded shrimp who is just the worst, I kind of hate her, but she’s staying as of now. Also have a tiger conch, who does a great job of keeping the sand clean. And then a variety of snails and 5-6 hermits.

As far as corals go, most of them are just frags. I’ve got several kinds of mushrooms (my Rhodactis indosinensis have just exploded, went from 2 to 6 or 7 in a month, several kinds of zoas, a hammer, a Duncan, a chalice, a lobo, some cloves, a few leathers, a turbinaria, a favites, a montipora, an acan, Xenia, gsp, a maxi mini carpet nem, a rainbow BTA (in the back currently can’t see in picture), a sad Caulastaea, and I’m sure I’m forgetting something(s). Everything has been doing well and surviving the nitrates, so knock on wood.

Oh, and I have a few types of macro algae in there as well.

I think that’s it, the tank just turned 6 months old, hoping that by month 8 all the algae will be gone and it won’t look so sad. 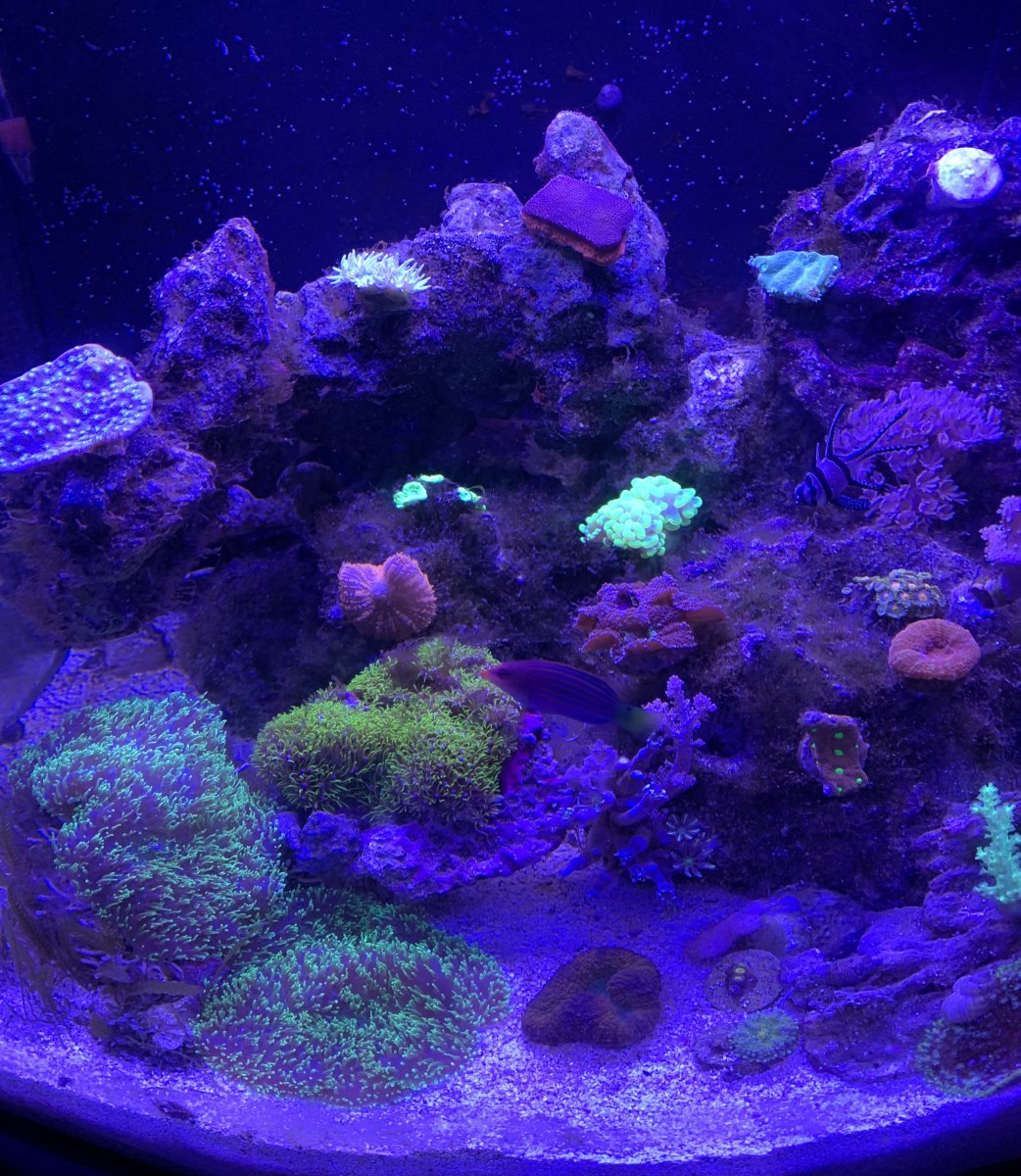 Nice looking tank. Looks like you are on the right track.
OP

The Lumpster said:
Nice looking tank. Looks like you are on the right track.
Click to expand...

The love hate relationship with reef shrimp is really lol.

Updating for the giveaway, nothing has been added or changed.

One thing I didn’t mention is what kind of filter media I’m running. I’m currently running a little bit of carbon and some Purigen. I was running Chemipure Elite but took it out because my phosphates were bottoming out. I’m also stuffing filter floss (that I change every other day) into one of the back chambers for some more mechanical filtration. I’m working on building a more elegant solution to this, but for now just stuffing a wad of floss into one of the chambers.

Added a Rock Flower Anemone and a big green toadstool (Sarcophyton). Will post a pick of the toadstool as soon as it’s polyps are out, but here’s the rock flower:

Update for Giveaway:
Here’s the toadstool I got the other day, it’s still retracted (though less since taking this photo).

Added a little bubble coral this week (got a pretty unreal deal on it at Petco of all places). It’s surprisingly healthy looking, fully inflated itself an hour after putting it in the tank.

Also included a pics of the RBTA I added a few weeks ago (the place it’s chosen to stay isn’t the best, but it’s not close to any other corals or anemones, so it’s okay), a fairly new Lobophyllia, and a little Favites frag that was looking kind of rough for a few weeks but has bounced back and is growing. 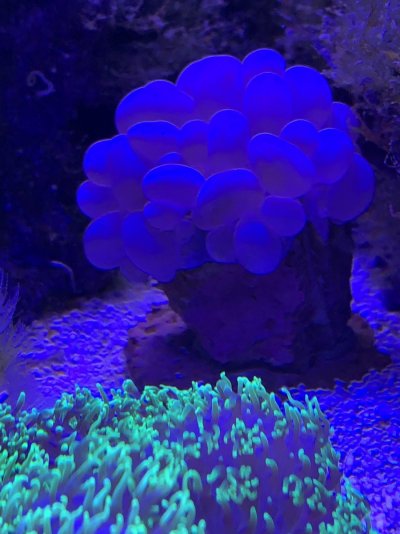 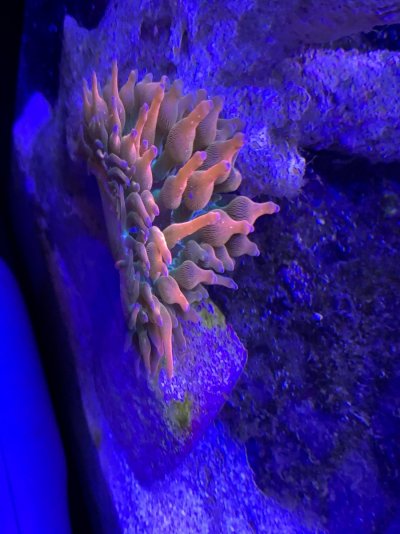 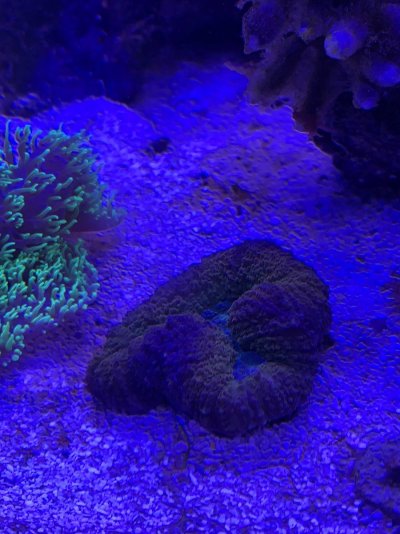 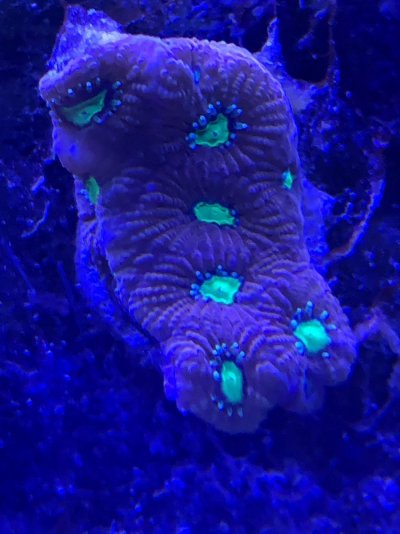 Nothing major, but did notice a whole bunch of babies this morning. 2 new Duncan heads, two new hammer heads, a baby Yuma, three new zoanthids, and one of my Rhodactis indosinensis split last night. It’s kind of crazy how much stuff can grow in a few days.

Edit: and my Favites is finally taking off, starting to encrust.

MaxTremors said:
Nothing major, but did notice a whole bunch of babies this morning. 2 new Duncan heads, two new hammer heads, a baby Yuma, three new zoanthids, and one of my Rhodactis indosinensis split last night. It’s kind of crazy how much stuff can grow in a few days.

Edit: and my Favites is finally taking off, starting to encrust.
Click to expand...

That's epic! None of my mushrooms have split yet, but I guess it just takes time.
OP

Few new additions today:
A couple Micromussa lords (the bigger one I got a great deal on), a little galaxea, and a pinkbar goby (haven’t been able to get a good pic of it yet). Had to do a little rearranging, my green Rhodactis have been growing and splitting like crazy, gonna have to get rid of some soon. Anyway, here are some pics. 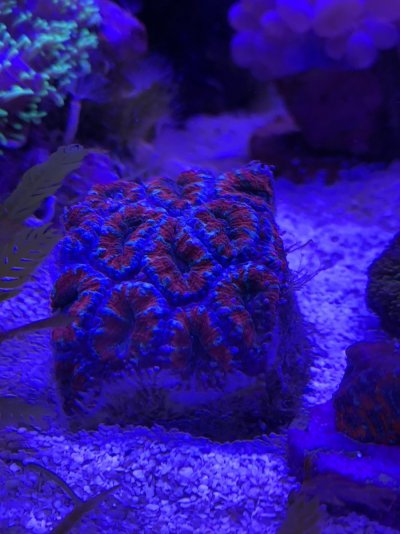 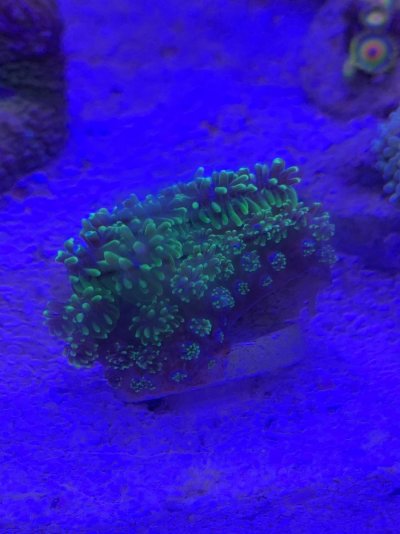 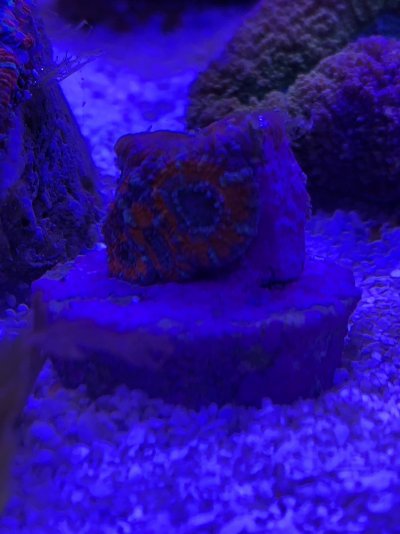 My newish green toadstool is finally settling in and looking happy. No tentacles out for almost two weeks and then this morning they were all out.

Took a new full tank shot under whiter lights. So you can see the depravity going on here. It isn’t GHA, it’s Derbesia, going to hopefully knock it out with some fluconazole next week (fingers crossed it doesn’t kill everything). Anyway, be prepared to throw up in your mouth a little bit.

edit: also added a pink bar goby a week or two ago, she likes to live dangerously underneath the RBTA, was finally able to get a decent pic of her. 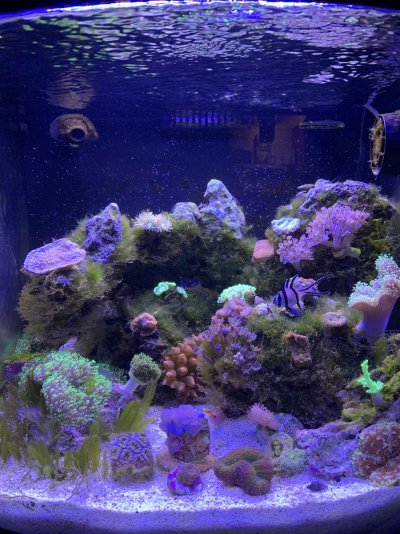 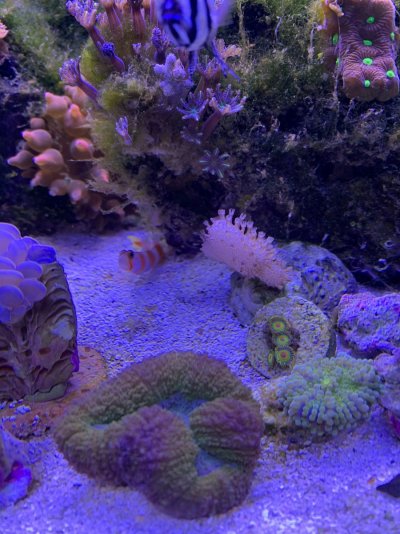 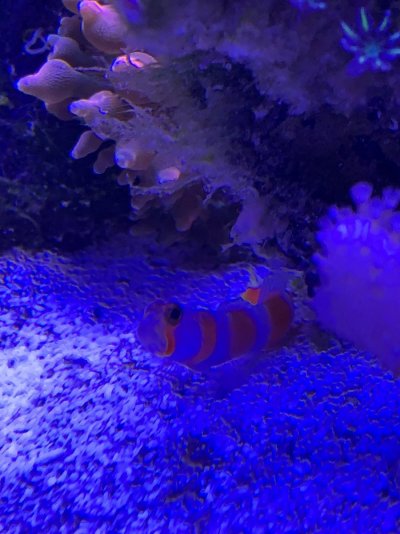 Your nem is looking good! What is it?
OP

James_O said:
Your nem is looking good! What is it?
Click to expand...

It’s a rainbow (it’s mouth is green and gold and then it’s got some white specks/streaks). Got a ridiculous deal on it from a local reefer. It’s moved around a little bit, but I think it’s finally settled. The pink bar’s hideout is right under it, and every time she goes in or out of her lair, the nem thinks it’s being attacked and sucks in really fast (like fraction of a second) and then comes back out a minute later (then the pink bar upsets it again), but it’s staying there so it must not be too bothered.

Awesome! Wish I had some local reefers that gave me good deals on coral. :/
OP

James_O said:
Awesome! Wish I had some local reefers that gave me good deals on coral. :/
Click to expand...