Picked up some smooth skins and a few others from Sunnyside corals. I had never heard about them, but was looking for some interesting forms and they had what I was looking for. Pretty big frags, most encrusted over the plug by a long shot. Sorry for the terrible picture, I thought it turned out better on my phone, but apparently not. Colors are a little washed out, if you know the reference pieces, you can make your own assumptions; i.e. the Pacman is bright fluorescent green polyp with pink corralite, and the myagi tort is your typical purple/blue and green base. My point was just to show some forms and the actual pieces received which I'm pleased with. I would say their pictures are fairly accurate comparing their photos on their site to ones I have. I have a hard time with the BC "sky doppel" smooth skin forms, so who knows if I'll ever be able to produce the colors expected with these smooth skins. Things browned out a bit, as it was 99*F here, and I assume as much in the summer; but everything was well packed in jello cup protected frag plug and temps were fine in the bags.

Back Row (for reference, all mine):
2-3" mini-colony of Tyree Pinky the bear (actual color is like strawberry shortcake)
Red planet nub
Pacman 2" mini-colony
PC Rainbow? Looks more like vivid confetti, but it's ~month old in my tank
myagi tort
myagi tort
BC unknown
I forget... 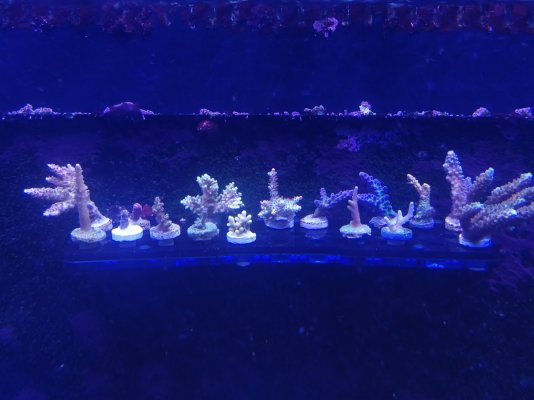