This morning while viewing 120G display, I noted a discoloration line on Orange Tree Sponge branch, so I blasted it with numerous jets from Turkey baster to see a Micro Starfish drift down to the substrate. For the last five days, I have added 100ml of 3% hydrogen peroxide to display tank. On each occasion, return pump was off which lowered level of display tank, for simplicity sake I estimated display tank water volume at 100G and ignored displacement of rock. In effect, concentration dosage will be slightly higher as I used 100ml of 3% peroxide into 120G tank. I waited till lights out for a few hours, then removed flow from algae refugium and diy algae reactor. Peroxide added to display tank in one dose in high flow area. After four hours, refugium and algae filter were brought back on line.

Let’s put this in perspective with a time line referenced to loss of power on Monday, Feb 15 during winter blizzard in Texas. Fortunately, when power went out for two hours, it was daylight. I had already purchased inexpensive battery operated air pumps and they were still in Amazon box. Within 5 minutes, I had both display tanks with air bubbles.

I have used this as a reset on this tank, because of neglect of TLC on my part. So, this is day five of 3% peroxide treatment of 1ml per gallon in display tank. At day two, during lights out after 4 hours of treatment, I added fresh clam juice and saw an instant increase of spaghetti worms across substrate. After 5 days I can saw that Orange Tree Sponge is in great shape as are the micro starfish grazing on sponge. Flower anemone, RBTA, Gorgonion, bristle worms & pods are all good.

At this time, the Green Leather is the only apparent distressed organism, besides GHA, green cyno on rocks and red cyno on gravel. I will recheck spaghetti worms after treatment today. 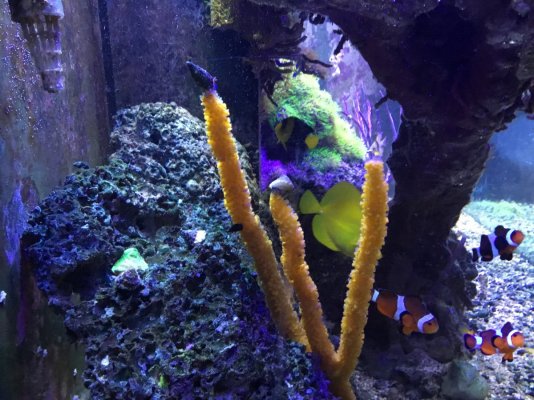 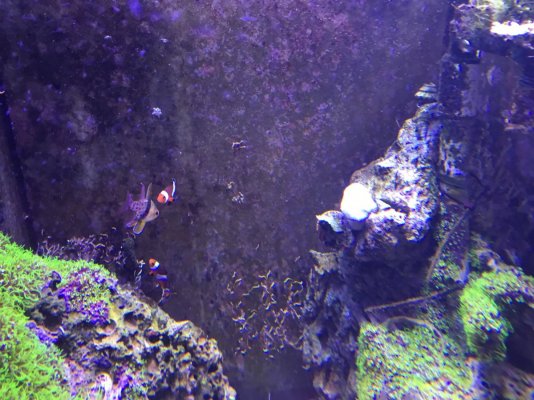 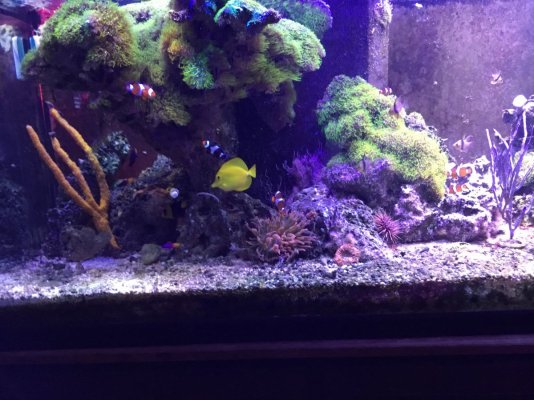 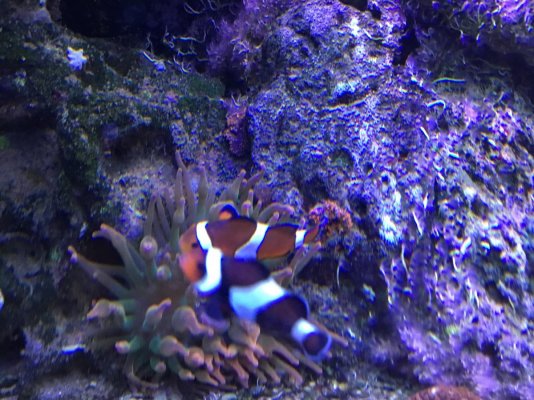 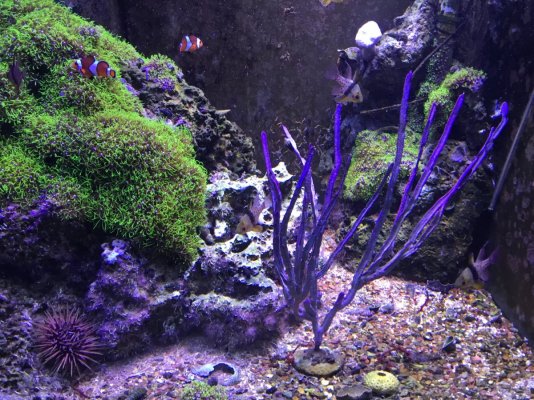 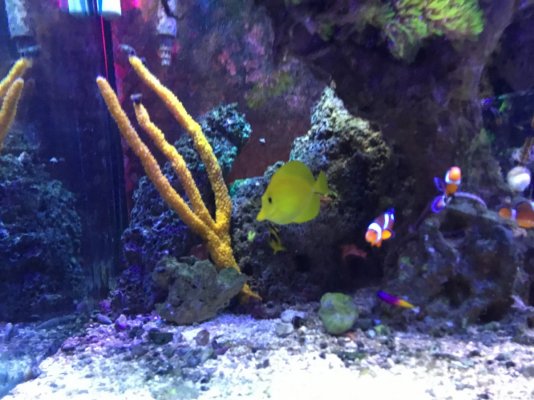 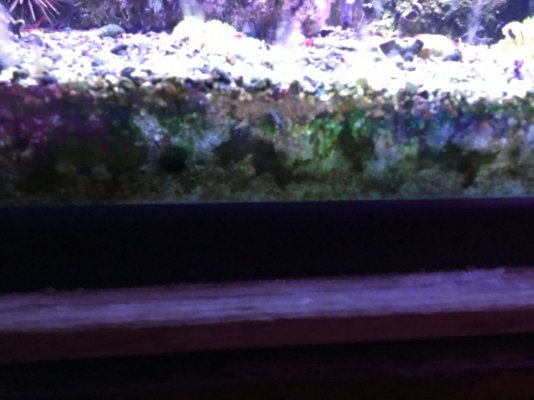 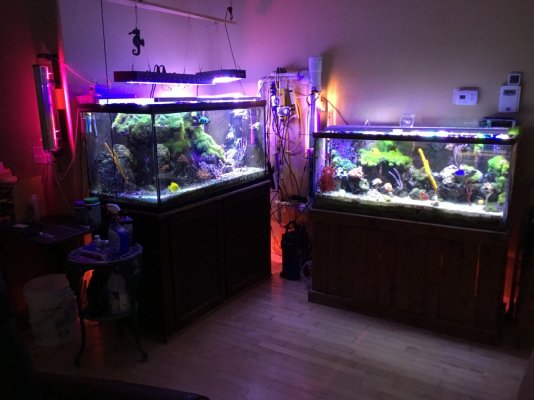 @brandon429
It wasn’t to boost oxygen, I had that covered with the air pumps. I have used peroxide for in tank spot treatment and as a soak for 10 minutes with 10% solutoon of 3% hydrogen peroxide for many years . Thank you @Timfish

Both @Lasse & I have municipal waste water treatment experience with microbes. Lasse’s experience is much more extensive. When he endorsed the treatment level of 1ml/G as safe for bacteria, I knew I could evaluate detrivore response to peroxide, so I jumped in with both feet.

Lassie,
when you discribed the way the Oxydator works, I saw that the amount of enzyme was what controlled the rate of feed. With respect to the oxygen free radicals, is peroxide dosing similar to Oxydator?
Last edited: Monday at 8:13 AM
OP
S

considering your organizational abilities and skills of persuasion, let’s find some financial support to get a bacteria population study done on a target tank using peroxide dosing. I think @Paul B had this done on his tank. I am not familiar with scope of test or cost. Let’s spread the cost out among the interested hobby community. You can be the community organizer.

@Lasse
Are you familiar with bacteria population test on reef aquariums?
Would an oxygen meter assist with using peroxide treatment in reef tanks?
Last edited: Monday at 8:14 AM
OP
S

Having marine tanks for fifty years before internet & books we observed thru second hand result what the bugs were doing. A microbiologist reefer friend coined the term “microbial overlords“ for our reef tanks and it has always been my first priority. As we learn more about microbes, we have also learned more about the exudates from coral & macro. These waste feed bacteria which feed corals and numerous other filter feeders of which sponges are of special interest as sponges feed on bacteria & DOC. As with anything, it’s
”A Question of Balance”, A coral reef in the wild would be algae dominated if it were not for herbivores. The classic example was loss of urchins due to virus with some Caribbean reefs becoming algae dominate which smothered the coral. To further dissect this happening it was shown that certain bacteria populations shifted from producing proteins & lipids to producing carbohydrate. All of these different DOC are required for biomass building, however, in the wrong ratios you will poison your coral.

Picture #1 shows new translucent growth tips on Orange Tree Sponge with five consecutive peroxide doses every 24 hours. In the background on a large rock are yellow sponge & orange bryozoan. All is good.

As I looked at the above picture, I realized I had what looked like minute Cynobacteria spots on orange tree sponge, which has been in tank for three months, with no such occurrence on him for that time.

Through deduction, I will assume that DOC will increase across the board because things are being killed but not completely oxidized, thus gunk buildup in water. Activated carbon, GAC, is the best all around media for DOC.

So while increasing GAC media in my HOB, I removed rock rubble to make room for GAC. Several micro starfish were transferred to a temporary newly set up 30G macro lagoon. So micro starfish can handle 1ml/G of peroxide. I suspect amphipods & copepods have suffered as none came of rock rubble from HOB. 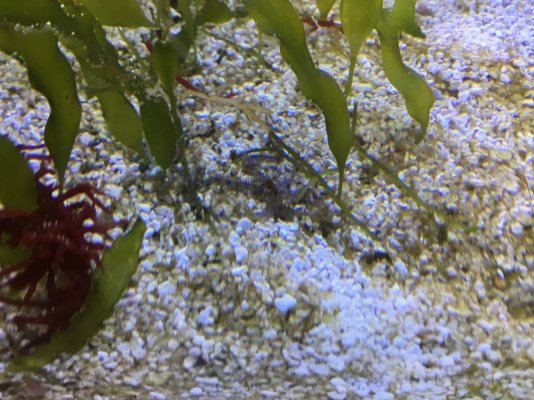 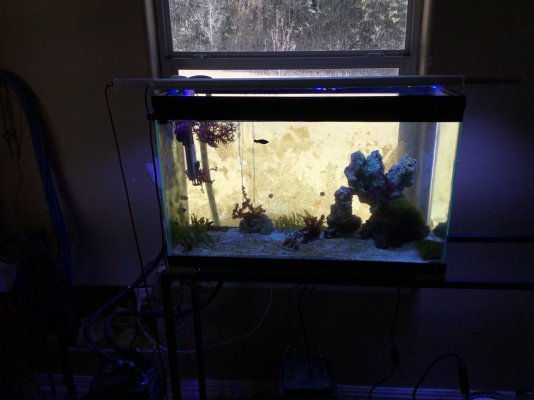 To answer the question about macro response to peroxide, I would have said from previous attempts to clean GHA from Bortacladia, “not good for macro”. As I continue to learn more about the complexities of the “Coral Holobiont” I marvel at the Intelligent Design of how things work. so after six days of peroxide, this macro is 2” under water with a 300W led black box 8” above the water.

Marine Plants in the Aquarium

It’s conclusive. Peroxide treatment at 1ml per gallon of 3% peroxide has destroyed the amphipod & Copepod populations in my 120G display.

Both refugium and algae reactor were off line during peroxide treatment and both are full of pods.
OP
S

I will remove green leather from 120G peroxide treatment tank and put it next to sea Apple in 75G tank. 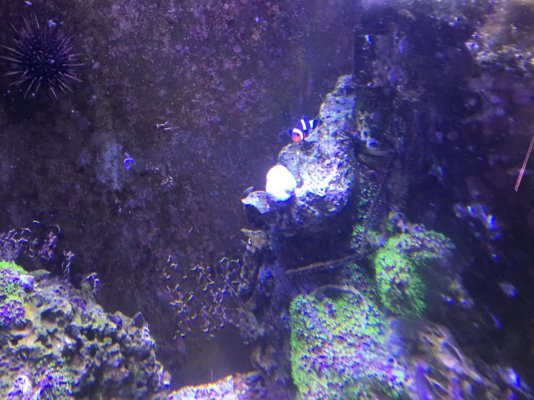 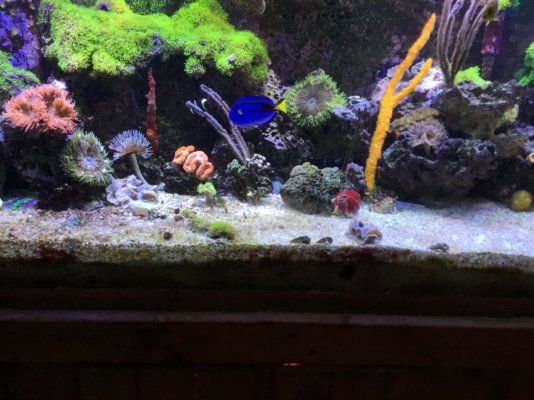 I am circulating water between 120G & 75G tanks. In the past, I used this as a convenient method to eliminate shock when transferring livestock between tanks.

Todays main purpose is to introduce healthy biodiversity of micro fauna & fana in the water column from 25 yr mature 75G tank Into peroxide treated tank. I will discontinue peroxide treatment for one week and evaluate status. 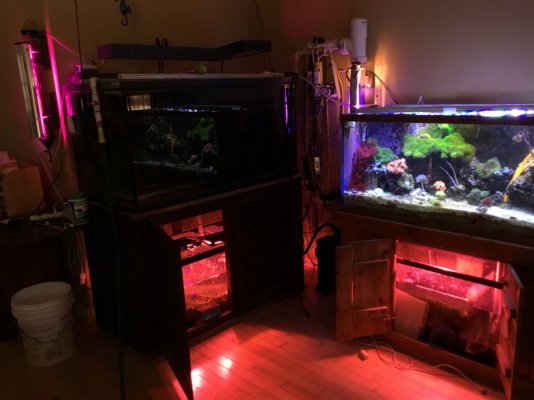 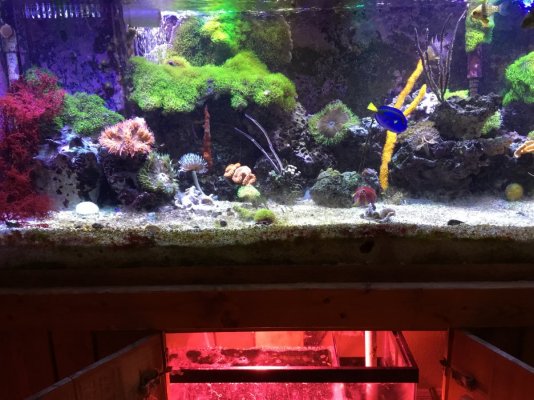 one mil per gallon wow that is setting observable boundaries Subsea it really is. we usually use a tenth of that, Cory has tested within your ranges as well but that's a rare threshold for 100% certain. having those well-aged tanks with cushioning organics likely helped stave off more loss
OP
S

brandon429 said:
one mil per gallon wow that is setting observable boundaries Subsea it really is. we usually use a tenth of that, Cory has tested within your ranges as well but that's a rare threshold for 100% certain. having those well-aged tanks with cushioning organics likely helped stave off more loss
Click to expand...

My 120G display tank is 3 years young. Due to various reasons, I neglected my systems for almost a year. Now, we are paying dues. I have no problem with temporary loss of pod populations. Both of my algae filters feed pods to display tank. I can transfer canister filters ard bring pods in from other systems. At this time, I am decreasing algae dominance in 120G display tank with peroxide. There is plenty of diversity in spaghetti worms, tube worms and bristle worms after 7 days. Orange Tree Sponge & Bryozones on live rock are good. I even found a delicate Wine Glass macro in display tank within 8” of 300W black box led. Even micro starfish were not damaged.

Two days after ending 7 day peroxide treatment of 1ml/G , I can say rocks & substrate are much cleaner.
Also, an unusually large number of snails are laying eggs on glass.

Subsea that’s really neat it is, I hadn’t heard of links to spawning before they might just be super comfortable in the large balanced well fed system

Because I am all about the “little people” that do the work, I have started 14 day MicroBacter7 treatment.

I incorrectly assumed I was getting diversity of bacteria because of the number 7. Apparently, the 7 refers to benefits of, as a marketing tool. If I was dosing bacteria, why would it be necessary to continue dosing bacteria. I would expect that bacteria dosed would multiply.