Background: Growing up I always wanted a saltwater tank. Seeing all the cool colors of fish and coral was awesome to me. Parents said doing a saltwater tank is too difficult so we just had some cichlids when I was younger. Fast forward to being married and have a little extra money I decided to jump in and try to do this saltwater thing. I didn't do much research before buying a tank so I just went to a local fish store and bought what they had. It was a 75 gal tank witIh stand, not drilled. They sold me a canister filter and some small pebbles for sand. I will give them credit and they didn't try to sell me any fish right away. Unfortunately after I bought all this I then decided to do some research on what to get. All the fish I really wanted needed a bigger tank but already dropped all this money on a 75 gal so I stuck with it.

So fast forward and I've had the 75 gal as a FOWLR going for the last 4 years. I like most people did water changes every couple weeks but eventually slacked off. I did have a reef octopus HOB skimmer that I use and a nice Tunze ATO. I stopped using RODI water and just used tap water and slacked off on testing. I used dry pukani for rock and after a year bought some sand so I could get some wrasses. I was lucky that I have never had an algae problems before. I have had ich problems and that wasn't fun. Current live stock include 2 osc. clowns, purple dottyback, yellow wrasse, sailfan fairy wrasse, yellow tang, bangaii cardinal and 2 cleaner shrimp. Within the last month or 2 I got the itch again to go bigger on a tank. I have always read build threads of larger tanks and was jealous that I didn't go bigger from the start. So that brings us to this past weekend...

I got the green light from the wife to pull the trigger on my dream tank: Waterbox 220.6 +plus HD. I thought about Redsea 750xxl but the all the bad news recently I decided to stay away from them. I liked that going with Waterbox that it included pretty much everything. I have never had a sump before so I was nervous to try my hand at plumbing. I decided to go ahead and get the Plus version because I needed to get new lights and it is a little discount if you buy from them. I did finance with the 0% interest for a year so that made it easier to pull the trigger since the only thing that I can reuse on my existing tank is my Tunze ATO.

I am thinking I will eventually get an Apex so I would like the equipment to be compatible with that system. I still need to research on heaters and protein skimmer. Waterbox recommends a NYOS Quantum 160 but I liked my Reef Octopus so might go with one of theirs. My goals for corals are soft and LPS but that would probably be a year I am guessing. Eventually I guess I will need a dosing system for them.

I love reading detailed and pic heavy build threads so I will try to make this one. 6-8 week wait for tank delivery so got some time to think and plan. The Waterbox will go where my current tank sits so I will need to move that first.

For corals the only must is a torch. I like to see movements in the tank so I will try to get more of that type. Still need to do a ton of research on corals

For fish the musts are a Powder blue tang and blue tang. I really like Copperband butterflys but heard they are tough eaters and might pick at corals. I would like to get more wrasses so it might be a wrasse heavy tank besides the 3 tangs.

My first step is to get a water station built. Made some room in the garage this past weekend so I will have some space. I am going to try and make it easy for me so I wont have any excuses. For the pump I was thinking a PanWorld 40PX. I will be purchasing that probably next week. For the containers themselves I was thinking about 2 of these.

I saw on IG someone bought these so as long as no one relies something bad about them I will pull the trigger soon.

For sand in the tank I was thinking CaribSea special grade sand. I watched a YouTube video of a reef tank I liked and he claimed he used 60 pounds. Judging by the calculator it says I need 84 lbs for a 1" bed so I will probably just do an even 100 pounds 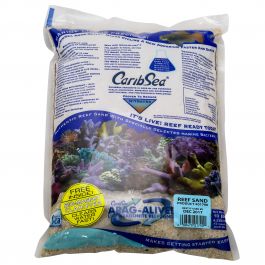 Why does BRS recommend this? When we at Bulk Reef Supply set up a tank that we know will have large amounts of flow our instant choice for sand is the Arag-Alive Special Grade Sand from CaribSea. With its larger particle size, it does not get pushed around like most other smaller grain sand...

For new rock in the tank I am thinking CaribSea life rock. I prefer open aquascapes so maybe 140 pounds of it plus some shelves. 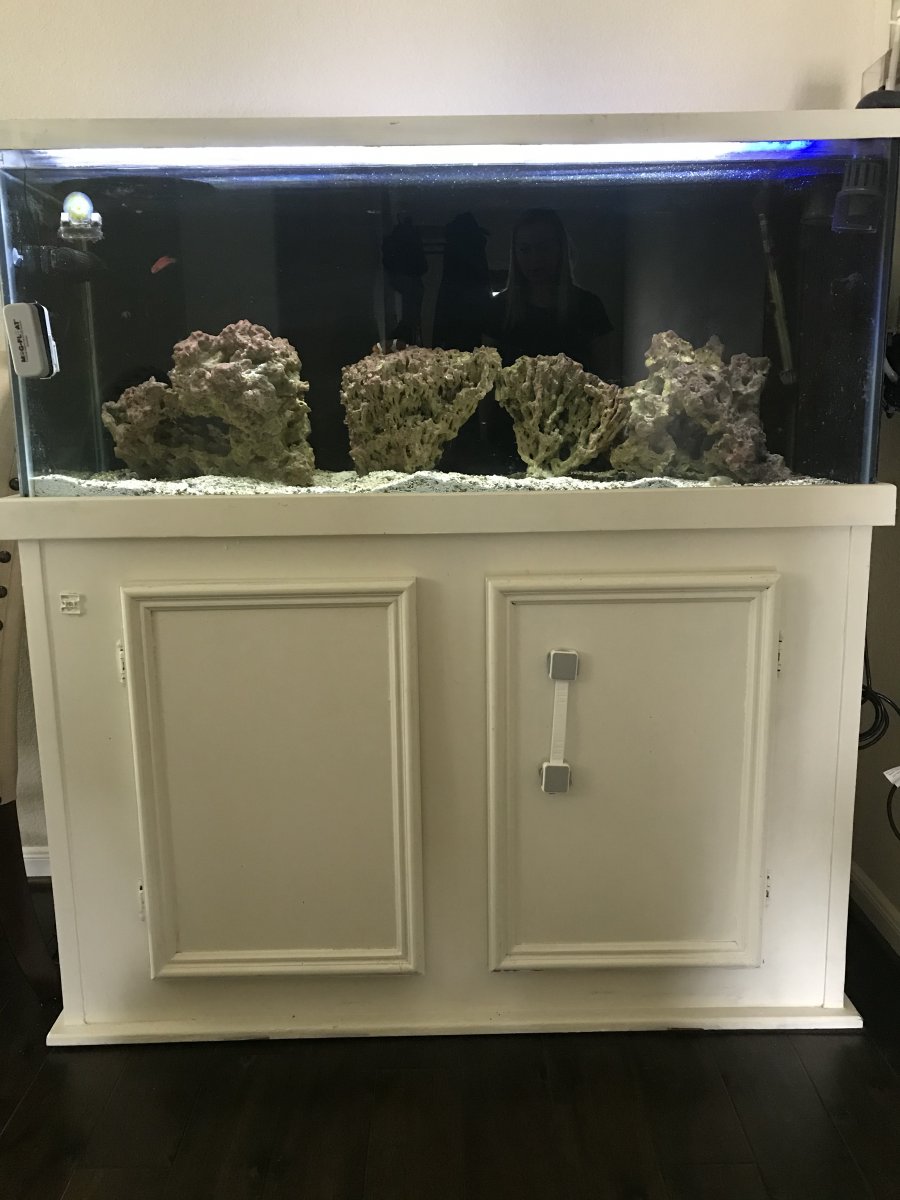 Here is my current tank

looking forward to the new build!

I am looking for a submersible pump for water changes to get old water out of new tank and also to help move water from old tank to move current stand. Leaning this one 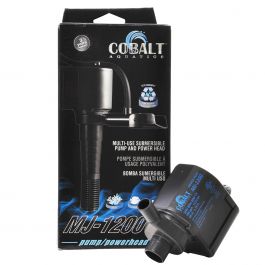 Why does BRS recommend this? The Cobalt MJ line of pumps is great for auto top off systems, reactors, or low flow equipment. These pumps are made in Italy and are much quieter in operation than similar pumps that appear to be identical. With so many applications the Cobalt MJ pumps have some...

jstephens24 said:
I am looking for a submersible pump for water changes to get old water out of new tank and also to help move water from old tank to move current stand. Leaning this one

Why does BRS recommend this? The Cobalt MJ line of pumps is great for auto top off systems, reactors, or low flow equipment. These pumps are made in Italy and are much quieter in operation than similar pumps that appear to be identical. With so many applications the Cobalt MJ pumps have some...

Have you thought about using an automatic doser for water changes? Have one head pulling it out, and another head “dosing” new water.
OP
J

TheShrimpNibbler said:
Have you thought about using an automatic doser for water changes? Have one head pulling it out, and another head “dosing” new water.
Click to expand...

I have read of people doing that but I don't know much about it. I think people have it setup with a huge new saltwater container. With where the new tank will be setup I don't have a spot for something like that. It would have to be under the Waterbox stand and Id be only able to fit a 10-20 gal container in there maybe. I would have to fill that every few days. Atleast that's what I am thinking.
OP
J

I placed an order for the water storage containers. Shipping would have been almost $200 but luckily they are local and I will go pick them up Friday. Will try to start on that this weekend. I had all the plumbing parts I needed in BRS cart but just didn’t pull the trigger. It would have looked awesome but couldn’t justify spending that much on plumbing so I will go the cheaper route and pick it all up at Lowe’s.

I have been going back and forth on my RODI system and I think I will convert my BRS 4 stage 75 gal into a 5 stage 150 gal plus. I looked at my cities water quality report and they use chloramines. BRS chat recommended adding another carbon setup in my 4 stage. I didn’t have the psi gauge/bypass valve/TDS meter so will go ahead and upgrade.

Got an email from live aquaria that they are running a 10% sale for equipment today only so placed an order for the Maxi Jet 1200 Pro pump. Unfortunately EcoTechMP40 aren’t eligible for the discount.

Picked up the 2 75 gal water storage tanks on Friday. Today the pump came in so I got to put it all together. I read the posts about you always forget some PVC fittings when going to the store. Thought that wouldn’t be me but sure enough it was. I didn’t know/remember the bulkhead in the tank were threaded instead of slip so had to go back. That was Saturday’s trip to Lowe’s. Today when pump came in and I was laying out stuff I noticed I forgot a ball valve. While I was there I decided to buy a PVC cutter. I had a PVC saw but I did it for a few seconds and realized quickly I wanted something much easier. This was my first project with PVC and I now have even more respect for people who make it look clean. I bought 2 sticks of PVC and ran out; need another foot to be done 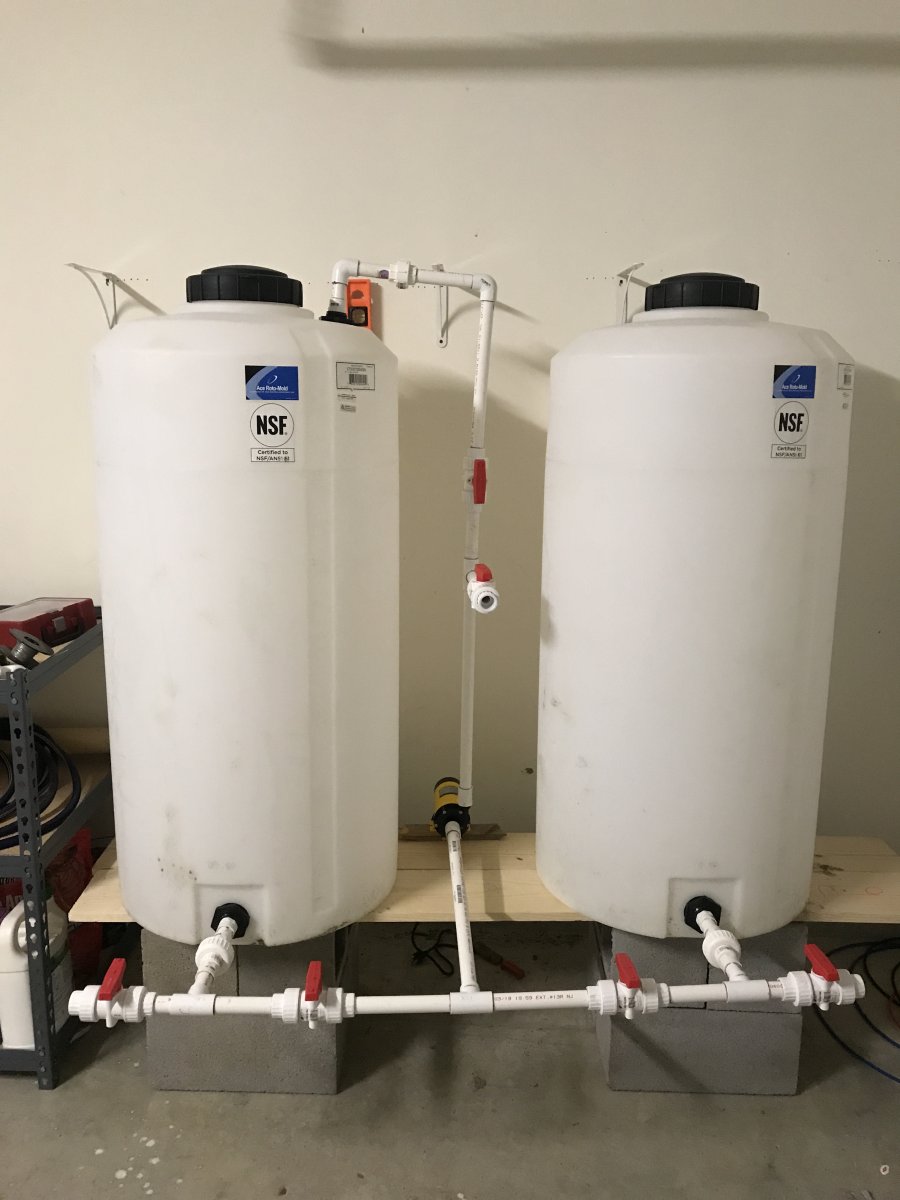 Following along! When do you get your Waterbox? We bought the same tank and I think we'll be receiving it in two weeks.
OP
J

esther said:
Following along! When do you get your Waterbox? We bought the same tank and I think we'll be receiving it in two weeks.
Click to expand...

Thespammailaccount said:
Will buy the rocks in the old tank if you are starting with new rock
Click to expand...

Thespammailaccount said:
Will pay more than a fair price and can pick up I am in TX as well
Click to expand...

I am not sure what I am doing with old rock. Wife wants to sell the current tank to recoups a little bit of money and I want to keep it as a third QT tank. I already have (2) 20 gal tanks for TTM method. Iv thought about about doing that then put the fish in the 75 and watch a little longer. I will keep you in mind though

jstephens24 said:
I am not sure what I am doing with old rock. Wife wants to sell the current tank to recoups a little bit of money and I want to keep it as a third QT tank. I already have (2) 20 gal tanks for TTM method. Iv thought about about doing that then put the fish in the 75 and watch a little longer. I will keep you in mind though
Click to expand...

Alright will pay $8.00/lb for the Pukani if you change your mind
OP
J

Ordered 80 lbs of Caribsea Life Rock and that came in today. Here is a quick aquascape design but thinking about getting more. Not sure to get same kind or get the shapes or shelf type. 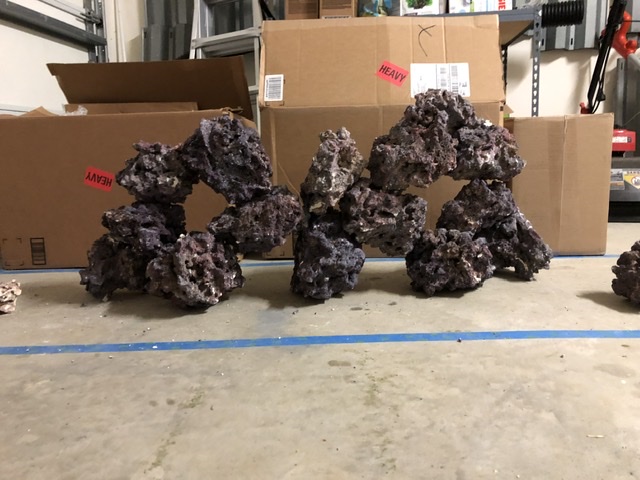 Ordered a pressure gauge, TDS meter and a bypass valve for my RODI unit from eBay. So far just the gauge has come in. Went ahead and placed an order from BRS for the filters and RO membranes. A quick check with the pressure gauge on outside faucet read 60 psig.

Here are Jim and Dwight. I think these 2 caused my existing tank to have Brook in it. 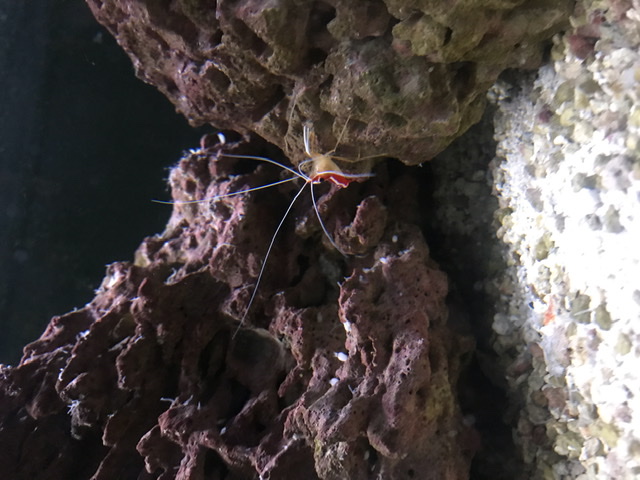 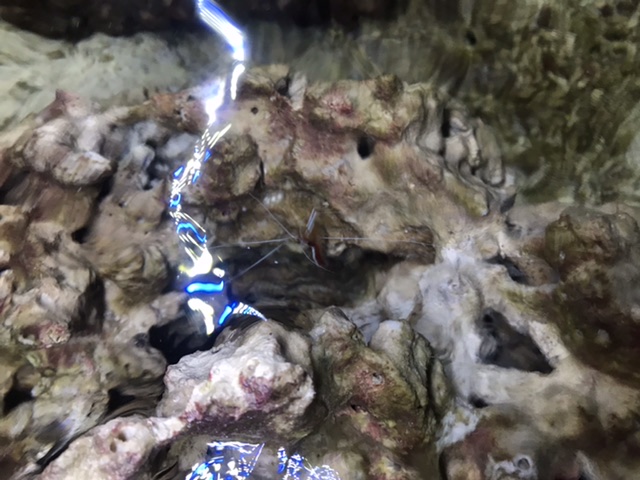