I added a Lemon Peel angel fish to my waterbox 60 on Sunday. I decided to take the risk as my tank is sps dominant . with two lavender tangs, a clown, yellow gobi, file fish and a blue damsel. my tank is pretty established and I noticed that the angel went for sponges and small algae on the rocks. any advice on feeding angles other than the usual pellets,cubes. thanks

Sad to report my Venustus didn’t make it. It came in looking awesome but never wanted to eat. I’ll have one again at some point but not until I upgrade.

Dang sorry to hear that.
T

Asfur angel!! Love the streamers!! Thanks for looking!

Thomashtom said:
Asfur angel!! Love the streamers!! Thanks for looking!
Click to expand...

That’s a nice fish! How big is it and how big was it when you got it?
T

Hi, it’s about 7 inches plus steamers. Had him for about 5 years since he was 3-4 inches. Thanks

Good luck. Hope you have him for a long time to come.
M

Anyone keeping a regal, asfur or scribbled in a shallow tank - 20" tall?

The tank would be 5' long by 24" wide by 20" tall. Wondering if I could start out with a small scribbled or regal angel and how long that tank would work for it.

mandarin417 said:
The tank would be 5' long by 24" wide by 20" tall. Wondering if I could start out with a small scribbled or regal angel and how long that tank would work for it.
Click to expand...

that would work . the fish keepers in Asia keep big fish in small tanks it will be a while before u need a bigger tank I say about two-3yrs

I’m an “Asian” hobbyist and yes, I see plenty of people in this part of the world do exactly what you mentioned. However, it almost makes me sick to the stomach when I see a clearly undersized tank crammed with every Tang, Butterfly, and large Angel the owner can find. I know a guy who told me “fish are too hard to keep” when he put 4 Tangs (3 of them notorious ich magnets- Powder Brown, Clown, Blue Hippo and the 4th a Yellow) into a 55-gallon.

From what I saw they weren’t small juveniles either (not that such would make me change my mind). Unsurprisingly, he got a major ich outbreak and lost all 4 of them. What did he do next? He went out and bought more Acanthurus Tangs and a juvenile Emperor Angel and….. some time later, the same thing happened. Then he told me “fish are too hard to keep.”

There’s many examples of fish keepers like him in this part of the world, and I don’t think it’s anything one should try to emulate (“other people are doing it”- but may I ask, what is their idea of the long-term?) no matter what part of the world they’re from.

I’d rather under-stock a bigger system than cram a smaller system. Recently I’ve also warmed to the approach of happy fish that are active and demonstrate natural behaviors (especially with regards to pairing / harems) over “collections” of fish and corals where it’s about the volume and variety of species over behavior. Of course, to each their own. If having singles of many a species as possible is someone’s personal preference, that’s fine though IMO not the most interesting. However, I think just because many of my fellow reefers in this part of the world are practicing bad stocking methods, doesn’t mean we should give the green light to them.

Having said this, there’s still a number of people who know their stuff and excel at it. Guys from Japan have collections of deepwater fish that would make us kill. Jimmy Ma from Hong Kong has a whole section of an apartment complex dedicated to his systems, granted they’re FOWLR but he’s a guru when it comes to rare fish (and some of them are like uber rare). Anything that could make their way to the West would probably be sold to high-end fish collectors from Japan, Hong Kong, and Singapore before they make it over to North America, Europe, Australia etc. And these collectors have deep pockets and connections.

I’m not so sure about Hong Kong and Singapore, but the Japanese love their Anthias, Basslets, and Butterflies. From what I observed they don’t seem to be as big on Tangs.
Last edited: Nov 2, 2021

Are angelfish monogamous / is “monogamy” (as in having the same partner / partners for life) an option for them (for the species that form harems)?

All moved and settled in the new house. The gang patiently awaiting their tank to cycle. 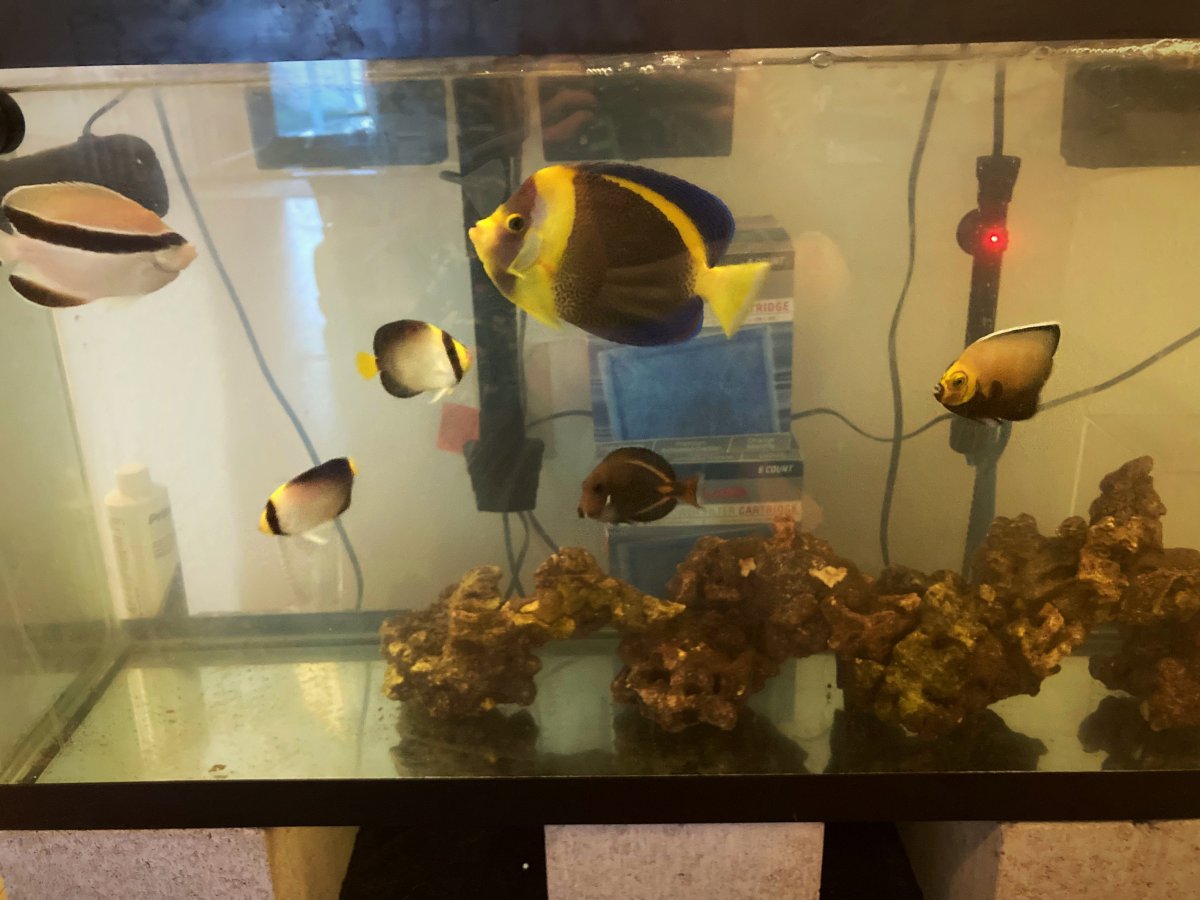 How big is your setup?

Zionas said:
How big is your setup?
Click to expand...

Adding Angel With Other Fish