Aka the black ribbon eel in the juvenile form, the blue ribbon eel in the male form, and the green ribbon eel in the female form. This is another notoriously difficult fish to keep, I've had some success with one and would like to share my observations. I've witnessed a couple friends and other hobbyists lose them rather quickly, even when they were eating. The 2 biggest obstacles, and with most predatory fish, is treating for parasites and feedings.

I got my guy almost 2 years ago as a juvi barely 12". I do recommend the same parasite/deworming treatment as would with lions, I got him before I was using general cure. I treated the tank with prazi pro and actually got him eating dead food within 2=3 weeks. I then mixed in metro/focus with his food, feeding every other for about 2 weeks. One friend had a black ribbon come in eating dead food right away, the eel still only lasted a few months. I have seen eels and lions live a couple few months then stop eating and die, yeah they can live this long with internal parasites. A ravenous appetite is also a sign of internal parasites, think about it, the worms are eating all the food. So treating with Metronidazole and Praziquantel is highly recommended.

Upon arrival I put him in a 40B qt/observation tank and gave him a couple of small mollies and a few ghosties to live with, and hunt down at his leisure. 2-3 days later I could find hide nor hair of his prey, so I started to tease him with some dead food. No avail, so I stocked the tank with live again, watching him hunt I quickly realized how flinchy and delicate he ate. He was also very scared of the tongs, initially this guy was a scaredy cat. So I got these slim stainless steel tongs and realized he might do better with small slivers of dead meat meat, instead of something chunky.

After slicing foods into thin strips and using the slender tongs, I got him start taking dead food within 2-3 weeks. He will eat silversides, squid, octopus, silver fish, and krill. You need to be very delicate, tease him with it, make him chase it, sometimes he'll take it from the tongs, sometimes I let it go for him to chase down. He's still just as tough today, these guys are notorious to just stop eating dead after a while, so maybe continuing to occasionally offering live foods may be advantageous. I give mine a live molly or a couple of guppies at least every couple of weeks or even more, and ge has a chance to chase down a live ghostie that my lions let escape. Another guy I know lost one after several months while eating a dead only diet, I think he had been underfed. It's tough to get this guy eating sometimes, so some think some people think if he grabs a couple of pieces he's fine, while it can be likely he's being underfed.

My guy has now been turning blue for what seems like almost a year, I'd say he's at least 30-36" now. Initially he was in a 125g, the tank was wiped out by velvet and I decided to shut it down. The eel survived and I put him in my 90g lions reef. These guys are most often recommended for a 125g or larger, but he seems to be happy in the 90g. He does have a pvc home, because he is slender a 1.5" pvc is fine and easy to hide. Because this is his re-home, I couldn't bury the pvc, the tank had already been up for years. 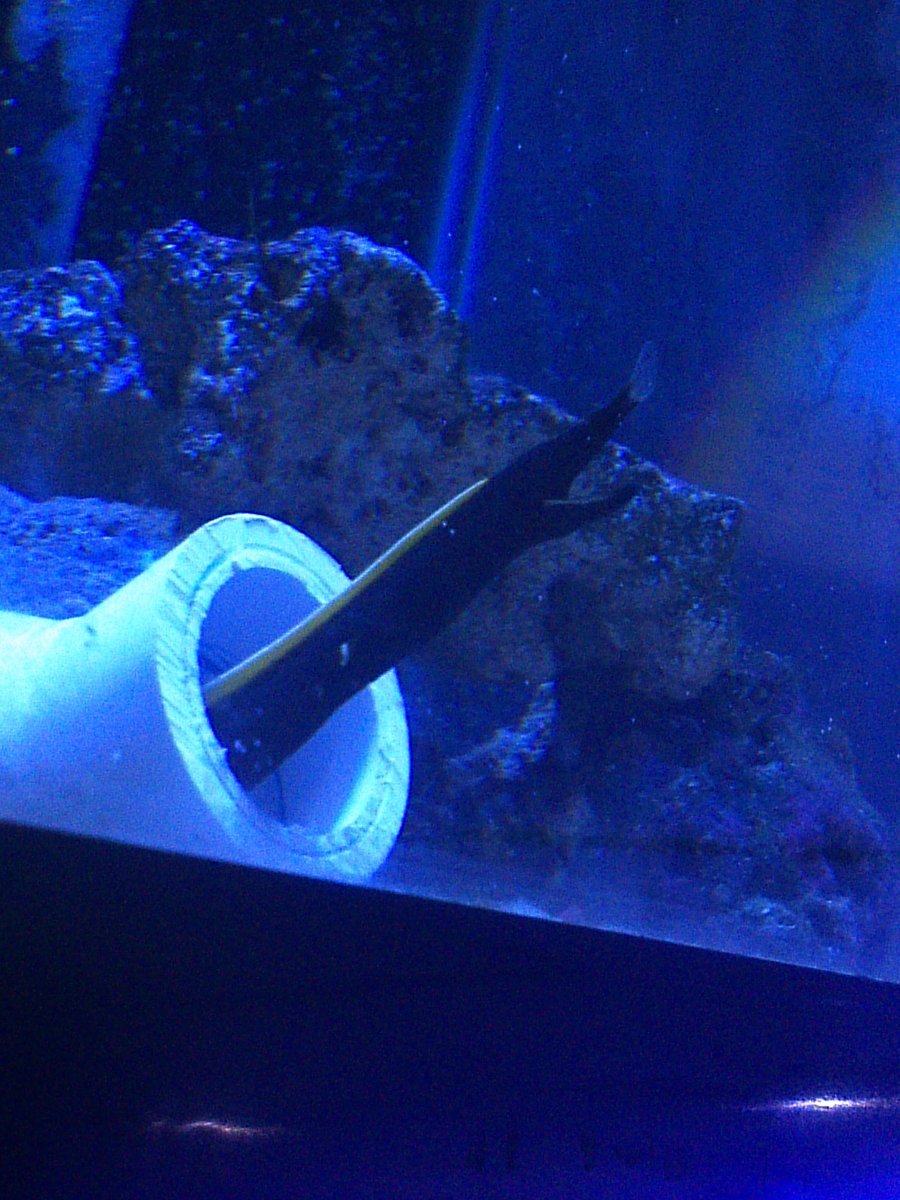 Nice write up. Eels are so cool looking. Would love to setup a tank just for them some day. When your tank had the velvet wipe out, did you treat the eel?
OP

No I did not treat the tank with the eel, I can't remember how long i waited, but after a while I just transferred him over. Unless an eel is highly compromised they are pretty much immune to diseases such as ick and velvet, I don't know all the technical terms, but eels have a super slime coating that such diseases can't attach. I have had, and witnessed several tanks of such disease breakouts and the eels never suffered. I've also transferred eels from said tanks without transferring the disease as well. Eels do not handle copper well, even if they survive treatment, it greatly reduced their lifespan, and just as lions and through my own experience, they die of likely organ failure a year or so later.

C'mon man, still transitioning. So he is still thriving though, and alive. I did start giving him more live food lately, he seems so much happier, alot more active. Also seems to thickening up a bit.

how cool! any updates? I have always wanted to keep one and am inspired by your success!
OP

I gave him to a friend and he is doing well, I made him promise to continue feeding mollies. The 90g proved too small as he matute and got more active and larger. This was not his original tank, these fish will do better in a 6' tank.

Final thought; for long term success live food likely must be included in their diet. Through my experience, a friend that made múltiple attempts, some other reefers, and friends from a few lfs; there was a definite thread. Most could never get them to take dead food to begin with, the ones that did it was short lived. They would go on hunger strikes and either had to reintroduce live food or let them starve. There seems to a threshold when they would not take any food again, after a few repeated hunger strikes. Don't say "they never ate", "they stopped eating"; "no, you starved him".

How long do they usually last on dead food? I’ve had mine coming up on 9 months or so and he never refuses dead food anymore, though I do feed live at least a couple times a month.
OP

Han said:
How long do they usually last on dead food? I’ve had mine coming up on 9 months or so and he never refuses dead food anymore, though I do feed live at least a couple times a month.
Click to expand...

I think thats the key that you still do include live food in his diet. I see the problem when its dead only. When mine starting doing the hunger strike dance, I gave him a couple of mollies, then he went back to taking dead. I found he had no problem eating both, altbough feeding dead is still just frustrating sometimes. Its when people attempted the dead only and then tried the starvation method to get them eating, or eating again, that it ended badly.

I did have to do live exclusively in the beginning, he was eating frozen at the lfs but when I got him home would only eat live for a month. Seems pretty typical. It just took a LOT of patience to get him on frozen again, I can see how it would be too much for some people, I was spending like half an hour every day trying to wean him.

I did give this eel to a friend as he out grew the 90g. He was well over 30" and very active. I hear people wanting to keep these eels in a small tank, I strongly suggest at least a 6' tank. he was originally slated for a 125g, but thing's happened and he ended up, growing up in my 90g Lion's Reef. I did find this eel does well with a hybrid diet, adding in live feedings of mollies to keep him excited. Times when I went for long periods on dead feedings, he would eventually go on a hunger strike. I had witnessed friend's time and time again fail when they tried to hold out on this eel from live feedings. Even after getting this eel to feed on a variety of dead foods, most times it still took alot of patience and perseverance to get him to eat enough, the operative word is enough. Very enjoyable pet.

R
Possibly getting another eel. Which is the best choice for me?

A
How long for foxface to come out of their shell?