The tank that started the bare bottom craze

Here it is, iirc it was 500 gallons. He used a 90 watt uv sterilizer and skimmed with a bullet 3 both on iwaki pressure rated pumps (think flow and pressure) Eductors for flow on an iwaki pump in the display from uv. Halides on only 2 hours a day! Said uts all.they needed. A couple of fluorescent tubes. Bottom was plastic for rocks called starboard. Had a chiller as he lived in florida.

Thats it. No refugium, no filter socks.

Whats interesting is how clean the system is. Thats because of the uv and skimmer. Skims wet. Just refilled with water letting salinity drop and corrected it later on.

Now as uv kills algae, they become easier to skim- where without uv they arent.

He dosed two part. Not sure if hes on the forums anymore. This person was a microbiologist who worked for noaa.

Tell me why do you think this worked so well? 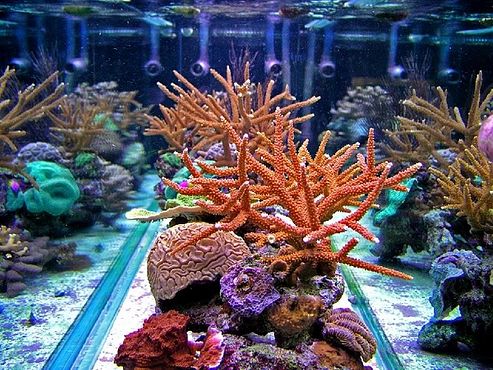 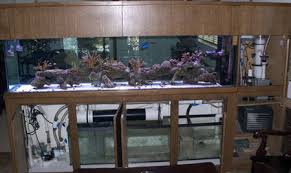 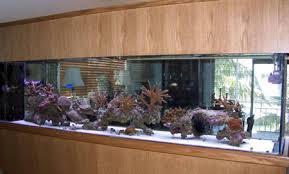 Barebottom tanks set up like this were called Berlin Systems which came from European reefers. They were popular a good 15-20 years before that system you pictured was around.

I was running barebottom tanks when I started in 1989 and still do now. Berlin systems are simple and have decades of success.

I would say he did popularize starboard bottoms, "cooking" live rock, and UV use back then, so that part of his approach was unique. At that time there were dozens of threads Barebottom vs DSB(very heated topic) , so he didn't really create any BB craze.

His system didn't have many fish. so the bioload was low with no nutrients hence the reason he ran his lighting the way he did. He would have killed everything if he ran his lights on higher par or longer periods of time with the MH.

The UV kept algae down, not sure about helping skim production as it's never has been verified or proven it does that.

Bomber was a great asset and I really enjoyed his contributions back then as he shared a ton of info on numerous topics. It's a shame he went underground.
Last edited: Aug 29, 2020
H

" Barebottom tanks set up like this were called Berlin Systems which came from European reefers. " ....you need to do some fact checking on that statement , bud....

" Bomber was a great asset and I really enjoyed his contributions back then as he shared a ton of info on numerous topics. It's a shame he went underground. " ...more like a pompous , highly opinionated self proclaimed reef expert that made it seem like his way was the only way...

I see plenty of NON-BB tanks on here looking just fine..I use a modified Jaubert -Plenum setup and that has served me well for decades...There's more than one way to have a successful reef tank-that's my point.
Last edited: Aug 29, 2020

Lol, obviously you have your opinions and I can understand why.........he did ruffle a lot of feathers in many threads back then.

If you go back and read threads of his that were give and take from reefers where he mainly just let people work through the understanding whatever the topic was there was plenty to learn. RC was not the main threads or forums where he did a lot of that btw.

I was merely adding more history to the tank and my take on why it was successful. I'm not sure why it was important for you to be so fired up about him or his ways.

Please educate me as you seem to know the full history about the Berlin system.........live rock and a skimmer was the basic backbone from my memory and readings.
H

" RC was not the main threads or forums where he did a lot of that btw. "...yeah him and his buddy-gregT took that show over to TRT because R/C was getting fed up with all the flaming going on...and they could get away with more over there...
Glad that era is over ... Research the berlin method yourself, bud..it may surprise you to find out many berlin method tanks had sand beds...

Lol, whatever.............it's obvious you're just here to incite people & could care less about adding anything useful to this thread.
R

over 20 plus years I’ve run about everything, but every time I experiment with sand I end up removing it.

Here’s an article on a successful system of mine from years ago, I’m a fan of low tech

I think there is a misconception, I have not read that the Berlin Method necessarily require a sand bed, although there are many example of it that include it. The Deep sand bed (DSB) or even plenum is not the Berlin method.

Hot2na said:
" RC was not the main threads or forums where he did a lot of that btw. "...yeah him and his buddy-gregT took that show over to TRT because R/C was getting fed up with all the flaming going on...and they could get away with more over there...
Glad that era is over ... Research the berlin method yourself, bud..it may surprise you to find out many berlin method tanks had sand beds...
Click to expand...

Show me on the doll where he hurt you.
H

Big E : I did add something useful to this thread...and it says it all = " There's more than one way to have a successful reef tank-that's my point. "

45 yrs of watching people use every method you can think of in this hobby and that's my take..

quote from a 2011 article about the Berlin method : " When using the Berlin method of marine filtration you should have your live rock in a loose arrangement so that it allows for good water flow. This helps to prevent wastes settling on your deep sand bed. "
Last edited: Aug 29, 2020

Ragnar said:
over 20 plus years I’ve run about everything, but every time I experiment with sand I end up removing it.

Here’s an article on a successful system of mine from years ago, I’m a fan of low tech

The modern "Berlin method" of aquarium keeping began with the work of Peter Wilkens and the marine aquarium club in Berlin. Although these systems are called natural systems, they do differ from those described by Eng (1961) and Emmens (1986) by incorporating protein skimmers in their design.

The basic elements to a Berlin method aquarium include: strong light, live rock and sand, protein skimming, and calcium additions. A trickle filter is not used as the live rock and sand perform the biological filtration. It is also common to see automatic top-off systems in place to offset water evaporation due to the strong light.

This site is dedicated to sharing with others my efforts to create a successful reef tank based on the Berlin method.
D

This thread does remind me of the old R/C days... Lots of arguing about silly nonsense. The site may change and the faces are different but reefers will be reefers and continue the battle to prove who's right... Lol

Bomber was the first person I ever saw notate the paradox of adding peroxide into the reef aquarium causing orp drop vs the universally predicted spike. it was in 2009 in Randy’s forum, that turned out to be a constant pattern among tanks / thousands report it commonly now and none report the spike. neat pattern emergence at least.

To the OP and the question at hand... "Tell me why do you think this worked so well?"

Regarding the water clarity with no mechanical filtration or sand... my guess - not many fish!

I am looking at the water clarity and comparing it to the BB system that I am running as a BB newbie (4 months), and my water is not that clear - despite running BB, mechanical filtration, and UV.

In addition to being new... I have lots of fish and relatively few corals at this point. I am hoping that as the tank matures, and the biomass of corals goes up... my water clarity will improve.

I don't know if this qualifies as a 'Berlin system' - but - I have a 140 tank (with sump), live rock a very very thin sand bed - <1/4 inch, a sump and a skimmer. I run 1 bag of chemiclean blue. And try to have lots of flow with a very open rocks cape. I have clear water. 3 tangs (fairly good sized - a tusk, copper band and a couple smaller fish). I do 40 gallon water changes every 2 weeks. Don't have a refugium, reactors, etc. Oh - and I dose 2 part per the BRS method. Like some others here - I was not really aware that the Berlin method was 'sand-less' - or bare bottom. I have nothing against bare bottom from a management perspective - I just don't like the look. I use no 'trace elements' or additives (besides fish food and the 2 part). I have a long photoperiod - starting slowly in the AM - up to 100 percent mid day and slowly down until evening. I do not concentrate on 'blues'. Oh - and heresy alert - My 'ATO' consists of adding RODI water when I start seeing bubbles coming from the return pump - about 5 gallons at a time. It all goes to show - there are lots of ways to do things. I am posting new pictures (update) today - which is why all the detail. Note - the occasional aphasia - which occurred suddenly - with no real new additions. But some Berghia is getting ti under control (the filefish, copper band and peppermint shrimp do not seem to touch it).

I run Berlin and have clear water however its with the sandbed. Let’s not forget that sand can actually trap particulates and actually helps clear up the water. Hence sand filters on pools. However my sand grain size is larger than most, so It doesn’t blow around much and I have tons of wrasses keeping it turned around.

Also I’ve been reading up on this stuff for the better part of 2 decades and the main principles of Berlin methodology was using live rock for biological filtration Versus an anoxic plenum system for complete nitrate reduction. Berlin was rock and a skimmer and plenum were supposed to be able to go skimmerless. HOWEVER, this is 1970s-80s discoveries here. We have learned TONS more since then, lots of ways work, it been more than proven that there are a million ways to make reefs work once we understood how they ecosystem needs to function. Berlin discoveries were only slightly past the days of realizing corals need quality light...Stone age stuff here..
So technically everyone above is correct.

I remember this tank and the Acropora cervicornis, and unfortunately also the unfortunate acrimonious comments thrown back-and-forth on RC...

As to why it worked well, well we now know that there are many ways to skin a cat and this was one of them. Lower fish bioload, mature ocean live rock with associated bacteria/archaea/periphyton, UV to minimize water column micro-algae and bacteria and skimming to remove particulates.

I was keeping saltwater when the Berlin system became known internationally in the late 70's/early 80's. Rubble, not fine sand, was the typical substrate used (because of the strong flow) and gravel vacuuming was employed and/or a Convict Blenny was recommended to keep the detritus stirred up for the skimmer to collect.

The system quickly morphed as people began experimenting, so it's no wonder that some of the original methodology has been obscured.
Last edited: Aug 29, 2020

Pretty cool.
Brings back some old memories from the late 80's

Enough flow for my UV sterilizer?

H
Can a canister filter attach to bottom bulkhead?