Roosterjack said:
What happens when a reef guy gets the opportunity to take a run down 120 gallon FOWLR off someone’s hands? Depending on who you ask, the answer ranges from “another hole in the basement we pour money into” to a challenging opportunity to build a great reef on the remains of a previously rather ugly and poorly maintained effort at a marine aquarium.

My goal for this thread is going to be seeking a lot of diverse and seasoned advice. I consider myself to know just enough to be dangerous. I am hoping the rest of you will help steer me around the catastrophes.

The next few posts will be to detail the raw materials I have to work with, my initial thinking, and hopefully some friendly R2R reality checks. Thanks in advance to everyone who will hopefully contribute.

Rooster (Who needs a real signature!)
Click to expand...

After scrapping the 120 gallon hand-me-down due to a long list of tribulations I have decided to do remove the headaches associated with an undrilled tank of indeterminate age. The time to re-boot the build thread has arrived...

When I got my 90-gallon reef it was purchased used and seemed like a great deal at the time. The seller parted with the tank and all the basic gear needed to run it and I parted with $600 in cash. As part of the deal came rock, some livestock, and a few odds and ends like nets, some salt, etc. I was so excited that my wife finally agreed to let me re-enter the hobby that I charged ahead like a kid with a toy store gift-card. I did almost no homework and jumped on the first deal that looked good.

The regrets did not take long to arrive. I determined I immediately either needed or wanted to replace about three quarters of the gear, and wished I could replace it all.

1. The ultimate reef lesson that is so hard to learn, namely that there is no shortcut to a genuinely stable and rewarding reef. Not to say that someone with the right knowledge and experience couldn’t purchase an established tank and successfully move it. I am sure it has been done many times by those who can recognize the state of the gear, livestock, etc.

2. Low-end gear is even lower end when you get it used.

3. Imposing your plan on someone else’s foundation doesn’t give great results.

1. No shortcuts. From the planning phase forward the watchword will be patience and careful consideratio.

2. Go as large as possible within the framework of budget and physical space.

3. No re-use of equipment other than Apex and Trident.

5. Have a longterm stocking plan for fish, inverts, and corals.

I selected a 180 gallon Seapora Reef Ready aquarium. I have never had a tank with the glass "eurobrace" panels on top so I am somewhat concerned as to how this will impact putting a mesh top on it, and how badly it will affect the lighting. Input on this topic would be very much appreciated.

I also am aware of the overflow considerations, and honestly was simply not willing to do the drilling for a non reef-ready tank. So while a more modern overflow would be grand, my risk averse nature says "Hell No!" to potentially cracking a $1000 aquarium. 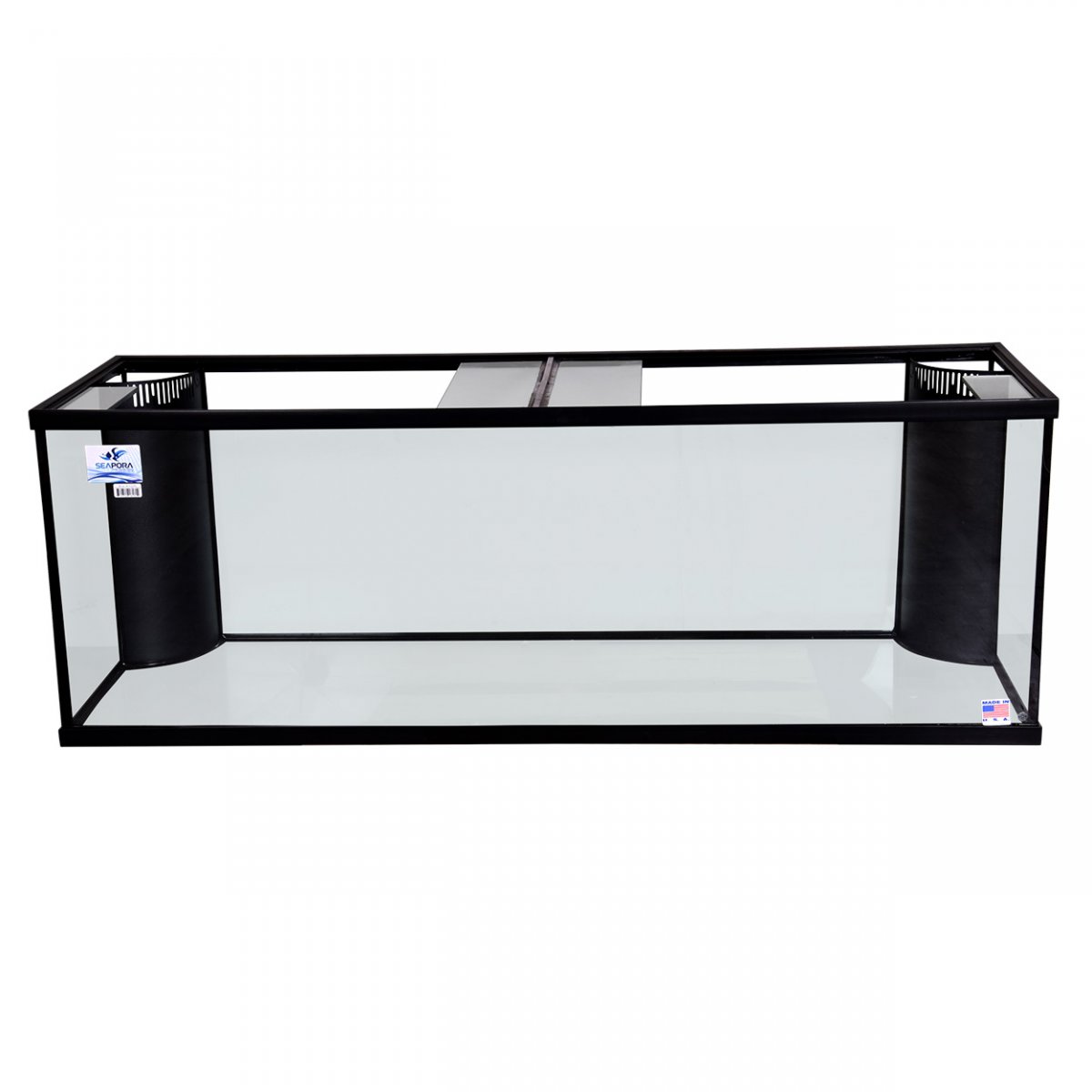 I got a great deal on what I think is a really great if less known sump. The Pro Clear Red Flex Reef Sump 400 is an absolute beast in terms of size, and has some solid features. 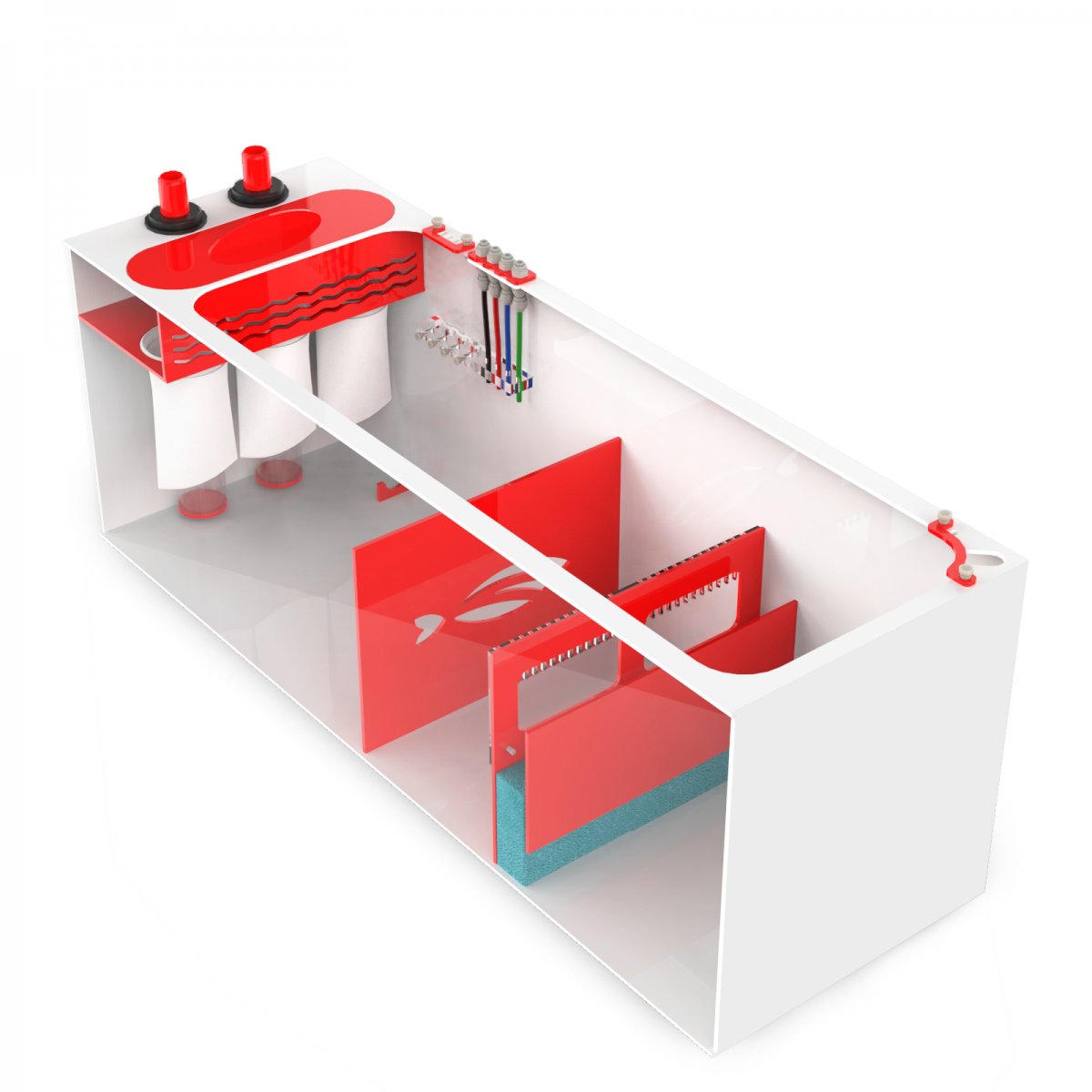 Drains are hard plumbed at 1" and each runs to its own inflow to the sump. Cepex ball valves installed on each drain to allow for tuning or closure as needed. This sump is MUCH quieter even with the old-school Durso overflow pipes.

Return pump is a Neptune Systems COR20, with a short section of silicone hose for vibration isolation feeding into 3/4" hard plumbing to the two returns. I added the ability to connect a second pump or other piece of equipment, but I would be reluctant to say it is a manifold as I may never use that second input pipe. I have closed it off with a quality gate vale and also have the capability to close of the current return with a similar gate valve should the need arise.

As recommended by many, I made liberal use of unions in both the drains and returns to allow me to adjust or work on the plumbing far more easily.

Ran several days of leak testing and only had to make a couple small fixes, so I am very pleased with that.,

I have a 15 gallon glass Innovative Marine reservoir installed in the stand. Between it and my beast of a sump I have pretty much filled that six foot stand end to end! I could have bought a reservoir to match the sump but I had won the Innovative Marine in raffle over a year ago and had it sitting in a box. The reservoir will be paired with a Tunze Osmolator, which is the most reliable option by far in my opinion.

The reservoir is replenished via a direct feed to my RO gear in another area of the basement, with overflow safety provided by a float valve, and an optical sensor that will trigger an alarm on my Apex if it exceeds a certain level. One of my least favorite, and most often forgotten tasks with my old tank was hauling buckets of RO water to refill the ATO reservoir. Forgetting leads to salinity swings and the potential for ruining the ATO pump, neither of which I wanted to see going forward.

I also plan to add an optical sensor to warn me if the reservoir gets too low...I prefer to not find out about a refill failure from the salinity of the tank!

I have always been a fan of the "Kessil Look" the sort of trademark shimmer that is a topic of great debate here on R2R. I also tend to favor the "blue look" that is also a matter of great debate. To each their own, and even within my own home my wife prefers a bit more white in the tank than I do. I learned long ago that allowing her feedback to carry weight does great things for the reef budget...and so the whites are a bit higher than I like. Happy wife, happy reef!

When I first began to plan the tank I was looking to do three or four of the A360X units mounted on the back of tank brackets. I was still not 100% set on the exact position of the tank in the room so this seemed the logical mounting path.

As time went on and delays piled up I ended up being able to move to the AP9X units. I have two of these hung from the ceiling using the Kessil mounting kits. The current setup has them approximately 10" over the surface of the water. I positioned them to allow for a reasonably wide range of lighting levels to accommodate a mixed reef design.

These lights kick out impressive PAR readings via the Apex PMK probe. I moved the probe around quite a bit and ended up with 400-ish PAR at the high portions of the aquascape, with varying readings at the sand bed and under overhangs, etc. I may end up dialing back the lights a bit as it seems higher than I need for the corals I intend but I know what I can achieve if I need to. I can also raise or lower the lights, but the higher they are the more of a vital glare they have when sitting and viewing the tank.
OP

The protein skimmer on my setup is, for now, the same Reef Octopus Classic 150INT that was used in my older 90 gallon tank. This takes me from being a bit overpowered to a bit underpowered in terms of skimmer rated capacity. I am really unsure what my eventual direction will be for a new skimmer but I can say that I am not eager to pay the pretty crazy prices for some of them.

Dropping $800 or more on a skimmer is going to be a really tough pill to swallow. In order to get something DC and controllable at least, and from a well regarded brand. I have to wonder if pairing my existing skimmer with a algae turf scrubber would be enough to keep nutrient levels low?

A
How much time does it take to maintain a salt water tank?