Hi, I'm Turtle and I love sushi. I also love reef tanks, so what better to do than to combine the two and fill a reef tank full of sushi! I know what you're thinking, "If you fill your tank with sushi the fish won't be able to swim." Well, you're right and that would be a waste of good sushi, not to mention very expensive. I have this thought tho, that a sushi chef uses different colors and textures to create edible art, sushi is just as much visual as it is edible. Well I want to recreate that visual art in my reef... so, a reef tank full of sushi!

Ok so I had a running reef tank in the spot where this one was going to go. It was gas station sushi, yeah... no good. We can do better than that. With some help and encouragement from friends, we managed to move it out of the way and get this one set up in a weekend.

New tank and stand in place and leveled. This one is MUCH lighter than my previous tank. It took all we had to move the old one out. Three years of salt creep and splashing water over the side had glued the tank to the yoga mat, as well as gluing the yoga mat to the stand.

Placing the rock, first try looked so good I decided not to mess with success. Two perfect little sushi rolls.

Sand in and adding water. Like the rice that brings everything together.

Oh boy, I remember this sand now. Super cloudy, touch it and you create a dust storm. Should have rinsed it. After I got all the water in, I added a bunch of bottled bacteria as I have no place to keep my fish so we're going to have to power thru a cycle with fish while keeping ammonia at safe levels. I have additional bacteria and prime on hand and will be checking ammonia daily, so far so good.

Dust had settled by Monday morning and I added the first inhabitants, this huge brittle star that I had no idea was still alive and my 4 year old coral shrimp. He's the sushi chef.

Moved the fish over. They were in a Brute can with a heater and a power head. I also stuck a cheap LED light over the top, waiting on the mounts for the Kessil so I can put it up there.

I also moved my red and green trachy over. It's the best looking sushi roll from the previous tank, the rest are looking a bit past their expiration date and are in quarantine.

Wow thats cool. How did you protect against bubble and aptasia

sfin52 said:
Wow thats cool. How did you protect against bubble and aptasia
Click to expand...

All new rock, sand and water, and vinegar bathed any equipment that came over from the last tank. The red and green trachy never had anything grow on it. The bottom skeleton is bleach white from being buried in the sand and the flesh never receded. All my other corals(not many) and snails are in QT right now after cleaning and peroxide treatment to make sure no bubble algae comes back.

Fudsey said:
Good to see you back at it again ! !
Click to expand...

Agree it was not the same with out you
OP

Fudsey said:
Good to see you back at it again ! !
Click to expand...

sfin52 said:
Agree it was not the same with out you
Click to expand...

Thanks guys. I contemplated quitting several times but I get attached to my pets. Dogs, cat, fish and horses... they stay with me until the rainbow bridge.

hey there..look at that ...jumped in way late in Fairy tale.. got cha from the start now!!!
nice start going..beautiful horses..

fishguy242 said:
hey there..look at that ...jumped in way late in Fairy tale.. got cha from the start now!!!
nice start going..beautiful horses..
Click to expand...

As the chef at my favorite sushi bar would yell every time someone walks into his restrauant, "HAJIMEMASHITE!" (sort of fits here)

Don’t let him fool you guys...the old tank was absolutely bursting with life!! Never seen so much...life...in a tank

A lot of truth. Hows the wife's tank
OP

sfin52 said:
A lot of truth. Hows the wife's tank
Click to expand...

This is "the wife's" tank. So it was set up as a FOWLR... then she insisted on getting corals. Angels ate the corals, she and I both stopped taking care of it because I just had too many tanks going. It was torn down, tried to keep the fish but they started to nip my LPS. Set the Reefer back up and moved my freshwater tank into it. Ended up contracting black beard algae, didn't want to spend the time or money to get rid of it and I ended up moving the freshwater back into the 36 bowfront(mother in law is supposed to take that tank) and we set the Reefer up as a Reef, finally, last weekend.
OP

Day 7 of Sushi tank... everyone still looks fine. Fish are active, no signs of stress and ammonia is staying at or below 0.25ppm. I've dosed prime a few times just to make sure everything was safe. The trachy roll has been a little upset, but it went from DIRTY poop water to squeaky clean... it needs some time to adjust.

Nice to have you back and a fresh start. 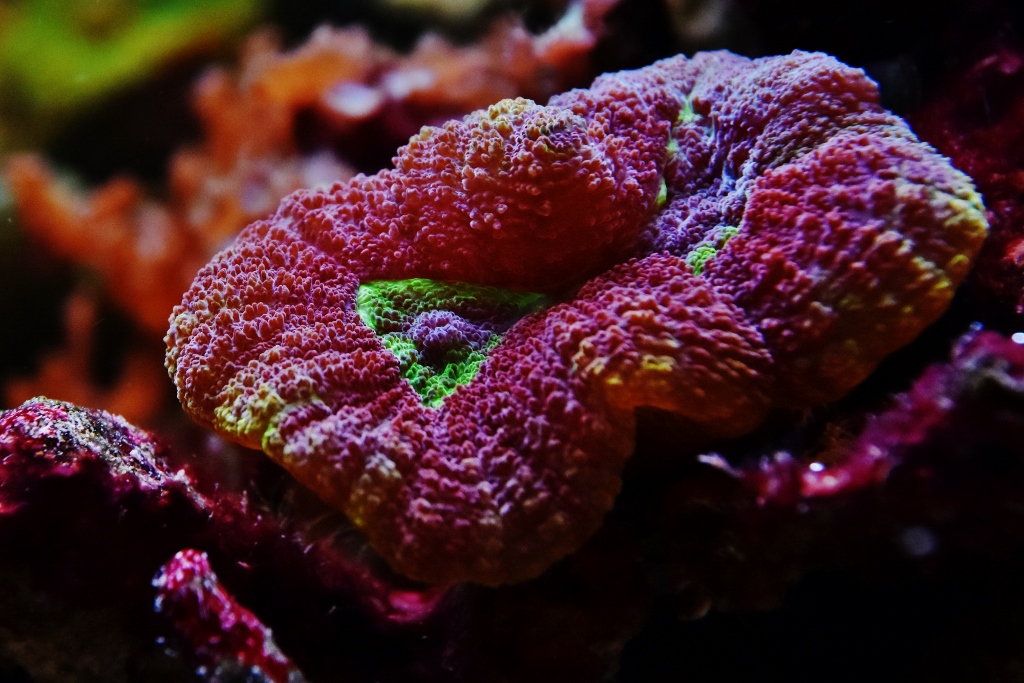 SashimiTurtle said:
Day 7 of Sushi tank... everyone still looks fine. Fish are active, no signs of stress and ammonia is staying at or below 0.25ppm. I've dosed prime a few times just to make sure everything was safe. The trachy roll has been a little upset, but it went from DIRTY poop water to squeaky clean... it needs some time to adjust.

Added a few more pieces of sushi to the tank... and took a few pictures of happy customers.

Rainbow BTA nigiri and Ricordea Florida and Yuma sashimi... colors aren't the best on the these three but they've been in the QT tank and under some stress moving around. No skeletons here so pretty much no risk of transferring any nasties. Just making sure we only serve the freshest sushi to our customers.

One of two Money Cowrie. I moved these guys over when I added the fish. They cover their entire shells with their mantle and do not get any algae growth. They sort of make their own "seaweed" camouflage.

Sushi customers! All of these guys have been repeat customers for a long time. The clowns were my first customers ever! 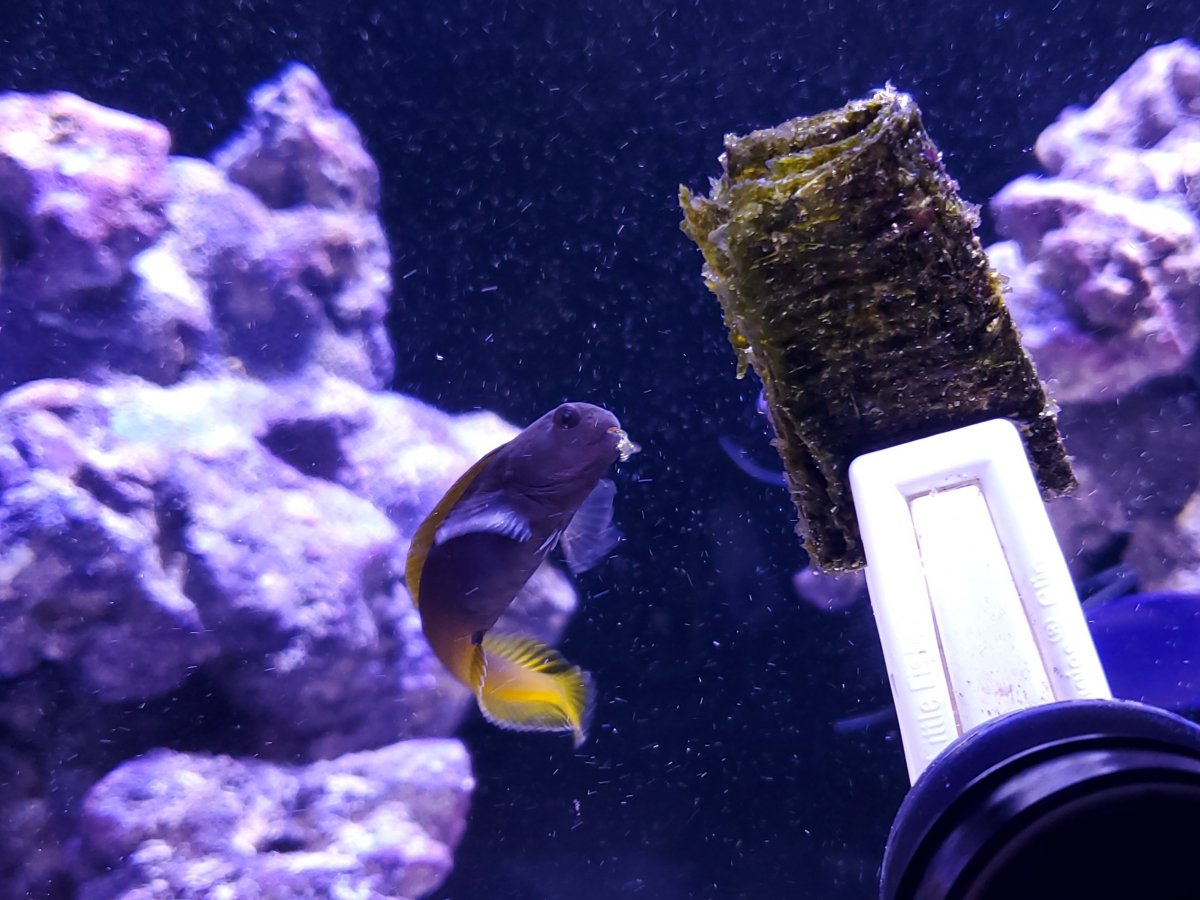 Added some more sushi to the tank. Sadly, this is the last of the sushi that will make it out of QT. The rest is either dead or to far gone to be worth saving. We will just have to order more sushi!

Green and purple blastos, these guys looked good the whole time, there was an aiptasia or two I had to get rid of on the under side. I just clipped the skeleton where they were and dipped a few times while in QT.

Orange skirt green mouth RFA, mouth is slowly closing up in the clean tank. It was turned pretty far inside out.

Orange purple lobo... really bad shape but it's coming back, might take it a while to grow back where it receded so far but it looks healthy. Color is really dark as well.

Sushi bar got new lights! The old one was cheap and not very effective at showing off how appetizing our sushi is. 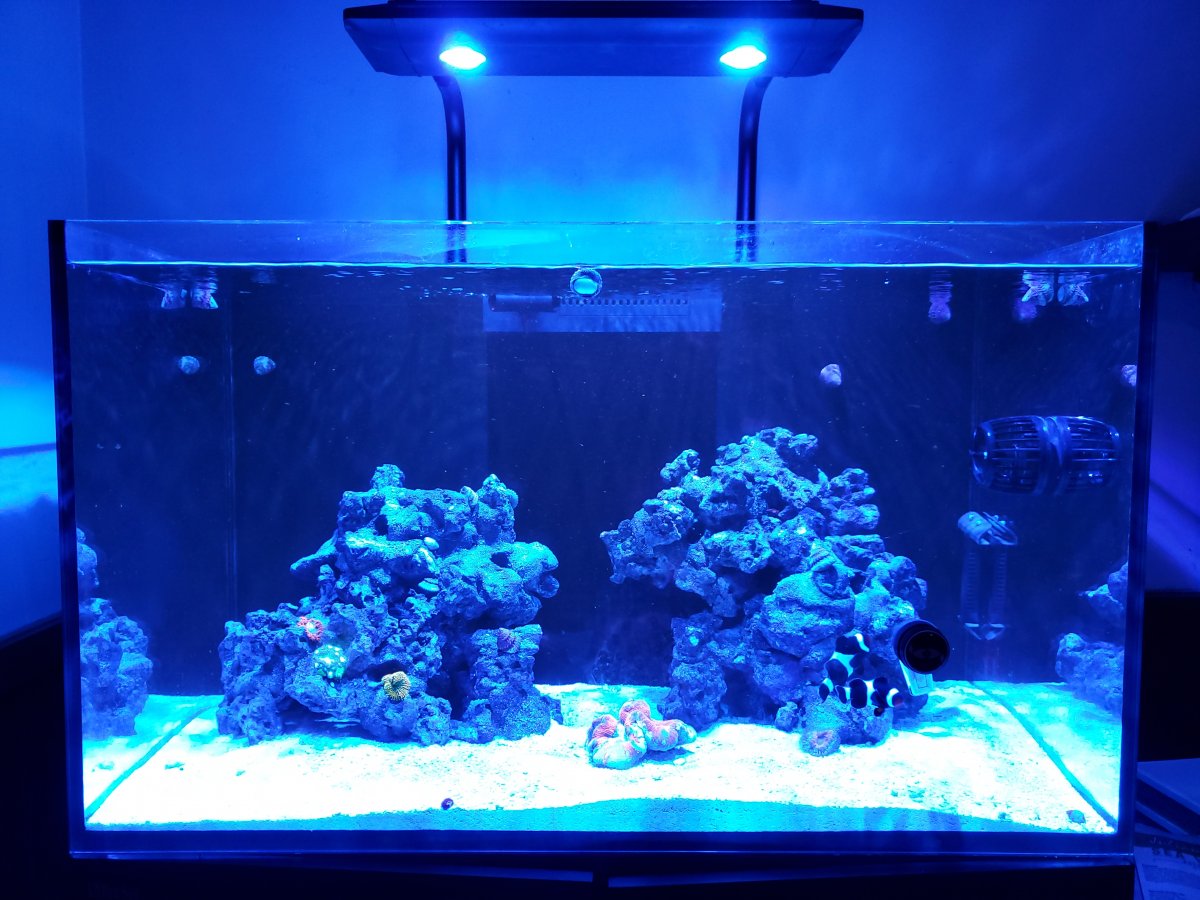 (It's not really new, I just got new mounts for it.)

What in the world?!?! Please ID

Check out this EEL I caught in the Gulf of Mexico!