Viparspectra 165watt, Anyone using these?

ph123uk said:
Mines now running with NO lenses at all, much better blending and less shadowing, because of this ive had to increase the intensity - I have also installed a reef-pi setup inside the light fixture itself so mine now is controllable and dims. 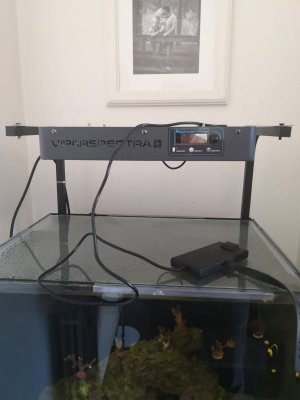 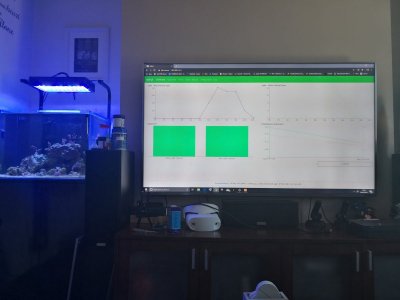 Nice little set up you have there.

ph123uk said:
Mines now running with NO lenses at all, much better blending and less shadowing, because of this ive had to increase the intensity - I have also installed a reef-pi setup inside the light fixture itself so mine now is controllable and dims.

Hi with the reef pi installed does that just let you ramp up and down as per the screen on your computer or can it do other things?

It just lets me ramp up and down from 0-100% - sounds simple but it has made a massive difference - I can now extend my lighting period as the lights aren't always on "full blast" at their peak intensities - the fish like it as its not just auto on at 50%, its gradual - and my corals are responding very well.
OP

Sounds like a great mod. I'm still struggling with mine at the moment I'm at 35blue and 2 white and slowly going back up as I had the red digi just stn and had an issue with nitrates and phosphate which caused cyano which didn't help.
Alk is 8.3
Mag is 1350
Cal 460
nitrate 5-10
Things are opening up fine my frogspawn is getting some colour finally (shades of anyway) my yellow hammer just looks peed off but green and ultra are fine and torch is good. Acans look blah and have been that way for a few months. It's just becoming a chore at the moment not enjoyment. I'll post an uptown date photo later.
I've even checked for stray voltage which I found was on my skimmer that I took out 6 months ago so ????

Yea, it is, means they are only getting full blast for 4-6 hours! But seem to be responding VERY well - will get some current pics at some point! 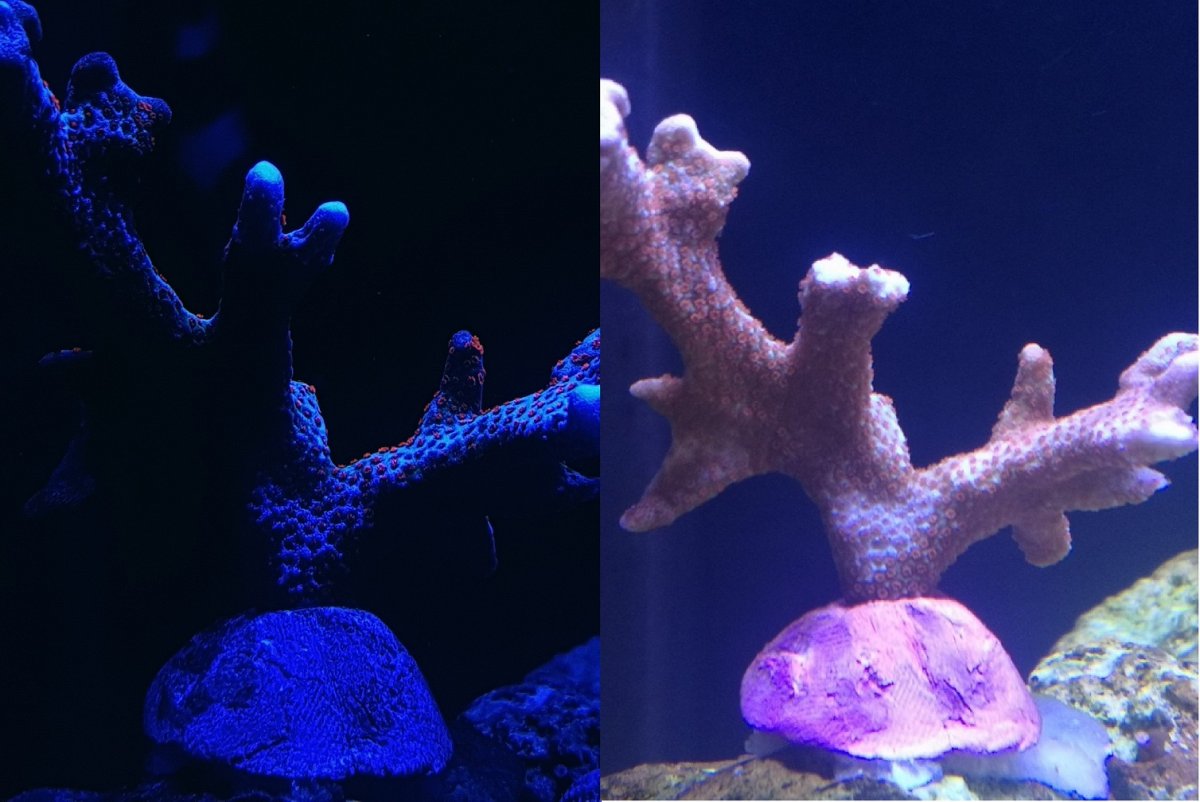 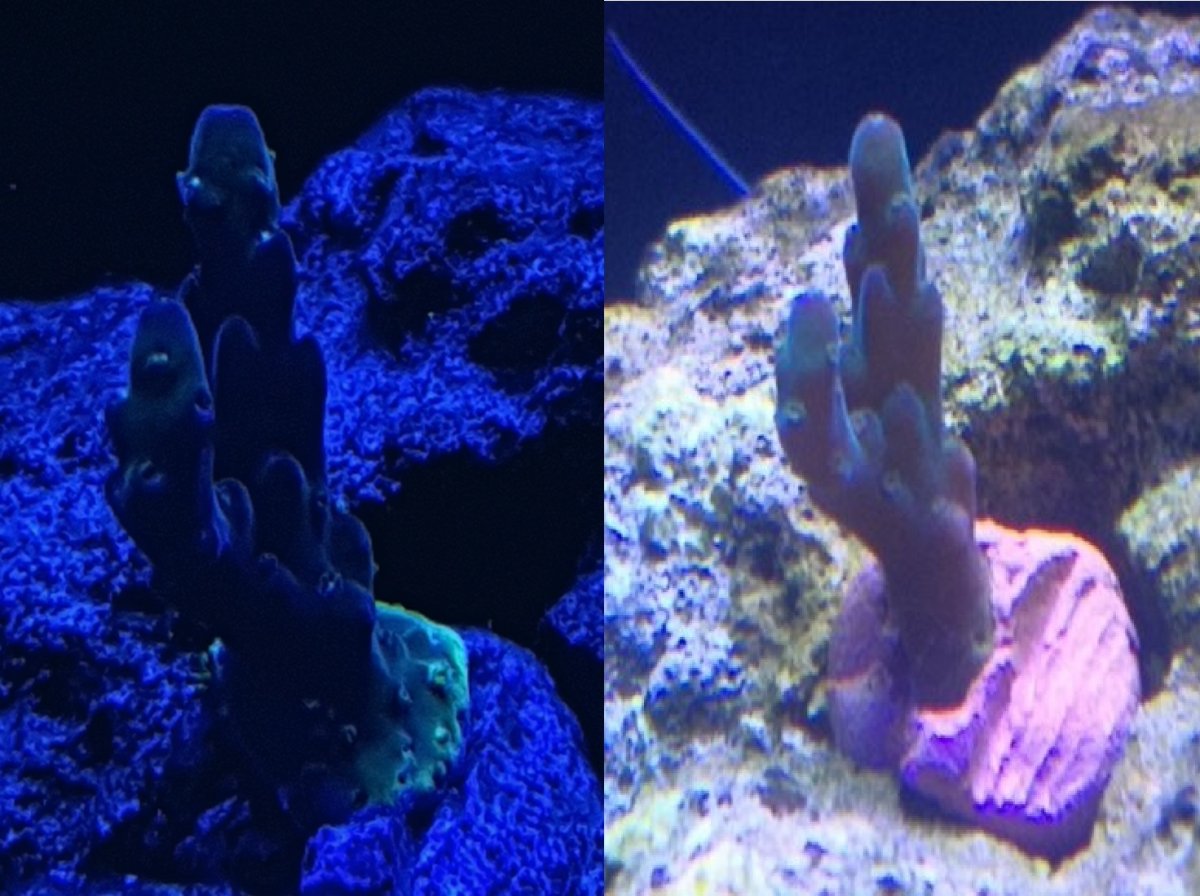 I still have algae on the sand which I think is down to some of my nassarius snails dying under the sand and not being able to see them as their in the sand.
OP

Hi all just a quick update, the light is still working flawlessly but there is bad news in my tank.
I have been having issues with my sps fading then due to a muck up i added my water change water at a too lower temp about 3 weeks ago and that finished off my red digi and severely annoyed my other digi which was fading somewhat anyway. Most of that had RTN'd now, after trying to keep every stable as best as I can
All parameters have been stable for the ages so the only thing I could put it down to was the temp swing from the water change.
Alk 8-8.3
Calcium 450
Mag 1350
Nitrate 5-10 has been this for nearly 2 years.
Phos 0.06 (friends hanna)

So tonight I thought I would do a very slight rescape and get rid of the dead skeletons and put back in some other euphillias from my bedroom nem tank. The photo is literally just after I put them back in so all closed up i will do another photo tomorrow when all settled. I just wish i never did sps at all as I do prefer lps for movement. They were all cheap frags anyway I'm just glad I hadn't forked out 100s on a high end coral and it rtn after 1.5 years of growth.

Thanks for keeping us updated on everything, Nicholas. I’ve had these lights for a long time and I sometimes feel like they can burn coral underneath them. I have a Hollywood stunner chalice that I cannot color up, it’s just really brown.

Also not greatly pleased with the spectrum, the blue channel is far too blue, but when the whites come on the color washes out and I lose a lot of the pop from the color. I run mine about 10 inches off the top of the water, currently at 55 blue and 1 white.

Well I was thinking the same thing. 1 minute the colour looks great then next I'm not liking it and was contemplating changing some diodes then I decided that when I next took it apart to clean it I might take the lenses off to get better colour blending. Mine is only 9 inches above the water so I do get some hot points with regarding light penetration. But the downside of removing the lenses you lose par about 20-25% so technically you can run them a little higher. There is a par chart on r2r where someone has tested the light as is at 100% on both channels over a 24 inch cube and the par is high in the bottom so they are strong enough.

I have removed the lenses now as of Saturday night this week and I admit the blending is better. This my tank after the rescape and settled slightly.

I took my lenses off as well about two weeks ago. I think I’m going to sit tight for a while and see how things play out.

If the only thing I have getting angry is a chalice (which is growing like crazy, just brown) then I guess I’m doing okay.
OP

What stipends are you running them at now and what where they before, or did you just take the lenses off?
OP

Also do you have a pic of the tank
OP

Also it only takes about 10 mins to put them back on if things aren't happy. Do you feel the colour blending is better?

How many of you are running with the lenses off of your viparspectras?

I pulled all the lenses on mine last sat. So I'm just sucking and seeing at the moment. As it a quick job to refit them so not worried.
OP

Another update. (not great)

I have now stopped dosing 2 part now as my tank was thriving using kalkwasser in my ato over a year and a half ago.
Consumption got too high (1.5dkh) per day and things were growing really, really well. So I went over to 2 part dosing on a doser and things just stayed put after a while and growth slowed down, so consumption dropped and I was always having to adjusting the doser to stop it raising levels and keep it stable at the level I run at which it was, I've kept all my test results since starting this tank so I know the levels and the dates etc. of when it was running at it's best so I've tried to keep it at those levels as consistent as i can for the time of running this tank and I have still had issues.
Things just stopped thriving and the sps had started to pale, then had a cyano outbreak which as the pic shows I still have. I have tried water changes with siphoning out as much as I could, red slime remover, 3 day blackout, it clears temporarily then comes back after a few weeks.

Sps started to slowly perish then stn so I removed all the red digi as that was first to go and didn't want die off to feed cyano, then green/silver digi browned out and one colony at a time the rtn finished them off. I have removed all traces of sps I can, apart from what has encrusted and still has polyps on it. Its disheartening to chuck all the dead skeletons away but they were all from a frag pack so not high end corals and only £25, of which I made more back from selling frags of them.
I've now moved some hammers back in to it from my other tanks to fill the gaps so it doesn't look as empty.

Now I have been racking my brain as to what the cause could be of losing the sps for ages now by searching this site and speaking to my lfs owner to no clear defining reason.

I am struggling to keep the love for this tank going and am at my wits end, so what to do next?

I have gone back through all my tests and
notes I have made over the last nearly 3 years for this tank, I found when i first had to start dosing 2 part manually on a daily basis which got annoying quickly, then I changed it to the kalkwasser in my ato and things took off, the plus being I didn't have to dose manually anymore.
Then things grew too fast and kalk didn't cut it so went doser route but looking back I wish I'd kept kalk going as well as I think that helped alot.

So going forward now I've actually gone backwards, I've got my main levels where I want them,
Alk 8.0
Calcium 440
Mag 1290
Ph 8
Temp 78.4
Nitrates 10
Phos 0.08
Now I have taken my doser off line and gone back to kalkwasser in my ato at a level of
1/2 tsp per gallon as per when I started to have good growth. Just to see if this can help or not as i can't think of anything else to try plus I have everything to hand so no more expense for a while. If it doesn't work I don't know what I'll try next? so for now I'll keep up with updates on it and post back on here if there are any noticable change.

This pic is from tonight for a comparison shot for later down the road I hope it goes well.

In this hobby things don't always go well and I thought I'd share the issues I'm having.

If you've read all this, thanks for taking the time.
J

I don’t have a great pic, but this is mine. Most of my corals are still smaller frags. I am running my lights at 60 blue, 1 white, at about 10” off the top of the water. I’m getting solid growth on SPS, less growth on LPS and softies (it’s pretty low nutrient, no algae issues no detectable N/P).

Thanks for keeping us updated. I do believe these lights are finicky because of how powerful they are. Not sure how they’d cause the SPS die off you had. Do you think the switch to 2-part from kalk would have done that?

Anyway, don’t give up, you still have a great looking tank and I’m sure you’ll learn what happened and how to prevent it in the future. 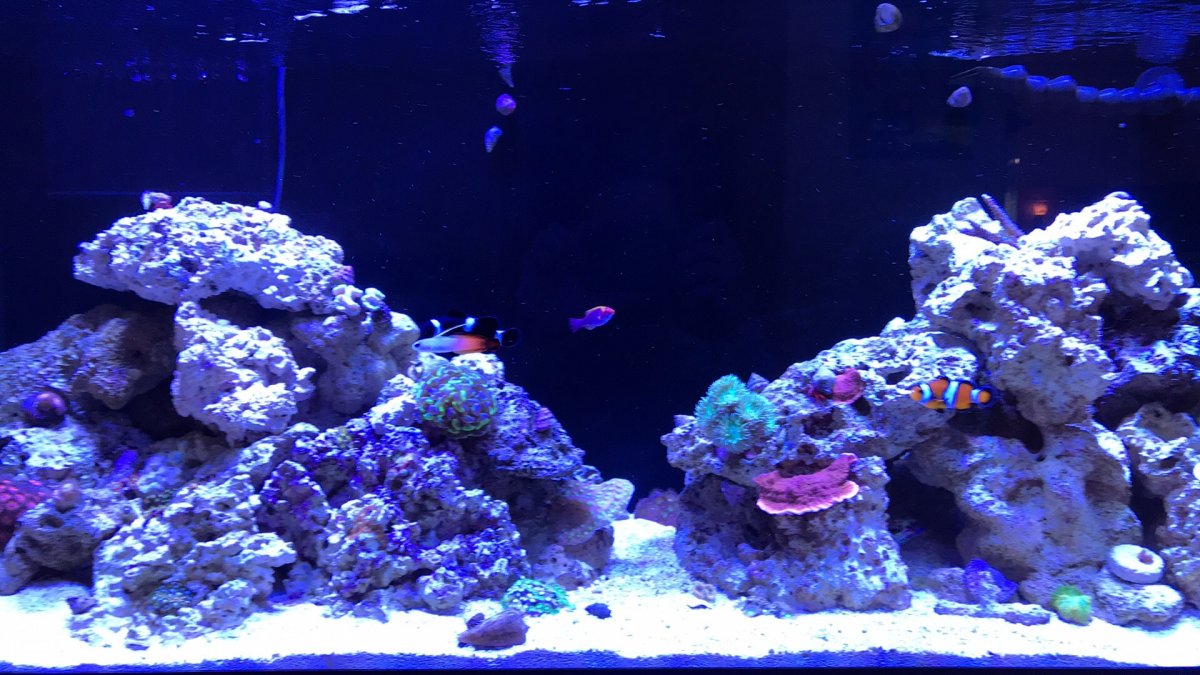