What are the completely "reef-safe" crabs? Are they even a thing?

The crabs I will be considering include the true crabs (Brachyura) and some "crabs" from Anomura, including hermit crabs (Paguroidea) and porcelain crabs (Porcellanidae). Horseshoe crabs (Limulidae) will be excluded.

Over the years, I have heard mixed reports on how "reef-safe" crabs are in the hobby, especially since many are opportunistic feeders, can walk over corals, and require snail shells (for hermit crabs), but there are a few that I have never heard any bad incidents from/seem to be widely considered to be safe in reef tanks. Here, I have compiled the "reef-safe" crabs I can recall. Does this list seem reasonable? Should more be added or are there no crabs that can truly be considered "reef-safe?" Please do share your experiences/thoughts.

Note: these are not crabs which I have kept (an emerald crab (Mithraculus sculptus) in an old tank that I never really paid attention to and zebra hermit crabs (Calcinus laevimanus) that seem to be aggressive to one another in the absence of established, algae-covered shells), so take the information I have provided with a grain of salt.

Porcelain crabs (Porcellanidae), filter feeders, the claws are not used to catch food, 1": 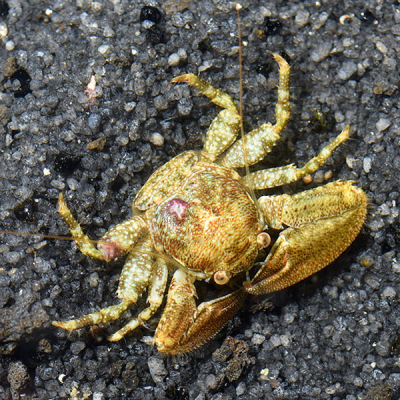 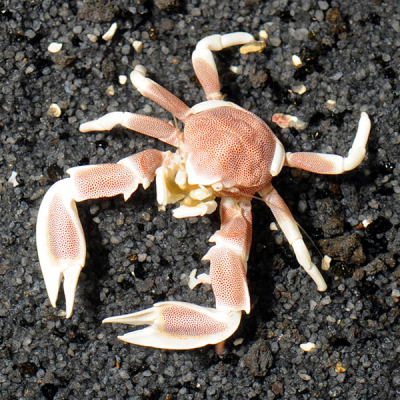 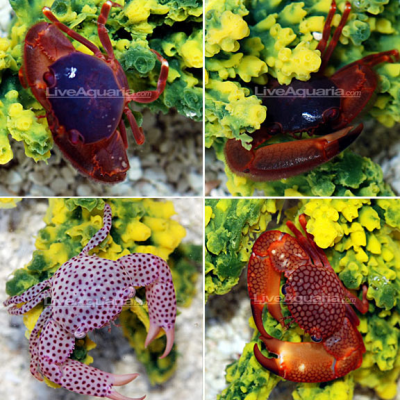 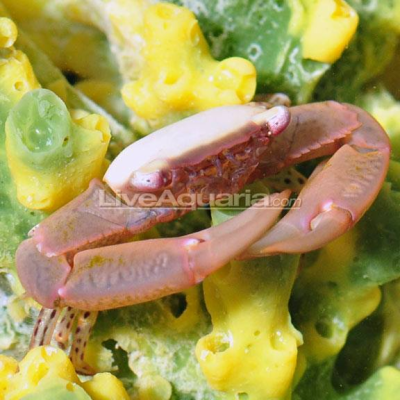 Pom pom crabs (Lybia sp.), carries anemones to deter predators and collect food, anemones may cause minimal damage to other corals that doesn't seem to be an issue, 1": 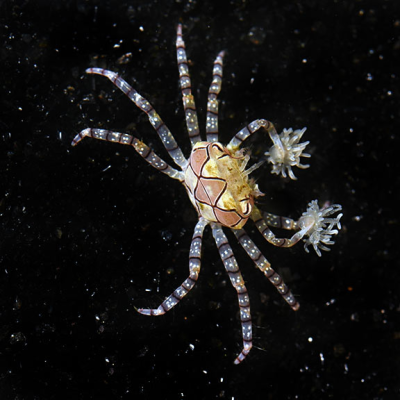 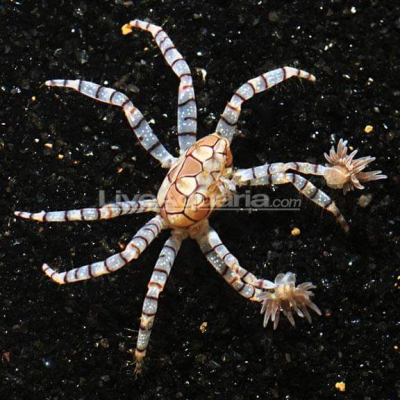 Micro decorator/mime crab (Acanthonyx, Epialtoides, and Epialtus sp.), I have heard these might wear small coral, but it doesn't seem to be an issue (maybe with a small frag though), 1": 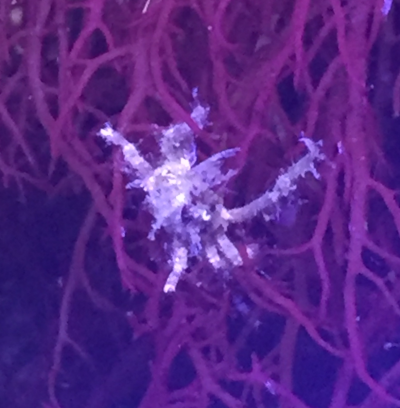 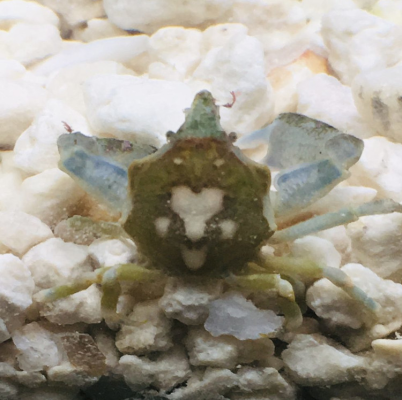 In my personal experience, pompom crabs have been nothing but a pleasure to have in my nano reef tank.

At worst they might run over a coral to get to some food but due to their size and "Lightfootedness" the coral is happy and open again in no time.

I have electric blue legged crabs, no issues at all…apart from them crawling over the corals.

Hermits are by default on the Bad list. They knock things over and hunt snails like they have a vendetta.

Pom Poms only figh each other when one looses an anemone. Which is hilarious to watch.

I had an emerald crab that ate my fireworks polyps so after that I decided no more crabs.

Thanks for the replies everyone! Looks like hermit crab reputation especially has mixed thoughts. I was originally considering adding the staghorn hermit crab to the list above, due to the lack of “incidents” with this crab, though this might be the result of its rarity in the trade. Besides, its shell presents quite a few complications that might not make it suitable for most reefs. 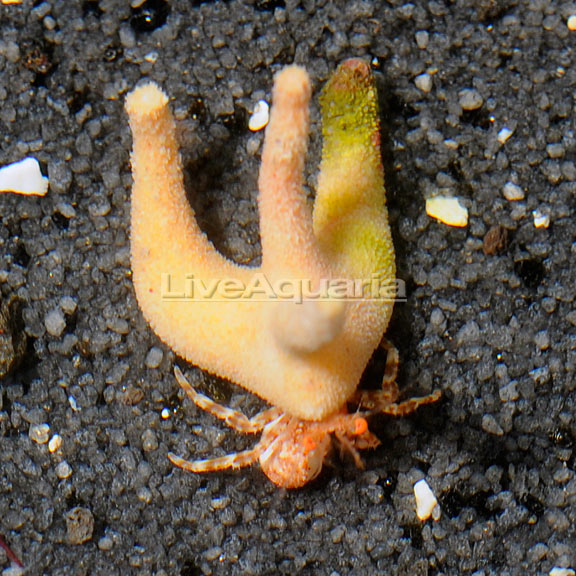 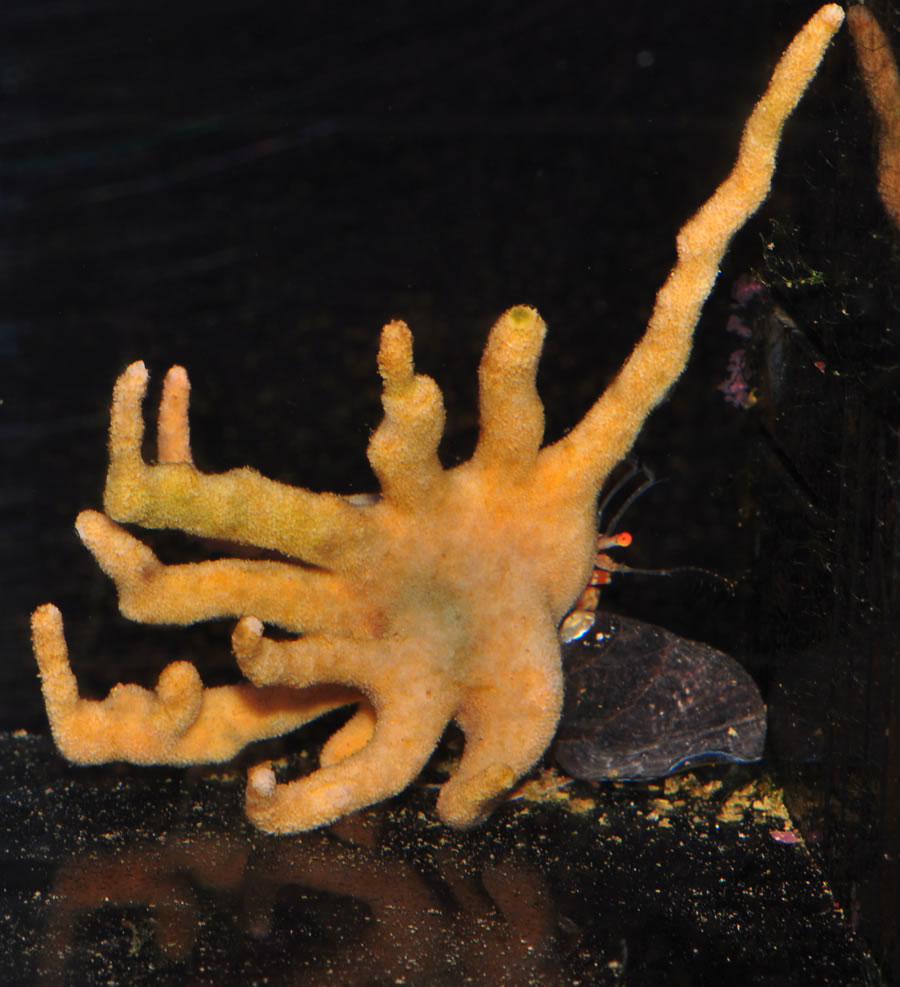 Did you provide the hermits with empty, “established” shells? They prefer these over sterile, newly added shells.
J

Enderg60 said:
Hermits are by default on the Bad list. They knock things over and hunt snails like they have a vendetta.

Pom Poms only figh each other when one looses an anemone. Which is hilarious to watch.
Click to expand...

James5214 said:
Funny you say that if I don't feed my tank some extra stuff I have found my blue legged crabs destroying my snails smh
Click to expand...

Na I used to work at a LFS, so when I say things like " Ive never heard anyone say" I mean in my years of working with many people daily. Crabs decide what shells are suitable for an upgrade. The fact you provided a few selections doesnt mean he will choose them over the snails shell. Sometimes they just want the meat. And in response to "well if you fed them enough"...you arnt supposed to feed a clean up crew. If you do they wont clean up.

After selling every crab mentioned here hundreds of times over you start to see trends.

Things like, 95% of the time someone blames a crab(or anything) for eating a fish. The fish was already dead. Exceptions exist, like arrow crabs. Those jerks will spear a fish like its sport. But hermit crabs not being worth it is on that list of trends I stand by.

Side note: dont buy staghorn hermits. The coral always dies and the crab usually ends up in a snail shell because its way easier to carry.

Crabs are the popular scapegoat in the hobby. They get blamed for absolutely anything and everything
OP

I also randomly remembered this video of a blue crab (Callinectes sapidus) that was found without claws in the wild. While I do not endorse pulling the claws off an aquarium crab, which could stress and kill the crab or simply grow back after several molts, it is interesting to consider if limiting a crab's feeding capabilities to its mandibles (feeding appendages in the mouth) would make it safer for a reef tank:

No problems with red blue claw crabs. Emeralds. Sally light foots. Hermits. Blue knuckle and Halloweens.
Yes hermit crabs will eat and kill ur snails and take their shells for themselves.
D

Enderg60 said:
Hermits are by default on the Bad list. They knock things over and hunt snails like they have a vendetta.

Pom Poms only figh each other when one looses an anemone. Which is hilarious to watch.
Click to expand...

Emerald crabs are great. They just need to either have enough algae to keep them fed, or get some nori, and they stay reef safe.

Anemone_Fanatic said:
Emerald crabs are great. They just need to either have enough algae to keep them fed, or get some nori, and they stay reef safe.
Click to expand...

I’ve had an Emerald Crab cause hundreds of dollars in damage in just the couple of nights it took to catch him. He ripped the face off of a large lobo the first night which ended up killing it. I lost a few more LPS corals before i finally caught him ripping apart an acan echinata in the middle of the night. It took just a few days but in that time he caused a ton of damage. I don’t believe they actually eat coral but they will tear them up to get to the food inside and this was when i had more than enough algae for him to eat in the tank. I’ll never keep an emerald crab again.

hermits haven’t been a problem for me aside from an orange stripe hermit that got too big and started ripping up some coral. The blue legs and scarlet reef hermits have been model citizens so far for me.
OP

I also forgot to add these guys: 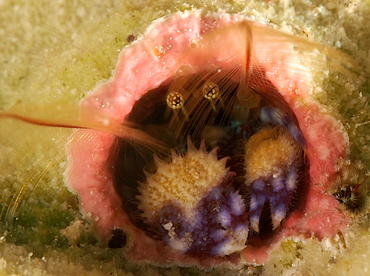 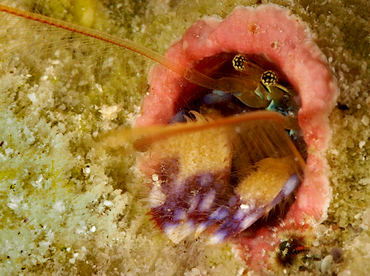 I had a rogue pom pom crab that would try and attack my candy cane pistol and I remember someone posted they witnessed their tailspot get stung by a pom pom crab.

I think often they are fine though.

Anemone_Fanatic said:
Emerald crabs are great. They just need to either have enough algae to keep them fed, or get some nori, and they stay reef safe.
Click to expand...

Cool! Feeding kind of defeats the purpose of including it in a clean up crew, but I would be perfectly fine with feeding them if I had a reef tank (my macroalgae eliminates it from my setup).
Side note: I have heard that female emerald crabs are less aggressive than males which may be a factor in the mixed reception.

Are these the Atlantic blue crabs (Callinectes sapidus)? With claws, they seem pretty intimidating, personally.

Nope. That looks more like a swimming crab or a Coldwater species.