I thought id open this thread on the off chance that someone else may have experienced something similar to what I am experiencing, if so, I would really like people to share their stories/thoughts.

I have had my yellow watchman goby for a couple of years, his name is grumpy (obvious name choice) and I think he's a bit "different" shall we say. At first I purchased him a pistol shrimp buddy and they paired up almost instantly, however, the pistol shrimp soon found out that grumpy was "special" and was not the most reliable housemate so grumpy was soon abandoned... I found this funny as a blind, vulnerable pistol shrimp concluded that he/she was better off alone than with grumpy - since then they have both lived solitary lives in one of my tanks.

Recently, I added another inch or so to my sandbed and thought id add a golden headed sleeper goby aka blue stripe goby to the tank so he/she could stir up the sand and add a different type of character to the tank..

At first the sleeper goby was very shy, which I know is very common with this type of goby..eventually after a few days of coming out only at night he/she realised all was OK in their new home and ventured out more openly. Getting straight to the main point, I am not sure what is going on but the YWM goby seems to have now paired up with the sleeper goby and grumpy has moved the sleeper goby into his cave. Normally grumpy is true to his name and pathetically attempts to scare any innocent passers by with his angry body shakes and open mouth but these two literally have become inseparable and I can not find any info about this online. Are these two breeds normally compatible? are they lovers? what is going on?

I have attached a very bad quality picture just to give people an idea of what is going on - as some of you will already know, the sleeper goby can be quite shy when you walk past the tank so this was a zoomed in snapshot from behind the sofa. I'm sure I can get clearer examples if anyone is interested in seeing more.

Any thoughts or personal experiences with similar stories would be much appreciated - I am always happy to learn. 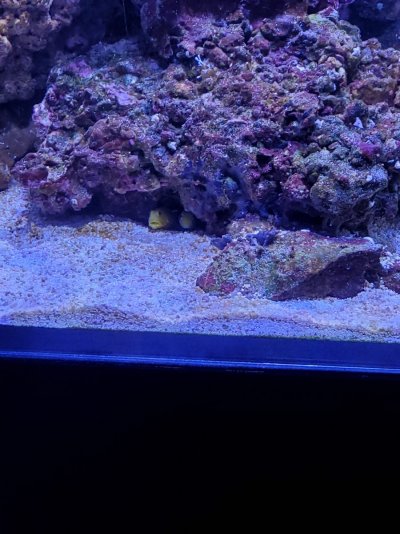 This is actually really cool. I would have thought they would compete with each other, both being bottom dwellers, in the same class, and similarly shaped, but this is kind of cool.
OP
M

reef_ninja said:
This is actually really cool. I would have thought they would compete with each other, both being bottom dwellers, in the same class, and similarly shaped, but this is kind of cool.
Click to expand...

I am always happy to learn as this may be more common than I think it is but I can't find anything online at all. It's fascinating to watch them follow eachother around but is this an anomaly!?