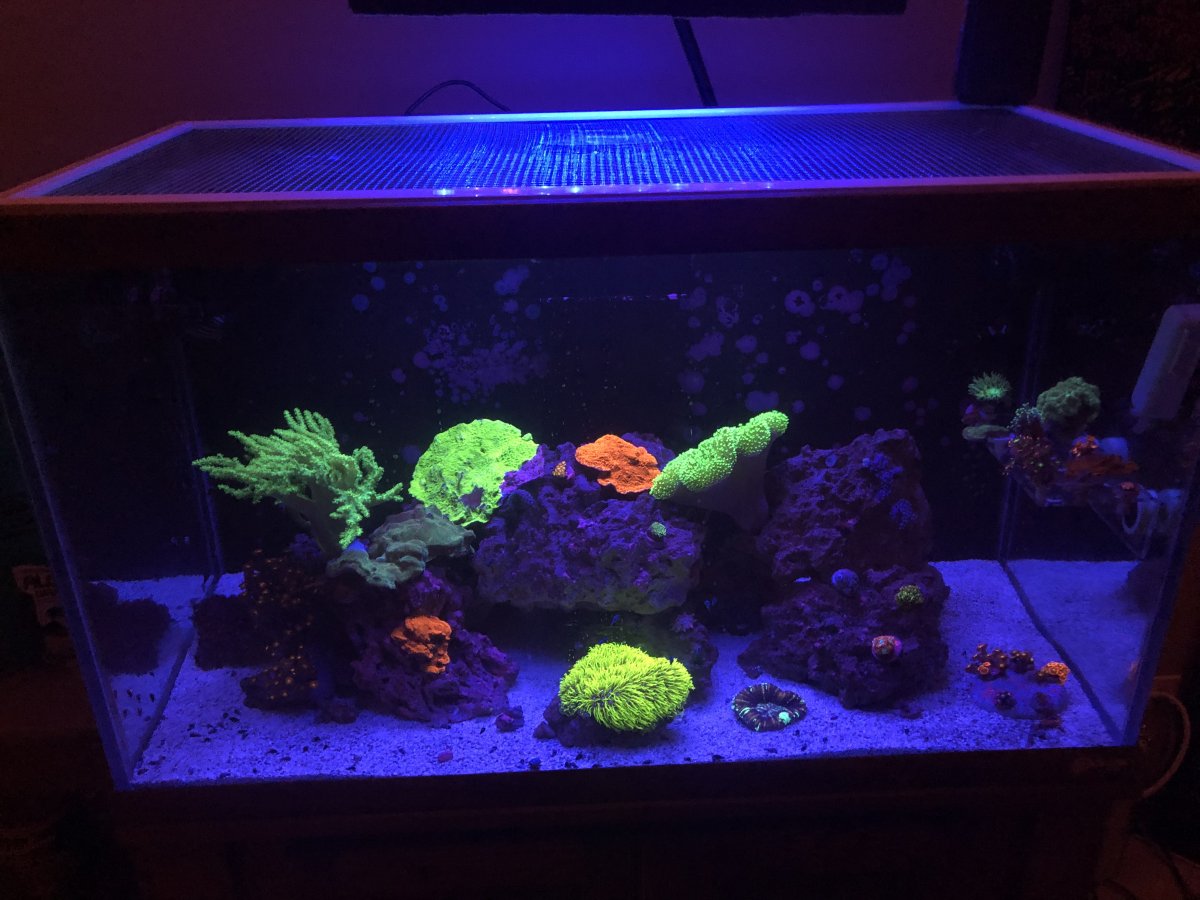 Greetings everyone. I am starting a new Build and wanted to create a thread and track the progress this time around.
I have had a Oceanic 56g RR in the past, a 75g drilled out by Rod's Reef, now Rod's food, and have grown up having tanks, fresh and salt, since I was 5 years old.
I will be plumbing and filling my tank today/tonight, so this is the ideal time to start my thread.
Heading out to HomeDepot to purchase some PVC and unions for this build after I hit submit.
Photos with progress will follow.

Thank you everyone who clicks, I hope to keep this as a build/log of my tank as many others here have.
Last edited: Aug 6, 2020

so what are your plans for this 65g?

a slim back-mounted overflow? Or the traditional bottom drilled overflow?

Ok, so I need to update this due to a few reasons:
1. My daughter Broke her arm the day before I posted but we did not know until Saturday afternoon.
2. After doctors visit and casting her arm up, life happens, daddy takes care of his babies before building the tank.
3. 2 days later, brakes went out on an ancient car I have been trying to keep running for 200K miles, it needed new rear brakes and a new brake line.... good old Salt on winter roads eat 20 year old brake lines. After 2 nights under it to replace rusted parts, it worked well again.
4. Car above died on the wife commute to work a week later. She said enough is enough and we bought a new car last Saturday.

Now, as far as the tank goes and how I got back into reefing:
I have been talking to my little ones for about 6 months about missing reef, dart frog and water dragon tanks. Lucky me, I found this tank in my local Craigslist, and it came with a custom Oak stand. I saw it and emailed about 12 mintues after they posted. I went the next day after work and picked it up.
It is a 65g Oceanic tank, I am very familiar with this size due to the 56g RR I used to have. But in the 10 yesars since I have been away, lighting has completely changed. I am thinking of starting with T5, and then later add LED for a hybrid... but I am open to any ideas.
I purchased 2 bags of reef grade live sand, and a Jebao DCQ-8000 for my return. I have HW-Marinemix salt for when I fill up the tank, most likely this coming weekend.
I have ordered all of the components, except for lights, and they are all in.
Unions, green PVC schedule 40 pipe to show which pipe in the back will be the full siphon for the herbie method I will run this go around. I have a few feet of silicone 1" pipe to help reduce the (if any at all) vibration from the DC pump.

Tomorrow I will be adding a single pane of 1/4" glass in to the 20g long sump. I will be doing this so that I can move anything around in the small sump, and it will give me a stable level in the return chamber to allow for a later ATO.
I have a Reef Creators overflow that I have installed, the 1200GPH box, 2 1" bulkheads. I drilled the tank a few weeks ago myself, along with pressure washing the reefsaver rock I received from Florida via Amazon.
So for now, I have a tank drilled, a sump in the stand and the glass I cut this morning. I also removed the sharp edges with my dremel and a diamond bit to make sure I don't go to the ER.

The reason I am updating tonight, and took tomorrow off of work is because I won a huge gift from Zoanthids.com. I need to get up and running and cycled sooner than I was slowly working up to. My previous goal was to be cycled by my birthday in October and later in the month at Chicago's Reefapalooza.

I will add many pictures of my build and read your replies, and your comments on what to do better. I would like to have another 10 year old Reef along with other animals/amphibians.
J

Welcome back to reefing!
OP 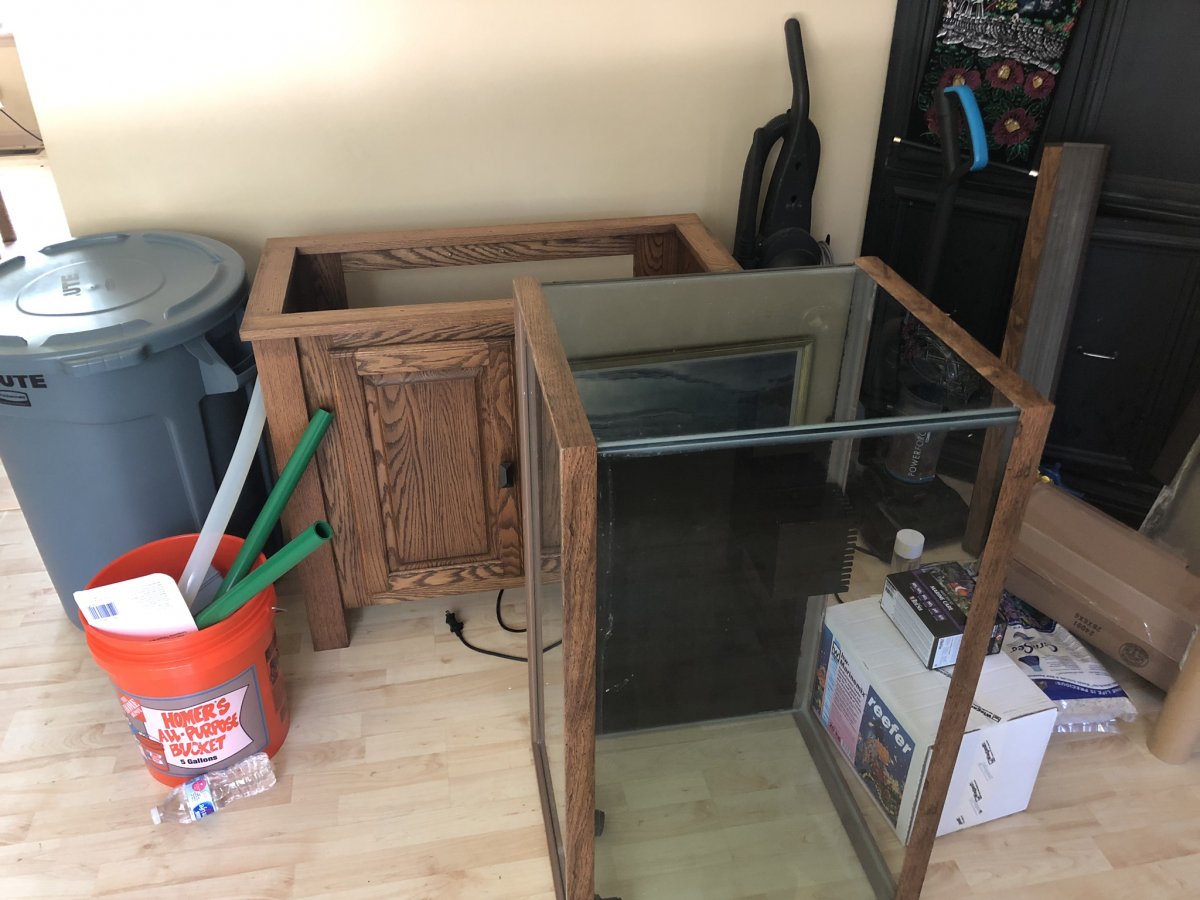 Started here, with all items in the front room.

First up, siliconed the sump divider for the pump in: 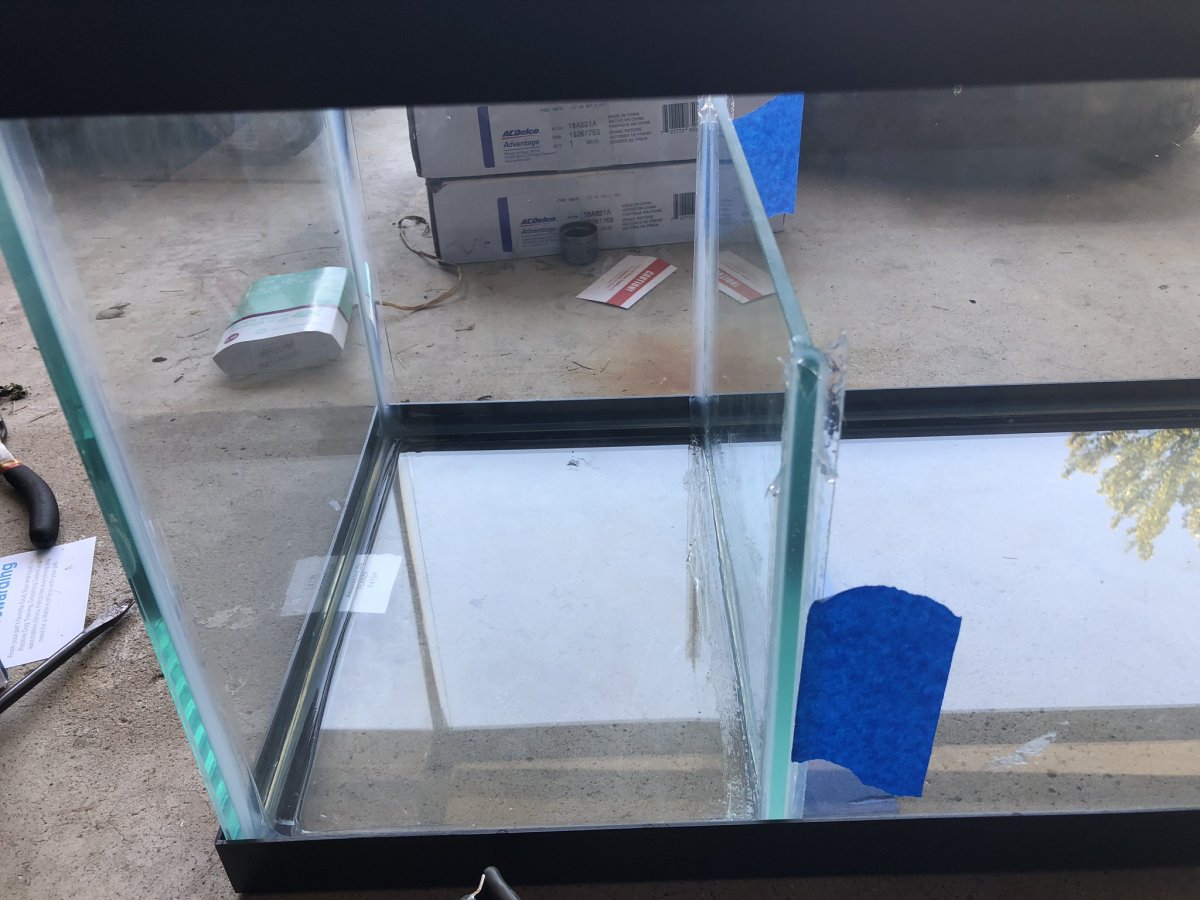 The other day, I had drilled and installed the overflow mentioned in my above post: 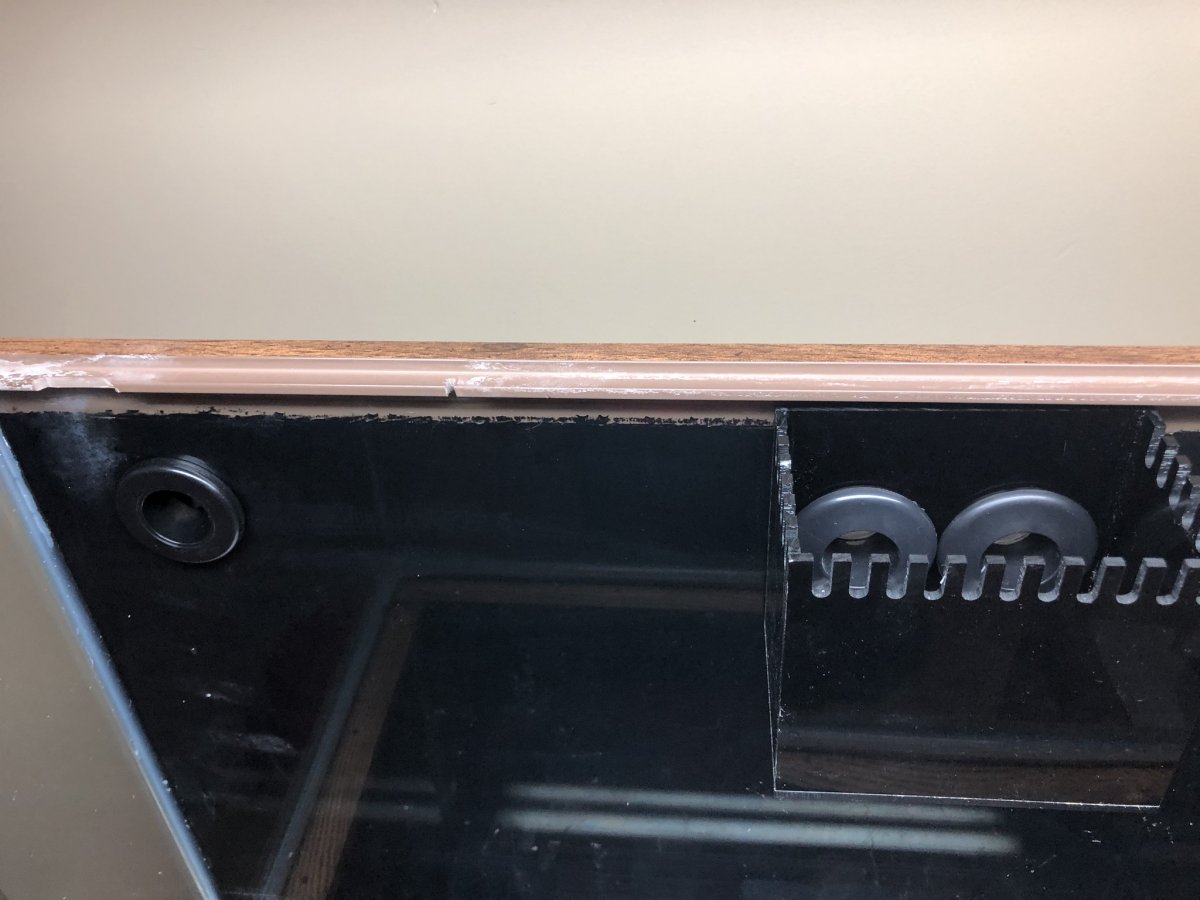 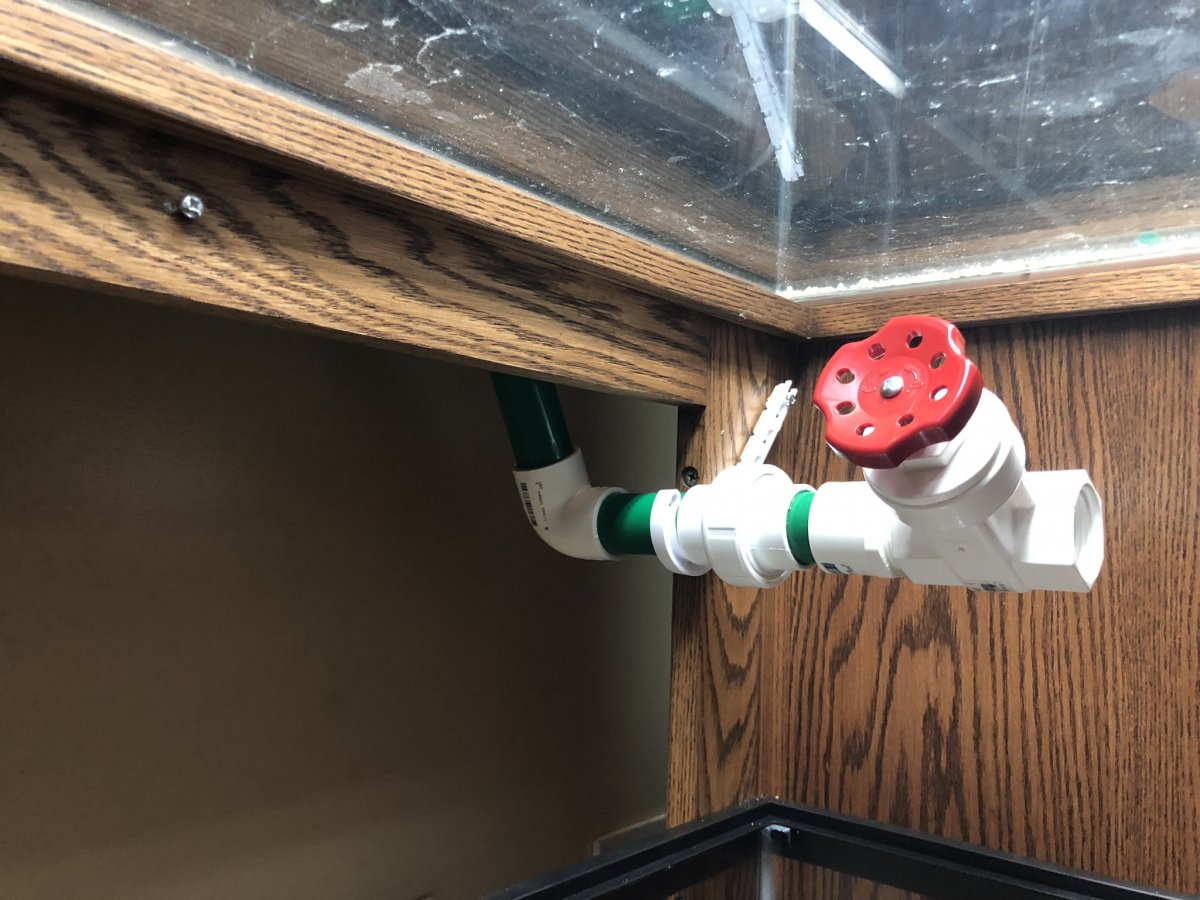 Herbie gate valve plumbed into the right most bulkhead in above picture. I chose to use the green schedule 40 from BRS for me to know which is the critical return. All other plumbing, for now, is white schedule 40 pvc. 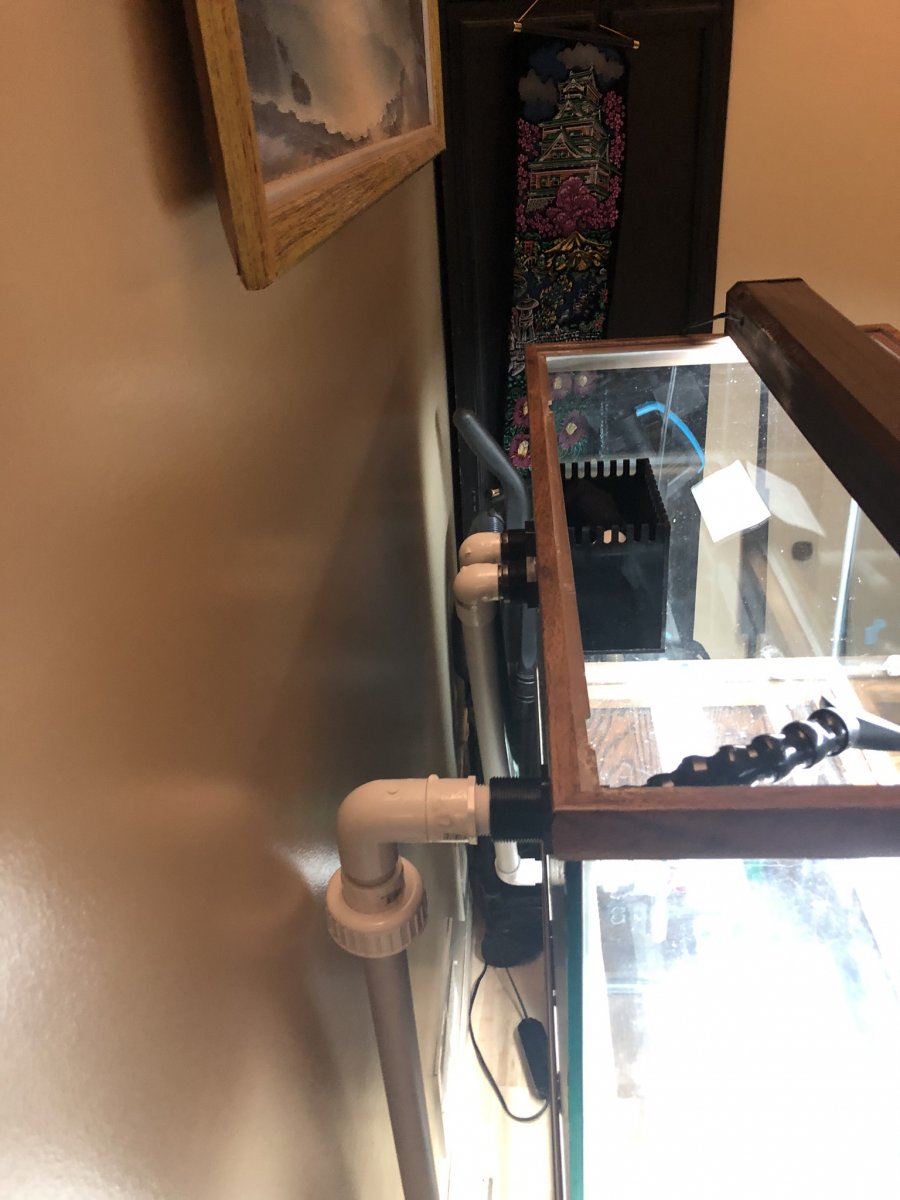 Here is the sump view: The return on the left, the stub out is for my later addition of a valve for dosing/reactor/ATS 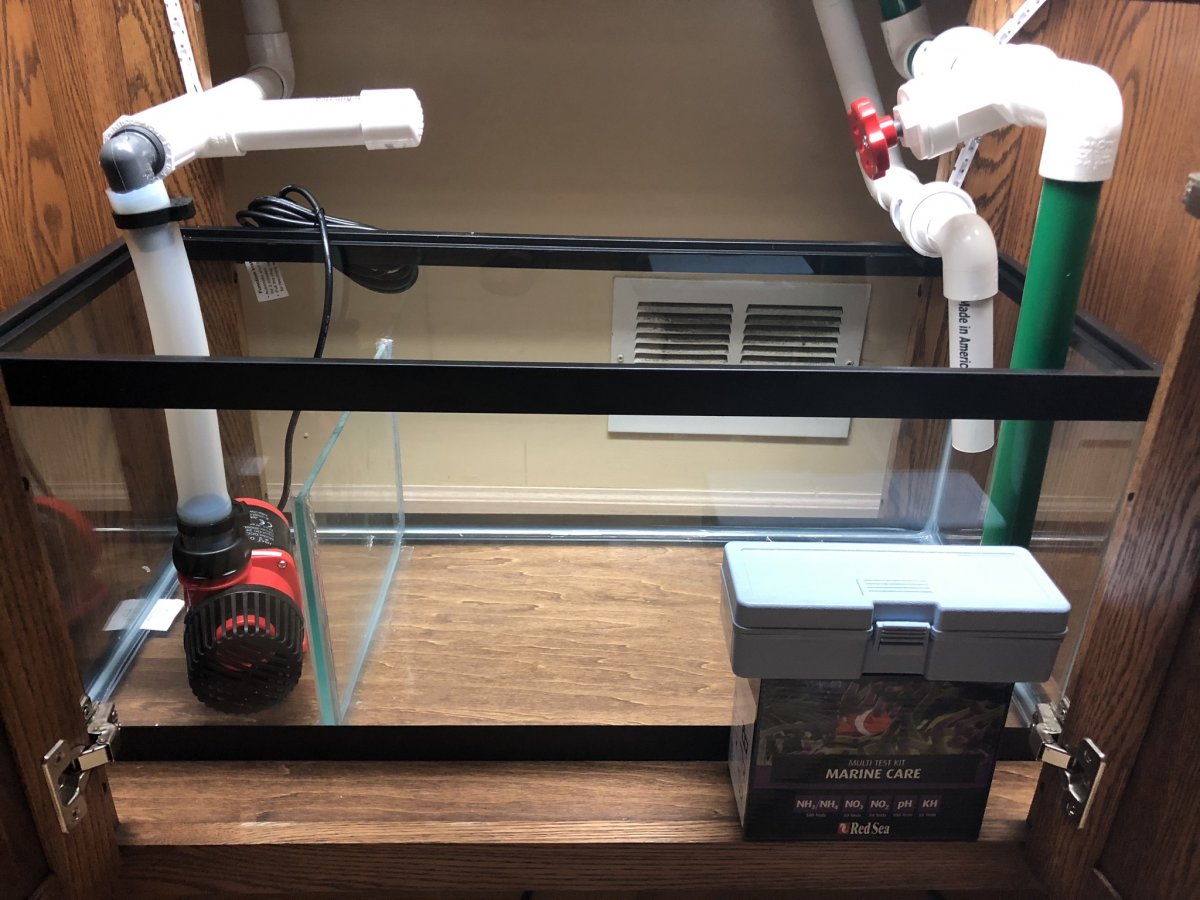 Here is the full tank shot, a few minutes ago: 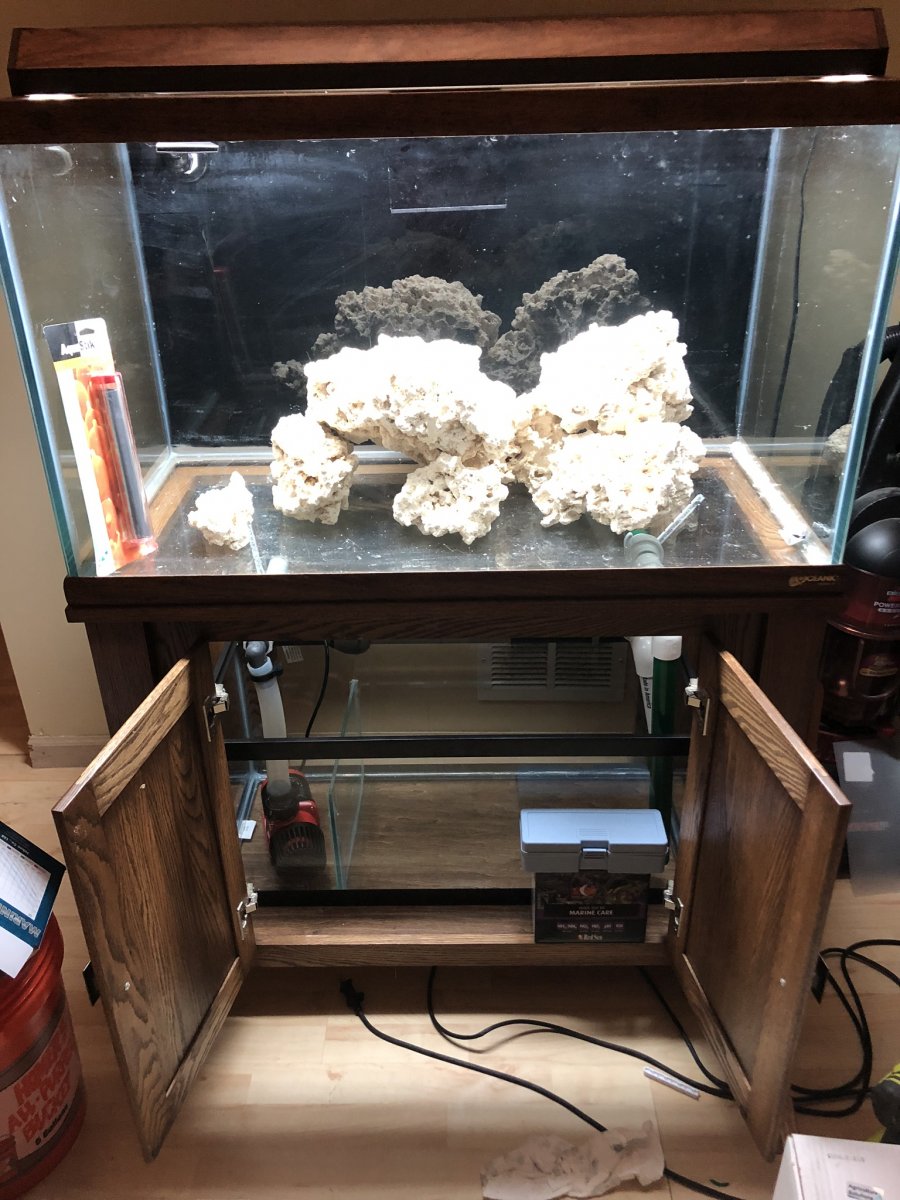 Looking good!! I hear those oceanic tanks are great! Nice scape too

Semper Fi,
I started reefing again after a long break as well. Somethings stay the same but there’s a whole lot to learn! I feel like we knew 1/10 th of what we hv to know now, but then again we had 8 corals to choose fm. Right!?
OP

Semper Fidelis.
So, I need to get a better RO/DI unit for next full fill up... 75gpd and it’s almost done. About 10-15 more gallons for the sump need to be filled. At least it is made and waiting in the brute until I return home tonight. The. I will turn on the pump for the wet down and once confirmed no leaks, add the salt. Soo close

What kind of coral are you planning?
OP

I am planning on a mixed reef. More movement in this tank than my sps dominated tank I used to have.
My kiddos want pulsing Xenia.... so obviously a stem or 3 of it. Zoos and depending what happens, maybe some shrooms or acans... just going to mix it up. Really let the kids get into it. So if they want Xenia and GSP, I will grow it. The only coral I have seen and want in a bad way is WWC Looney Tunes Stylo

Looney Tunes, it's FOR the kids...lol.

Urtoo said:
I am planning on a mixed reef. More movement in this tank than my sps dominated tank I used to have.
My kiddos want pulsing Xenia.... so obviously a stem or 3 of it. Zoos and depending what happens, maybe some shrooms or acans... just going to mix it up. Really let the kids get into it. So if they want Xenia and GSP, I will grow it. The only coral I have seen and want in a bad way is WWC Looney Tunes Stylo
Click to expand...

Welcome to R2R! Nice setup. I am sure the kids will be fragging corals in no time.
OP 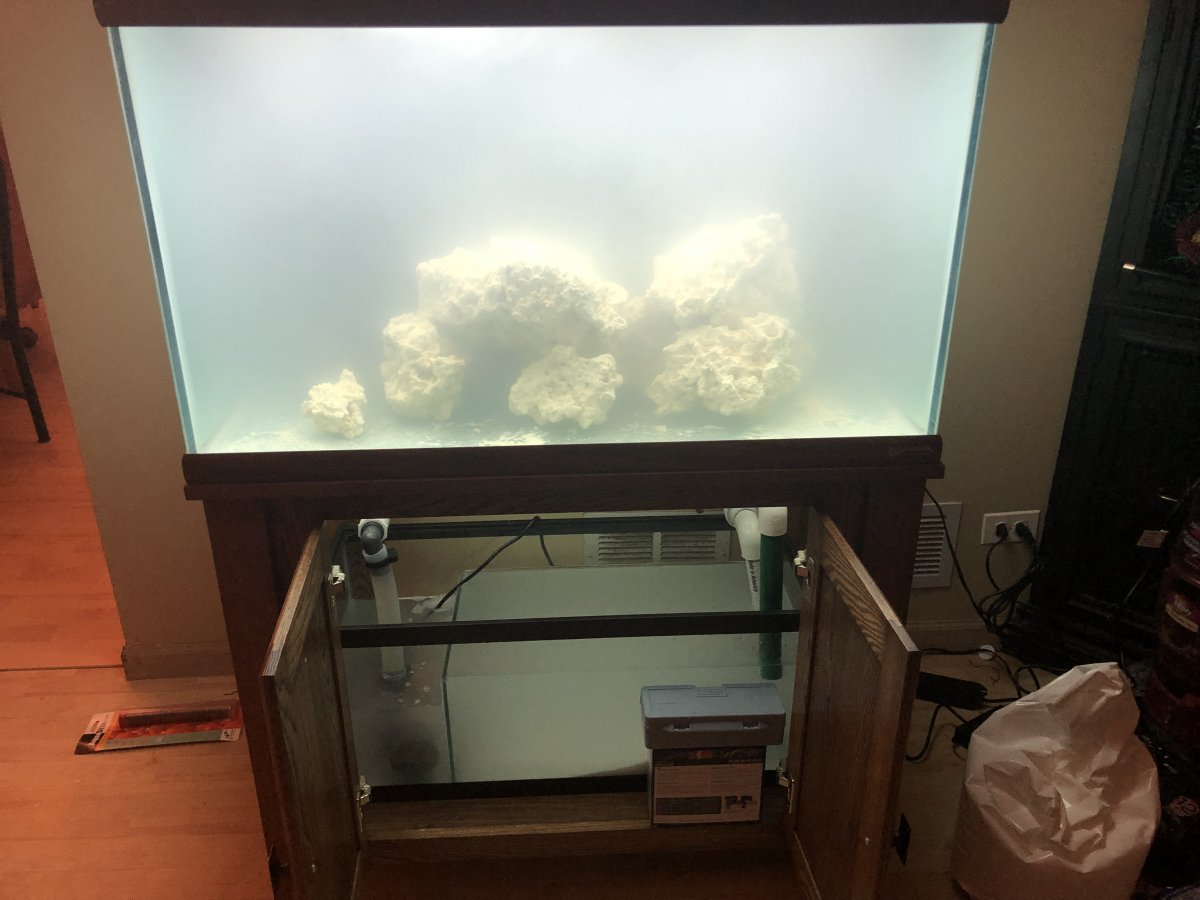 Added salt, 35 cups of HW-Marinemix. Pumps running and waiting overnight to see what the beginning sg is. 1.026 is my aim.
OP

Got up this morning, had my cuppa joe, calibrated the refractometer and tested the water overnight. 1.026, very nice.
Just for giggles, I got my hygrometer from my beer kit and floated it, yep, again, 1.026. I was super happy, and logged in to do my daily work.
About an hour ago, the VPN for work died. The network guys are working on it, and I am working on my tank.

During the work outage, added my 2 bags of live sand, and the Dr Tims to start a proper cycle.
Here it is, about 45 minutes after adding the sand.
The bag had a packet of clarifier, so I searched it online, and it said not an issue for a reef. Just added that, going to mow the lawn and see if it clears within the hour.
So stoked to see the tank full and started the cycle... almost a proper reef 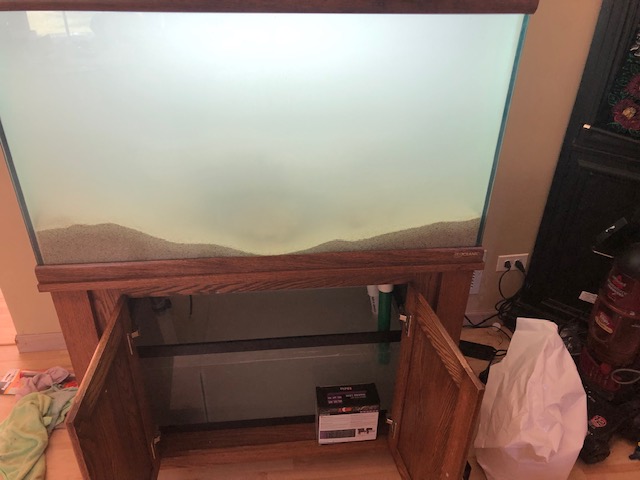 So, I checked my tank parameters on Friday morning, here they are: 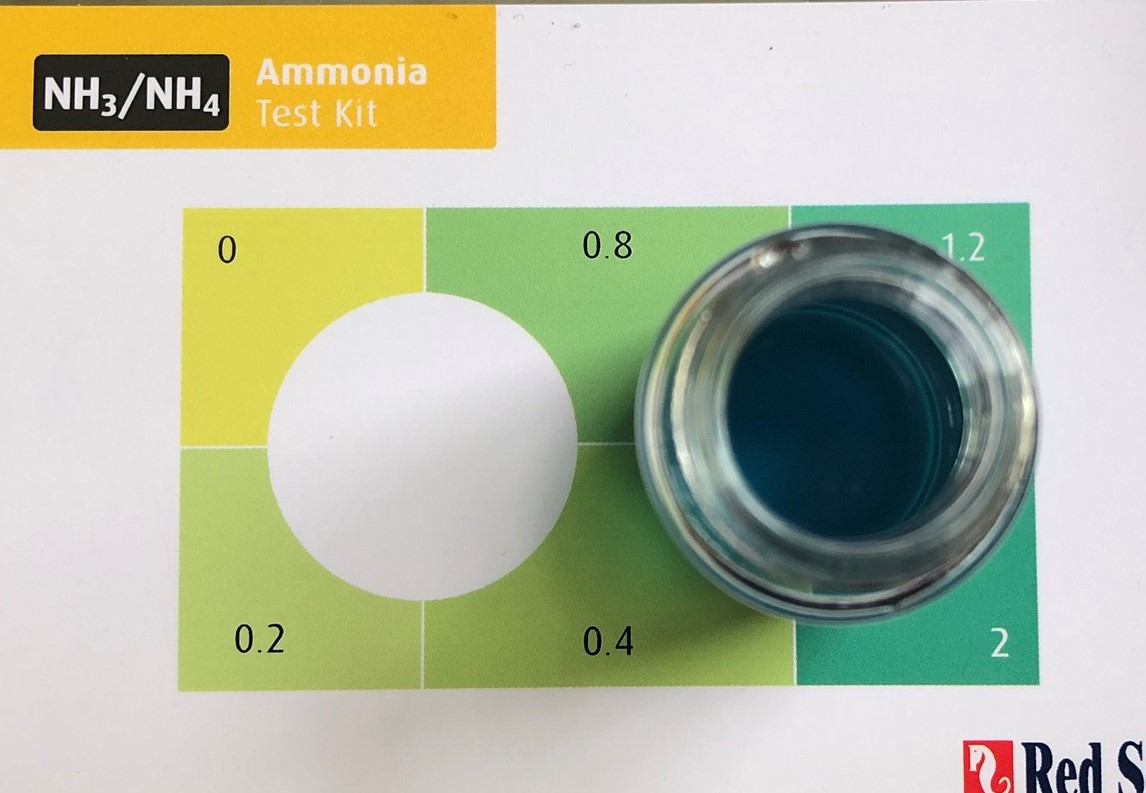 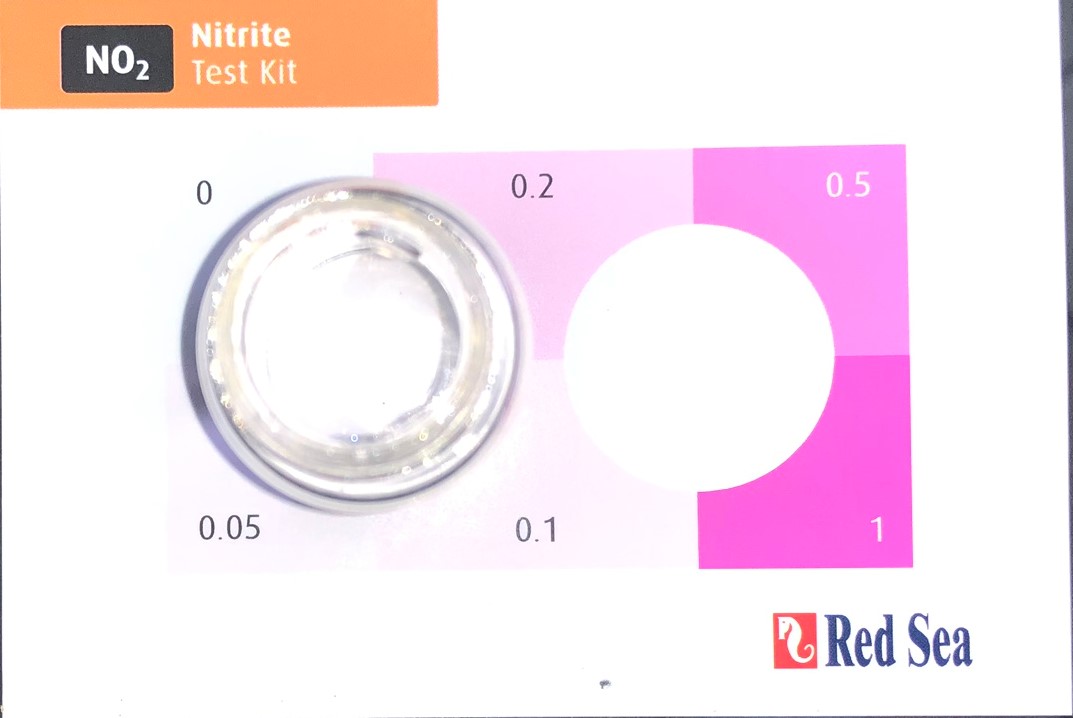 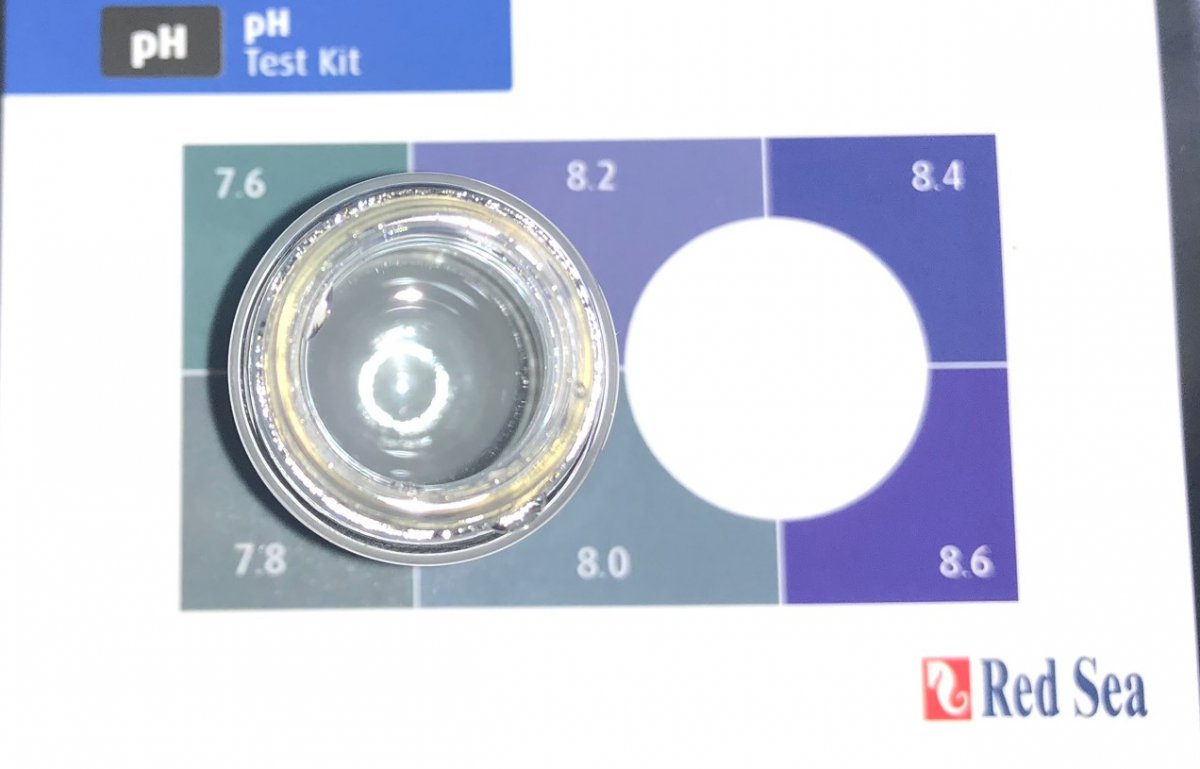 Not too good.
I am testing Amonia right now, and the salinity is at 1.028... so in a few, I will be doing a small water change with lower salinity.

Here is the tank, full of salt and RO/DI and sump running well.

Started to check out setting up the RODI in its own area in the basement.. stepped into water, that was not water.
Just spent over $1200 on a new sewage ejector pit. Cleaning, and bleach for the next few hours, RODI can wait happily in the clean.
This will put a lot back on my plans for the tank. Specifically the lighting
OP 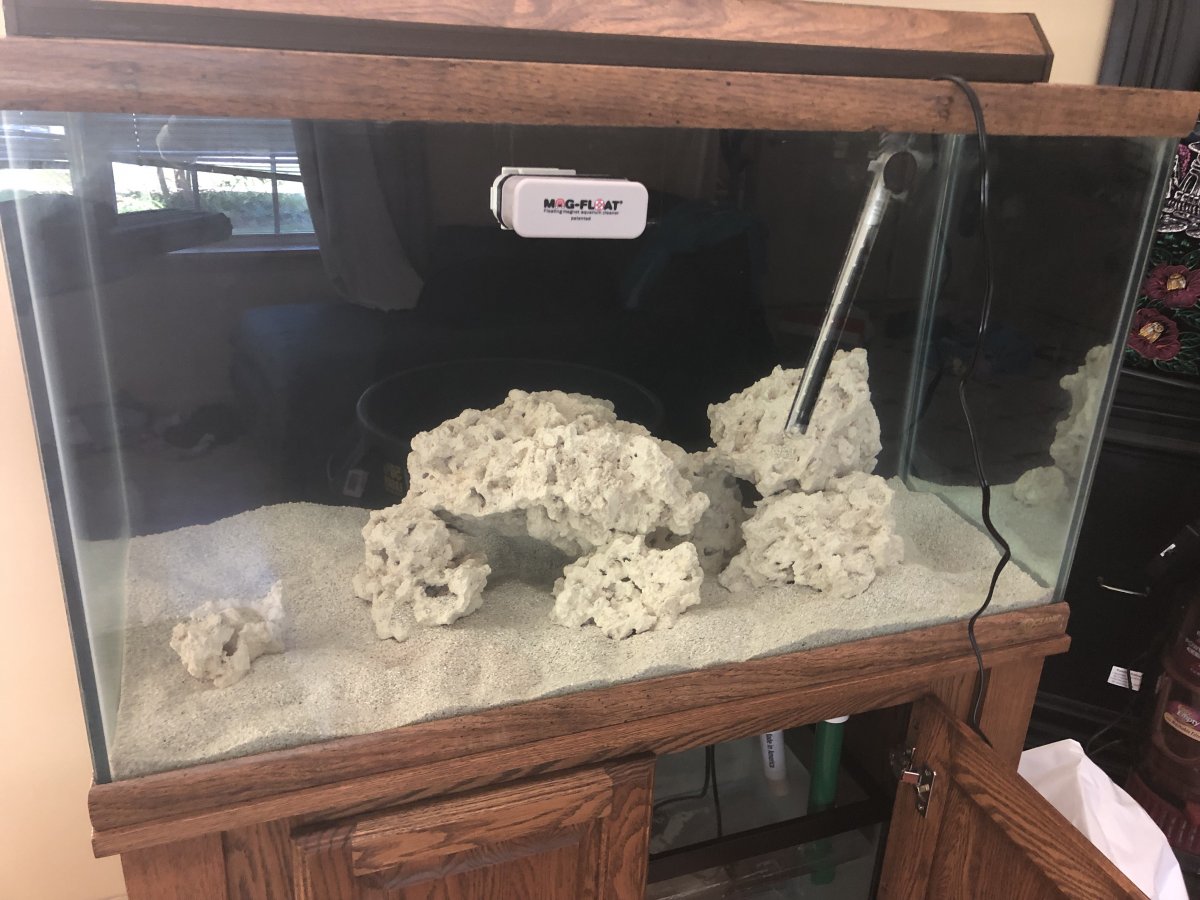 Still too high on ammonia, and salinity is at 1.027 so I will be doing a water change in the am. RO/DI is making fresh juice now.
OP

Hooray, I am getting Nitrite now, still too high in Ammonia, but at least I know the bacteria have started doing their thing.
We will see how long this takes to get to a double 0 reading. I would like it to happen before Chicago Aquashella, but realisticly I am looking to complete before the Chicago Reefapalooza next month. 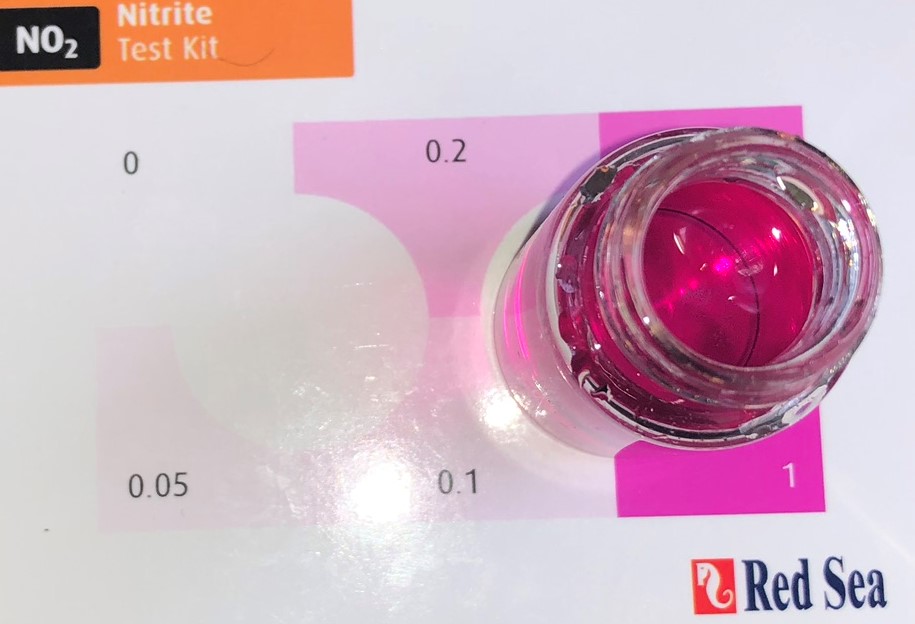 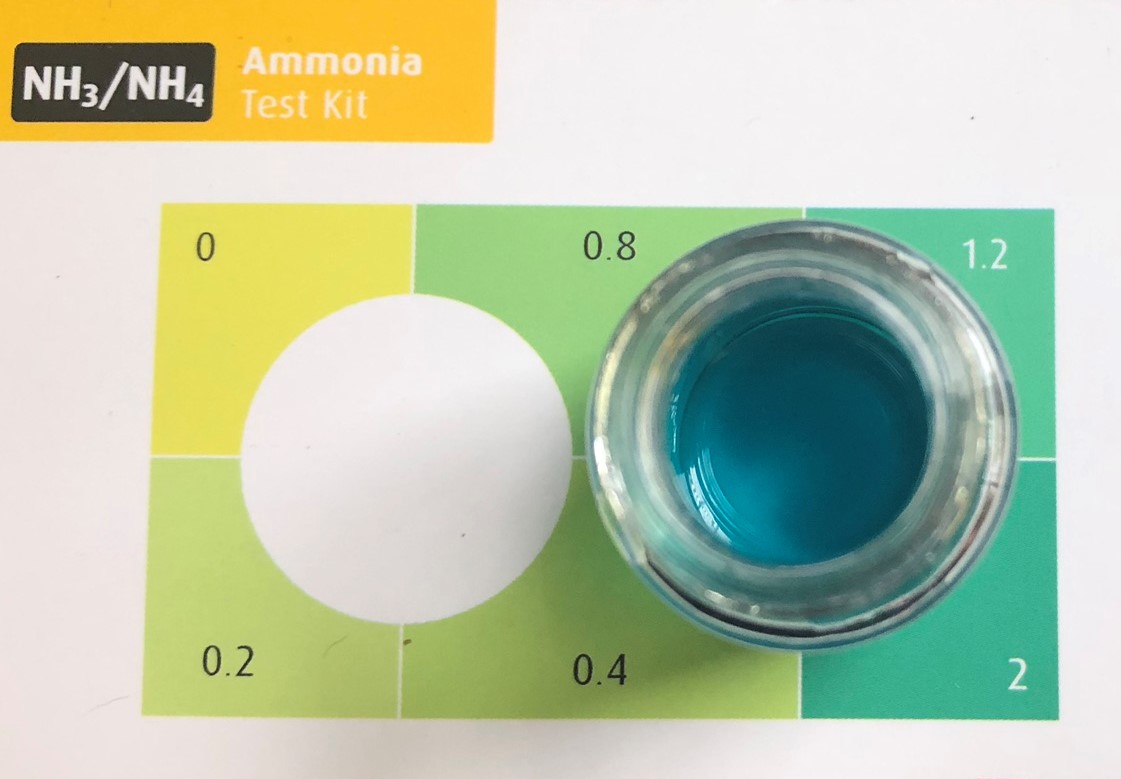 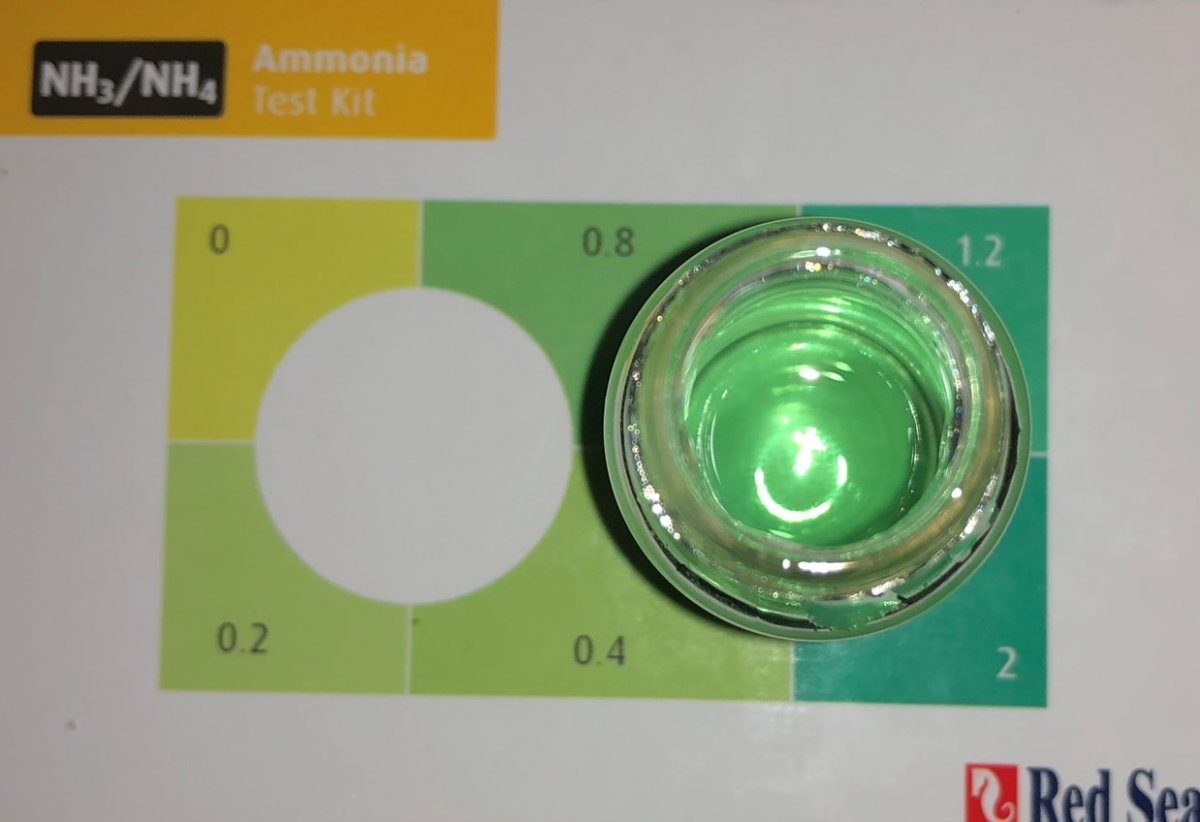 Holy smokes those little guys are doing their work... I may get cycled before this coming weekend....
OP

ok, things have progressed in very few days. Here is this morning tests. Last night, ammonia was at .4:

Build Thread back at it after a couple year with a new waterbox marine x 60.2
2