Hoping someone can help diagnose whats happening to my tank. I have a handful of Acro frags, and I lost one Millipora yesterday, and it looks like 2 more acros are on the way out.

I was running ultra-low-maintenance LPS for a while, but recently went towards SPS since I have more free time to monitor the tank. I have All-For-Reef set up on a dosing pump, and it was dosing 2mL per day, but the parameters crept up. I reduced the dose so the calcium drops by 10 ppm per day until I can get it to 420 ppm.

I think nitrate might be skewed high from the Red Sea AB+, but either way, the corals were all happy and doing well last week at the same parameters. LPS is growing quickly, and all of the corals have great polyp extension. This was also done with an old API color strip test kit. The other kits are up to date (other being not PO4 or NO3).

I switched from IO Reef Crystals to Tropic Marin Pro Reef salt about a month ago.
I was buying Reef Crystals from my LFS, but now I'm making my own water with a BRS RO/DI system. TDS of my DI water is between 0 and 1 ppm according to my handheld checker, which is brand new. The LFS water had a specific gravity of 1.020, and I'm trying to slowly raise it to 1.025. I try to go by .001 per week. The first water change I did with the new salt mix resulted in some minor tissue loss on a montipora colony, and possibly some stress on the Acro frags. That was about 3 weeks ago. I did another small water change about a week and a half ago which didn't kill any of my Montipora, but caused one Milli frag to lose some tissue on the base.

Switched pumps a week ago
My Jebao RW-4 had been running strong for the last 3 years, but the flow was starting to weaken, so I replaced it with a SLW-10. The flow pattern on the SLW is much wider, and it moves a lot of water. Assuming it scales in proportion with the AI Nero, the 20% setting that I have it on right now is moving about 900 gph. The RW-4 had previously been set to 100% power, which should have been around 1000 gph. No corals are in direct line of fire of the powerhead. I also swapped the return pump with my spare Sicce so I could clean the old one. I let the new one in there for the time being. I'm worried that the Jebao might be leeching something into the water, since the first Milli frag died 2 days after I installed the new pump. I rinsed it in RO/DI water before putting it in the tank.

Element levels creeping up:
Dosing All-For-Reef through a Kamoer automated dosing system. I test Ca, Alk, Mg, and pH daily. Over the course of 2-3 weeks, Ca, Mg, and Alk all crept up since I had the pump dosing just a little too much per day on accident.

Low pH:
I dosed 1/2 inner capful of AquaVitro Balance yesterday morning and the corals were fine all day. I checked this morning and my Pink Lemonade and a Green Milli were both RTN'ing from the base. I think low pH is causing some amount of stress. I'm considering starting a refugium in the back chamber to get some photosynthesis going at night, but I don't want the algae to suck out too many trace elements or nutrients that the corals need.

High Nutrients:
I've increased feeding recently. The corals seem to love the Red Sea AB+, and they have all gained more intense coloration since I increased feeding. I have a media basket in the back with filter floss, and some ceramic media in the 2nd rear chamber. Related to high nutrients, I think my clownfish are spawning/laying eggs. I'm considering adding some Brightwell Xport or Marine Pure biological media to the rear chamber to aid with export. I'm also considering adding activated carbon to the media basket.

Lighting:
I've messed around with the lighting schedule over the last couple weeks. I have UV and Violet at 70%, Blue channels around 45%, Green around 15%, white at 10%, and red at 5%. The colors would all ramp up in the morning, but last week I changed it to have no white or red light for the first 2 hours of the photoperiod. Lights come on at

Misc:
Candles lit in the same room as the tank occasionally
a few dog hairs (likely coated in trace amounts of anti-tick medicine) have probably landed in the tank


The corals that are stressed are: 2 Monti Caps, which lost a little bit of color, and one lost a small amount of tissue which has since regrown, 1 Milliepora which died, another Milli which is currnetly RTN'ing and will probably be dead by the end of the day (it had minor tissue loss on the base for the past 3 days), and 1 Pink Lemonade frag which lost its color and is RTN'ing as fast as the Millie. It was looking slightly duller, but didn't seem to have any tissue loss yesterday. One birds nest lost a little tissue on the base as of yesterday morning. It didn't lose any more overnight. I did a 1 quart water change yesterday afternoon.

The LPS (Favia, Acans, Hammers, Duncans) are all growing quickly and have strong coloration. They are fleshy/inflated and seem happy.
The other SPS (Red Planet, Walt Disney, PC rainbow, Oregon Tort, 3 different Birdsnests) all seem happy and have full polyp extension. The corals that just died are all towards the bottom of the tank. 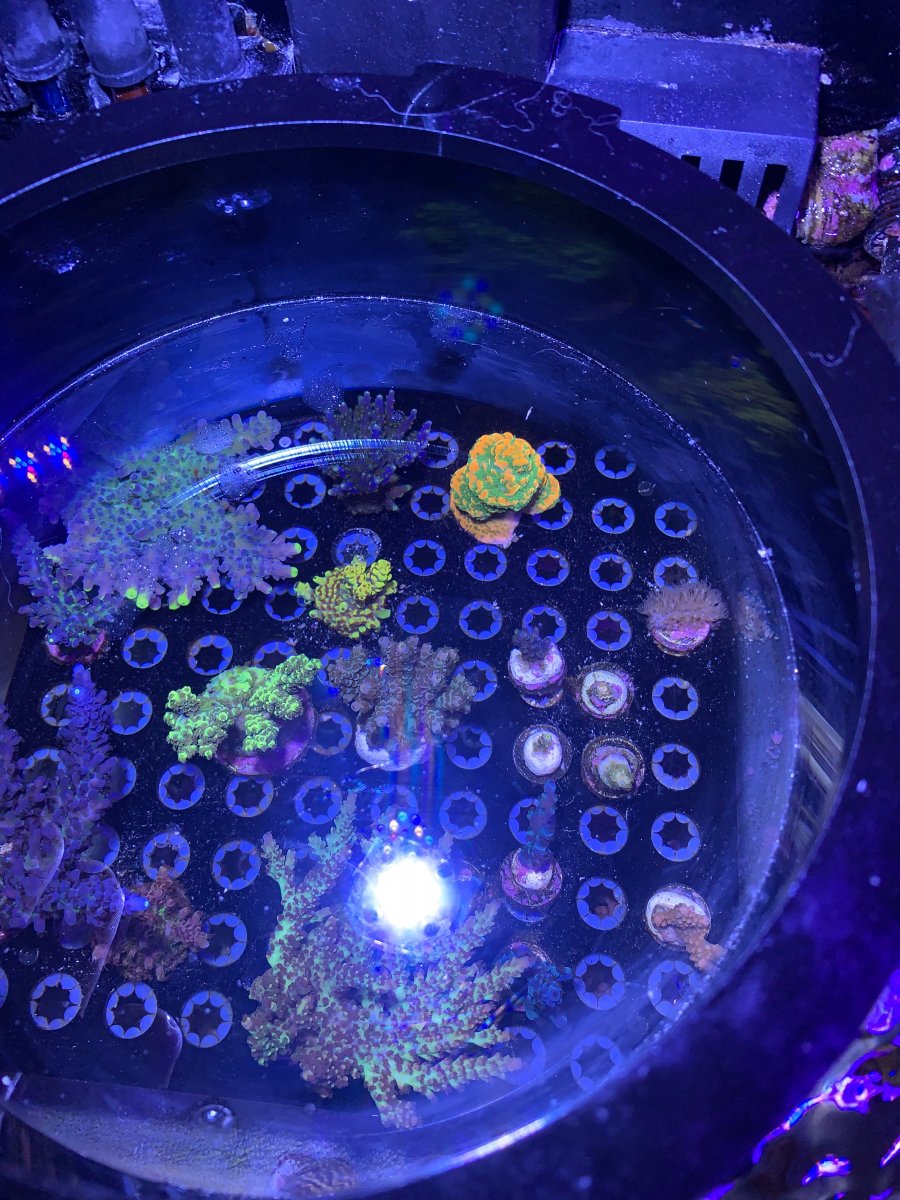 It only produces about 200-250 par 6” below the water nearly maxed out. Your settings are way lower and they’re being weakened even more with the diffuser on a tank twice the size.
Last edited: Sep 15, 2020

I also use tropic marin pro and all for reef so I don’t think those have anything to do with it. Crank up your lights.
OP

Your calcium looks a bit high, but I do also agree with @Chaswood79 about light. How fast have they been dying?

your tank and frags looks great btw!
Click to expand...

Not in that tank but my acans and and zoas in my other tank receive +200 par as well. My dt has some spots of over 600 par from 2 hydra 52 hds. Do you have or checked with a par meter?

your tank and frags looks great btw!
Click to expand... 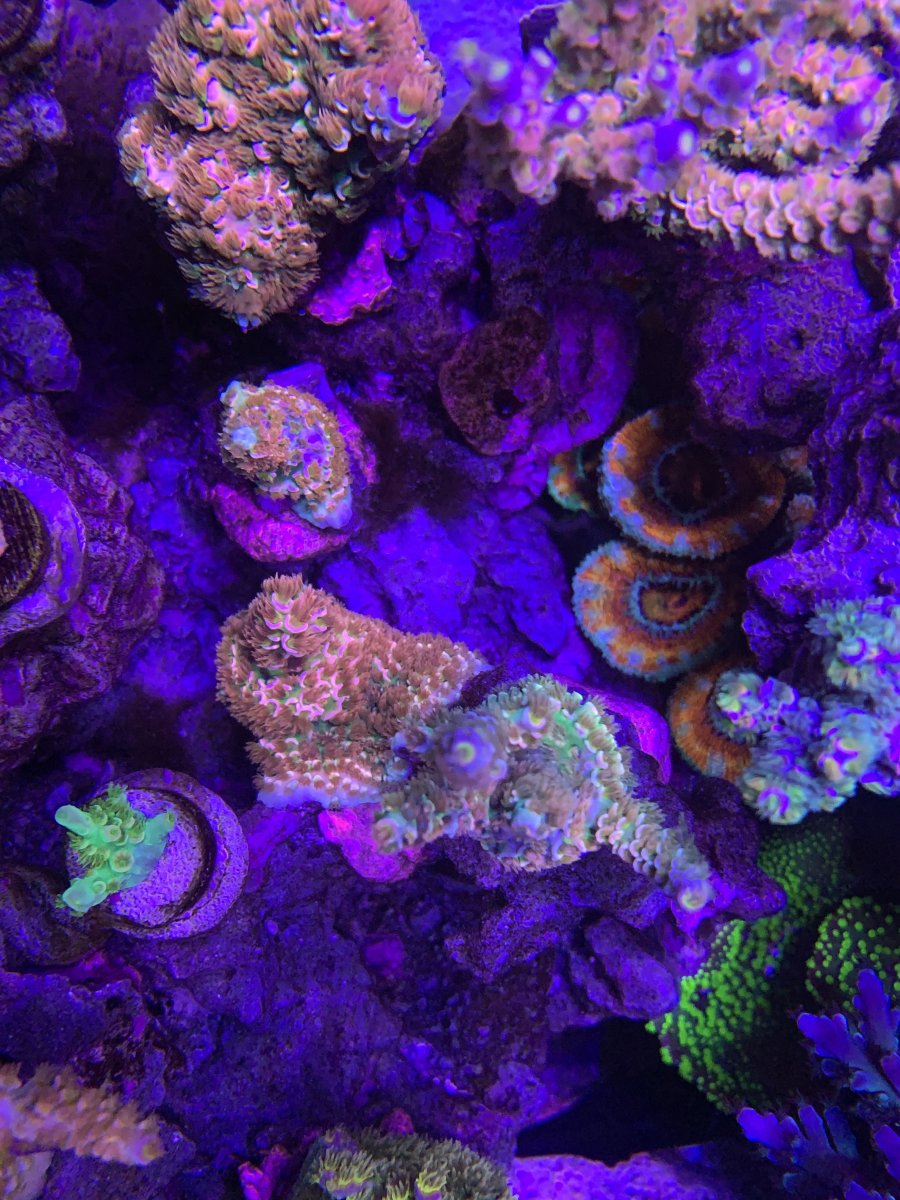 Some of those acans are receiving 300-400 par. I don’t believe you can give your corals too much light with that prime. I would max out the blues for sure and adjust the white to please your eyes. And then leave it alone
OP

I haven't tested PAR. I would buy a Seneye if they were MAC compatible
S

Par meters are a very good thing to have access to. I would check and see if you LFS has one that you can borrow/rent

Strad12 said:
I haven't tested PAR. I would buy a Seneye if they were MAC compatible
Click to expand...

I have the apogee 510 which is the best hobby grade available. I’ll check your settings with my meter on my prime 16 when I get home.

Thanks. I'll upload my exact setting (I just raised the Blue channels to 60% from 50%)
OP

Here are the levels at noon (peak of the day) 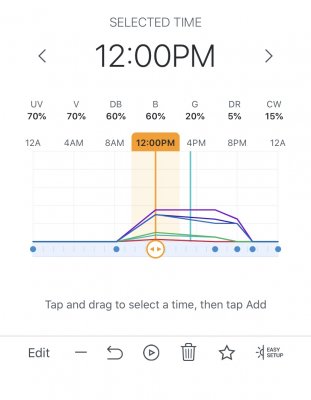 Strad12 said:
Here are the levels at noon (peak of the day)

How high is your light mounted above the water line?
OP

Here are a few pictures of the tank and a few of the acros (pic 2 and 4 are of the stressed Pink Lemonade and green Milli, pic 3 is the happy WD and PC rainbow) 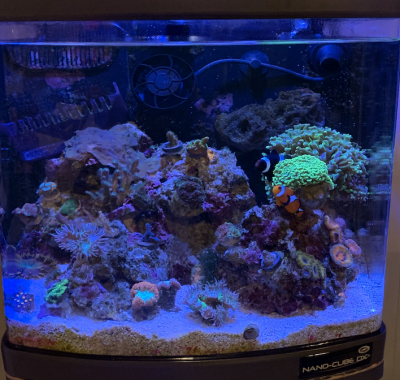 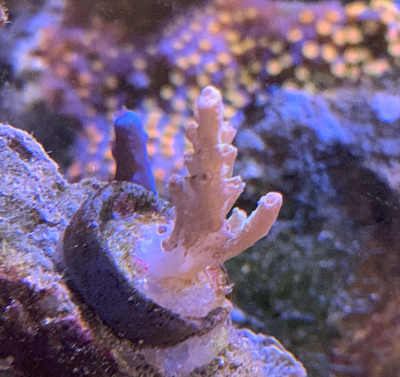 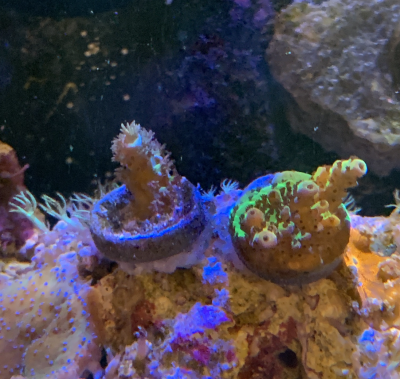 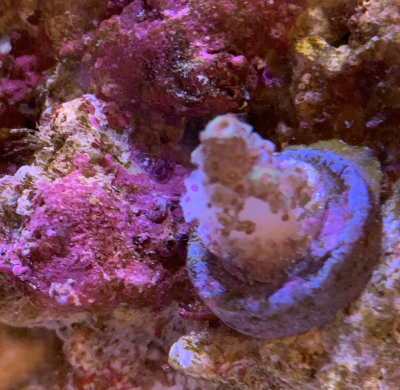 It was honestly a little more than I expected but still low. Remember your diffuser will reduce it even more and this is the highest part of your settings. It drops off even more 4-6 inches in all directions.

Thanks so much. I'll bump up blues and violets a little more to hopefully clear 250 PAR with the diffuser.

Strad12 said:
Thanks so much. I'll bump up blues and violets a little more to hopefully clear 250 PAR with the diffuser.
Click to expand...

I’m going against one of my pet peeves here, but I’ve read, meaning I have no first hand knowledge, that the diffusers can reduce par by 20-25%. It irks me when ppl answer or offer insight to things they have no real experience to back it up. So that’s what I’ve read. Take it for what it’s worth. I believe you should find a way to check your par, especially since you popped the top on your first Tenuis. The addiction gets way worse from there.
OP

I saw another thread where someone checked the PAR levels of an AI Prime with and without a diffuser and they measured 10-15% reduction, which is where I got my number from. I'll try to pick up a PAR meter to verify myself. I added 7mL of Seachem Balance to raise the pH .3, so hopefully low pH won't be stressing the corals overnight. I'll report back in the morning.

Strad12 said:
I haven't tested PAR. I would buy a Seneye if they were MAC compatible
Click to expand...

Could always run parallels with Windows or spin up a virtual machine with windows and go from there.