For some reason back in March or April I got the dumb idea to get into saltwater aquariums. It's been over 20yrs since I had a salty tank. It was a simple 29 classic with a HOB wet/dry filter, T8 fixture, dolomite bottom and some random rocks (quartz?) from my back yard. I was 12 yo or so, and had gotten the equipment used from a local swap publication with the help of my parents. It served well as a fish only for number of years with just regular water changes and carbon. It even survived a 7 day no-power ice storm in '97. I had various fish from a blue damsel and domino from cycling to a coral beauty, flame angel, koran juvenile, and yellow tang - YES, all at the same time - because I didn't know any better and it was before Google and the Tang Police. I remember going to the LFS (shout out to Pet Quarters, RIP) and looking at the specimens. I generally only got a new fish when my grandmother came for a visit up from D.C. once a year. Things were going along fine until a lady bug infestation of our house caused dozens to end up in the water and poisoned the tank. Crash... all fish died within 5 days. Maybe it wasn't the lady bugs, it's just the best answer anyone has come up with and if not, it was one heck of a coincidence. I cried; my mom let me take a day off school to mourn.

Fast forward to this year. Something, I don't recall what exactly, drew me into the fish world again. I was poking around looking at setups and made the error of walking into a pet store and getting inspired. Then my grandmother passed away and it quickly became a way to honor her and remind myself of those times we picked out fish for my tank.

I began looking at Craigslist posts and saw things listed that I didn't know anything about; return pumps, sump baffles, ATO, LPS, MP10, and a host of other terms and abbreviations. I've gone from looking at EVO 13.5 to BioCubes to 75g and Reefer 250s all the way to 120g systems. I managed to glance at my bank account and calm the gallon-itis for now... settling on a $100 Oceanic 50 "cube" that's 30x18x21 with a proper 2004 black with faux-SS accents stand. As a bonus, its small enough to go in my living room, rather than being relegated to a less active room where I might not see it as much.

I am in construction by trade so I have all the toys (tools) for various projects and am not shy about cutting and drilling so putting the over-flow in and building a knock-off Trigger 26 sump out of a 15 gallon tank was the name of the game. I had the acrylic laying around from a past project but even so I have since learned: pay the money. Cutting, re-measuring, guessing, grinding, more guessing, bonding, cursing... it's not worth it. I spent a long Saturday building the baffles for this sump that less than $100 on eBay would have avoided. Nonetheless, I am operational after chasing down some leaks; primarily from gasket/bulkhead nonsense that still is confusing to me.

I meant to take more photos along the way since the collective here seems to really enjoy them. I didn't stop much during the process to take photos and I managed to take my phone swimming between then and now, losing a number of shots that I did take! I'll try to take some now that it's in place, and certainly can expand on the process if someone has questions.

Now we wait. I'm a over a week into cycling the 40lbs of amazon dry rock and 40lbs of Petco $5/bag aragonite. I used One and Only with household ammonia. I consider myself a patient individual, but staring at an empty box of water has it's limits, so a couple days ago I picked up a small piece of "live" rock from the local store. I use "live" lightly as it's basically a chunk of purple dry rock that's been sitting in water somewhere to pick up algae and coraline. However, it seems to be working because after nearly a week of no movement from 2ppm and zero everything else... this morning we have nitrite! And nitrate! Oh joy. The wait continues, but at least there is something happening.

So that's the way it is from here. I hope to put some fish in and get things rolling a bit before trying my hand at some easy corals. Wish me luck. 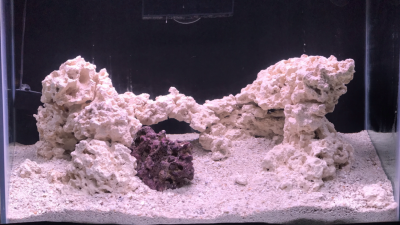 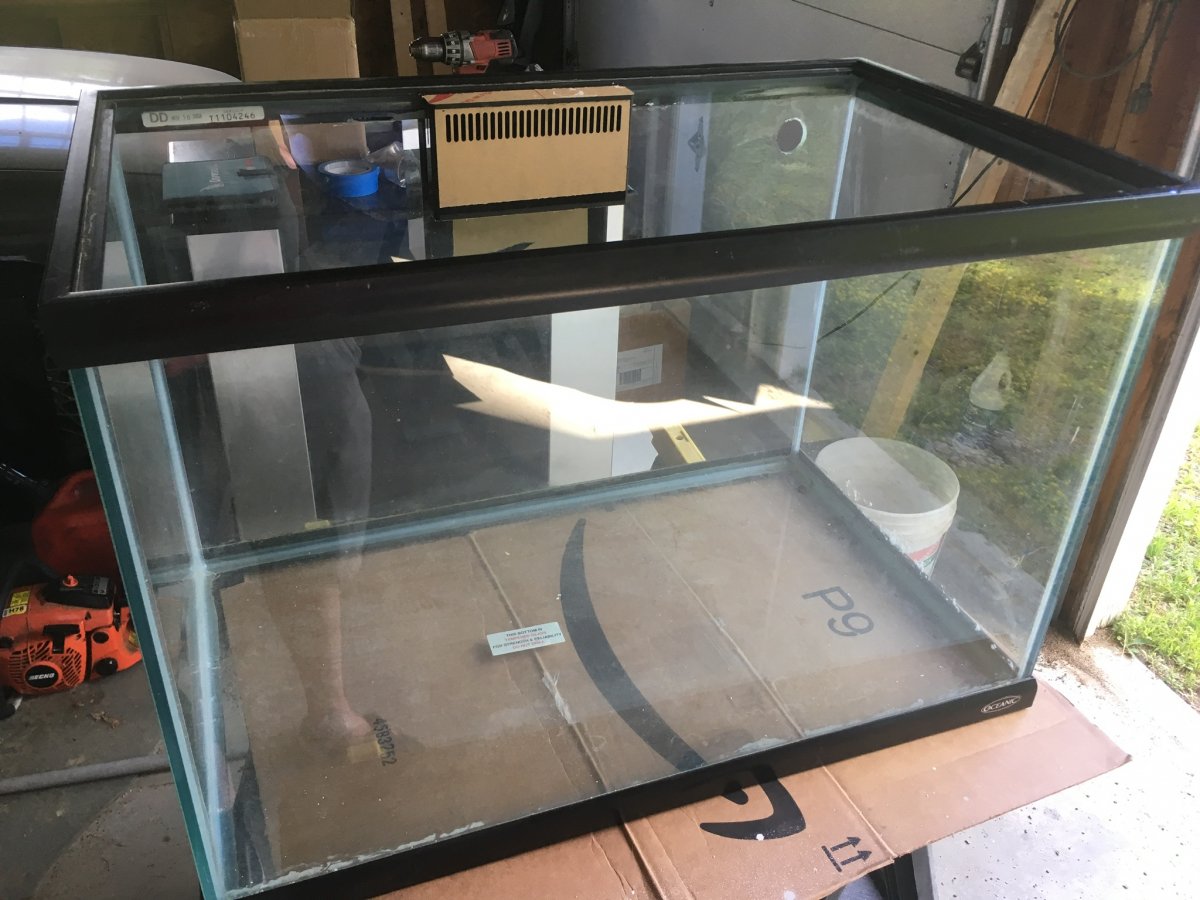 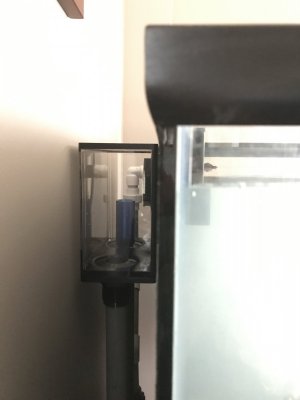 From the aquascaping extravaganza. I ended up drilling and pinning it together. Super easy, can fully disassemble, and no fear of collapse.

Oh, and for the arch... baking soda and super glue trick is really slick. 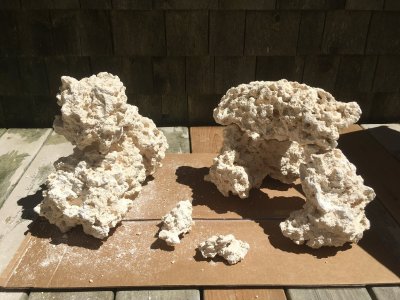 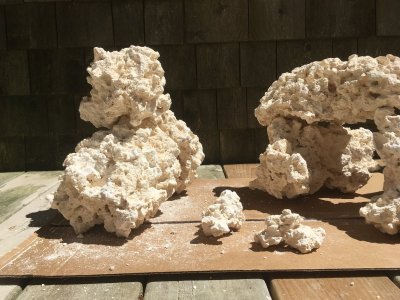 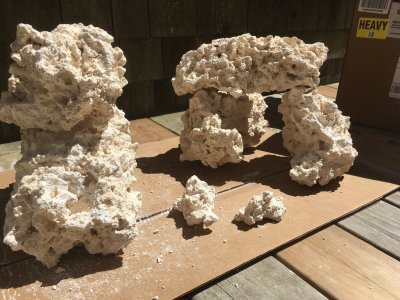 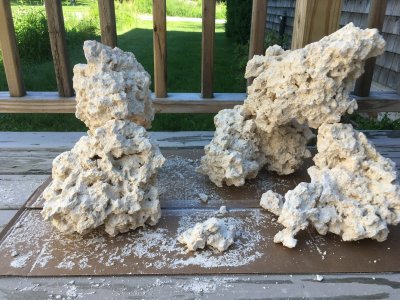 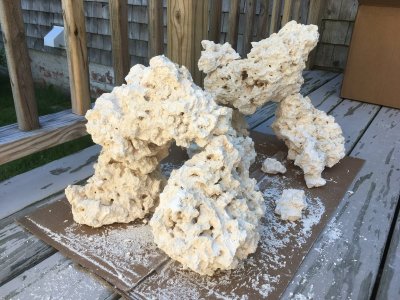 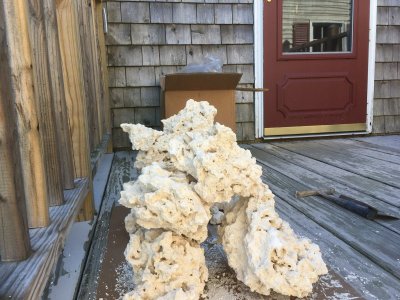 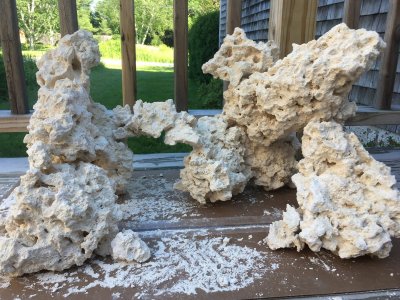 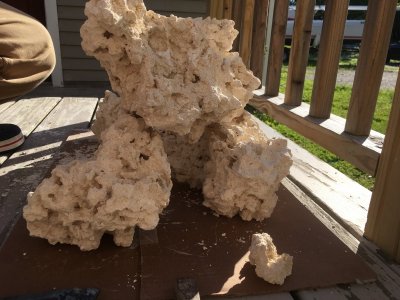 15 gallon because I couldn't get a 20H through the door. It's 18" wide so as it is I turn the tank on end and slide it through, then rotate back into place.

The baffles are from 1/4 lexan. I mocked it up with cardboard and then cut with a tablesaw. Used a combination of hole saws, router, sawzall, and some creative techniques to make the various holes. I welded it together with home-brew glue consisting of acetone and lexan shavings. It's not beautiful, but highly functional. Sealed and set with silicone for plastics.

I made the water height adjustable but when the simplicity 120 skimmer arrives I think I'll discover it needs max height anyway.

I'm looking at 'fuge light options. The area is roughly 9*12 so don't need much spread. Probably will go with one of the Amazon COB deals. 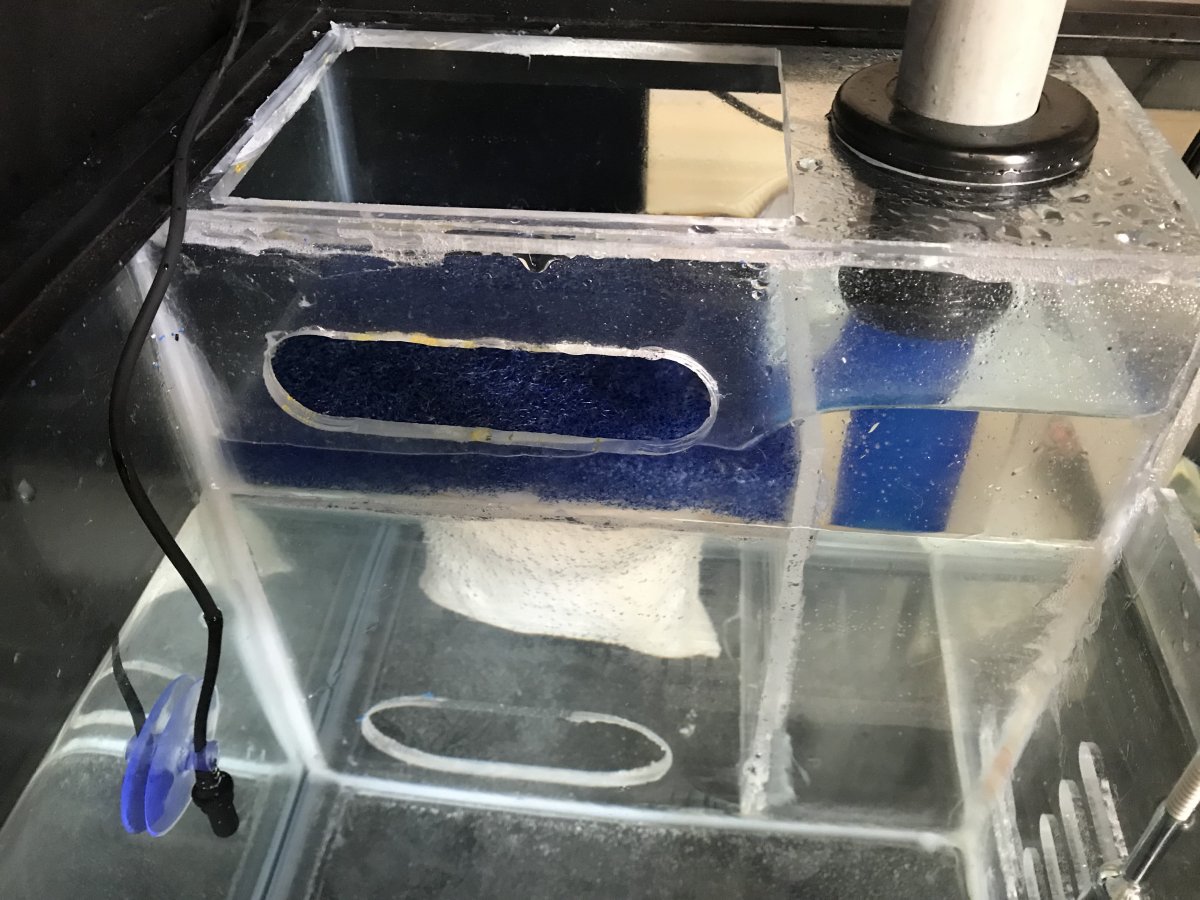 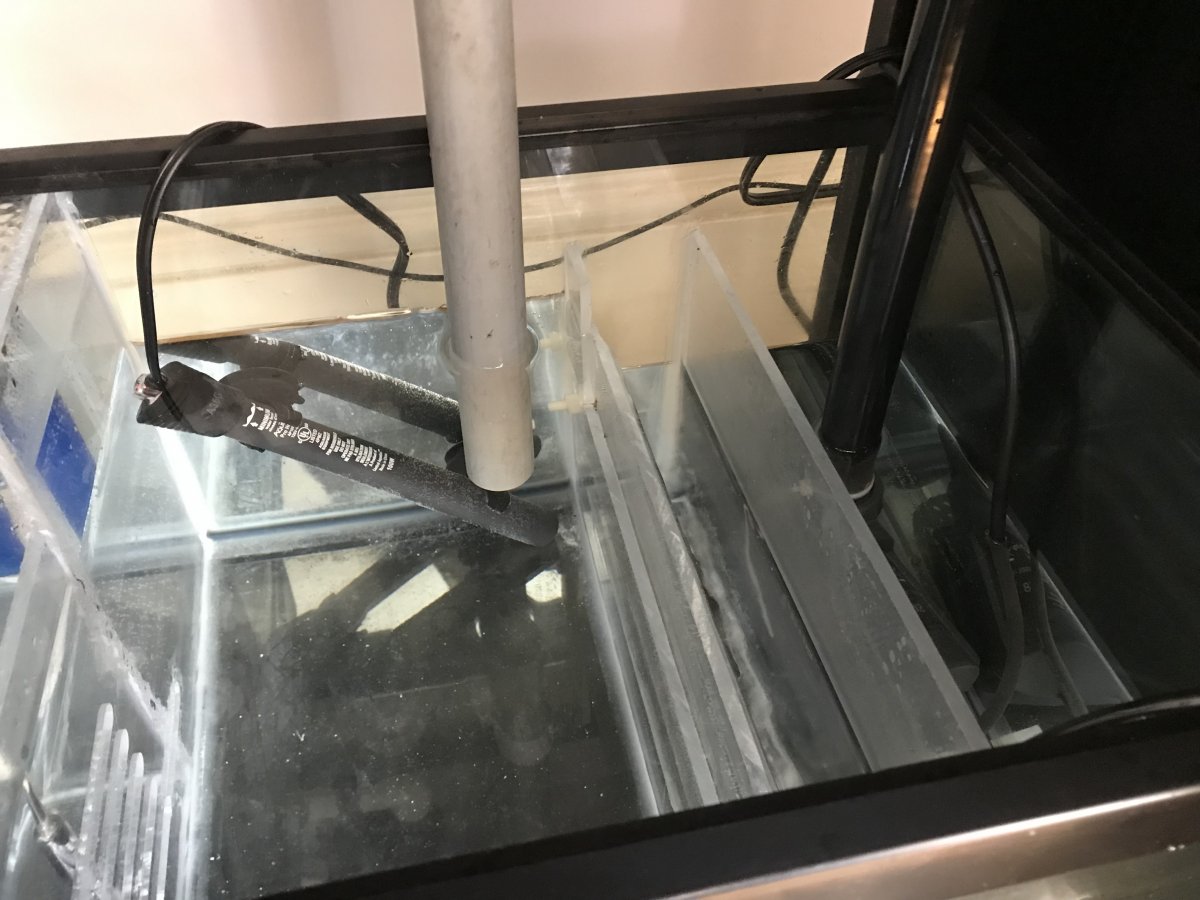 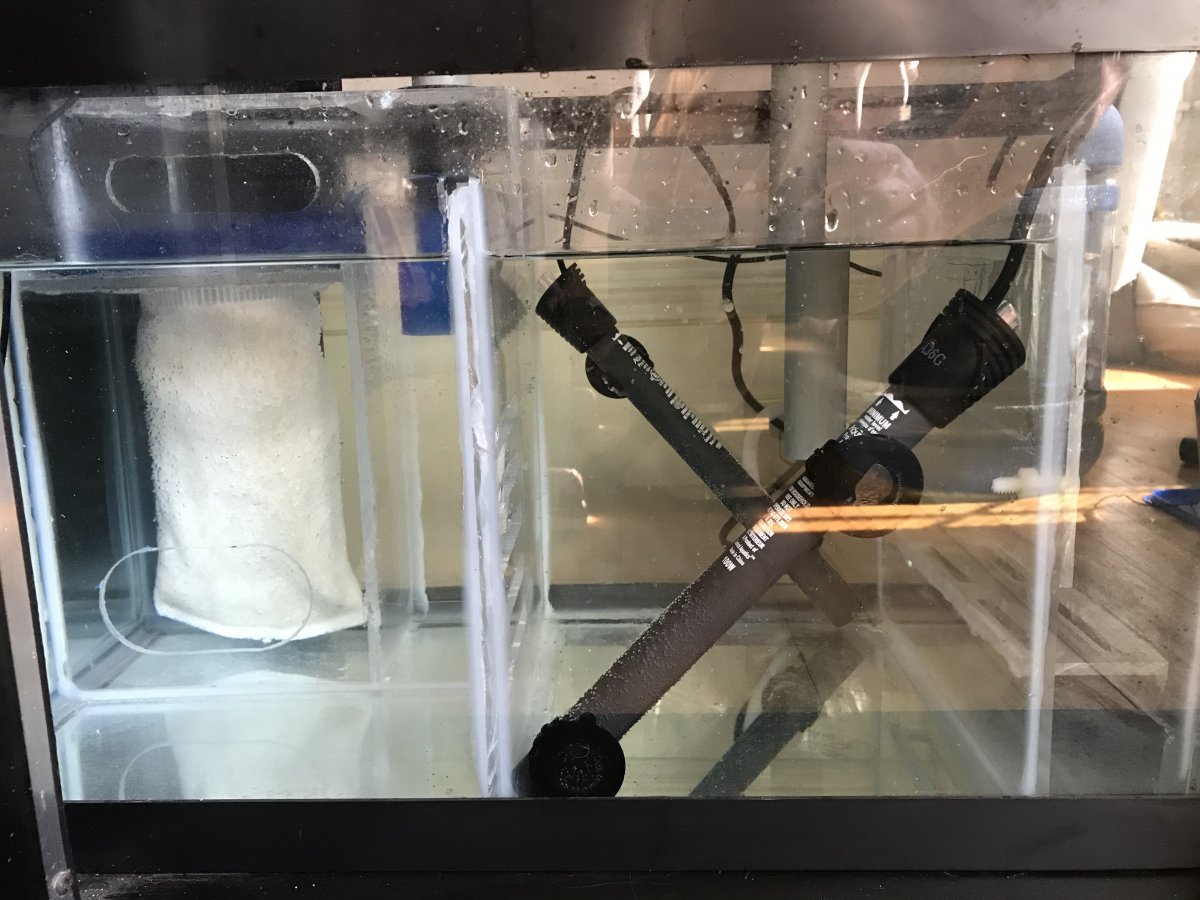 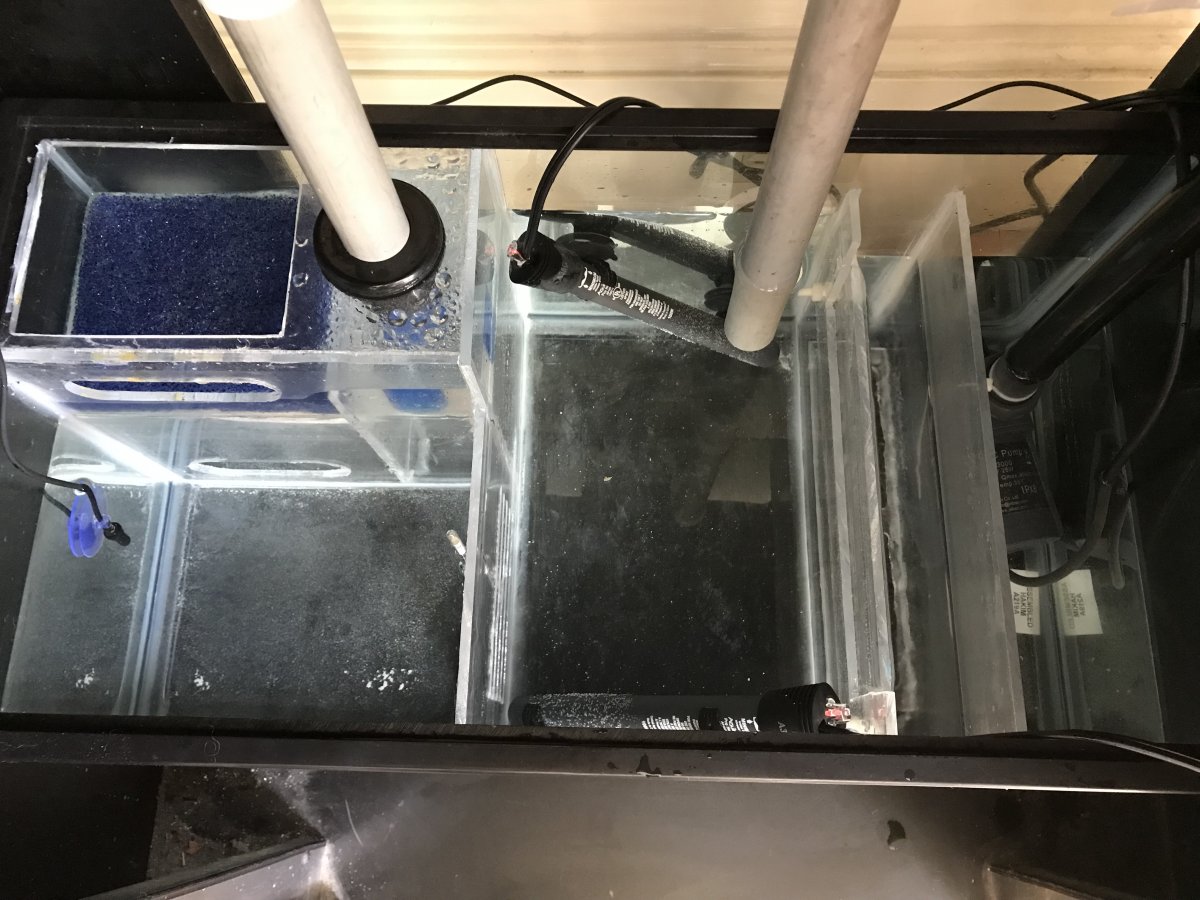 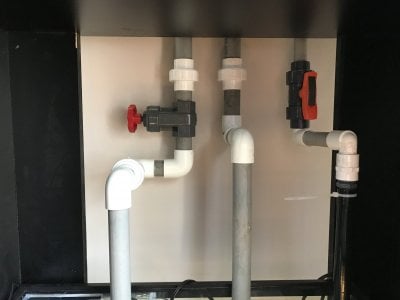 The cycle is maybe done? Processing 2ppm dosed ammonia under 24hrs but the nitrite is out of control. I did an 80% (40gal) water change because Dr. Tim's said to reduce if over 5ppm. Well... It's still over 5 so I don't understand. I guess ignore it for now, mixed advice about accurate testing and toxicity.

What should the first fish be? And CUC? I'm getting the start of some light brown algae on the new rock and sand.

Obviously it will take time to reach a full house. All suggestions welcome.

First fish have entered. Went to a new shop, an in-home style place that’s about 1/2hr away.

Vance’s... owner operator, cool guy. He’s been at the fish thing for 50yrs.

I had my girlfriend with me and that’s when things got real.

She has been campaigning for Bangaii’s the entire time I’ve been setting up the tank, so when she found two tiny cardinals in a tank, I was doomed.

After a lengthy chat with Vance we determined it would be safe to take them home.

We’re 36 hrs in, they are just starting to venture out. I was worried for awhile because one seemed to be constantly listing rather than staying vertical. I reduced the flow in the tank and combined with a wait-and-see strategy, they seem to be improving.

So, here are Jose & Cuervo: 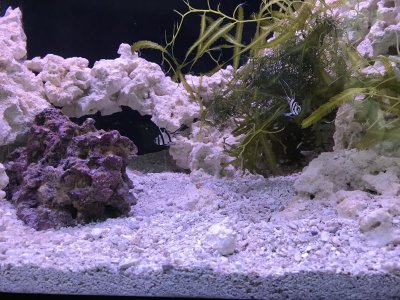 Cuervo and Jose it seems are both females by my vent spying. Cuervo was being the aggressor so she got brought back for credit.

Jose is a weeny. Always hiding and looking like the police are after them.

Picked up a high fin and candy stripe pistol, Burt & Ernie. The goby (Burt) was acting weird for a few days laying out in the open with a s-curved body. Freaked me out. He has since paired up with the shrimp (at the back of the tank where it’s almost impossible to see).

After a few days of being a good watchman, and eating on schedule the goby has disappeared for a couple days. Trying not to panic. 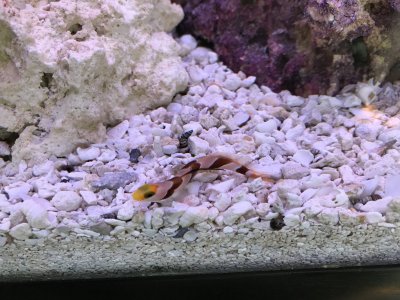 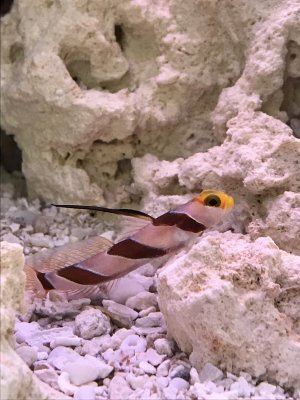 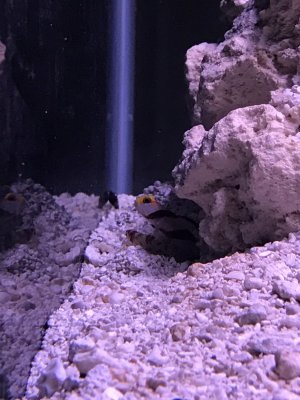 The other addition is a orchid dottyback, Margarita. She’s been doing well for the most part. Was flashing on the rocks quite a bit for a couple days so I began to think gill flukes.

Attempted to catch her for a fwd but that was impossible. I don’t know how anyone would catch such a small fast fish without absolutely demolishing the rockscape and stressing everyone out.

She’s doing better now after the wait-and-see treatment. Takes swipes at Jose the Cardinal which doesn’t help the paranoia. 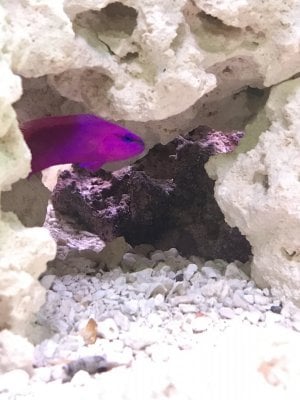 Build Thread Back in the hobby