Welp. Tried aquascaping last night, and that was a complete disaster... Decided to use Aquaforest Stone Fix instead of E-marco 400 because it was cheaper. BIG mistake. The only thing the stone fix accomplished was drip everywhere. So now I have to go spend more money for the E-Marco stuff, and also contend with more ugly gray stuff on my rocks as well. *sigh*

Picked up a free sheet of glass off facebook market this morning to cut into baffles for the sump. It went... um... Well, it went. I got the pieces I needed, sort of. 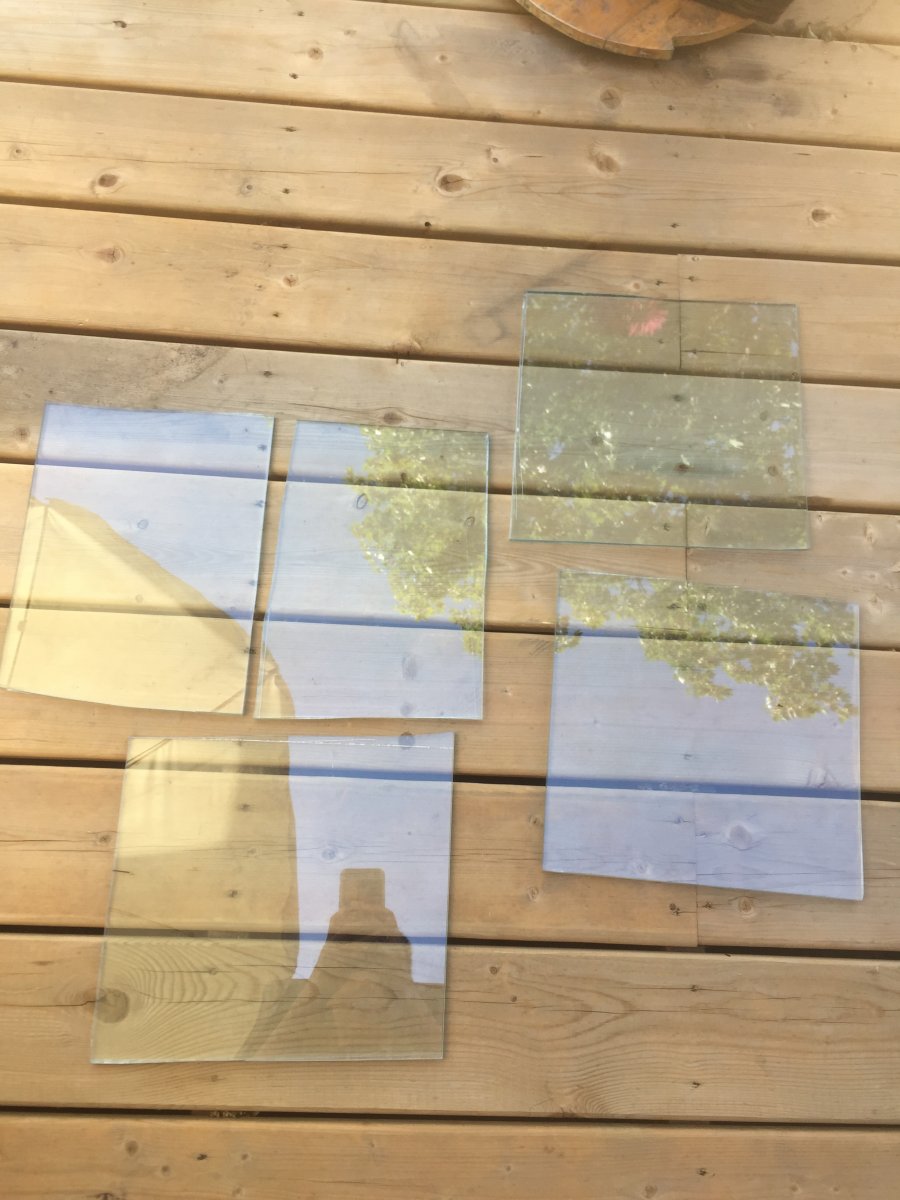 Ignore this though, this is totally not waste from a 3x6 foot sheet of glass and today totally wasn't my first time cutting glass >.> 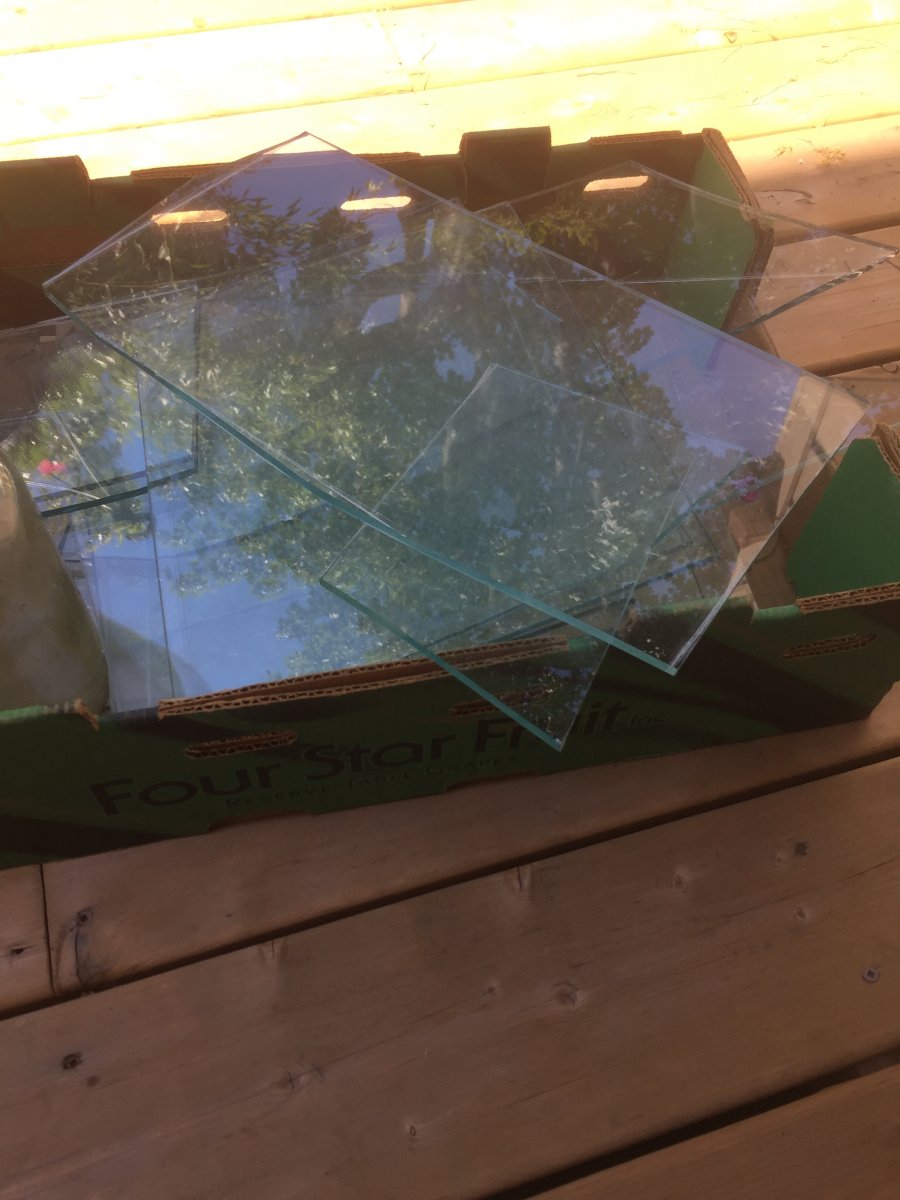 Ok so it looks like I owe Aquaforest Stone Fix an appology... Turns out the issue was that I was making it waaay too runny. In my defense though, I followed the instructions on the bag, which said 100g powder + 50mL water. The actual amount of water used is probably closer to 25-30mL. Thankfully, even with my blunders, I still had just barely enough cement to finish my scape. Woo! 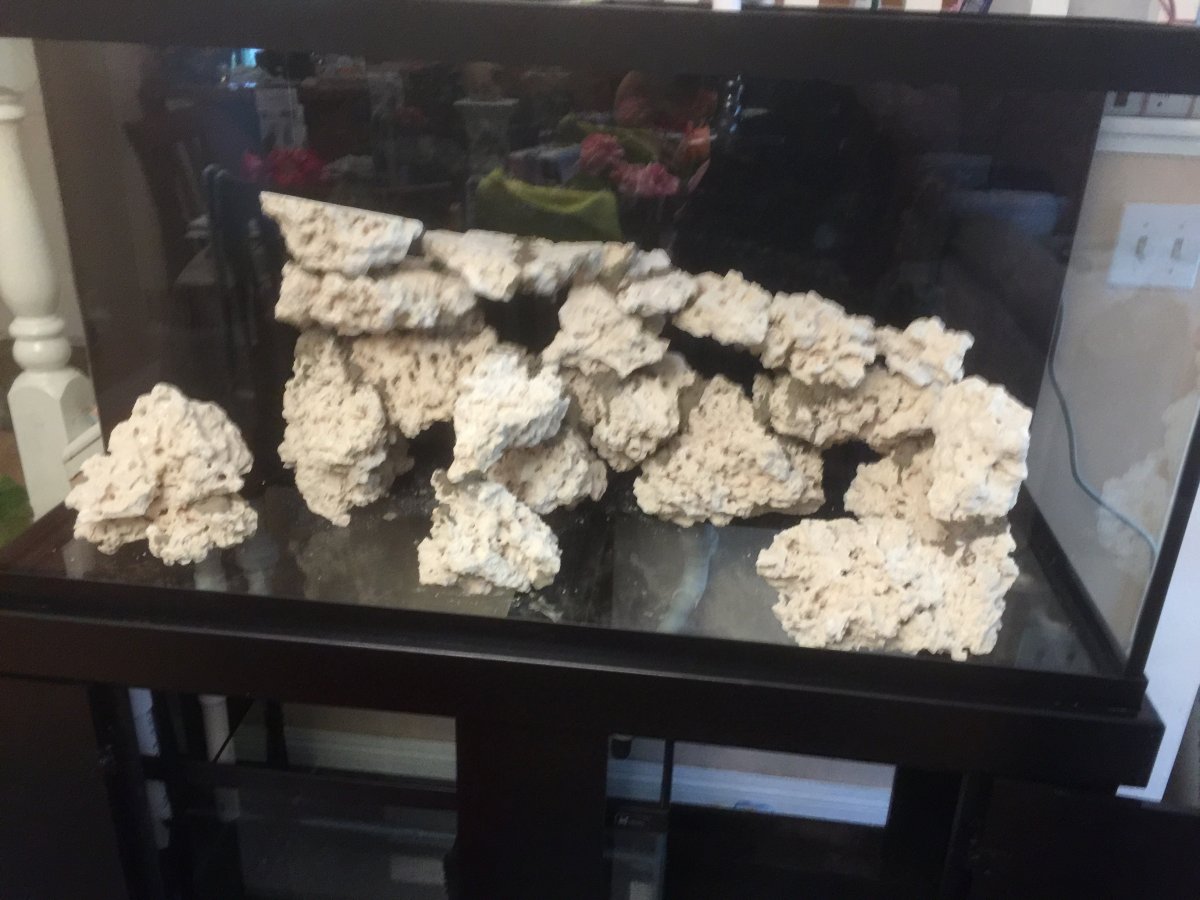 Also finished the plumbing and the sump. It works as intended, but I didn't get enough silicone so I only had enough for the main baffles. And honestly, I'm ok with that. Sand and water will go in tonight, along with salt, and hopefully tomorrow I'll be able to transfer over some rocks from the biocube and get the cycle started. 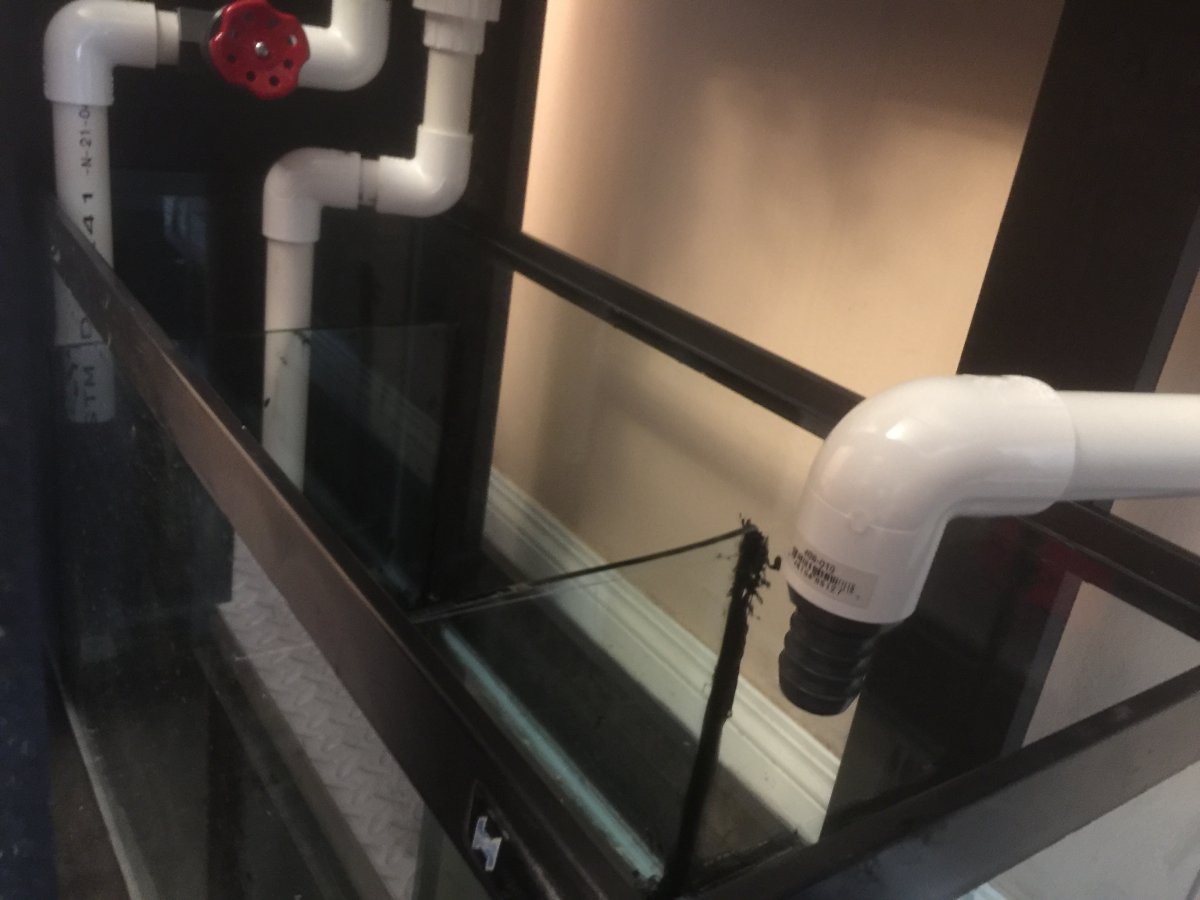 And so it begins! Transferred about half the rocks from the back of the biocube to the sump, and started dosing microbacter7 again. Here's to hoping it doesn't take too long. I'm figuring about a week. Have I mentioned that I hate waiting for the cycle to complete? 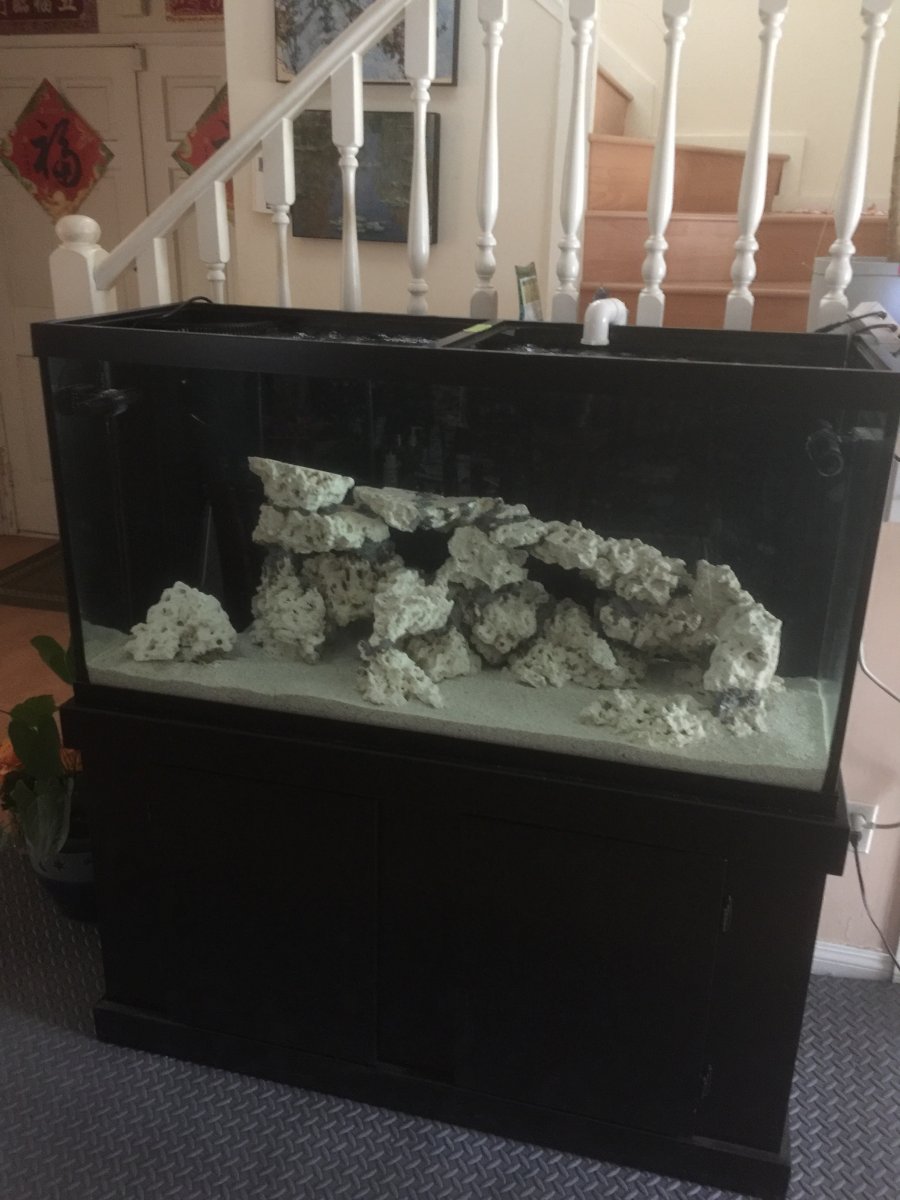 Oh yea, lights got delayed, AGAIN. Now it says arriving Tuesday instead of tomorrow, even though it's already in my city... Thanks for nothing, Canada Post =.= Next time I'm paying the $20 for faster shipping instead of just taking the free option.
OP

SOOOOOO. It's Tuesday! Where are my lights, Canada Post? Not arriving until tomorrow, apparently. Yaaaaaayyyyyyyy....

In the mean time, I picked up some live rock from a local tank shutdown. It looks fantastic, and comes with a bunch of sponges, sea stars, and tiny little snails. Hopefully this'll get the cycle going nice and quickly. I feel like Timmy's dad: "And this is where I'd mount my lights, IF I HAD ONE". End rant. 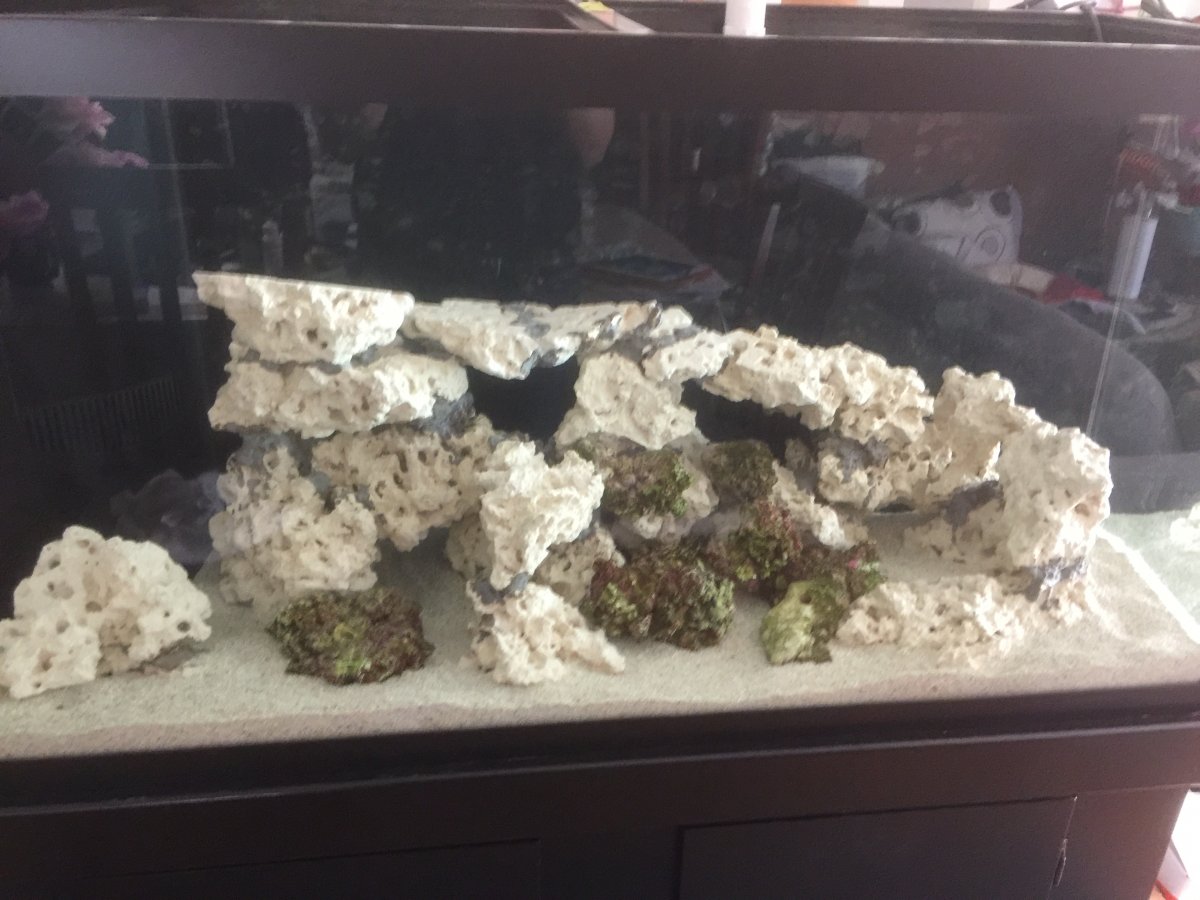 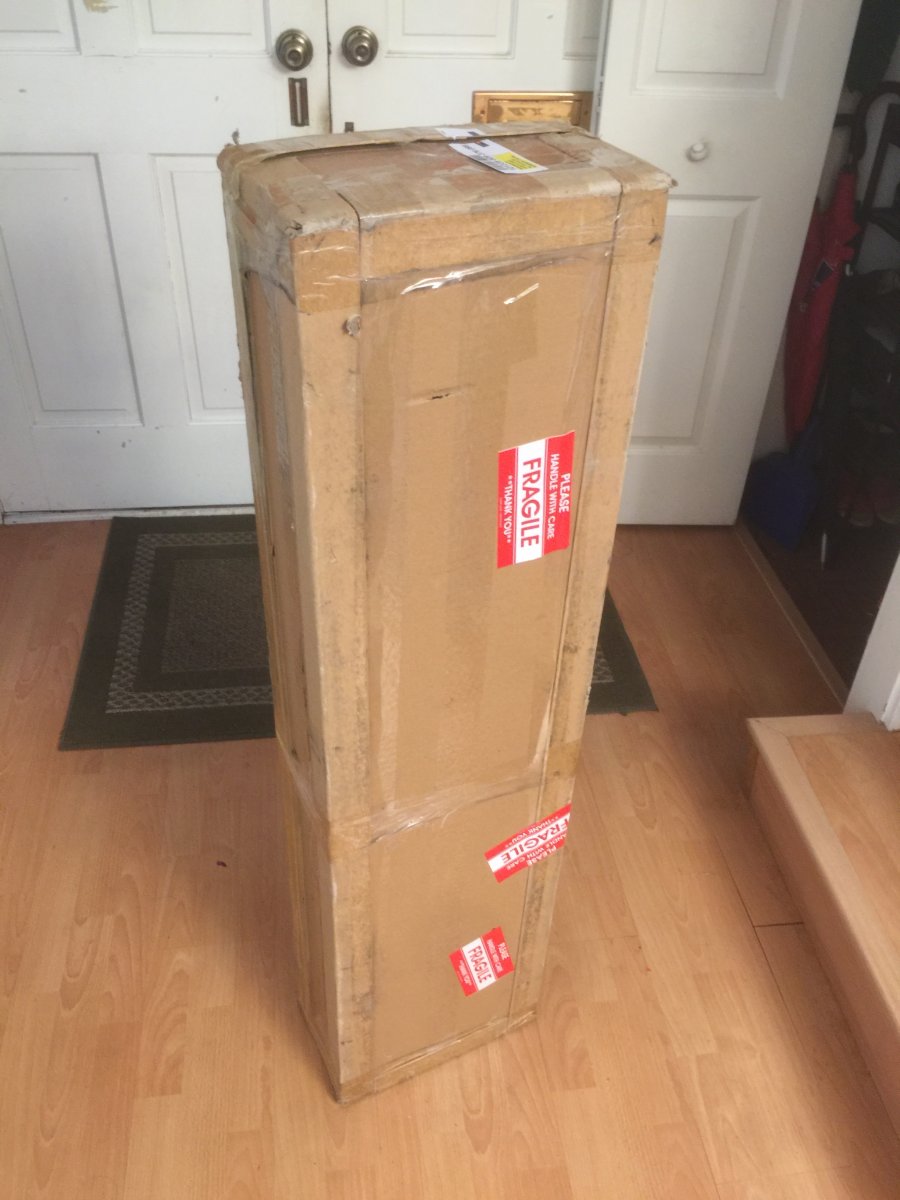 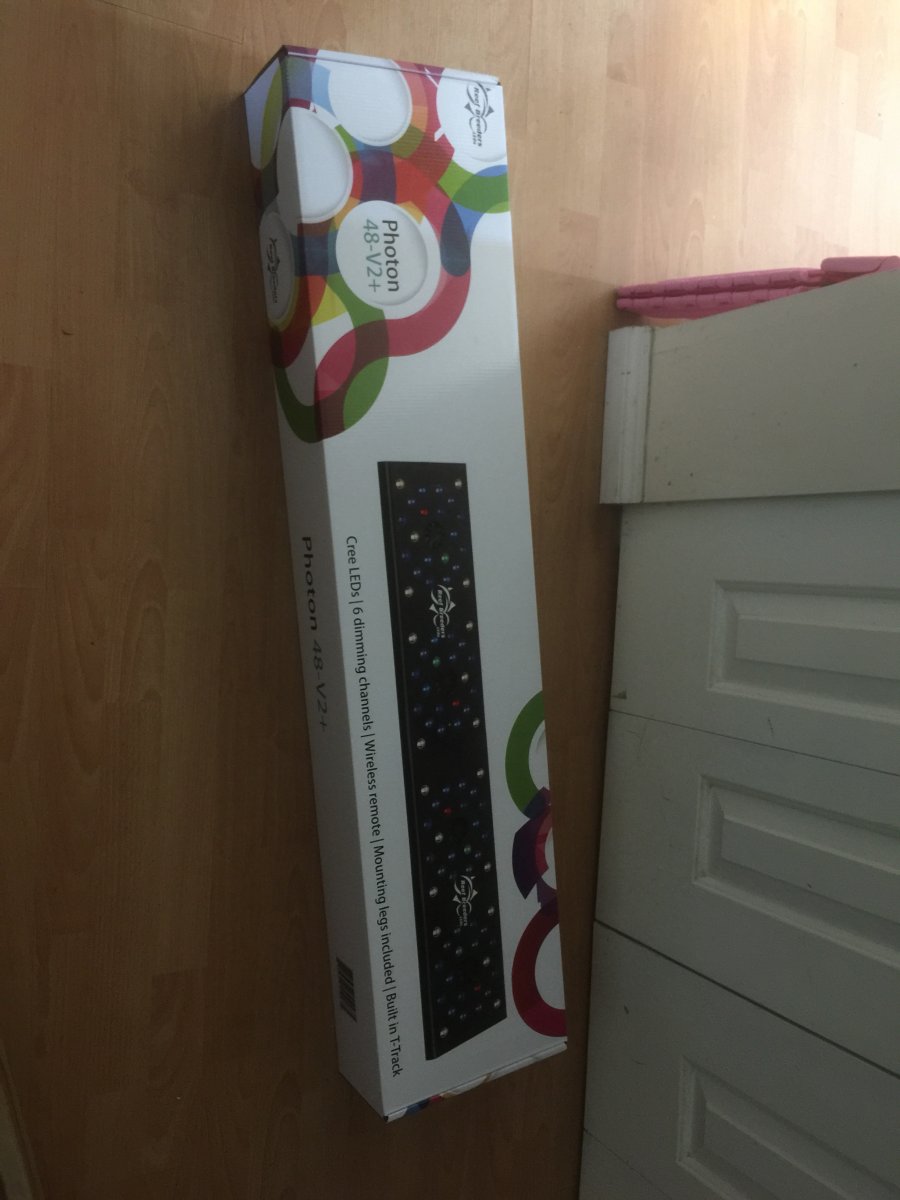 IT'S FINALLY HERE! I've got it set up and plugged in. It looks fantastic. Well worth the wait. Tomorrow I'm going to drop by the LFS and rent their PAR meter so I can fiddle with the numbers and light cycle. I had a read through of the manual in the mean time, and it seems pretty easy to use. You can only set the lights in one hour increments, but the manual says that the light splits the hour internally into 10 sections, so the light intensity changes in 6 minute intervals. Seems pretty solid to me so far.

Side note, I'm currently leaning towards red ogo and ulva for the fuge when the time comes. Does anyone know if the ulva you collect from tidepools is the same as the ulva sold by shops like algaebarn? 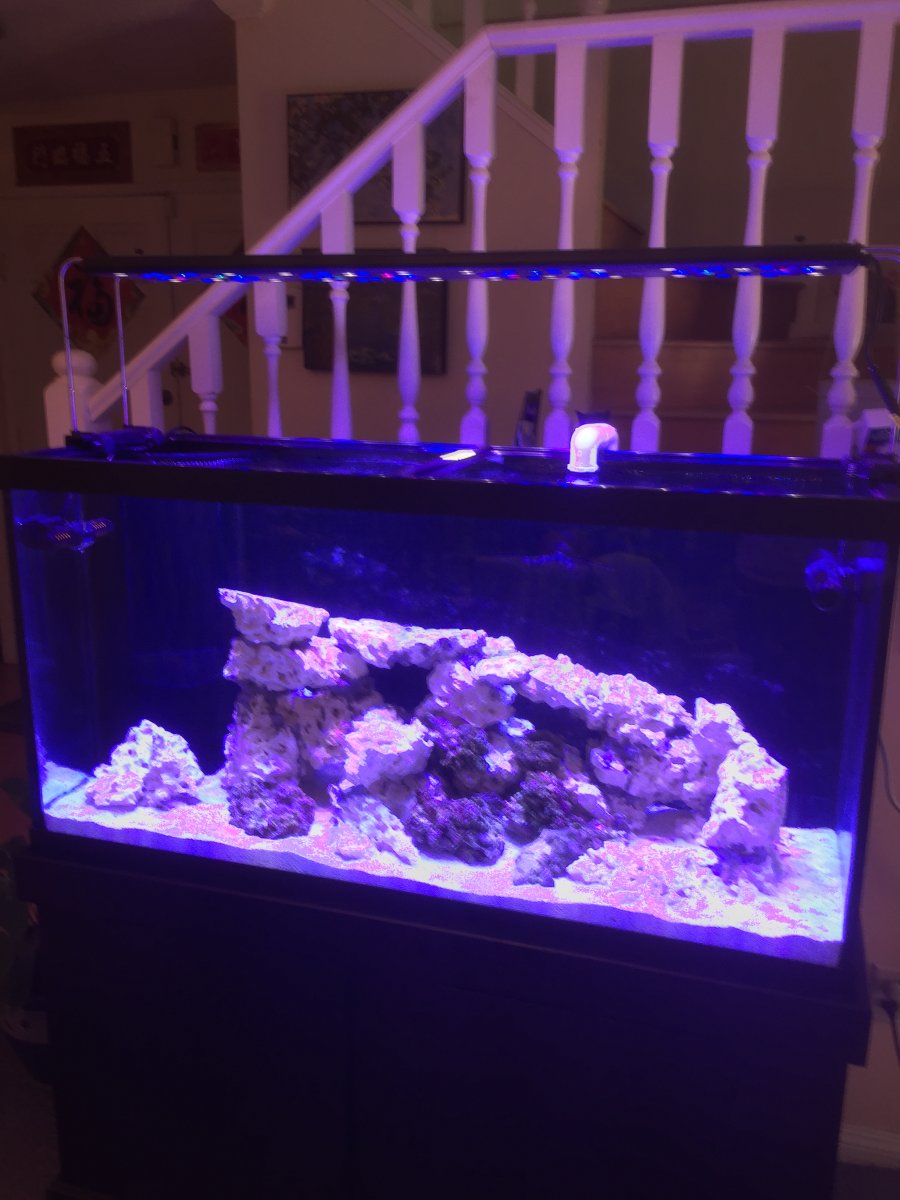 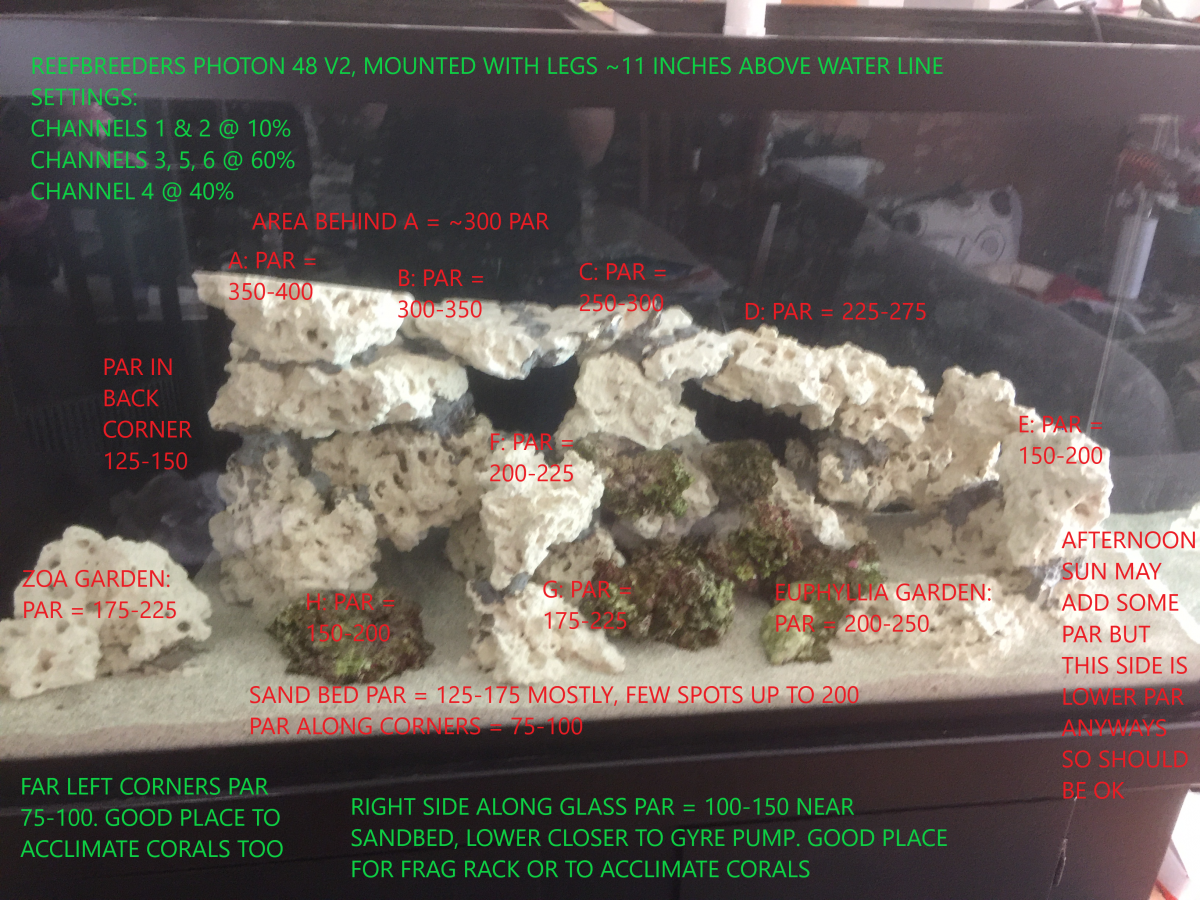 Also picked up a red sea DIY mesh top kit. I wasn't sure if the 48" one would be enough, so I grabbed the 60" one. Turns out the 48" one would've been enough. Oh well. Also used 2 of the zigzag kits. Had to use some of the tank holder things to fill out a few gaps around the light fixtures. Looks pretty good for something I made 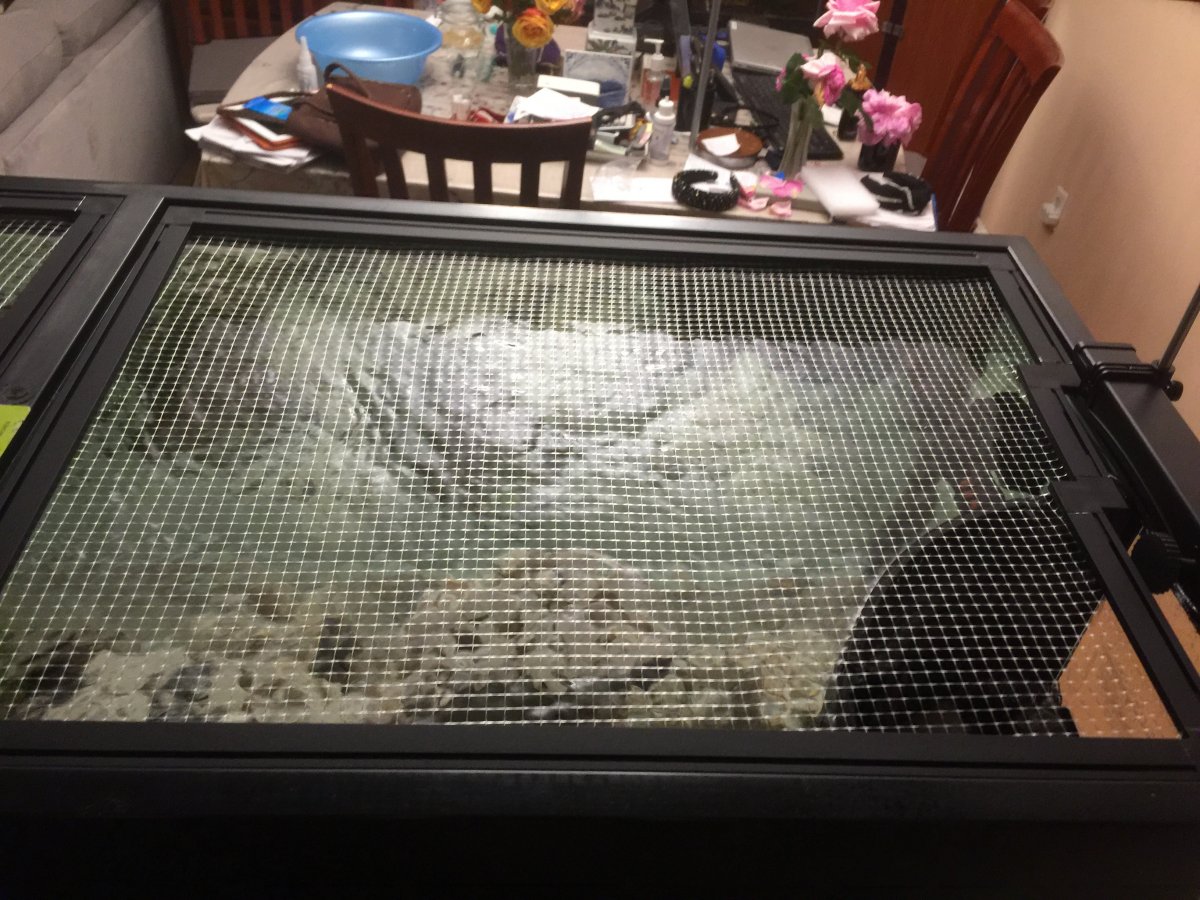 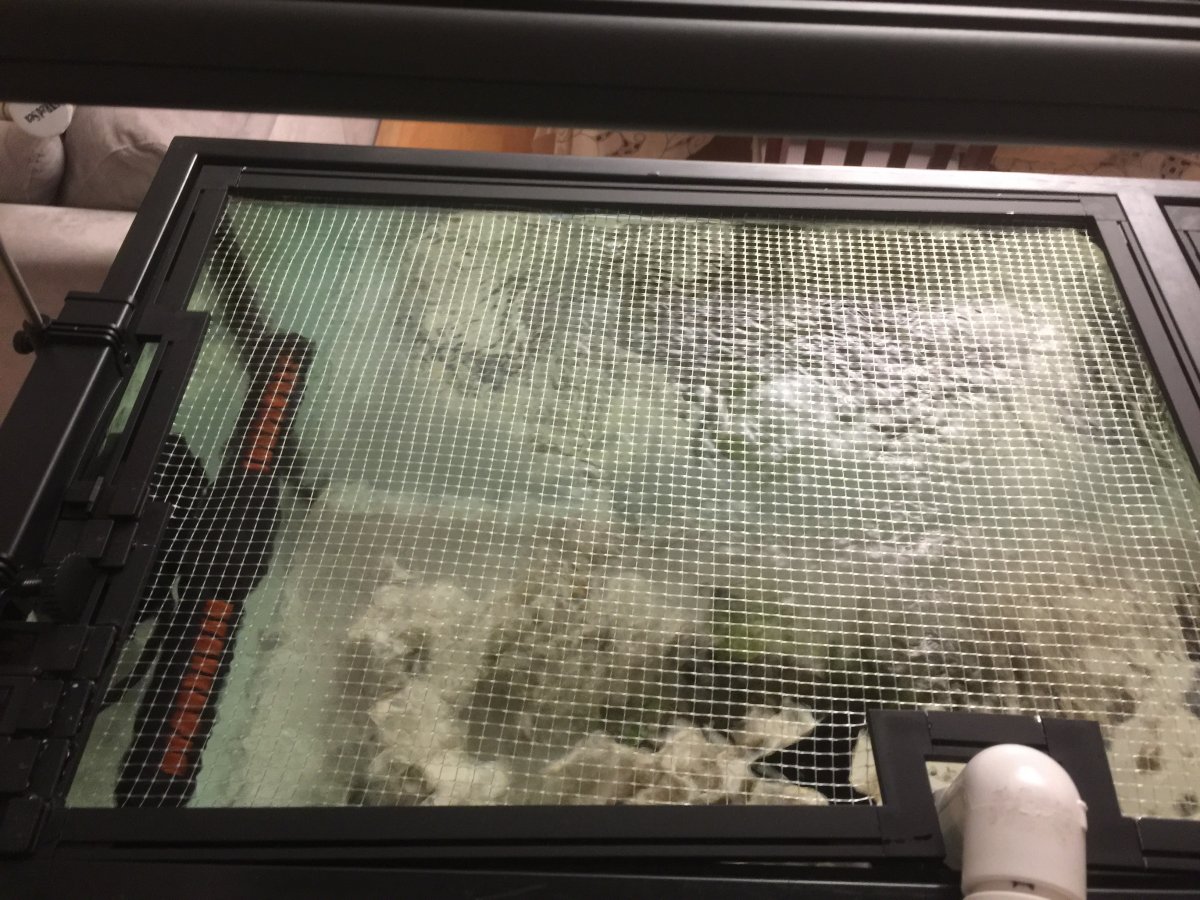 Cycle's almost done too. Added a bit more ammonia today just to get things doubly settled. Should be ready for fish either monday or tuesday

I thought that the zanzibar and gold cbs would be fine since it's a 90 gal and they're supposedly more peaceful. However, I made the mistake of adding them to the same side of the tank. The zanzibar proceeded to immediately rip the gold cbs' pincers off.

. Fortunately, they separated after that and both disappeared into the rockwork. The claws should grow back soon enough as long as there's no further aggression, so hopefully they keep to themselves from now on...

Other than that, though everything else seems to be doing alright. The tang's already swimming around pecking at the rocks. I can see the fairy wrasses poking their heads out of various caves, and the basslet has taken to swimming on its head near the back of the tank. The canary and radiant wrasses both dove into the sand, but I expect they'll be out and about tomorrow. The zoas have already opened up, and I can see some polyp extension on the acros. The trachy looks a little shrivelled still, but I expect it'll be fine in a day or two.

Side note, there's enough flow that the trachy's flesh gets moved around a bit. It's not major, but it's not completely still all the time either. Is this too much flow? There aren't many low flow spots in the tank, but I could probably find one if I need to. I'll try and get a video later if I can.

I'm going to let the tank chill and settle for a couple weeks before adding any more animals. I'll try and get some pictures over the weekend. The usual diatom bloom has come in, and I figured I'd leave it be for now so the snails and tang have something to graze on.
OP

The other fish are doing great, though. The little squaretail is like 1.5 inch maximum, and follows the exquisite wrasse around like a lost puppy. It's adorable, but I get the feeling the wrasse isn't into it. Since the tang is so smol, I'm wondering if I'd be able to add an equally tiny tomini and have them co-exist together long term? Neither tang is known to be aggressive and both max out at about 6 inches. Thoughts?

Also saw both of the shrimp out last night at different points, so that's nice. Hopefully they keep away from each other and stop trying to literally rip limbs off...
OP

Well, this has been an interesting few days... Turns out what my LFS labelled as female exquisite wrasses were actually female Lubbock's wrasses, which wouldn't be so bad if I hadn't also purchased a male from them. Wonderful. I'm going to talk to them when I go pick up more alkalinity and see if I can get a refund or at least store credit. If so, I'll have to figure out a way to catch the thing. If not, I'll probably leave it to chance and see what happens. It's extremely unlikely to work out, but hey who knows?

Well I couldn't catch the wrasse. It was too smart for me. I even tried leaving the net in the tank for a few days and then baiting the net with food. No dice. I did talk to the store though and they credited me with the difference in price, which ended up being the cost of a lawnmower blenny, so there's that. Also picked up a dusky fairy wrasse and a midas blenny, plus a pair of cleaner shrimp.

Side note, the yellow canary wrasse disappeared about a week ago, and hasn't come back out. I'm assuming it died somewhere in the rocks. There's been no signs of ammonia though, so I assume the shrimp/snails got to it. No more online orders for halichoeres wrasses for me I guess. One of my LFSs said they'd be getting some in a couple weeks from now, so we'll see.

Not much to update so far. BC's been hit by a massive heat wave, so the last few days have been spent keeping everything cool. Today should be the last day though.

BelieveInBlue said:
Not much to update so far. BC's been hit by a massive heat wave, so the last few days have been spent keeping everything cool. Today should be the last day though.
Click to expand...

same here. I live in Washington, yesterday is 114 farenheit
OP

Holy crap if somebody had a fever that high they'd be dead. We barely broke 100F (38C) here in Vancouver and that was already unbearable. I can't imagine 114. I hope you have air conditioning because I don't and I finally understood what it was like to be a scoop of ice cream.

BelieveInBlue said:
Holy crap if somebody had a fever that high they'd be dead. We barely broke 100F (38C) here in Vancouver and that was already unbearable. I can't imagine 114. I hope you have air conditioning because I don't and I finally understood what it was like to be a scoop of ice cream.
Click to expand...

No air conditioning unfortunately, as my townhouse is quite old. I made due with about a gallon of ice cream a day and a fan lol. It worked, sorta.

BelieveInBlue said:
No air conditioning unfortunately, as my townhouse is quite old. I made due with about a gallon of ice cream a day and a fan lol. It worked, sorta.
Click to expand...

lol. If the heat does happen to keep up tommorow, visit a public pool or something, maybe go over to a friends house who 'happens' to also have ac lol
OP

DweltAlloy033 said:
lol. If the heat does happen to keep up tommorow, visit a public pool or something, maybe go over to a friends house who 'happens' to also have ac lol
Click to expand...

It should dissipate, hopefully. If not, I may end up taking multiple cold showers throughout the day lol.

BelieveInBlue said:
It should dissipate, hopefully. If not, I may end up taking multiple cold showers throughout the day lol.
Click to expand...

Tank upgrade: 75 or 90 gallon, with goal of keeping Tomini or Yellow Tang
2

Tuesday at 2:30 AM
painfullycurious88
P