Clownfish laying down for long periods

I’ll start by saying i’m not some newbie that just started their tank and my first pair of clowns is dying. This is a year old tank and the clowns were transferred from a 2 year old tank when this one was done cycling. Something that’s been happening for almost a month now is that my female has been laying in different places all over, sometimes on a rock, sometimes in the sand, and sometimes on one of my leathers. It’s almost like she’s trying to lay eggs but she can’t? She usually eats, sometimes less than usual but usually at least eats a little bit. But for the love of god this clown has been stressing the heck out of me. Is this some issue with her not being able to lay eggs or is it possibly some internal parasite? To preface fish background a little more all of the things in my tank currently went through a 76 day QT after I had a velvet outbreak that killed 2 other fish I had. This happened 4 months ago and it never showed back up after, neither of the clowns showed symptoms of velvet either, I caught it fast enough. So i know there’s nothing in the way of externals, especially when she looks just fine.

My levels have checked out

Should i treat for internals just in case? I have prozi on hand, but I haven’t seen any white poop. I’m at a loss to what her issue is but she been doing this for a while and I would’ve thought she’d been dead by now if it were something that bad, but you never know. Any suggestions welcome. 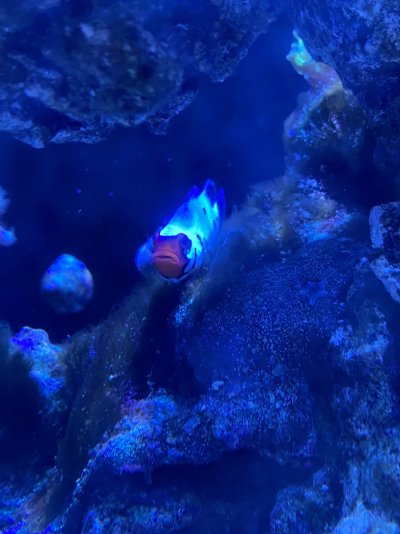 Can you post a short video, taken under white light? What other fish are in the tank with it?

Jay Hemdal said:
Can you post a short video, taken under white light? What other fish are in the tank with it?

Yes, as soon as she starts again I will. Since i posted this she hasn’t been doing it. But like i said, it’s an on and off again sort of thing.
P

Clowns do some time rest against things,mine lays down in bottom of the sum

Clownfish resting or something worse?