Contest of the Dwarf Angels: Which One to Choose?

So, I’m in the late stages of my stocking plan and so far I’ve decided I’m going to go with an Ocellaris pair / Black Ocellaris (captive bred), a basslet (most likely Royal Gramma because it’s too hard to find a Swissguard in China, some dealers sell the Swales for about a similar price so maybe that’s an option too, Yellow Assessors are too hard to come by), a Yellow Watchman Goby and Pistol Shrimp, a Talbot’s Damsel / Azure Damsel, and a dwarf angel.

What’s causing me the most headache by far is getting the dwarf angel. I can’t really make up my mind about which one to get. I’ve had a look at some species that would probably work in a 3-foot, 36”x24”x24” tank, and I have narrowed it down to the following species:

1. Coral Beauty-By far the cheapest out of all the dwarf angels. Many people say they’re among the easiest if not the easiest to care for, but 1 or 2 have mentioned that those from the Philippines or Indonesia warrant caution. I don’t know where my CB will be from but it’ll be wild caught from Southeast Asia.

2. Flame Angel-I think it’s got stunning colors, but many people have said it’s not quite as hardy (though still one of the hardier ones?) as the CB and that specimens collected from certain place tend to shop very poorly.


3. African Flameback / Atlantic Cherub / Brazilian Flameback-From what I’ve heard they’re just as hardy as the CB and they only get to 3”.

4. Multicolor Angelfish-By far the priciest out of all the options I’m considering, but I think it’s beautiful and from what I’ve read it’s fairly hardy too.


5. Half Black Angelfish-Not too pricey, and from what I’ve heard one of the hardier ones too.

6. Rusty Angelfish-Its color scheme is so so, but again I’ve heard it’s one of the easier ones.

I know that no matter which one I choose, it’ll have a semi-aggressive temperament. However, I’m really looking for the hardiest one that can deal with a new system that’s not fully established yet.

Of course, I’m also looking at compatibility with the other fish I plan to include. My plan is for the angelfish to go after the basslet, but before the Talbot’s / Azure Damsel.

I would appreciate suggestions on which one to pick for my first angelfish, you can even suggest something I haven’t mentioned. Thanks.

Another thing I really like about angels is their long lifespan. If I choose CB, Flame, one of the Pygmies, Half Black, or the Rusty, I will have more control over the size of the fish because some dealers put the size of their fish while others don’t. If I pick the Multicolor I won’t know how big it is (though I may be able to request them to give me one as small as possible).

I’ll buy them as small as possibly (4-7cm) because I want to see them grow and live long. Preferably 4-5cm.

*Edit: Make that two Chrysiptera damsels. Either two Azure or two Talbot’s. I will be introducing them at the same time. However, I am worried they’ll fight with my Clownfish pair which will be established by then.
Last edited: Mar 26, 2020

from my experience the Azure are nice fish I only have one for a few years no problems at all perfect bright small fish. not sure how 2 will do tho?

now on your question of dwarf angels.
I have had both the CB and the flame both are hardy and great colors to bad they cant be mixed eh?

not of dwarf angles they are corals nippers I have seen my flame do it offten but no real damage. all tho my fish have been in a corals less system for the last 8 moths getting ready for a big move and upgrade)
any dwarf you get there is a chance of coral damage so have a back up plan.
i would get as small as you can and go with the CB or flame. 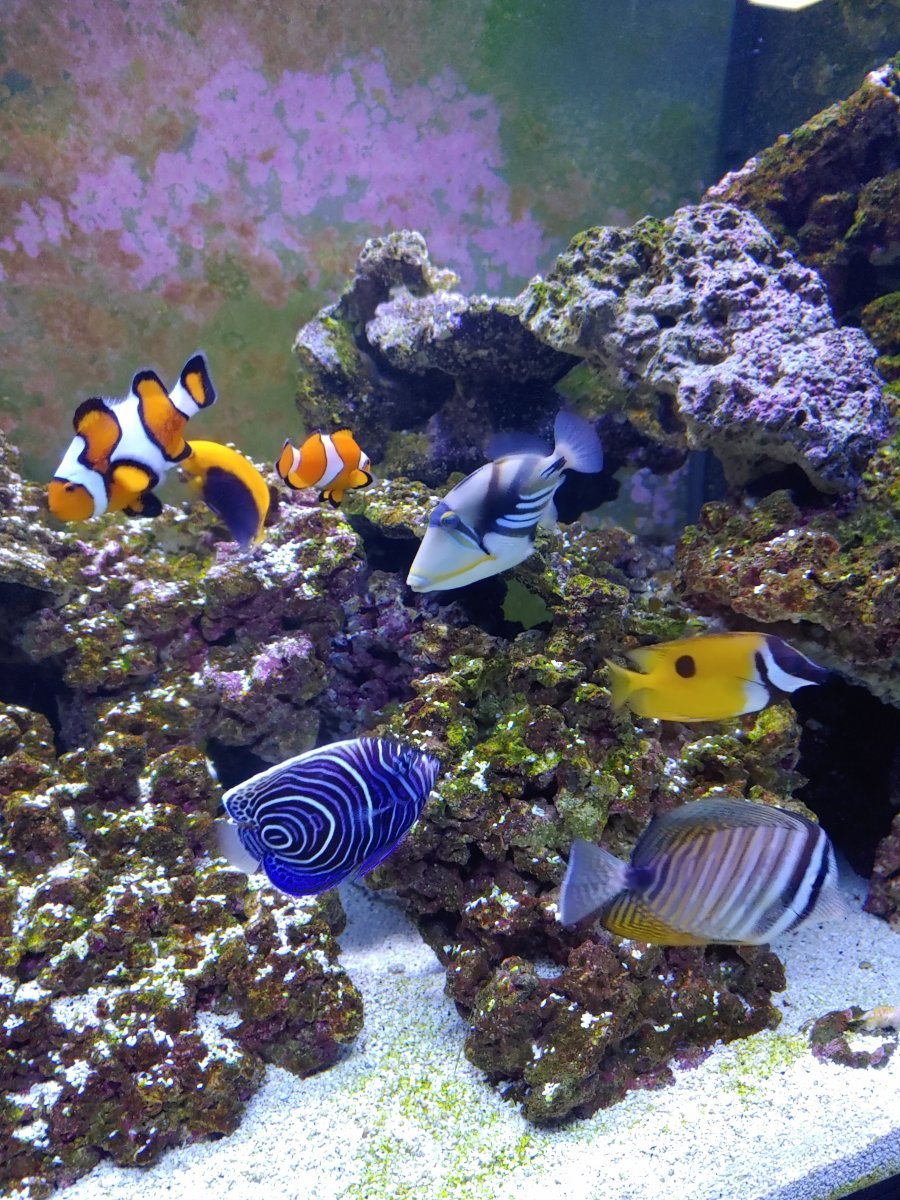 I have a bicolor that has an excellent tank citizen. 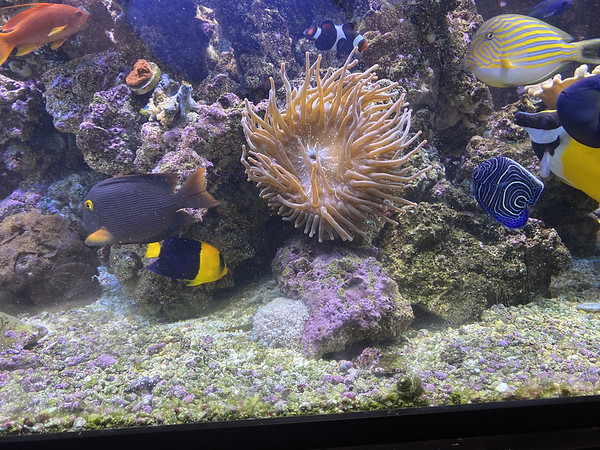 I love flame angles. Stunning beauty. I have been lucky with the ones I have had not messing with corals. However, I think mine have not lived much more than 5 years in my tanks. So, maybe they are not as hardy as other fish.

How long can we typically expect the 4” angels and the 3” Pygmy angels to live? Do the pygmies have shorter lives than the 4” dwarf angels?

Interruptus if you can find a reasonably priced one. If not go for the Biota captive bred Coral Beauty.
OP
Z

If only I could get a captive bred one. Unfortunately they’re not available in China at the fish retailers. Should I be very concerned and wary of getting a wild caught one?

Depending on the collector and the methods they use to collect the fish would be the biggest concern. Along with condition,size and health.
OP
Z

I guess my best hope would be to buy from a trusted dealer. Most of the saltwater fish for sale in China are collected from Indonesia and the Philippines, with a few from Australia or Hawai’i or the Caribbean / Eastern Africa. Maybe South Asia too.

So far the dealer that’ll be helping me set up my 85-gal tank seems trustworthy. When I wanted to get a butterfly he strongly advised against it, telling me that on average they’re the hardest group of fish to keep.

Zionas said:
I guess my best hope would be to buy from a trusted dealer. Most of the saltwater fish for sale in China are collected from Indonesia and the Philippines, with a few from Australia or Hawai’i or the Caribbean / Eastern Africa. Maybe South Asia too.

So far the dealer that’ll be helping me set up my 85-gal tank seems trustworthy. When I wanted to get a butterfly he strongly advised against it, telling me that on average they’re the hardest group of fish to keep.
Click to expand...

Yes, depending on the butterfly they can be difficult to feed in captivity and most are susceptible to bacterial infections.
A

I enjoy pairing angel fish in my tanks. My favorite pair was my African Flameback pair. I currently have a mate pair of flame angels in my tank. My vote would be flameback then a flame.

Lemonpeels are cool, if you don't have coral.
OP
Z

You can't miss with a Flame angel pair. Beautiful graceful and their flashiness is just second to none, well maybe Peppermint angel (but who have $60,000.00 for a pair, certainly not me). Just get two small one and they will grow and form a pair. Their spawn dace is soo beautiful and graceful. 85 gal is just perfect for a pair or a harem of three.
I have video of my pair spawned in my 65 gal tank on YouTube somewhere.
Here are a few pictures of my Flame angels.

Nuptial color Male. I think this is why they are call Flame angel. I thought he was on fire. 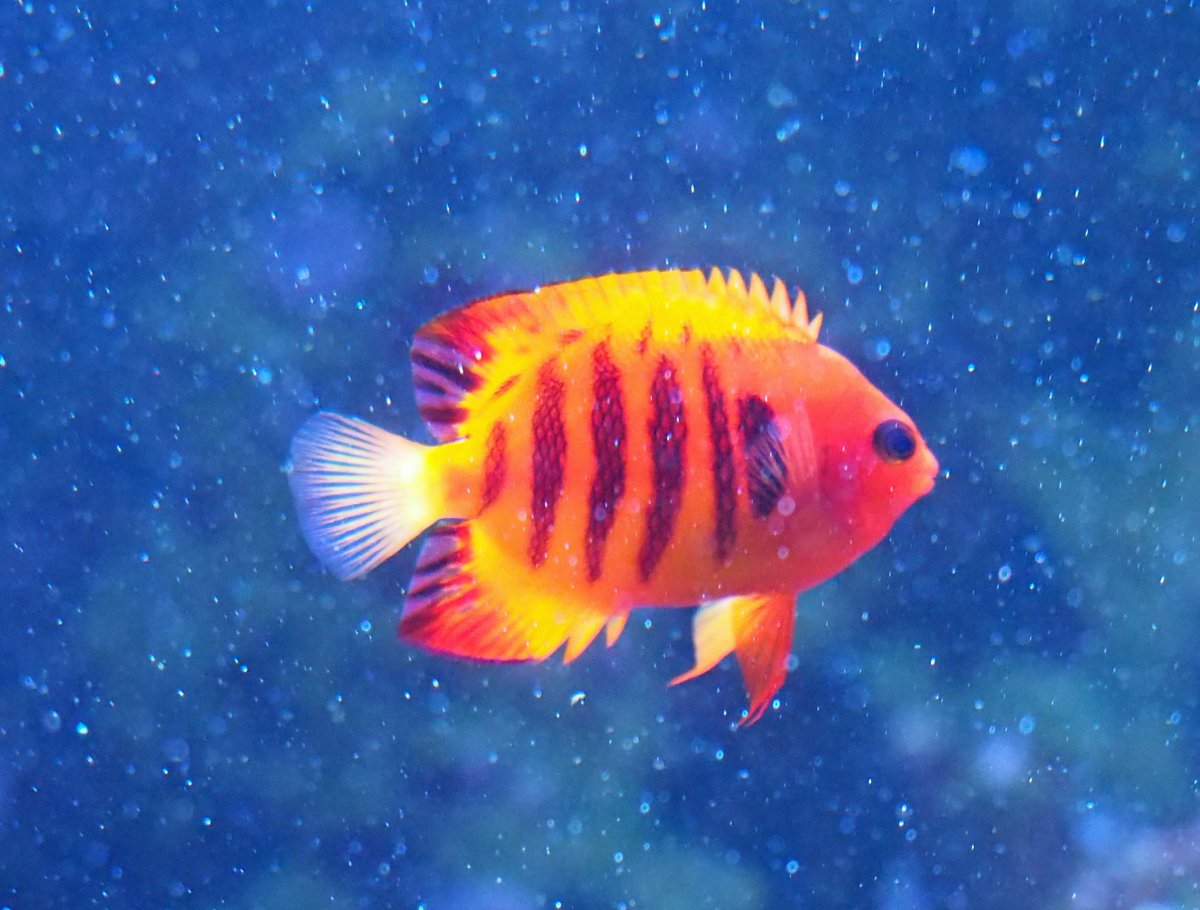 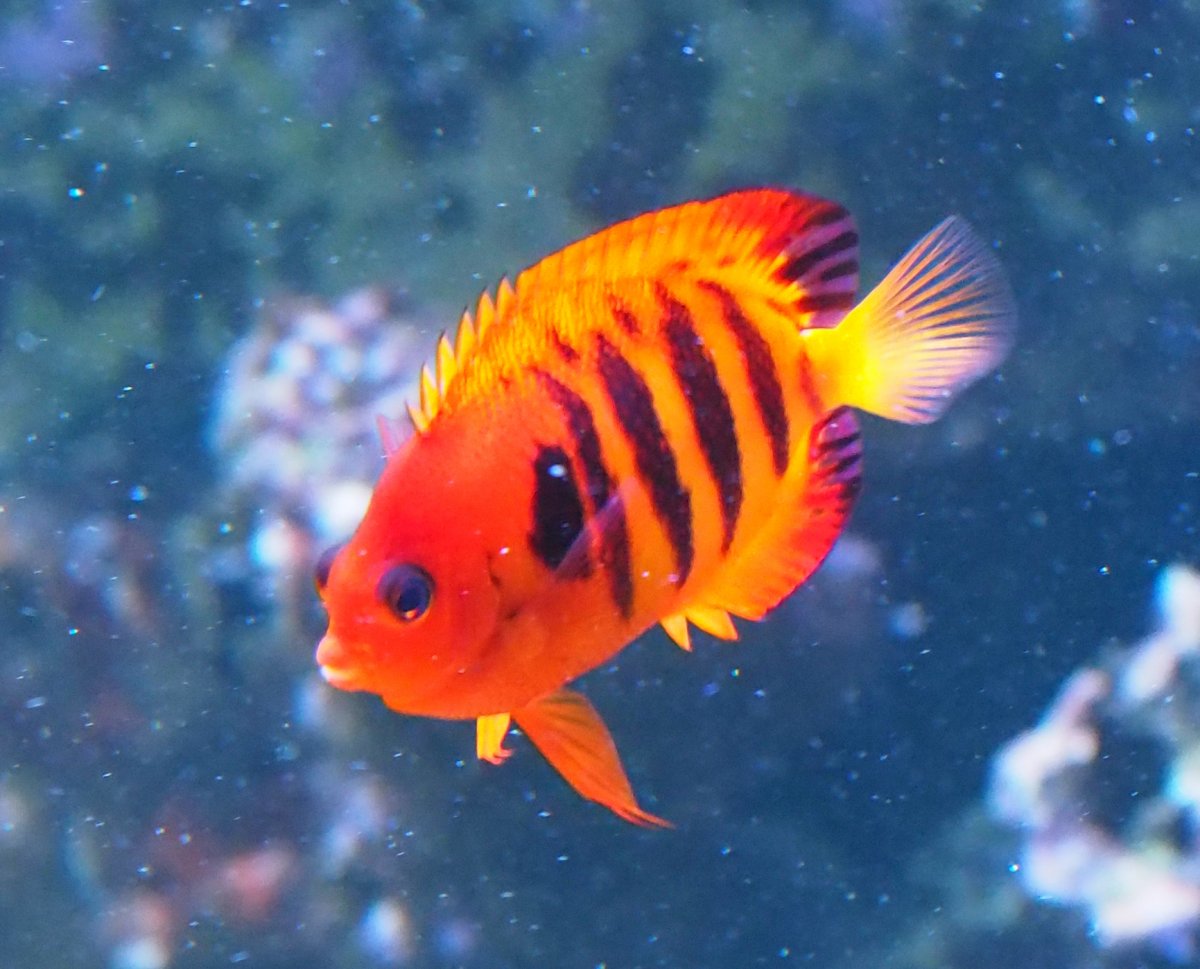 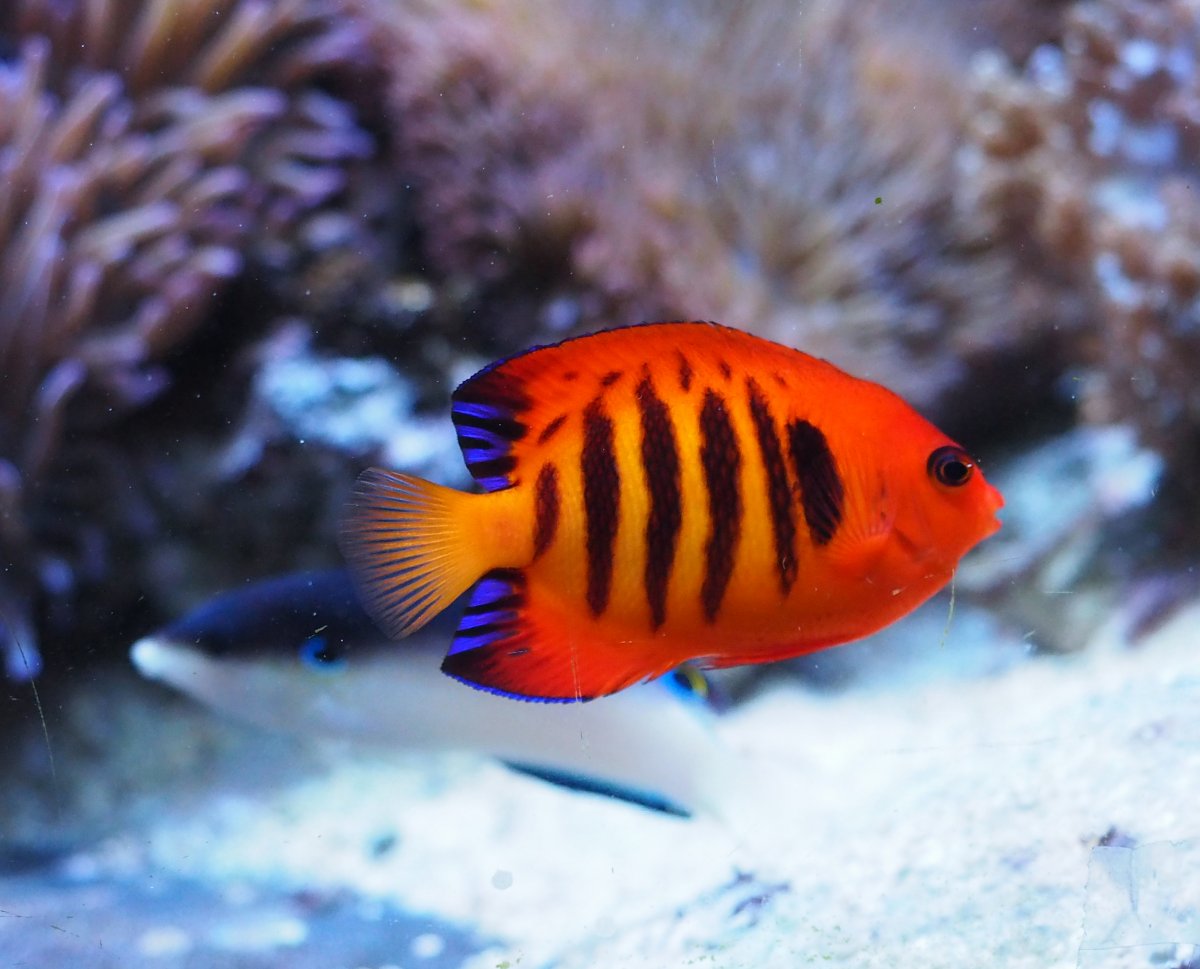 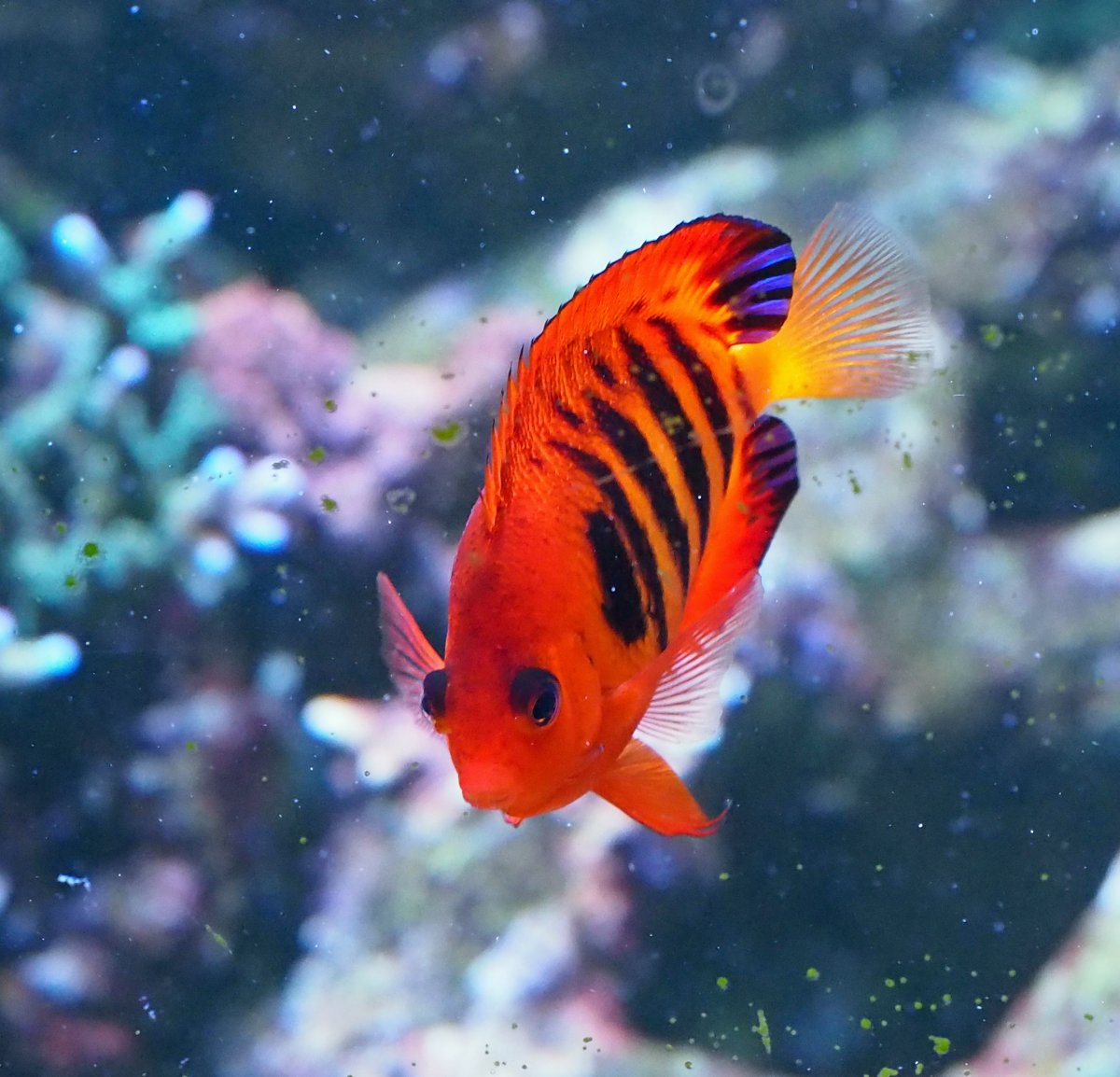 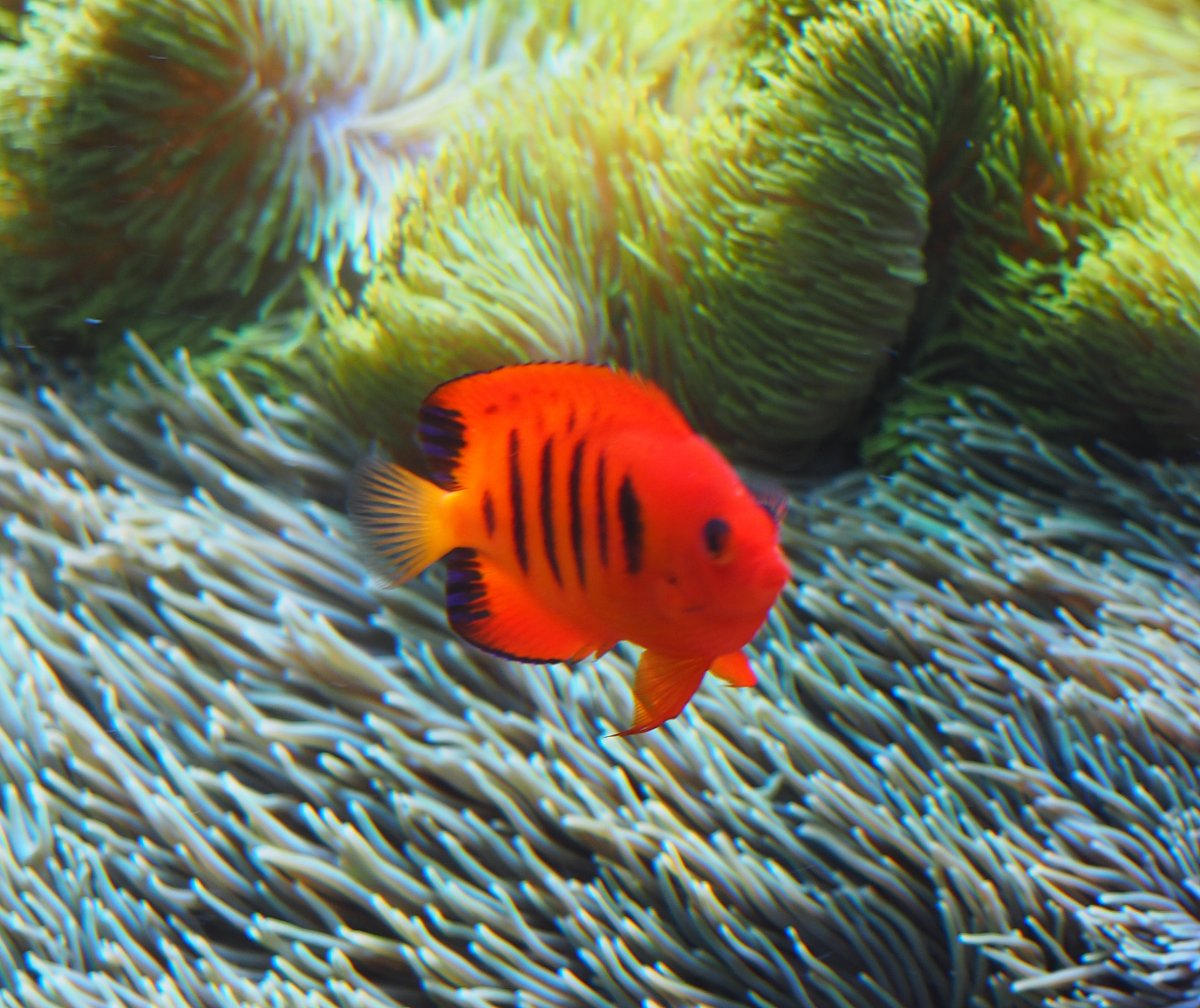 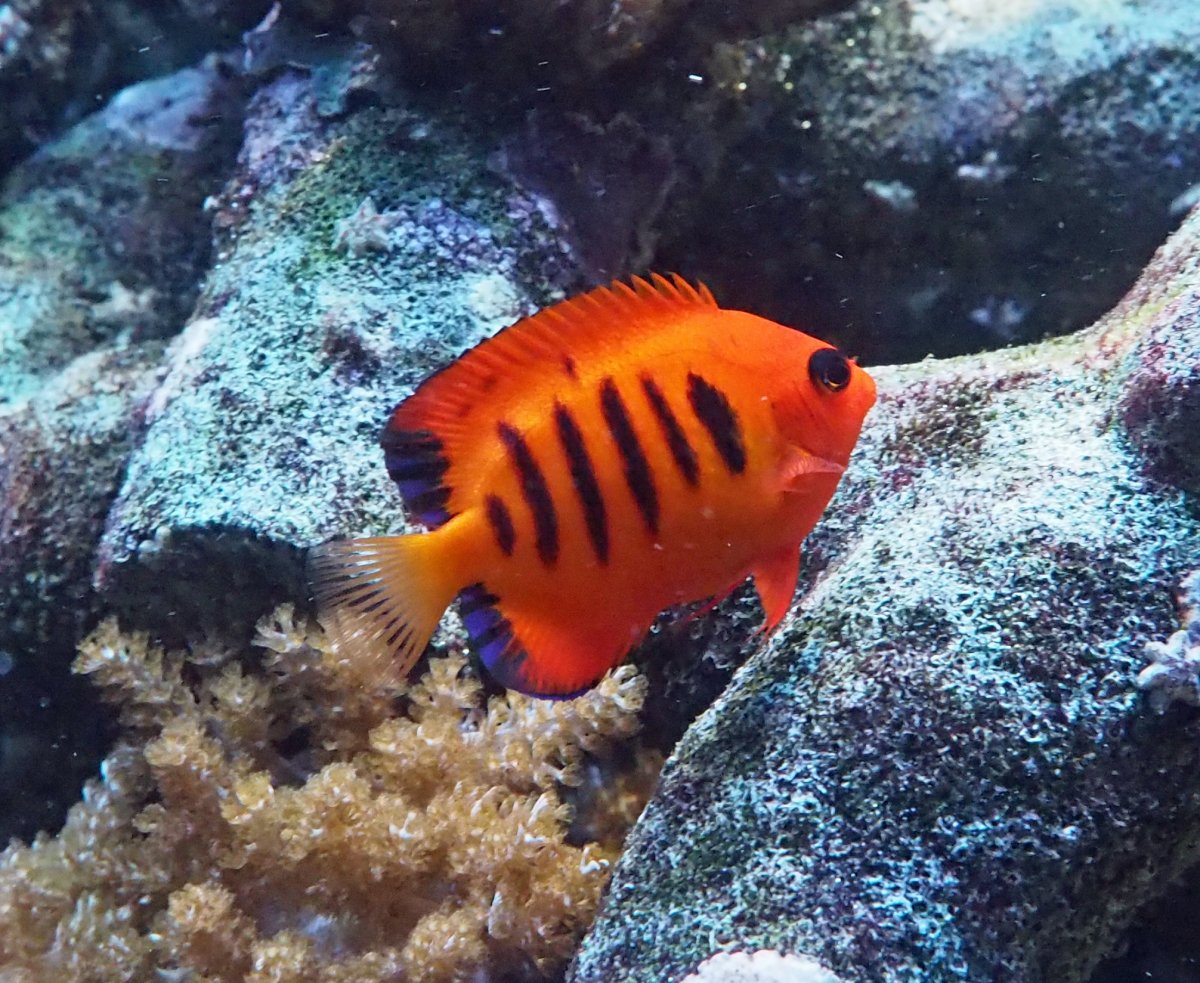 If I could only have one angel it would be a flame. That said I currently have a flame, african flameback, multicolor, bicolor and have had most of the dwarfs at one point or another. I always suggest picking what you want and adding them all at once to cut down on aggression. Its tough trying to add one when you have others. I had a mysterious illness that wiped out all my angels maybe a year ago and added these all at once. My other favorite a Potter's didn't make it but eventually I'll squeeze in another. If you can find one I really like orange peel angels or even a lemon peel. The one fish I was happy to see go was my coral beauty. Out of the dwarfs they are most likely IMO to end up being the tank monster. A few years ago I had mine kill a golden argghh.
W

I'm going to throw my vote behind the flame as well, I have a captive bred one and it is a great fish. I'm a fan of seeking out captive bred fish if they are an option and there are a few dwarf angels that are available now.
OP
Z

Unfortunately for me, I won’t be able to get captive bred for any species of angel because they’re not available in China right now. I know this may be strictly anecdotal, but is it generally true that specimens caught in certain places should be avoided?
F

Got to go with the flame as well. I've had mine for almost 10 years now. He is the boss of the tank but I think it keeps everyone else well exercised. Even my 5" sail fin, yellow and regal tangs play second fiddle. He did take out my CB that was added at the same time. I was hoping a 240 gal would be enough but I guess he didn't like the potential competition. He's got quite the personality and makes sure every one knows it.
OP
Z

I’d appreciate it if someone could make a ranking of the dwarf angels from most hardy to least. Are they all (even the pygmies) capable of living 10+ years?

Also, I came across two new species: the Pacific Pygmy (which sells for very cheap) and the Fisher’s (which is the most expensive right after the Multicolor, on par with the Flame).

African Flameback / Atlantic Cherub sell for OK prices with the latter more expensive, while the rest sell for just a bit over 10 USD.

Which ones can thrive in a newly established system?