3/2013 I started my in-wall 320 gal with a small fish room behind it. My Reef was a mixed reef with anemone reef with lots of anemones, SPS and LPS. A special animal was an almost 20 year old T. gigas that was 28 inches long.
I did everything I can think off, spare no expense, to disaster proof my system. Then came Hurricane Harvey. As prepared as I think I was, there was one contingently that I did not think about, and that was what happened.

Somebody came and turn of my automatic generator after the hurricane while we were evacuated and 300 miles away. A friend came and check on the house and the tank for me after the hurricane. Everything were fine, the house was undamaged but out of electricity. The generator was running fine. The tank was in great shape, no problem. I did not think much about the house or the tank after getting this news and was not in a hurry to get back home due to medical emergency with one of my brother, who had a huge stroke and in a coma, in Austin.

When I got home a few days later, some one have turn off the generator by close the natural gas valve that supply gas to my generator from open to close. The generator shut off due to lack of fuel. Why I am not sure. I just hope who ever did not did not do it out of malice.

All my fish were dead, except some of my clowns. All my SPS was dead or beyond saving. My LPS were either dead or very stressed. All of my anemones were stressed or dead. My 28 inches T. gigas was near death.

Working almost though the night with friends help I was able to move and save almost all of my anemones, most of my LPS and my clowns. The SPS were almost total loss. Even trying to get my large Gigas to Texas State Aquarium here in Corpus Christi did not save my Gigas. They just have their power back on that night and did not have the manpower or equipment to pick up the clam that night. The curator promised to puck him up first thing in AM, but by then he went to the great reef in the sky.

As off today, 9/9/2017, everything settled down a little. My brother passed. All the funerals event finished. Life goes on. His family financially will be fine with all his saving and 401K. The two children are older and are adults. Emotionally, I hope we all will be OK after some time.

Hurricane Irma having Florida in the cross-hair. My heart go out to all the people of Florida, especially all the reefers and their reefs in Florida and the Caribbean islands. Best of luck to you all. Be prepare as best as you can is all you can do.

Back in Corpus Christi, I have not clean out the aquarium. After removed a lot of the animals that survive the initial crash and dump in a bunch of Prime I have not done anything other than have the tank on auto-pilot. the tank slowly deteriorate with the break down of all the dead animals not removed. There are minor frags of LPS still in the tank. These did not do well and will not survive.

The good news is that all my anemones short of Malu and LTA survived. I still have all my Haddoni, Gigantea and Magnifica and all of my LPS. Over the next few weeks, I will remove all the LR and LS and recycle them. I plan to put everything is fresh water, and maybe acid wash to leach all the phosphates that may be bound to the surface of the rock. I then plan to put these rock into the Corpus Christi bay for several months to re-seed them and then start my tank again. Sand will be discard.
In the mean time, I will empty the tank and redo some of the plumping and sump, together with adding refugium and frag tank.
I will avoid a too deep sand bed. Just use a very deep sand bed in the refugium where I can do better management of it than in the DT. I will avoid adding Malu and LTA into my DT in the future since I will not have a deep sand bed. I am not sure about Haddoni, since I till have some very nice Haddoni.
It again will be a Mixed Reef. I will not attempt to have huge Clam again but will only get a few Crocea, Maxima and some nice Squamosa. These will get large but not anywhere near as unmanageable like my Gigas.

I will try to document my rebuild progress here also.

BTW, I am in the process of install a valve with lock so someone cannot easily turn it off. I will also lock my generator so they cannot access the control panel either. I posted about someone turn of my generator on my 'neighborhood web' mailing list. Some one PM me about gas smell near my house after the hurricane. This email "speculate" that the person that turn off the gas was worry about a gas leak. The email did not admitted that he was the one that turn it off which I guess I would not either given the damage and lost of life resulting from this action.
As it turn out, one of my neighbor empty house, and elderly couple who recently moved to the senior assisted living, had tree fall damage that cause a small leak on their gas line.

We can planed all we want, but things sometime can really throw a curve at us. I don't think anybody can plan for this contingency, trying to do things to protect their tank/house. Hind sight, maybe I should. It really does not cost much. I plan to put a tag at the valve, clearly state that this generator is for life support, and not to turn off. Also I will put my phone number on this tag so that concern citizen will need to contact me if any problem. This will not stop the maliciously motivated saboteur but hopefully I live my life in such a way that I don't have to worry about this.

My condolences to your family.

Been following your systems for many years, you are more than up to the challenge and I look forward to the results.
OP

Two anemones that I will add into my reboot tank.
My blue Gigantea 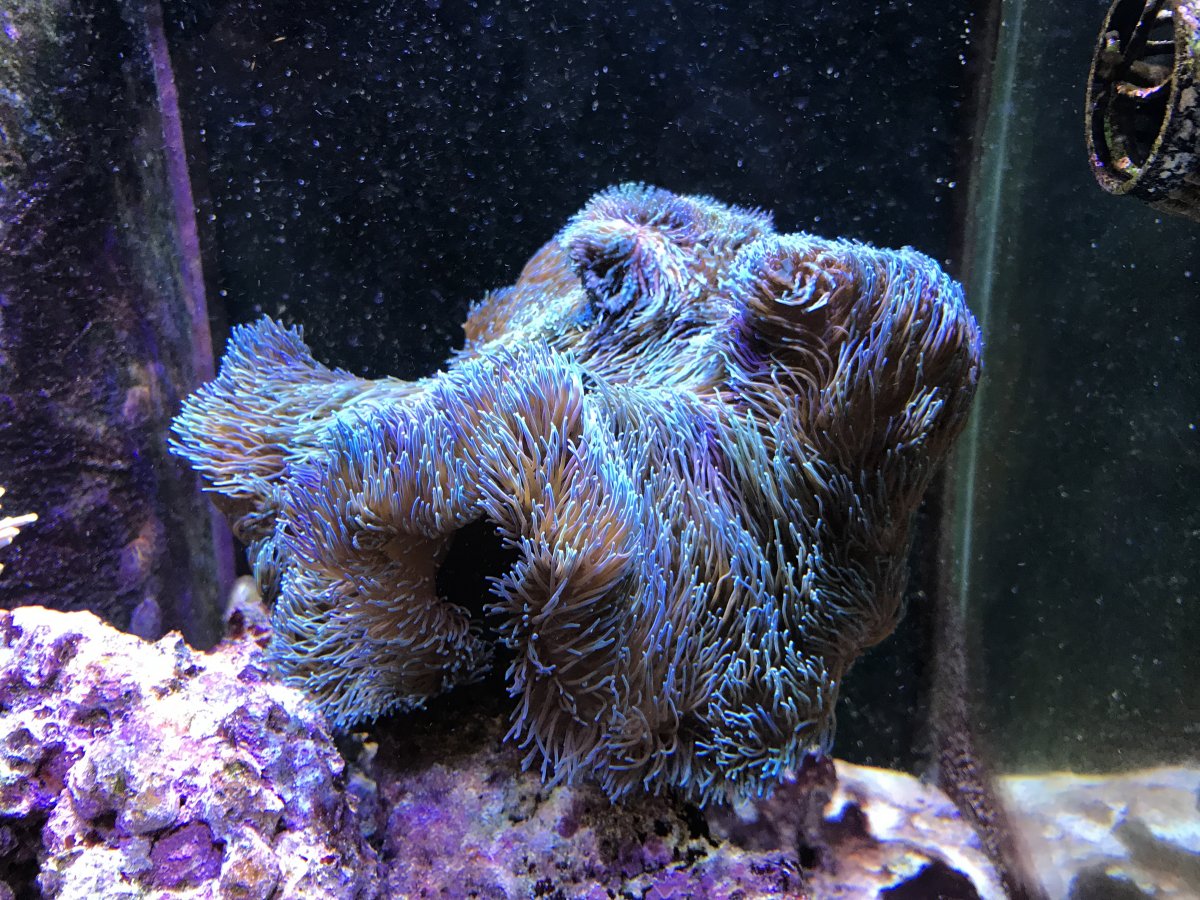 and my Purple Magnifica. This Magnifica recently split. There are two Mags in the picture below 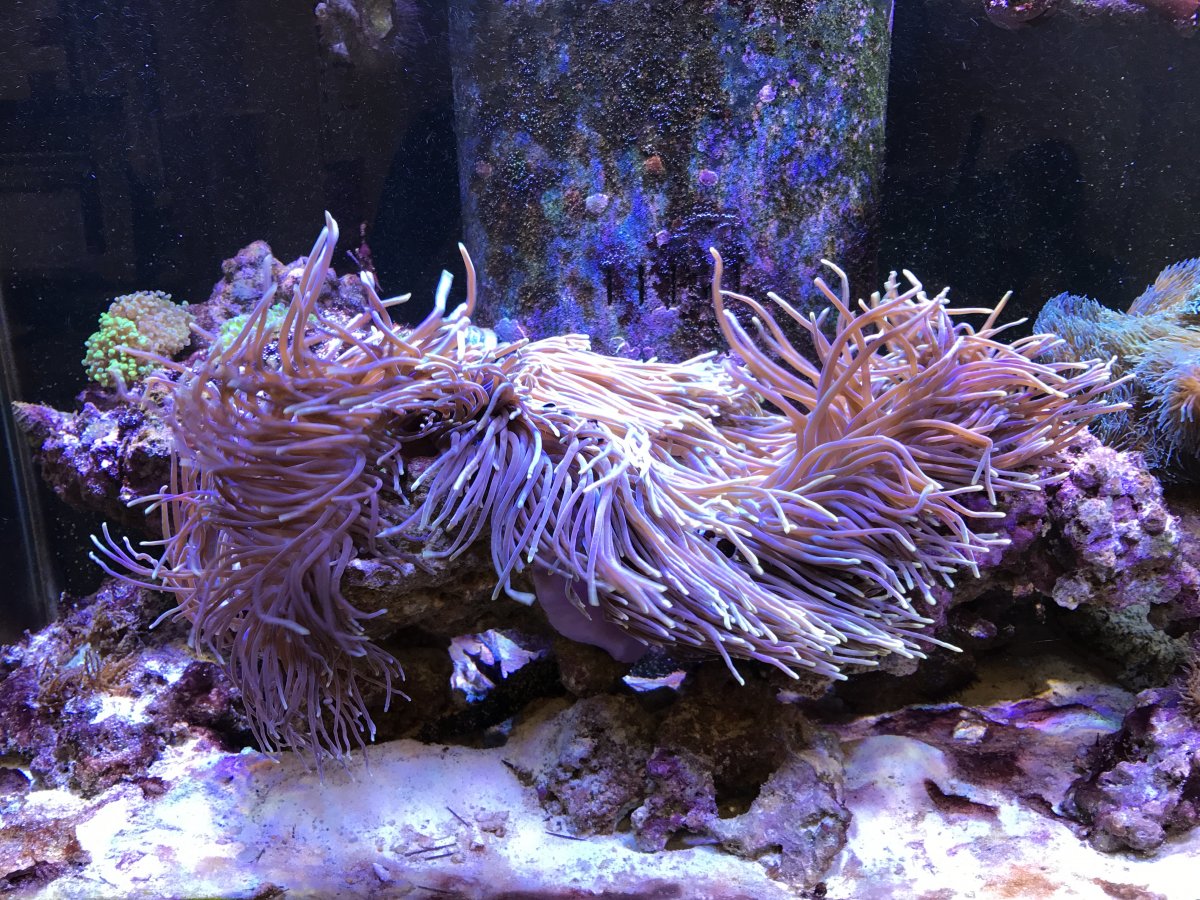 Dang! Man, I'm so sorry for your loss. I'm also sorry that on top of everything else your tank had the catastrophe it went through as well. Looking forward to good things ahead in the rebuild.

Really sad to read this, we were not hit as bad in Austin as you were on the coast. If you need frags to restock I think several folks in Austin might be willing to donate, myself included.

Thanks guys. I am cleaning the tank this weekend.

Wow! I'm so sorry to hear. Lots of loss. I'm glad you're doing a reboot, and hope all goes well moving forward. Best wishes to the family!

Wow! I'm so sorry to hear. Lots of loss. I'm glad you're doing a reboot, and hope all goes well moving forward. Best wishes to the family!

I feel terrible reading this. Really sorry to hear. Been following your tanks and anemone advice for years both here and on RC. I guess there is no way you will ever find out who did it.

How is the Reboot going? Looking forward to any update.

Really getting close to filling it. I got all my rock in the Corpus Christi Bay. Got the tank re-plumped, collection all the equipment's I needed. I am doing a little change and clean out the fish room to get more room. I don't plan to breed any more clown fish so I am trying to set things up with QT system and Frag tank in mind.
Here is one of the fish that will be in there. 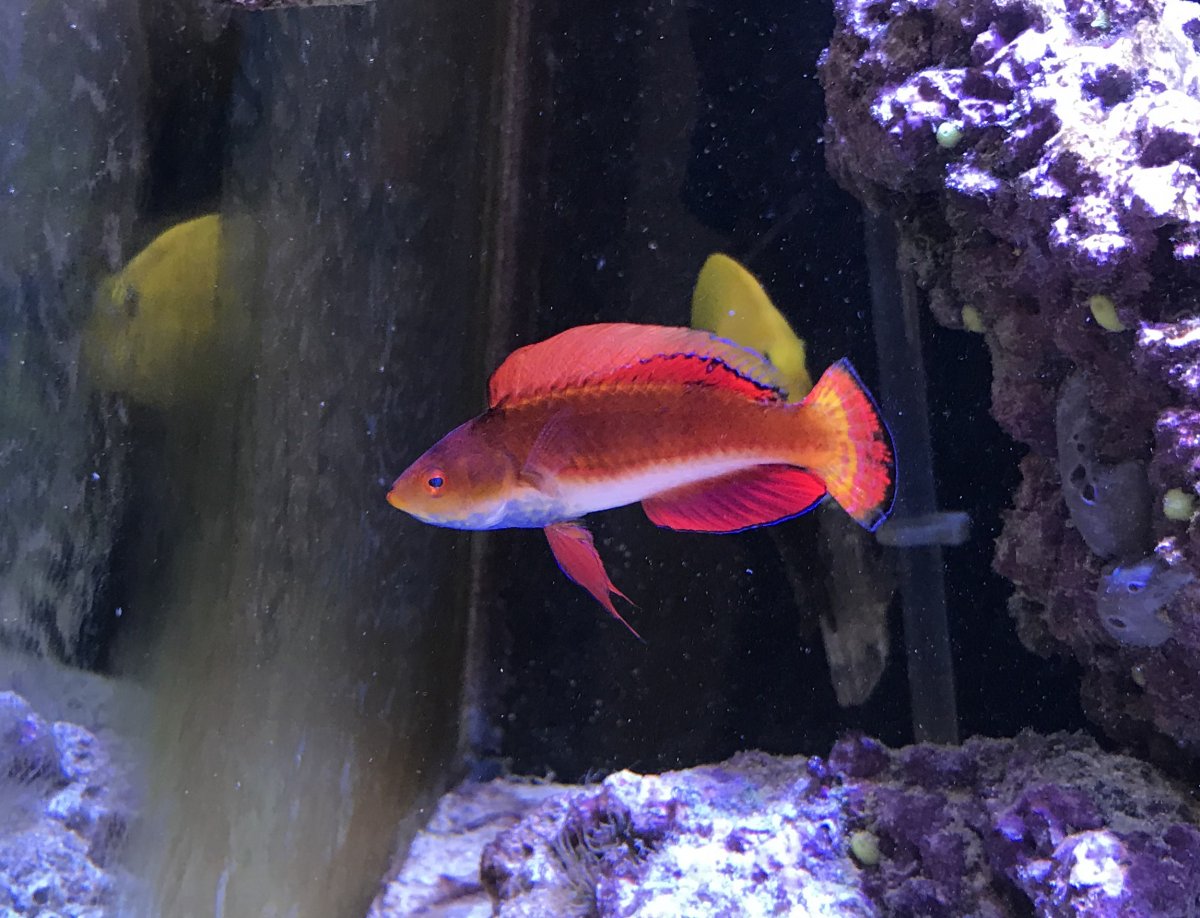 Glad to see things headed in the right direction...looking forward to updates. Did you lose any of your nems?

Thrilled to see you moving a head. Will you have a different focus than clowns and anemones?
OP

I am going to have a lot of anemones still but I will plan it so that I will have quite a few SPS and a few LPS also, and clams.
I guess it is going to be a high light mixed reef with emphasis on Gigantea and Magnifica, my two favorite reef animals.
OP

My tank have been doing well. I was not able to cordinate with my friend to bring my animals home even if the tank is ready for them for a while. Here is the FTS a few days ago. Just one SPS, One Soft coral and 1 clam. Te rest are fishes and LR

So all nems are alive and well? If so, excited to see this tank back in its full glory!
OP

Setting up my tank, I got Wrasse fever really bad from this Blue throat Fairy Wrasse.Too bad he was really aggressive toward other fairy and flasher wrasses. He was really gorgeous fish however, due to his aggressiveness, I have to return him to the LFS. He would not leave my Laboutei alone. There was just non-stop battle betwen these two fish for weeks. 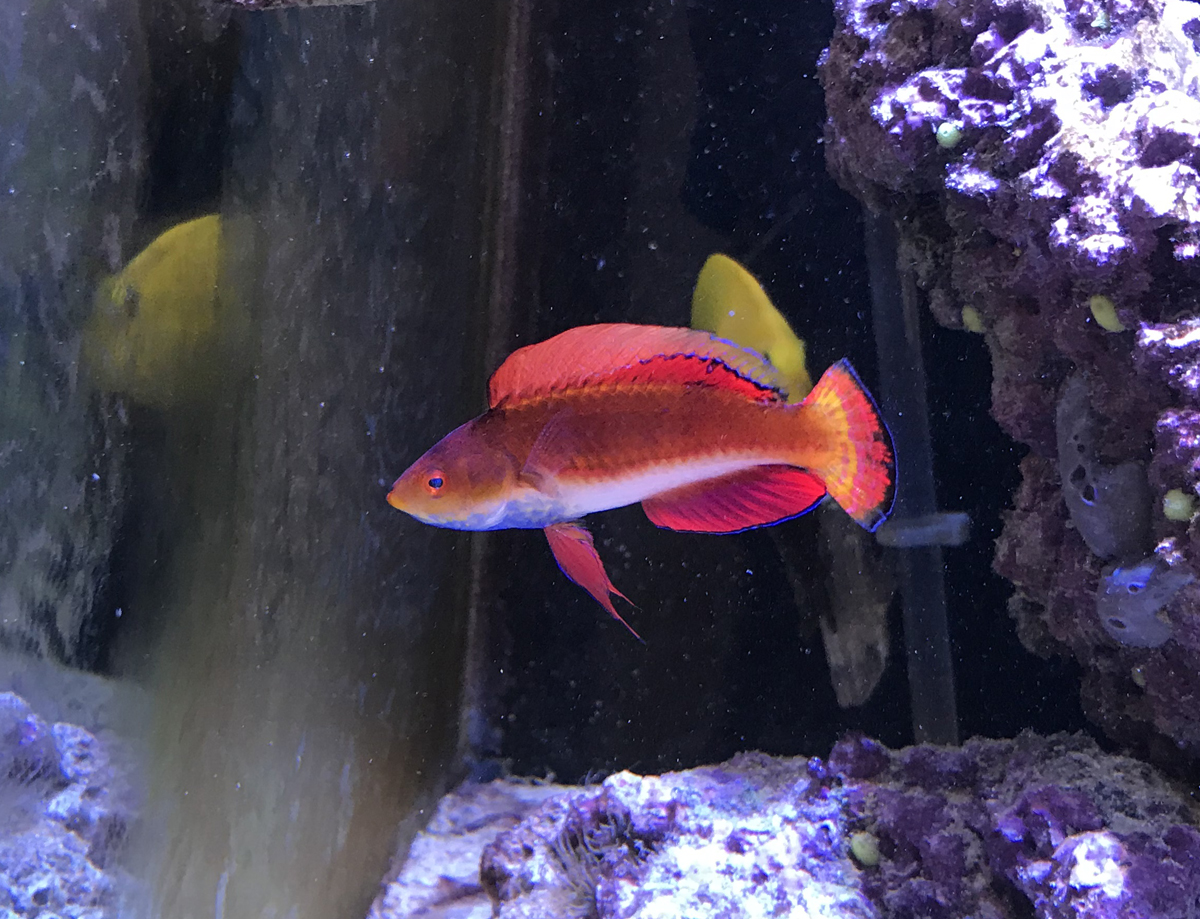 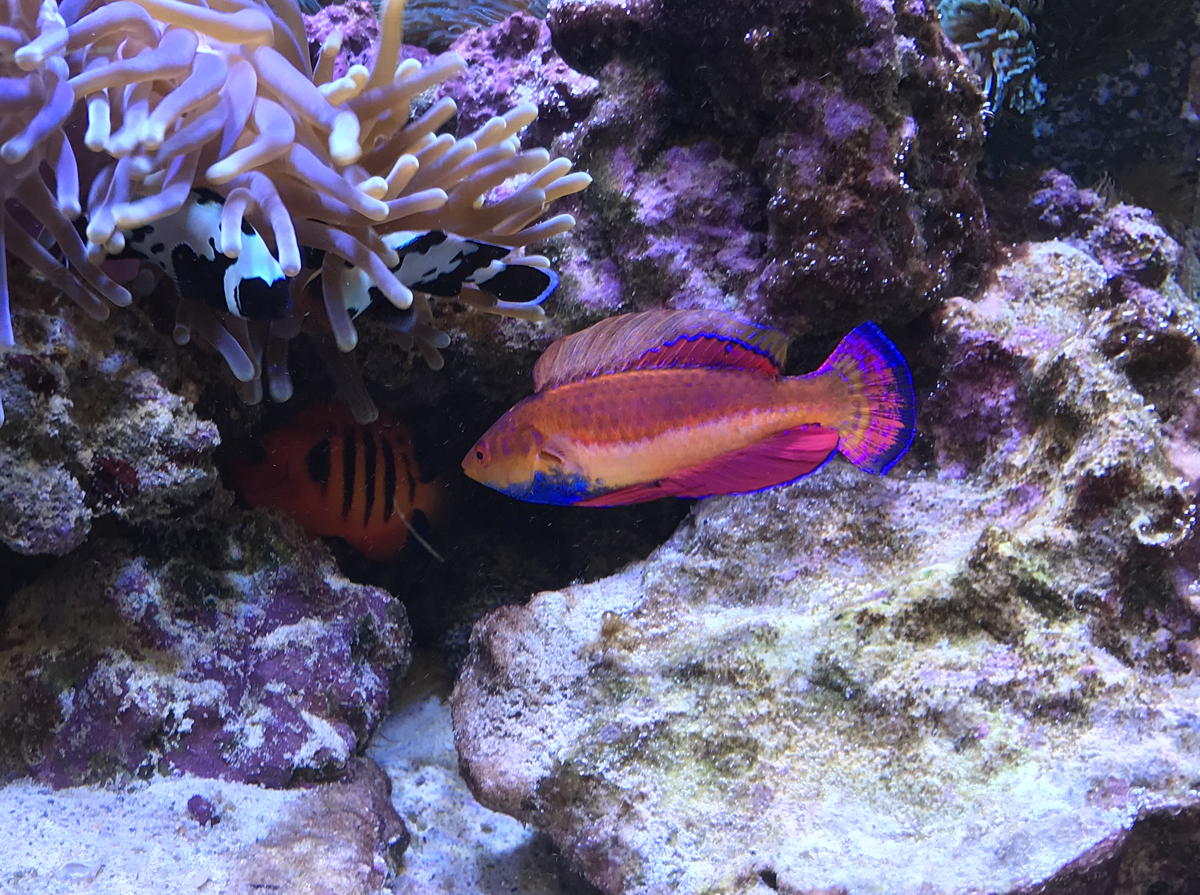 dbraun15 said:
So all nems are alive and well? If so, excited to see this tank back in its full glory!
Click to expand...

I one of my two Malu. I also lot my Red LTA, but all the Magnifica, Gigantea and Haddoni make it through the disaster.
OP

As of now, all my fish are doing well. Several are still shy and stay on one area of the tank, however most are all over the tank. All the fishes are eating aggressively. Several of my Fairy wrasse was thin and emaciated when I got them. They are doing very well and are gaining weight quickly.

Gorgeous fish, too bad he could not play nice.

What grain of sand or brand do you use?

Build Thread 85 Gallon scratch build too divorce.....Passed the point of no return so suck it up!
2 3