Coral with the BEST color and what's your favorite coral color?

I actually enjoy rainbow colors like the Purple Monster Mushroom pictured. I have 5 corals with the word rainbow in them, three of which are chalice corals. My favorite one so far is called Jelly Bean rainbow chalice. After that, I would say red, orange, blue, and purple in that order. I have all those colors and yellow and green in my tank too.

Love my orange and pinks 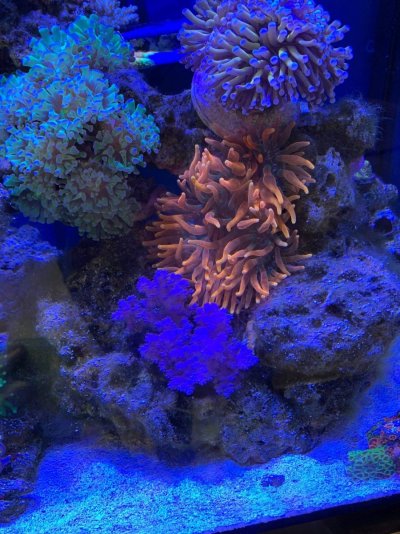 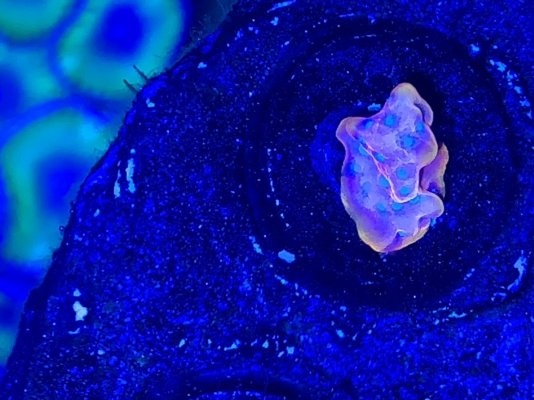 Currently I think orange blue purple. Voted other as I could not pick one.

Lyss said:
I ordered a white-polyp toadstool from Biota that came entirely snow white but is starting to color up more now after having been in my tank for a few months -- I'm seeing greens/purples/blues starting to come out under the lights. How long has your leather been in your tank?
Click to expand...

Sounds lovely! I've had it around 6 months. It has nearly quadrupled in size, but has definitely not changed colors. Not that I'm against it staying white... I'm just super curious as to what type of leather it might actually be? White devil's hand/finger? It has ever so slightly a blush of pink...(pics under white lights)

thatmanMIKEson said:
Mine is definitely oranges under actinic, I like stuff to glow so people ask if its real or not..
Click to expand... 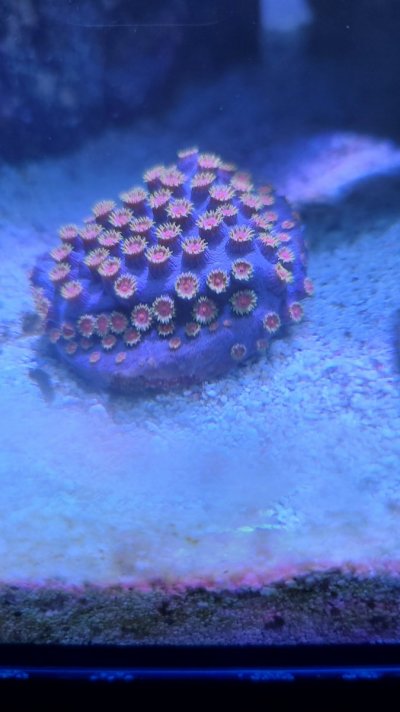 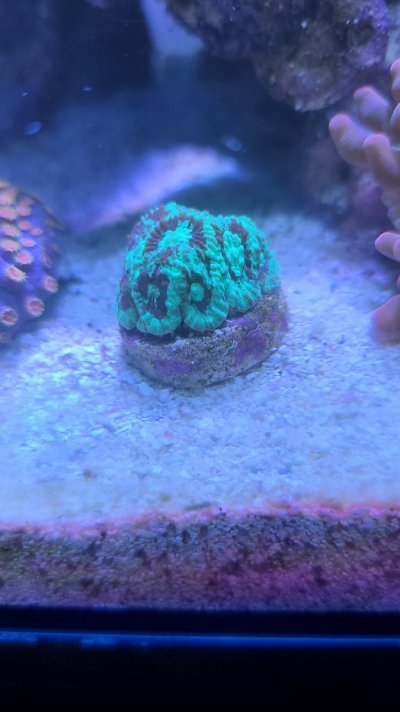 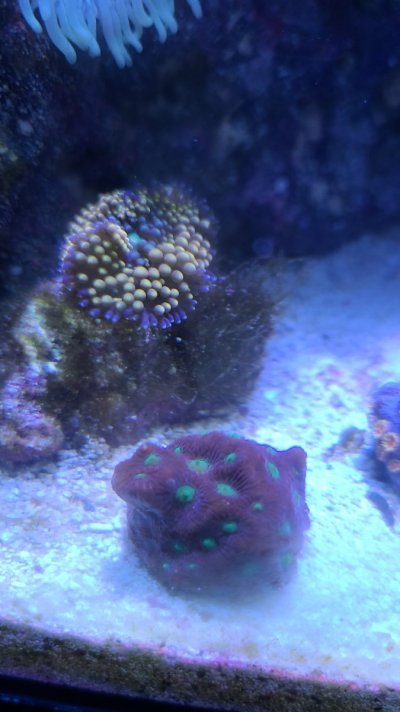 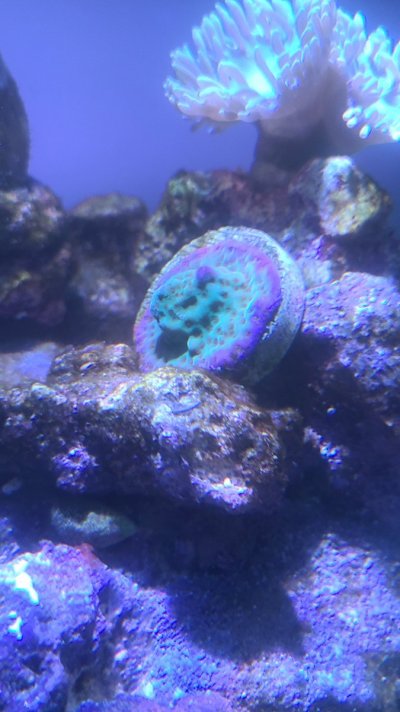 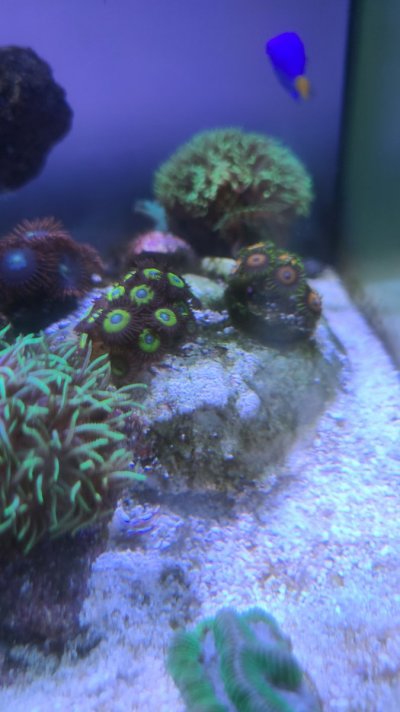 Hard to pick a favorite color, anything that sticks out I guess. If I had to pick one I guess it would be yellow or orange.

I personally love orange and yellow. 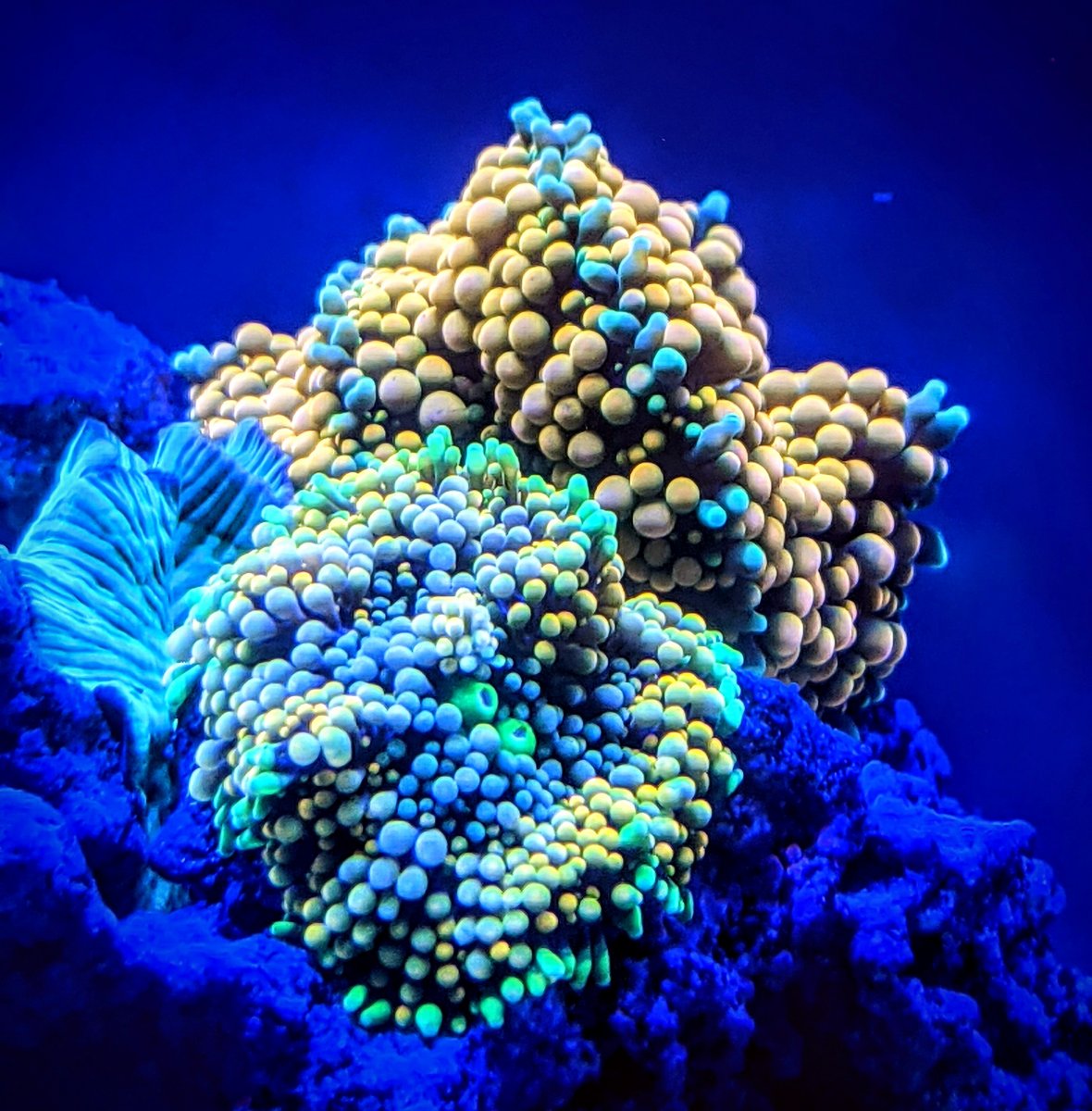 afrokobe said:
Do you know what is the coral in the first image?
Click to expand...

@afrokobe I think its a torch of some sort... If not could be a leather. (im talking about the big one in the center of the photo
A

DweltAlloy033 said:
@afrokobe I think its a torch of some sort... If not could be a leather. (im talking about the big one in the center of the photo
Click to expand...

Yea the center one. Now you say leather I can kind of see it. Just never seen a leather with those colors

I personally like all the colors of the rainbow

But oranges yellows pinks and red are harder to produce pigments

Too me as a reefer it seems like when I first started reefing; we seen more beiges, brick reds, tans,browns, mauve greens and purples with mh and white colored t5 in the early days of reefing

Then when we started to improve our water quality hobbiests got better at keeping coral long term as a whole with the home ro unit ... before a coral would always die not if but when and then need replaced. With home ro units we started to see sustainability over time

As hobbiests we learned more and improved water chemistry, and learned about feeding our corals. coral health was inturn improved and we also learned about amino acids in a closed loop system and more advanced synthetic based ion salt was produce to be rich in trace minerals and pro biotic not just the big 3 and in 1996 with the release of 2 part esv bionic people didn't have to mix their own anymore.... the big change happened around 2006 for hobbiests in the us with the release of new german t5 technology blue light dropped and the spread of data through the internet people were
Learning to keep coral longterm

Jullian sprung, steve tyree, and garf were the leading sources of info that arose in those times and many people still value their opinions today,imo they were the first in the states to color up coral


But now with 5 way testing, icp tests ,800$ programmable leds that apps work half the time then lock u out the other half, pharmaceutical grade reef salts that cost 100$ a bucket from germany, 500$ powerheads that are programmable, protein skimming technology(before you had to manually remove) media reactors , apex blah blah blah) were seeing way more colors than before... and this is due to innate malubility and being able to manipulate the environment

We can feed a amino for polyp extension, broadcast feed, then feed our coral food to ensure that the coral is eating

We have amino acids that pull certain colors

We have probiotics that boost mucus health

We can dose with a pump vs by hand

We have atos now

Alot has changed over the past 20 years some for the good some for the worse, but one thing is for certain leds advanced to a point far superior then I ever expected in my life time and the advancement will only get crazier
And more expensive 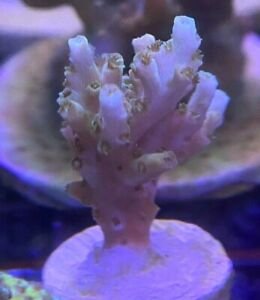 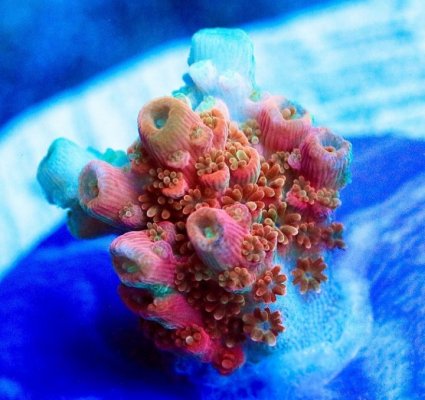 My tank has lots of red shrooms and Bambam so I voted - need a Yellow.

I love all the colors but all of the sticks turn brown eventually?

Cant believe blue was not even an option!

By far my favorite color for coral. Looks good in variety of lighting and just gives a clean look to me.
C

i cant think said:
Also, I’m slowly enjoying the cyano under whites now!! I hated it under blue lights because it looked so unnatural and was a deep reddish colour, now it’s more brown and looks 10x nicer and more appealing!! I think the uglies are the nicest time in a tank’s life!! 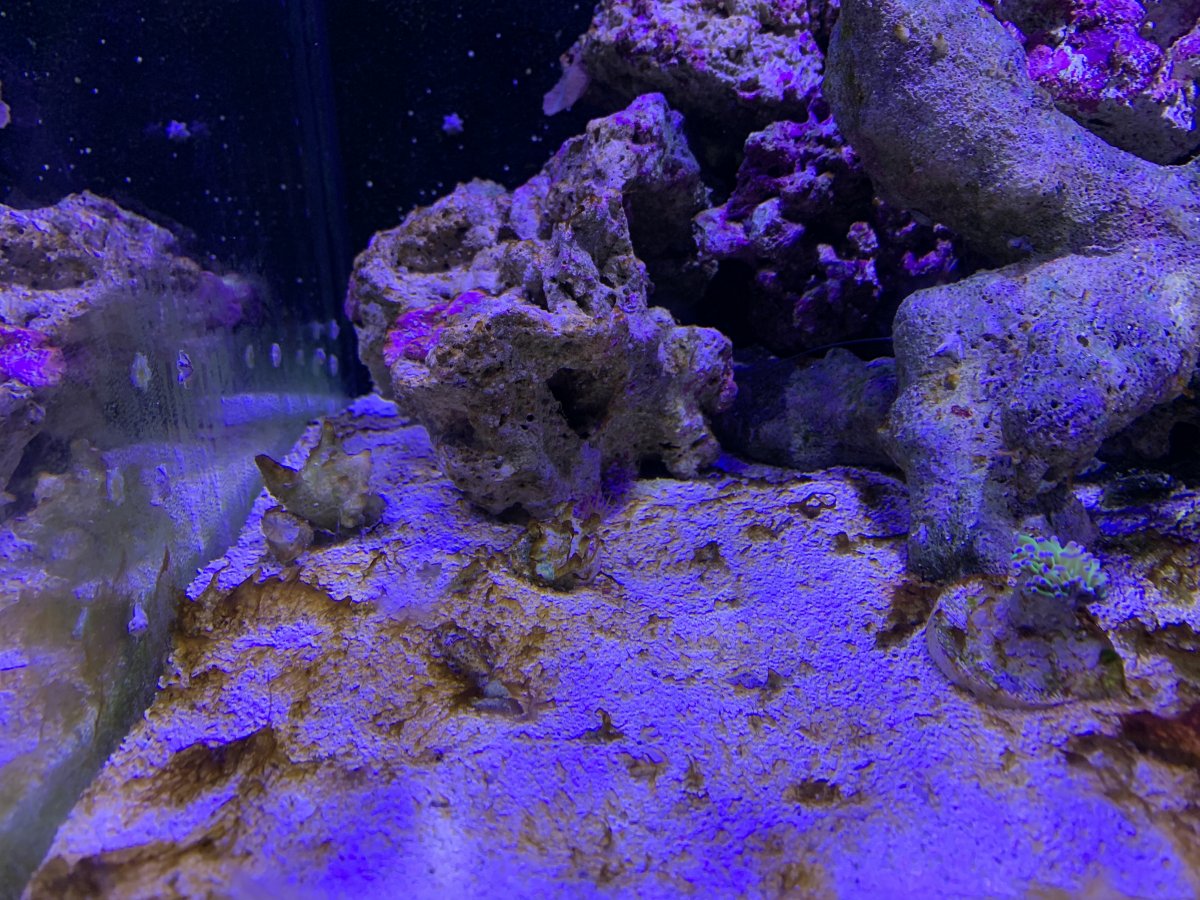 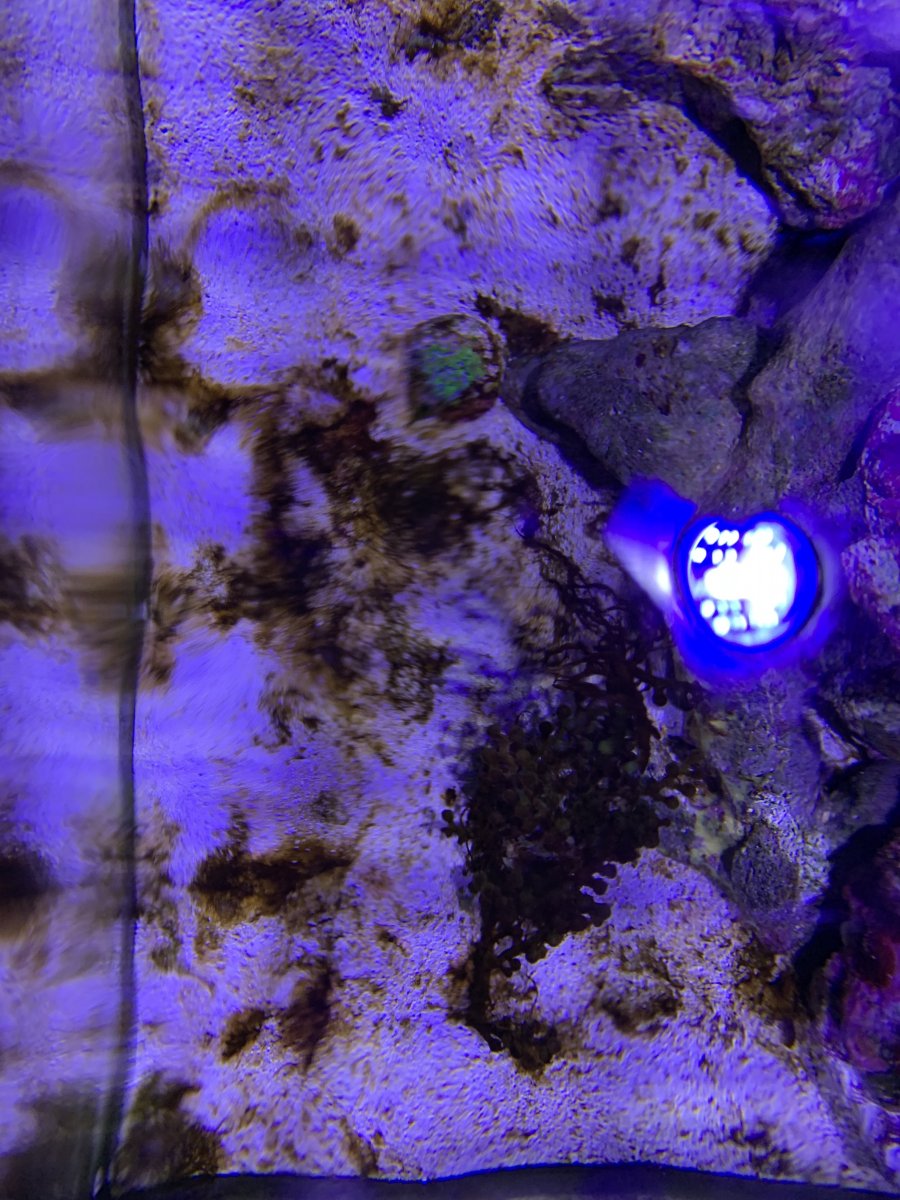 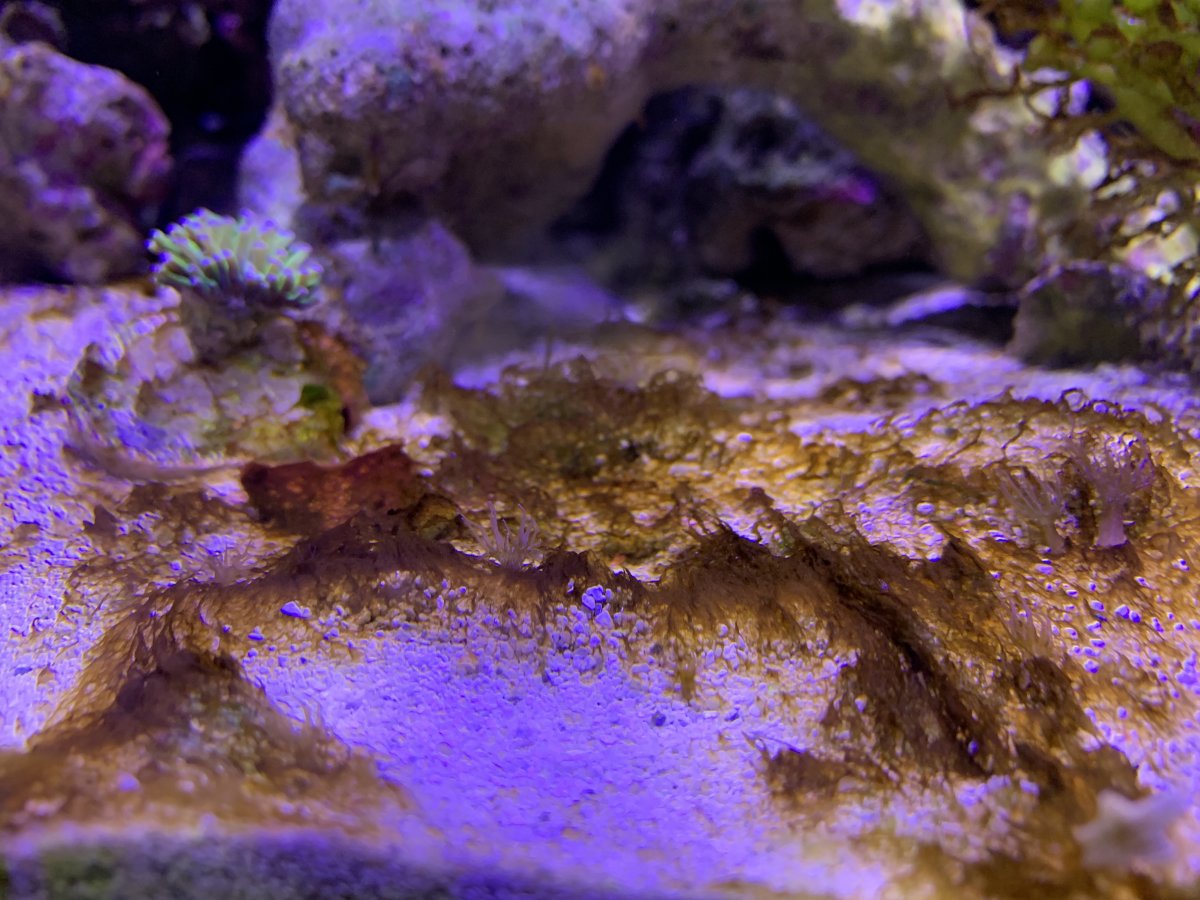 Pelagikos said:
You have a white leather too?! I've been trying to identify what it is exactly, that I purchased. SOLD to me as a Neon green sinularia, mine is completely white, polyps and all.
Click to expand...

See the smaller one? My son says it is actually my favorite. It is very fussy, and reacts the quickest to any change . Especially water changes? I actually split mine as a smaller section was growing out of the base

QUESTION OF THE DAY What color is yours and what is the BEST colors for an Aquarium Stand?
3 4 5 6 7

QUESTION OF THE DAY What coral has been the most rewarding in your reef tank?
2 3 4 5