Entering the reefing hobby with 20 long

I am newbie, entering the reefing hobby with 20 gallon tank. Took me solid 2 months of research to convince myself I could keep a reef tank, I'd say its for the best. I chose 20 gallon because i wanted to something I can maintain easily (one 5 gal bucket water change) and can accommodate in my apartment. Started my tank on June 12, 2020 and my initial setup then was 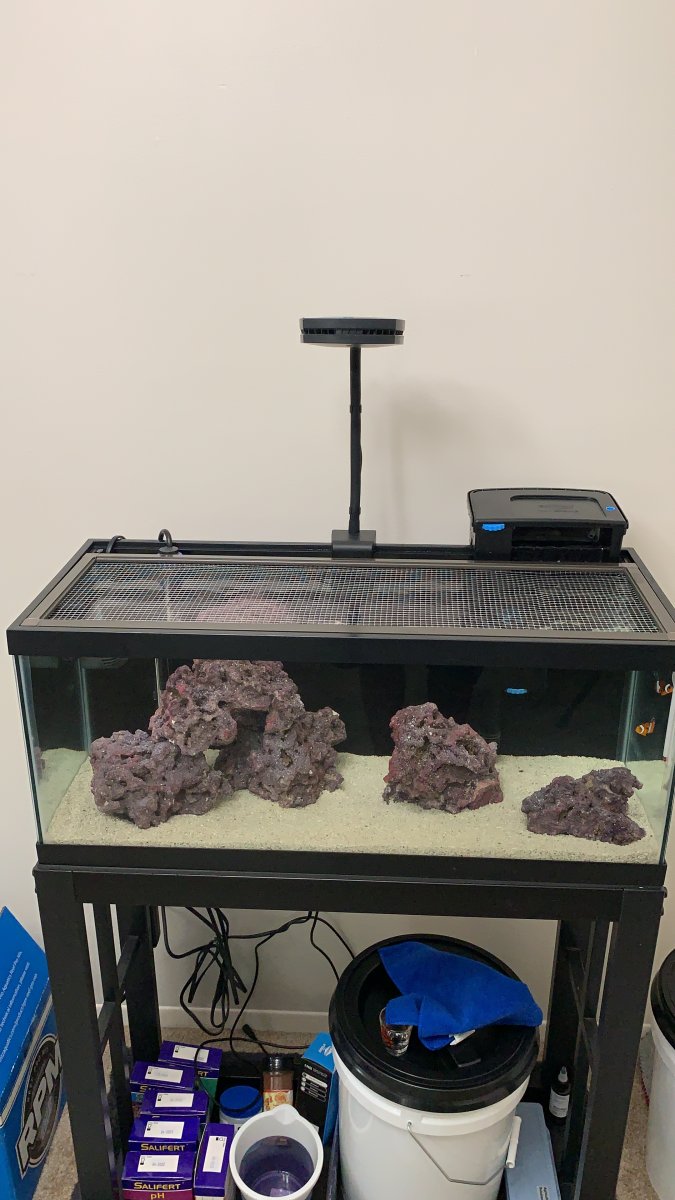 Started my tank with Fritz Turbostart 900 live bacteria and a pair of ocellaris clown fish. Ammonia wasn't noticeably from day one, nitrite dropped to zero in three days and never noticed ammonia/nitrite after that. The dominant clown, one with a caramel tinge settled down in a couple of days. The other one kept swimming frantically doing laps across the tank for a week and right when I thought it was settling down, he jumped out at night through the gap at the back and was lying dead crisp on the top of the mesh lid. First lesson learnt, do not leave any gaps when building the mesh lid. Added another small clown to the tank and they got along fine. Over the course of the month, slowly added more fish. The stock list was

Pair of clowns
Pair of bangaii cardinals
1 Yellow watchman goby
1 royal gramma
1 cleaner shrimp (came in last, the nitrates didn't rise above 10ppm so felt it was okay to add) 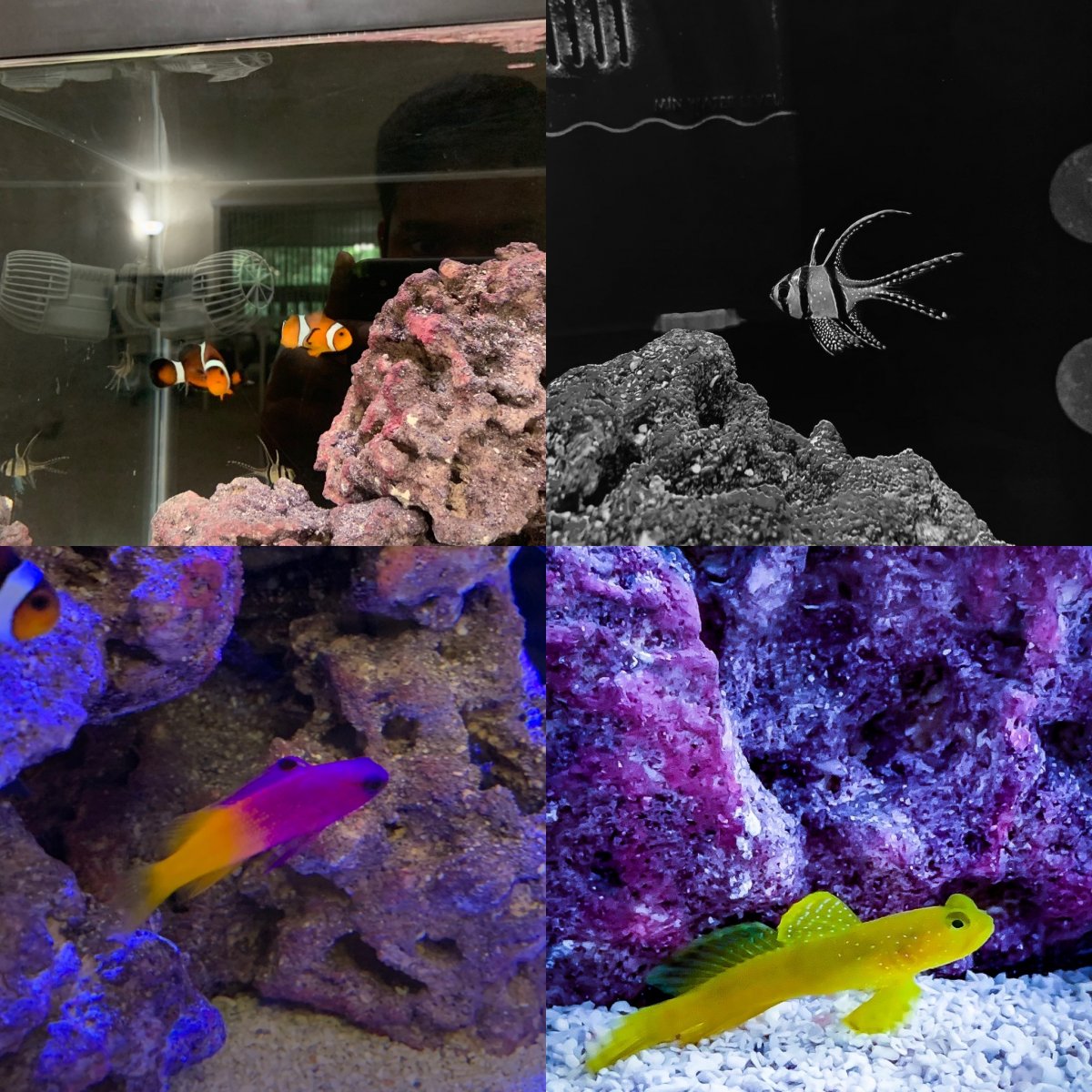 Things were fine, the maintenance schedule was 25% water change every 2 weeks and cleaning the filter sponges every week. The lights weren't turned on, only ambient lighting from the living room. Manual topping off with RODI water. Fed them mix of frozen mysis, brine shrimp and pellets. 10ppm nitrate was my mark to correct the feeding amount.

At the 1.5 month mark, one bangaii cardinal went missing overnight. After an hour of searching by moving the rocks, realized it was dead and was almost completely eaten by the CUC, found the hermit crab chewing on a tiny skeleton remain. My first tank crash was just beginning. I couldn't figure out why it died, no white spots, it was eating properly and no aggression from anyone. After one week, the royal gramma started hiding on the back of the tank near the sand bed and wouldn't come out. I suspected ich, but wanted to confirm so forced it out of its hiding to get a good look at it, I was able to see some white spots on it. Second lesson learnt, always quarantine the fish. Rushed to setup a QT tank, bought the aqueon 10 gallon kit and set it up with live bacteria for quick cycling and moved the royal gramma to the QT tank, dosed cupramine (got to know later that basslets dont like cupramine). It did not move a lot but was eating and the white spots disappeared in 3-4 days. In the meantime, my female clown became aggressive towards the other one and banished it to one corner of the tank. So I moved it to the QT tank and overnight the clown had picked on royal gramma and chunks of his tail fin and pectoral fins are gone. Third lesson learnt, forgot that healthy fish pick on sick fish (thing I knew already from my freshwater experience, but somehow never crossed my mind). The clown went back into the DT right away. The condition of royal gramma worsened after that, he refused to eat anything would just stay in the same position for several weeks, but he held on. The male clown wouldn't submit to the female, he got harassed and harassed and finally died. The remaining bangaii cardinal started hiding, so I moved it to the QT, but this time separated the fish with a breeder box, but bangaii died the next day. The royal gramma held on for almost a month and then died. The remaining female clown and yellow watchman goby showed symptoms now. But it did not look like ich, upon further research realized it was not ich and but brook all along or a combination of both not sure. Treated the display tank with prazi pro for one week with the remaining two fish in it, symptoms did not reduce. Mixed metronidazole with food and fed the fish for 2 days, stopped after 2 days because I learned metronidazole can kill cleaner shrimp. Two days of metronidazole was enough for the female clown, her symptoms cleared up, for the yellow watchman goby not so much. The cleaner shrimp worked overtime in eating off the parasites off the yellow watchman goby, so it survived for another 2-3 weeks and then died. The only survivor was the female clown and she looked healthy at that moment.

I drained the QT tank, cleaned it and sterilized it and wanted to set it up properly again. As I rushed last time, i did not cycle the QT properly, there was small levels of nitrites, but kept going because I read marine fish tolerate nitrite levels. This time added a bag of seachem matrix addition to the sponges in the HOB filter, extra air pump for additional aeration while treating with prazipro, did a fishless cycle with Ammonium chloride. It took 1 month to cycle and after that moved the remaining clown fish to QT tank to let the display tank go fallow for 76 days. This is the QT tank now, I am following the humble fish regimen with copper power for 30 days with metronidazole, followed with prazi-pro for 2 weeks. 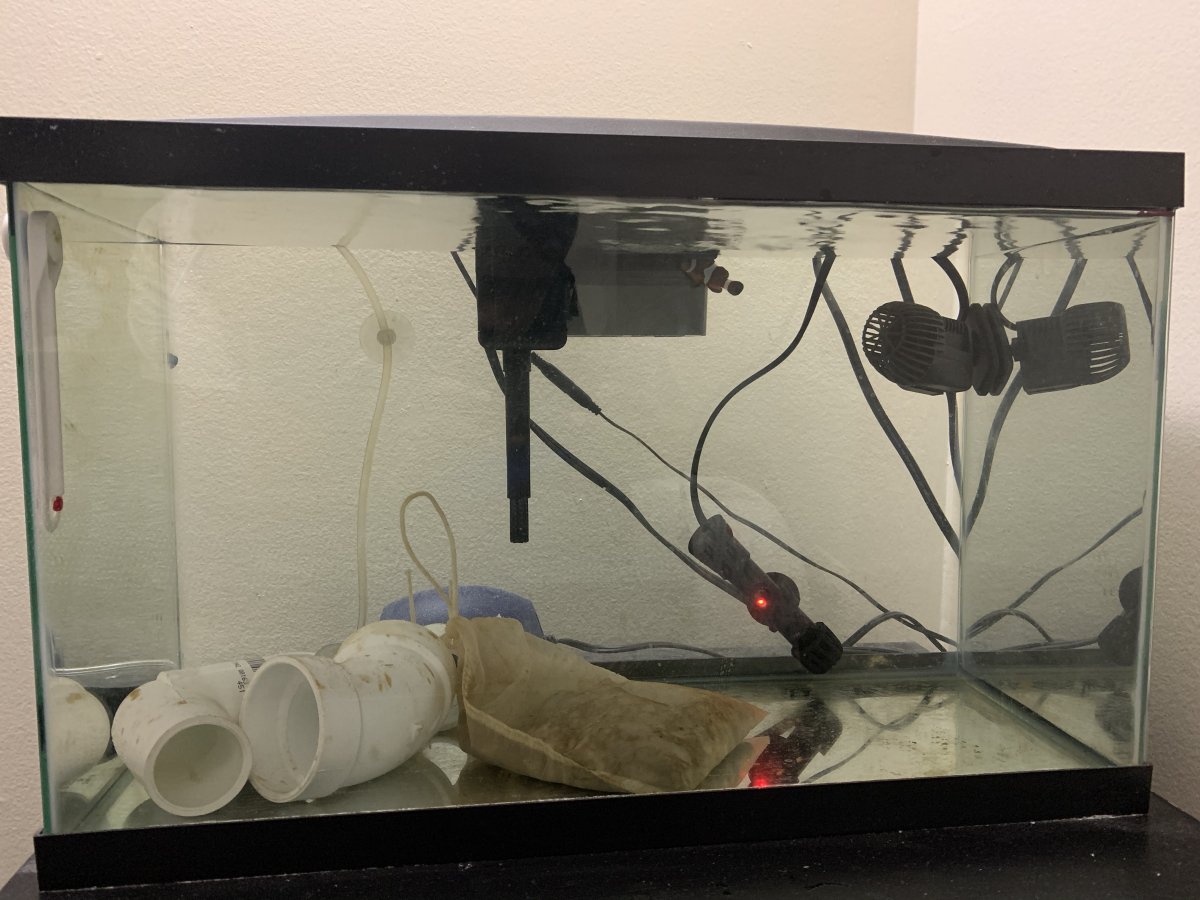 I have added a tiny flurry clownfish, didn't want to see the female clown get lonely. here is the pic of the little guy. They have paired up, I see him doing the mating dance all the time and the female seems to have accepted him and they hangout all the time. 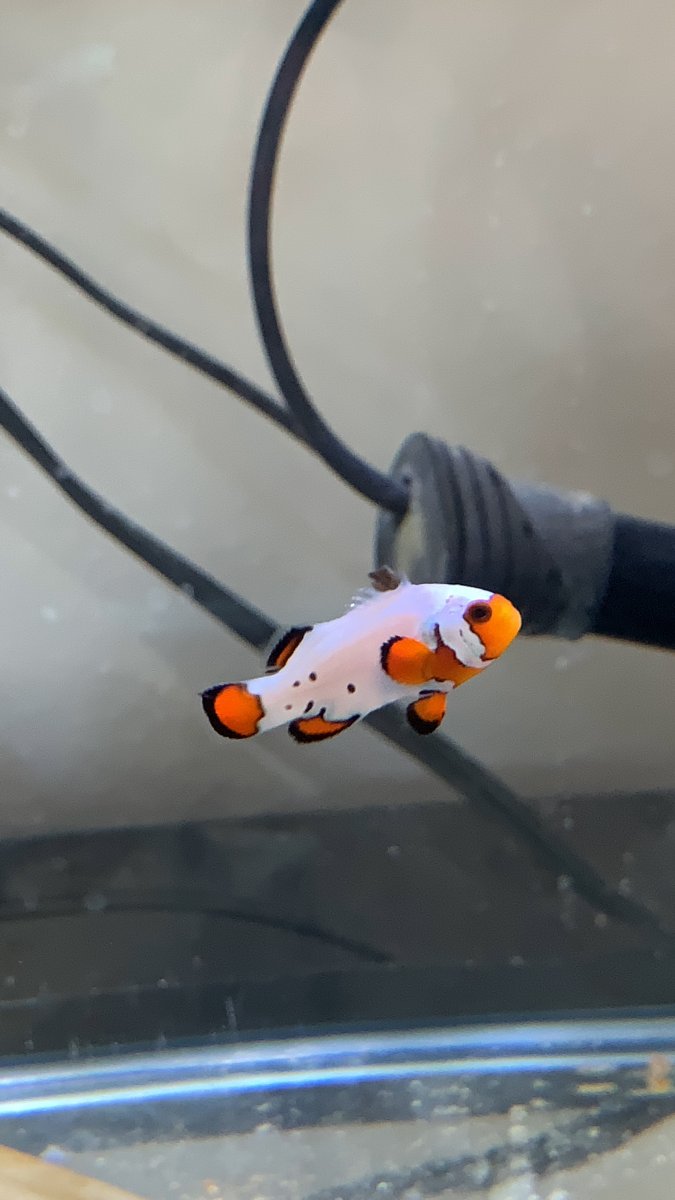 My first tank crash kind of spurred me on and I decided to go all in, doubled down on research and now things are going fine. At the 4 month mark, I have made some upgrades to the display tank. Added:


The lights have come on, slowly added corals starting from softies and then LPS. I know it's not recommended to add anything during the fallow period, but I don't think i can accommodate another quarantine tank for corals, so decided to take the risk. This is how the tank looks now. 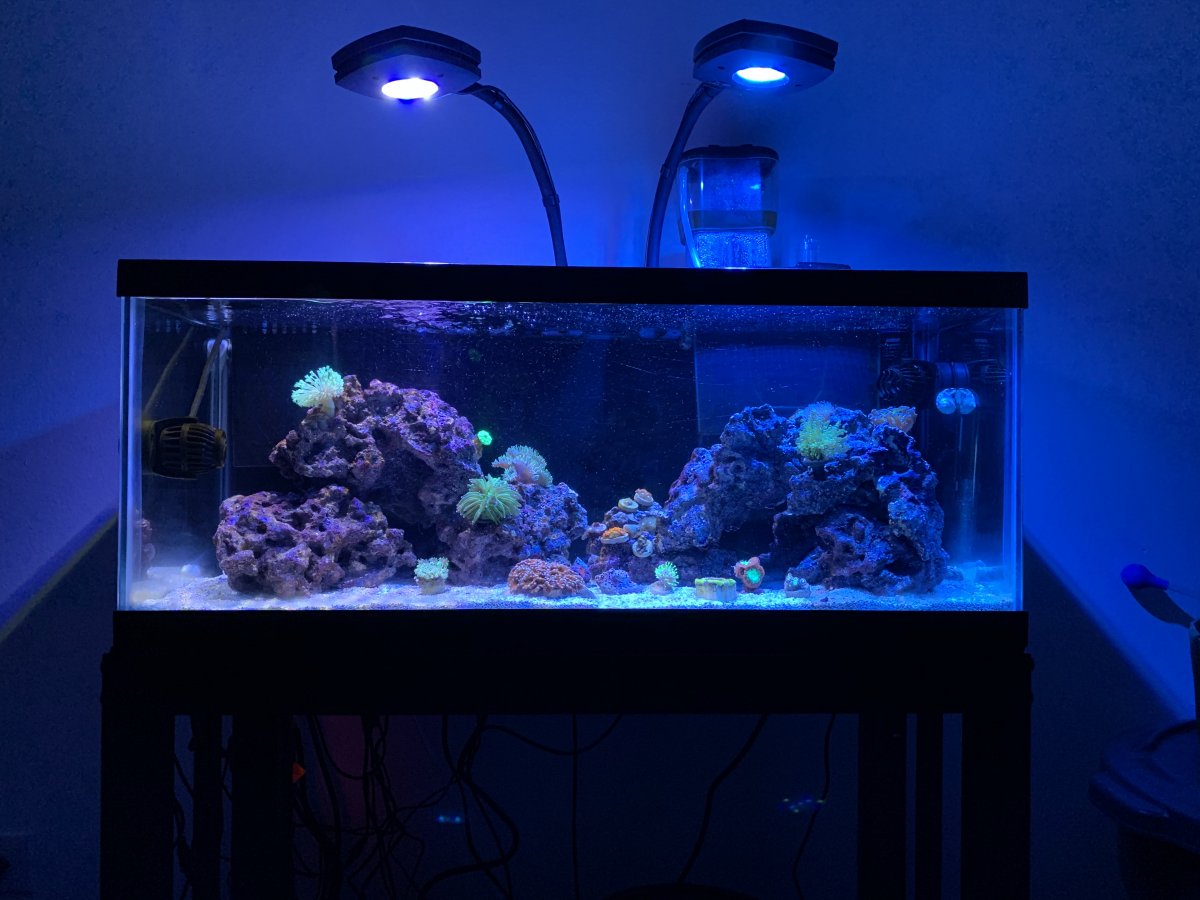 Started off with zoas and GSP, after those showed growth, added a couple of leathers, more zoas and a blue hairy mushroom. Seeded the tank with coralline algae scrapes from LFS and now I am growing coralline in my tank. Once I noticed coralline is growing, i added LPS starting from candy canes, duncans and then galaxea, favia, blastos, acans and euphyllia. Here are some of the coral shots. 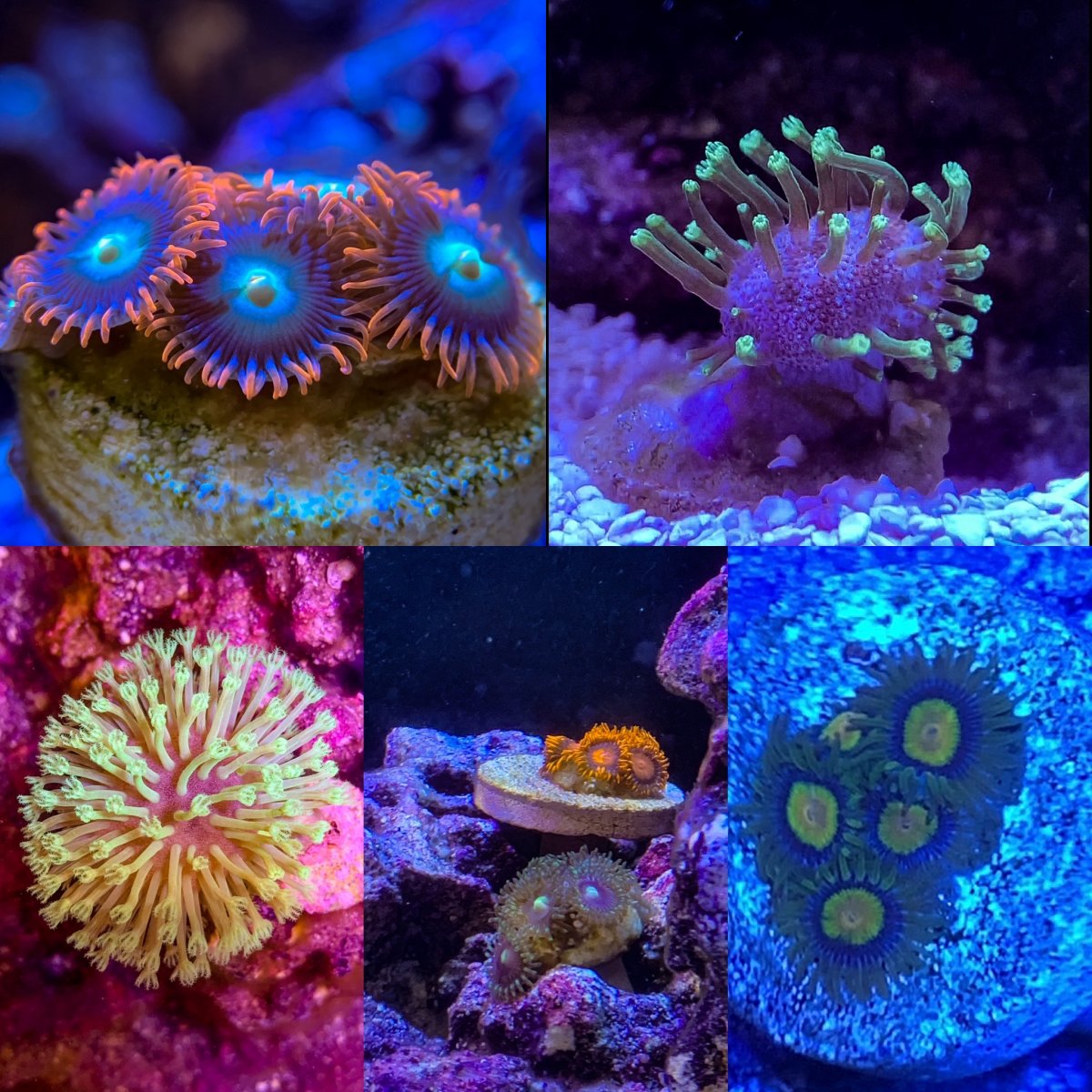 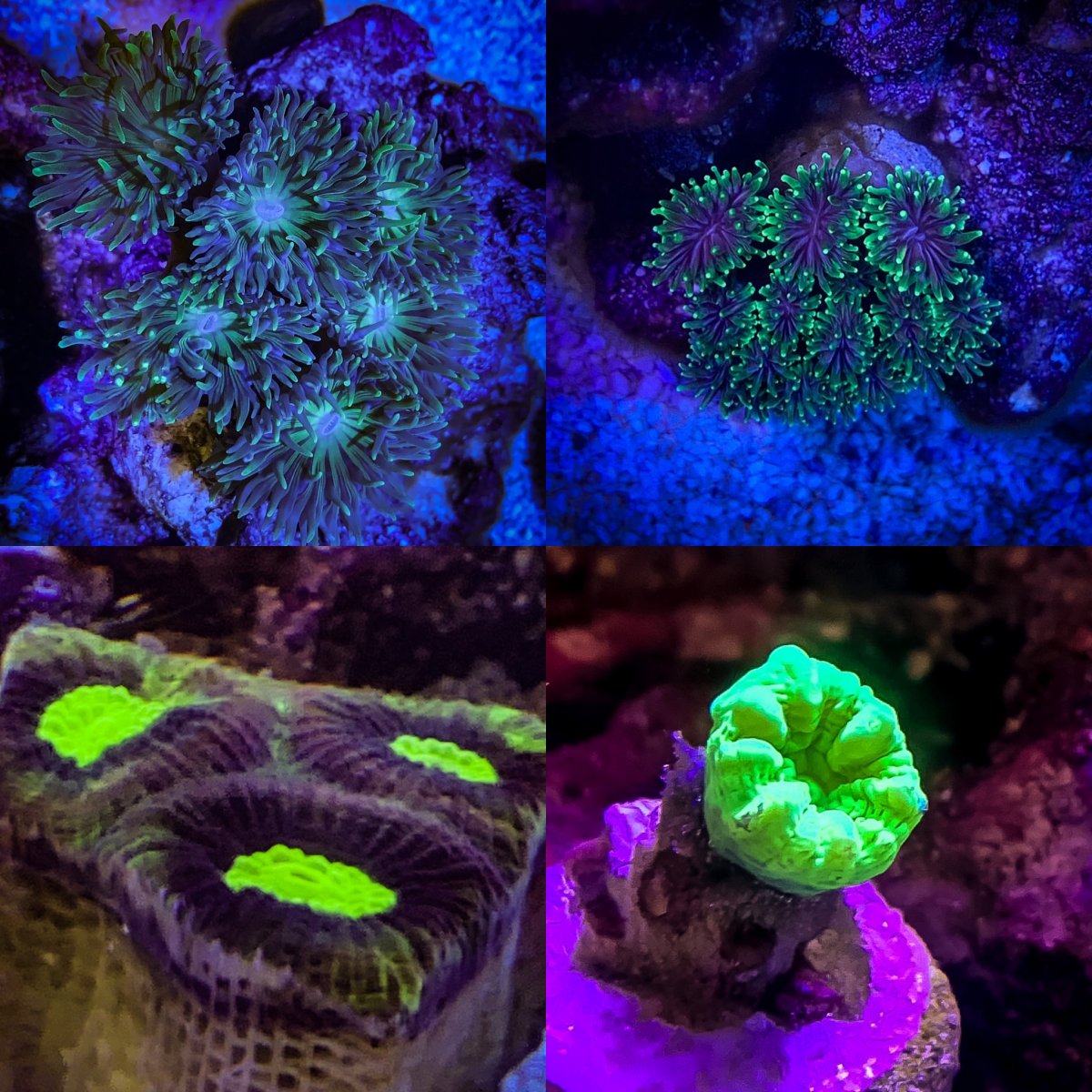 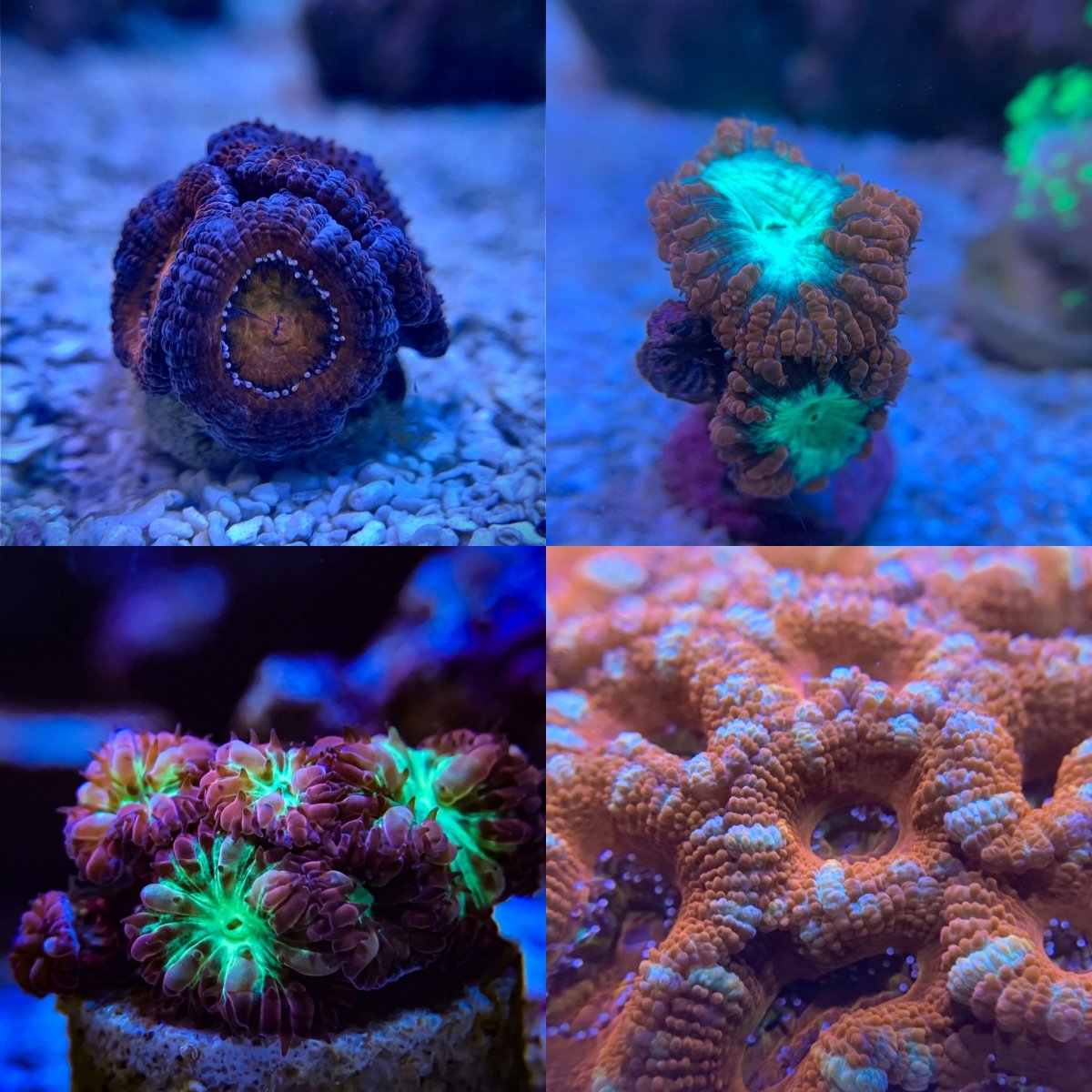 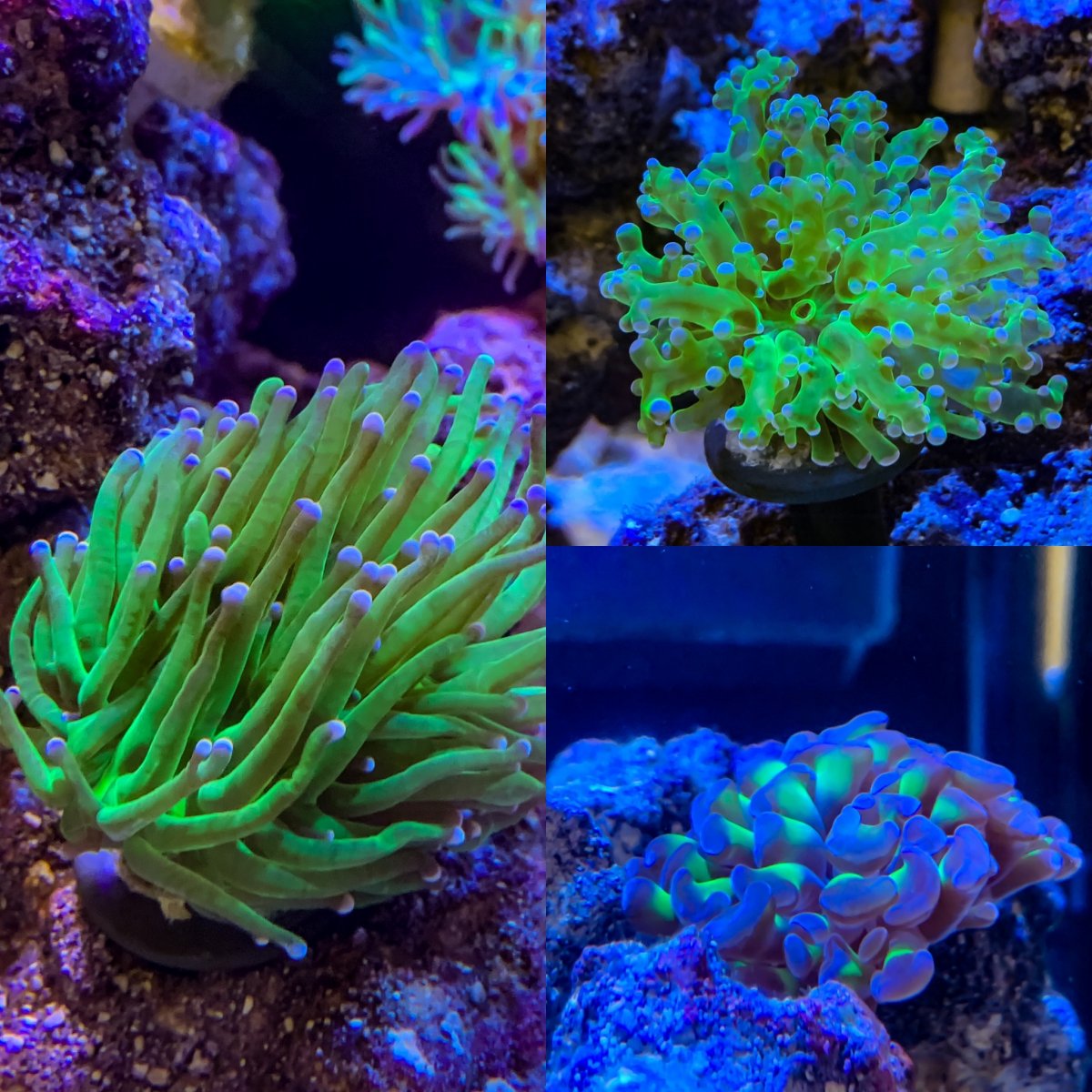 The corals are doing fine, I am feeding them once a week with reef roids with polyp booster. I am seeing growth in the LPS corals as well. I am in the ugly phase now, hair algae is growing. I have been keeping with regular water changes, brushing off hair algae, added more snails. I see improvement now, hair algae as receded as lot and hopefully will vanish in time. The alkalinity is being consumed so started to dose Tropic Marin all for reef. Purchased Kamoer X1 Pro 2 dosing pump, still haven't set it up.

For water change, I have a 20 gallon brute trash can with heater and powerhead as my mixing bin. I mix them bulk once a month but I am seeing that alkalinity is dropping with storage with Fritz salt. After a month, the alkalinity dropped from 8.0 to 6.7, contacted Fritz support, they said they are performing an experiment similar to BRS TV investigates video to address this alk drop complaint from users. Depending on the information I get from them, I will either continue using Fritz or consider switching to HW reefer as BRS TV video shows that the alk stays constant for this one.

In the QT tank, the fish are doing fine, three weeks left for the clownfish pair and four weeks left for the fallow period to complete. I am now working on the new stocking list and would like suggestions. I am thinking of adding the following

I apologize for the long post, just wanted to document my experience so that it might be helpful for anyone who is starting off.

Looking good! Welcome to the reef!

Keep up the research and take it slow. See how the clowns do.

May 12, 2021
Bobson11
B
M
Clownfish lethargic and breathing heavy