Erk's Attempt at a Reef

Thank you very much! It's definitely been a long road, but I think the tank is look really nice right now. Hopefully I don't mess it up!

You wont regret the Euroquatics fixtures - managed to get myself one and I love it - honestly cannot believe they weren't more popular!

I bit the bullet and bought a top-down porthole for photographing coral. Shooting thru the glass was getting really annoying. I wasn't getting acceptably sharp photos and I know it isn't the lens I use. Even on a tripod the results weren't up to par. Doesn't do much for fish pics, but that is a different issue altogether.

ph123uk said:
You wont regret the Euroquatics fixtures - managed to get myself one and I love it - honestly cannot believe they weren't more popular!
Click to expand...

I powered them on just to try them out and I really like them. The control software is really nice and with the API documentation I received from Euroquatics, I can write my own custom software to control the lights. My plan is to use them on a tank upgrade in the future.

Yea, very nice piece of kit to be honest!

Not sure about on an iPhone but you can find the old .apk for the android version to install

Phyto dosing is coming along well. Added a second culture kit. Will alternate which culture I dose each week. Built a quick little box to house the whole thing. Might start looking at how I can automate things a bit. 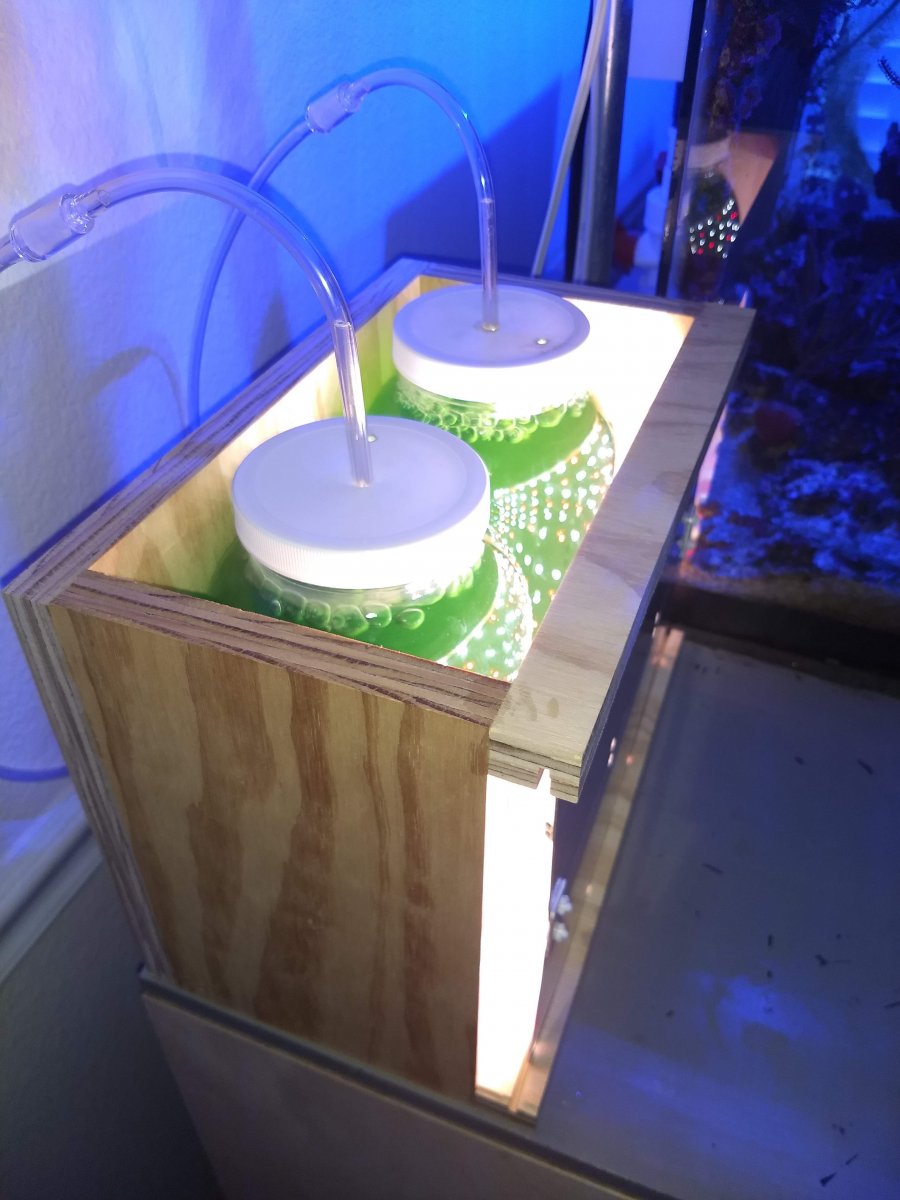 I've noticed that the swallowtail damsels are having larger and larger spawns. Not sure the cause. Maybe increased food supply is helping. Hard corals are looking better, still on the fence with the SPS, but I have noticed they are getting a bit more color recently. Maybe a little growth edge, I can't tell. Added a pavona and monti spongodes and they are looking great. Cheap corals to test things out that I would like to keep if they do survive. The only nutrient control in place for my tank is the skimmer and it runs for 12 hours at night.

Just noticed that one of the acros in my tank has growth. It is growing back over the dead spots. One spot especially has shrunk considerably.

I got my Avast Marine top down porthole for my camera. Can't wait to try it out.

When I was doing my morning tank regimen, I noticed the swallowtail damsel pair were laying eggs on the back glass below the overflow as they typically do. First time I actually got to watch the act. What I didn't realize was the extent of the egg laying. They laid enough eggs to cover an area about 8 in^2. The bare glass just below the overflow is no longer bare. It is covered in little black dots. They typically lay half this amount. Not sure what is going on, but I figure more eggs means happy fish. The fish and corals are happy too!

I made a video. Quick little showcase of the tank as it is right now. Hopefully it continues to improve and grow and I can make a video in a year showing off a full reef. Let me know what you think.

Great photos! Those shots of the zoas are great.

What are you using for the photos and video?

luvmyacans said:
Great photos! Those shots of the zoas are great.

What are you using for the photos and video?
Click to expand...

Thank you very much!

I use a Nikon D810 camera body. For macro work, I use the Nikon 200mm f4 Micro. For general tank shots, I use the Nikon 28-70mm f2.8. And for the wide angle FTS images I use my Irix 15mm. I use the same setup for shooting video as well. I've recently started using a 1.4x teleconverter on the 200mm macro lens. It gets me a bit closer to get better detailed macro shots. I also bought the long tube top down porthole from Avast Marine and can't wait to use it for macro shots. Should give me much clearer images than what I currently get shooting thru glass.

Well, the time has come for my filefish to go to the sump. I caught it trying to eat gorgonian polyps and my new favia. Was wondering why the favia looked so bad.

erk said:
Well, the time has come for my filefish to go to the sump. I caught it trying to eat gorgonian polyps and my new favia. Was wondering why the favia looked so bad.
Click to expand...

Mine took out my acans, also removed.

najer said:
Mine took out my acans, also removed.
Click to expand...

I moved the filefish to the sump. I've had him for several months now and bought him as a 1 inch baby. I might try sticking some gorgonian frags in the sump so he will feel more at home.

As for the favias, I'm hoping the new one I just added bounces back. I've had a couple that receded a lot and I didn't understand why. They puff up at night though. Hoping they make a come back now. Maybe I can try some acans again.

That video was awesome. Nice work.

Thanks, man. It was fun making it. I'll probably do more in the future. 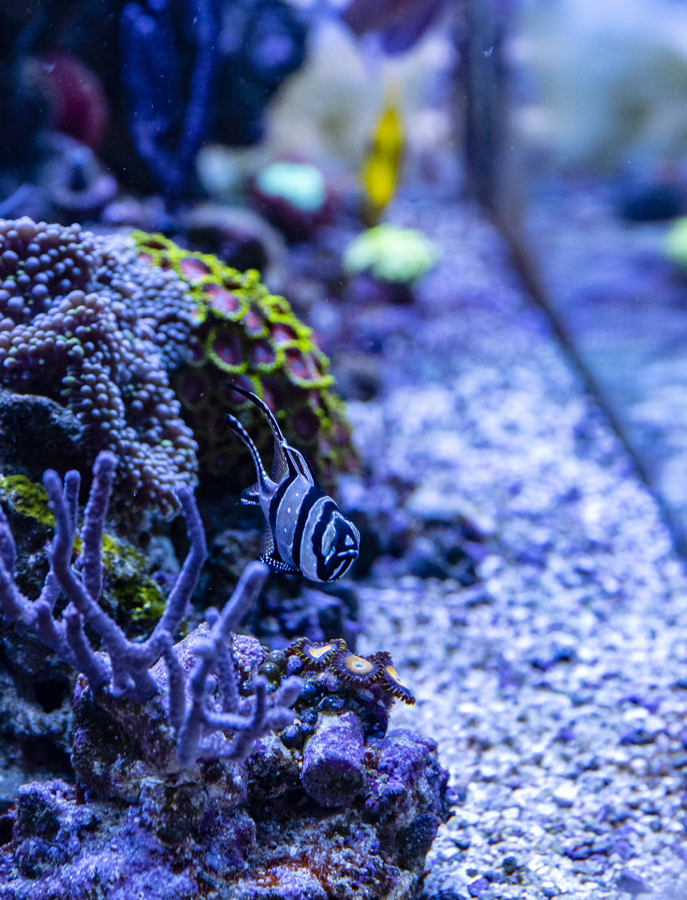 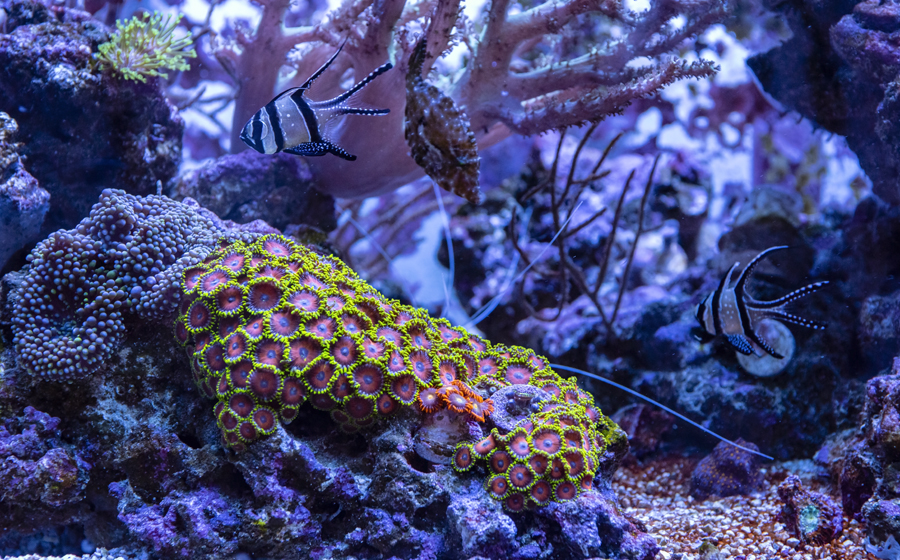 You need to teach me how to take pictures like this...

Patience, tons and tons of patience. I posted 3 images, but I took probably 10x that trying to get a good shot. Having good equipment helps though.

erk said:
Patience, tons and tons of patience. I posted 3 images, but I took probably 10x that trying to get a good shot. Having good equipment helps though.
Click to expand...

I don’t have any equipment, nor patience. Probably explains why there is no difference between my tank photos and a blue sheet of stock paper.

Since moving the filefish to the sump, I've noticed the sinularia and capnella have better polyp extension. Also my purple candelbra gorgs have really good PE. Unfortunately I'm also seeing a few aiptasia extending outward. Guess the filefish was eating the aiptasia.

The new favia continues to improve and the almost dead one doesn't seem to be on death's door any longer. The favia's were only puffing up at night. But they are a bit puffy today. Hoping they continue to puff up more and more.

I never witnessed the filefish picking at any corals so I'm honestly surprised that these corals were doing poorly because of a fish and not me.

I won't make the fish take all the blame. I doubt I was helping with whatever I was doing wrong.