Not much of a build thread. I put this together to house the abused spouse of a clown fish. I put a watchman goby in with her and a couple snails, 3 years ago.

I walked into the lfs a few weeks back... 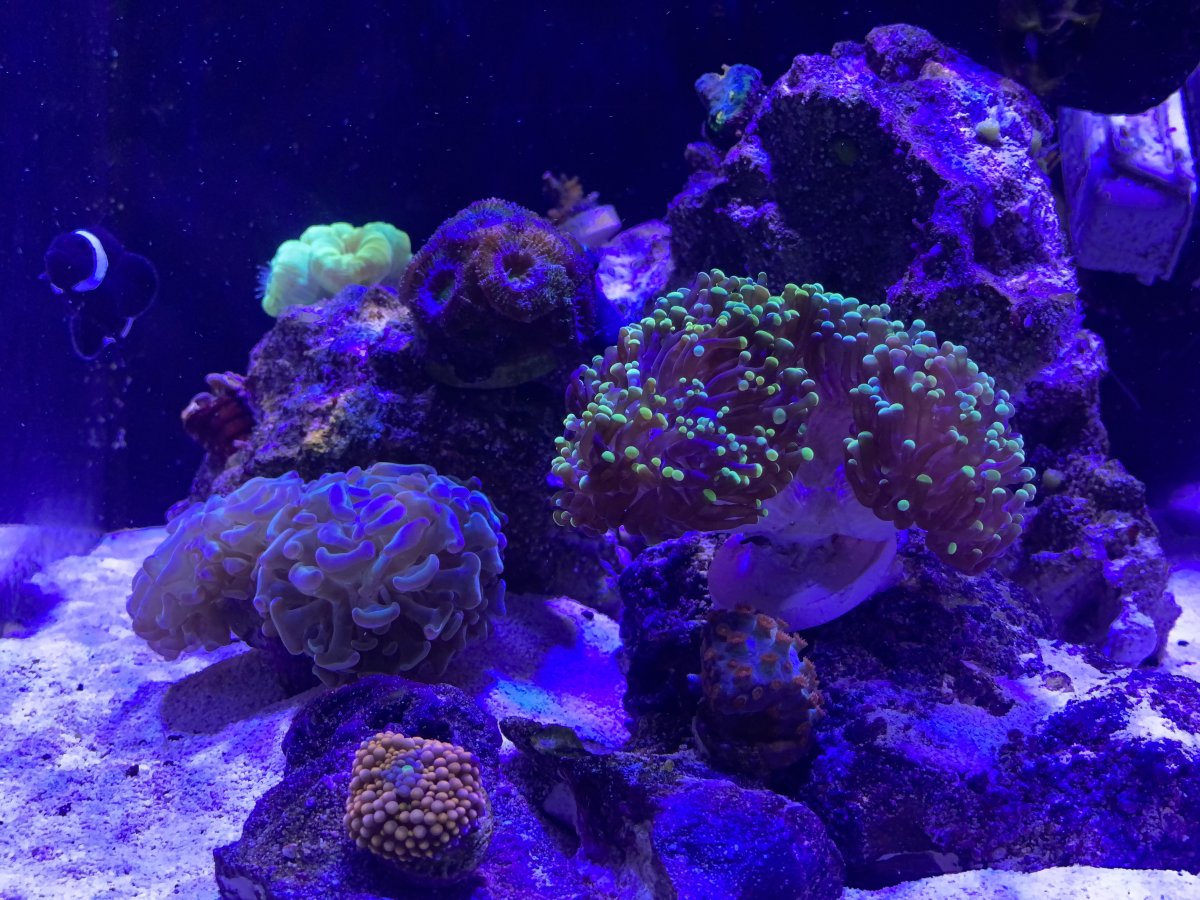 (Next picture) if anybody knows what that is behind the candy cane, please let me know it was a freebie tossed in the bag. 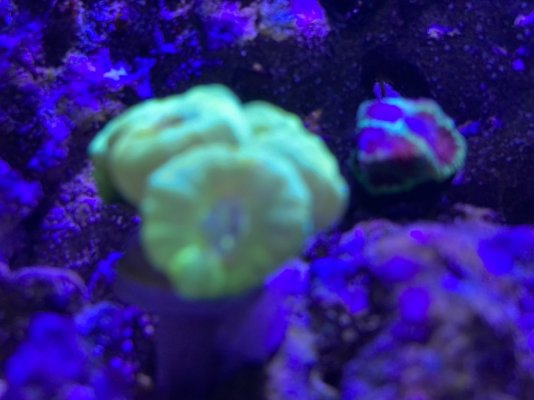 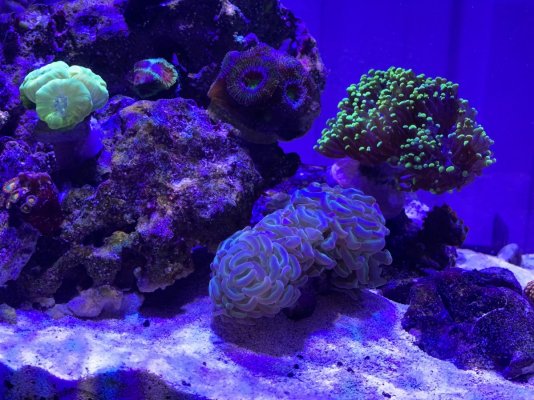 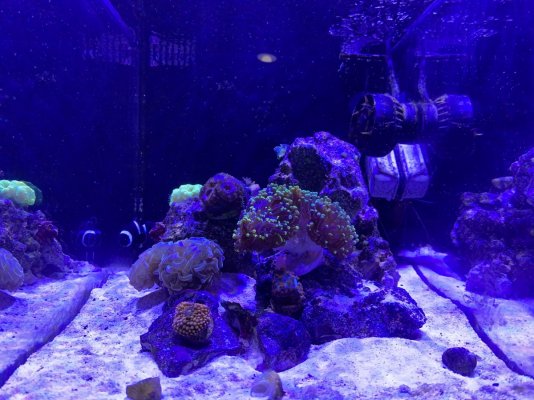 I appreciate that.
OP

The meteor shower cyphestrea has been in the tank for a month under those parameters and is noticeably growing daily. With the first two weeks alk swings between 9.2-9.4. Stable 9.4 the last two.
OP

I think I have finally seen the difference between survive and thrive in this tank. In the past I had coral it lived, some died, some would grow for a bit then stall. Colors were mostly mediocre. That’s why it was so easy to put every thing away and go fish only three years ago.

This reset from fish only to mixed reef Nano has been impressive. Nothing is dying, everything is growing:

Candy cane has two heads out of 5 splitting.

Both cyphestrea have visible daily growth

Purple stylo, Monty digi, and acros aren’t putting polyps away, ever. They just dance in the flow while the colors brighten and become more spectacular

The acans and favia are brilliantly coloring as well as growing.

even the inverts, which are easy I know, are kicking tail.

pom Pom crab, emerald crab, pistol shrimp and cleaner shrimp all have their own little niche carved out. Each one is molting or has molted in the last 2 weeks


the pod population is exploding 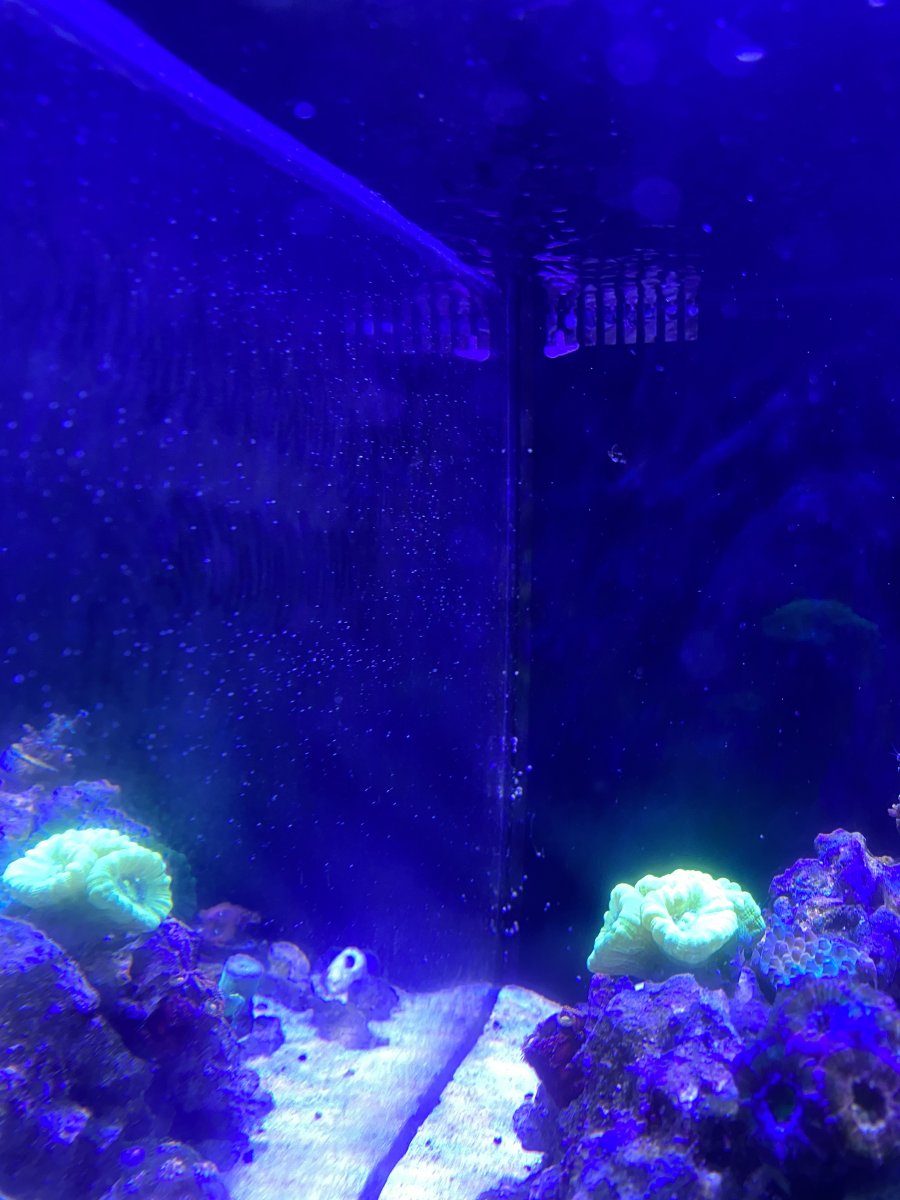 This hobby is once again extremely exciting to me.

Thanks guys, if you still have the tri-color valida and mind trick I’m putting in an order this evening. 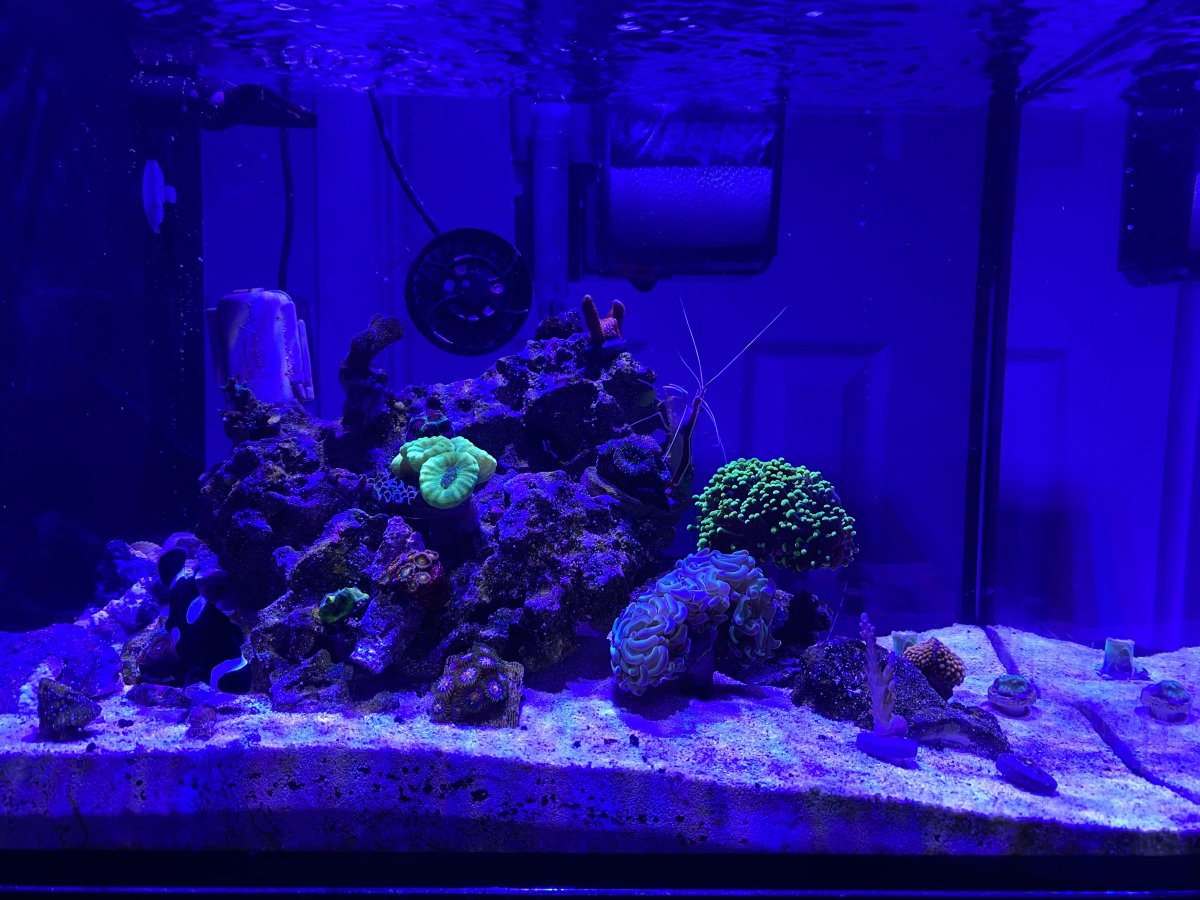 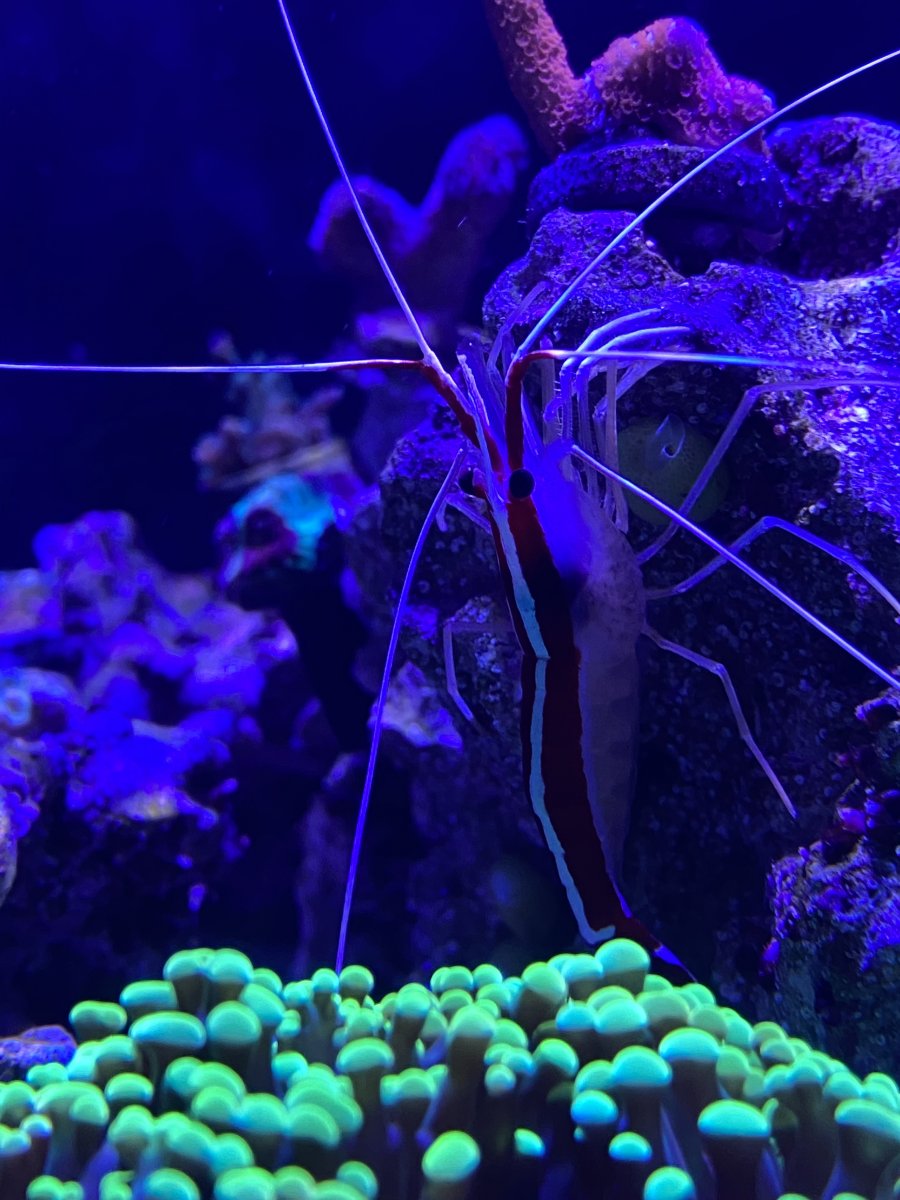 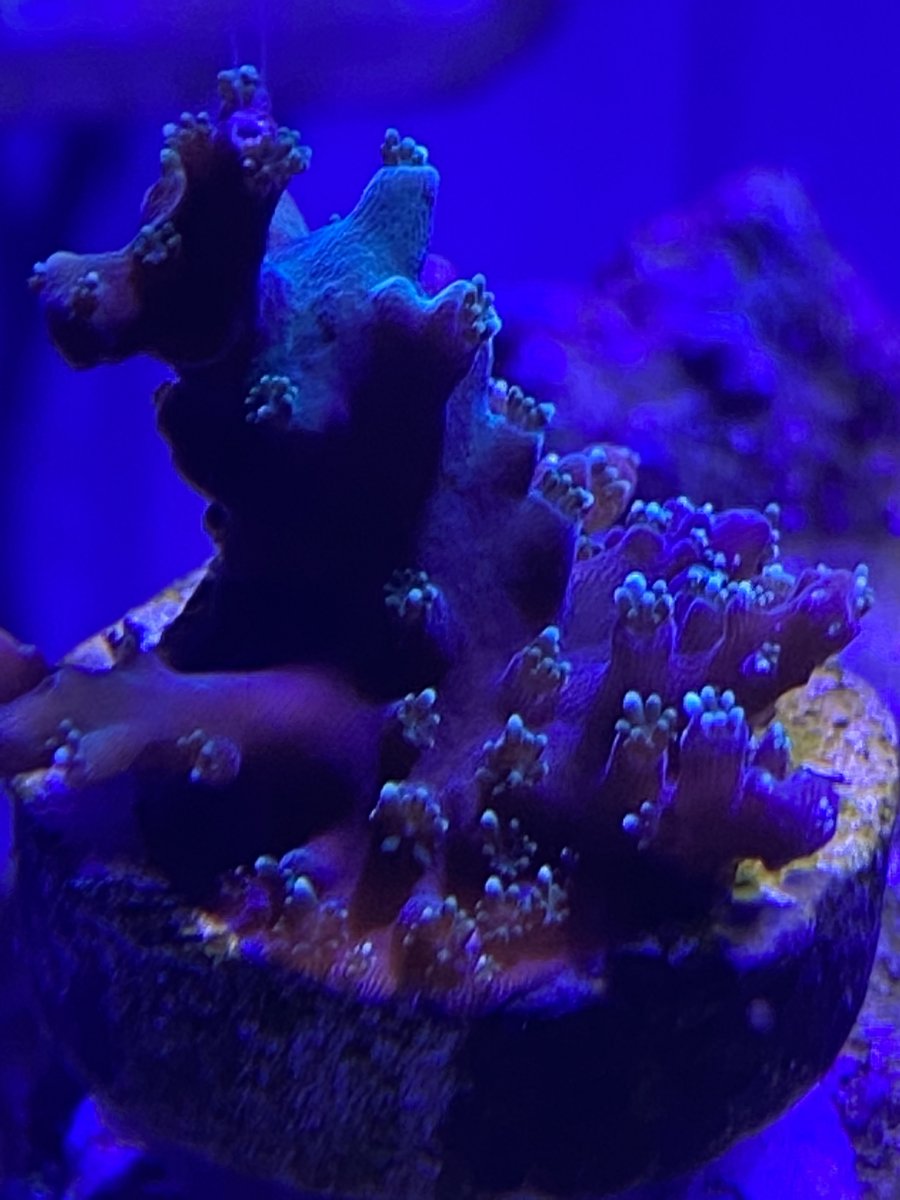 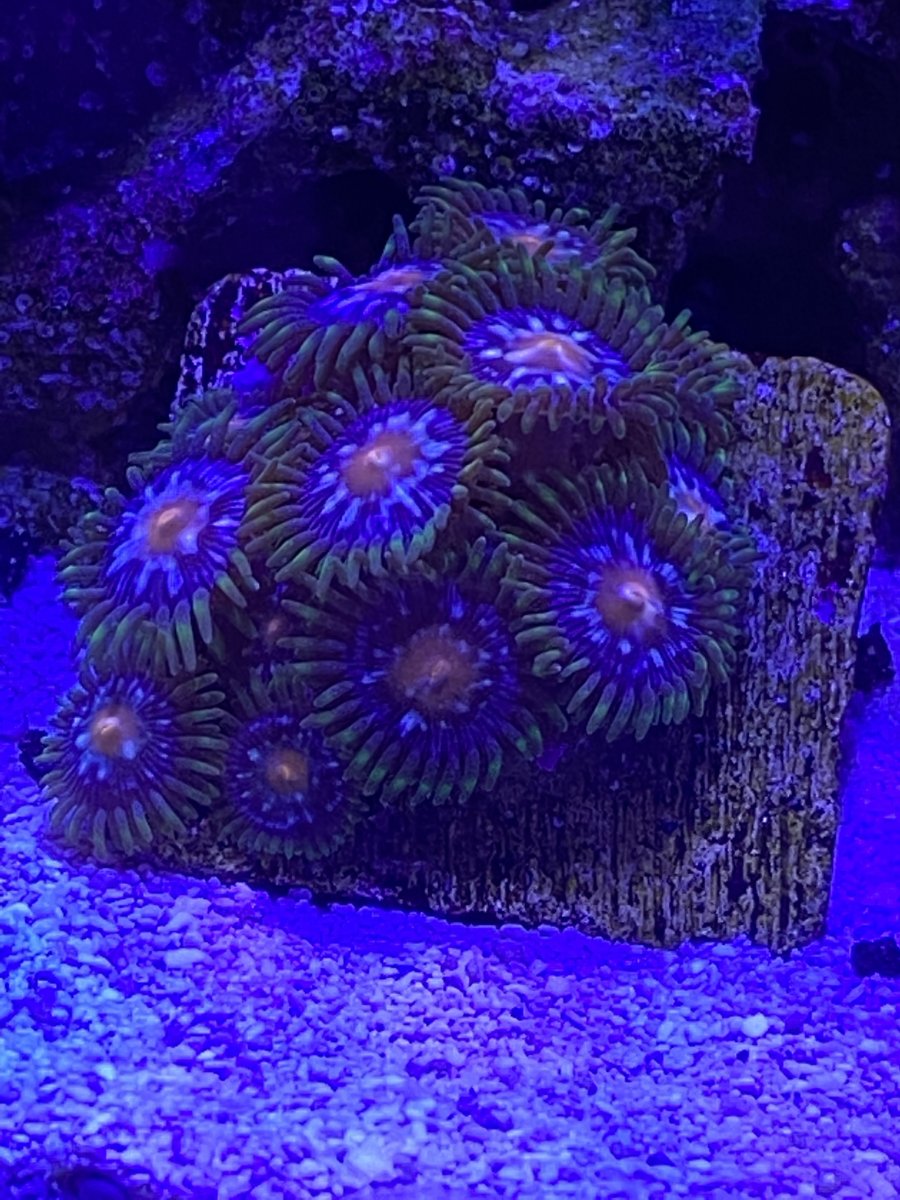 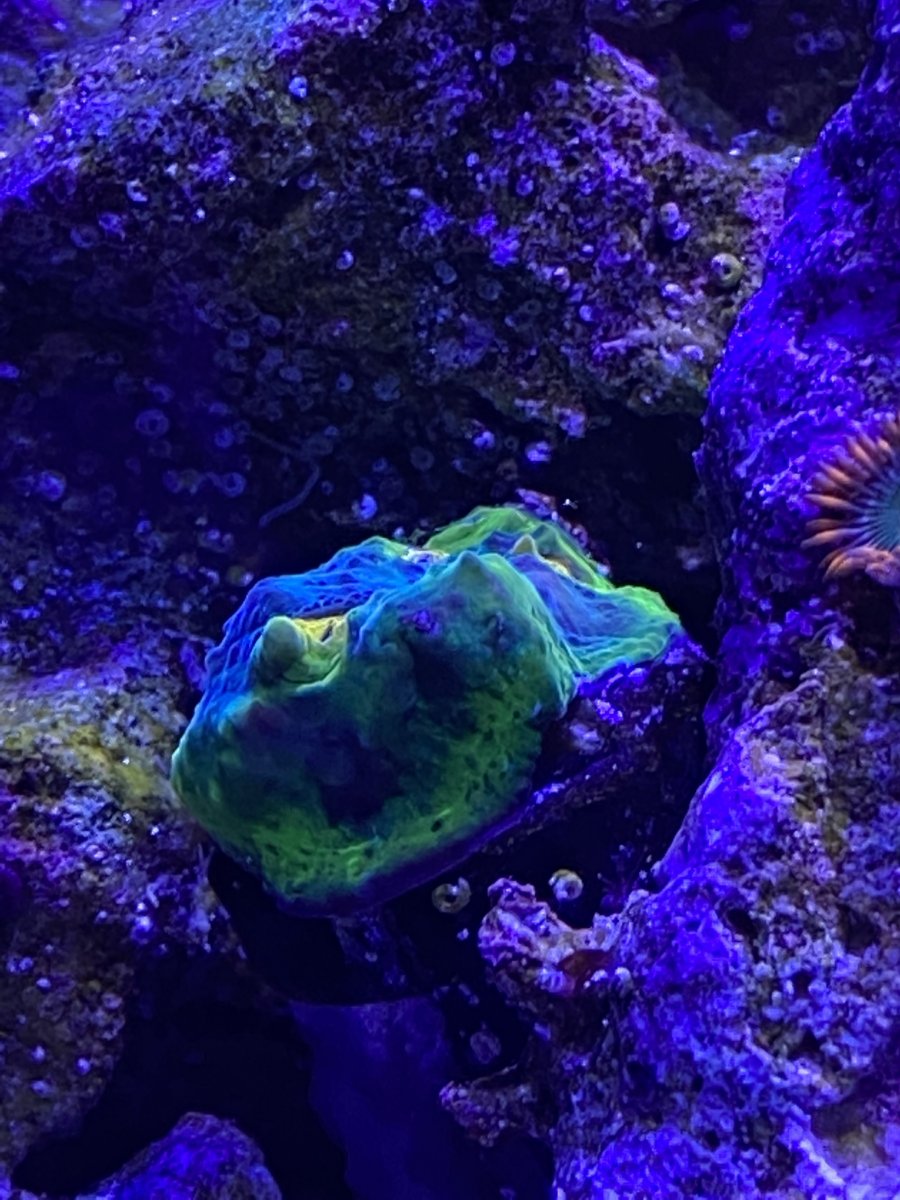 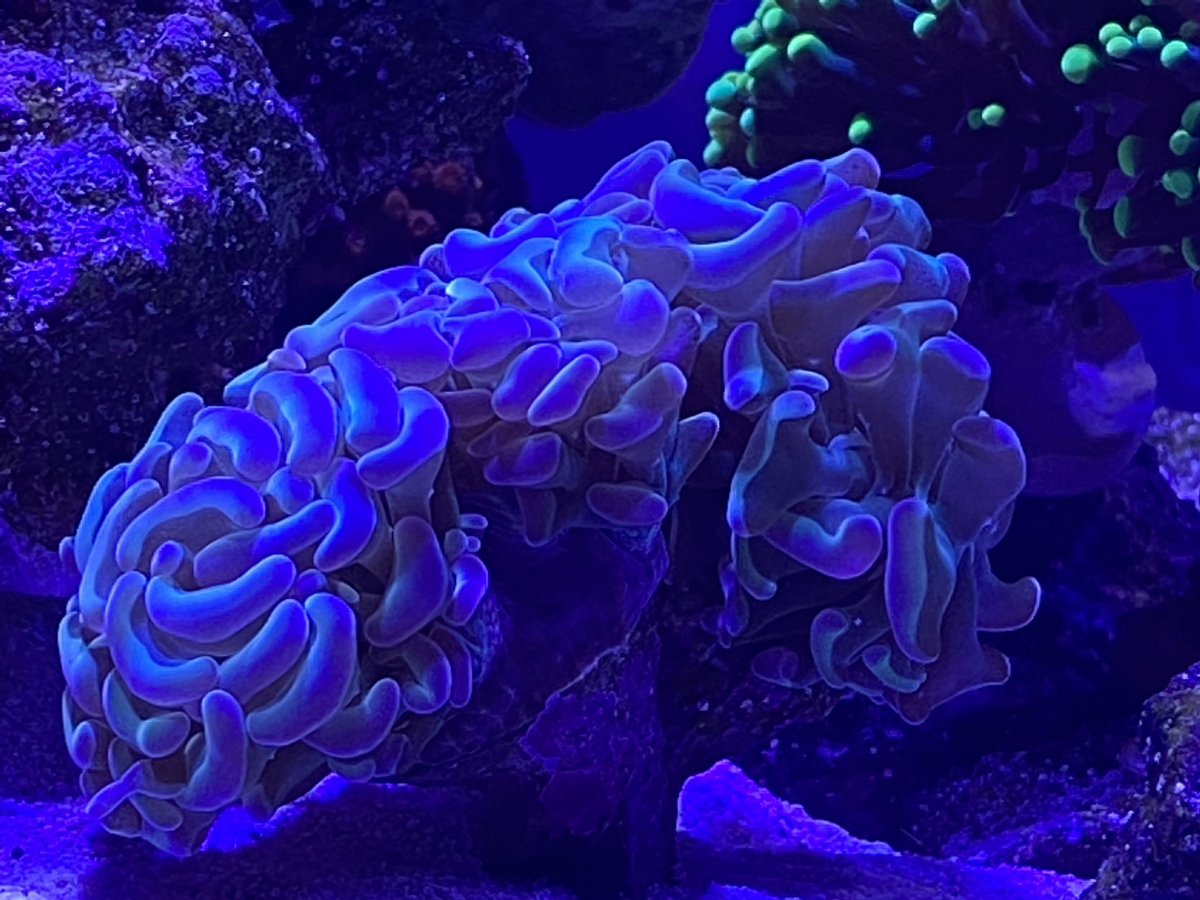 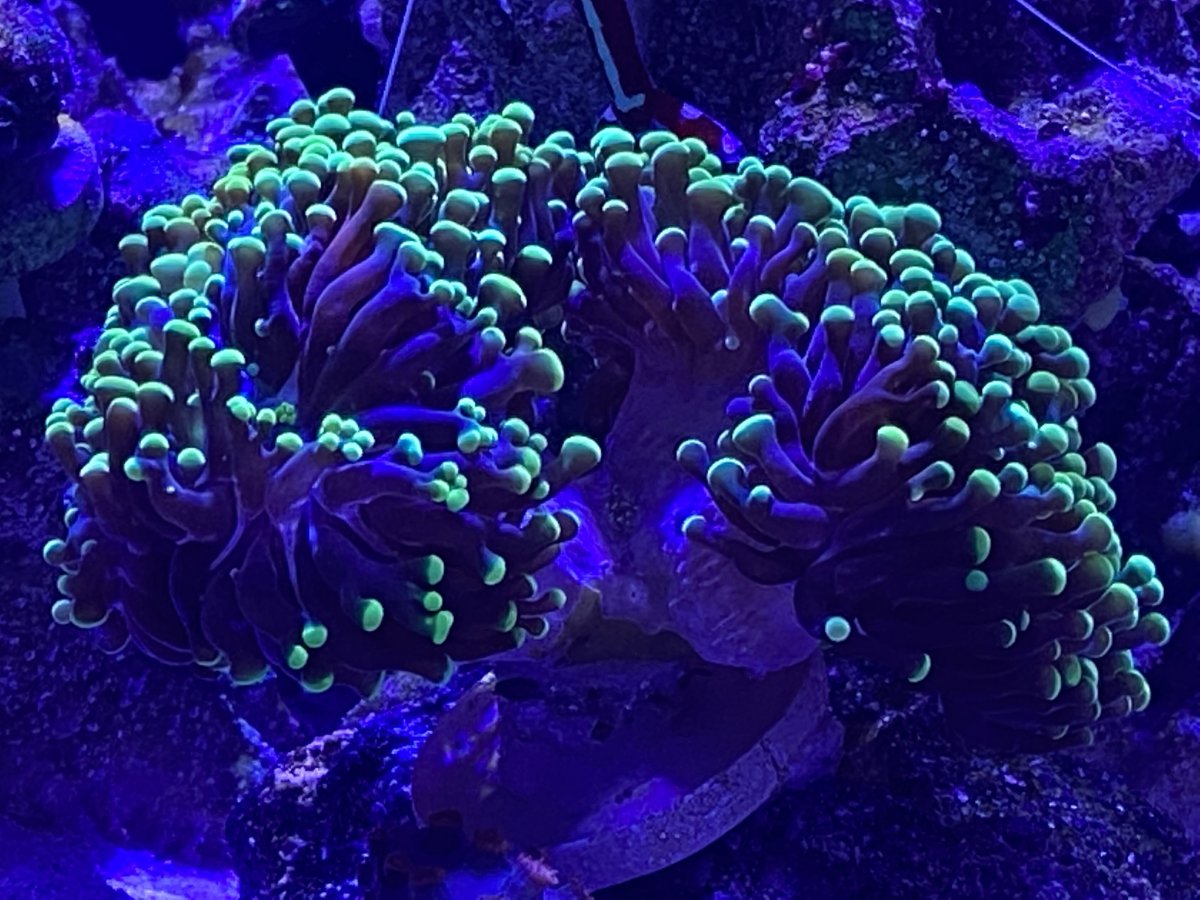 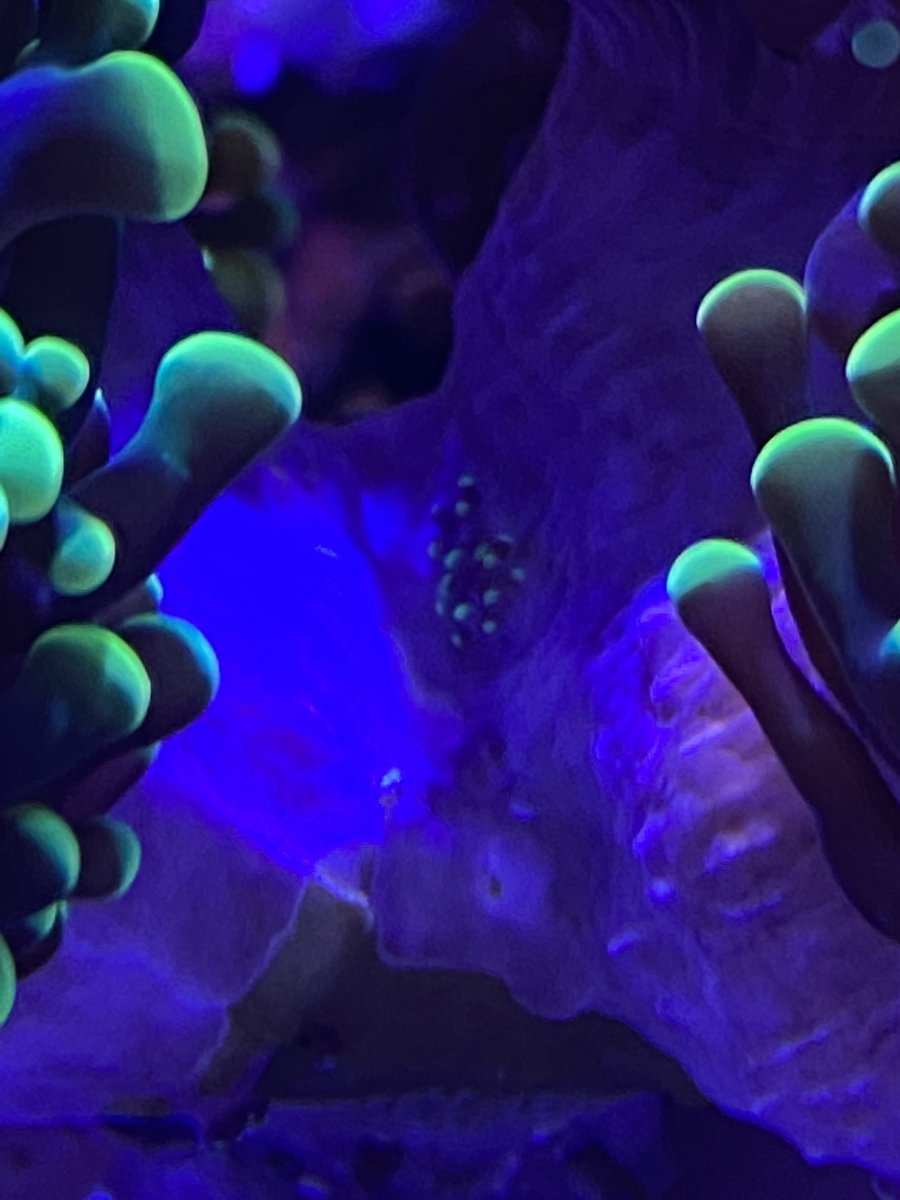 Just a few photos so I have something to come back and compare to down the road.
OP

Ah lovely Florida summer weather. A 15 minute storm knocked out the power. When the power came back on, my Mame skimmer clone somehow started syphoning to the collection cup in the stand, a 1 qt Gatorade bottle. While it was busy overflowing, my ATO that is full of kalk started firing. Alk went from 9.8 to 12.1. Ph is normally about 7.9 when it happened. It jumped to 8.3. I did a 3 gallon water change and swapped the ATO reservoir for a bucket of RODI. Ph is 8.1 now, alk is 10.5. So now I’ll monitor alk until it gets back to 10.0 hen I’ll put the reservoir with kalk back in the loop.
OP

Post disaster report, a 3 gallon WC immediately after, ran the ATO without kalk, a two gallon WC after I smoked some pork ribs, and every thing is good to go. Everyone is happy except maybe the cyphestrea.

PH, while still low is back to normal range, . Alk is now 10.0, where it belongs. I’m just a hair shy of 1.026. I’ll make that up on the next WC. No losses and I may end up switching to a higher alk and ph salt (I have to anyway, I use aquarium solutions mag pro +. No longer available in the states.) I’m going to try basic reef crystals.

Well, what was once a fish only with a couple of vermetid snails is all of the sudden an environment that the vermetids thrive in. Lots of pods, 450 cal 10 dkh alk and 1350 magnesium, and 5-ish ppm nitrate. I went from a couple to hundreds in a very short time. Particularly after I started crushing them with a piece of acrylic rod.

John @reefcleaners got my order last night. I’m going to try bumble bee snails and if that doesn’t work, all of the rocks come out and I will crush each and every single vermetid snail then rinse off in a bucket of clean saltwater. If that doesn’t work, my little rig gets a reset… not excited about this.

Could be a favia behind the candy cane. But I’m definitely not experienced enough to distinguish. Nice tank BTW!
OP

olonmv said:
Could be a favia behind the candy cane. But I’m definitely not experienced enough to distinguish. Nice tank BTW!
Click to expand...

It is, it’s a Christmas Favia, it looked pretty sickly back then. It’s healthy now and the polyps are full and colorful. The sweepers are many and love to come out at night. It was a freebie but I am starting to really like it as it colors up.
OP

No real updates. But I bought an ice cap macro lens with filters. Way better pictures. 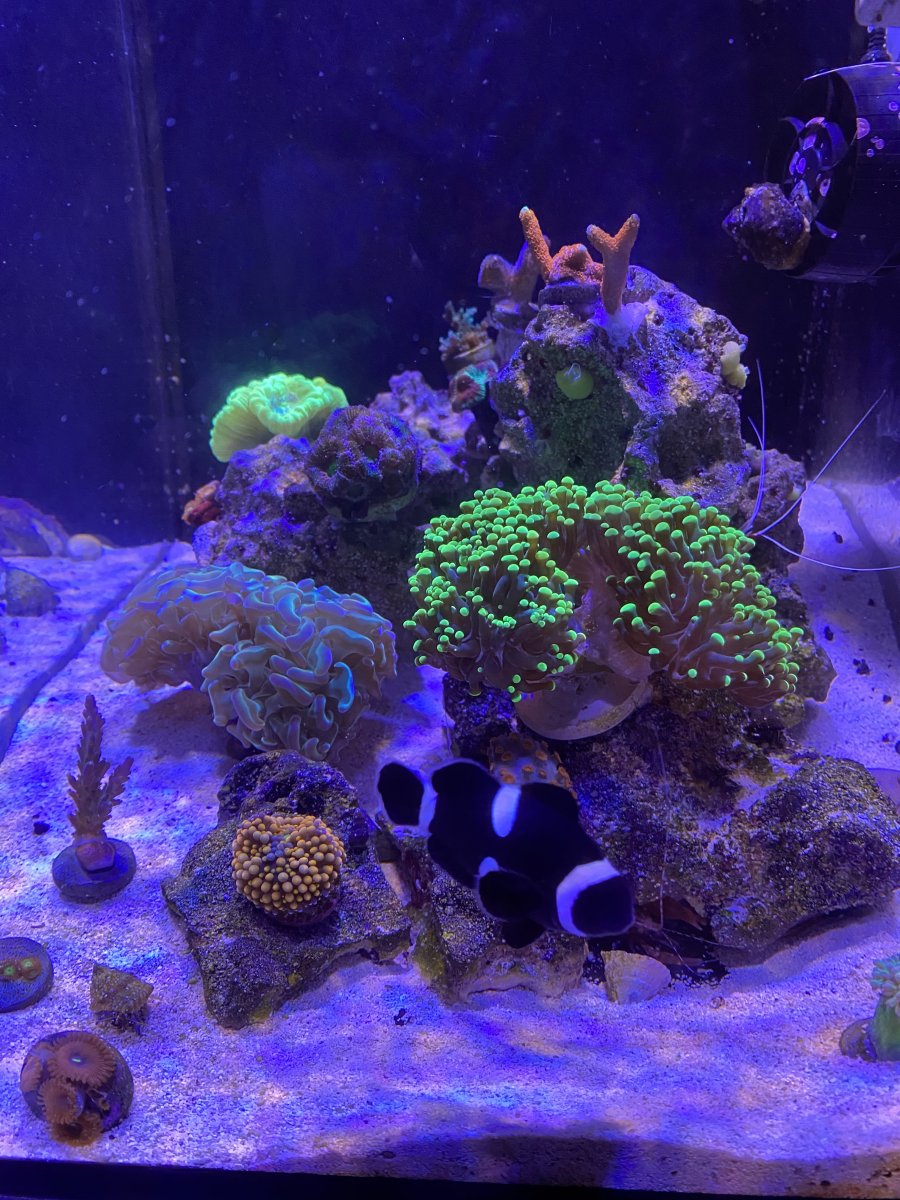 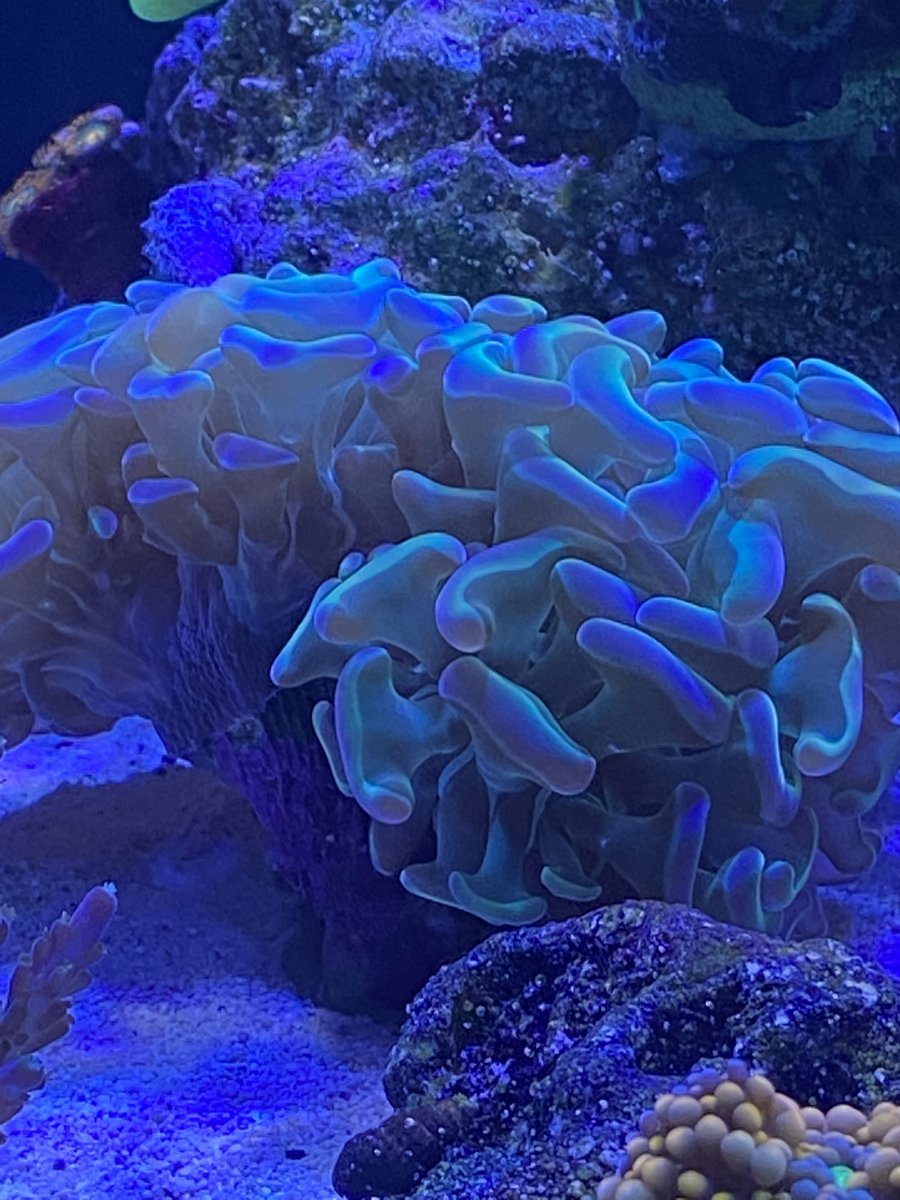 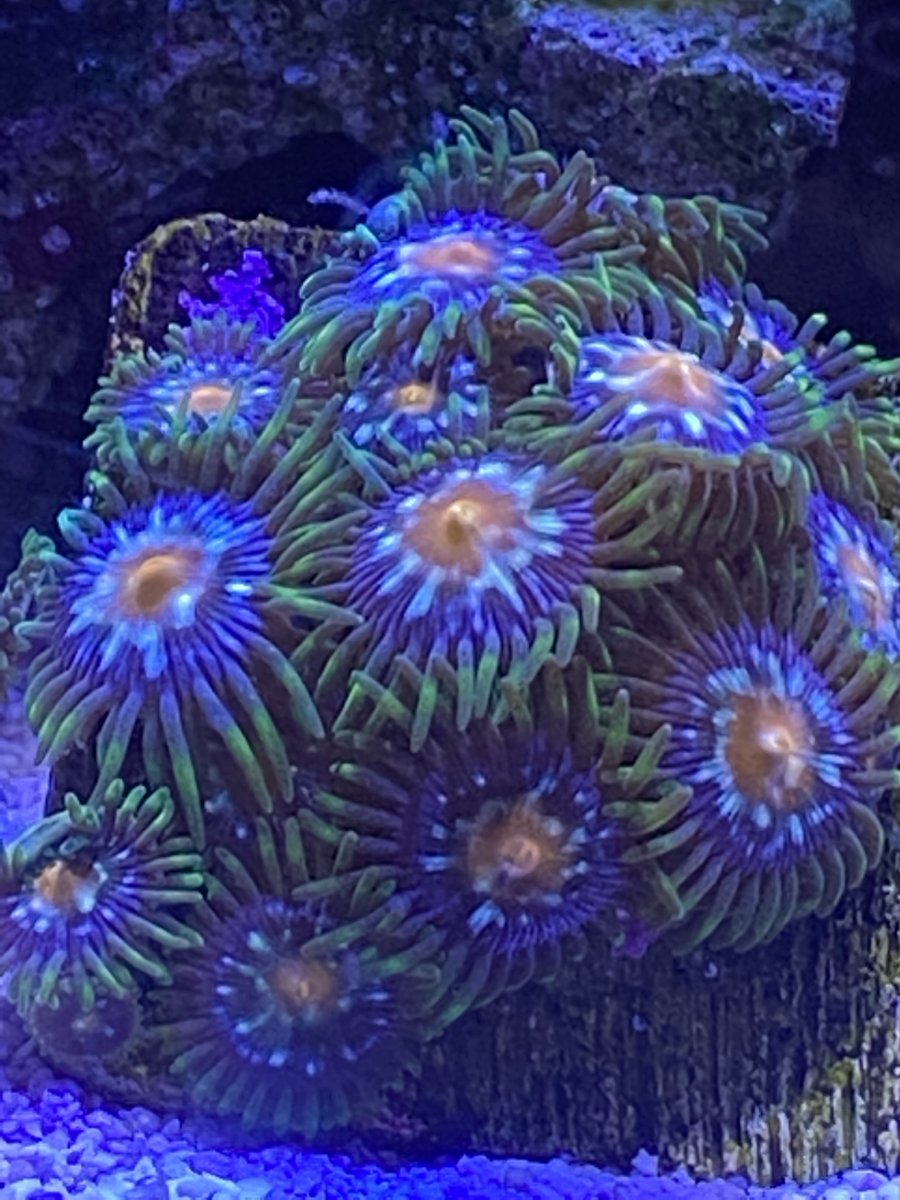 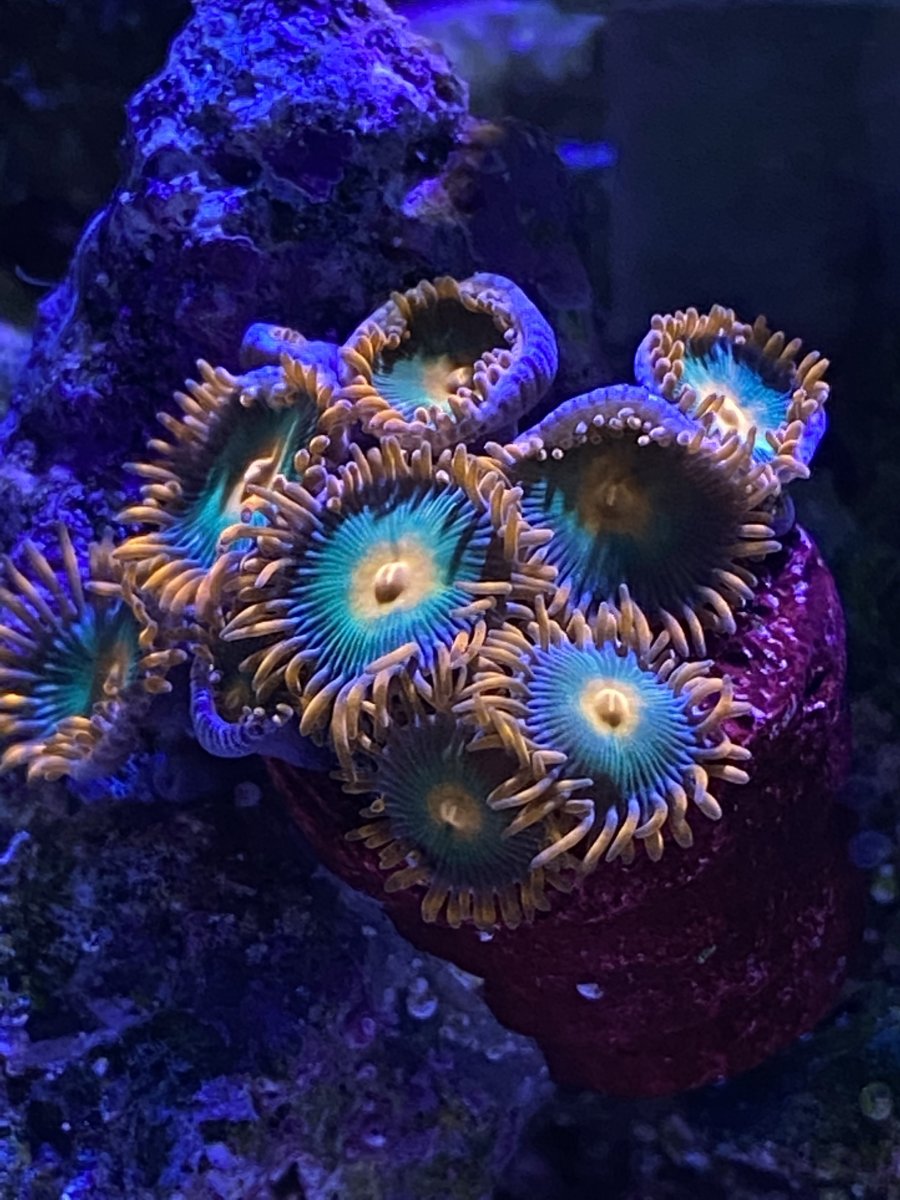 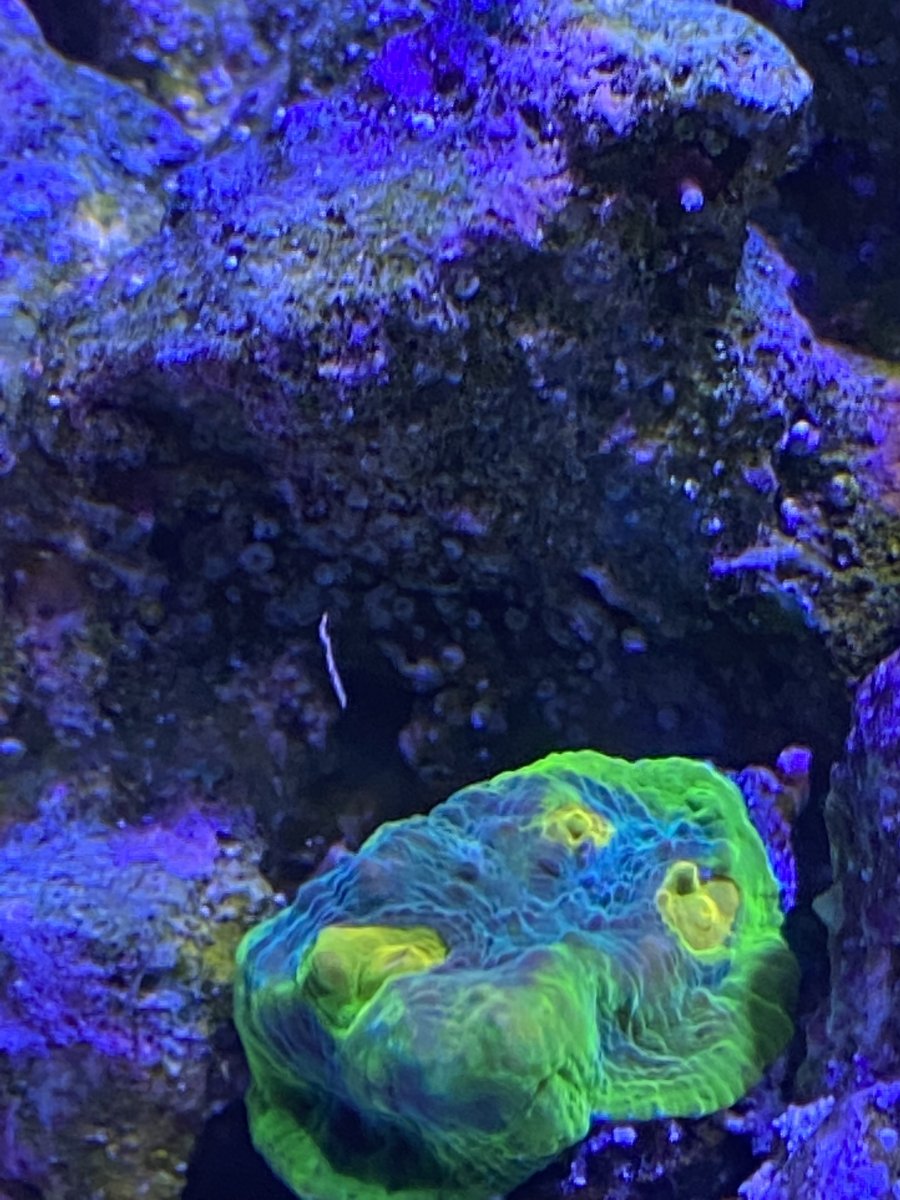 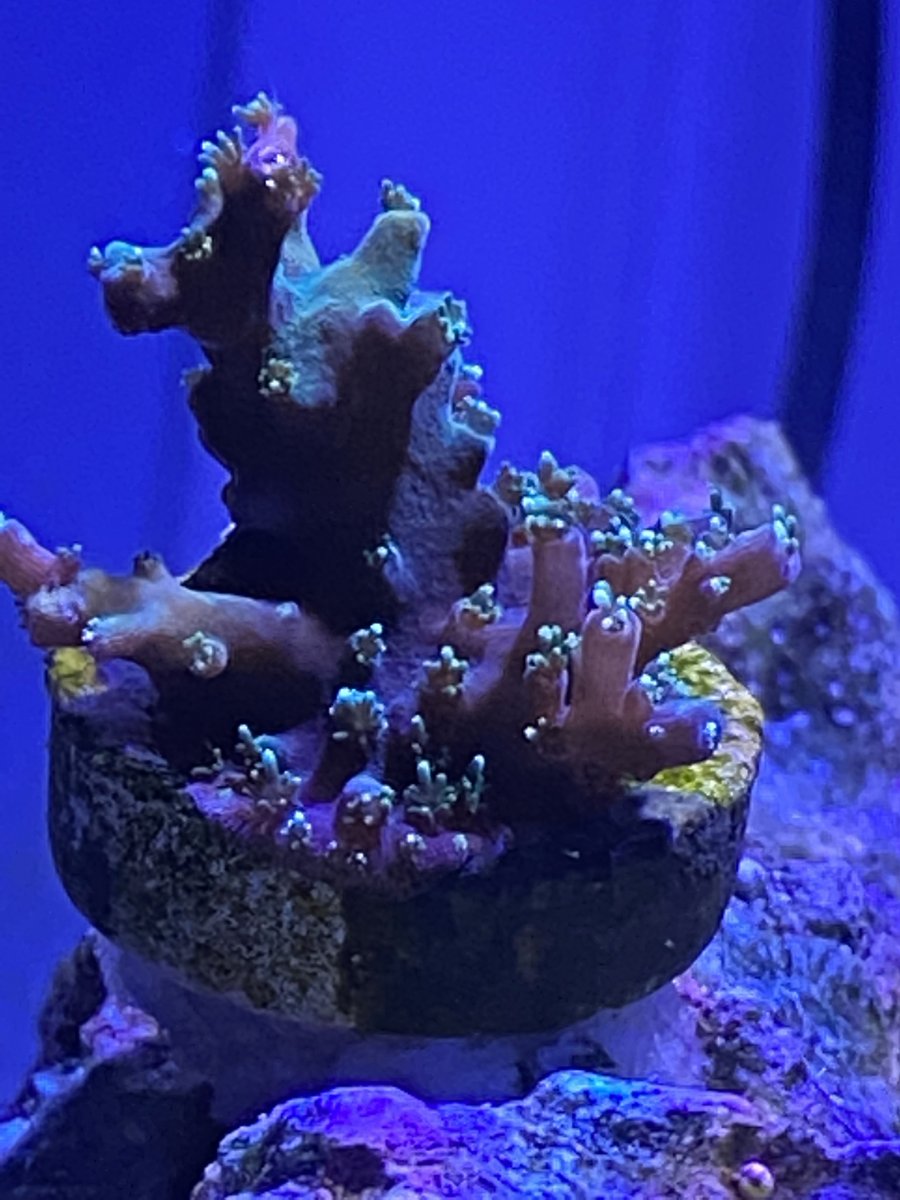 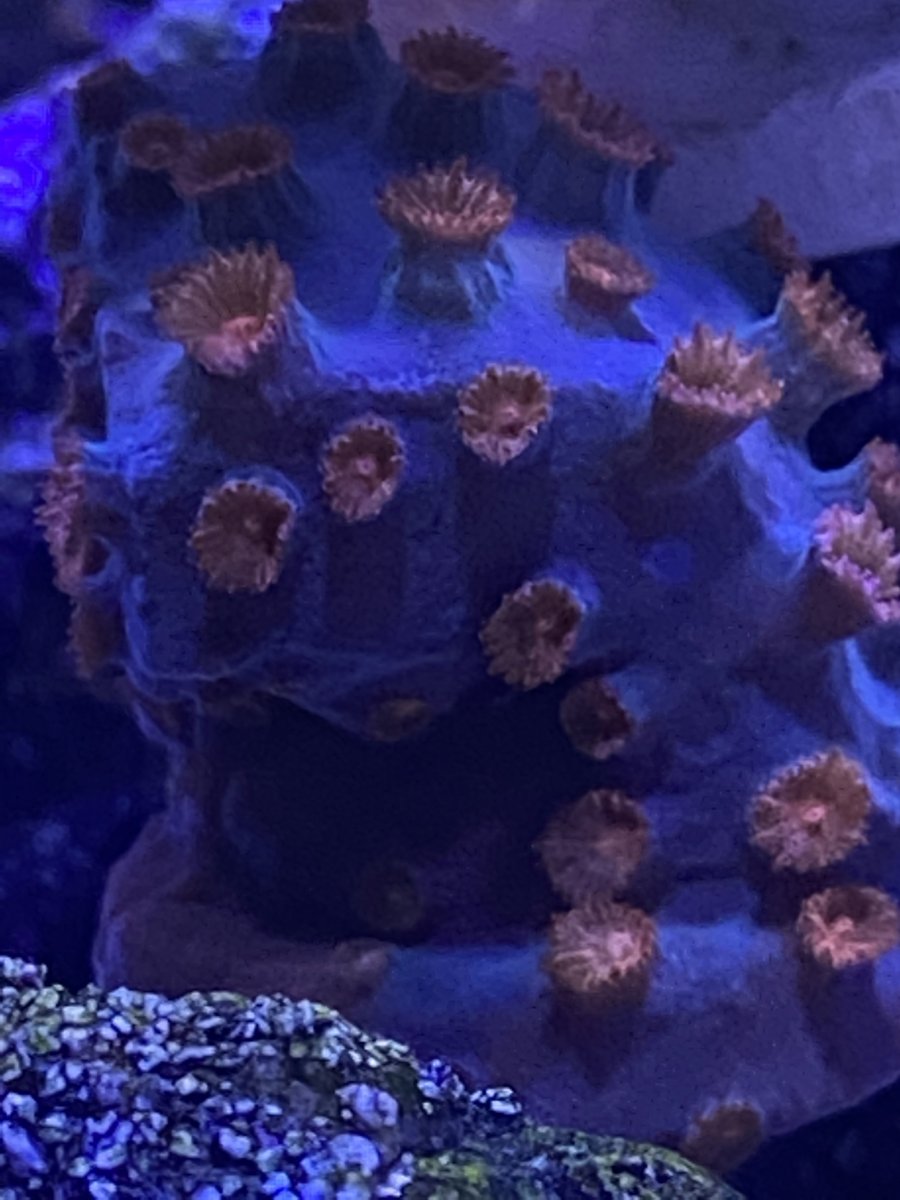 The only thing I don’t care for with the ice cap filters is that it filters out the fluorescent green on the stag horn as well as the bright yellow growth tips on my bubble gum digi.

I’m not taking pictures of those dang things. I hate them. Seriously, if the bumble bee snails don’t handle it, I may move everything to my 25 lagoon build that I’m working on. Just keep the 14 gallon peninsula for a QT system.

Townes_Van_Camp said:
It is, it’s a Christmas Favia, it looked pretty sickly back then. It’s healthy now and the polyps are full and colorful. The sweepers are many and love to come out at night. It was a freebie but I am starting to really like it as it colors up.
Click to expand...

Ain’t nothing wrong with a freebie especially when it goes from ugly duckling to swan!!!
OP

All zoas, palys, and the Duncan are going to my night stand pico cube
Last edited: Jul 6, 2021
OP

8 months ago, when I moved into the new house, my movers bent my APS stand for this tank. I went to Walmart and bought the first thing I found that would repurpose as a tank stand. An ugly night stand: 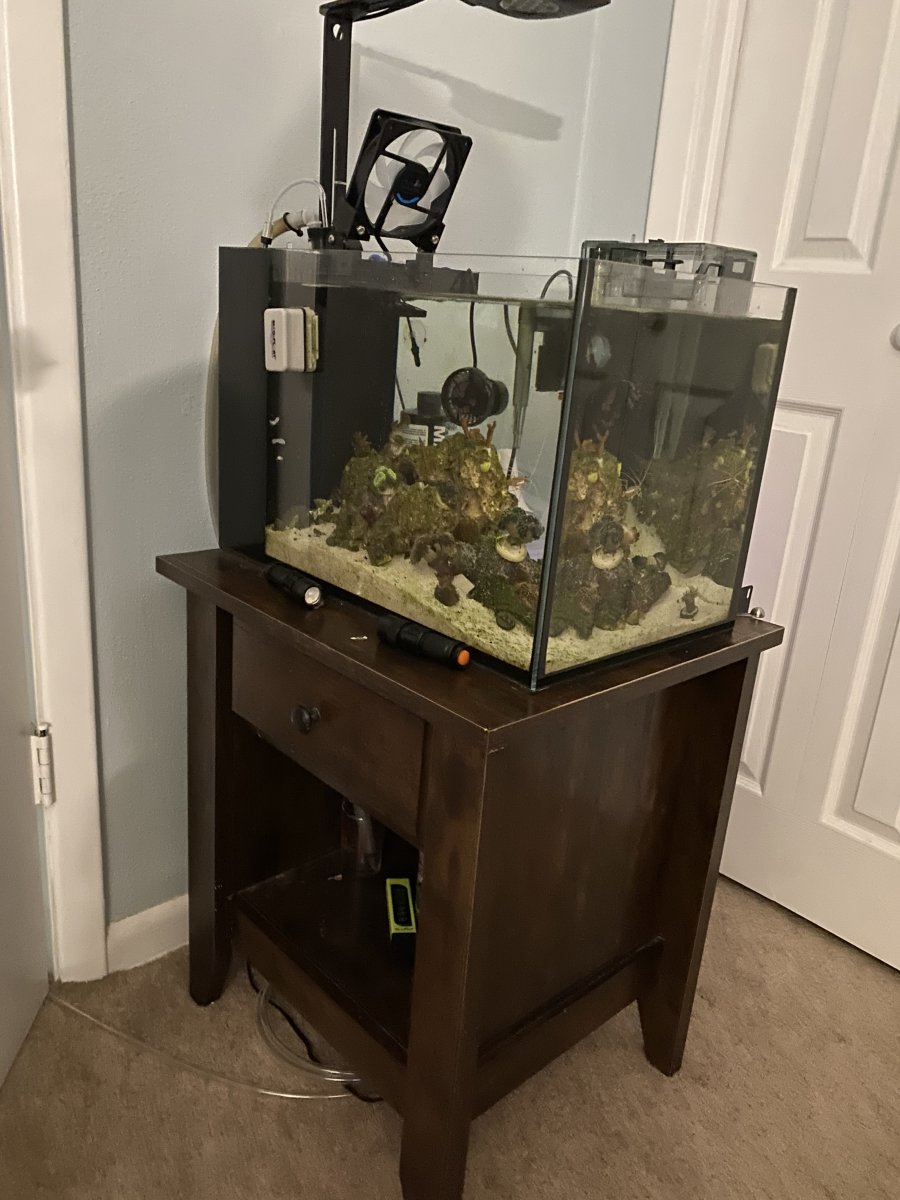 the tank has sat on this thing, in the corner, behind a door for 8 months….

8 months ago I also bought a sheet of 3/4 maple. I immediately ripped it down to 2x4 sheets and put it under my bed to keep Florida’s humidity from doing it’s thing.

Today I had 4 large cups of Volcanica medium light roast Ethiopian. I finally started what I intended on doing 8 long months ago. 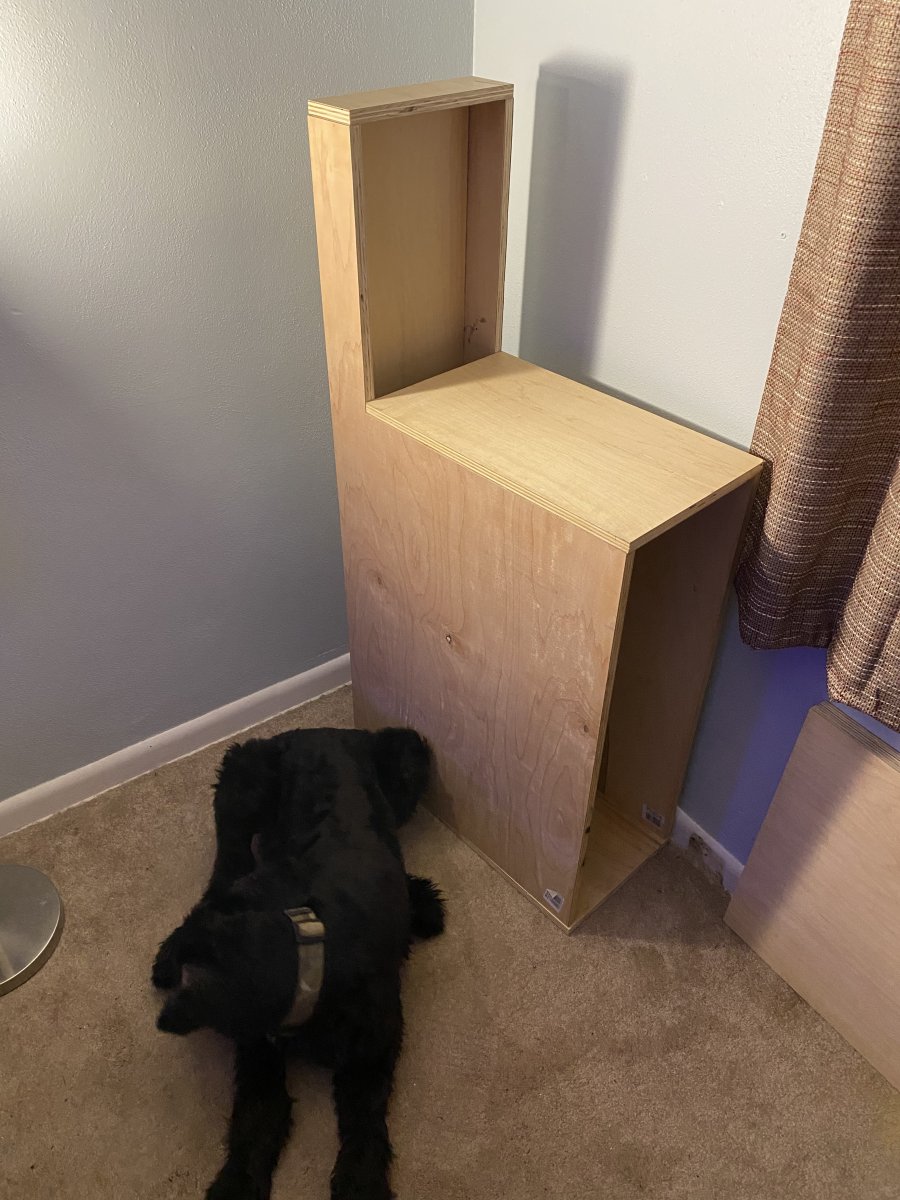 The lack of haste hasn’t been all procrastination. Regardless, I’m finally getting this done.
OP

Made an equipment change. The rubber stopper I used in my DIY reef glass skimmer has finally given out after three years. Rather than look for the other 9 stoppers that came with the worn out one, or ordering new stoppers for 10$ like I did last time. I did the responsible thing and spent $130 on a Mame skimmer.

I am stunned at how nice this is. It has a tiny footprint in the second chamber of my AIO. The hand blown glass body is not the only thing they paid attention to. I’m traditional Japanese fashion the attention to detail is mind boggling. Every part selected and piece made is robust enough for the task assigned without being an eyesore. The mounting bracket and hardware were extremely easy to figure out despite the Japanese only directions.

These skimmers do require maintenance, monthly you have to install a new lime wood air stone. They are cheap on eBay but expensive from aquarium supply joints that do have them. Yoh also must supply an air pump. It broke in quickly and is pulling a lot of yuck that my acrylic body DIY air drive skimmer wasn’t pulling out.

If you need a tiny skimmer that works and don’t mind paying for it, this little thing is a beast. I d as would have taken some pictures but I was too excited to get it in my tank.

The tank is cruising along also. last week my alk consumption went through the roof then growth stalled for a bit. But a 30% wc, dosed the big 3 up to my preferred levels, and mixed a new batch of Ato kalk. Everything is back to normal.
Last edited: Jul 31, 2021

AIO Build It begins, Townes is getting back into the hobby after 2.5 years off, with a IM 25 Lagoon LPS build (including DIY Baltic Birch stand).