Is reefing the only option?

AdamB said:
I totally agree! Though I having to dose Exit due to a flatworm issue in my reef tank. First time I’ve ever had this issue. Just hope my $$$ acans do okay. A little nervous ! Lol
Click to expand...

I got flatworms too.everyone is saying get a wrasse so I’m probably going to once I find one I really like. I try not to put basic fish or corals in my tank. I want the finished product to be LEGIT

As an avid tournament bass angler, im planning and researching native tanks. I really want to set up a giant native tank with some pet bass. It seems it can be difficult and sometimes extremely easy. Most people ive seen use a couple fake plants. but i want to use real plants and some transition from sandy to rocky with some wood, much like alot of our lakes up here in Wisconsin! This wont be happening anytime soon but it is something i will have someday!

goodReefer125 said:
I got flatworms too.everyone is saying get a wrasse so I’m probably going to once I find one I really like. I try not to put basic fish or corals in my tank. I want the finished product to be LEGIT
Click to expand...

Not good. My acans are not looking well after dosing Exit. Of course I could believe how many dead flatworms came out of every nook and crannny! I have been siphoning them out for the past 3 days! I would have needed an army of wrasses.
The cool looking wrasses will not eat flatworms unfortunately. I had a six line in my other tank.. I’m like you . Sort of boring !
I’m wanting to get a flasher wrasse in the near future .

I have a US native tank with dollar sunfish, darters, red belly dace, bluefin killifish, and a madtom catfish. Most of those are more colorful than tropical fw fish, especially when they get in the mood to spawn, usually when the temperature drops.

It’s kind of hard to capture his colors with my phone camera, but this is Money. He’s electric blue and red with an orange belly. 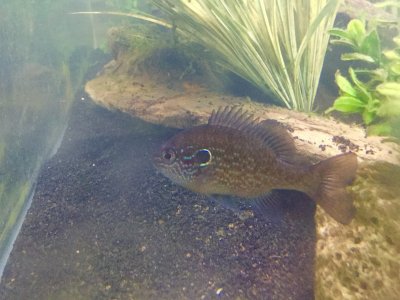 I would like to say if I HAD to get out of reefing, then yes I would do a planted freshwater. I actually came very close a month or so ago. I had 3 reef tanks. 1 was a 10gal Nuvo Fusion. It was utterly encased in cyano. I could not beat it. I tried hard. I removed the rock, soaked it in peroxide, scrubbed it with a brush, cleaned the glass, removed the top layer of sand, 100% water change, and it was back within a week. I felt defeated. I let the tank go. I removed the inverts and but them in a different tank. I then tore the tank down and let it just sit on my porch. I talked it over with my wife and said i am done. I am just gonna do a fresh water. I even went and looked at plants and started doing research. The day came I was going to go buy substrate and start it.... I couldn't. I called my wife at work and said, I can't do it. I cannot turn this into a freshwater system. I told her I cannot admit that this tank has beaten me. I want to be successful at a 10gal reef tank. She said ok, you can try again. So I decided to try again, and that is how current build thread was born. I will not let the nano defeat me!
L

Got my start in freshwater. Moved about a year ago, breaking down 4 tanks. Set up one saltwater tank, so for the first time in over 35 years don't have freshwater tank. Well... doesn't include my koi pond outside.

I would just go back to FOWLR with triggerfish again. Everything I've read, FW planted tanks seem like about the same amount of work as a reef, and probably still more expensive than a FOWLR.

I've been keeping and breeding killifish for over 50 years. I have a reef tank but also a fishroom with about 50 fw tanks. I'm building a greenhouse which will also have fw tanks for the native species and pupfish. Never enough.

Paul B said:
Right, those fish are about 16" long.
You can also see a foot long catfish behind the large fish in the center.
Click to expand...

Freshwater is where it started for me, the usual guppies, mollies etc. I then moved onto south american dwarf cichlids like rams and apistogrammas with tetras and really liked that set up and stuck with them in planted tanks that still retained that riverbank natural look. The next step was a big tank with the rams, apistogrammas and tetras plus a school of 8 red turquoise discus, this was my dream setup and I kept it for a few years...... Then I discovered reefing!

If I stopped reefing I doubt I would go back to freshwater tanks, not after having had a reef tank. I think it would have to be FOWLR if reefing was no longer an option. Marine fish are alot more interesting than freshwater, cichlids are by no means moring, but they're no match for some saltwater fish.

If for any reason I go back to freshwater, I will go back to keep Discus. I still have some pictures on my phone. 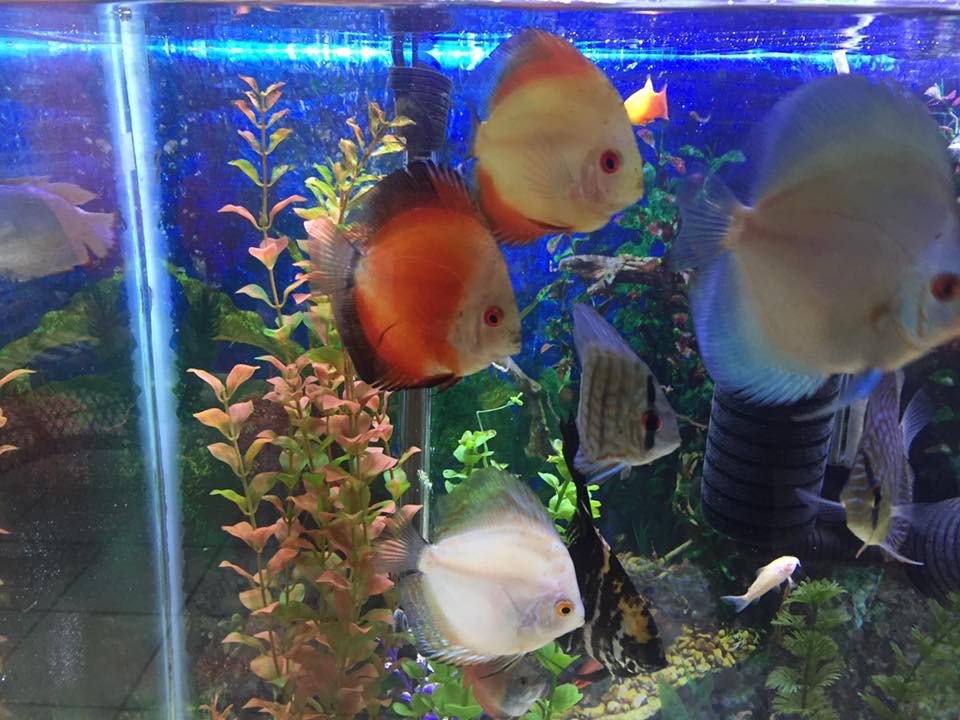 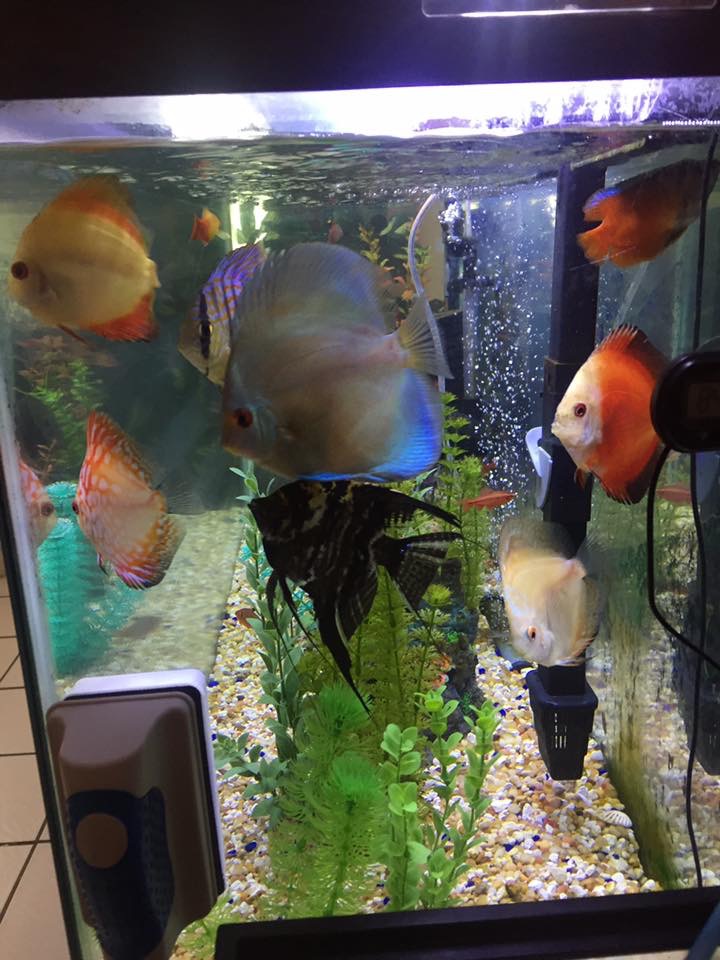 spyder813 said:
If for any reason I go back to freshwater, I will go back to keep Discus. I still have some pictures on my phone.

I want to eventually do Discus, beautiful fish but dang are they expensive.

MichaelReefer said:
I want to eventually do Discus, beautiful fish but dang are they expensive.
Click to expand...

Yep, everything over 5" will be expensive but less prompt to get sick. Also depends on the breeder.

With every major hurricane that comes near, I always say if I lose my entire tank (I do have some precautions, but I work for the power company and cannot be at home the whole time), I would do a native fish tank with some bluegill.

spyder813 said:
Yep, everything over 5" will be expensive but less prompt to get sick. Also depends on the breeder.
Click to expand...

I moved to reefing from freshwater monster style. I really like how involved reef keeping is but I will always have a special spot for large catfish, gar, bass, aro ect. Still have an empty 180 gallon that I want to try salt in

I currently have a freshwater, 29g tank that I've had for about 6 years now. Also had one in CO before moving to DE. But I'm just getting bored with it. I thought about putting more money into it, especially when I read about the saltwater costs, but even when googling ideas I feel the pull to saltwater instead. Red Fish Blue Fish and their tank will likely move to another room once I make the plunge into saltwater tanks.

MichaelReefer said:
My LFS has some amazing Discus, upwards of $55.00 EACH.
Click to expand...

Yeah, you can find that price on the 3" or less but if I would get Discus again I will go for more than 4" and probably from Discus Hans. That guy has some serious Discus but like always..$$$. You get what you paid for.