I've been a hobbyist for about 5 years now, starting when I was 16 and I'm now turning 21, and being of the younger crowd, I could only really dream of owning a larger tank. I started off with a 20g high, and I've had many tanks set up at the same time, but I never really had the money to have a larger tank. A while back I started the long grind to set up a larger tank than my current 36g, saving for months to be able to afford my dream tank (college students don't exactly have a lot of time to spend working at their job). Eventually, I came into the possession of a Red Sea 750 XXL, and my dream began. This is a build progression thread of the tank I've spent 5 years dreaming of and never honestly thought I would be able to afford. This may seem sloppy as I'm actually a bit into the build already and I've just not had the time to create this post until now, so here goes.
This is the build progression of my dream Triton Method SPS Tank.
Last edited: Jan 16, 2019

Friday, November 16, 2018
The beginning of the dream arrived, my custom ordered stand for my reefer arrived at my work, looking as amazing as I had hoped it would. I was beyond excited to get this started, to the point where I'm sure I annoyed my bosses about it. Later that day, I took the stand home and convinced my family to help me lift the heavy 750 XXL that was sitting in my garage. It took a lot of work and a lot of yelling, but we finally got the tank placed and the Trigger Triton44 sump placed inside. 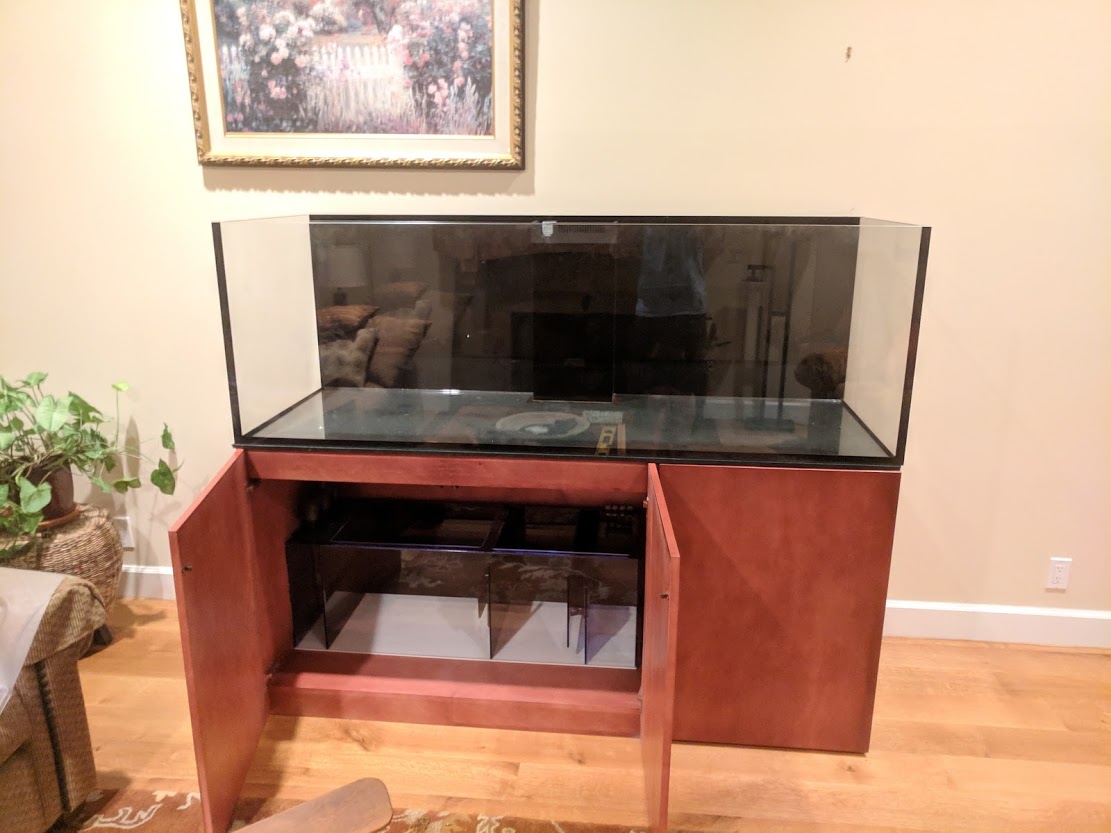 Friday, December 7th, 2018
I am by no means a plumber, in fact, I had a 120g I got from a friend that I spent 6 months trying to plumb and got so frustrated with how unprofessional the whole setup looked (not just the plumbing) and how it wasn't the right size, I actually sold it to get it out of my sight. Being OCD and not having a lot of money to spare is a real bad combo I guess. Knowing how bad of a plumber I was, as well as understanding how much this tank meant to me, my boss himself decided to come out and plumb my tank for me, doing it right so I could actually move on with the build. We used Metric to Standard Unions on some of the default red sea plumbing to make this tank look unique and allow me to use a different sump than the stock sump. It took a few hours but I actually learned a bit and I'm incredibly happy with how it looks. I'm not sure if I can give a shout out to my boss on here since I work for a LFS and that would technically be advertisement, but I hope he understands how grateful I am if he sees this. We test filled it with tap water and he left after we made sure there were no leaks. Over the next week, I drained the tank and played around with my rockwork, being super indecisive about what I wanted it to look like. Eventually I decided on the rockwork and the rest is history. Sunday, December 16th, 2018
My RODI is only a 75gpd unit, so I took me quite some time to fill the tank, eventually I started making progress. I almost forgot to add my sand, so I did this at like 1 in the morning, I definitely regretted doing this during class the next day. Wednesday, December 26th, 2018
Like I said, filling took forever, but eventually I got it done. Tank is finally full of water, and I'm incredibly excited. 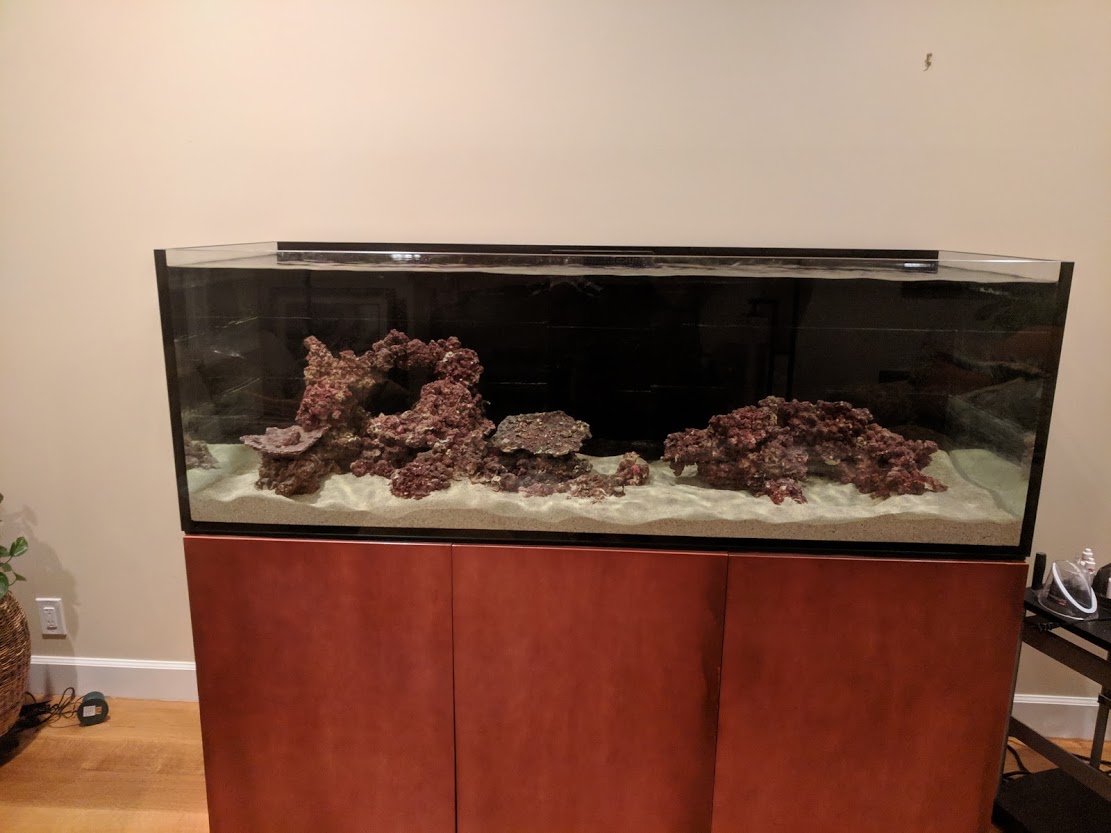 Thursday, January 3rd, 2019
So this is where I realized part of my dream, my Mini Bubble King 200 VS13 Extra Slim (god that is a mouthful) finally arrived and I finally understood how much quality equipment means when you make a dream build. Definitely happy with this thing. Thursday, January 10th, 2019
So through the magic of live bacteria and ghost feeding, my cycle actually only lasted about 2 weeks, so at 2 in the morning, I added a fish I had been quarantining for about 6 months (I had nowhere to put him until now)
Here is a photo of my first addition, a Pyramid Butterfly. After fixing a heater issue that had him hiding all day the next day, he was swimming about happy and hungry by the 12th. That's all I've got so far, currently trying to figure out how I'm gonna get the money to get corals in here by my birthday. Still need to get my t5 retrofits, 3 more radion xr30s + diffusers, a fuge light, a chiller, an ato, an ato reservoir, an apex, and a lid on this beast. I've already got my mp40s tucked away, but dang these builds are expensive. I'll update this build as I get more stuff.

Looking good so far! I know how expensive it can be to get going...my 120 took the better part of a tax return, and we buy mostly second-hand.

Looking forward to updates, love the pyramid butterfly. I’d like to have one myself
OP

SPR1968 said:
That all looks great so far and thanks for sharing all the pictures with us

Thanks, it took me a couple of attempts and I went through a lot of aquascaping articles to design something I liked, but I'm pretty proud of it now
OP

ngoodermuth said:
Looking good so far! I know how expensive it can be to get going...my 120 took the better part of a tax return, and we buy mostly second-hand.

Looking forward to updates, love the pyramid butterfly. I’d like to have one myself
Click to expand...

You're not kidding with the price, all my friends have got themselves new cars, and I got myself a fish tank. I feel it's worth it in the end though, definitely more fun to me.

This is a great build. Really nice looking setup and I like your skimmer choice. Can’t wait to see how it performs on this 750 xxl.
R