Webslinger said:
Wait nobody has a 6-line that isn’t a terror!
Click to expand...

I didn’t know 6 line wrasses were supposed to be a problem until I started reading stories here. Mine just prowls the rocks all day long, searching for pods and worms. Couldn’t care less about any of the fish in my tank. I almost don’t believe the horror stories...

codycolina707 said:
I've had one 1 year no problems
Click to expand...

give it another year
G

Vette67 said:
I didn’t know 6 line wrasses were supposed to be a problem until I started reading stories here. Mine just prowls the rocks all day long, searching for pods and worms. Couldn’t care less about any of the fish in my tank. I almost don’t believe the horror stories...
Click to expand...

My 6 line was fine with any established fish, but it was aggressive towards just about anything new that came into the tank. The problem was it was also smart and impossible to catch, so I couldn't get rid of it either without taking the tank down. He survived a tank crash and an outbreak of velvet as well, but subsequently didn't make it (after I'd owned him for a couple years) after a few weeks of treating with copper in QT. At least that allowed me to get new fish...

I did have 2 pairs of clowns in a 40 gallon tank - a pair of bullethole ocellaris and then adding a pair of black and white ocellaris later. The bulletholes couldn't figure out hosting an anemone for the first year and a half (to my disappointment) when they were the only clowns in the tank, but then I added the black and whites. They briefly went after the new additions, causing the black and whites to take shelter in a couple anemones. After a couple days, everything settled down and from that point they all got along fine (and the bulletholes even learned to host). So it all worked out perfectly.

I am always conflicted with these threads. Now clearly the original rules are not ones people go by often, but I hope when people are looking for compatibility they take stock of all the folks that say it didn’t work for them, we - myself included although I try and get better about it, often just search for the 1 in 50 that say it did work and boom, there is our evidence that we can do it! When in reality that was a very small chance of everything getting along. I have lost livestock before thinking well tommy2tonerocks was able to do it! That general rule is totally wrong! ... when really it was spot on and now not only have I wasted money, but worse I had an animal under my care die.
Last edited: Jun 29, 2020

Lightspeed said:
Not wanting to hi jack your thread, am wanting to experiment with the bending of so called rules as well.
My target 2 fish for my build will be 2 Pomacanthus angels known for pecking at corals, so i decided to do some research which i have only just begun.
So its not that i want to ignore everyone sharing their experience saying these angels are the devil regarding Lps and Softies that are not toxic or whatever that means.

says that my 2 target species do not actually eat coral or Tridacnid clams, they actually are consuming the mucous from the surface of particular coral types, a bit more research and i found an interesting fact regarding some coral mucous types and its proteins.

So i am am going to try this out as i will have more than enough room for happy angels, as stated by others, common knowledge or experience is relative and subjective only until it is not. That is why it is evidentiary that this hobby is constantly evolving and without those that push boundaries nothing new is discovered.
Yeah i don't mean you can keep shrimp with your Lionfish

Anyway here's a small link that i found regarding coral mucous proteins and the clues as to why some marine species see it as a valuable food source, which kind of presents a dilemma.
Do you A: Simulate these proteins and feed in the hope certain species leave your corals alone.....
or B: By simulating these proteins are you inviting particular species and condoning food source behavior by feeding such proteins............Or C: by feeding enough regularly and sourcing the correct tank raised fish can this dilemma be avoided altogether. 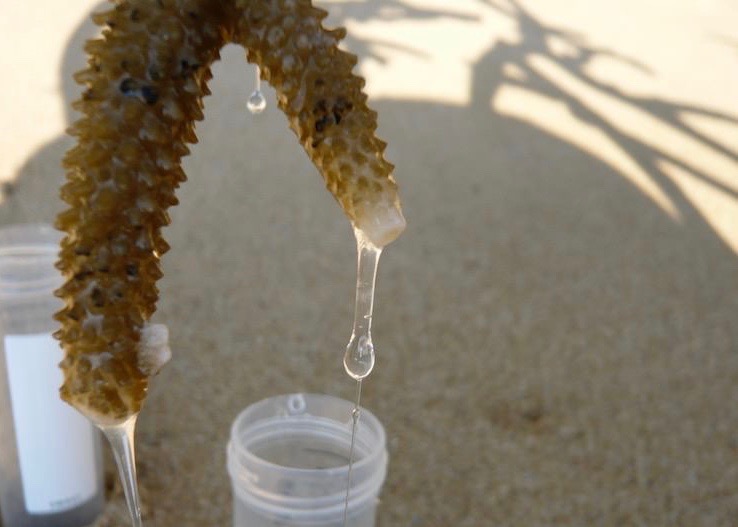 The role of coral mucus 101

Why do corals release mucus?Corals are known to release mucus from their body into the water. But why do they release ...

Regarding untactful comments, unfortunately it would be nice to see more consideration or self reflection given at times as to how one responds and replies in forums, take it with a grain of salt or at times an entire bag
Click to expand...

Good article thanks for posting...............if you do some digging on the forums you can find what specific species of the large angels eat in our aquariums. I know there are a lot of reefers with them in Sps only tanks.

Not sure on softies as there are some larger angels that will eat zoas like candy and devour lps types like acans,blastos, ect.
Last edited: Jun 29, 2020

Please take this with a grain of salt. R2R is community and we are here to help one another and be a place to “get away” from all the drama of other social media platforms. If you can’t be nice and cordial then please just read the forums and refrain from commenting. Even if you what your saying is truthful there is a right and a wrong way to say it.

GoingBroke88 said:
My 6 line was fine with any established fish, but it was aggressive towards just about anything new that came into the tank. The problem was it was also smart and impossible to catch, so I couldn't get rid of it either without taking the tank down. He survived a tank crash and an outbreak of velvet as well, but subsequently didn't make it (after I'd owned him for a couple years) after a few weeks of treating with copper in QT. At least that allowed me to get new fish...
Click to expand...

That may be true. All of the fish in my tank now came out of quarantine together. Since I have 5 tangs in my 180 (I'm sure that is breaking a rule), I have no plans to get more fish anytime soon. It won't take long for the tangs I have to grow out, and that is why I don't plan on getting anything new, unless I have some die. I guess I'll have to wait and see how my 6 line treats any newcomers, if I actually do any anything new. I also think that when the 6 lines have more room in a larger tank, they don't get as aggressive. That is only my suspicion, I don't really have anything besides my own experience to back that up. So it would be an interesting test to get a new small fish to see if my 6 line reacts to it.

Obviously no one would be silly enough to add a smaller yellow scopas to an establish scopas?! 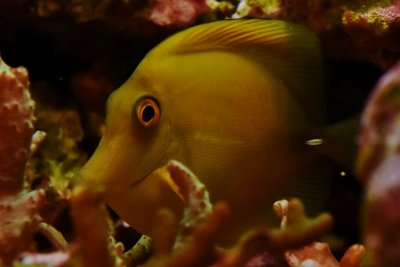 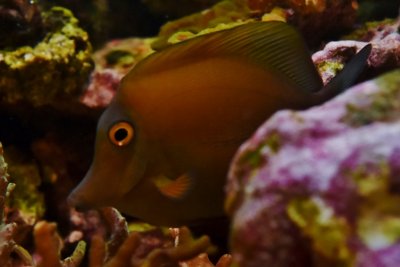 Webslinger said:
Wait nobody has a 6-line that isn’t a terror!
Click to expand...

Mine’s a model citizen. No problems with the other wrasses that were added after it either..

Cory said:
My panther grouper is my regret. He eats supermarket shrimp, nori, algae wafers and anything he can fit in the mouth. My tangs have to fight him for the nori! Not only that but hes approaching a foot long lol. Worst is the wife loves him.
Click to expand...

Indytraveler83 said:
Most of us know the "rules" such as

1) Butterfly fish eat coral and aren't reef friendly.
2) Clownfish live in pairs or harems only.
3) Damselfish are the devil.

How often do you break the rules, or go against advice? What's your biggest success and biggest regret when doing it?

Biggest success is getting a Melanarus wrasse for my mixed reef. The lfs wouldn't sell me any kind of Halichoeres wrasse, telling me it would kill my flasher wrasse's and all my snails. My Melanarus is a model citizen who spends his days grazing live rock for pods and other things I can't see, leaving any snail big enough to see alone.

Biggest regret: I love the look of my pink short spine urchin, but was warned about it "occasionally" moving frags around. No, it ALWAYS pulls frags, even glued ones from their perfect perch down to the dark abyss where I can't see them or reach them and they don't resurface until it picks up their bare skeletons months later to show off yet another expensive murder.

Same regret on urchins they pull everything up, kill snails and hermits.

I always thought a melenarus wrasse was reed safe. I had one for years and it cause no problem. Till it fell into the overflow and I took out the filter bag and squeezed the water out of it and crushed him. I felt terrible.

2) Clownfish live in pairs or harems only.

I have 9 in my drop off tank. They squabble at times but get along well

3) Damselfish are the devil.

Back where it all began

I have a cowfish, boxfish and Valentini puffer and all are model citizens. Never touch anything but the food inprovide. My Kole tang and one spot foxface eat any algae and my melanurus wrasse keeps the action going. I have a large CUC that never gets touched and my corals are good. My cowfish likes to hide in one of my leathers which keeps it a bit closed.

I skipped the chapter on rules. Have 14 fish, a yellow, purple and hippo tang. A gold stripe maroon and a tomato clown. A big ugly damsel, squirrel fish, a green coris wrasse and a bicolor blenny and a banghi cardinal. Oh almost forgot the Clown, Assasi, Sargassum and Blueline triggers. Add in a bunch of different corals and it's a big cluster but it works. 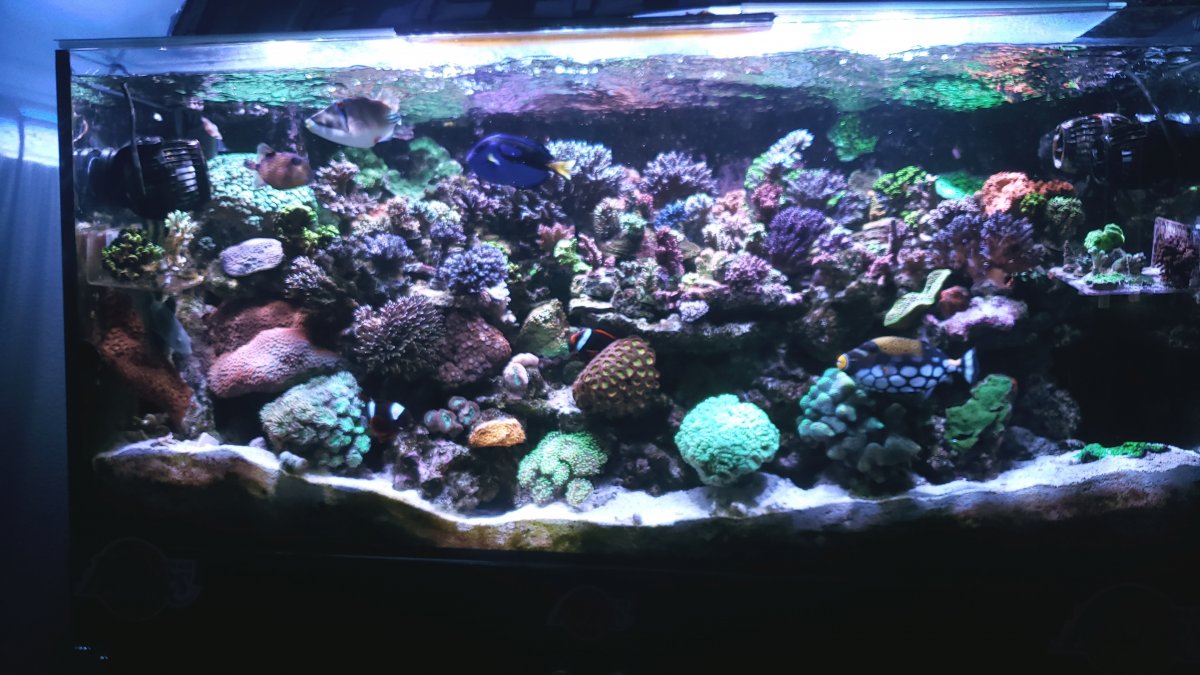 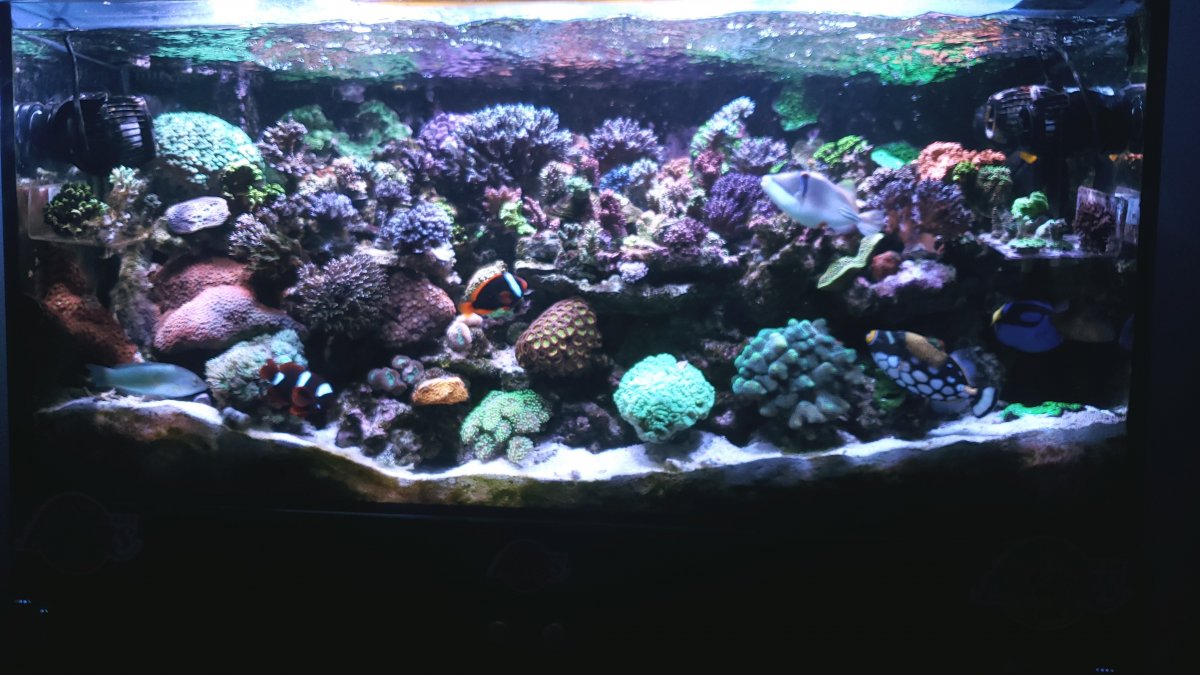 I broke a few rules but not on purpose.

I tried a clown harem but brook took care of putting that dream in the garbage bin just a few days after getting the clowns. Only 3 survived and they are hosted by a magnificent anemone. Once or twice per year the smaller clown gets kicked out for a day or 2.

I now have 11 Banggai cardinals in the tank (the 2 parents and 9 offspring of different ages that somehow survived in the tank.

The mag hosts most of these fish, sometimes there's 10 fish there (3 clowns and bunch of banggai).


It's impossible to catch them so I'm afraid of where this may be going.

There has always been that statement "Can not keep Angels in a Reef!" But many of us are breaking that rule. You just need to find the corals that angels are not tempted to eat. 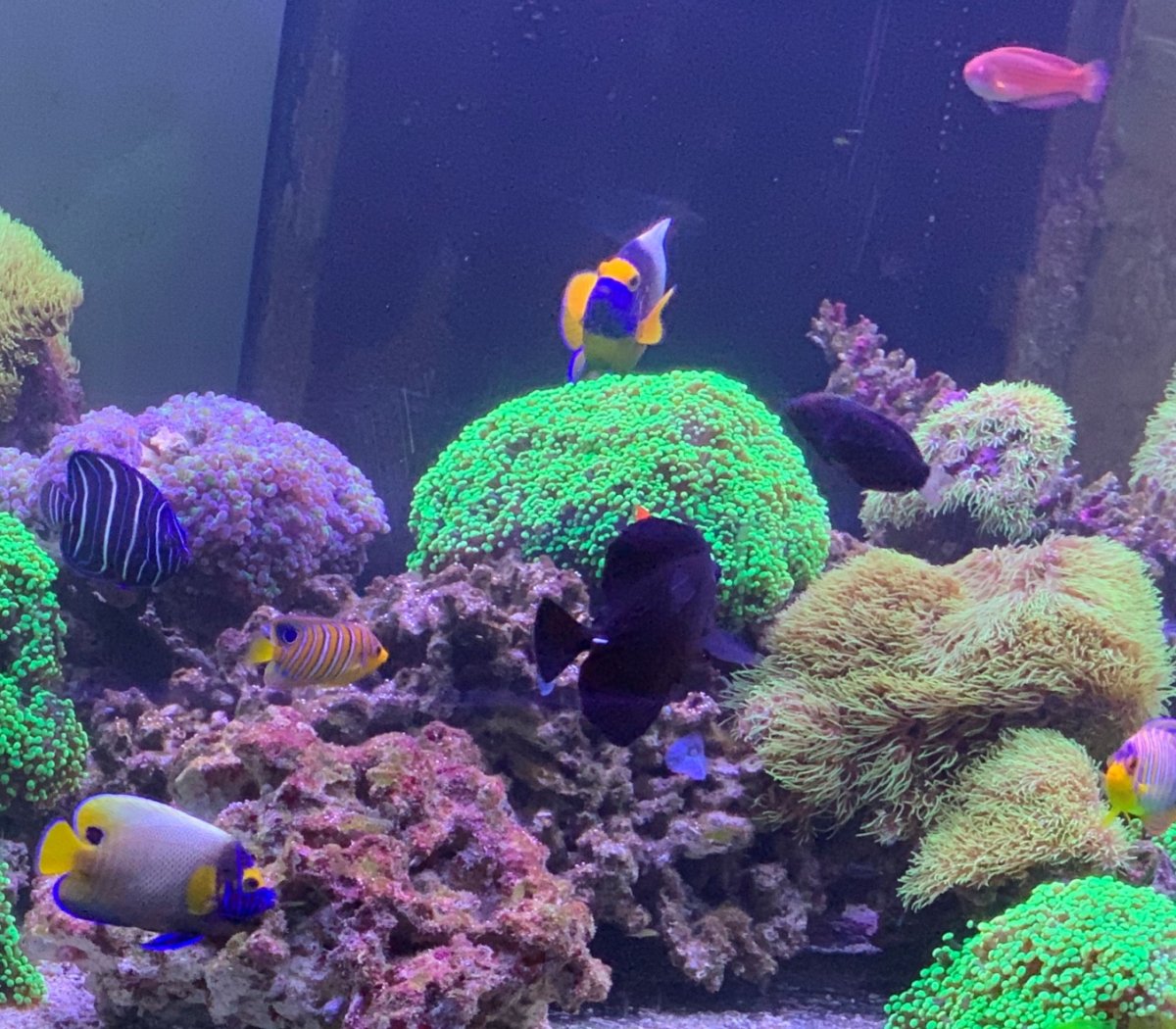 Not only angels but Butterflies also can be great with corals. there are more worth a try than just the pyramids, copper bands and long noses that are commonly put in reefs. 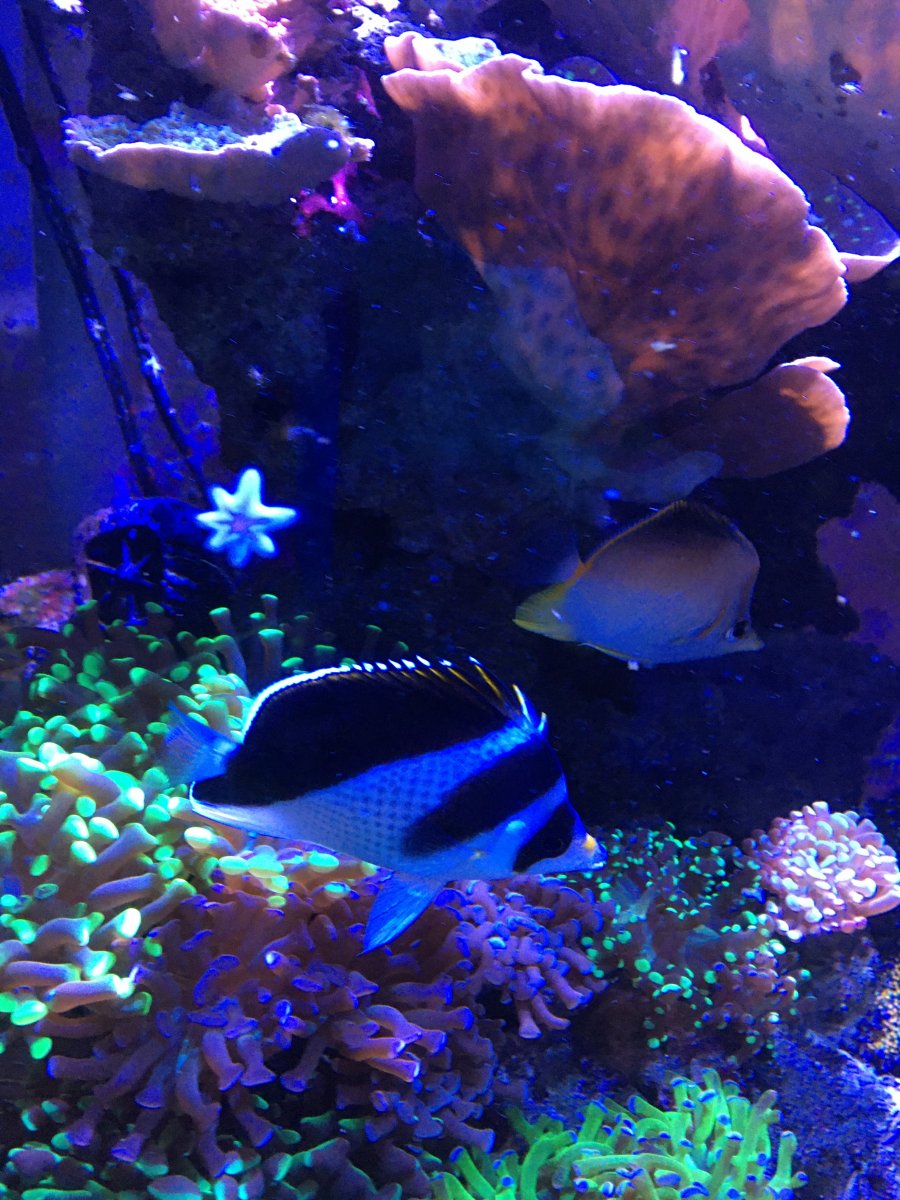