I started a nano tank in August, 2020. I took pictures, but never started a thread; so I figured I’d do that now!

My main goal for this aquarium is to have a relaxing place I enjoy sitting and watching the marine life. I grew up in Fort Lauderdale, Florida, and was always around the ocean. I knew I would be a marine biologist. Then, in 2012, my family moved to Atlanta, Georgia. 300 miles from the ocean. I felt very lost, and couldn’t satiate my desire to learn more about the ocean.

Throughout high school, I worked at a LFS and was able to start up a 13.5 nano. I moved a year later, and the tank died. I gave up, graduated high school, became a certified welder, became a barista, got married, and am now roasting coffee. I was able to convince my wife to let me set up an old Fluval Flex I had in a closet, and here we are

Set up live rock and water. There is a single chromis hiding somewhere!

At only 10 days in, it’s very premature to add corals. However, my friend was breaking down his tank, and offered me some frags, including a BTA. Had to accept! Worst case scenario, if my tank proved to not be ready, I’d bring it to the LFS for some credit! Corals included: 1 hammer, 1 cabbage leather, 1 Kenya tree 1 and BTA

Bought some macro from AlgaeBarn, as well as a zoa frag from the LFS and a batch of frags from online. Again, early for this many corals, but I couldn’t wait.. bad excuse, I know. The BTA was doing very well, to my surprise.

Brought the chromis back to the LFS and bought a Phantom Ocellaris and a Snowstorm! Hope they pair up and breed

The snowstorm didn’t take shipping so well.. woke up to her like this—

Shes swimming around. I’ve fed her peas and she only eats mysis in garlic. The male is eating like crazy though!

Woke up to a Dino outbreak in addition to ich on the fish. Set up a quarantine tank (which I admittedly should’ve done to begin with) and am going to begin the long 76 day wait for the DT to be fallow. I also moved all the corals to a breeder so they can be near the surface, and I can reduce lights.

Tropical storm Zeta knocked out power. By the time I got home from work, my tanks had gone 14 hours without power. I put every piece of coral in a container, took all but an inch of water out of the QT, and drove the tank, fish and coral to our family’s coffee shop (which still had power) and set everything up. I was just hoping I could get the coral and fish separated before an ich trophont could complete its cycle. I’m very grateful I did this, because we were without power for 72 hours.
Had some casualties, but the majority of corals survived.

Got a Rough Rider Blasto and a coral banded shrimp! Fish are still doing well in the QT and the DT is recouping from the storm.

Woke up to a very cloudy tank and my macro bleached— still not sure what caused this. I did do a water change the night before, but nothing jumped drastically. Parameters checked out. So I added some beneficial bacteria and waited. It cleared up within 24 hours

Some bam bam zoas have zoa pox. Not much info is available about this disease, so I removed the frag, fearing it would spread. Earlier this day I had ordered a Grand Master Krakatoa frag.. was really concerned it would infect it. Despite my efforts, I was unable to save the frag.

Day 104: 12/01/20
The GMK’s arrived! I was really nervous, because the day it shipped we had snow and I was told there would be a delay— thankfully it came the same day!

GMK has a second polyp opening up!!

Added the fish to the display tank and they’re so happy! Also bought a second BTA

Bought some really cool Ding Dangs from the LFS! Love the colors on these

My GMK’s are really happy and have a 3rd polyp. I am dealing with some dino’s still, so I’m considering a 3 day black out. My anemones are happy early in the day, but toward the end close up and look really sad (2-3pm) so I’m thinking the dinos are irritating them. 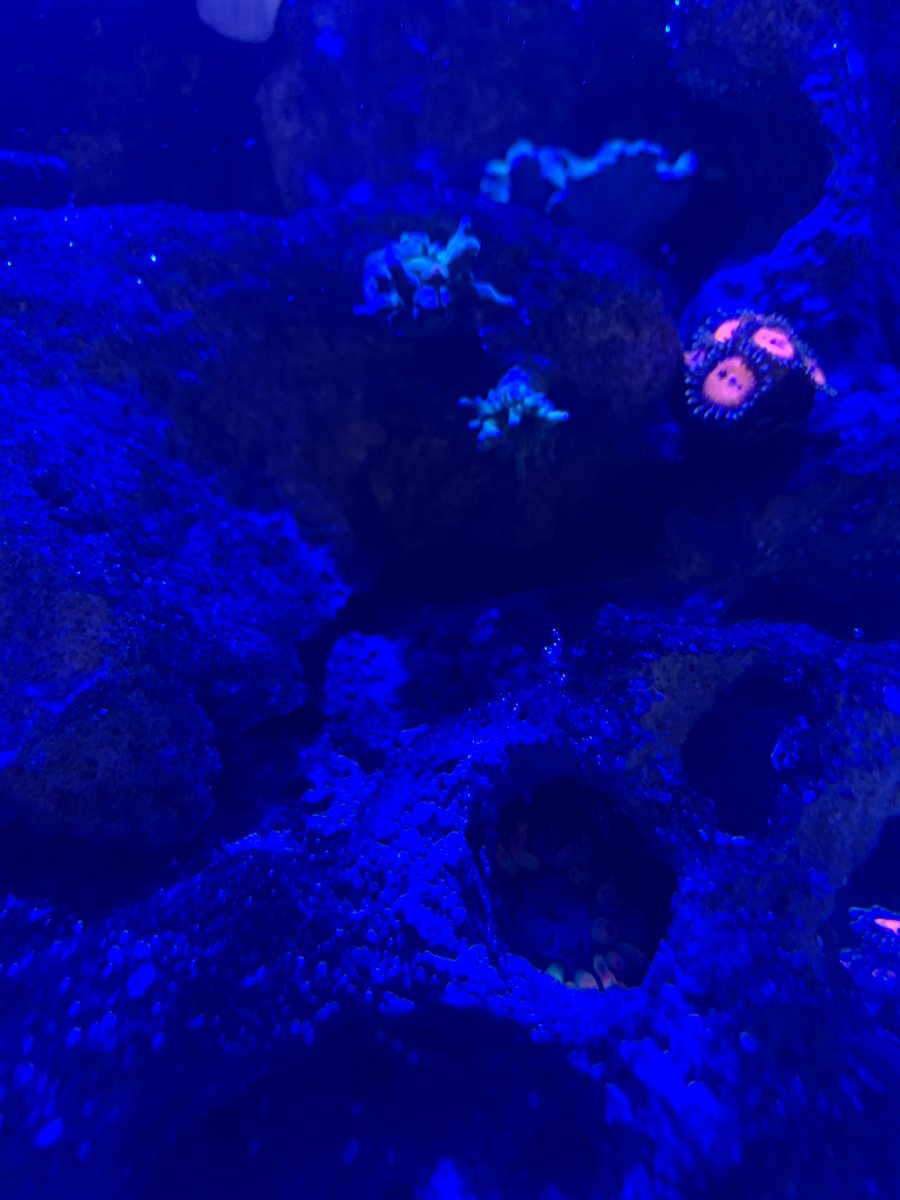 Looking great! Unfortunate that the clown passed. Glad to see that almost everything survived the storm.
OP

McCarrick said:
Looking great! Unfortunate that the clown passed. Glad to see that almost everything survived the storm.
Click to expand...

She actually pulled through! I should’ve given more of a definitive answer to her condition— she was only eating mysis in garlic, then slowly healed and started eating pellets. There’s a photo of her, about a week ago!

I’m glad you decided to get in the hobby again. I truly believe that it never leaves you once you’re into it! Go to account settings and scroll to the bottom to add your build thread link and get your badge!

RedFrog211 said:
She actually pulled through! I should’ve given more of a definitive answer to her condition— she was only eating mysis in garlic, then slowly healed and started eating pellets. There’s a photo of her, about a week ago!
Click to expand...

Oh that's awesome! I thought that she was hanging on but wasnt sure since I could only find one clown in one of your pictures. That's always awesome when your fish recover.

Excellent tank build! It seems like you hit some rough patches, but managed to persevere! I just love how colorful your tank is! Keep up the good work!

By the way, what camera lens are you using to get such clear photographs?
OP

Sharkbait19 said:
Excellent tank build! It seems like you hit some rough patches, but managed to persevere! I just love how colorful your tank is! Keep up the good work!

By the way, what camera lens are you using to get such clear photographs?
Click to expand...

Thank you! I’ll link the lens kit I bought. I will say, the kit comes with 11 lenses, but I only find the macro and yellow useful. Even then, the macro lens is only useful for corals *very* close to the glass. Anything past 2” is barely visible- you might be able to find a macro with a better focal point. With that being said, when you get it just right, the results can be astounding!

It’s also impressive how you recovered the clown! I can’t tell you how many fish that came in the mail like that, and unfortunately passed.
OP

It’s also impressive how you recovered the clown! I can’t tell you how many fish that came in the mail like that, and unfortunately passed.
Click to expand...

I really wasn’t expecting her to pull through! I’m so grateful she did