I should add, that had i known, i would've done differently, therefore I am sharing how to screw up a new-to-you tank. reef2reef has solved my problems as i found out i had problems. I didn't know the questions to ask and i assumed i knew after 8 years what to do. only to find i was actually killing most things by phosphate levels, nitrate levels, feeding method and so on. Here i start the entries from -77 to +77 days of adding the fish.

in the 77 days it took to set up the tank, i found the original pumps were seized (always check pumps), there was a crack in the acrlic (you can buy weld on 4 to fix), the base was dead and needed serious fixing, the flexible hoses were dried, and so on...

I i moved lots of live rock , copepod clusters and starfish 24 days before the big move, only to find i had bad circulation and there was a deadly halocline with salinity off the scales at bottom of the tank. look at one of the original empty pictures to see a halocline. 20200901

from moving the rocks in old tank, i found that i must have disturbed the bacteria balance as my prized butterfly fish got ill and died fast.

day 0 of move, tried to bring some old water to bring bacteria again (an effort that didn't work as i indirectly found out through phosphate graphs on adding commercial bacteria).

day 21 another fish died like the butterfly. I never had fish get ill before.

day 28 more fish added, but worried something is wrong.. more reef2reef reading made me buy a phosphate kit to solve why the white in my tank was now brown everywhere.

day 29 added store bacteria and phosphates were around 1.5ppm! switched to frozen food that i directed to the thungry ones only to forget to feed hermit crab in the plan.

day 36 the other clowns attacked the smallest clown such that he died.

day 61 found hermit crab ate the arrow crab and was also chewing apart my mushrooms. he was moved to the sump after being convicted.

day 77 (today), phosphates are still trending downward using a bioreactor, and a small amount of GFO. today we are at 0.307ppm! i beleive it was that for years i improperly fed flakes in a rather bad way such that the sand and rocks absorbed everything. my graph is non-linear with a taper that lasted almost a month. i am now seeing a sudden drop, so maybe the rocks are near done.

i think i have spent nearly an extra thousand if not more just redoing old systems that i tried to fix up. Looking back i always had these problems but never looked for a solution until i wanted a larger tank to solve the thought that maybe my tank was too small for the fish. i hope one day to get the systems to the point i can be like some people here and extended or delay my water changes by having the right balance of systems, but i am not knowledgeable enough yet (besides the phosphates are still 10x too high). 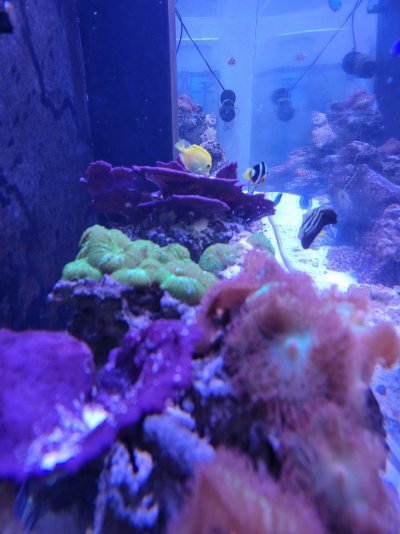 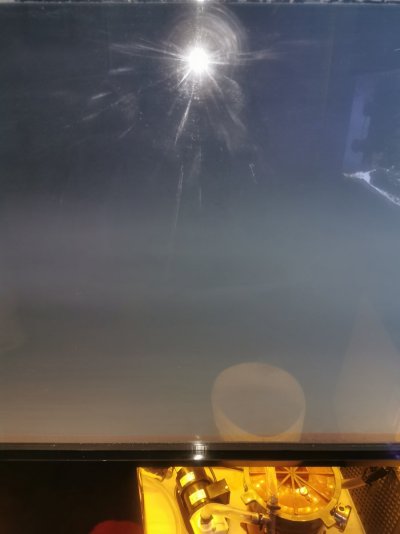 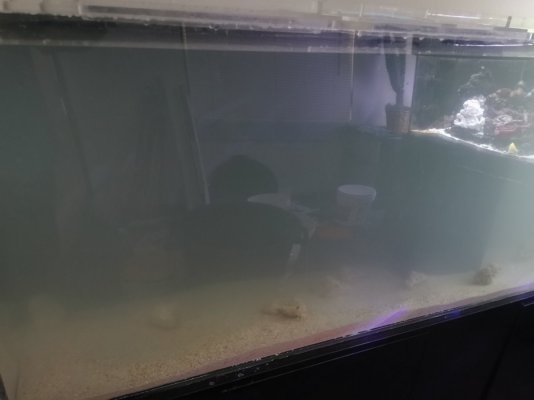 I thought I would add a graph of my phosphates with what I have learned.

Red drop in phosphates was due to using store bought bacteria. This shows that 2 weeks was not enough to set up a colony that could handle the phosphate sponges from the old tank.

Yellow drop was due to the bioreactor having a back pressure problem that was solved with a simple check valve. The check valve forced bioreactor flow to go into the protein skimmer.

Green drop was after 3 weeks of no water changes (a small test), followed by a 30 gallon water change.

I honestly think my phosphates are the last thing I need solved. But I think I see a problem on my oldest clowns tail fin today. It could be my imagination or is it tail rot starting? I'll watch him the next few days.

Anyways it is just an update.. 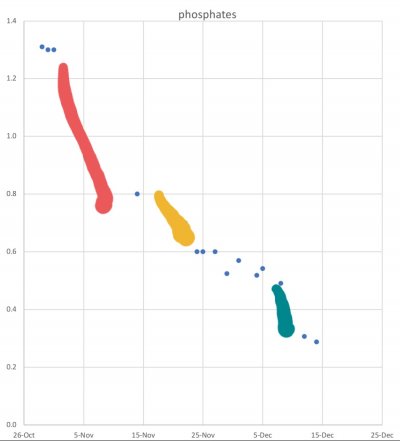 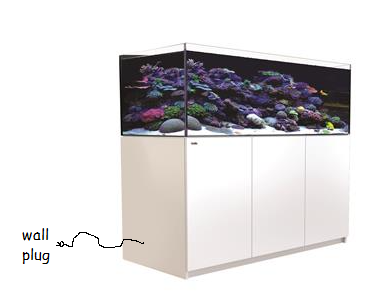 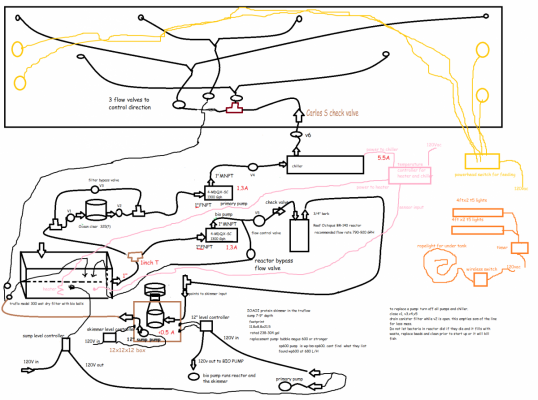 vs what is reality.
OP

On December 24th, destruction and chaos! received a text at 6:46am from my son at work that showed my electrical system for my tank melting from electrical fire! too bad i didn't document more pictures but i was so busy with cleaning up the water in my office and trying to restart the system.

first was to get powerheads going to supply oxygen by blowing bubbles downward.
water cleanup with a wet/dry vac was next.
after that was the wiring rerouting, reseting circuit breakers, basically lots of stuff.

Along the way I had to clean up the heavy dark soot and ash from the melted electronics not to mention how the whole office smelled horrible. luckily the top of the tank is mostly closed so little soot landed in the tank.

Next was the concern that the bacteria in the bioreactor will die. I have no idea how long that takes. so next I moved the skimmer to the original sump that has a lower level than what the skimmer is designed for use. This also required closing bypass valves that i had installed, removing a pump, installing a bypass hose and adjusting the skimmer as best as possible to new conditions.

I am lucky i spent so much time trying to learn the skimmer during tuning because it made the setup possible within 30 minutes or so.

Next was realizing i had not yet turned back on the tank heater, so it was very low at 73F. I had to fix that next.

tank stabilized, time to feed fish while i clean soot and add air drying fans around the wet carpet.

but since it is Christmas evening, and my wife wants me home. Therefore, the tank is considered safe for now and ill be back on the 26th.

26th... the phosphates are a little high, but to be expected since the skimmer overflowed its cup. the temperature is fine. hermit crab (convicted murderer, see my earlier posts) is fine as well in the sump. I also normally have a decent amount of surface scuzz on tank due to the way the powerheads are aimed, but today was a lot more. i removed it as normal. next question is about how my feeding habits are for the tank.

So, i guess the Christmas miracle is that no one was hurt from the fire, the fish lived and that this happened while someone was there! Since the fire was manually put out, that means the fire was uncontrolled. I am so happy this was not as bad as it could have been. 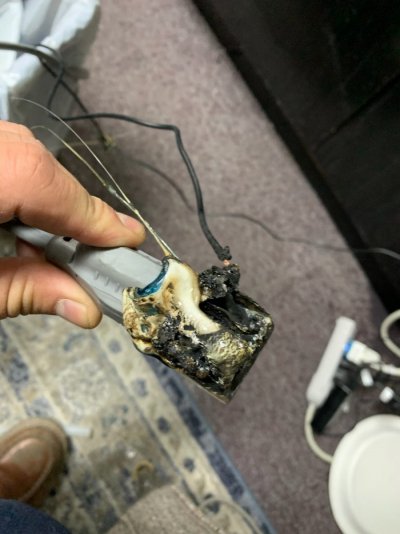 It has been over a month since the great aquarium fire and i think the tank is almost stable to begin over again on testing.

when the protein skimmer was moved, it took a long time to retune it with many failures and terrible overflows of the skimmer when almost full. thinking back that might be how my yellow tang got ill (still alive but still red blotches).

the problem was the varying levels in the true sump due to evaporation while operating the skimmer in a level BELOW what it's design depth. i kept chasing the adjustments, and when i added top-off water, about an hour later the cup overflowed dumping shmutz into the tank. all my fault.

the solution was an auto top off controller that controlled its own pump to sense if the system was empty, alarms, etc. Found one on amazon made by flo-zone. the first one i received was inop but due to their great customer service, i received a replacement. the problem was that i was slow to adopt/ find an auto-top off and then slow to install it and then the 1 week delay on for new one meant i lost nearly a month. again, all my fault.

i have not done a water change either and i was travelling last week, so my employees got to overfeed the tank. needless to say I am not looking forward to doing the tests again. on the plus side i added two tiny wave fans to reduce dead spots.

i also notice all the green hair algea is gone, which the tangs loved and now i have a great harvest of cyano .

A
A Lesson Learned