Hey folks... I'm coming up on the one year mark for my 50 Gallon SCA reef tank so I thought I should start a build thread and share it with you all. I can definitely say that I only made it this far thanks to the help I received from Reef2Reef. 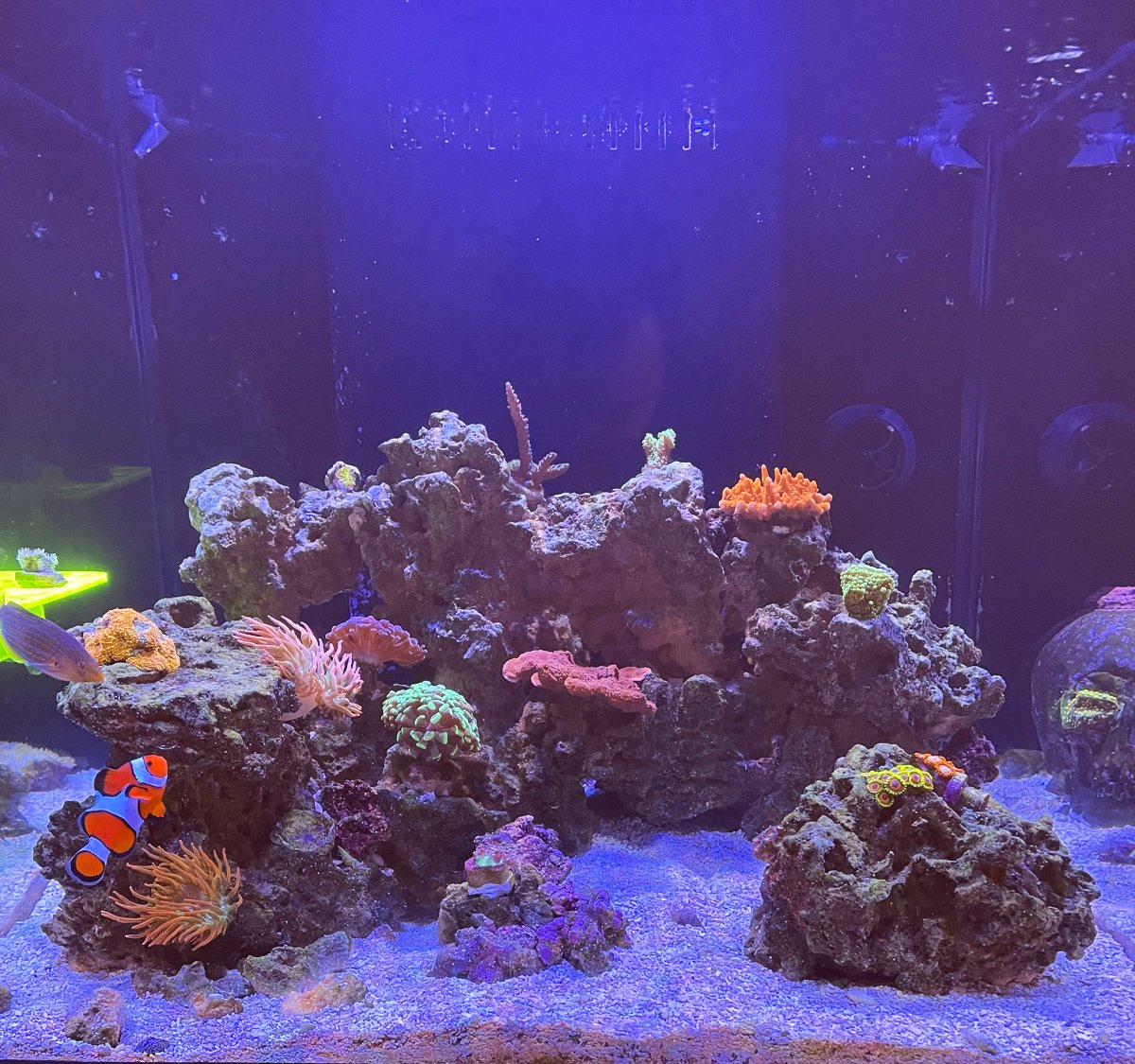 I filled this tank up on May 13th 2020 after ordering the 50 gallon cube PNP system EcoTech Marine edition from SC Aquariums. 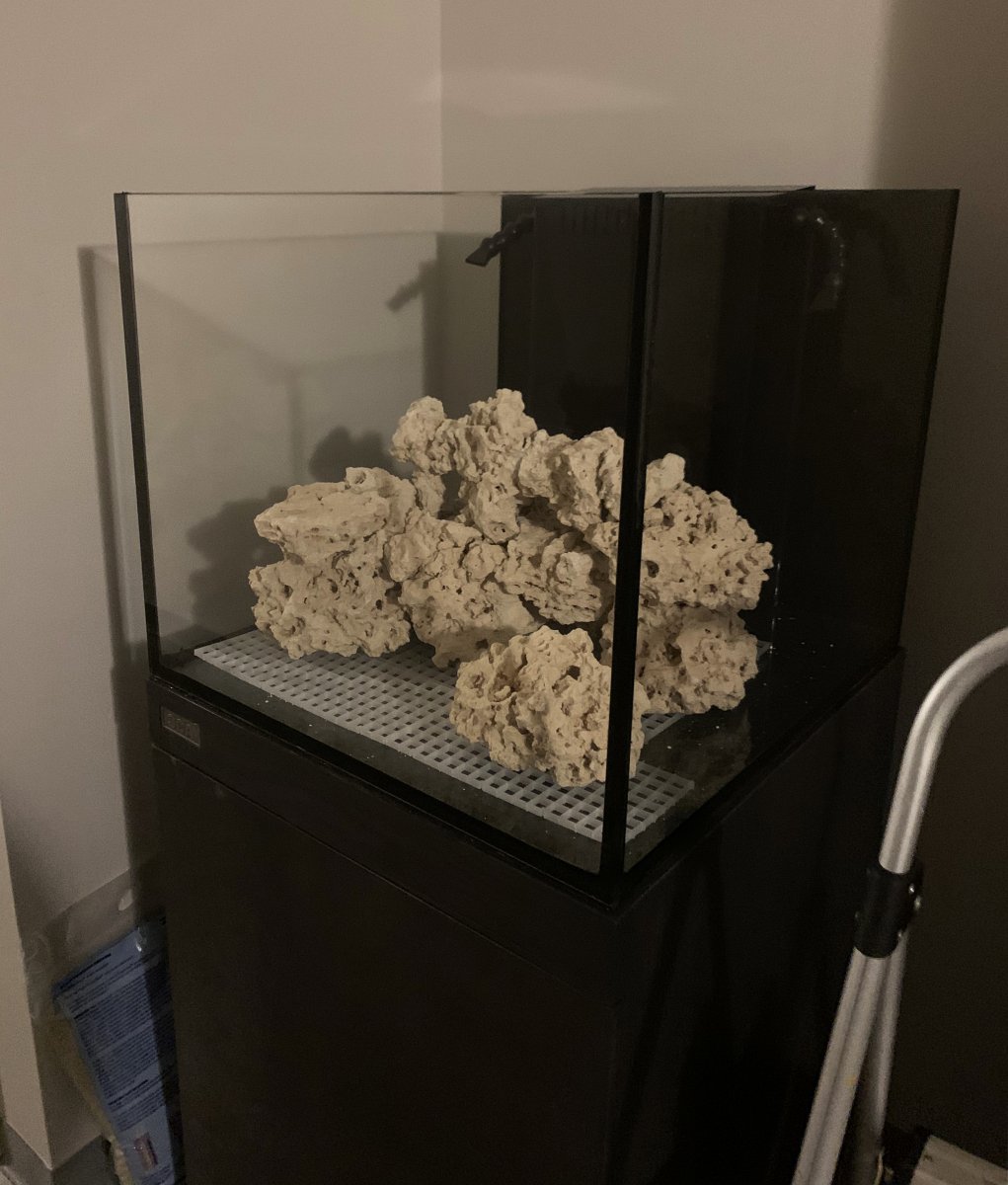 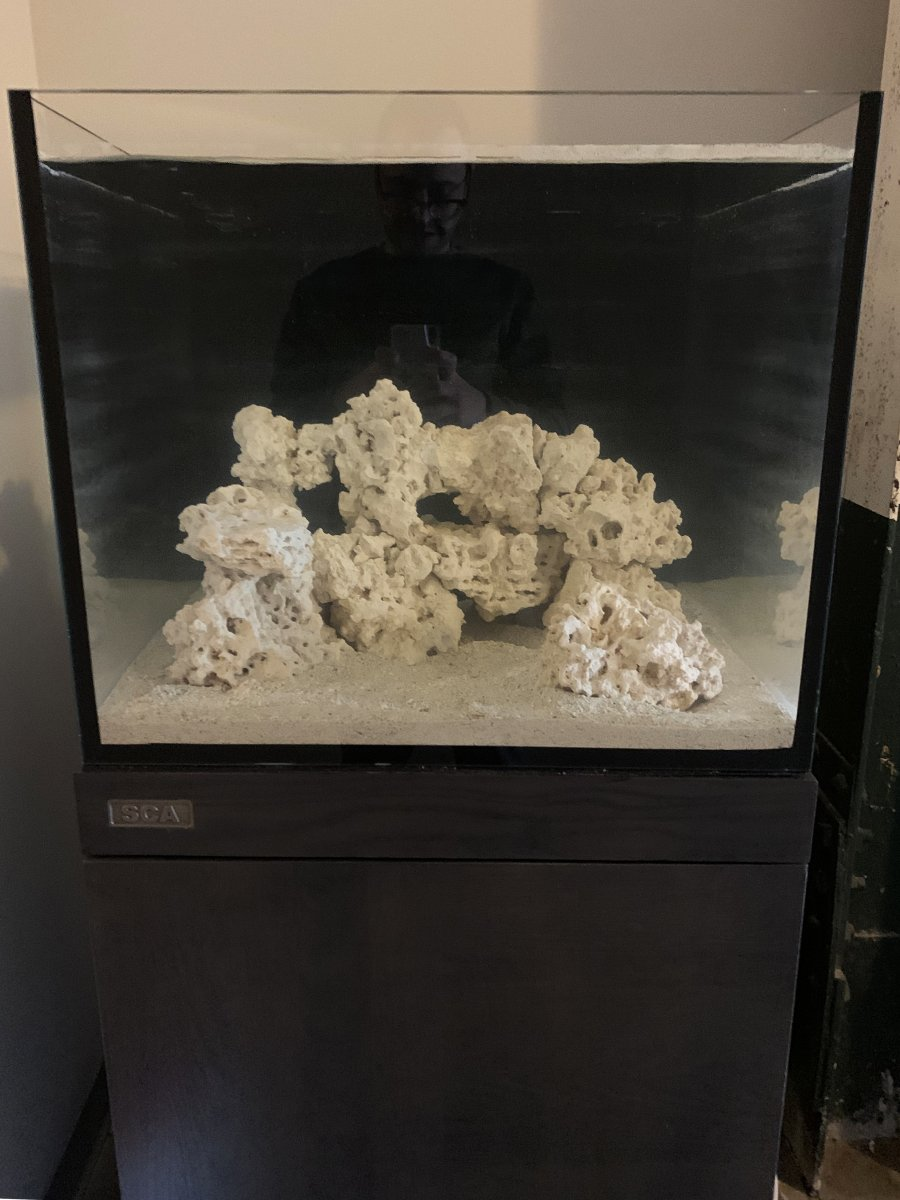 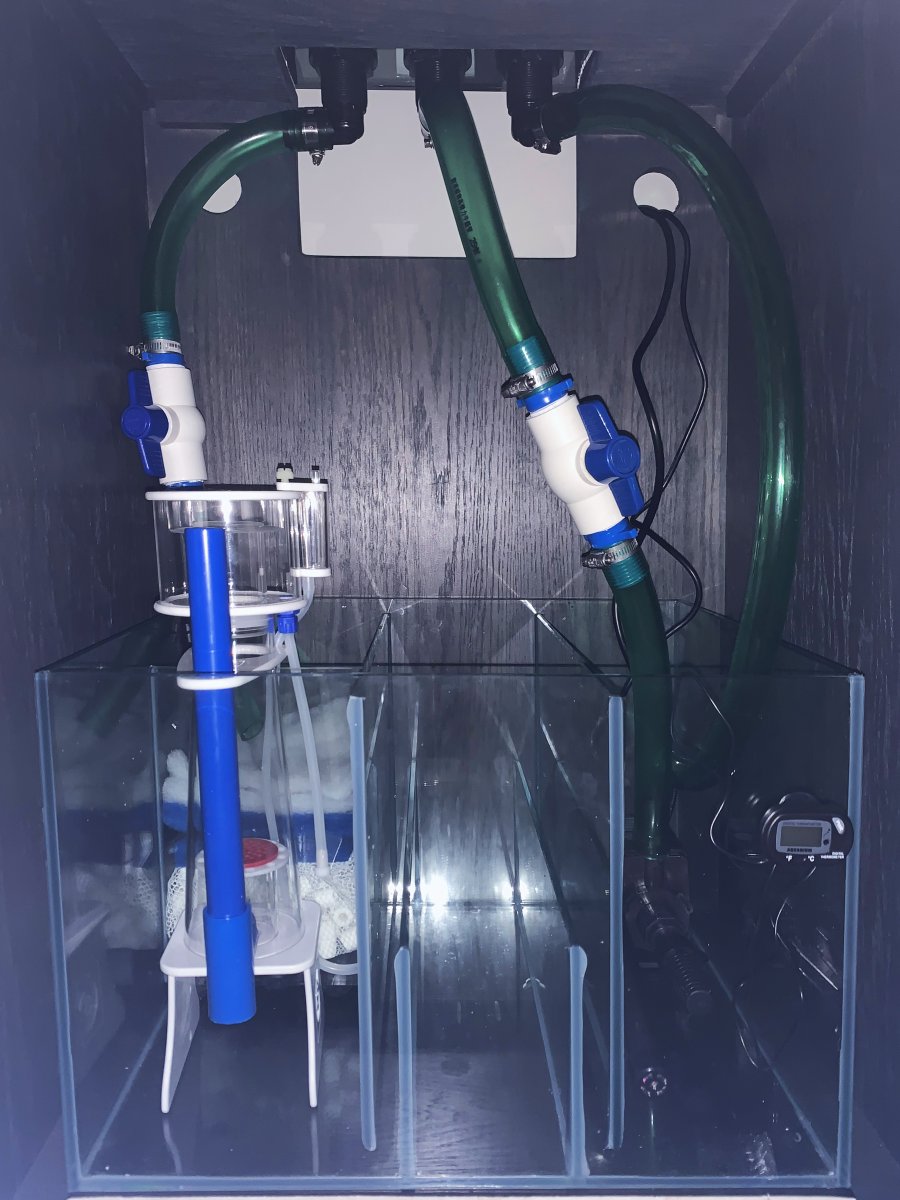 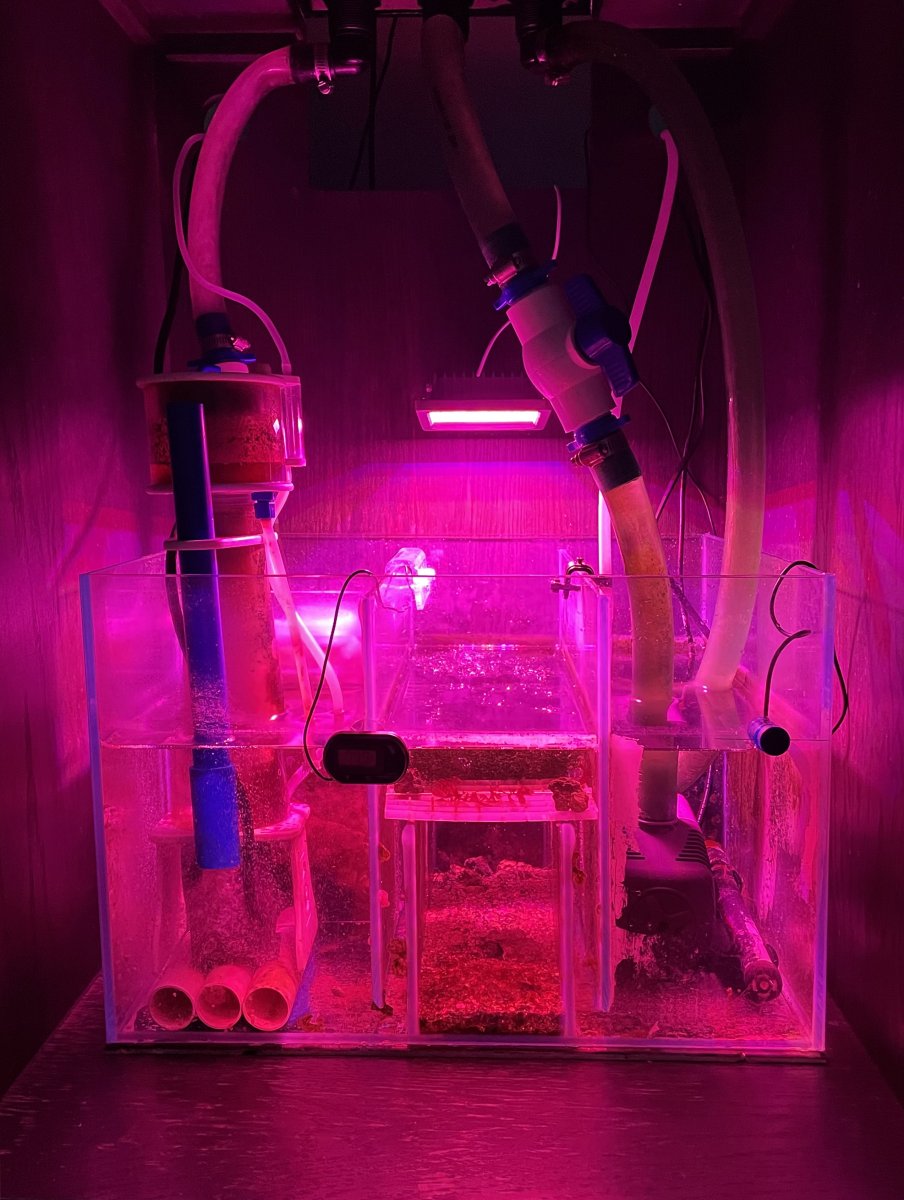 As of right now I plan to add
Thanks for checking it out. I'm looking forward to upgrading, filling her up with more coral and showing it off here for you guys. 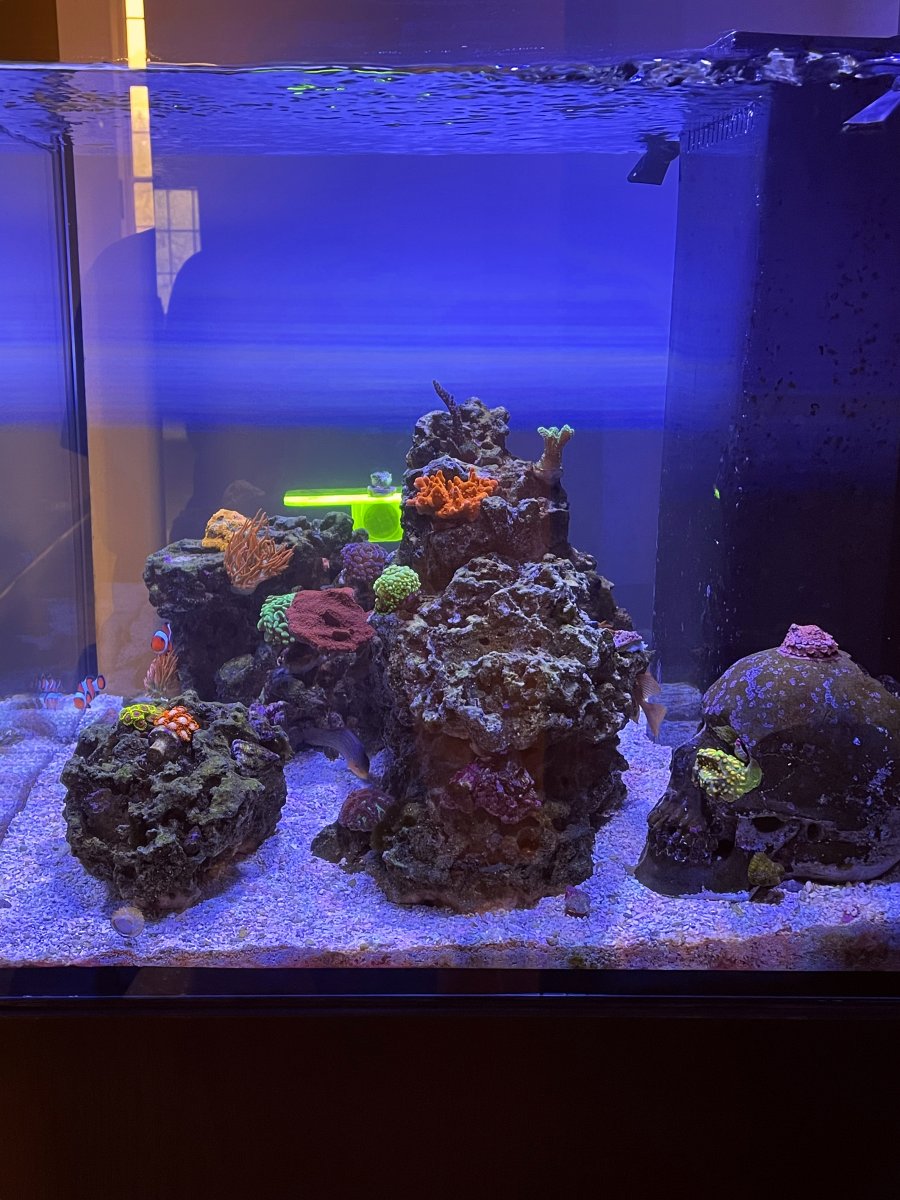 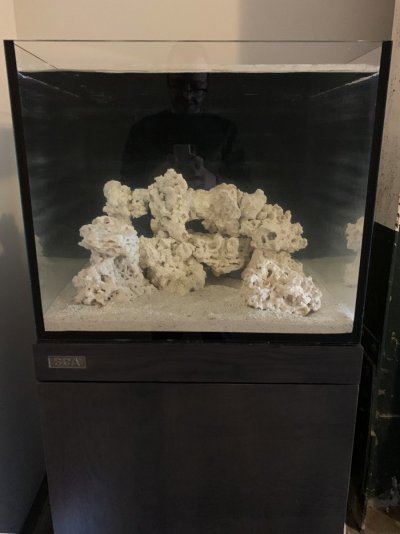 Rating - 0%
0   0   0
Congratulations on your Build Thread! As for the e-Marco Cement, don’t give up too soon. Mix it right and will firm up rather quickly and if I recall correctly, can just finish hardening in the tank. So if you can pull some of your loose coral plugs, great, but anything encrusted or growing onto the rocks already, work fast and use a spray bottle on your corals to keep them moist. I bet you can have the stacked/cemented rocks back in the water within about an hour or so. Best wishes.

Great rockscape! I really like the pvc in the sump. I think plumbing my sump might just have to be one of my next projects. I’m still running the skimmer it came with. It’s a work horse.
T

Right now I’m just using a two gallon bucket outside of the cabinet for my top off water and running it into the return chamber of the sump. It’s a little ugly but it’s tucked away between the tank and the wall.

I have been looking for a better solution and I found this slim ATO reservoir by advanced acrylics that would fit just right in the cabinet next to the sump. It’ll Probably be a Christmas list item for me this year.


The ATO I’m using is XP Aqua Duetto. You can see the round sensor and the hose in the second pic. 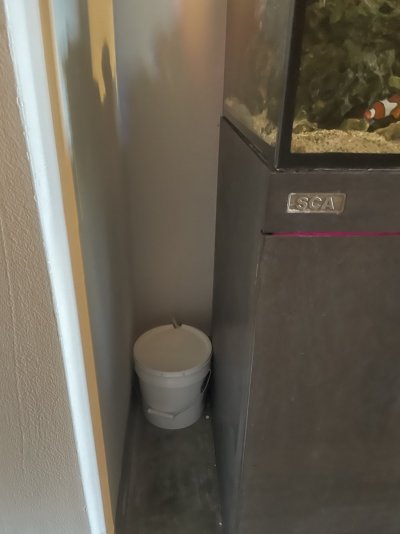 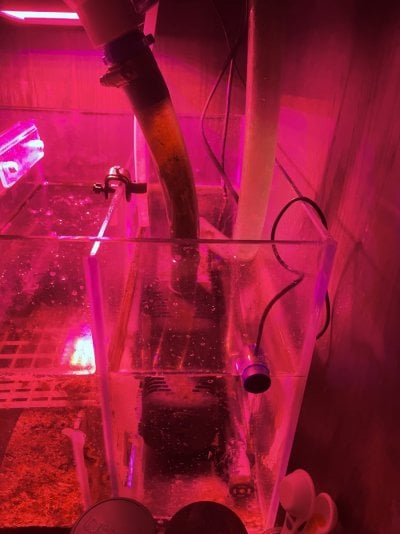 Rating - 0%
0   0   0
Thank you @The_Skrimp will have to do some measuring but really like those slim ATO reservoirs.

Rating - 0%
0   0   0
@90s_shano
What doser are you running? I’ve been thinking of picking one up to make dosing easier but with the limited space in the SCA 50’s cabinet I probably need something that I can mount to the wall somehow.

Rating - 0%
0   0   0
I figure it’s about time to update my build thread. No new gear to update right now but I have made some changes to how I manage the system.

First of all - I have to apologize for being one of the noobs who came here to make a few annoying “help algae!” posts. It got so bad I seriously considered throwing in the towel and starting over with live rock instead of the dry rock I have. But the advice I got from the R2R community started to turn things around and I saw huge improvements even after just one week. I came here because I knew you guys would help and I stick around because I really appreciate the knowledge and sense of community here. You all are always super awesome. Hopefully I can help the next guy in my predicament.

my issue was a combination of dead rock and high phosphates. They were sitting at .1ppm. Slowly my tank started to be taken over by hair algae. Assuming this was just a regular part of the ugly stage, I let it happen. The next thing I knew, every inch of rock was covered. My next step was to try Vibrant. No hate toward that company -their product really works - but the amount of algae it had to kill off in my tank led to other problems. I lost all of my Mexican turbo snails and the dead algae led to an awful brown crud covering everything. It didn’t look like dinos because it wasn’t snotty or bubbly but it came and went with the light. Not long after, the hair algae came right back. I was left with a tank that was once again covered in hair algae only now there was a ton of rusty brown crud growing in it. Every day when the lights came on, the brown crud would spread and cover my substrate. Hands down the ugliest reef tank I’ve ever seen. 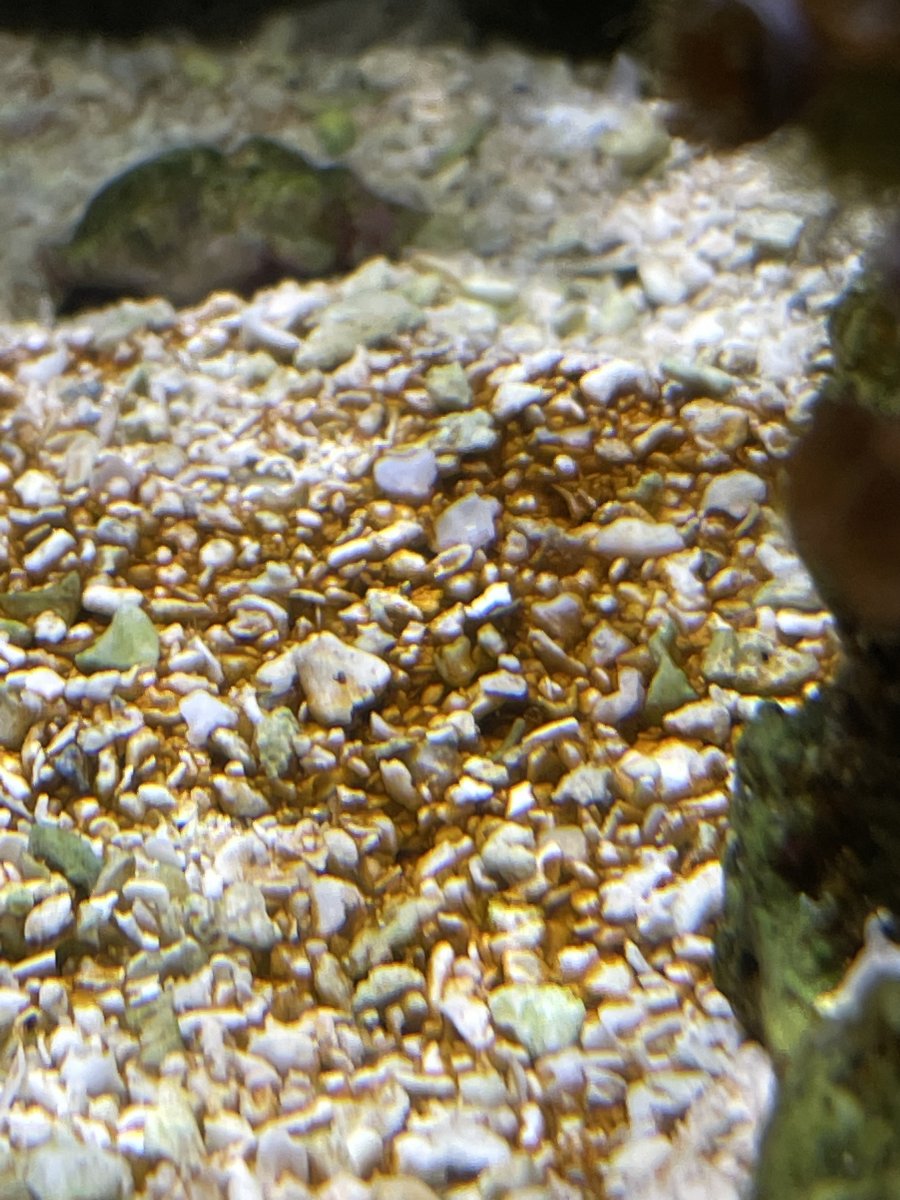 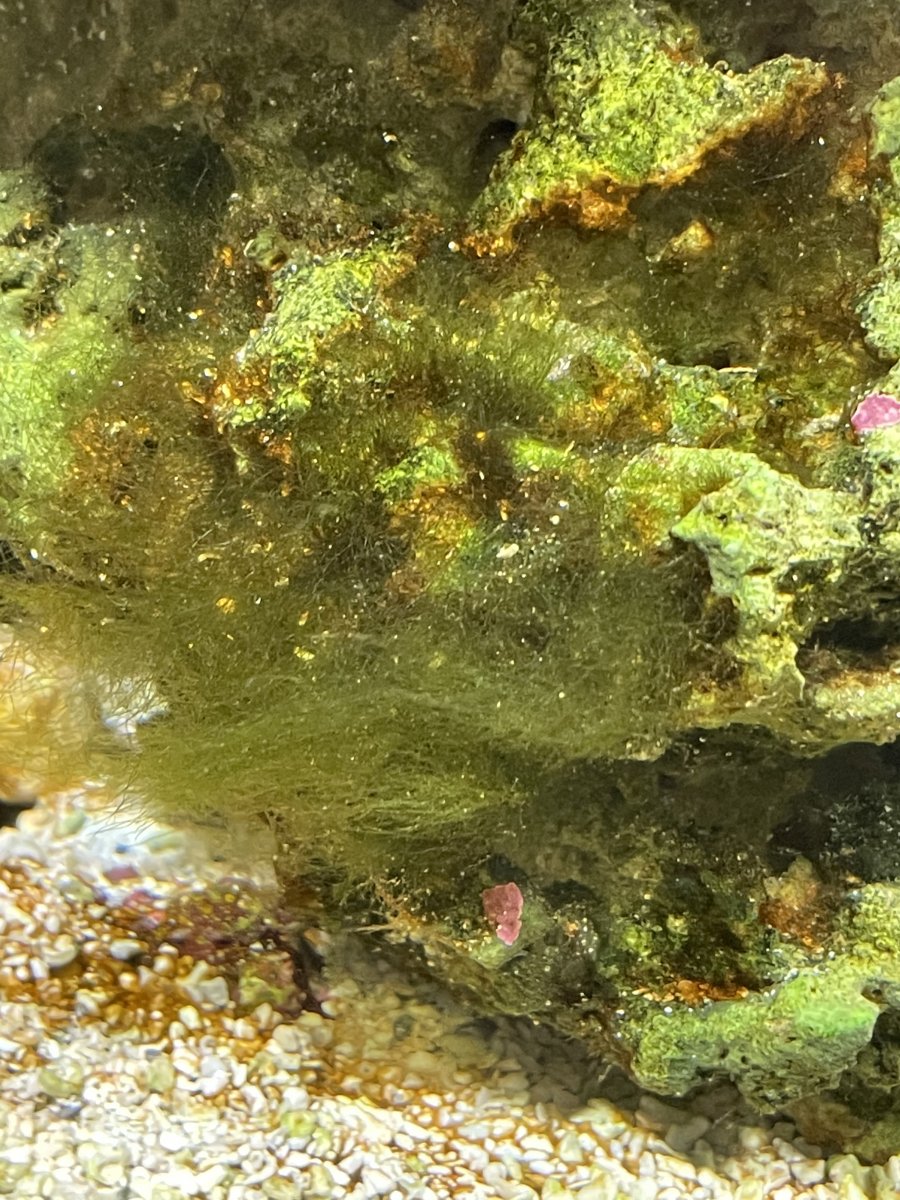 I did a few things that were suggested to me by the folks here at R2R.

I reduced feeding and stopped feeding coral and dry foods. I only feed frozen for now.

I started dosing 1ml per 10 gal of hydrogen peroxide at night when lights went out and again in the am before lights came back on. This seemed to have the most immediate affect in the brown sludge. I saw significant reduction of the brow stuff on my substratum once I started dosing h2o2.

I started carbon dosing with vodka. I used the carbon dosing to bring my nitrates down to near zero at which point I started dosing neonitro to keep nitrates up while I waited for my phosphates to drop. I’m now dosing .25

I increased the use of phosguard. (Changing it out every four or five days)

I increased the light on my refugium to run for 16 hours.

finally. I bought stock in microbacter products. Okay… Not really, but I should…. I’ve become a huge fan. I have been dosing the “dirty tank” dose of both microbacter 7 and microbacter clean to the tank.

and aside from that, it was a lot of manual removal, scrubbing rocks, and vacuuming the substrate.
I still have quite a bit of hair algae to go but it has gotten so much better in just the short time I’ve been doing this. Slowly I’m seeing less and less algae every week. I still see it because I’m a perfectionist but it’s barely even there in this picture. Just a whole lot of clean rock and white sand. 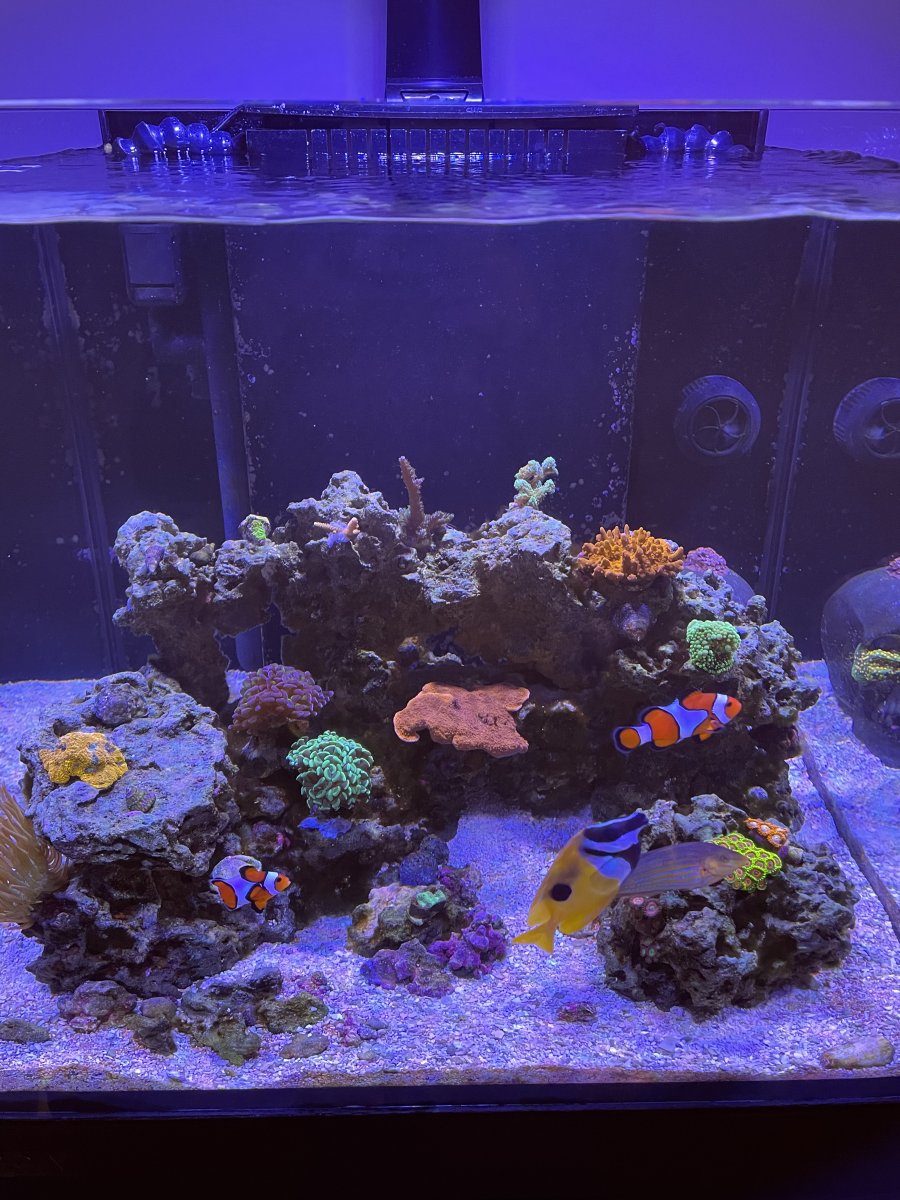 Probably a coincidence or maybe things are just happy in my tank but this started happening too: 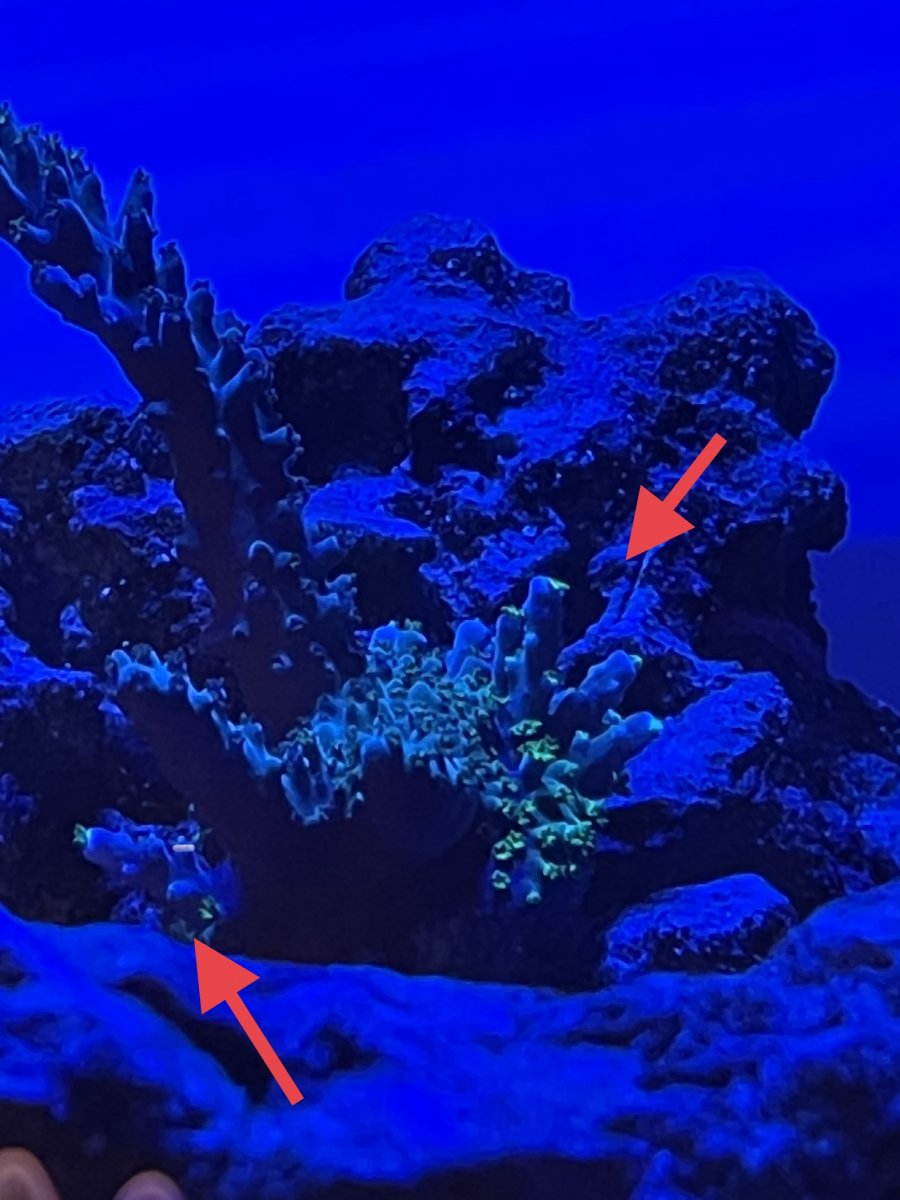 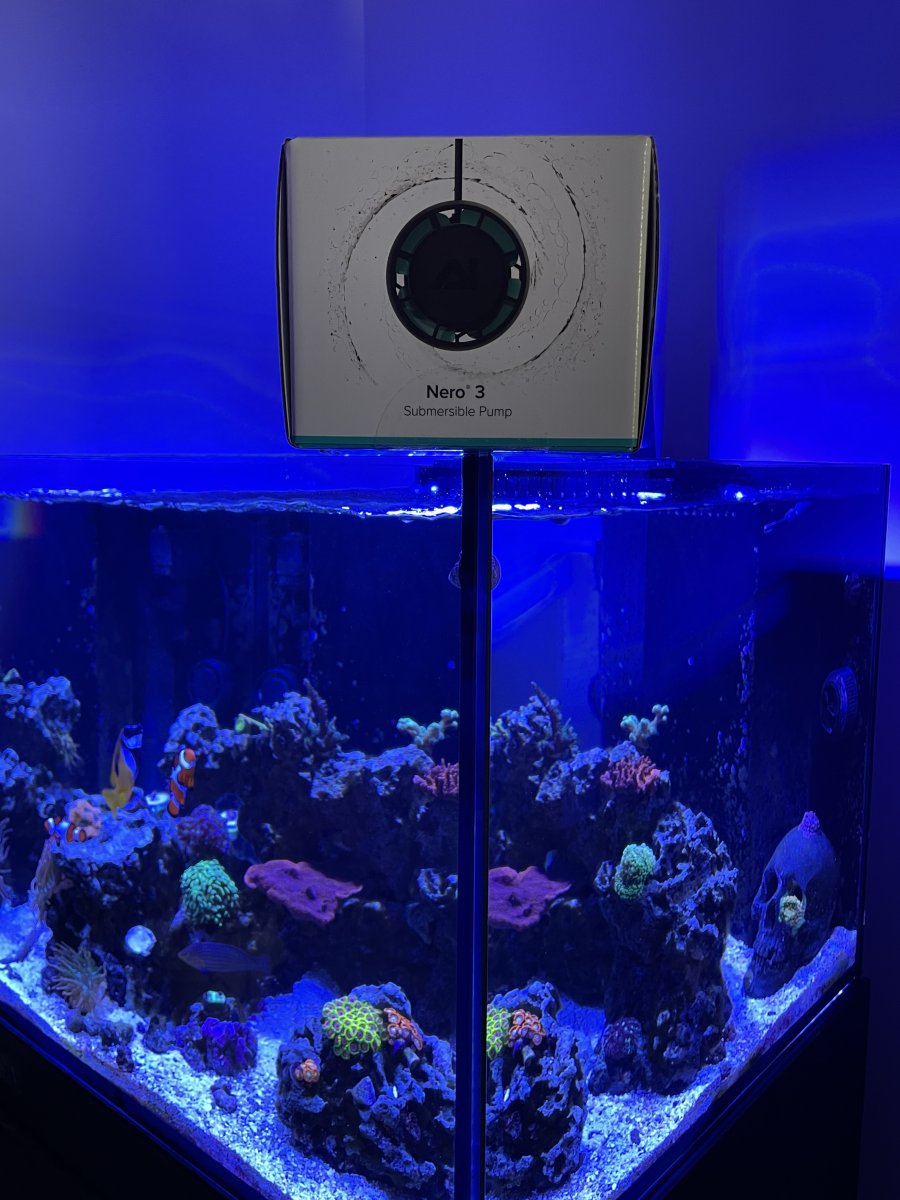 I’m loving this pump so far. I’m actually pretty shocked that it pushes considerably more water than my mp10. It packs a serious punch for such a small pump. The set up is pretty intuitive especially if you’re used to the mobious app. The AI app is virtually the same thing. While my mp10 does have a few more options for flow patterns such as reef crest, lagoon mode, and etc, this pump only has three: constant, pulse, or random but you do have some level of control over those settings as well. I tried to match them as close as I could to my mp10 schedule (and I’m also half hoping that eventually AI and eco tech will share an app that lets me slave one of these to the other). It does make a slight hum when it’s turned up pretty high but not noisy enough to bother me. If there is one negative I’d say it’s the fish guard. It restricts how much your able to angle and direct the pump but better safe than sorry.
Anyhow… I'm really excited to see the difference that having two powerhead on opposite sides my tank is going to make on the overall health of the system.
Cheers
Jose
OP

Rating - 0%
0   0   0
I just updated my lights for Black Friday. I added a Reefbrite XHO K15 kit to my Radions. The extra pop of color looks awesome and they do a great job at filling in shadows. They’re not all the way up yet because I’m still acclimating my corals to the new light but I’m definitely already impressed. We’ll see how my corals do with the added light. 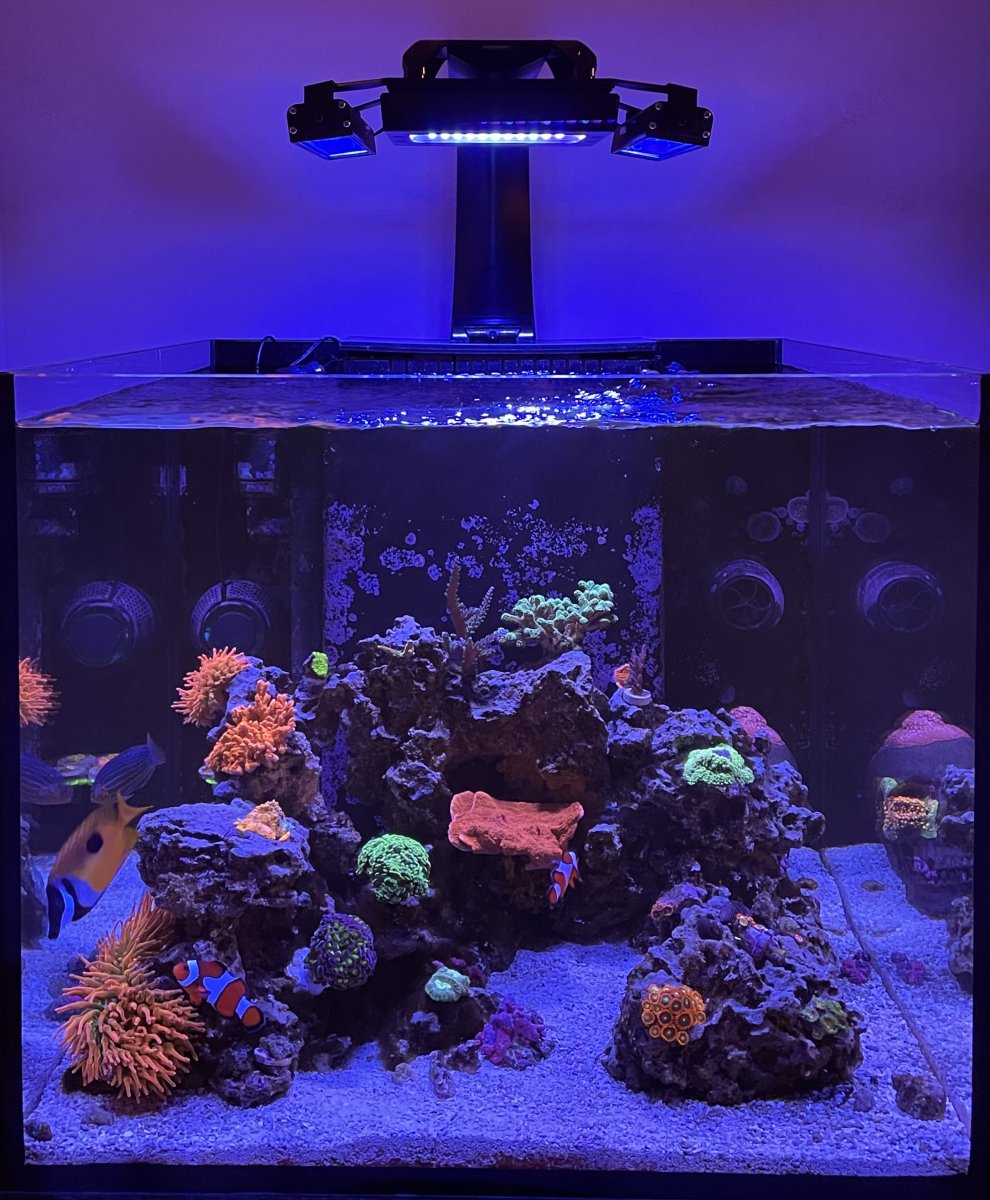 Extra bonus - I ordered it from Bulk Reef Supply over the Black Friday weekend and they sent an extra 100 dollar gift card for algae barn products. Thanks for the pods! 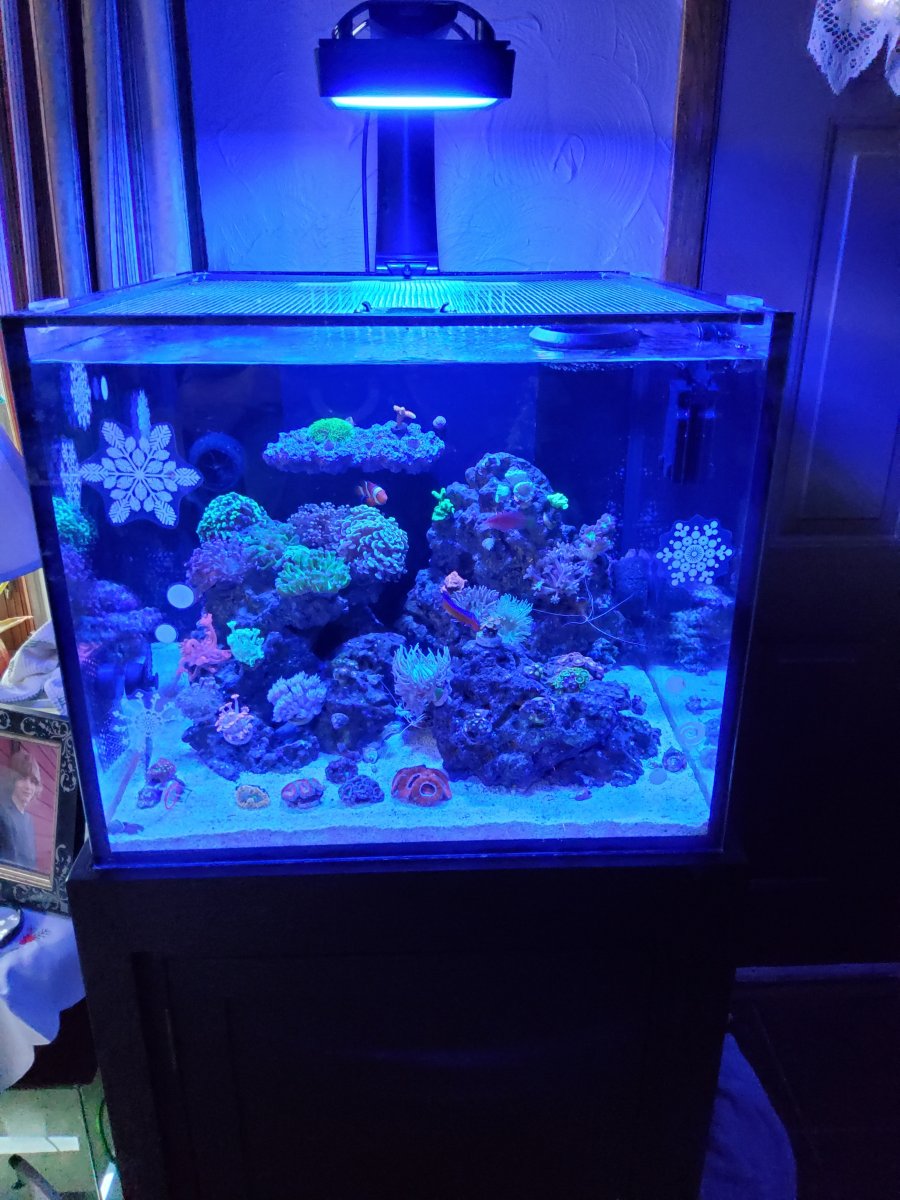 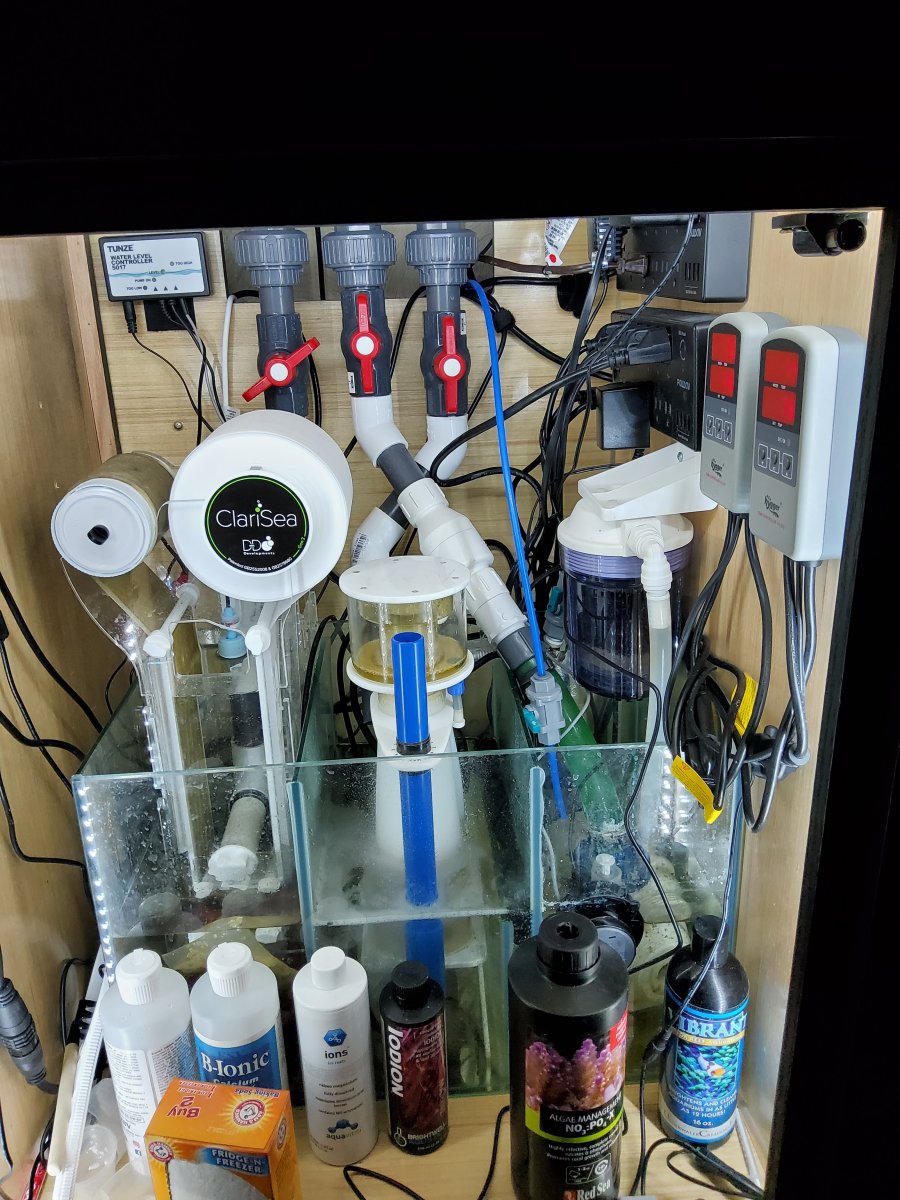 Rating - 0%
0   0   0
I picked up the Kamoer X1 dosing pump a few weeks ago to start dosing All For Reef. The pump is a solid dosing pump. Super easy to use and accurate.

I have to say, All For Reef is the stuff! No joke, my parameters have never been more stable and everything in my tank is doing great and loving it. With the stability and added trace elements I’m seeing a lot more growth. For my fifty gallon tank I'm only having to dose 13mls a day. Just six scoops of this stuff makes about 900mls so it’s definitely going to last me quite a while. It might even save me some money on salt and other additives that this one product has replaced. 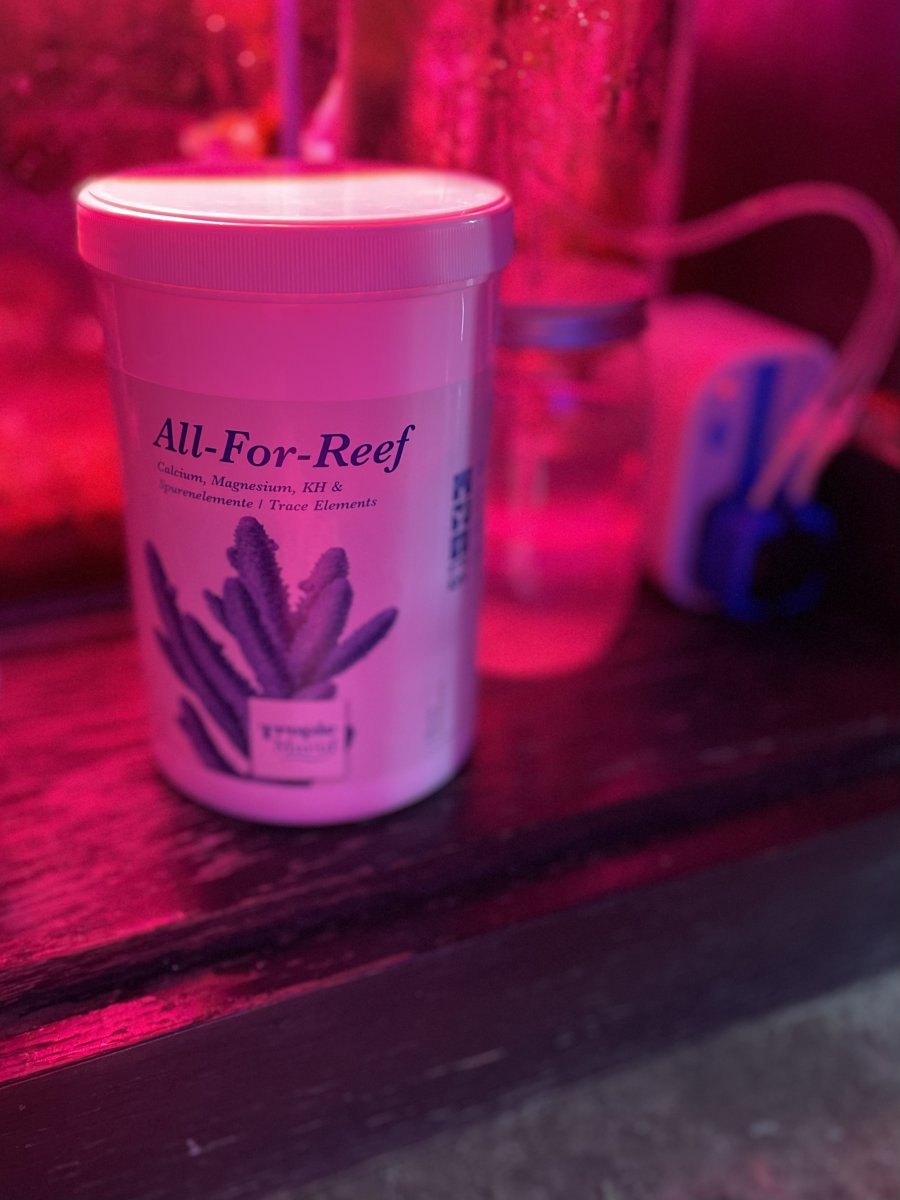 I’m also brewing up some more phyto right now so I figured I’d share a picture of my set up. I’m using Mercer of Montana’s phyto culture kit from Amazon. I’ve made multiple batches just from one order I made last year. I always just keep enough extra to start a new culture when I run low. 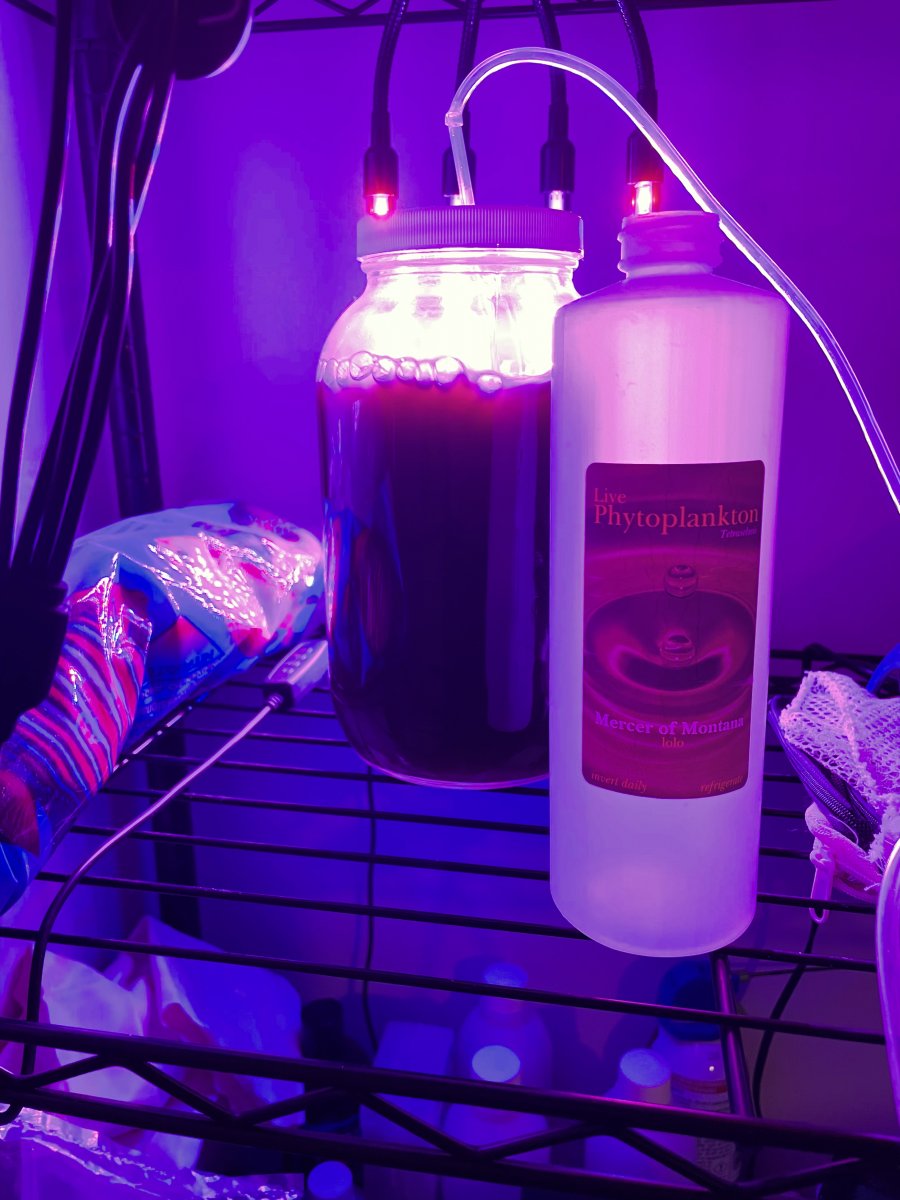 Rating - 0%
0   0   0
I was considering Phyto culture, how is that working out. How much trouble?
Basement is quite cold right now. Thinking it may not be adequate. I struggle to keep the tank warm with the sump in the basement in the winter.