I sold the tank off, my brother wanted it
Well.... he never set it up,

We since added a family room and we have a much better spot for an aquarium, I really enjoyed this cube while it was up. So I picked it up from his house. (Worked out, he never paid me for it anyway)

So it will be brought back to life...
Going to pull a couple pics from threads to kick it off.

video.nest.com
Last edited: Thursday at 10:14 AM


Added comments
It had a fairly large scratch on front. With water not very noticeable but it bothered me. 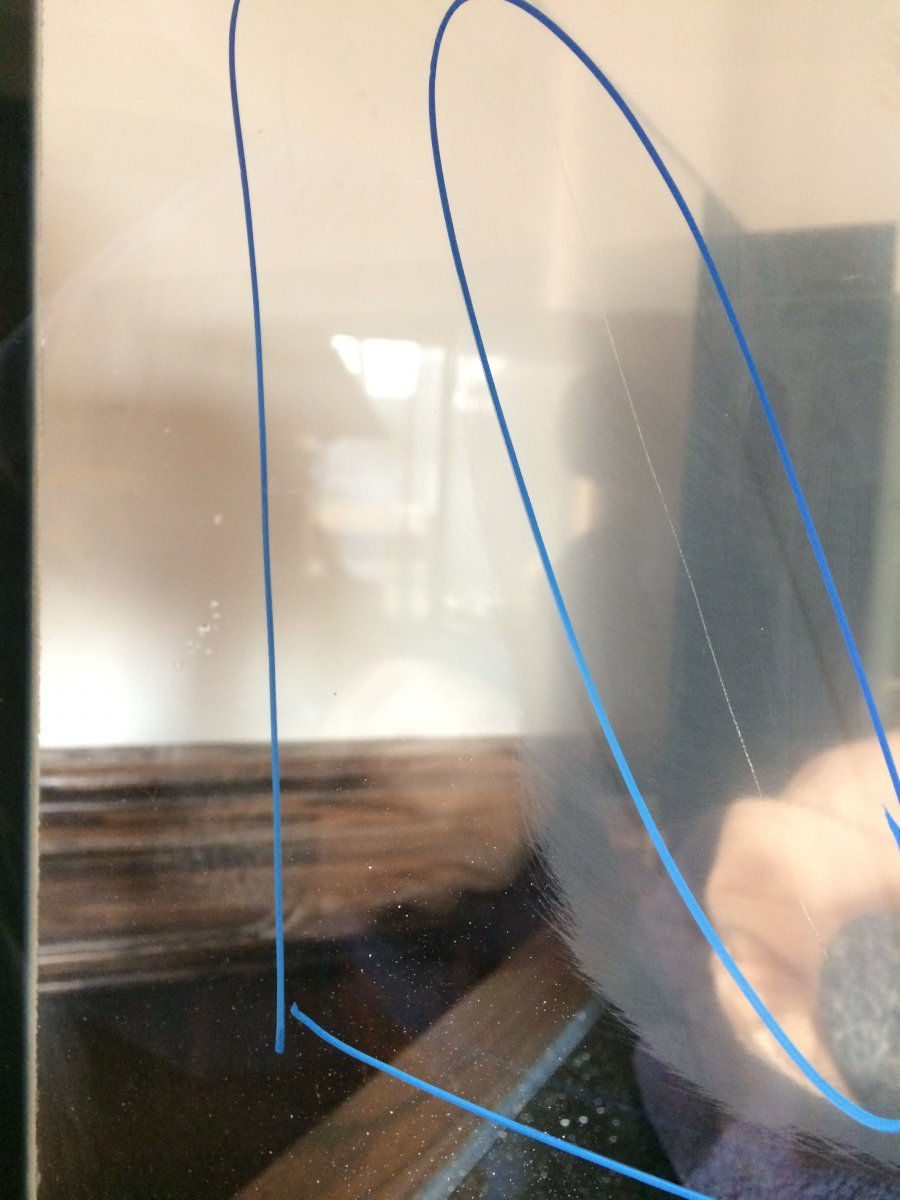 So I went through a learning curve and figured out how to polish glass...

Not bad... for first time 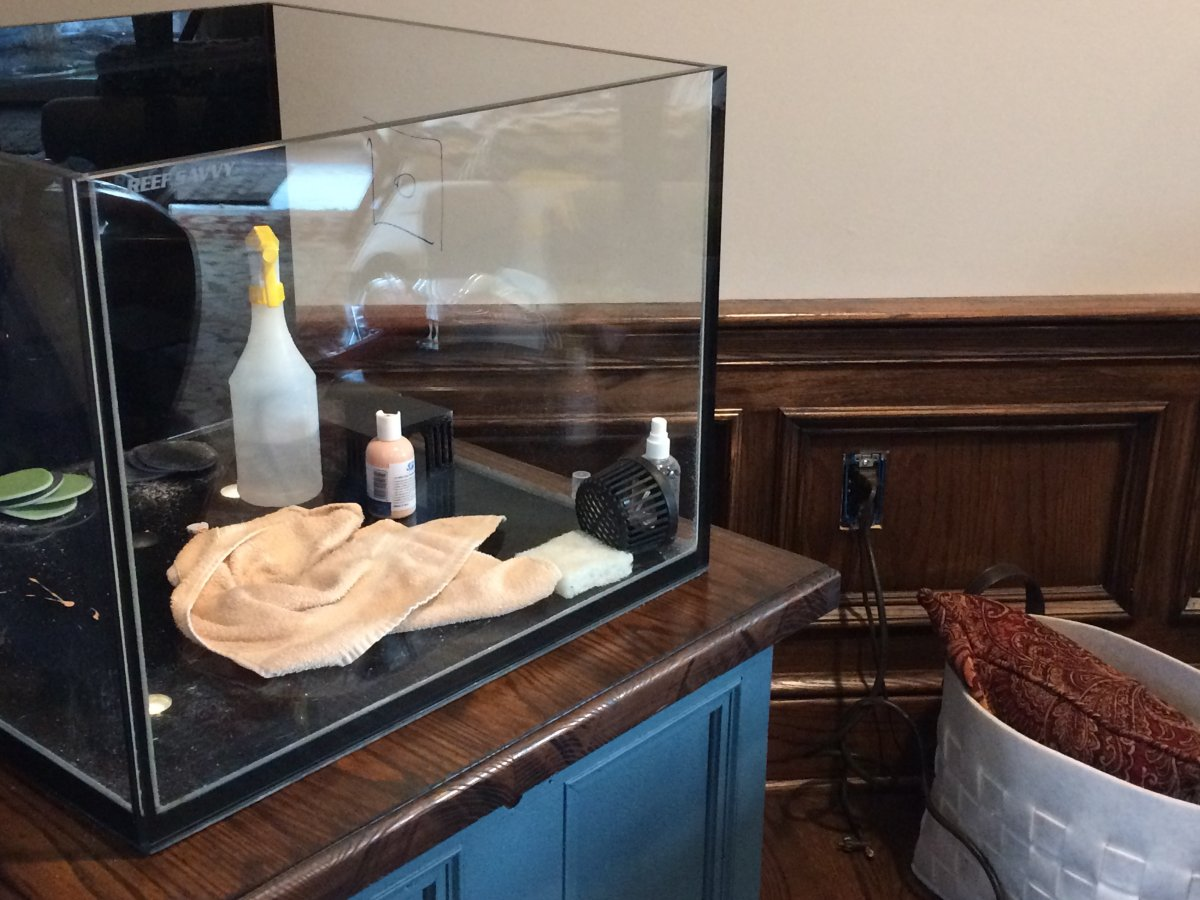 In a previous house I had plumbed a sump in the basement. In this house I had the aquariums basically set up on a finished back porch. (That had it's own issues) As mentioned we now have a nice room for an aquarium. I was torn, I just spent a lot of time finishing this room. and was hesitant in drilling into the floor or walls.


The first time I set this aquarium up I built a low profile stand out of an old antique door.
It had a slide out sump. It worked fine, but eventually the stand was a bit cramped after adding more equipment. 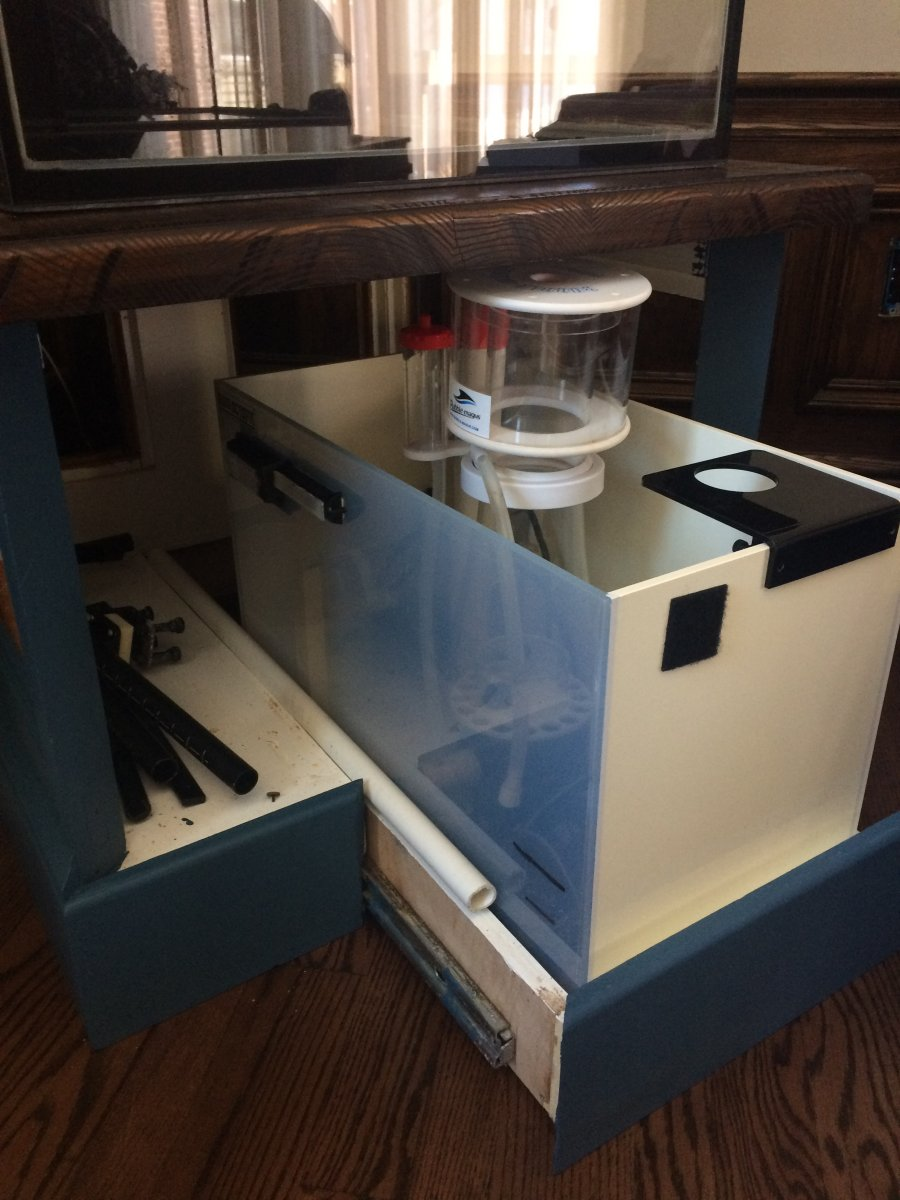 Finally I decided that I was going to drill, I chose drilling the base board I installed since I could easily replace if I decided to take the tank down. 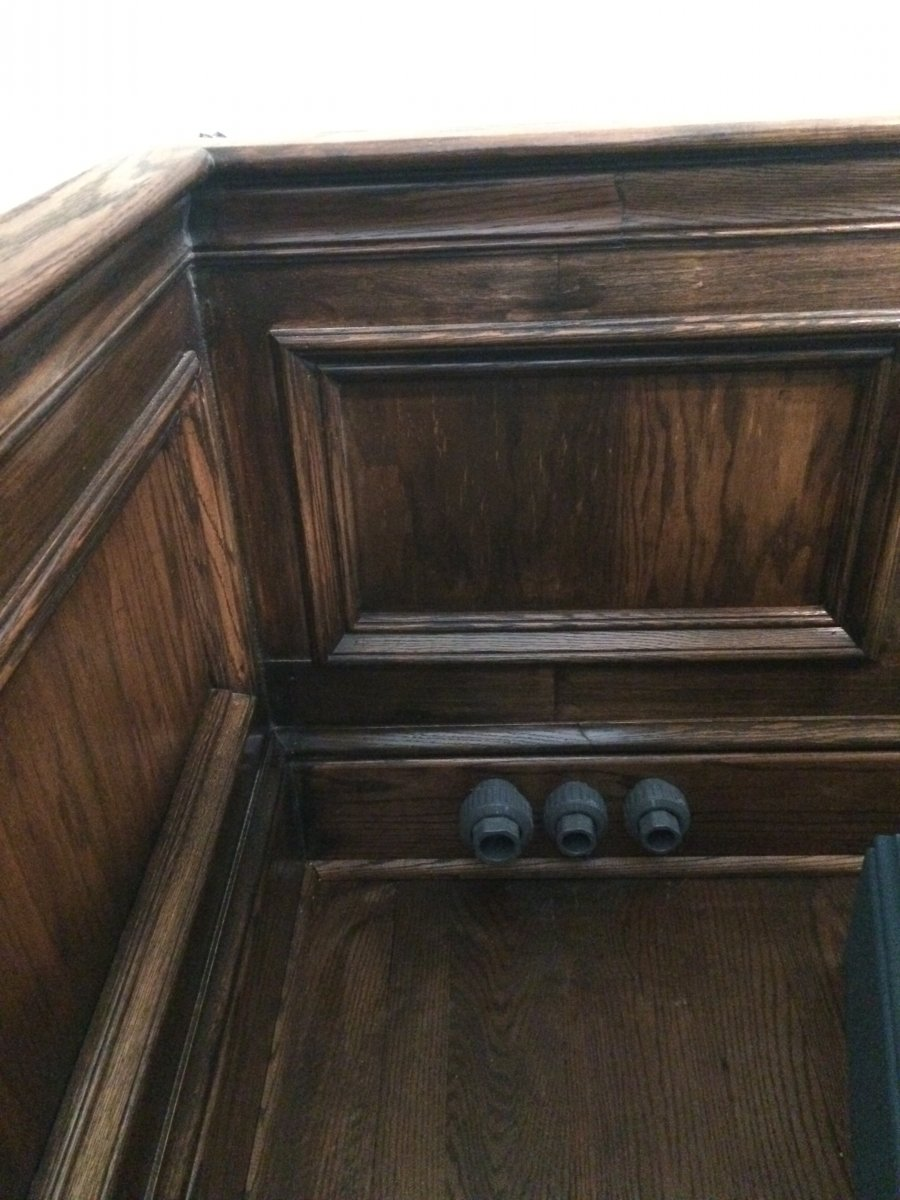 No turning back, I will have a basement sump.


Here is an early pic of the sump as I started to see if things are working as needed.
I will clean up and turn this area into a small fish area... This sump is from the 525 Red Sea reefer, it's almost as big as the cube aquarium. The empty Red Sea is sitting in the back porch room, wife wants me to sell it. Somehow I manage to change the subject. 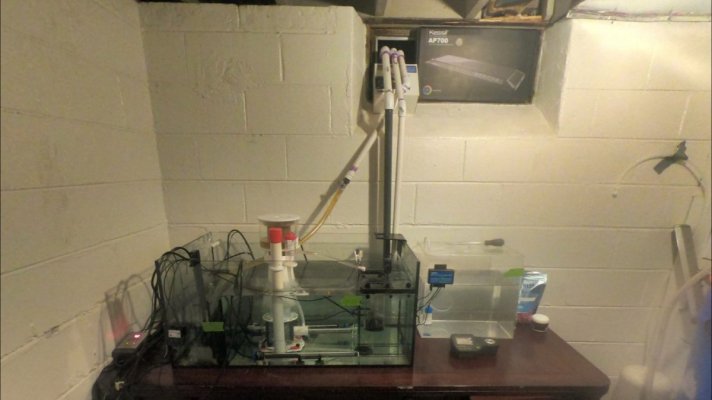 The aquarium now has water, this thread is to monitor progress. I found it nice to be able to look back and see how things have changed. Sometimes not always good, but always a learning experience.

In terms of simplicity, I think the basement sump was a good decision. It has already made everything much easier and there is no water spilled up stairs.
Last edited: Jun 8, 2021
OP

Since I have equipment already, I set up the Apex for the heaters as soon as water was in the aquarium. I jotted down notes in Apex fusion... I will see If I have I taken any pictures to bring the thread up to speed to current status.

If not this will give me a good excuse to dust off my camera moving forward.

My main goal for this aquarium, is to make the maintenance easy.

Speaking of that, have to go answer the door. Just received a package... a digital ALK tester just arrived

The unions on the baseboards blew my mind! My wife would veto me doing that, but I love it The slide out sump has the gears in my head spinning too lol

WiscoFishNut said:
The unions on the baseboards blew my mind! My wife would veto me doing that, but I love it The slide out sump has the gears in my head spinning too lol
Click to expand...

I thought it to be best option... Since I could could always cut and add a new piece of base board.
The decision was tough, it took a while to get the room finished and then I already started drilling into it

The slide out sump. If you go that route, Use "heavy duty slides", I could actually stand on that shelf. Put some thought into the plumbing, and if you have probes, think about wires.

I ended up putting way to much under the cabinet the first time around, I should have left the Apex and other electrical equipment enclosed on the wall near the tank. This time the Apex and display in in basement, however with fusion you can have a tablet at the aquarium and it works out nicely.
OP

This tank was started off a bit differently. The aquascape was created with dry rock and then soaked a week for cleaning.

Afterwards I put the "scape" in the sump with fresh salt water a small pump, heater and air stone.

Then I started to get seed bacteria from folks that I knew that had an aquarium set up. Basically small pieces of rubble were tossed in front of the pump in the sump. We also have tropicorium that has been around and have vats set up for a long time. i bought some rubble rock and even a few piece of rubble that was in their "live rock" vat. Basically it had coralline algae on it... I am sure they have some diversity in those vats that have been there for 20+ years. (Both good and bad)

I also visited GARF.org and seen that you could still buy "grunge". So I bought a few pounds of that stuff. I was just looking for "diversity" in bacteria...

I did this while trying to get the tank ready... Scratches removed, painted stand, plumbing, etc... 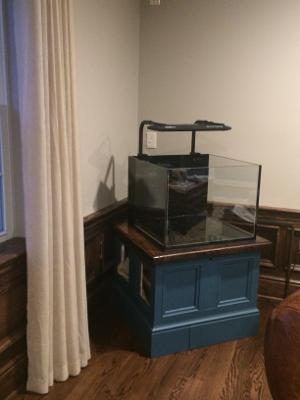 I was excited to get life into this aquarium. 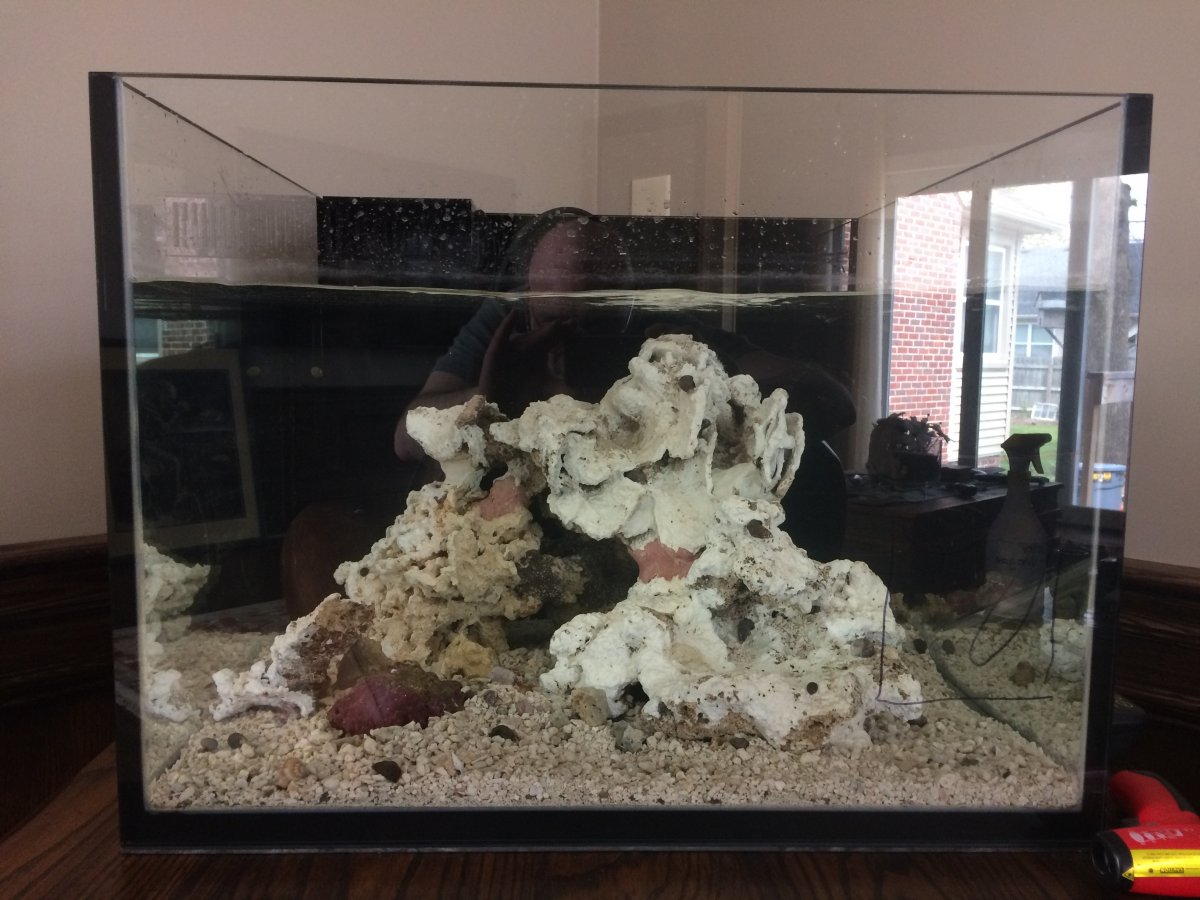 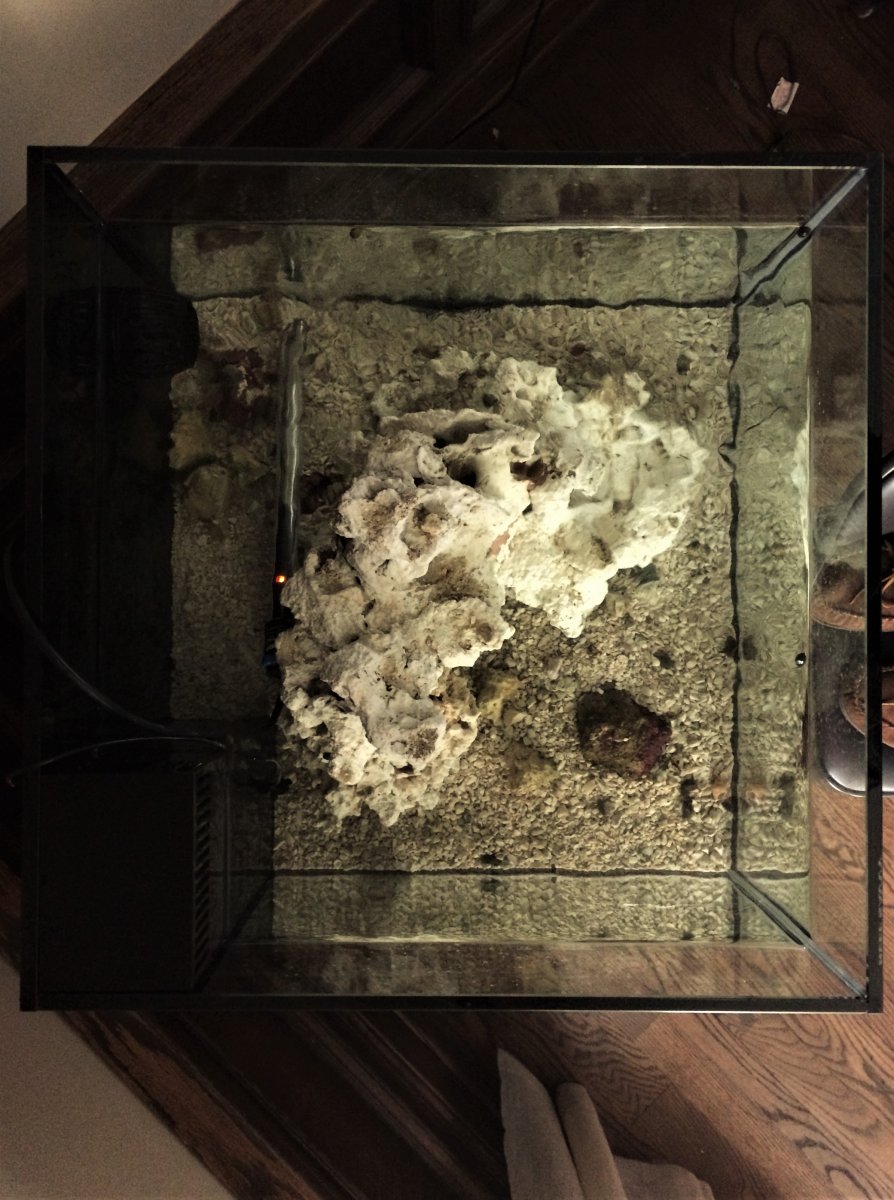 I was not even finished with the plumbing and I ran out and grabbed some clown fish, put some Dr.Tim's One & Only in and then plopped the fish in...

Note there is an airstone, pump and heater that was in use in the sump. I figured this will keep me motivated to get the plumbing done. 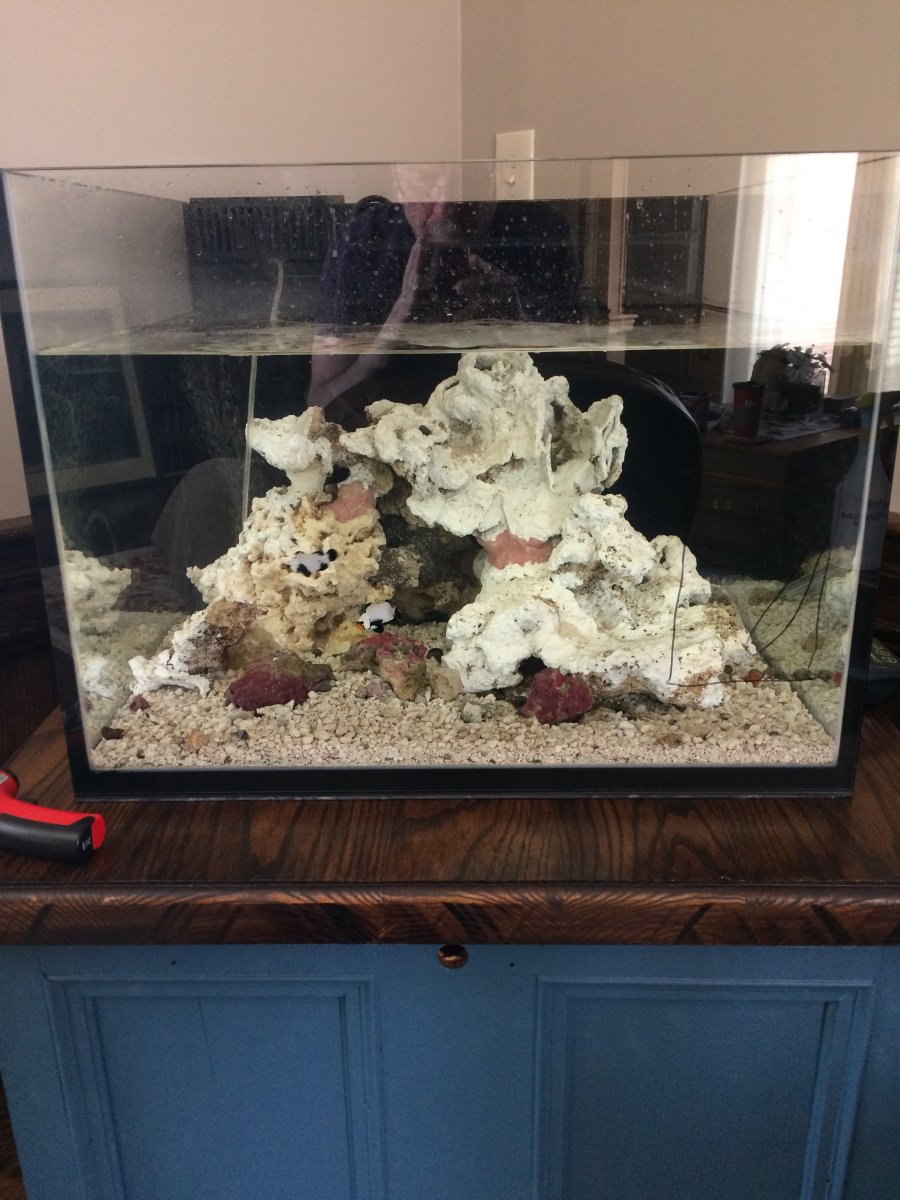 Plan in motion... All subject to change but a plan is in place... 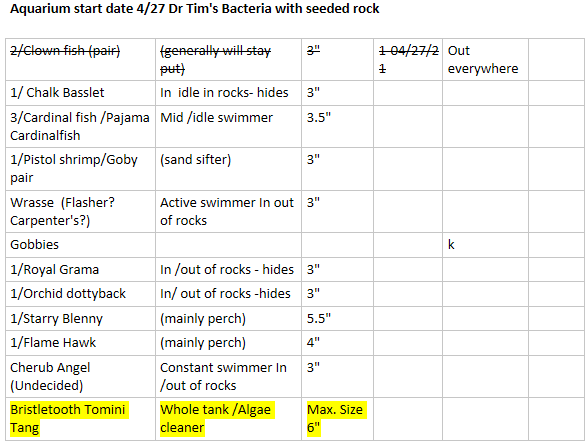 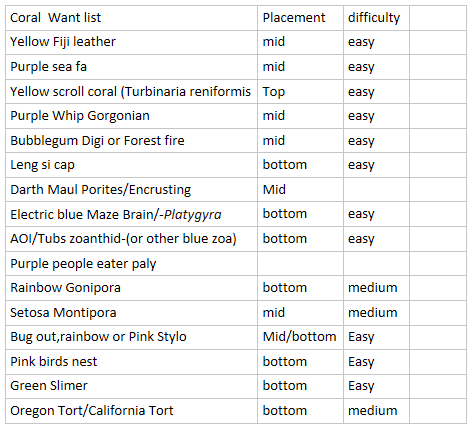 Plumbing was finished within the week, transferred the rest of the clean up crew from sump. A temp 360 Kessil light was added since we are now happily viewing the aquarium... even the black marker was cleaned off the glass, something my wife was bugging me about

Bare... But it is looking nice, and we are now enjoying the fish. 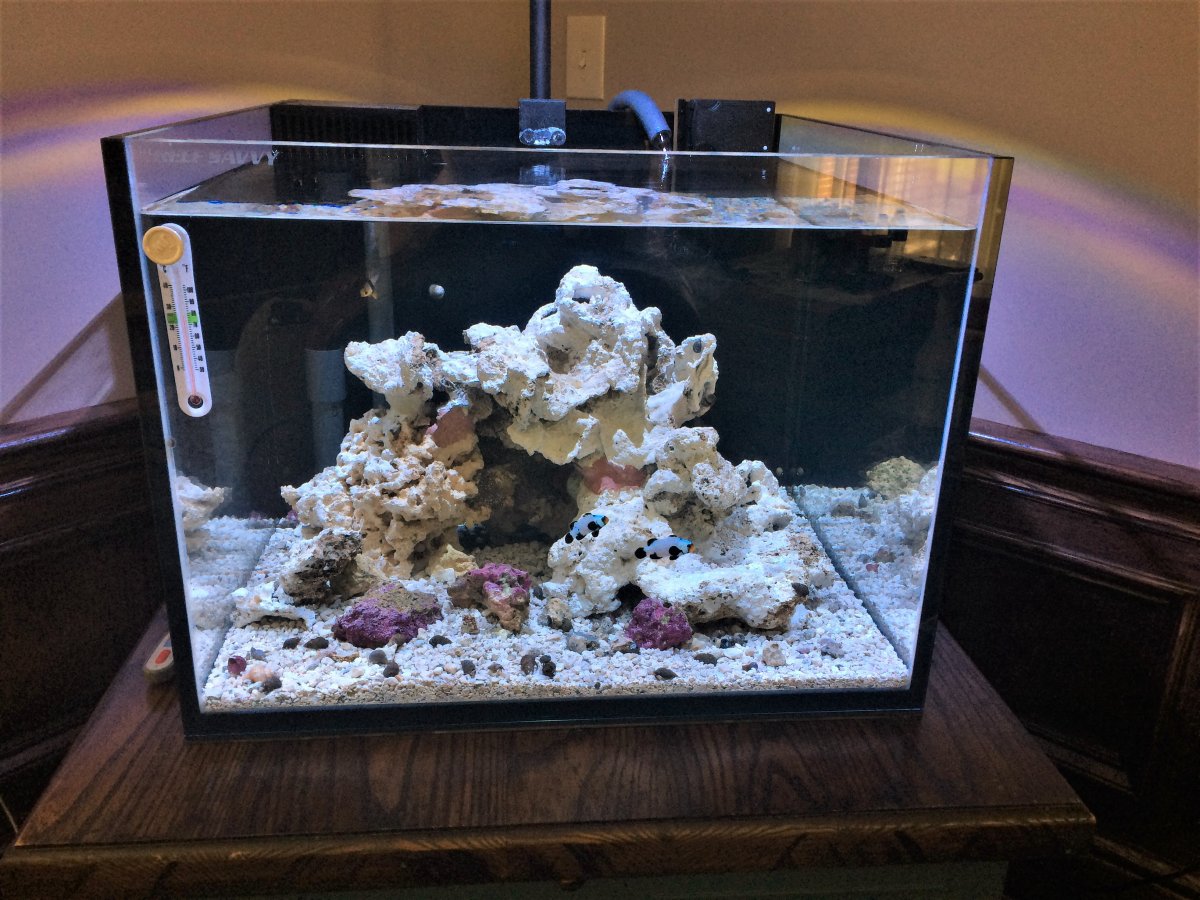 truepercs said:
Plumbing was finished within the week, transferred the rest of the clean up crew from sump. A temp 360 Kessil light was added since we are now happily viewing the aquarium... even the black marker was cleaned off the glass, something my wife was bugging me about

Bare... But it is looking nice, and we are now enjoying the fish.

On 5/08 The first coral was added... a tonga yellow leather. This will be a mixed reef, this was a must for me. Just did not realize it would be the first coral. The local shop had two small ones so i had to pick one up. I have not seen them around very often. 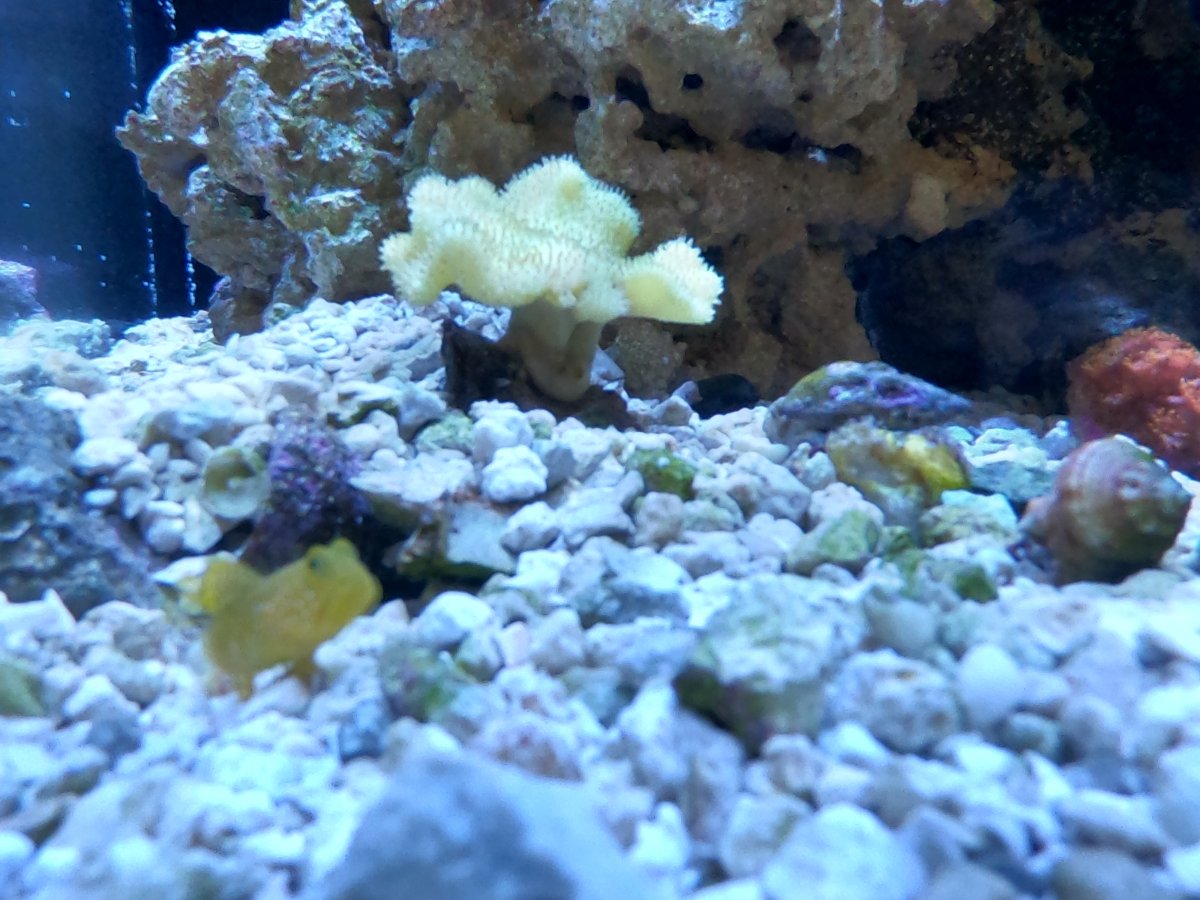 5/12
A frag of platygra/aka electric blue maze,gonipora(rainbow) and 5 small zoanthid polyps aka AOI's /light blue and a yellow center


5/17
In the first pic you can see a watchman goby was added,so he was not lonely a tiger shrimp was also placed in the aquarium. By the next morning they were living together.
Per notes the first water change was also on 5/17

5/24
A couple easier sps test frags were added. These were purchased from a local reefer /green slimer and a setosa. Nice size frags.... 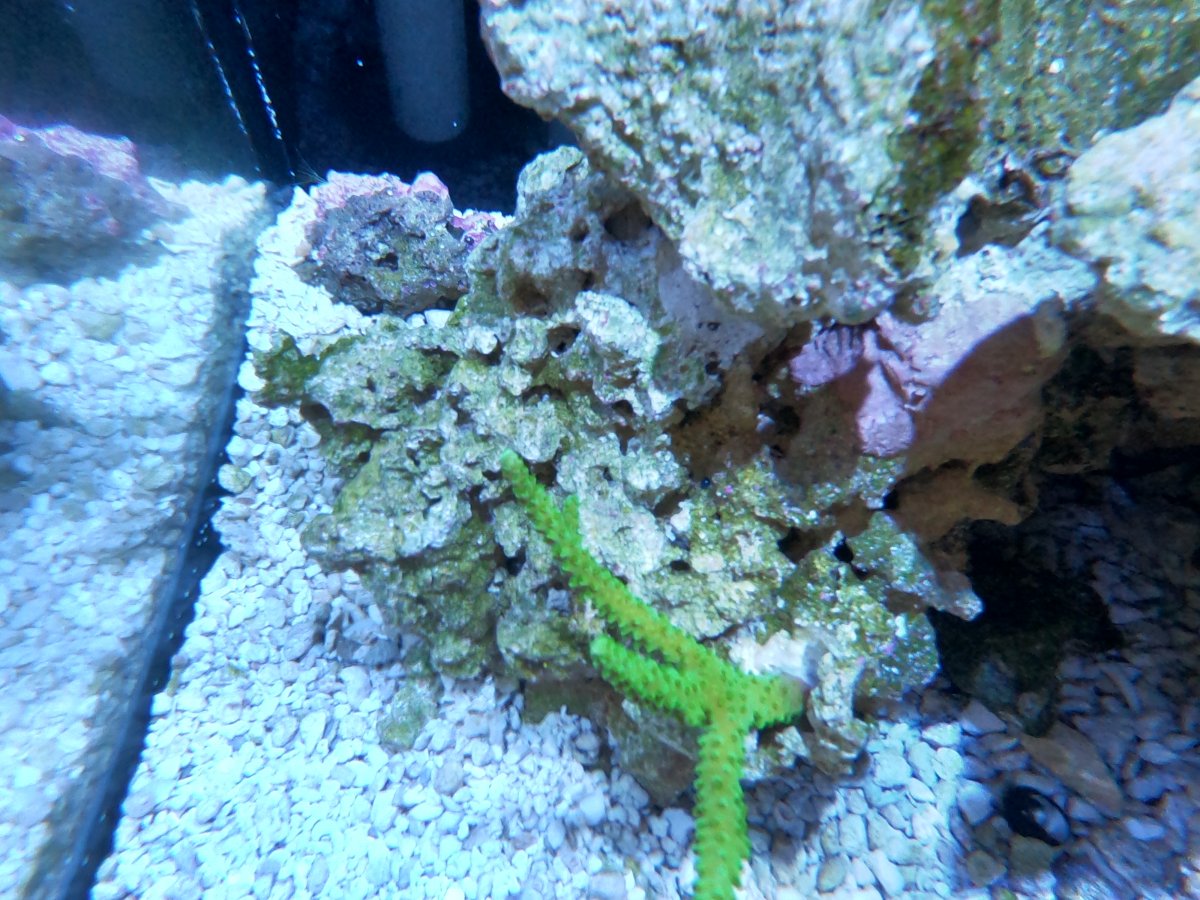 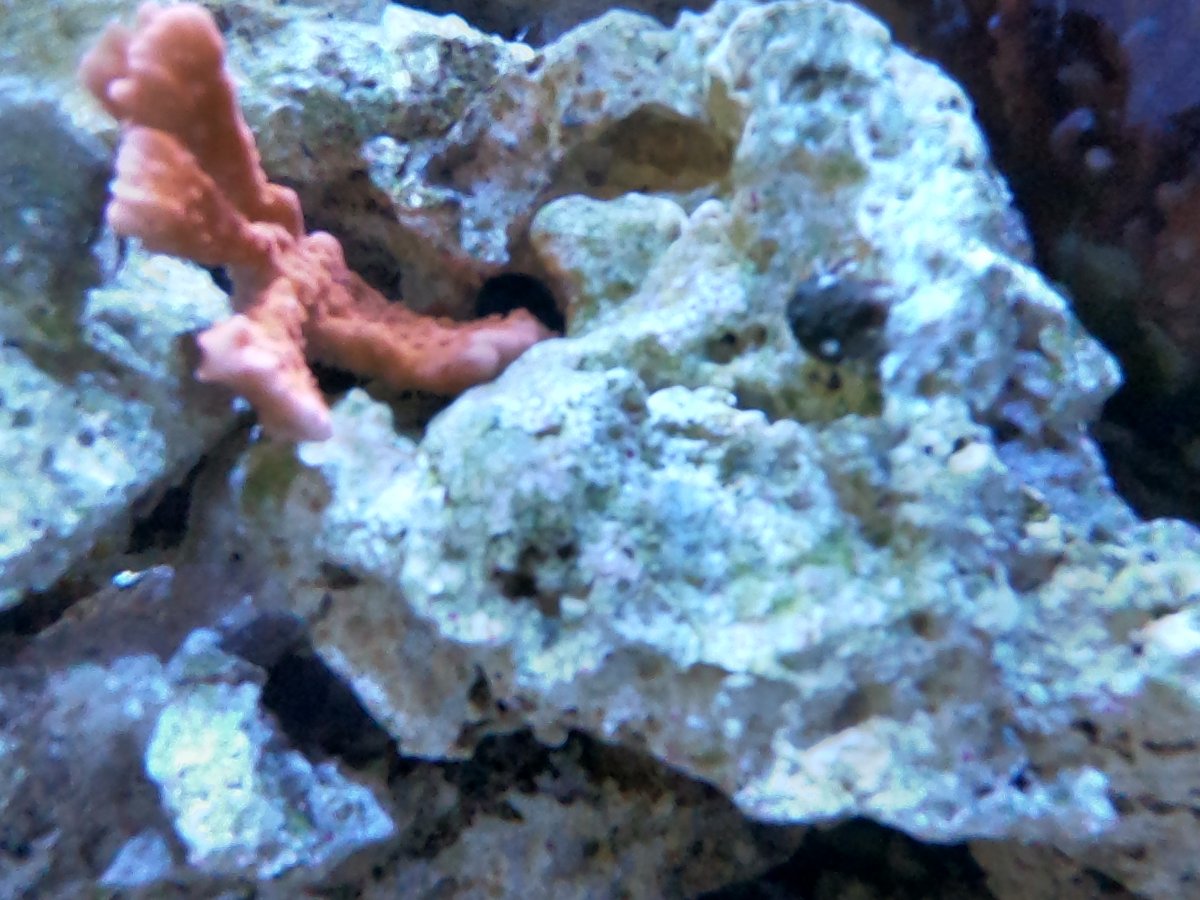 On 5/26 a local reefer offered up a few free small frags, figured that things appear to be going well so they were picked up and glued in
Not shown...
Pearlberry
Lemonlime time
Black widow
Walt disney

These are all very small, and seem to be doing well. I wish i took a pic as soon as i put them in. The plan is to take a pic each month to see if there is any progress.


I went in on a purchase of some small zoanthid colonies with my brother, we decided to split up at a later time. Can't argue with that

Top down photo mid day lighting... you can see the small goni and maze brain. The tubbs zoanthids were recently added, a fellow was tearing down his aquariums and sold a few things off at a pretty good price. 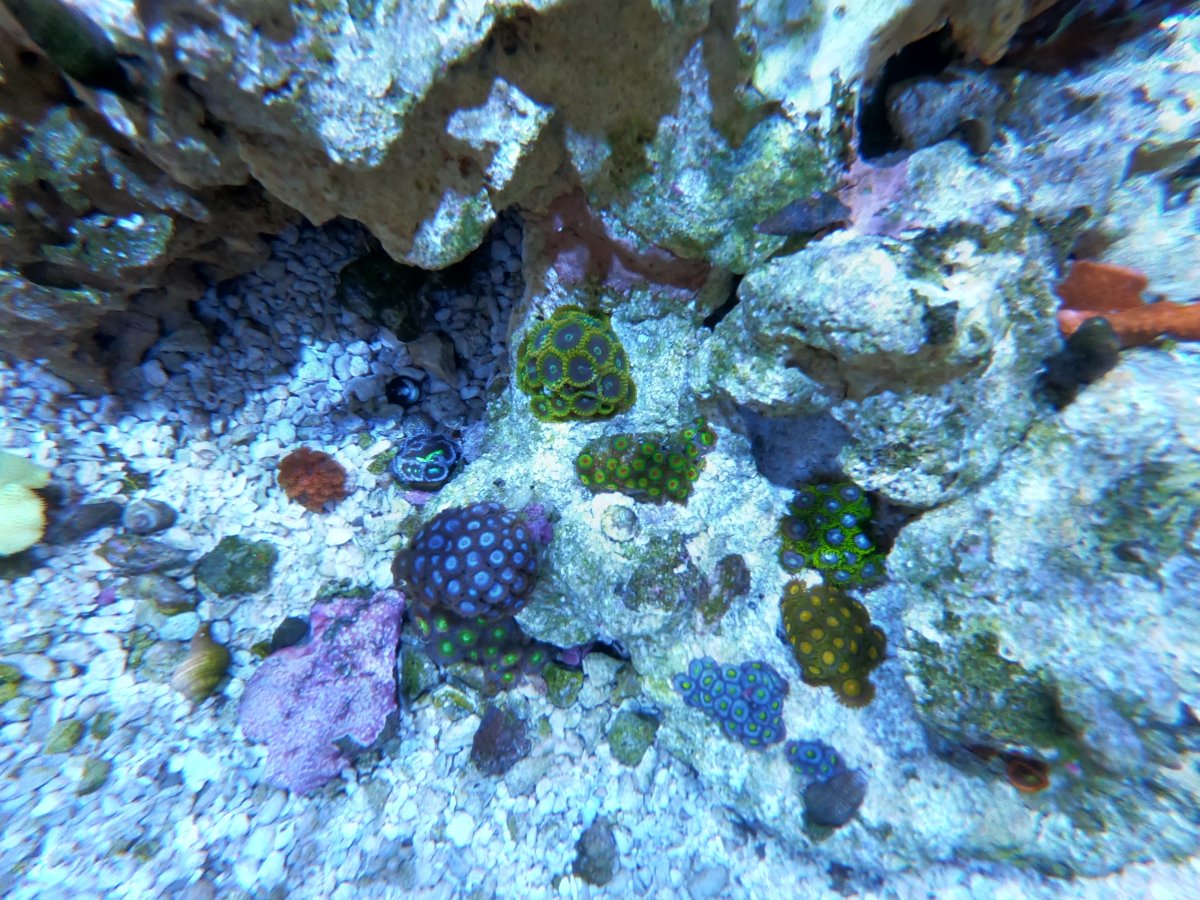 Reviewing old threads, the stocking list is going to be changed, wishful thinking on my part. It was a good time to review again as any future additions are getting into aggressive fish. I am removing the Grama and Dottyback from the list and skip down to the next fish on the list.

The Starry Blenny and Flamehawk will go in just have to determine the final fish or two... and how /when to add them.

Decided to go with a Cherub Angel Added 5/18
Daughter wants to take me to buy a fish (Flamehawk) as a fathers day gift. So may head up in the next day or so... The store had a Starry Blenny however he was one of the largest I have ever seen. Better to start out with a smaller specimen. Asked them to order a small one when they are available.

Only going to add a couple more coral frags and then just maintain to grow. Will start posting a monthly photo end of month. Coralline algae spots starting on rock work! 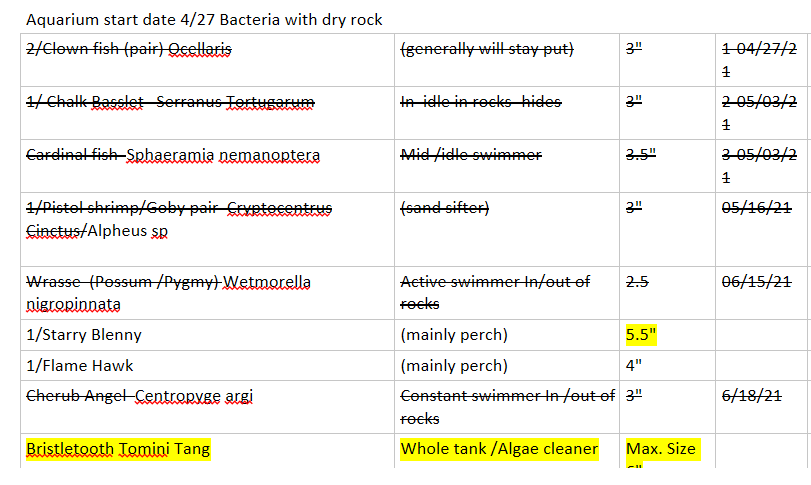 I will post the full tank shot shortly... Not a whole lot of coral but I do have all of the fish in...
Wow! that is a story on it's own...

Red fish…Two fish
I had to share my experience...


Updated... Not fun any more it had a sad ending

Red fish…Two fish I think we all have stories about our aquariums… I think this is worth sharing. Perhaps you have had a similar experience? Please share, I do not think I am the only one. On build “two” of the 45 gallon cube, it is just about complete when it comes to stacking fish. Only a...

Still have not pulled camera out, I have the zoanthid garden and most corals in front. But I set this up. Will add some on the side to make it look a bit better. However the aquarium is coming along. Goby and shrimp are on other side. This side has least going on but we will get there!