Typical Beta vs VHS ..
In this case brs owns the vhs factory.

areefer01 said:
You can hang or use 80/20. It has better mounting options that the ATI Straton. Maybe you mixed the two up possibly? Also there is no noise on the Gen 2. It is passive cooling. Same with the ATI straton. Not sure of your source but there isn't a thing wrong with the Gen 2 from Philips.
Click to expand...

I didn't say there was anything wrong with it - I just said it had limited mounting options. Perhaps it's simply too heavy to mount by any means other than hanging it.

Mywifeisgunnakillme said:
One year warranty is **** and indefensible for any reef light. My prediction is my own prediction, im not speculating at all.

Just read the threads on Sky on any forum....

The common thread is people are looking for companies that make just LEDs, and offer something unique and/or less expensive, or have made LEDs for a long time and they know it works and will be reliable function snd coral growth if they're paying that coin...
Click to expand...

The market data does not support your views. 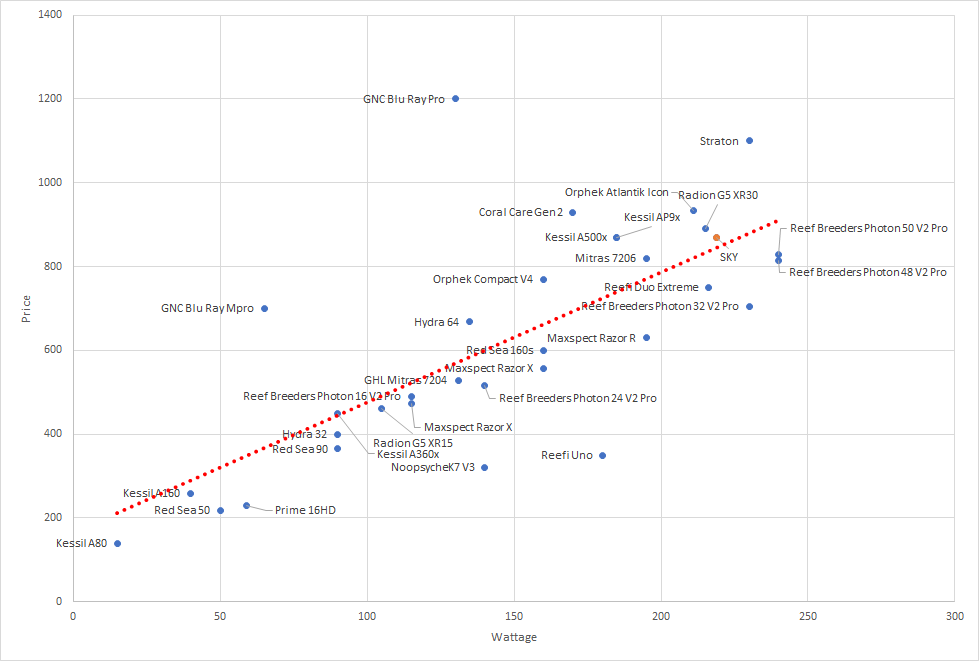 Warranty:
Note that the EU requires a 2 yr warranty which is why many offer that: 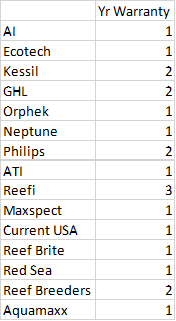 Mywifeisgunnakillme said:
in the days of covid for LEDs... if in stock... it aint selling...
Click to expand...

Out of stock is a sign of a stressed supply chain management including the lack of funds to keep proper inventory on hand. If they cannot produce and distribute new lights to keep them in stock..... why would they be able to keep spare parts on hand for future repairs to support a warranty?

Neptune has done a great job with the release. They have balanced shipments to online vendors and LFS. The shipments have been staggered to ensure the proper channels have stock.

There have been 0 large scale issues with the product, and the common theme among actual users is that it is a great light, both in construction and performance.


Mywifeisgunnakillme said:
within three years of this date, Neptune will not have a second generation light for sale or for preorder
Click to expand...

Why would they need a new light in the next 3 years? If it performs well and has no issues, there is no reason to change. I would not be surprised if they don't touch the design for 5 years.

This thread illustrates why we can’t have nice things...

Sky owners: how do you download other users light profiles? Couldn’t find it anywhere in Apex. Thank you!
A

Naturalreef said:
Sky owners: how do you download other users light profiles? Couldn’t find it anywhere in Apex. Thank you!
Click to expand...

That is more or less it I believe. Let me know if there is any clarity needed. Just went through this quickly. Sorry if I missed anything but this should get you started at least. All done via fusion in my example. 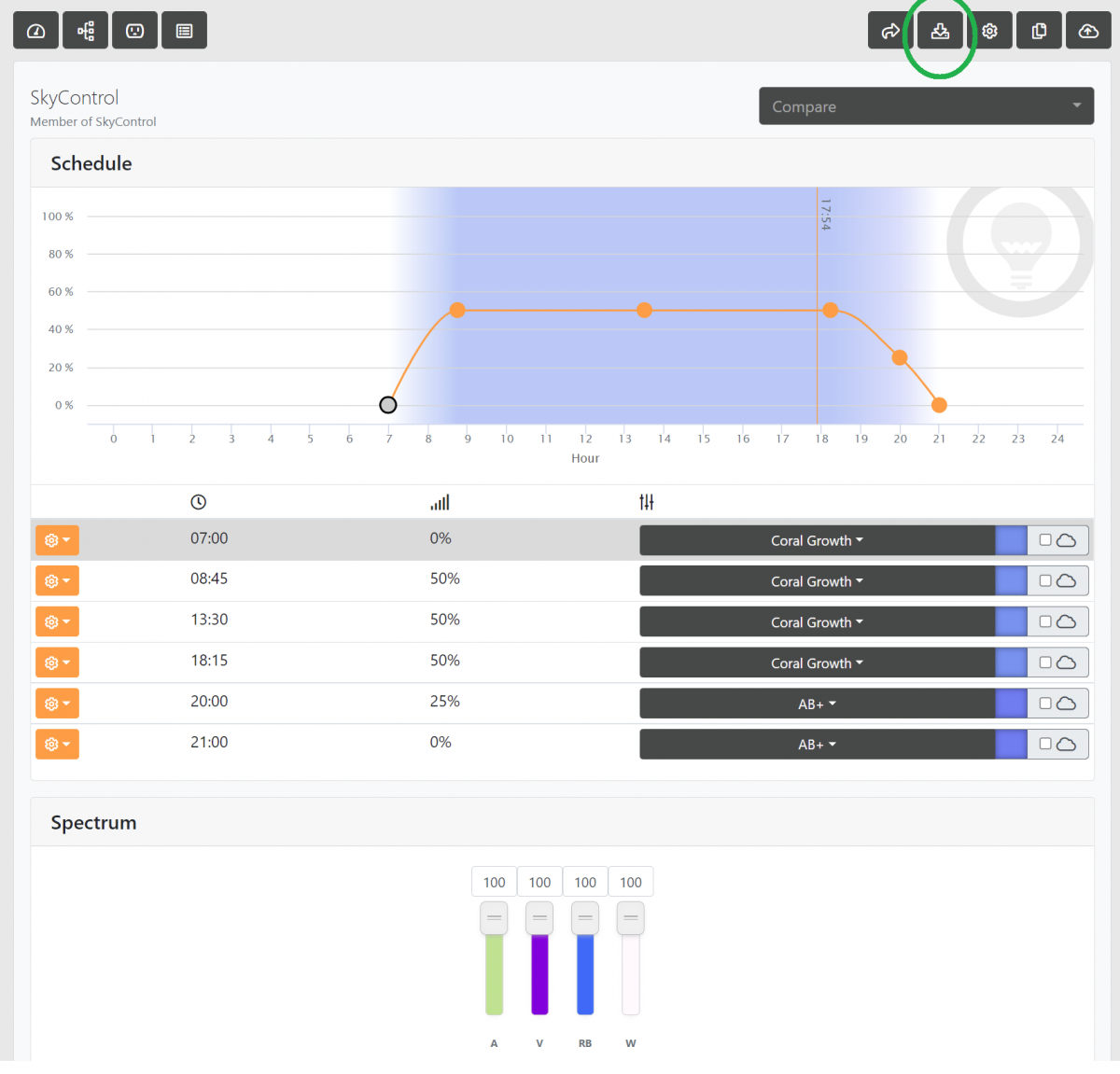 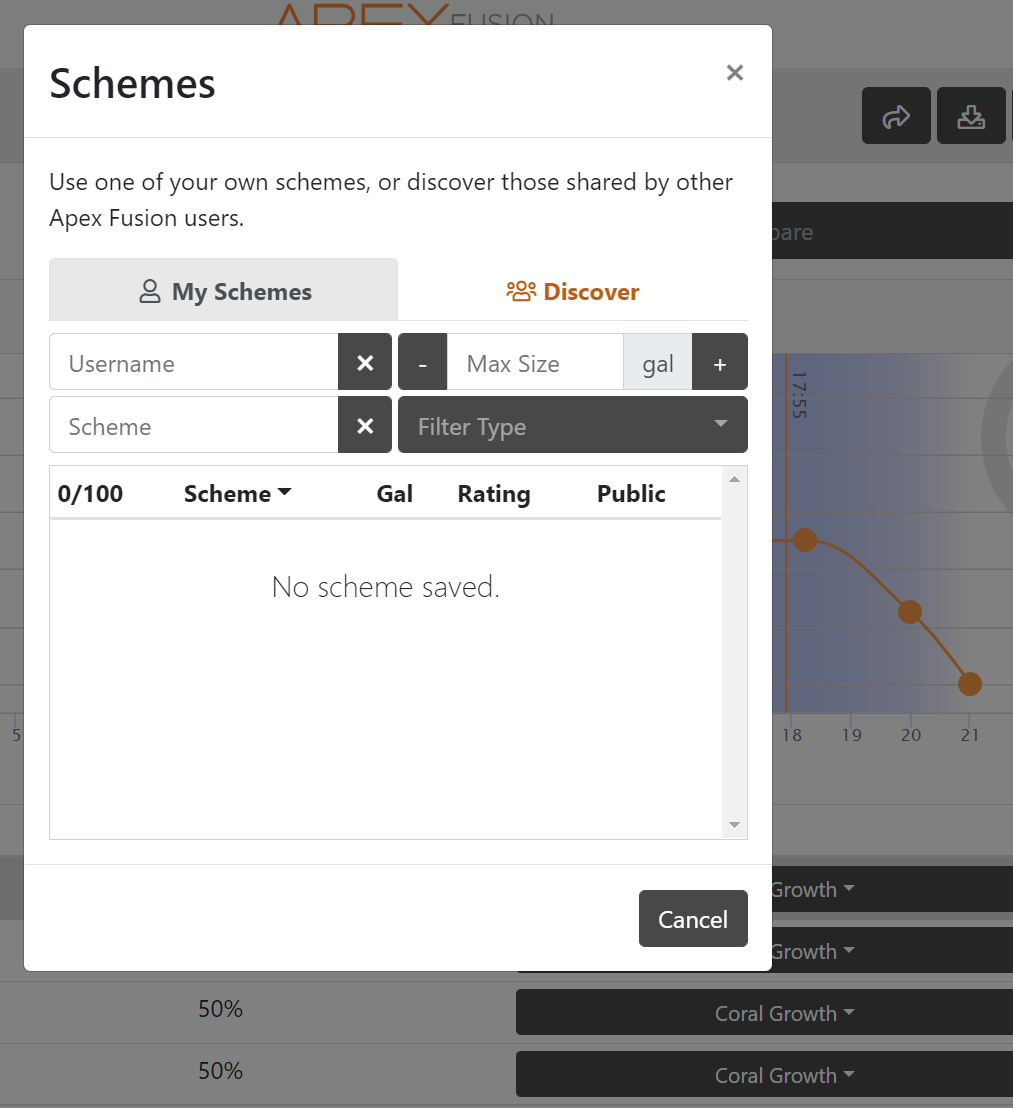 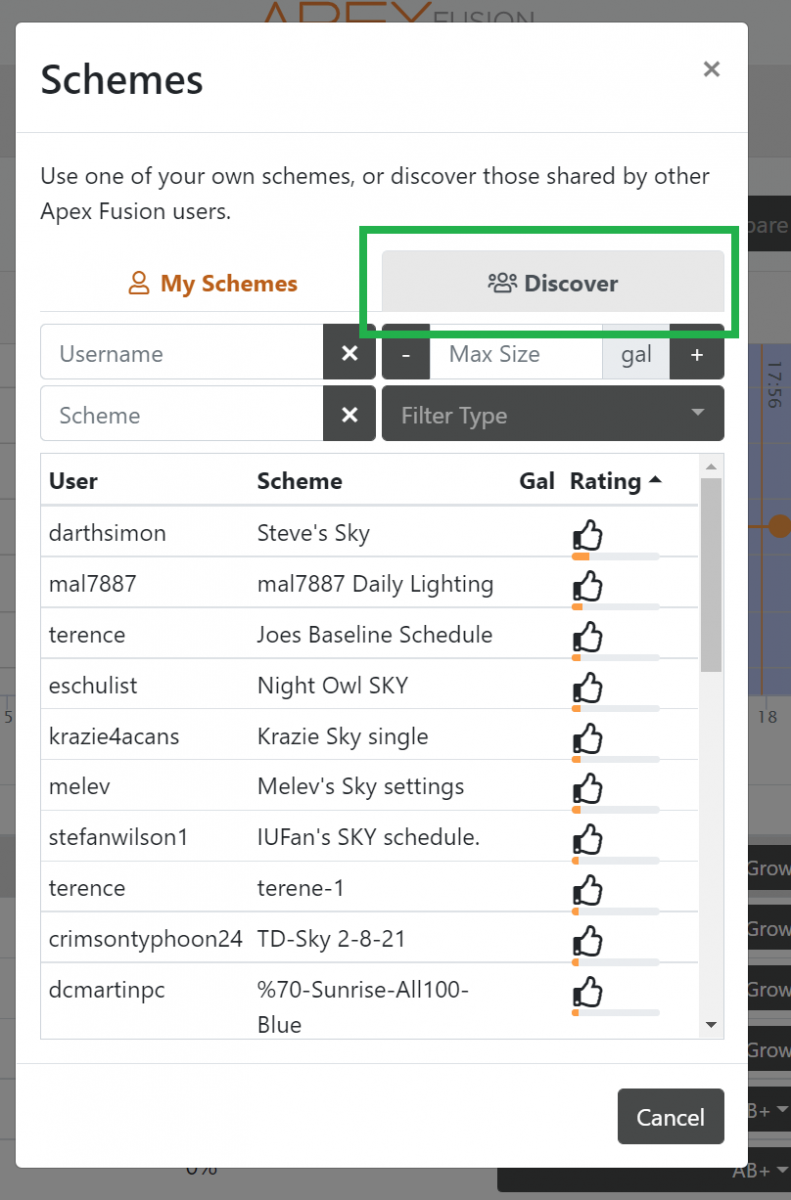 Thank you very much for the detailed reply Areef!
A

Naturalreef said:
Thank you very much for the detailed reply Areef!
Click to expand...

You are most welcome. Have a great evening!
N

Neptune Sky light spill shade is ready! I printed it in gray, but black and other colors are always available. I will create a classified soon with pricing. Feel free to contact me if you need one or more sooner rather than later.

Replaced a single XR15 G4 with a Sky. Best way to connect the Sky to a Apex Classic 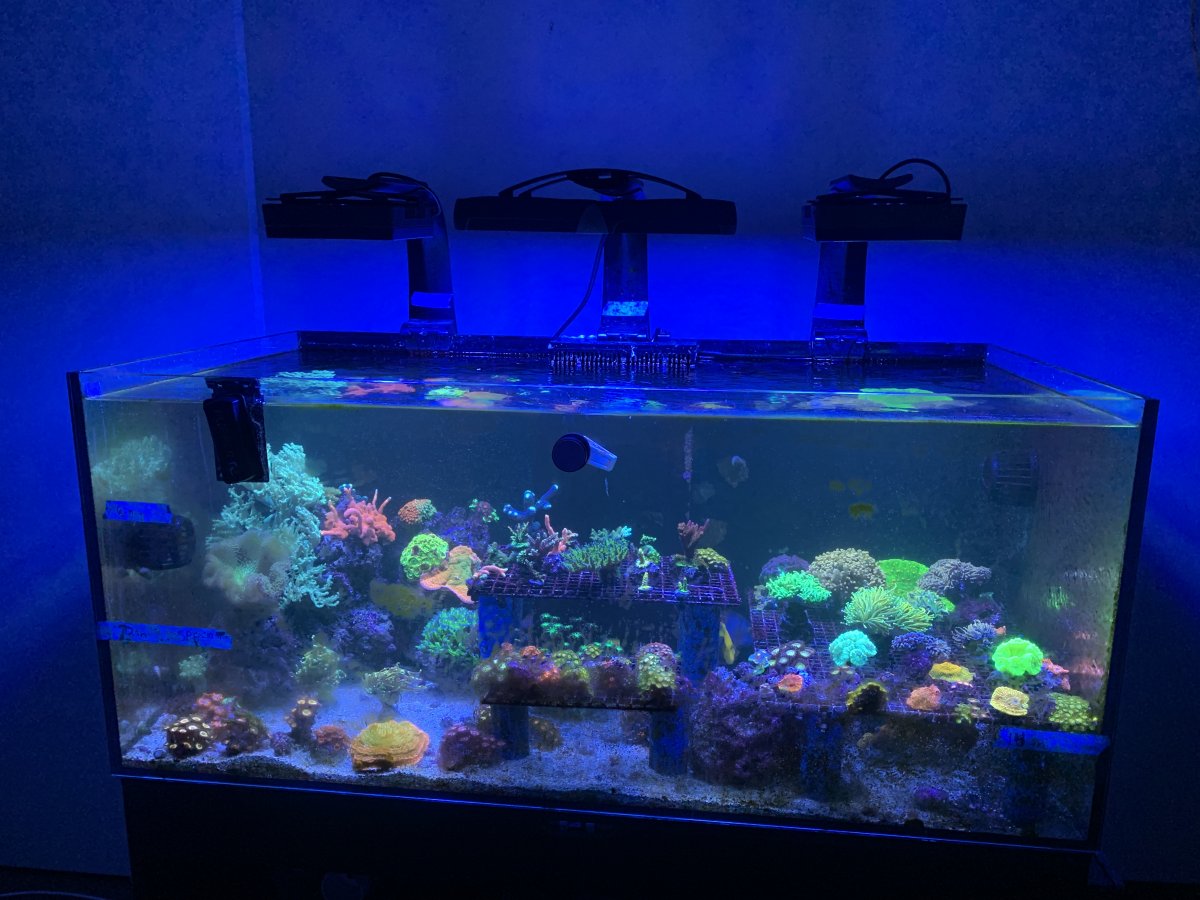 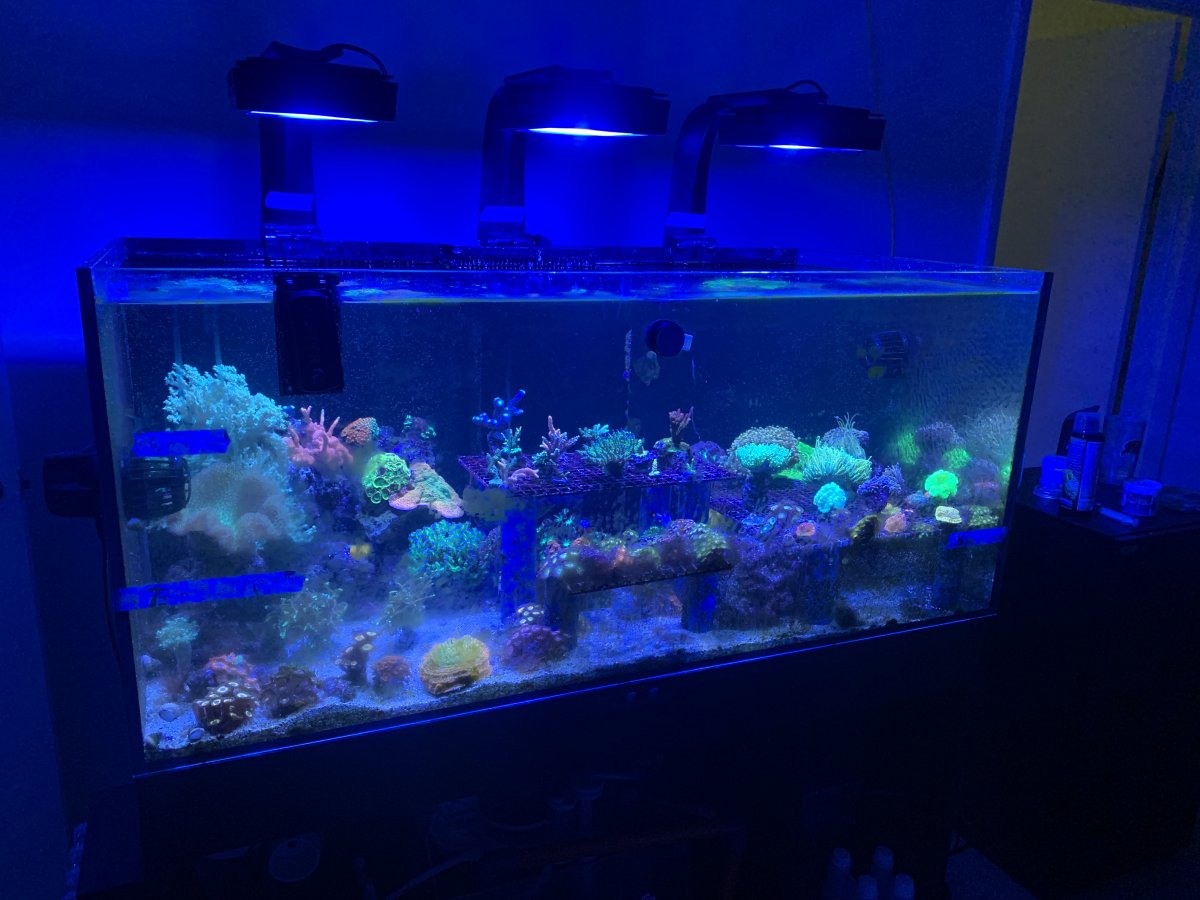 You do not need to connect it at all. The SKY will use the phone app via Bluetooth. Works great and has amazing range.

EDIT: Re-read your post. Are you asking how to connect it? It looks like you already have the light replaced and on. So now you just decide if you want to connect it to the Apex via Aquabus (wired) or wirelessly to your Apple or Android mobile device.

areefer01 said:
You do not need to connect it at all. The SKY will use the phone app via Bluetooth. Works great and has amazing range.

EDIT: Re-read your post. Are you asking how to connect it? It looks like you already have the light replaced and on. So now you just decide if you want to connect it to the Apex via Aquabus (wired) or wirelessly to your Apple or Android mobile device.
Click to expand...

I connected to it locally via bluetooth. I'd prefer to hardwire to my Apex Classic if its possible. I am thinking it can be wired into a Aquabus port on the EB8?

Just a quick update. My light was not working correctly. Opened a ticket with Neptune and had a new light sent and at my door in 24hours. New light is running perfectly!

A few initial thoughts:
-Unbelievably less shadowing and its not close
-I don’t mind the coating at all
-Great coverage
-Easy to program
-Corals look great, we will see how they settle in.
-Significantly cooler than Radions. After running all day my XR15 were 102deg each. The Sky 82…… 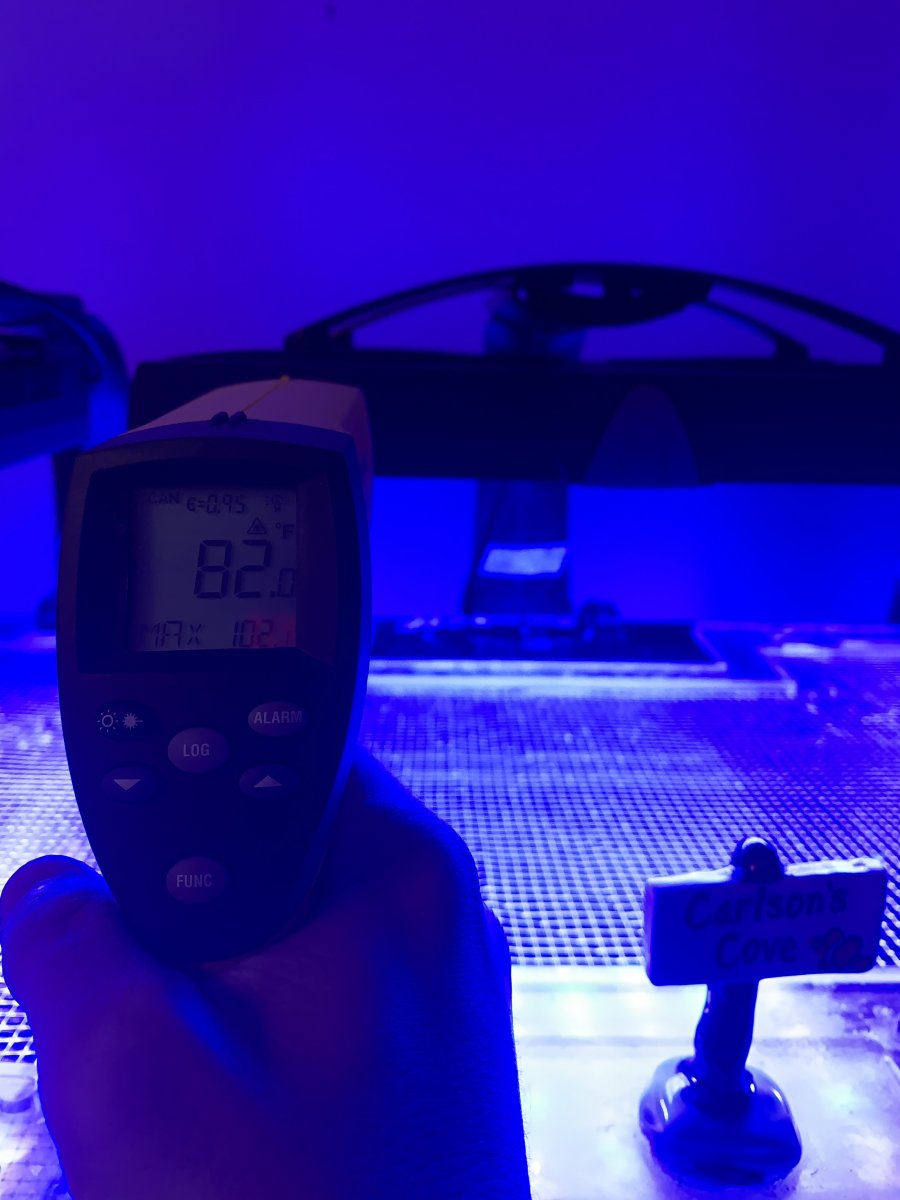 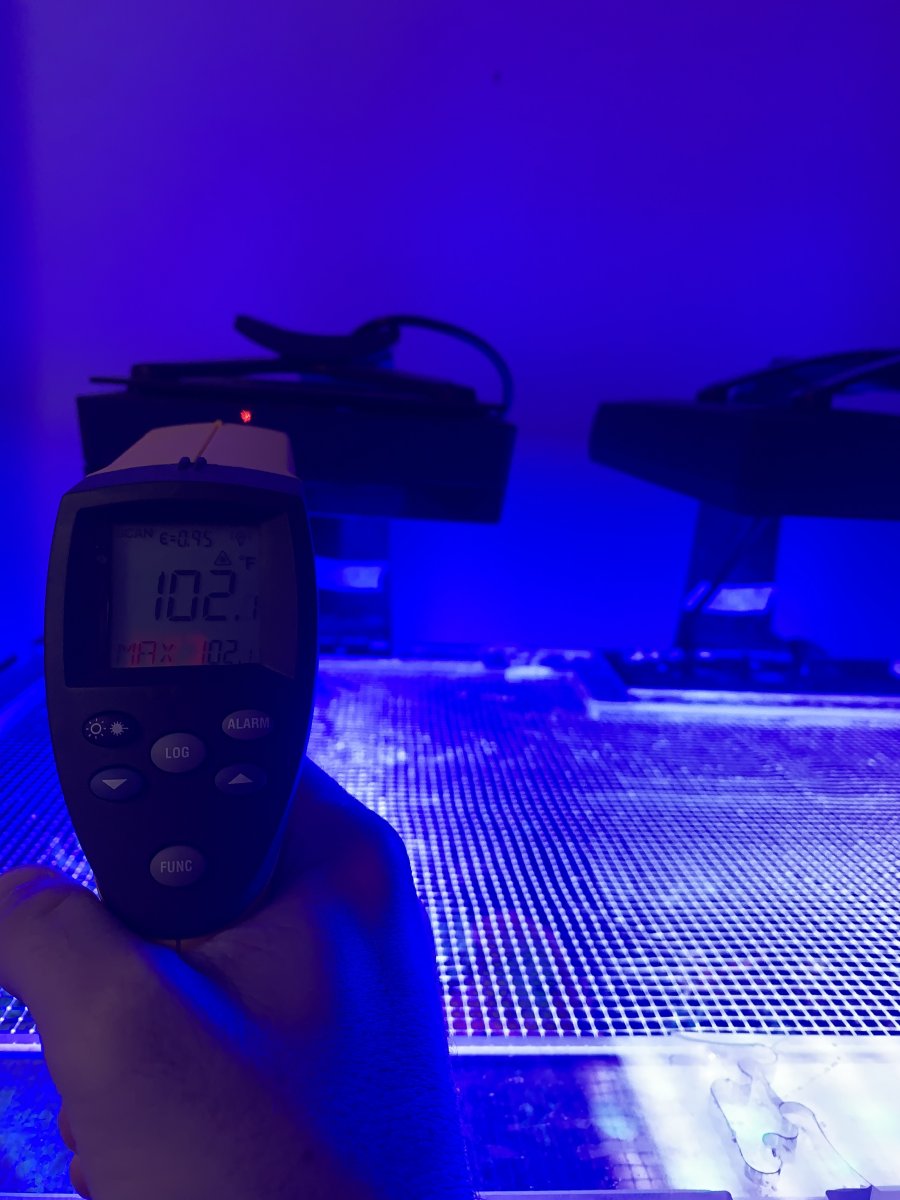 Location
Not where I want to be...

Read this thread with great interest.

Researching lighting for my own build, I am concerned that both the Philips and the Sky are using what appears to be the same backplane type mount for the LEDs. This is the same method that made $199 LEDs from China not so great and very failure prone 5 years ago. However, keeping water, and more importantly, water vapor, out of the enclosure is something the Philips does much better than the Sky.

Both LED backplanes have LED clusters where the cluster is series-wired when attached to the backplane. This forces the question that, should you lose an LED in the string, do you lose the cluster?

I plan on going with the Philips. An LFS near me let me tear down both. The Philips seemed more like an IP65-IP68 level of enclosure, while the Sky is more of an IP54 enclosure.

The LED makeup and backplane were almost identical, and both appeared to be a Philips product.

In my opinion, the diffuser on the Sky was not as good as the Philips.

Overall, the Philips is, in my opinion as an engineer, a well-made industrial unit. The Sky is not as good from a build standard except for the backplane, which again, seems to be made by Philips. The Sky diffuser is different as well - could be good, could be bad. No data.

From a features aspect, the Sky brings more to the table for communication with a system. But that's all it brings in my opinion. It is not a better unit than the Philips, it just happens to talk to the Apex system. Not really necessary in my opinion.

It's been said that there won't be a version 2 of these lights from Neptune in 5 years. Yes, there will be. Neptune is never stagnant. And in my opinion, based on the enclosure alone there will be a plethora of failures from water vapor intrusion that will neccessitate an update.

BRS has no need to carry Philips. In their mind, they already do, and since they own Neptune (I believe), why should they carry what they see as "the comeptitor's product"?

My opinions only based on personal observation.

Some electrons were mildly inconvenienced during the transmission of this post.

Current led diodes seem to have built in bypasses in case of failing open.
Some lights using led " egg" diodes (3w " bridgelux" ect) use a discreet shunt on the boards. At least this is my opinion.
YMMV.
There is no longer an excuse to not build a commercial unit without some consideration of diode failure in series.

Location
Not where I want to be...

Good to know. Thanks!

Warning! Do not attempt to do this. For professionals only! LOL. An anti-siphon line blew out of one return line and sprayed one of my SKYs (top and bottom) with saltwater for a few hours. There was 15 gallons of water on the floor, the ATO dropped the salinity to 25 ppt... The APEX shut down and was flashing orange. I figured the SKY was toast and unplugged it. I would have time the next day to put a new light up, but figured what the heck, I'll plug the SKY back in and see what happens. To my amazement, it lighted right up and has been running just fine for about 3 days now.