Rating - 0%
0   0   0
I never thought I'd be setting up an NPS Tank so soon, and also in a tank that's pretty small for an NPS setup such as 20 gallons but here we are. Can't wait for the Journey ahead!
The Backstory | So at first my plan was to house NPS Corals in my Macroalgae Tank (Build Thread here if you want to check how that one is doing) such as Sun Corals, Dendros, and an NPS Gorgonian or 2. But then the thought came up that maybe some of the meatier ones such as the Suns or Dendros could pose a threat to an unaware Sexy Shrimp and since I already had Sexy Shrimp in the tank and was set on keeping them. The idea hatched while Petco still had their 50% sale going and I went for it. I snagged an Aqueon 20 Gallon Long and the pieces started coming together from there.

Inspiration | My Local Public Aquarium, the Seattle Aquarium, has a very beautiful and well known NPS Display in their Pacific Coral Reefs Gallery which was one of the big inspirations for this build. Filled with Suns, Dendros, Gorgonians, and Wire Corals. It's a very beautiful tank and I love looking at it every time I go. The Aquarium of the Pacific and Steinhart Aquarium also have beautiful NPS Displays, although I see them less often since they're in California.
In the hobby however, we don't see too many NPS displays due to the work they take to maintain and look good. Some of the big hobby inspirations that also inspired this tank are Mark Mikina, most notably his Mr. Aqua 12G Long Nano NPS Tank , along with his Elos 137G NPS Tank . Mike Cao and his ADA 65G NPS Tank . Lam Ngyuen and his amazing Waterbox 130 Macroalgae and NPS Display , and Levi Peterson (aka the Oddball_Reefer) .

The Build | Ok now let's get to the fun part!
Tank: Aqueon 20G Long
Filtration: Aquaclear 70
Flow: Aquaclear 70 and 800GPH wavemaker
Heating: Aquarium Co-op 100W Heater (Keeping the tank at around 74F since that's what the Aquarium of the Pacific is keeping theirs at)
Lighting: Clip on desk lamp

Lighting isn't required for an NPS Tank since they don't use light. I'm planning on using a small clip on desk lamp since I love the spotlight look and I'll only be running it for photos and viewing which should only be an hour or 2 a day.

I went with Pool Filter Sand since I've used it forever with my Freshwater Builds and I had a lot of it on hand so I decided to use it for this build as well. I mixed in some Caribsea Live Sand from the Macroalgae Tank to bring over some pods and to make it a look a bit more natural.

I designed the scape after Mike Mikina's 137, the two pillar look was very appealing and also looked like how you would find NPS corals in the wild. On the side of Seamounts and Cliffs that get a lot of flow in deeper water. I have the Aquaclear on the left to help blend in with the corner and the wavemaker on the right to cover any deadspot. From the top and some tests, it looks like I'm getting a lot of flow with this duo which is very exciting since heavy flow is essential from different angles.

Corals | At the time of posting this, I don't have any corals so far. Although I hope to change that soon since I'm waiting for some Black Friday / Cyber Monday deals at the end of the month. While I'll probably run out of space and won't have room for everything on the list, this is a list of what I'm hoping to get

The Tanks height doesn't allow for too many gorgs so depending on growth pattern and rate, I may be limited to 3 or 4 which is fine with me. I tried to make a spot on the sand bed connected to the scape that could fit a seafan so that it can grow pretty outwards. A lot of these will be hard to find since NPS don't have a big market in the US compared to Europe and Asia, along with different restrictions such as the Wire Corals. We'll see out of this list what I am able to find.

Fish: I plan on not having too many fish in here since the feeding for the Corals will already add a ton to the nutrients, however here are some ideas I have:
-Captive Bred Royal Gramma (I love the color)
-Pair of Bangaii Cardinals
-Swissguard or Swales Basslet (Although the scape might be improper for them, I might have to do some modifying)
-Black Cap Basslet
-School of Masked Carribean Gobies
That's really all I've come up with. I'd love to lean towards the deeper water fish since it is a deeper water tank such as the Black Cap and Lipropoma Basslets however I'm still undecided.

CUC and Inverts |
I'm mostly thinking of things like Micro Brittle Stars, Nassarius Snails, and maybe a Blood Red Fire Shrimp to help eat uneaten food. Skunk Cleaner Shrimp would be on the list but I'm worried about their reputation of taking the food right out Dendro and Sun Coral Mouths.

Feeding |
Sticking with the Tried and True Reef Nutrition Line of PhytoFeast, OysterFeast, RotiFeast, and ROE. I'd love to try PacPods since those are apparently good for NPS as well, and adding in TDO since while I've fed it to my fish and inverts, I never fed it to my Suns when I had them. Mysis will also be in the mix. I'm thinking of starting up a Live Phyto Culture as well which could be really helpful.

I do have plans to add a small Auto Feeder for RN Foods on the bottom since there's room on the stand, feeding it back up to the tank. Starting out with probably one or 2 small target feedings a day to get the tank used to the heavy feedings and while I only have a few corals, I think I'd like to feed the tank around 3 to 4 times a day. It'll vary depeding on what Gorgonians I get since those are usually the ones who eat most but so far the species I have on my list are good with 3 to 4 feedings a day which is doable for me.

And here we are, the end of the Intro but the start of an Amazing Journey! I can't wait to see how this tank evolves, maybe even make some new discoveries. I hope ya'll enjoy it as much as I will! 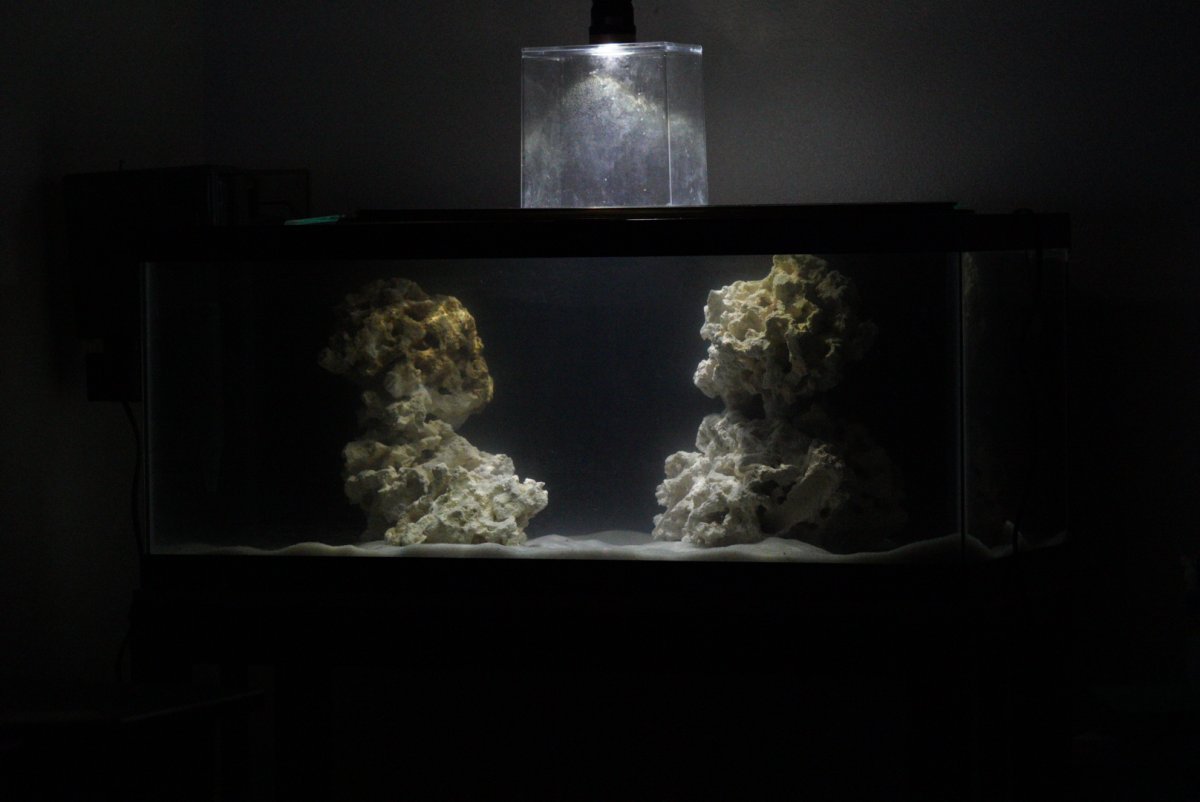 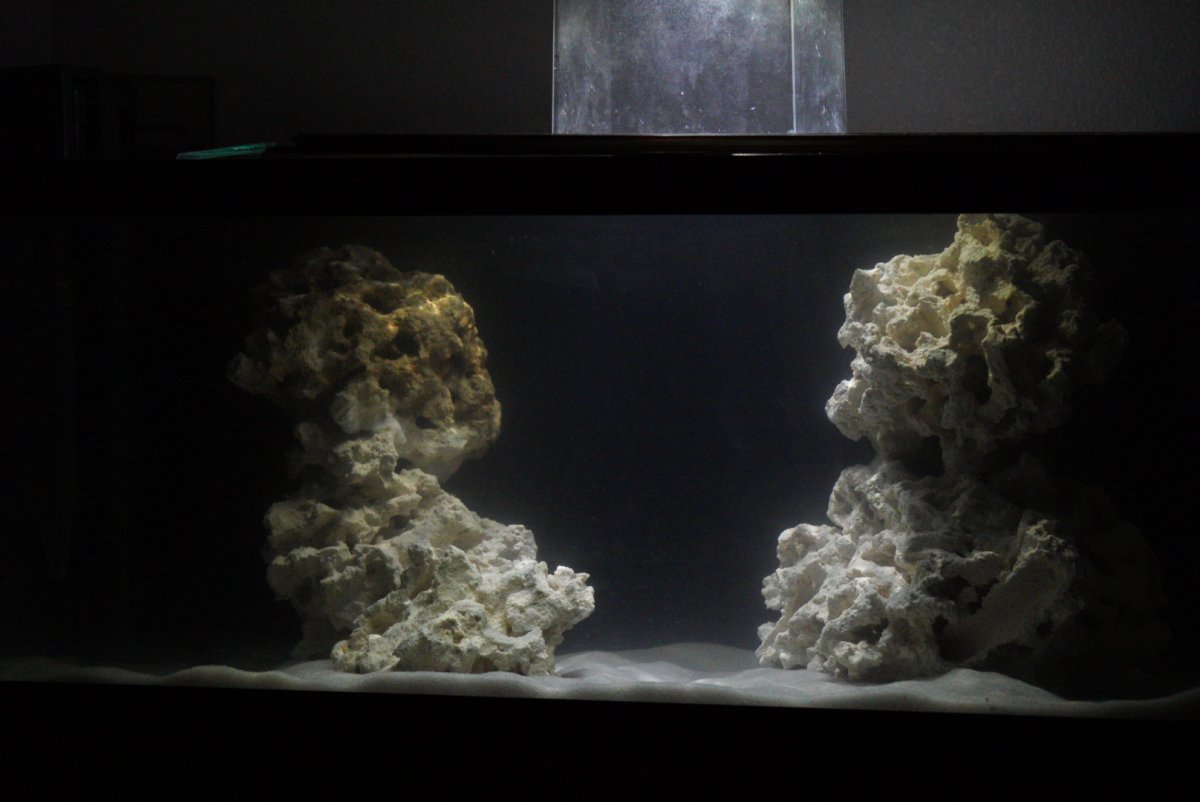 Rating - 0%
0   0   0
Putting this here so it doesn't get lost later on: The biggest thing I had trouble figuring out for this tank was the Temperature. Everyone knows you need a lot of flow, little to no light, and to feed a lot but no one really talks about Temp in the posts, threads, articles, etc I've seen for the most.
Since most of these corals are coming from deeper water, cooler water is where they're the happiest for a lot of species.
After talking with a friend who works at the Aquarium of the Pacific and some NPS Keepers in Europe, around 74F-75F seems to be the sweet spot. Especially with the Yellow Finger Gorgonian I saw from @Darksidereefing on Insta who keeps his tank at around 74.2F, it shows much more polyp extension and in general looks a lot happier.
Personally, I'm running the tank at 74.6F for now, and I'll see how it works out but I'm sure it'll be fine.
OP

Rating - 0%
0   0   0
What's up! Almost the weekend, I only have a few minor updates for this build:
-The Heater arrived a few days ago. It's the Aquarium Co-op 100W Heater and so far, it's another Win for an Aquarium Co-Op Product. The reading on the heater is almost identical to what the Inkbird is saying and the black cover is a bonus. I'm probably going to swap out the Heater on my Macroalgae tank for this one as well since I don't want the Sexy Shrimps, Gobies, and other little guys to burn themselves.
Still running the tank at 74.6F.
-Instead of buying a small clip-on desk lamp, I'm actually just going to use an old Nicrew G2+ I had in storage as the lighting for whenever I take pictures, videos, or for viewing. It looks pretty neat and should be dim enough to where it won't bother the corals but it's definitely bright enough to get good pictures and viewing.

Black Friday is next week and I know some stores like to start their sales early so I'm very excited to get the first couple corals in here soon! Luckily I haven't had any diatoms yet, I'm guessing that's mostly because this tank has received pretty much 0 light for the time it's been up.

Things are about to get awesome! 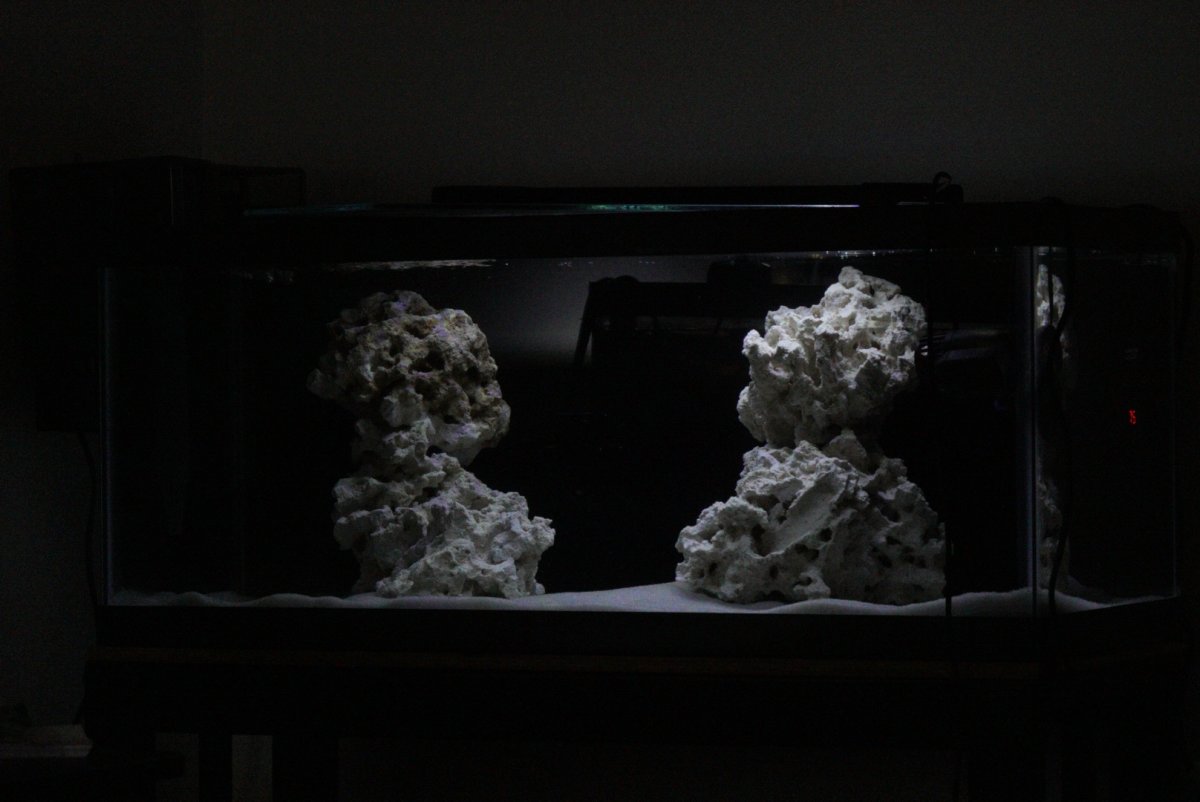 Rating - 0%
0   0   0
Getting back on the Youtube Content Grind so starting off is a bit of an Indepth tour of this tank. It covers pretty much everything I've talked about on this thread so far but with a couple more pictures. Going to start documenting some stuff on here again so follow along if you'd like!

Rating - 0%
0   0   0
Hey there!
Good to see more people trying NPS! I will be following your thread for sure and assist you if you have any questions.

I run the @darksidereefing channel on IG.

Gaufl said:
Hey there!
Good to see more people trying NPS! I will be following your thread for sure and assist you if you have any questions.

I run the @darksidereefing channel on IG.

Oh hey Flo! I've actually been following you on IG for a while, I love your build! It's actually one of the tanks that inspired this one, all the Gorgonians are so cool.
I'll probably reach out to you on IG about some species soon! Thanks for following! I

Rating - 0%
0   0   0
First Corals!
Yesterday I got in the First 2 (well, I ordered 2 but they sent 3) for the Tank! It was snowing pretty heavily unexpectedly yesterday but thankfully it didn't effect the corals. I got a Red Sea Fan (ID unknown but a friend is saying it might be a Leptogorgia sp. I need to ask for the location from the seller) and a Yellow Finger Gorgonian (Diodogorgia nodulifera). They actually also sent a similarly sized Red Finger Gorgonian (also D. nodulifera) unexpectedly as a freebie (perhaps they thought I ordered the bundle they have on the site although it's a welcome surprise).

These are from Seahorse Savvy which I totally recommend Alyssa's company thanks to this awesome first buyer expierence and I'll most likely get a couple others from her down the road since it's the only store I can find that brings in the rarer gorgs.

Both are doing well so far although it's only been a day of course. I have good expierence with the Fingers from past and Leptogorgia are an easier NPS species so that's a good thing to start out with for this tank. Both are getting double feedings of RN Phyto and OysterFeast so far and responding well. Glad to get this tank going! 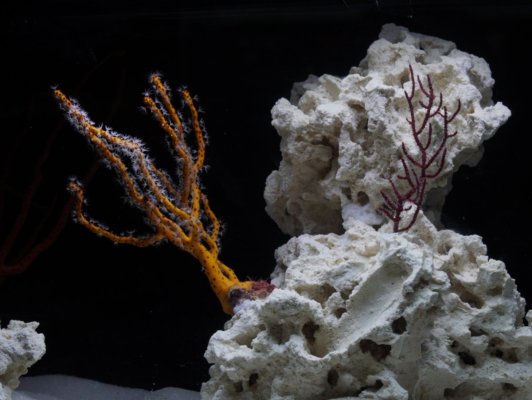 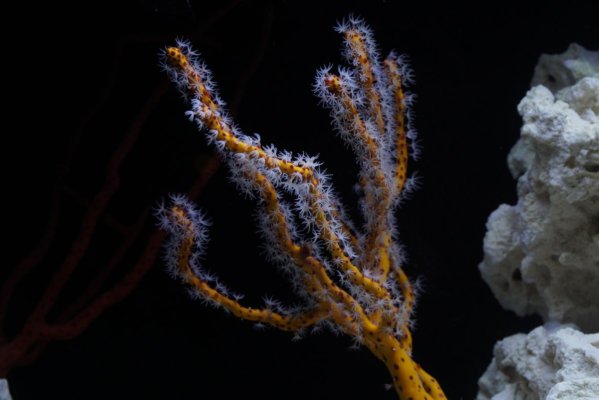 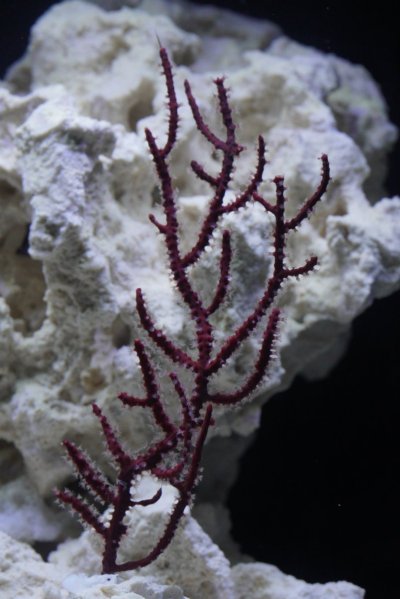 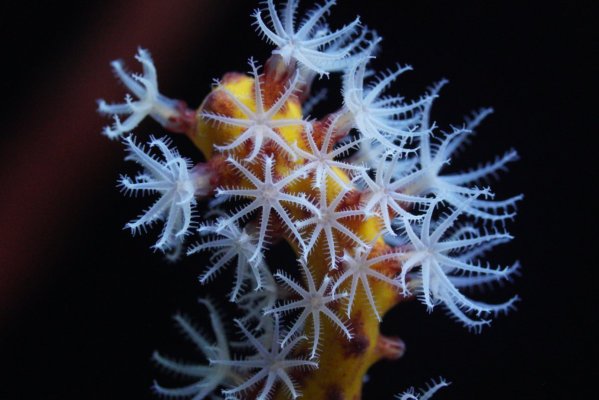 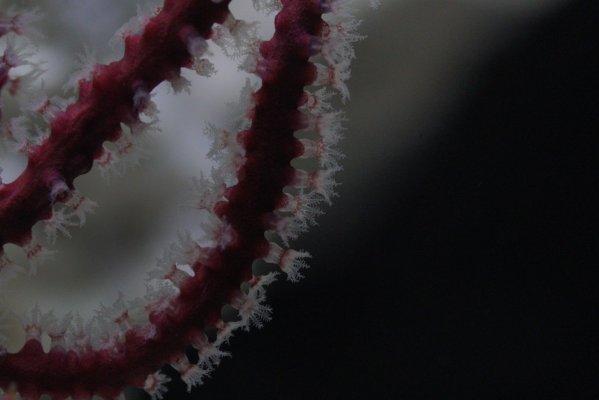 Temperature Range for an NPS Tank?

Is there a way to test a reef for ATP/NADPH in my water column?

Purple Anthogorgia, anyone keeping these?