I'm doing a tank transfer today due to seam dmg on old tank. @brandon429 - this may be right up your alley

I'll use this opportunity to rinse the sand which I know should be save to not crash to cycle. What if I peroxide my rockscape at the same time? I have some pretty bad valonia and gha that I've been spot treating but since I'll move the rocks out of tank I'm thinking of peroxide the entire rockwork. Is that going to kill my N cycle?

I still plan to use my old sump which currently has a sponge, skimmer and pump.

Also have some microbacter7 and seachem stability left

Agreed that's perfect, use the deconstruction time to clean out annoying pockets, catch up. I'm 100%sure it won't harm. And since there's a large work thread for crazy claims it'd be this one- using peroxide on rocks while the rest of the system is being sand rinsed. We never dipped rocks, nor dosed tank (mostly) so at least you can see how others turned out before beginning. Pls take pics of this job, lots of $ on the line!

What you are really in for: Hand cleaning, hard work siphon and rasp-removing of accumulations and invasions outside the tank and doing massive water changes is 90% of this thread, peroxide is 10%. We almost never dose peroxide into the tank water, this is a you-work-physically-hard as catch-up...

the bacteria end up weathering everything the prior rules said they couldn’t. All reefs, not just some. The key to success in the job as you mentioned is move zero waste, no detritus. Dont use the bottled additives


for many pages we didn’t use any there, and for fifty pages in the sand rinse thread. We dont doubt bacteria, is why we don’t use them. Two reasons we don’t use dosers or water preps is because we already know how to skip cycle without testing anything, ammonia is always controlled, and because using those items causes false positives on test kits which only creates more doubt. We are locked in above, no bottle bac needed.

Happy to report everything went well. I was shocked at how dirty the sand was, took 5 buckets to rinse clear.

The new tank was also 30G but "long" so needed more sand. I added 10 pounds of new Hawaii black to give it the oreo cookie look. Only casualties are

1) 2 accidental frags that i lost in the sand..probably buried somewhere. The main colonies are doing fine

2) my coral band shrimp lost a claw, presumably from when I moved the rocks to the Brute bin. Hoping they will grow back

3) a lot of bristle and spaghetti worms - i tweezers out about 30 of the big ones to reseed the new sand but most of them are lost in the rinse.

In terms of peroxide - I only ended up doing 2 of the 3 main rock pieces. The last one had some expensive acro frags that I didn't want to leave out of the water too long to do the peroxide. I will continue in tank spot treatment and will report progress in different post

I resumed my regular feeding sch the next day. Only noticeable difference is that film algae didn't appear in glass the next day and in fact, the glass remained clear even now.

places that I peroxide have algae turned white.

before and after pictures! 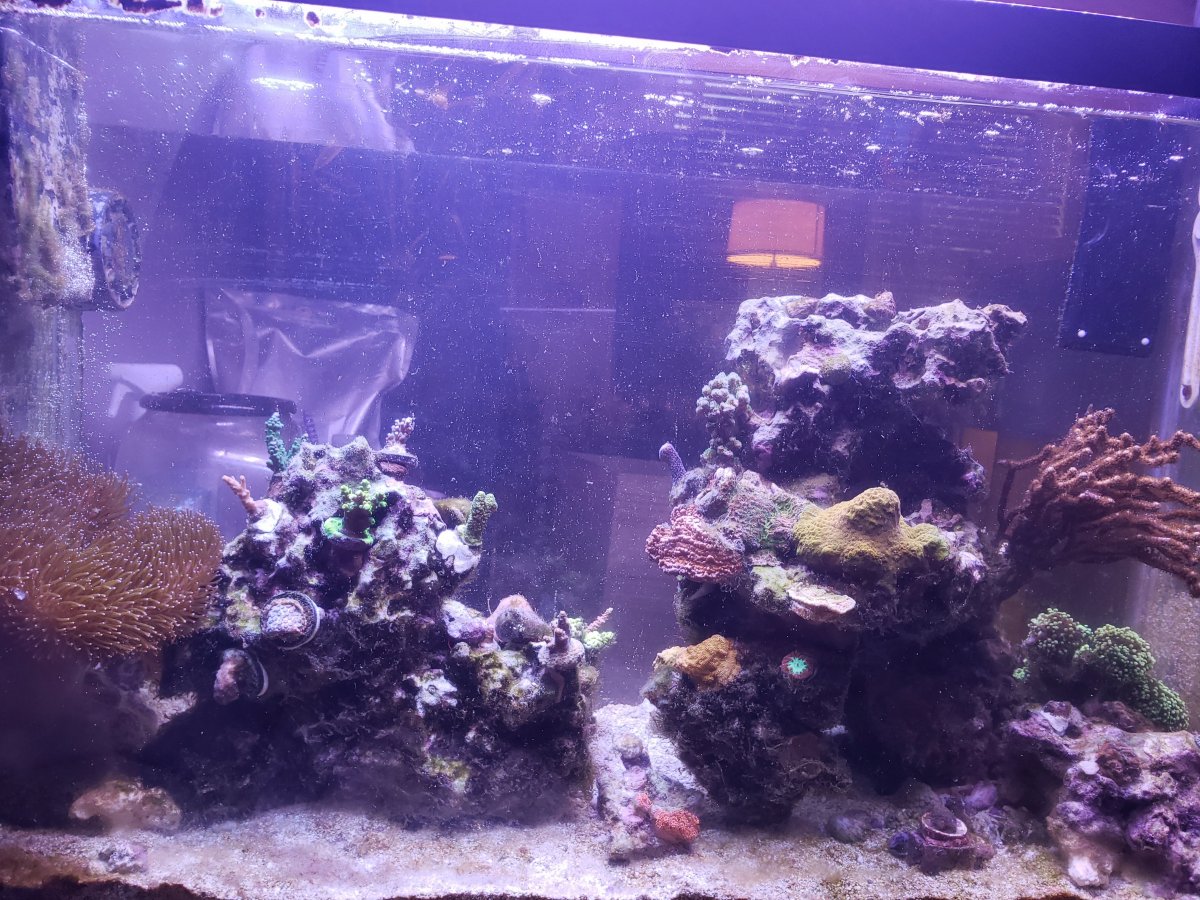 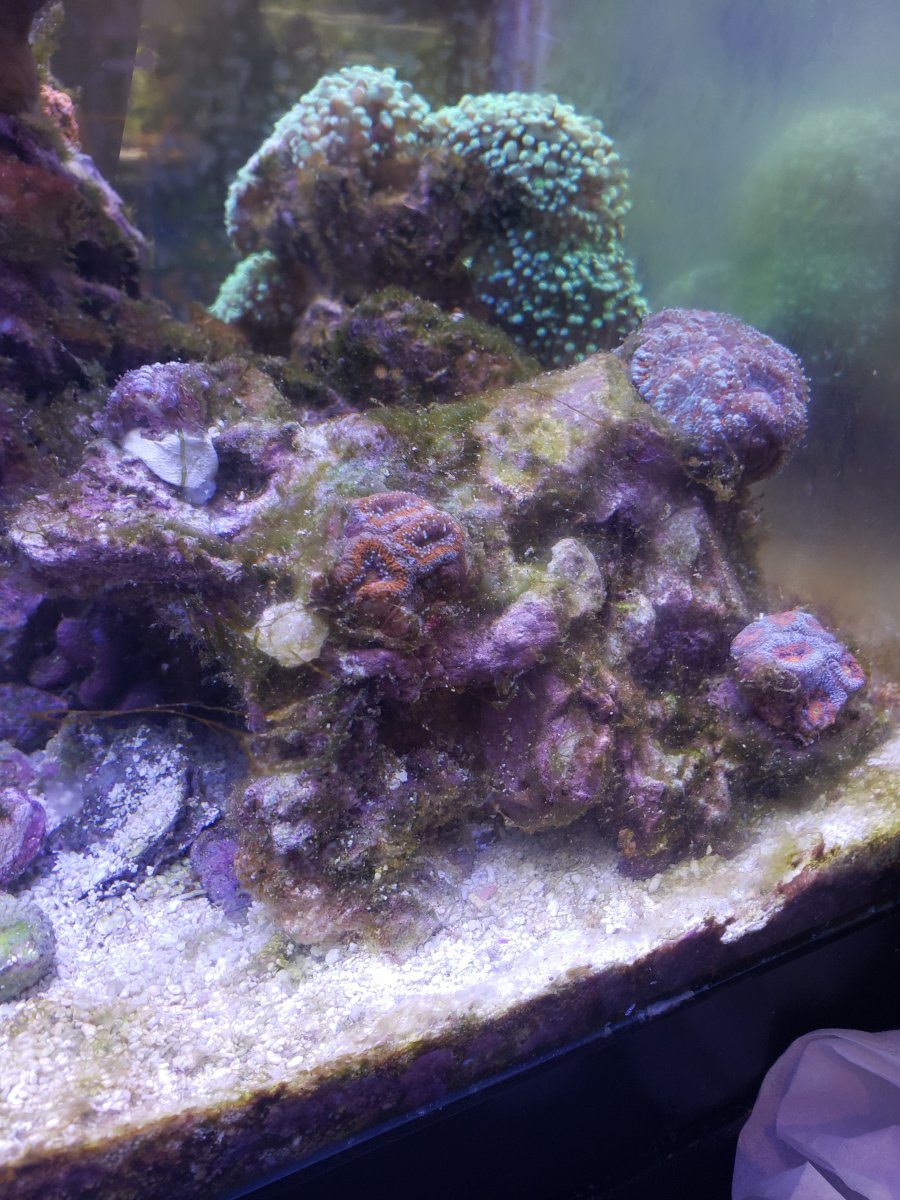 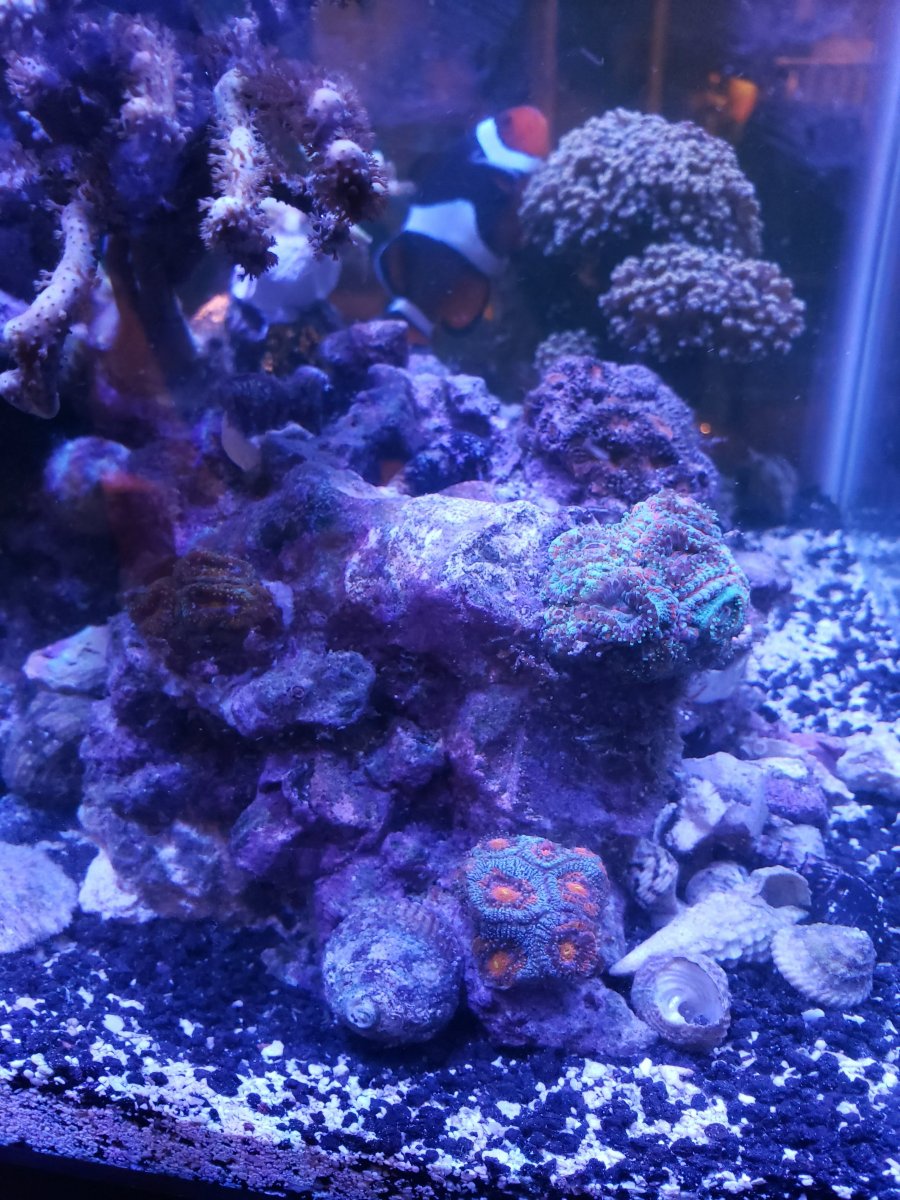 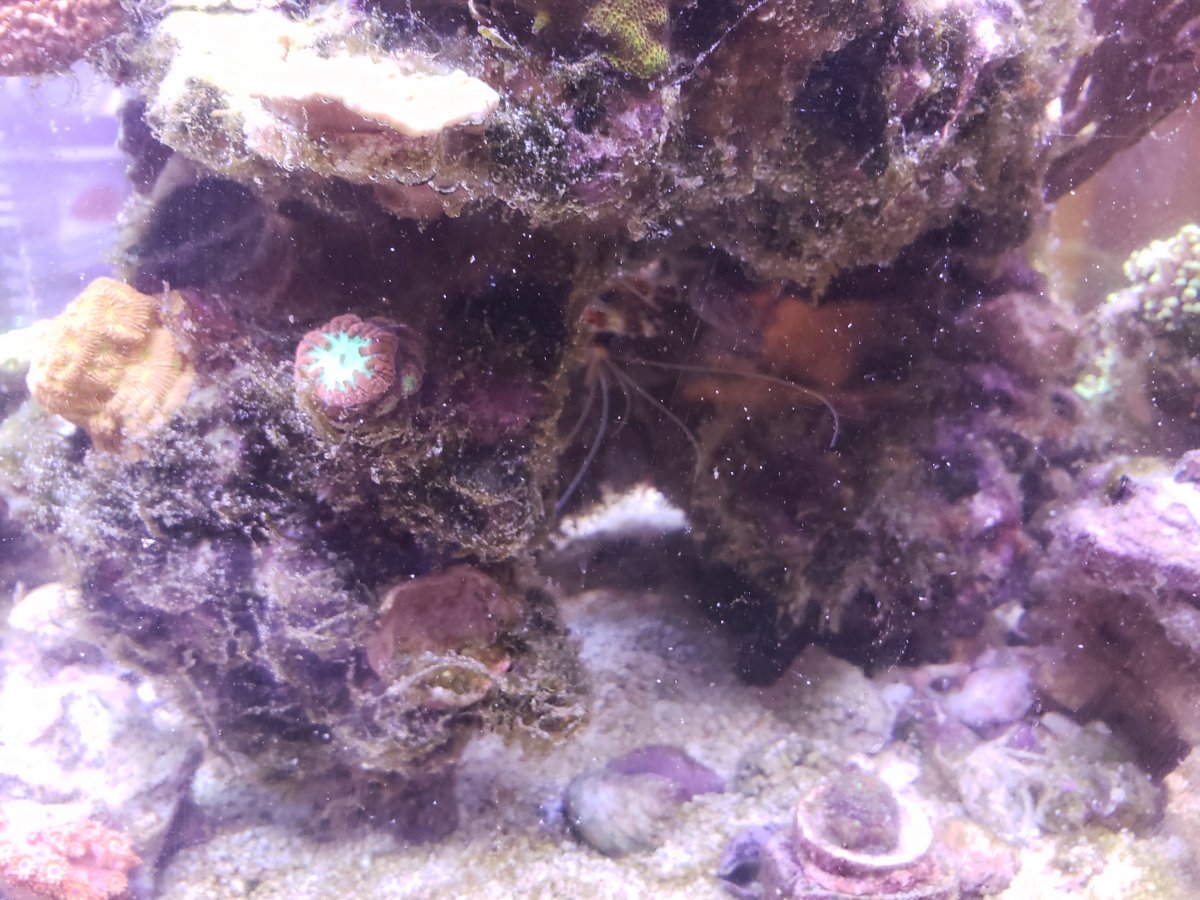 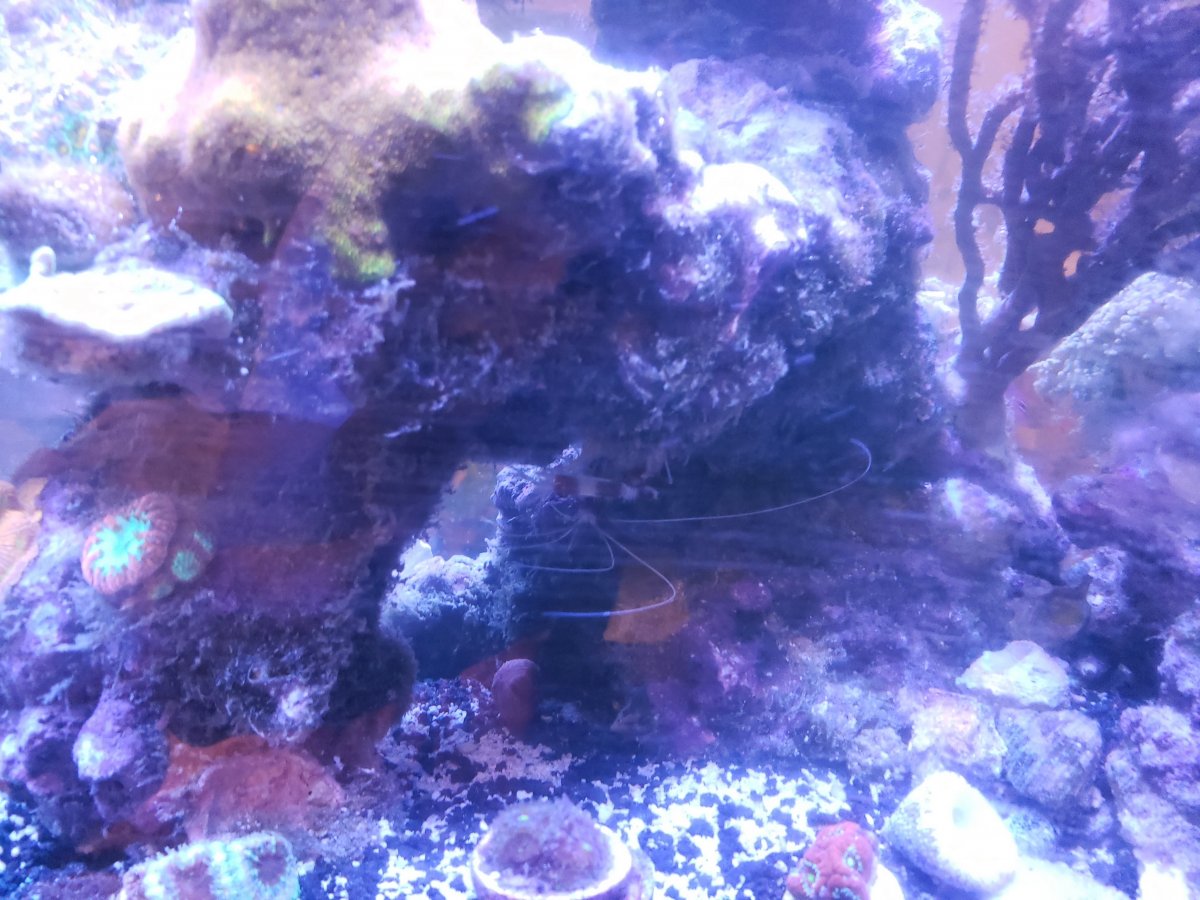 There are a lot more spots i treated but these so far showed biggest and fastest change in just 2 days.

So far everything look good. Interestingly, Params have not changed much from pre-move which goes to show you how "tip of the iceberg" those no3 and po4 numbers really mean for nutrient and algae control.

Well done! Just curious what do you have for cuc? I added 3 trochus and 8 cerith snails that got rid of my algae issues (20g tank)

Nick Steele said:
Well done! Just curious what do you have for cuc? I added 3 trochus and 8 cerith snails that got rid of my algae issues (20g tank)
Click to expand...

My issue it that its a mature system with very large fish bioload so it fertilizes both fast coral growth and fast algae growth. Params has been constant at 1 ppm no3 and 0.02 ppm po4. Algae used to be more under control bc I had a successful fuge but had to take it offline to use vibrant to combat a type bubble algae that the non of my cuc touched. After a few months of vibrant the system became unstable and it seems that it can't kill them fast enough to keep pace with new growth. "Feeding less" wasn't a option bc it led to dinos that I just finished dealing with by UV. So now I'm left with this algae problem that the cuc can't keep up with.

Tried restarted fuge but qt that point it could not outcompete DT (which also upgraded lights for the SPS) so new chaeto ended up melting.

I'm hopeful that the sand rinse will help bc I had no idea how much gunk was in there that im assuming was part of the algae fuel. Also started dosing live phyto home brewed to out compete.

B
Redoing my ugly aquascape for NSA