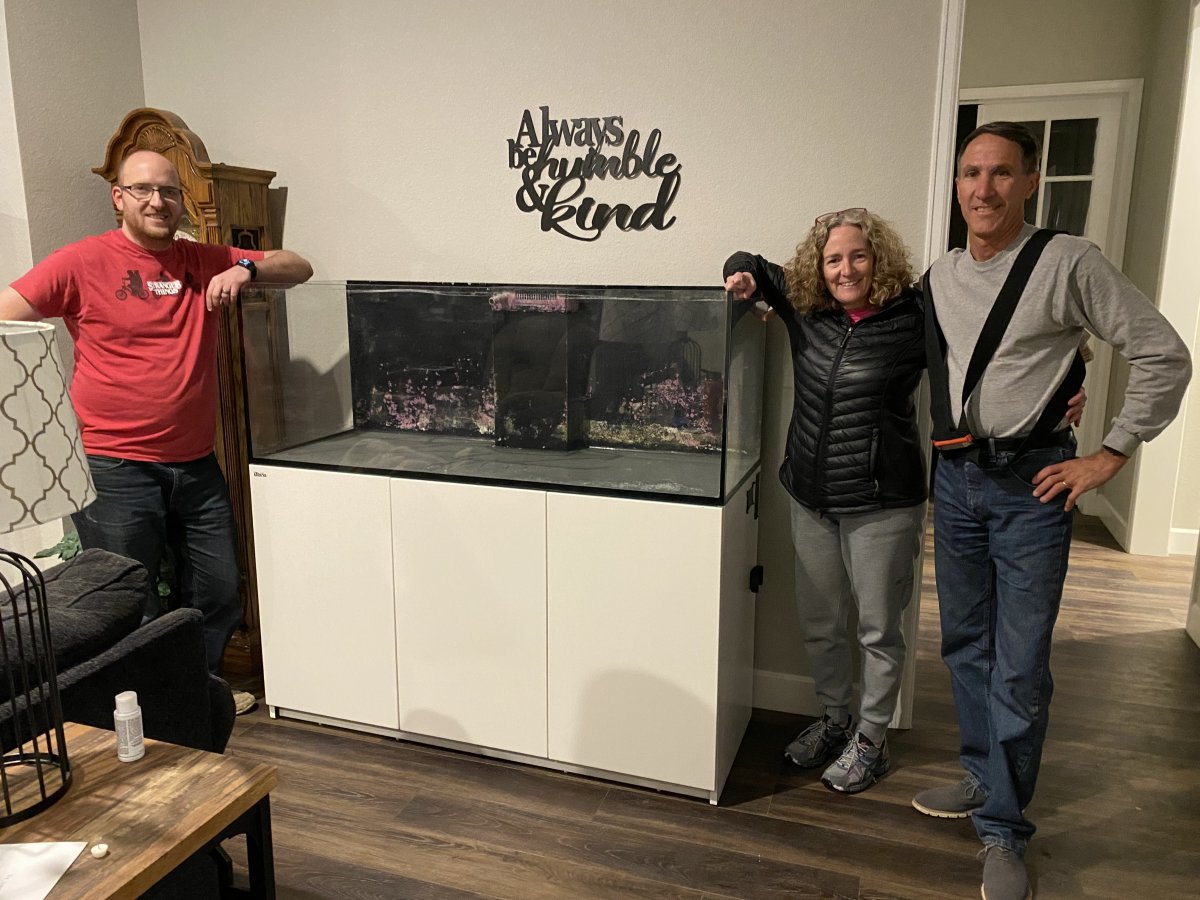 Found a great deal from a local reefer - who after moving, decided not to set up his tank again. Got the tank, stand, sump, and Vortech M1 pump for $1500. I think that's a good deal . But even it it wasn't - I'm so excited.

A little back story - my daughter has been a reefer for a long time, and has a beautiful Waterbox 220 in her study. For Mother's Day, she bought me a Biocube 32 and got it up and running with live rock, water, and other stuff from her tank. I've really enjoyed the maintenance and problem solving that comes with a Nano tank (currently learning all about Dino's). A couple of days ago, she sent me the link to the tank in the picture, and the bug bit hard! Needless to say, we came home with the tank about an hour ago. The tank is in great shape. I need to clean it up a bit (anyone know how to remove Coraline algae from the back wall)? My daughter is planning on coming over tomorrow to help plumb it up! I've got LOTS of decisions to make......lights, skimmer, and all the things I haven't even considered yet - as this happened so fast. I just wanted to get my initial excitement recorded . Wish me luck!
Last edited: Dec 12, 2020

Congratulations and following to watch you fill it up!
OP

Ok.... System is set up and plumbed. Aquascaping starts tomorrow .

So far, I'v purchased the following:

I will get Salt and RODI water from my daughter - she has a neat system set up in her garage, and lives less than a mile away. I know....lugging water sucks....but for now, the cheap option is the best! I bought her some salt, and watch her kiddos (which I love) to help pay for my water

Still struggling with what type, and how many LED's.....Would love to hear some opinions!
OP

Update - Jan 1 2020 - Tank is 'cycled'....according to the chemistry - so two yellow tail damsels, and a cleaner shrimp were added (per LFS recommendations). I will leave them as the sole inhabitants for several weeks while I quarantine the first fish on my draft stock list. Plan is to add my peaceful fish first (not sure if the damsels will stay), then the semi-aggressive, then my tangs. Here is my draft fish list:

I have set up the observation tank - quickly cycled with sponge filter I've been storing in the back of my 32 gallon...and have purchased the Cardinals, flasher wrasse, and a sleeper gold head goby (wasn't in the plan, but he called out to me from the holding tank!). Everyone is doing great, and eating well. Plan is to observe them for 3-4 weeks, and then add them together. When they are in the tank I will purchase the semi- aggressive fish and observe .....then tang....

I want to leave room for utilitarian fish as needed.

Skimmer is up and running - and still breaking in. I'm testing to see what setting and water level work best. 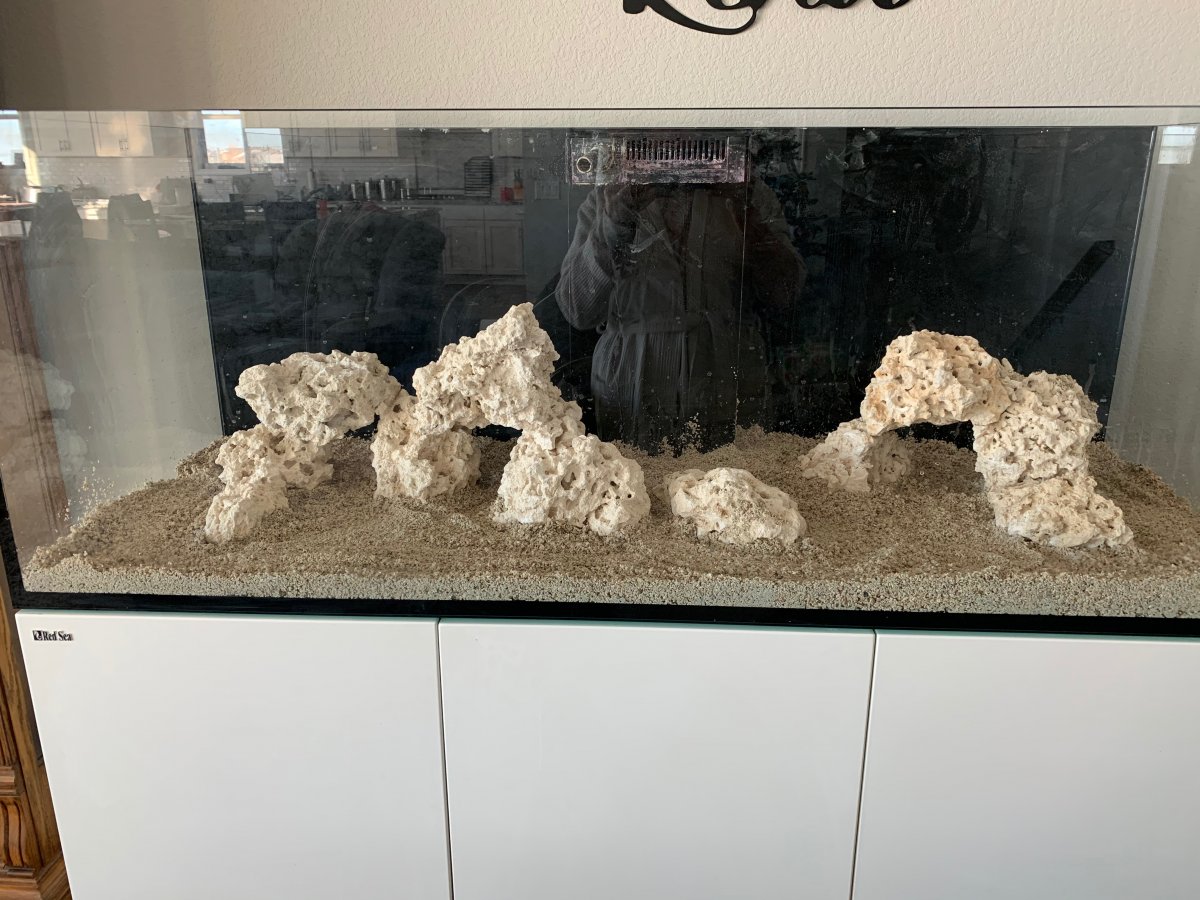 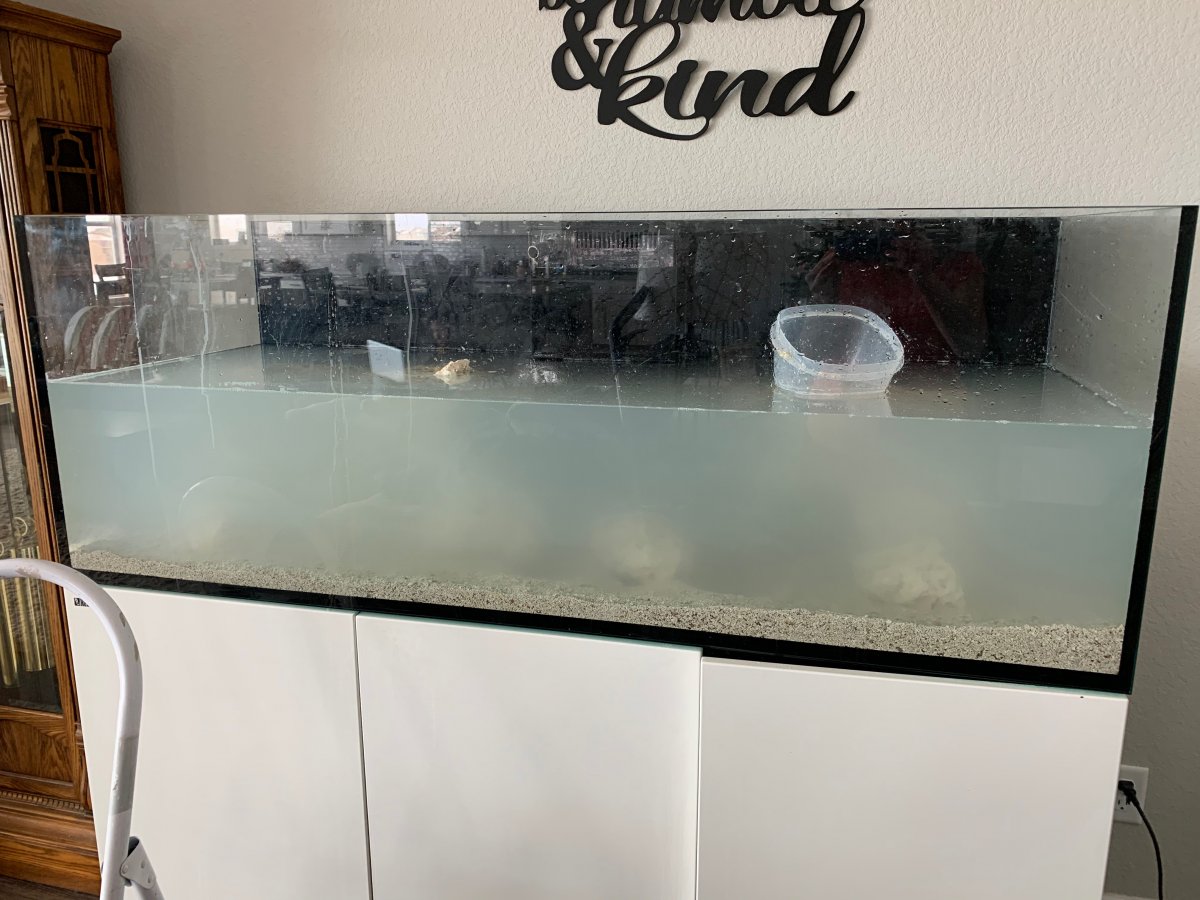 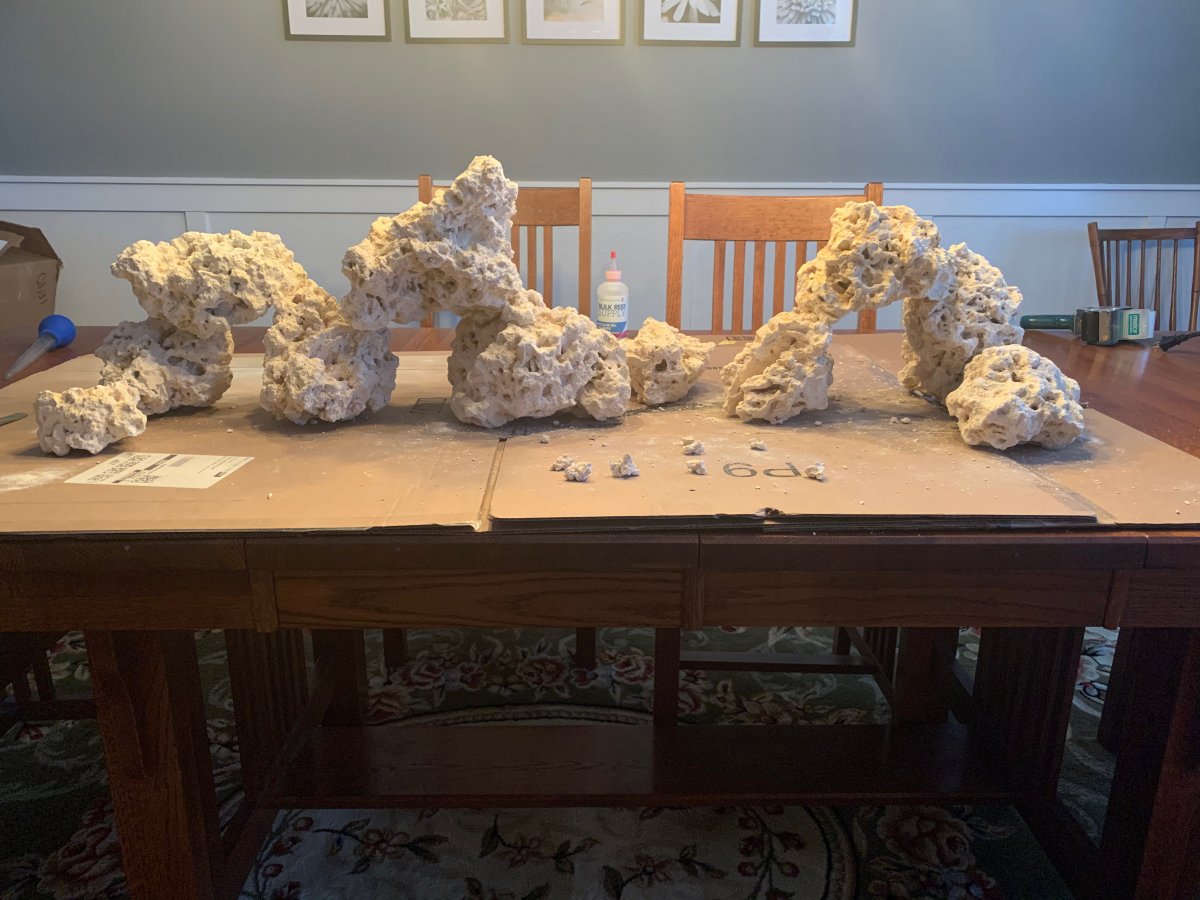 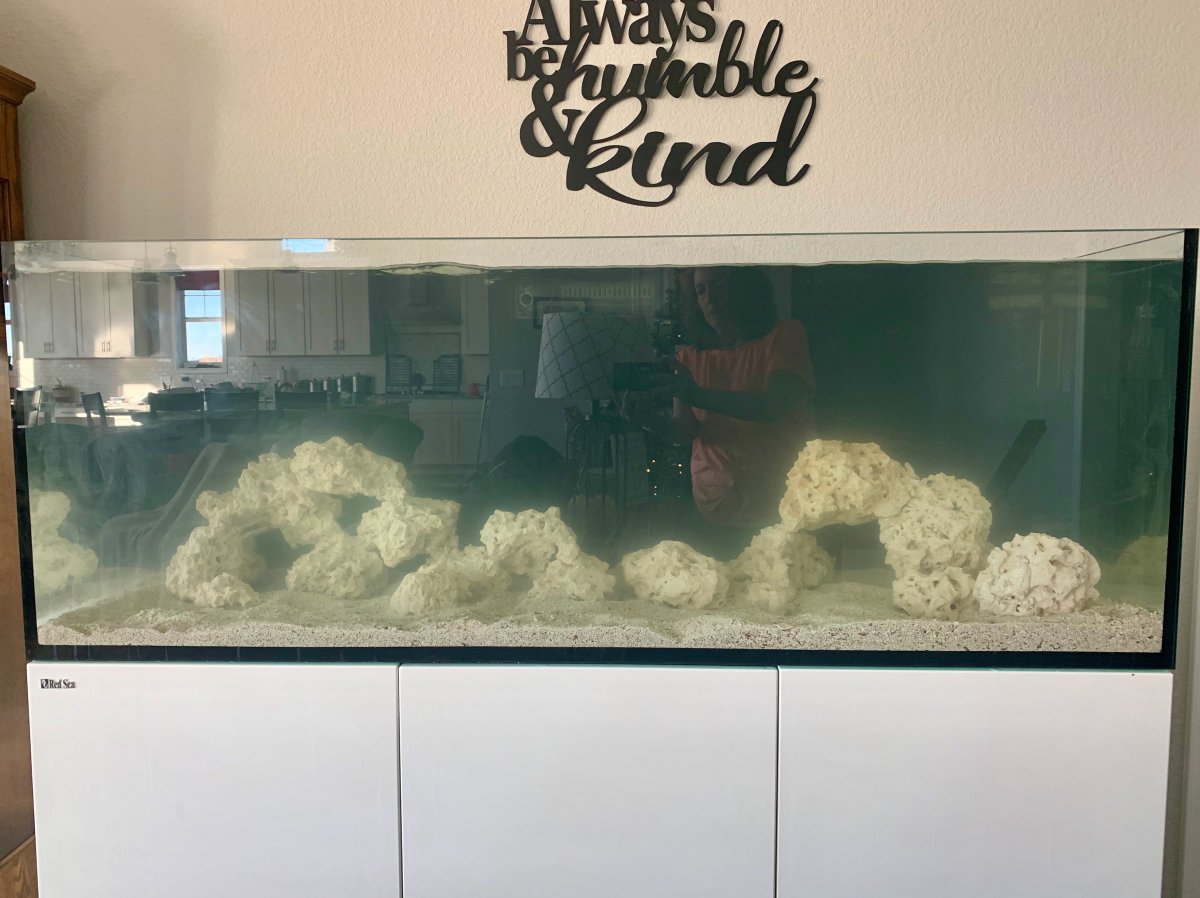 Rock work looks good. Saw some of your other threads. Hopefully everything is running smooth. Love yellow tail damsels. Keep us updated

Rock work looks good. Saw some of your other threads. Hopefully everything is running smooth. Love yellow tail damsels. Keep us updated
Click to expand...

Everything is still going great! Thanks for checking in......Now my Biocube 32.....that's another story....still battling dinos, but I'm starting to see some improvement. Luckily all my fish and corals in that tank don't seem to be bothered.
OP

Bought - received - and installed 3 AI Hydra 32's.....and 2 MP40s.....and a Inkbird controller. Skimmer is dialed in and pulling gross stuff out. Damsels have both settled into their own little territories on opposite sides of the tank. Cleaner shrimp is everywhere and begging for food every time I walk by. All 5 hermits are still alive, and trying on different shells for size.

The observation tank update: the smallest Bangai cardinal didn't make it. I could never find a food he would eat....so I think he just gave up. The larger bangai is doing fine and growing. The gobi took the leap of death - he found the one small hole by the HOB filter, and I found his shriveled body next to the desk. The fairy wrasse, long nose hawk fish and the purple fire fish are doing fine - looking great - swimming great - and no signs of disease so far. I will probably observe for one more week, and then transition them into the tank.

I'm keeping the lights off for now....and maybe for the next 3 months to keep the ugly stage at bay.

Your aquascape looks really good! I'm looking forward to following this build and watching it come to life. I, too, won't be turning on my lights for awhile to avoid the ugly stage for now and let the bacteria claim as much surface as possible. Are you going to seed this tank with any coralline algae from your previous tank or your daughter's tank?
OP

Added some more fish...My Tang Gang....wanted to add them all at once to reduce aggression.
I bought them from a local fish store that quarantines.....and I had them on hold for about two weeks after they were released from quarantine to allow my tank to settle a little more.

Added were: 1 Power Brown, 1 Sailfin, 1yellow, and 1 Scopas - all approximately the same size. They've been in for about two weeks, and look fat and happy. Most are getting along - except my yellow does occasionally pick on the Scopas. I don't see any signs of stress with the Scopas, but I will keep my eye on him. They each have their own cave, and often swim in a group which is fun to watch. I also purchased (after quarantine) a diamond Goby....He is a workhorse and probably one of my favorite fish in the tank.

In my QT tank now I have 3 wrasses (Lubbock fairy, blue sided, and melanarus), and a long nose hawkfish. I will keep them there for another 4-5 weeks, as I'm not pre-medicating. They are eating well, and bury themselves in the sand bowl at night.

Tank went through the diatom stage - and the rocks got UGLY! Forgot to take a picture.....Now, most of the diatoms are gone, and there is some green coloring appearing at the top of the rocks. I assume this is some sort of algae, and another stage of ugly. When the brown algae appeared, I added a small clean up crew. 2 Turbo snails, a small conch, and 5 astrea snails. They went right to work on the back glass, sand, and rocks.

Still haven't added any corals - although my husband is pushing for them. I did buy a few (torch, Duncan, and a couple or zoas), that I'm storing in my biocube while I'm waiting for the 525 to be ready.

I take more pictures later - once the lights come on.
OP

Well.....My Nitrates have climbed and my PO4 has dropped. Some of my corals do not look too happy. After reading a similar situation thread - I've started slowly dosing PO4. I will test every couple of days to see if I can get my current level of 0, to .03 and holding steady. I'm hoping this will help my Nitrate level fall, and my corals to brighten up.

If it's not one thing....its another - but I still enjoy the learning!