Reef to Plants and Back Again

I have had aquariums of one sort or another for about 40 years, starting with my little Tetra 10 gallon. Other than a couple years in the dorms in college there has always been an aquarium in my life. Eventually I tried saltwater, and went from FO to FOWLR to a full mixed reef.

Then I decided to switch out the live rock for something different, and got a bunch of shelf rock from Fiji (when you could still do that) and rebuilt the whole aquascape to start fresh.

That was a mistake.

That rock was infested with aiptasia, and at the time, the go-to was Joes Juice. Nobody told me about any other options, and it just got worse and worse until I gave up, sold all the contents, and converted it to a 120 gallon planted tank.

Then we moved to another state and I sold the whole thing, and bought a 65 gallon at the new house as a normal freshwater tank.

Then we moved to Kansas City, and I fell in love with a Waterbox tank at a LFS, and the journey began.

I wasn't really thinking about timeline photos when I started, so I only started taking pictures a few months in.

So we'll see how it goes. 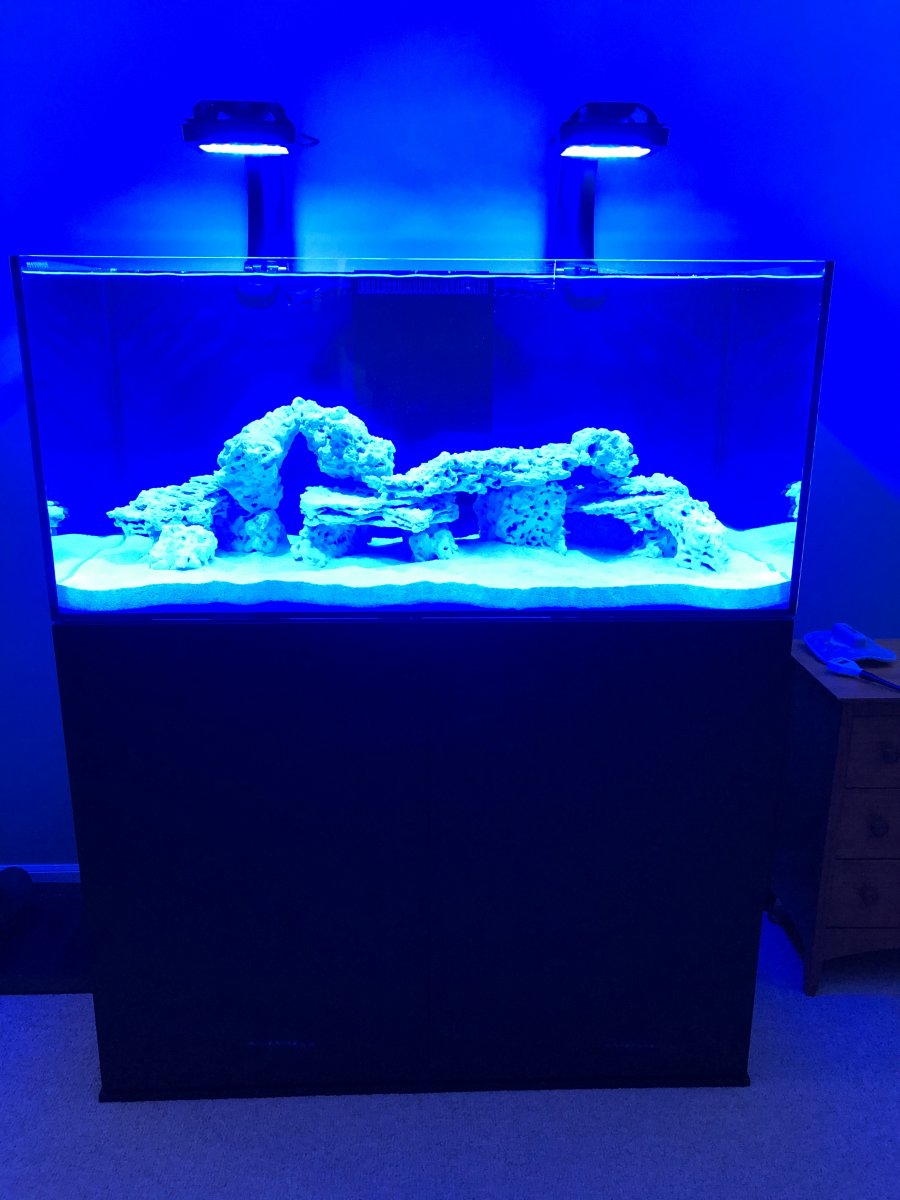 And the sump, prior to any fancy stuff. Even had water bottles as a manual ATO in there. 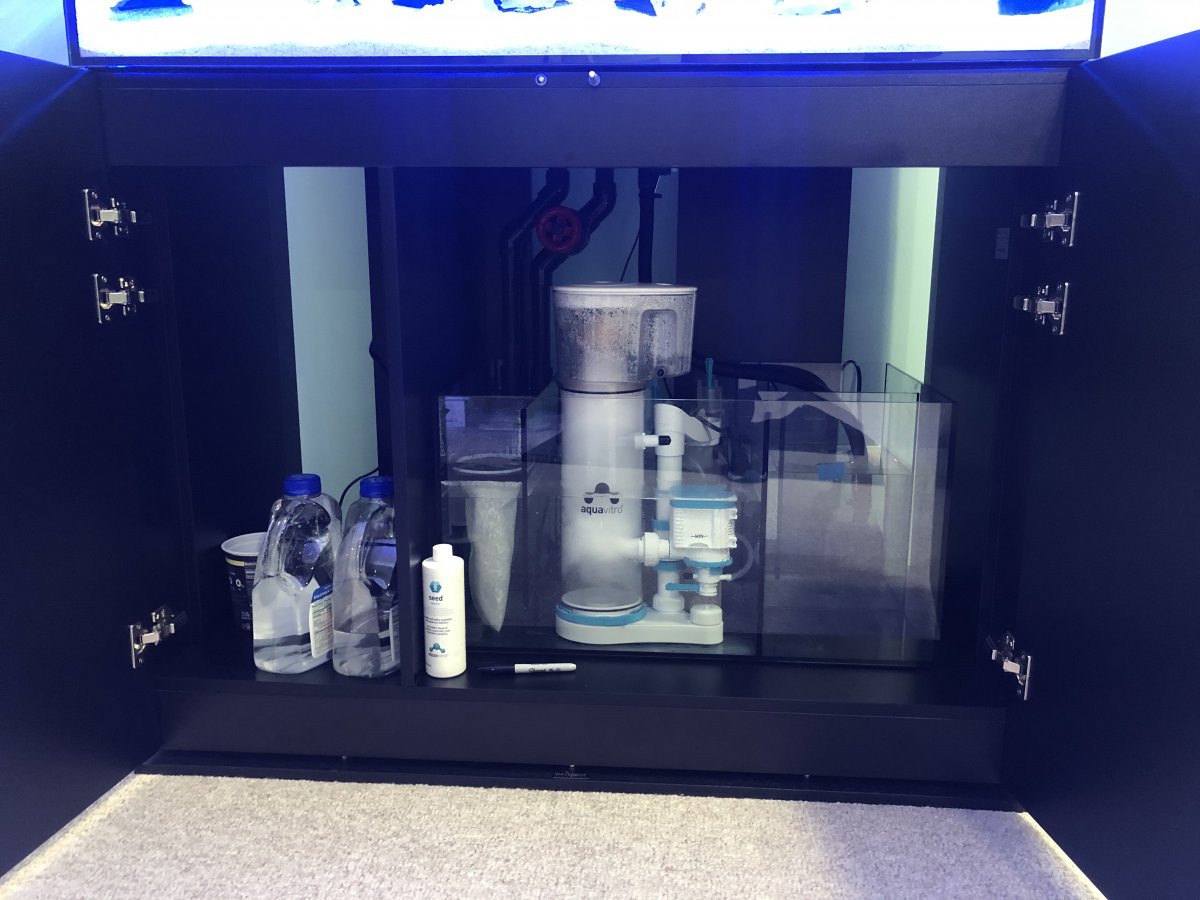 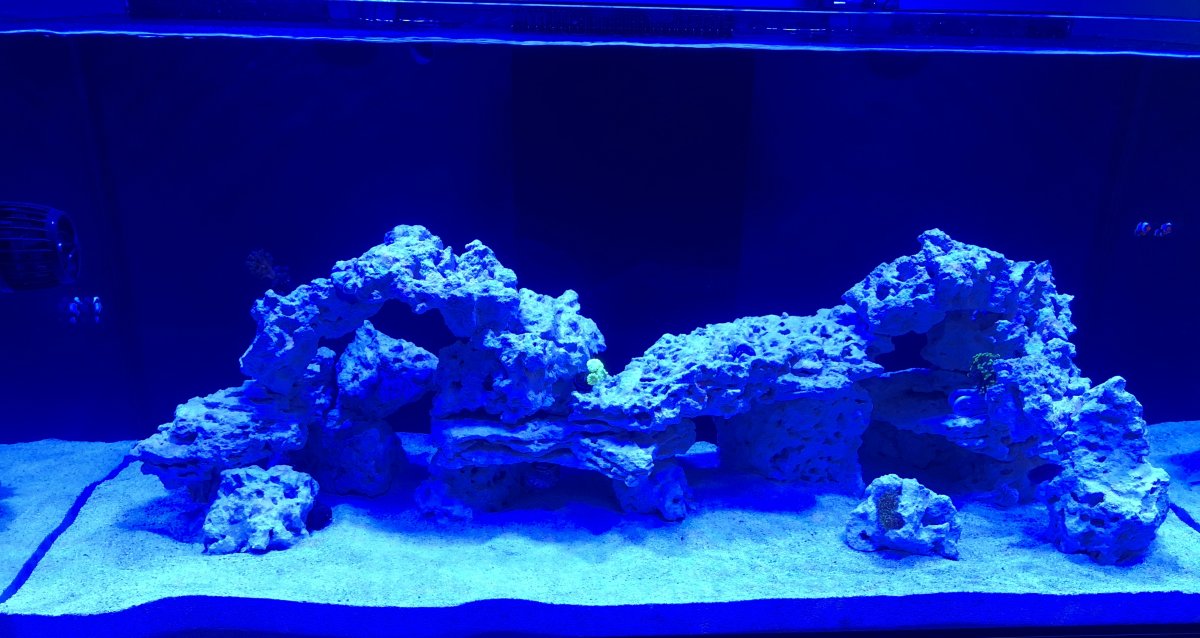 Was able to catch and remove the wrass after 3 days, and then we added the filefish back. Then it vanished. Sadly, it went through the weir teeth of the overflow, then got stuck in the basket in there and died. We felt awful.

We've added a few more frags, as well as some cardinal fish and anthias. 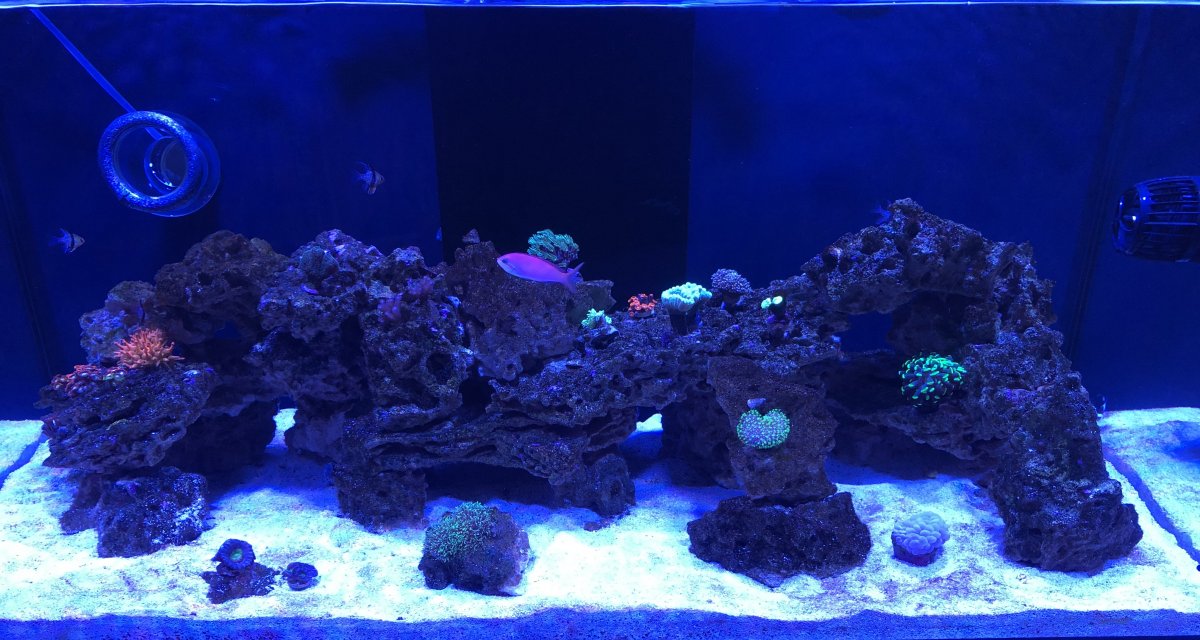 I had never used a quarantine tank before, and now I'm paying the price. We left town for a few days after adding the cardinalfish, and when we came back, almost everything else in the tank was dead, there was a thick coat of algae on the glass, and we didn't know what to do.

That's about the time I joined R2R and started asking questions, and was told the only solution was to QT the remaining fish to treat them, and let the tank sit fallow for 74 days. So this is the tank now with no fish.

Now we wait for December 14th to arrive and hope things get better. 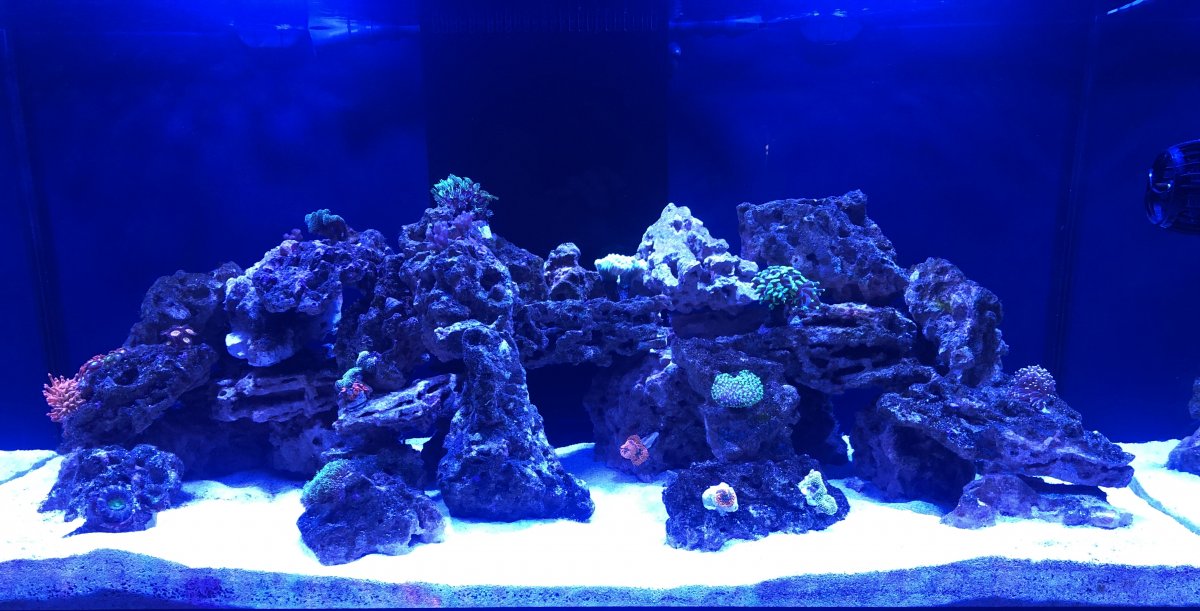 The Pentair UV is about 48" long, way too big to go inside the cabinet, so it is going to be mounted outside on the wall.

Here's the first of several "oops, forgot that" shipments of stuff... 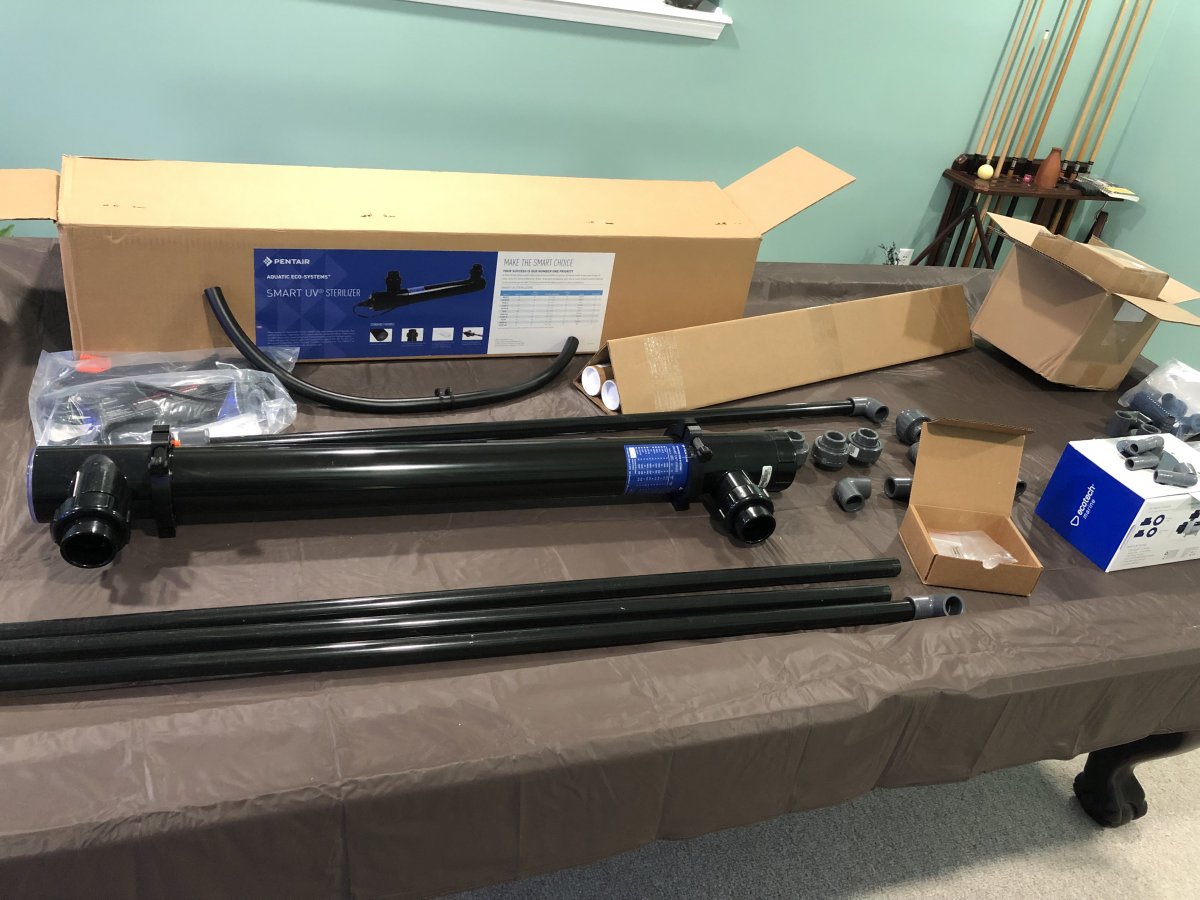 Since I'm mounting it vertically, it really needs horizontal boards to screw into. So I cut two holes in the wall to create that. 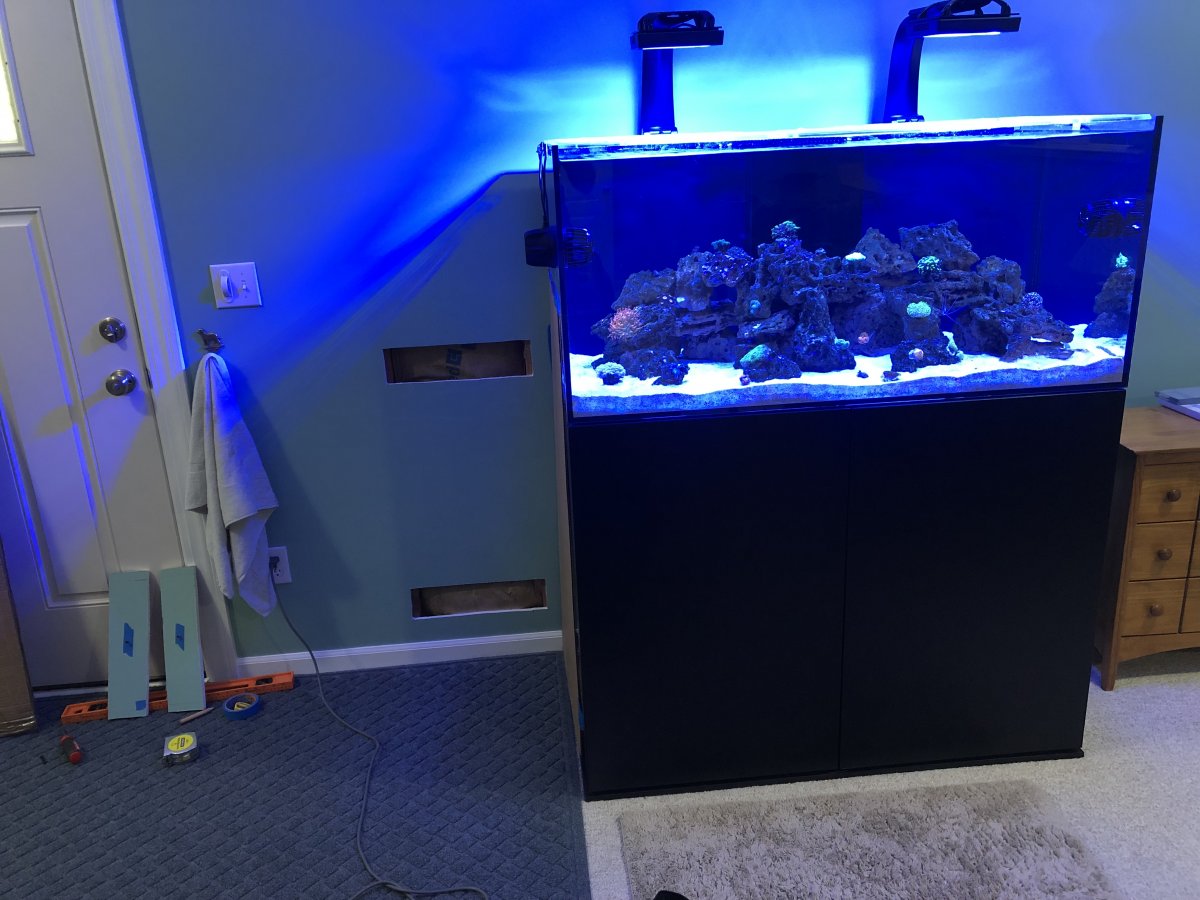 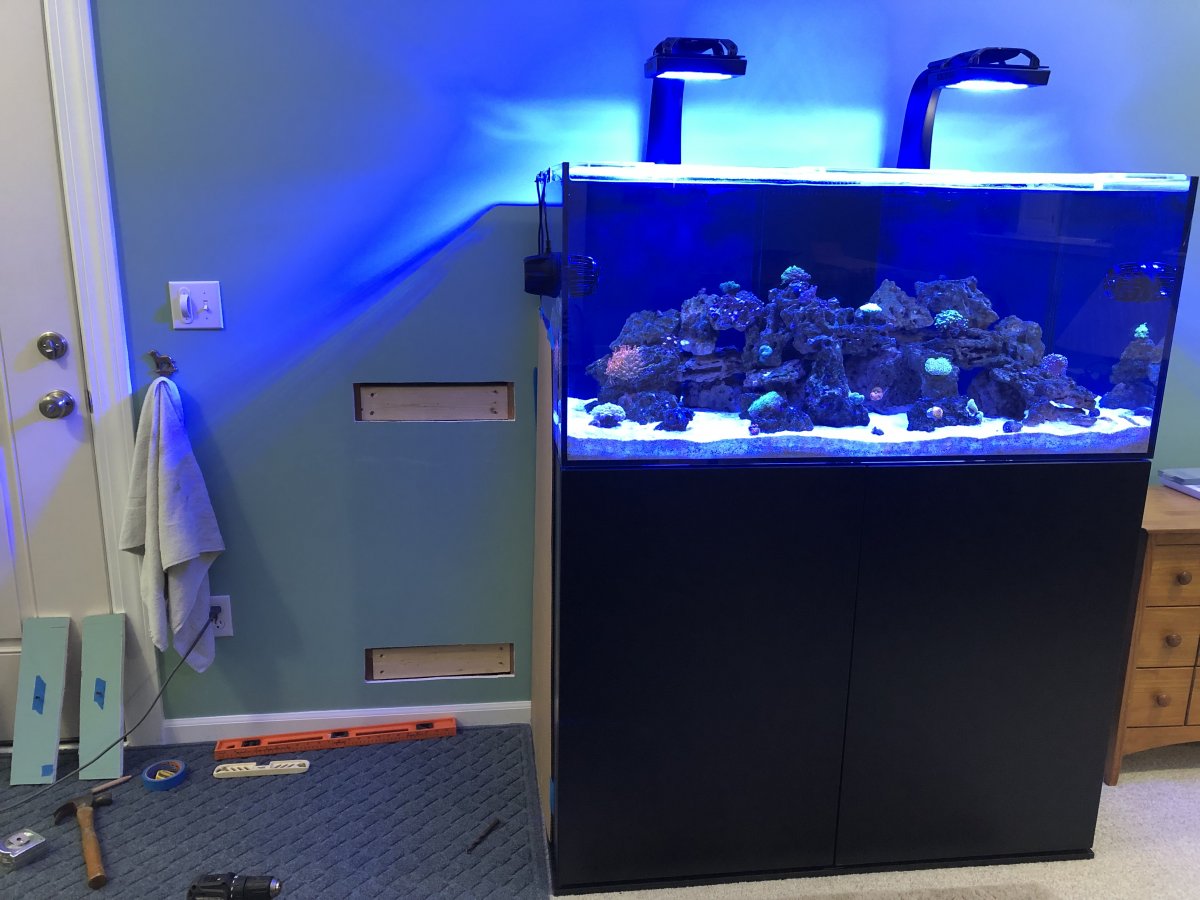 Replace the drywall and spackle... 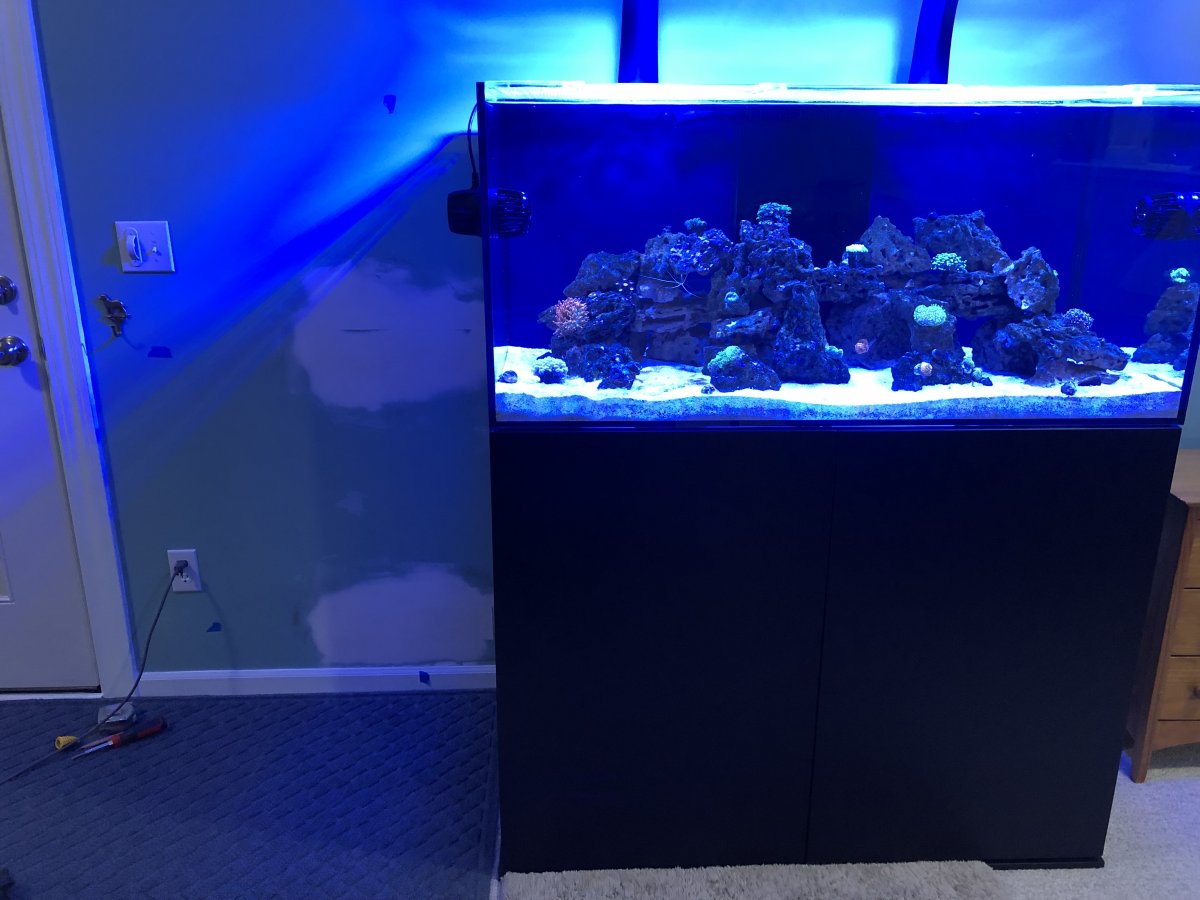 And it's up and running.

I used a Vectra S2 for a pump, which is overkill. I expected a lot more head pressure. Even dialed down to 5% it's way too fast for the protozoa kill gph flow rate, which I calculated to be pushing 1 gallon of water in 18 seconds. So I'm glad I added the gate valves so I could restrict the output and get it where I needed it.

Two weeks after the install, the tank is freakishly crystal clear. 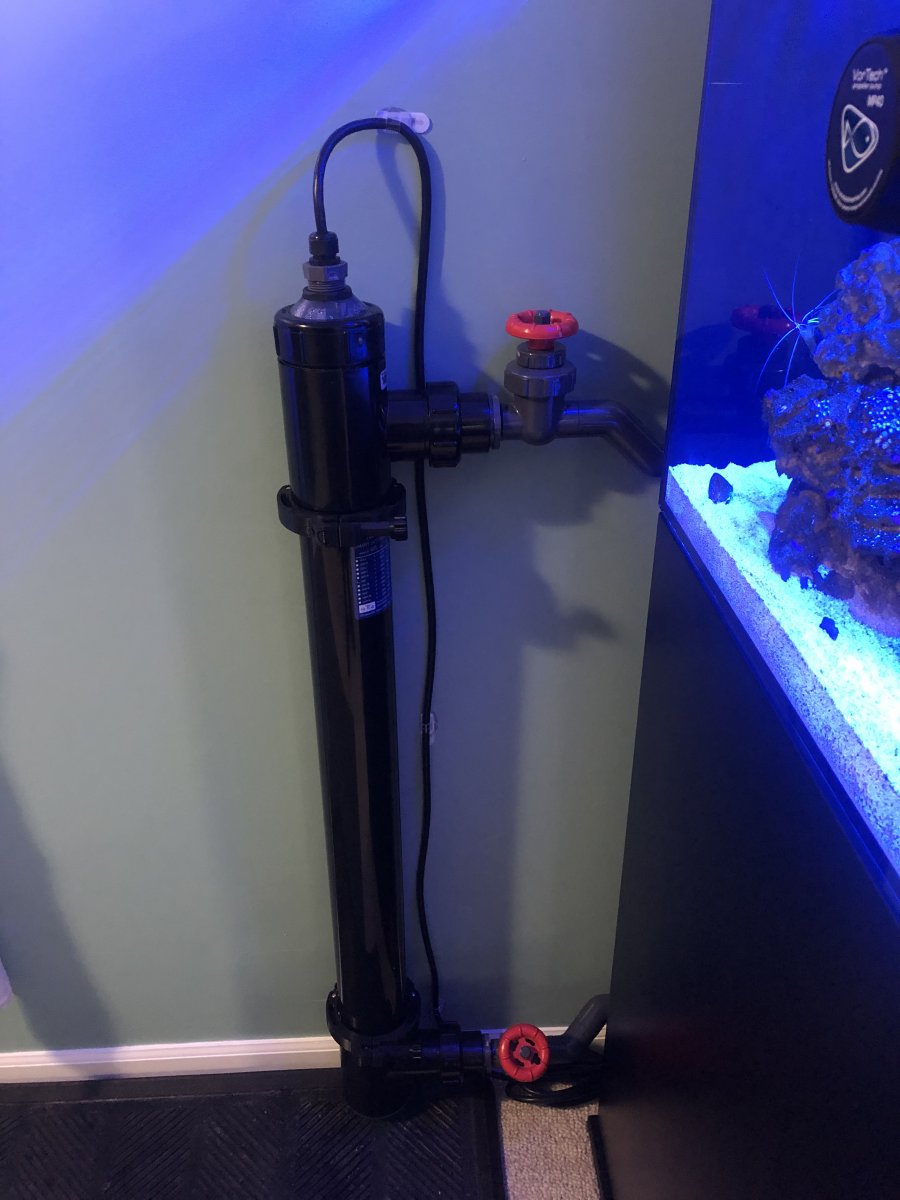 Have this model and love it.

The Pentair UV is about 48" long, way too big to go inside the cabinet, so it is going to be mounted outside on the wall.

Here's the first of several "oops, forgot that" shipments of stuff...

You need to upload your videos to YouTube first. Then share/copy link here sadly you can not just share videos from phone.
OP

12/01/2021
I finally remember that I had one of those Orphek lens sets, and boy does that let the photo show true colors.

So here's where I'm at as of today. Two more weeks before fish can go back in!

Hopefully I can keep this thread current, just in case anyone actually looks at it besides me. 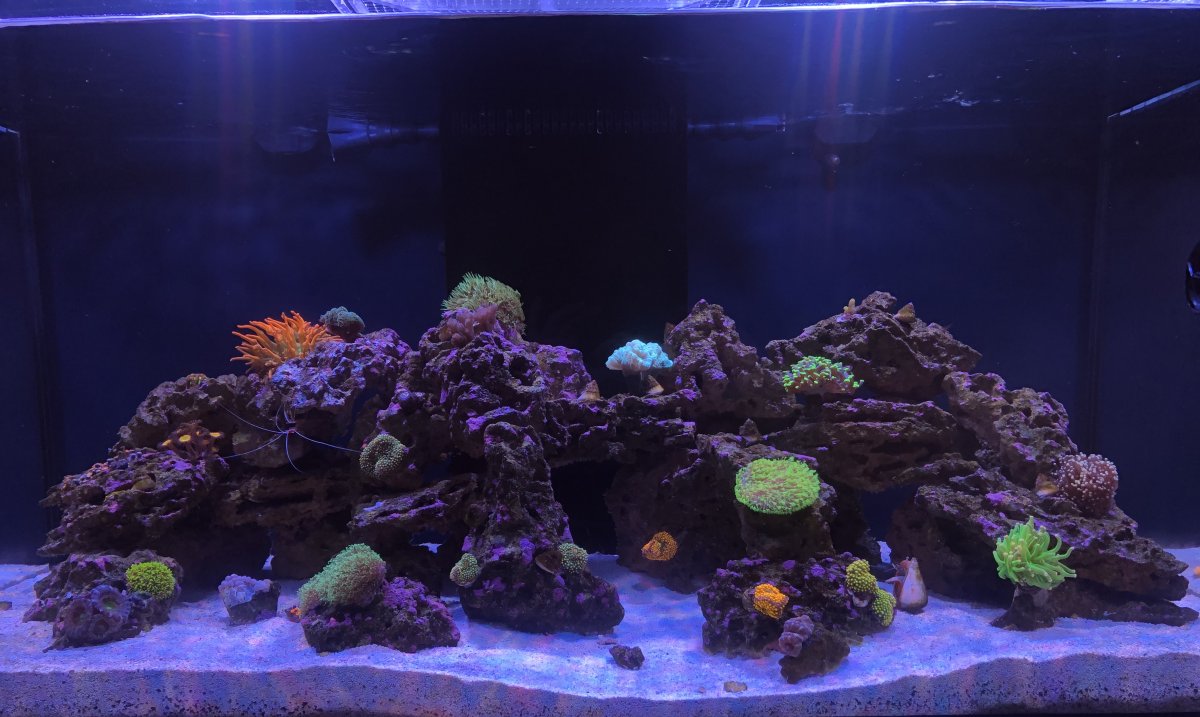 Adrift said:
You need to upload your videos to YouTube first. Then share/copy link here sadly you can not just share videos from phone.
Click to expand...

Thanks. I deleted the text of the attempted posts of a video. Hopefully that will let the page load normally now. Wish I could actually delete the garbage posts for real.
OP

When you're having windows replaced in the room with the tank sits, and you know they'll be carrying boards (with nails sticking out) and other nasty things past it... 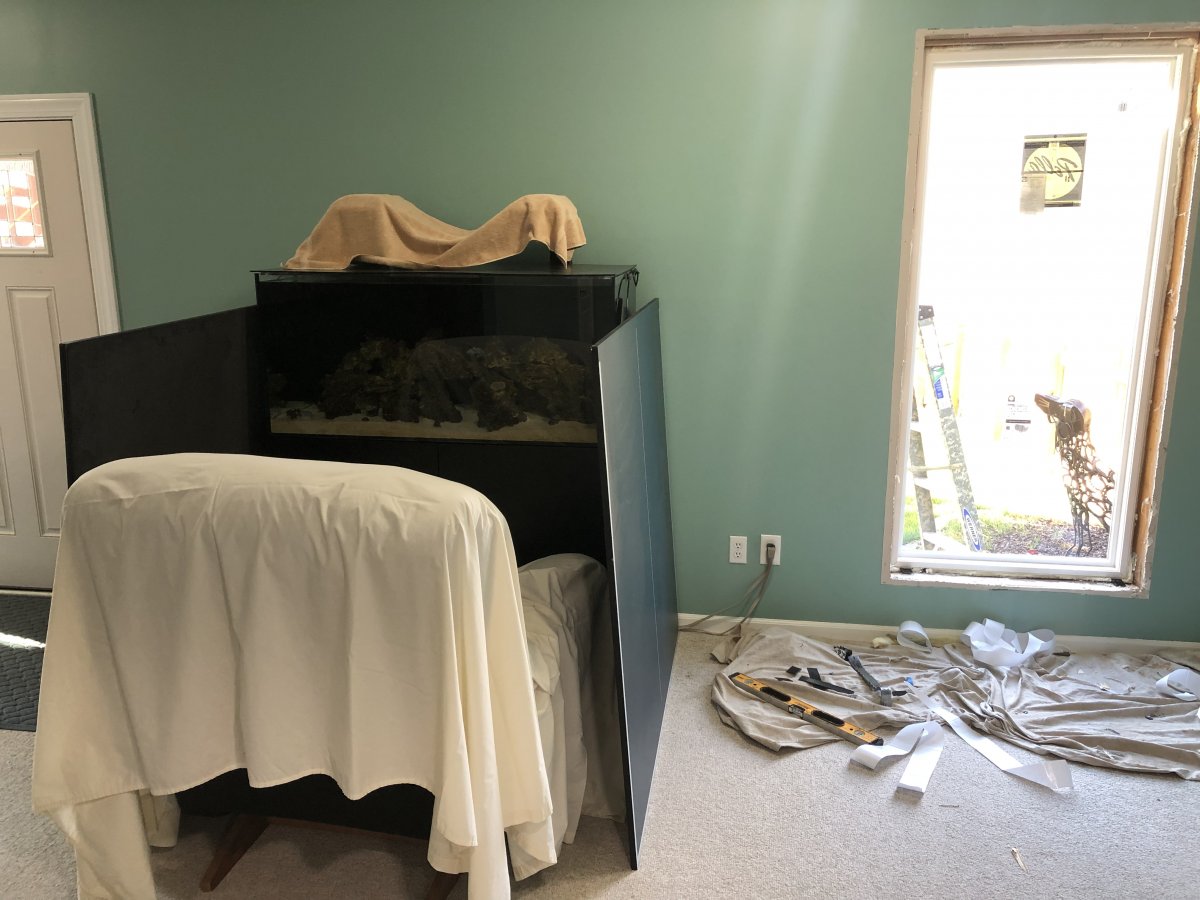 FiddlersReef said:
12/01/2021
I finally remember that I had one of those Orphek lens sets, and boy does that let the photo show true colors.

So here's where I'm at as of today. Two more weeks before fish can go back in!

Hopefully I can keep this thread current, just in case anyone actually looks at it besides me.

So how did that fallow go? Going through one right now and curious to see how it helped.
OP

kiran said:
So how did that fallow go? Going through one right now and curious to see how it helped.
Click to expand...

I think pretty well. It took forever while I was waiting, but then didn't seem that long once it was over, if that makes any sense.

When the fallow period ended, I moved the 5 pajama cardinals from the QT back to the display, but kept the firefish in the QT because I'd started with two, and he killed the other one and was harassing the cardinals a little. I want to make sure he goes back into the DT last after it is restocked in January. 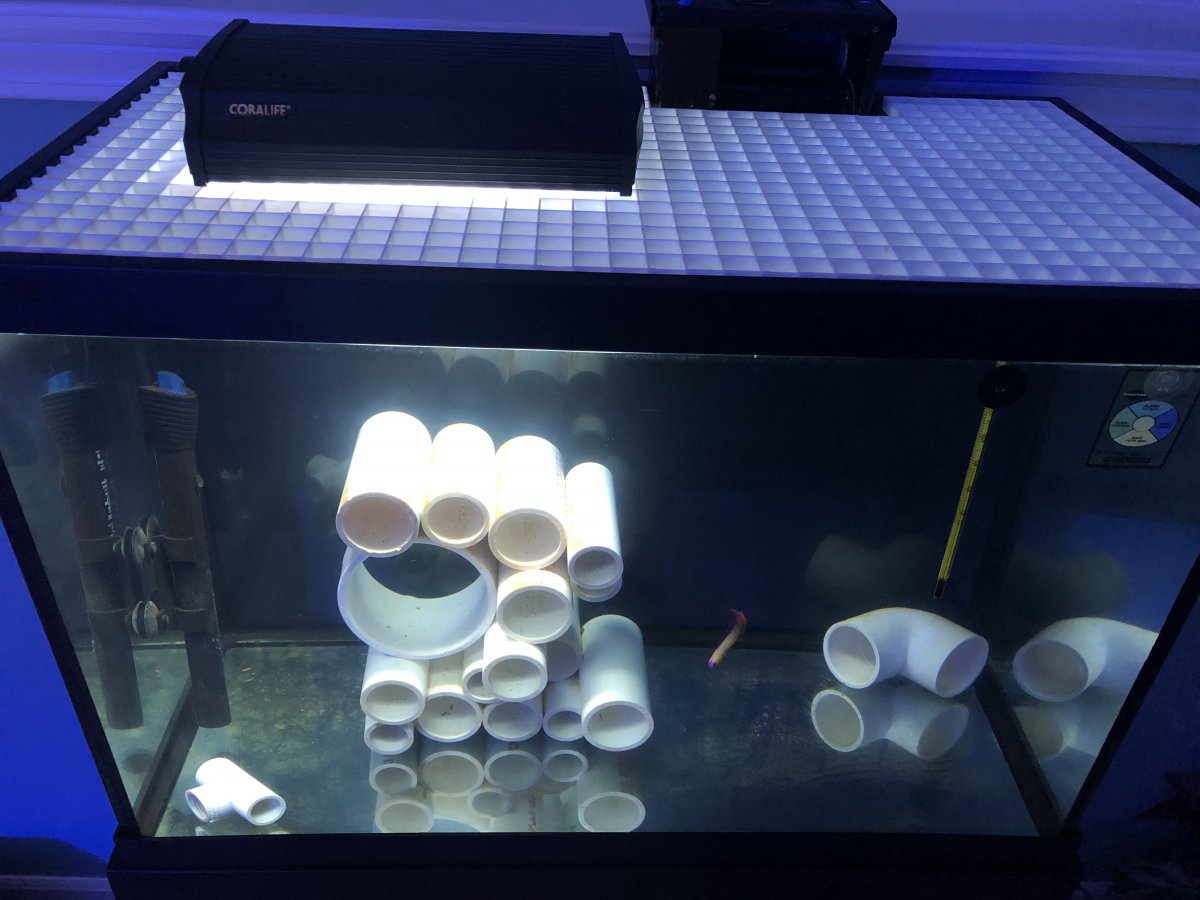 I also added 3 quarantined fish that I had ordered (two clowns, one foxface) to the DT about 3 days later. (I ordered them from Dr. Reef, and had initially said "please don't ship before the 16th because of all this going on" and no matter how I tried to call, email, and text to delay the shipment, they arrived anyway and must have had a pretty rough trip. That'll be my first and last order from there.)

The two clowns were super small and I couldn't get them to eat anything and they both died. The foxface looked dead for a couple days, literally just laying on the bottom on his side with no color, but now he's up and about. Now two weeks later he and the cardinals are doing great, getting used to movement in the room, and eating well.

I have my restocking plan on order from TSM Aquatics and they will ship January 3, 2022. Then I'll give it a week or two and move the firefish back.

So overall...
Pros:
Tank is healthy again.
Corals LOVED having no fish around.
Parameters were absolutely perfect for months.
Pod and microfauna population exploded because I kept dosing copepods and phyto from AlgaeBarn and nothing was hunting them.

Cons:
Really, none, other than that phosphate and nitrate are creeping back up now.

I thought I'd hate an "empty" tank, but really the tank was never empty. I mean I was still caring for 30+ corals, doing water changes, making sure the shimp got some food (I think he thought he was king of the world as the lone larger lifeform in the tank). It just meant an extra small water change each week on the QT in addition to the main tank.
OP

The fallow period is over, and the survivors are back in the tank, plus a new Foxface who, after a couple weeks now, is happy and is only afraid of me about 20% of the time now.

And here's the monthly videos:
Front view and walkaround

I've also switched out the wetside cover of my MP40s for the Neat Aquatics versions. Less easy for a fish or anemone to get in, and they screw on just like the stock. These are the "wider" pattern versions, so I was able to increase the flow about 10%

My long standing, held order from TSM will be here next week, and then I'll be really happy again.

My tank is in the basement, because there wasn't a reasonable way to shore up the first floor to know it would handle the weight, which means I don't see it as much as I'd like (though I'm down there at least 30-60 minutes every day anyway).

But I was able to find a webcam that will stay on and streaming as long as I want (maybe that's normal, but the simplisafe camera I tried to use would disconnect after a few seconds).

So now downstairs I have the camera mounted to a cheap TV table... 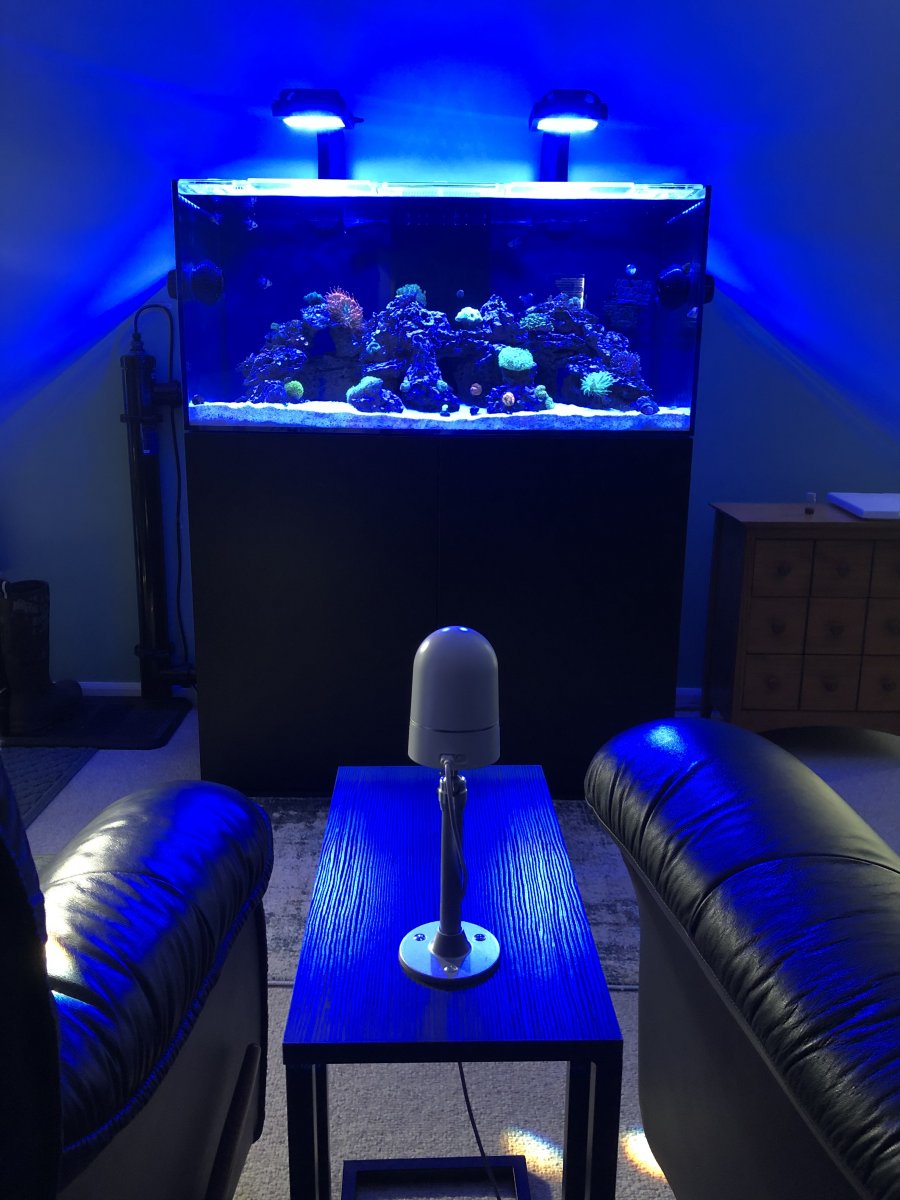 And now on my desk (I work from home) I have a window to the sea via my old iPad... 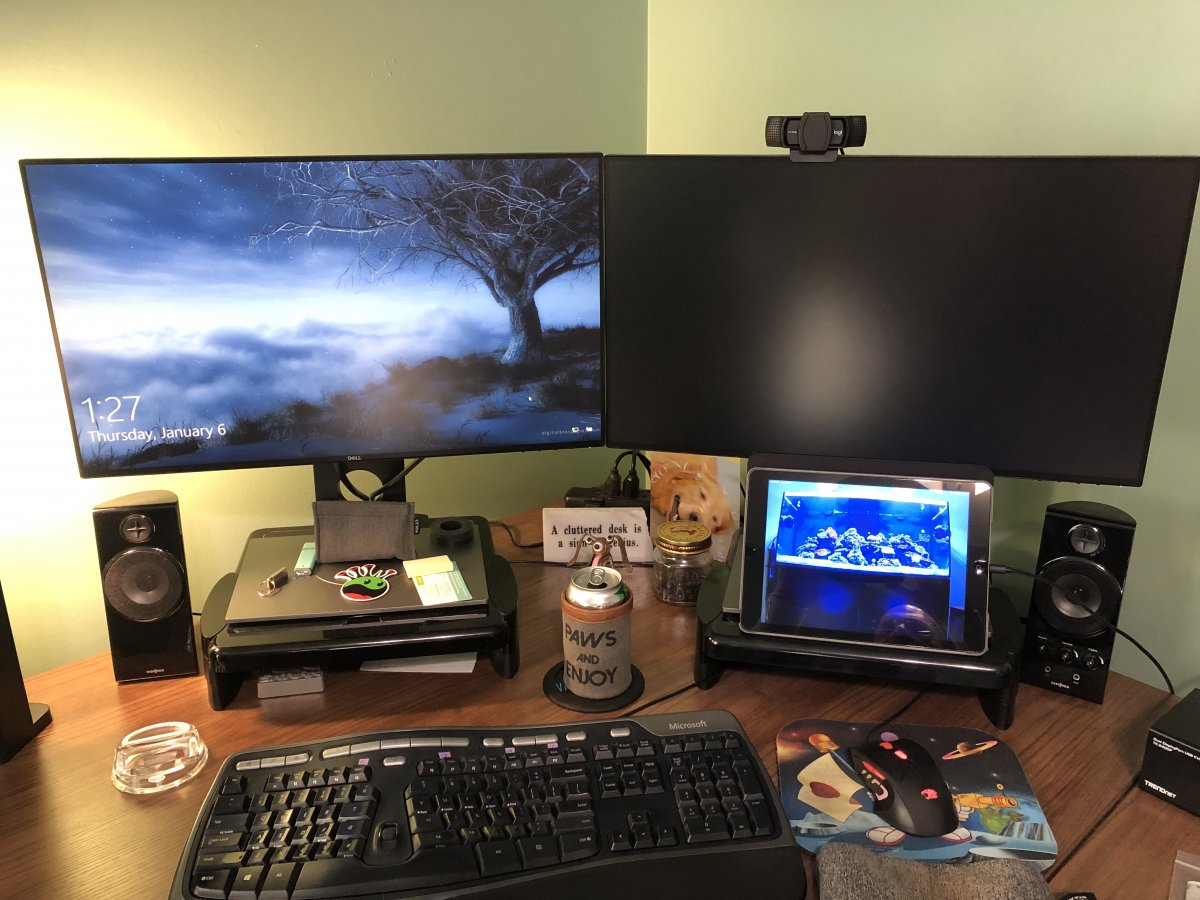 Plus it has a sound alert, so if an alarm starts beeping, it will let me know (or if I'm at my desk, I'll hear it).

Not being down there frequently is the only downside of the basement. Otherwise it's ideal because down there I have a small refrigerator for all the food and supplements and such; a dedicated circuit, a sink, my "lab" work area, etc.
T

Glad to see everything is looking up. I did not QT either but managed to escape disaster. I will be setting one up for future additions though for sure. My home office is in my basement specifically because that's where I was allowed to set up the aquarium. I love being down here able to watch it all day, though. That gigantic UV made me chuckle for sure, makes my small 15w hang on look like a chump.

R
Build Thread Back, bigger and better than ever!

Build Thread Nano Back from the Dead: My BioCube14