Return to the Reef - My Fluval 32.5 Marine Tank

Can you add more lights into the hood?

Nubomb said:
Can you add more lights into the hood?
Click to expand...

@Nubomb yes you can add another light and run 2. i've read many reviews that say the original 1 is plenty but to each is own.

You can take off the feeding hatch also. If you place one of those food defroster underneath, the fish can't jump out and you will get a little air flow over the surface

skiff21 said:
@Nubomb yes you can add another light and run 2. i've read many reviews that say the original 1 is plenty but to each is own.
Click to expand...

Everything I’ve read and watched says the 1 light is adequate. I run mine not even close to full power and so far have had good results.

Nice to see other owners of this specific tank around here! I wanted to add just incase you guys haven’t seen them yet. inTank also makes “flow directors” that slide in the open space on the side of the media baskets. They force almost all the water over the top and through all the media chamber levels.

also I saw one post about chemipure above. Be careful as one tiny bag stripped my tank of nutrients more than I would have liked. Ended up taking it out.

Excited to see your build continue. I’m patiently waiting for some more coral for mine to arrive now

It has to be over halfway up the black honeycomb to really waterfall into the basket. It is still an inch or so from the top.

You'll be filling water every few days. Small price to pay to have much better filtration.

Been meaning to update this with tank status, but just been busy and adjusting things as I fight through new tank problems (diatoms, green hair, cyano, etc...)

Yeah yeah, this is a good thread for this tank I beleive, because I have never found anything about it lol. But yes you will need to keep your tank topped like mentioned above half way up the honeycomb. I rarely top mine off though. And if I do I usually do it with some fresh bottled water. If i have to do to much i just do a water change, which if its that much its usually time to clean anyway. I only have fish though and no corals so i can get away with it.

Fantastic, thanks for sharing

Please see my tank thread. And others. I have 2 lights, skimmer, additiinl pumps and ato. Fans in the hood. I Never have temp flucs over 1 degree.

I’d say the things I’ve noticed so far with this tank are
1. The return pump could use an upgrade, i think the next up would be a 250 gph pump, beleive this would increase the intake through the filters as well. Am i wrong?
2. I get a lot of build up on the front glass. Mainly from the middle down. I have a diamond goby who is always sifting so i wonder if this could by why but still it should collect on the glass like it does. More annoying than anything.

Any one else notice anything? I personally haven’t had any issues with temperature mine stay consistent 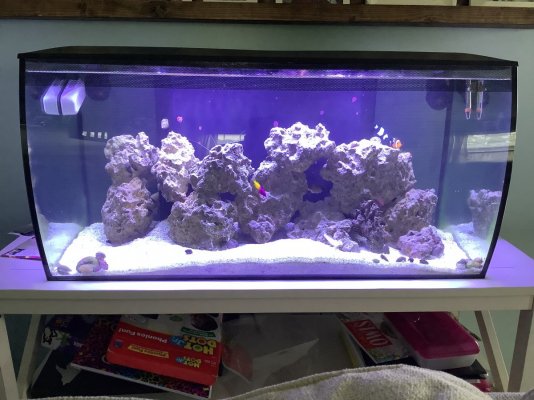 Lsuhunter said:
It has to be over halfway up the black honeycomb to really waterfall into the basket. It is still an inch or so from the top.
Click to expand...

That looks awesome, great job on that! I never have any luck with corals. Fish and inverts for me, and a couple anenome’s

wonroc said:
Please see my tank thread. And others. I have 2 lights, skimmer, additiinl pumps and ato. Fans in the hood. I Never have temp flucs over 1 degree.
Click to expand...

BlueFish1 said:
Didn't see a whole lot posted about people's experience with the Fluval 32.5 Marine Tank, so I figured I'd share my own setup and open myself up to advice/comments/questions!

This tank has been up and running for a couple months now. I've added a picture (sorry for the blue, that just how my phone takes the photo with the lights, and the floaty stuff is all microbubbles my skimmer pukes out). I went for a more concentrated reef look with lots of nooks and cranny's to hide in. Plus fun to watch the crabs climb the walls.


As far as parts and stock:

3 Firefish - They're all buddies and like to hide in the same spot
Bunch of snails and hermits to keep the algae at bay.

Food:
Right now, just feeding the Firefish TDO chroma boost daily. I'll probably add some frozen food to feed a couple times a week when I add the clowns in. Open to other suggestions as well.
Will be using Marine Snow when I add corals/dusters

Dosing/Treatments:
Not doing any type of dosing right now. Not sure of what I should be adding, if anything, to be honest. I do add some bio-spora after I do a water change.

Ongoing Issues and how I've been addressing them:

Temp Fluctuations: This has been the biggest pain point for me. Given that this system is hooded (and a narrow hood at that), the tank doesn't have a very good system for dispersing that heat. The heater is set to around 76, but on hot days the room the tank is in (despite the fans) can climb to almost 80. To help, I keep the lid off the filter compartment and take the entire hood and slide it back about an inch (not enough for the firefish to jump out because they're known to carpet surf). While this has helped a bit, still worried about maintaining temps. The fish at this point don't seem to be happy in the last few days. They're normally out and curious, but due to the heat, have been hiding together in their cave. I would hope its to conserve energy, but they still come out and eat. I've also been turning the lights down earlier to keep the temps under wraps. I don't want to invest in a chiller as they're all super expensive to a nano build. I'm trying to figure out some AC for this room as an alternative. I have seen some DIY posts about adding a fan to the lid, but I don't want to break the lid trying to cut a hole for a fan. So if anyone has any advice about fitting a fan/cooling system to the lid of this tank, please share! I had to bribe the lads with some food to coax them out for pictures.

Diatom blooms: After the cycle completed in a few weeks (thanks LIfeRock!), diatoms started showing up. Snails, crabs, and sand turning during water changes help control it.

Skimmer - Had microbubbles for about 4 weeks before they started to calm down. Fluval support has been less than helpful. Tried fully closing the air tube to the collection cup, nothing. I've gotten them to reduce a bit, but still have them. I wish I could figure out how to eliminate them completely. Water level is right between the lines.

Fish: Along with the 3 firefish I have now, I plan to add a pair of clowns (thinking snowflake. I like the white!), maybe some sort of sand dweller (like a blenny or goby), and either a dwarf angel or reef safe wrasse (like a small fairy wrasse). I think even then it might be too much, but will have to see how the tank params play out after slow additions.

Corals: I won't be doing any corals until the second light shows up. Haven't figured out what types I'll go for. Mostly looking to improve the aesthetics of the tank. Maybe some star polyps and mushrooms, maybe some easy SPS as well

Inverts: Other than keeping the cleaning crew going, Will probably add a couple featherdusters, and maybe some coral banded shrimp or sexy shrimp

Overall, my plan to stock comes with making sure all the tank params are OK to add. As far as equipment, I can't really think of anything else that is needed (other than something to help control temp with the closed lid). Any suggestions/comments/questions are greatly welcome! Been away from the hobby for a while now, so guidance is always appreciated.

As it grows and I add more, I'll be sure to add more pictures! 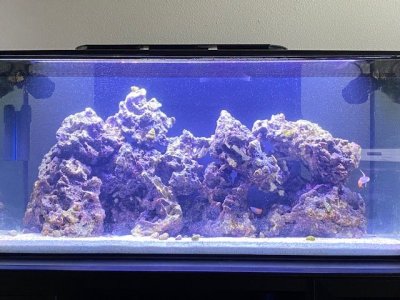 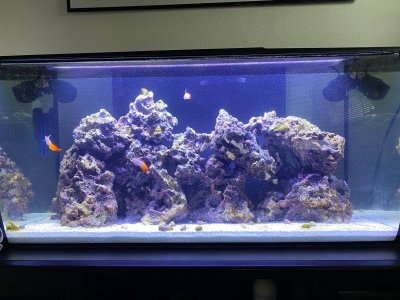 How are your power heads working out in that location? What size are they?

2 Voyager Sicce Nano 530 GPH are great for this tank​