Hi all,
Been lurking here for over half a year, and occasionally posting. Figured it was time to share/document my build.

Green star​
Zoa​
Pulsating Xenia​
Kenya Tree​
Duncan​
Candy cane​
Acans​
Montiporas​
Jingle Bell​
Florida Ricordia (not doing well)​
...and a few others...​
Been a fun journey so far. Definitely learning quite a bit (thanks to all on R2R!).
I'm looking to add additional flow. I've pretty much scoured the forums and have come to no conclusions as there are as many varieties as there are posts...lol But what I'm considering is either two small power heads or one larger. Budget is a concern, as is flexibility. Ideally I'd like as random a flow as I can get, which isn't probably possible with just one powerhead, but this isn't going to be a major SPS tank either, most LPS and softies. What I've narrowed it down to: 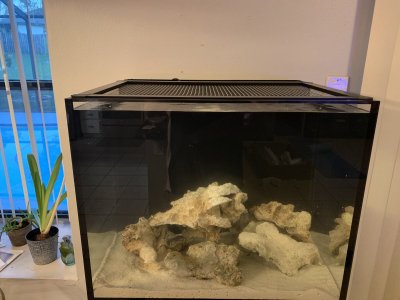 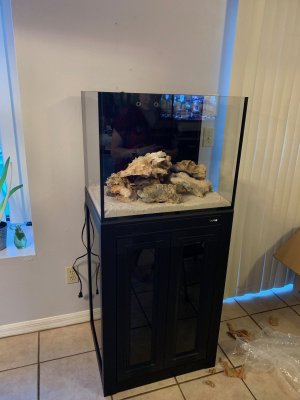 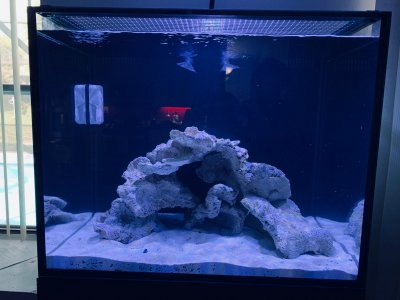 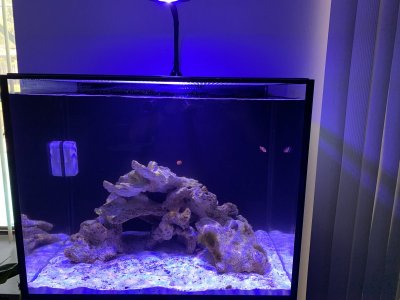 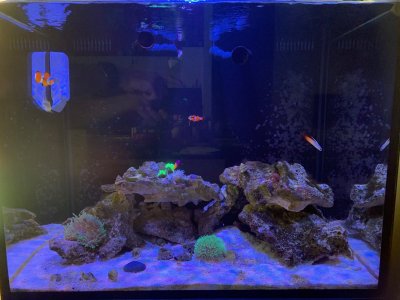 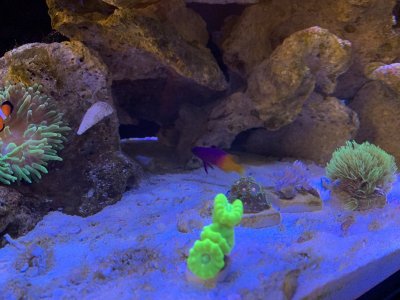 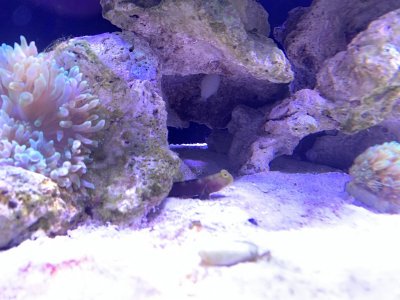 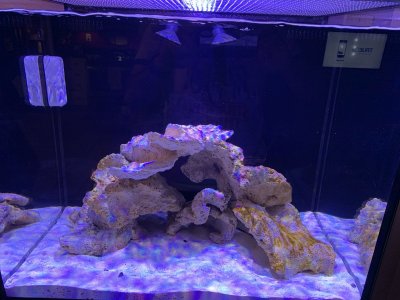 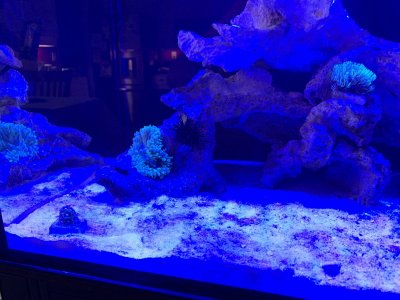 I would definitely upgrade the return pump and go from there.
OP
R

Time for an update (New pictures below). It's been 10 months and the tank is thriving. There have been some tragedies, but overall lots of progress. Corals are doing really well and several are growing like weeds. I have several frags that I've trimmed from the main colonies (pulsating xenias, green star, and kenya tree). I'll probably just take these to my LFS for store credit. I still don't know anyone in the are to share/trade.

Fuge update:
After several attempts to get a fuge running in chamber 2 I've given up. It was probably my light, but it did grow algae rather well, just not any culpera or chaeto. The macros would last about a month and simply wither away. It was a good attempt. I do have some dragons breath growing in the display tank. I initially had it glued on a rock in the sand, looked great until the urchin mowed over it. I ended up getting a frag rack that suctions to the glass and sticking it up. Well, he found it...ugh. It's still growing, but is about 1/4 the size it was when I got it. Any ideas on how to get it to grow quicker?

Fish update:
Back in early Nov-2019 I had some sort of bacteria infection. It took out 3 of the fish, both clowns and the royal gramma. Very sad. Lost all three in about a 10 day period. LFS recommended Dr. G's medicated caviar. Fed that to the remaining tenants (goby and firefish) for 14 days. Got a mandarin in mid Dec. My pod population has been doing well and it's something that I always wanted. Unfortunately he only lasted 4 days. No real signs of infection or trauma. LFS couldn't really pinpoint a problem, but in my pictures they did notice I had an outbreak of aipasta. Darn, I thought it was feather dusters...lol I got 3 peppermint shrimp and a yellow coris wrasse. I love the wrasse, he is all over the tank and has quite the personality. He is a slacker though as I think he ate all my pods instead of the hydroids. I'm still dosing about 1ml of phyto a day hoping the pods will make a come back. Latest addition in early Jan-2020 is a pair of pink skunk clowns. I ended up ordering them from LA. Though a bit pricey with shipping and handling they are a really nice pair of fish. Much bigger than I expected. So far they haven't taken to the anemone, but they are venturing around the tank.

Equipment update:
The stock return pump has been updated to a mighty jet midsize. Nice quiet pump, and I like the feed option. I also got two skimz 6.0 wave makers. I ended up going with the smaller size since I was getting two. Plus the minimum speed of 158gph was a plus. I didn't want to blow everything around 24/7. I also recently purchased the Hanna HI98319 salinity tester. I purchased this over the Milwaukee as it had a decimal precision over the Milwaukee on the ppt scale. My refractometer, while functional, was just too hard to read between the lines. I found a good tip on calibration, which really applies to all measuring tools. Before calibration, put the calibration fluid in your tank for 10-15 min to come to the same temp. Then calibrate your tool. This has worked well for me.

Questions:
How do I tag this as a build thread? Will that add the build contributor to my profile? 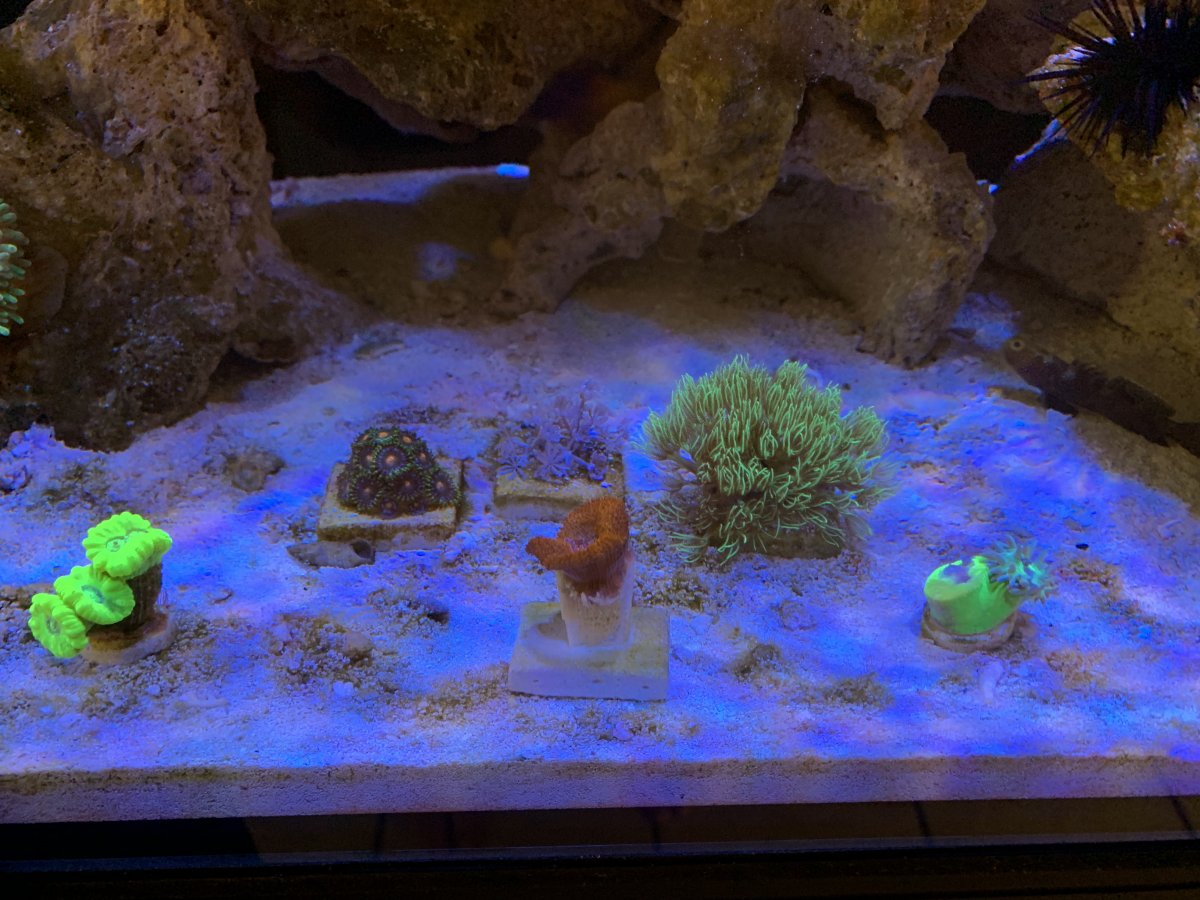 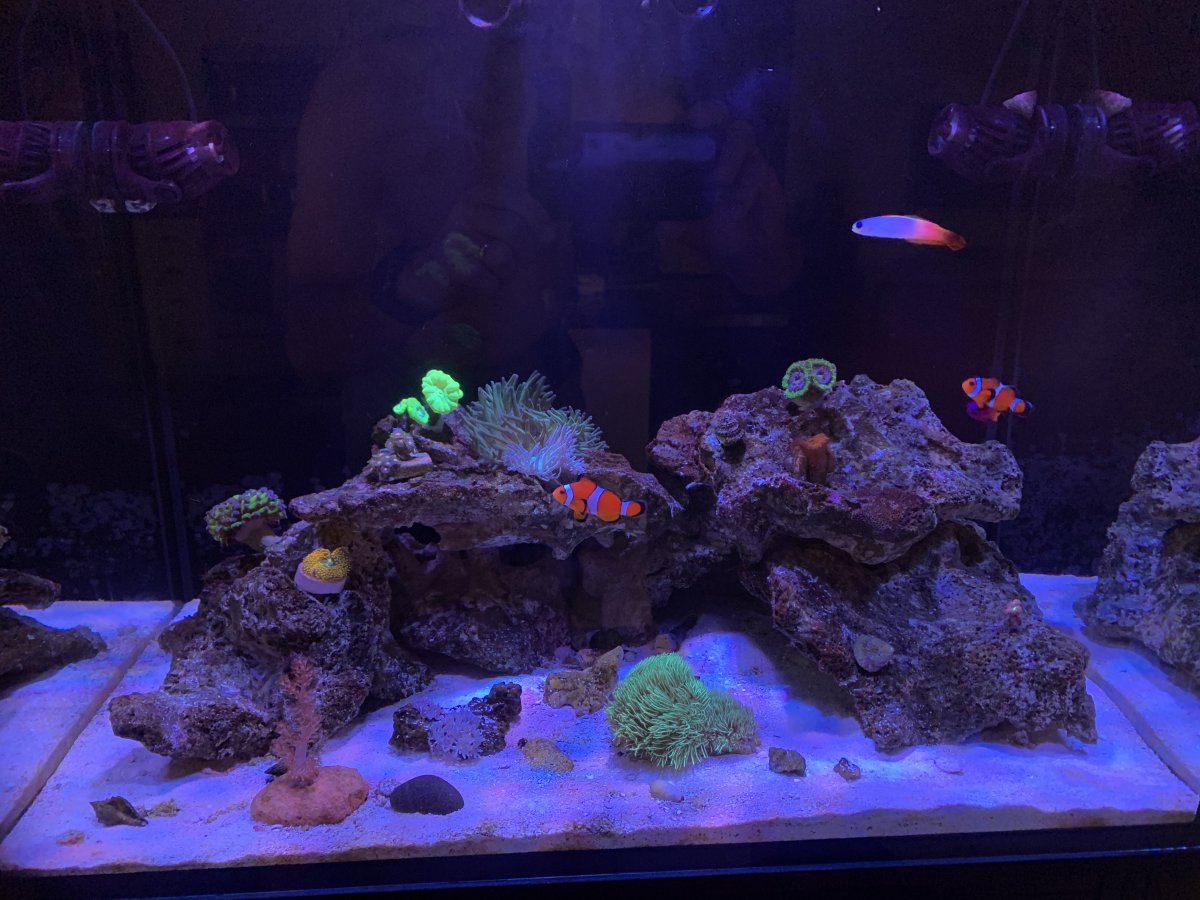 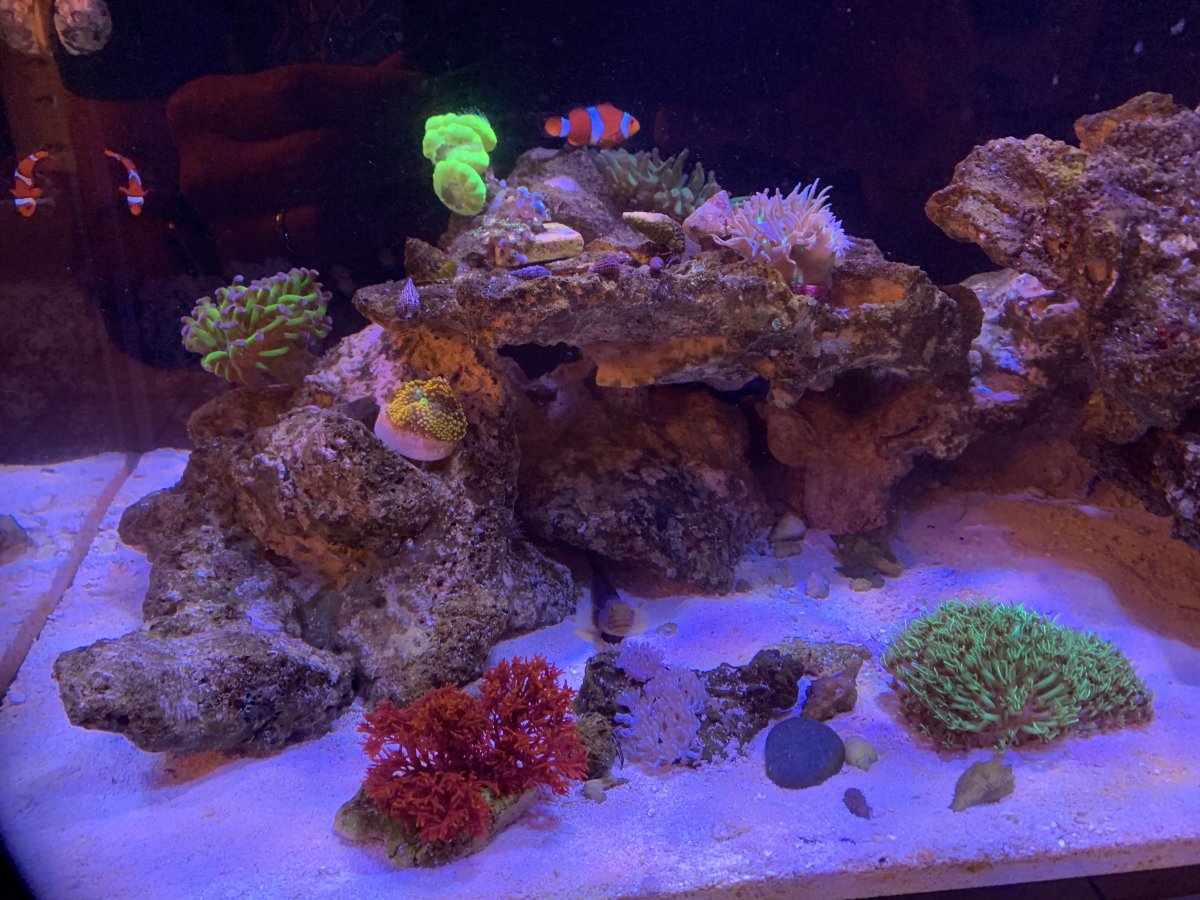 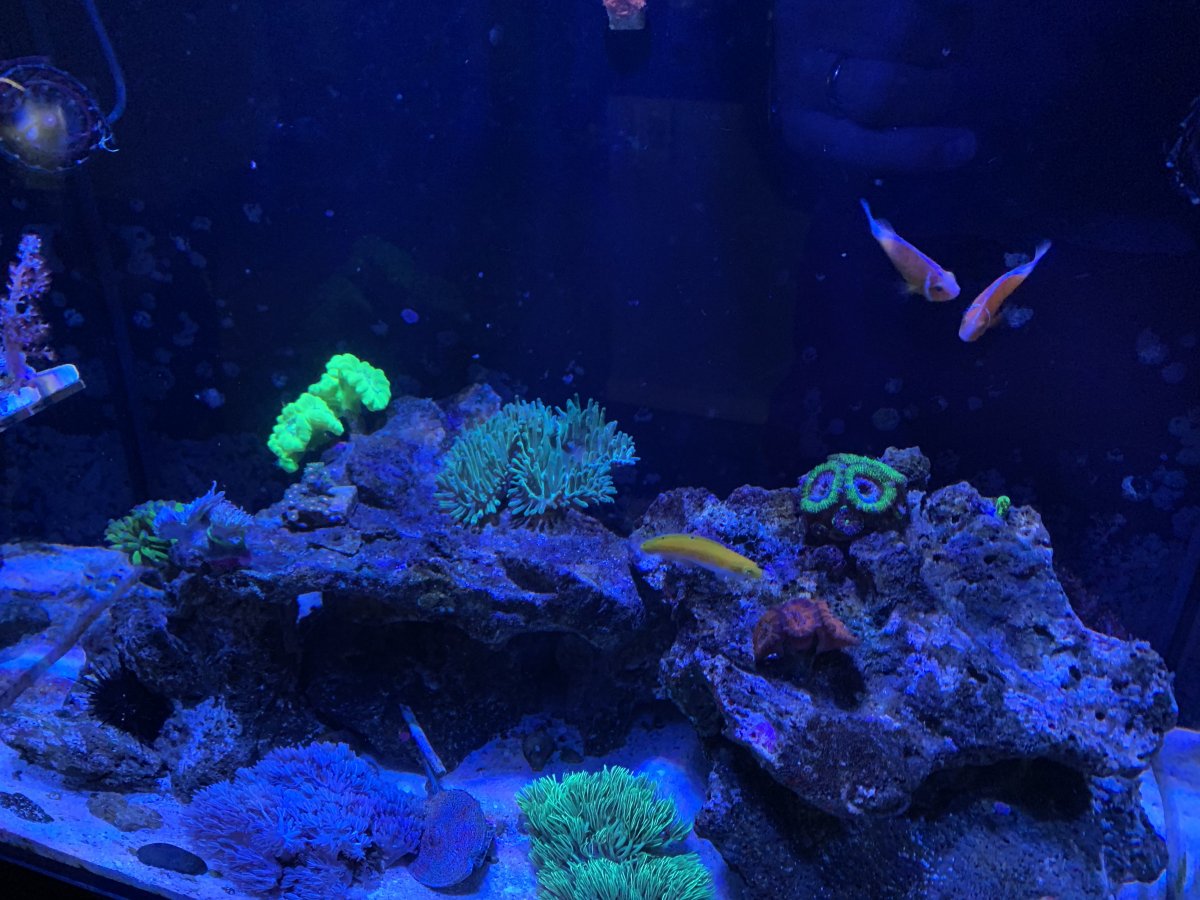 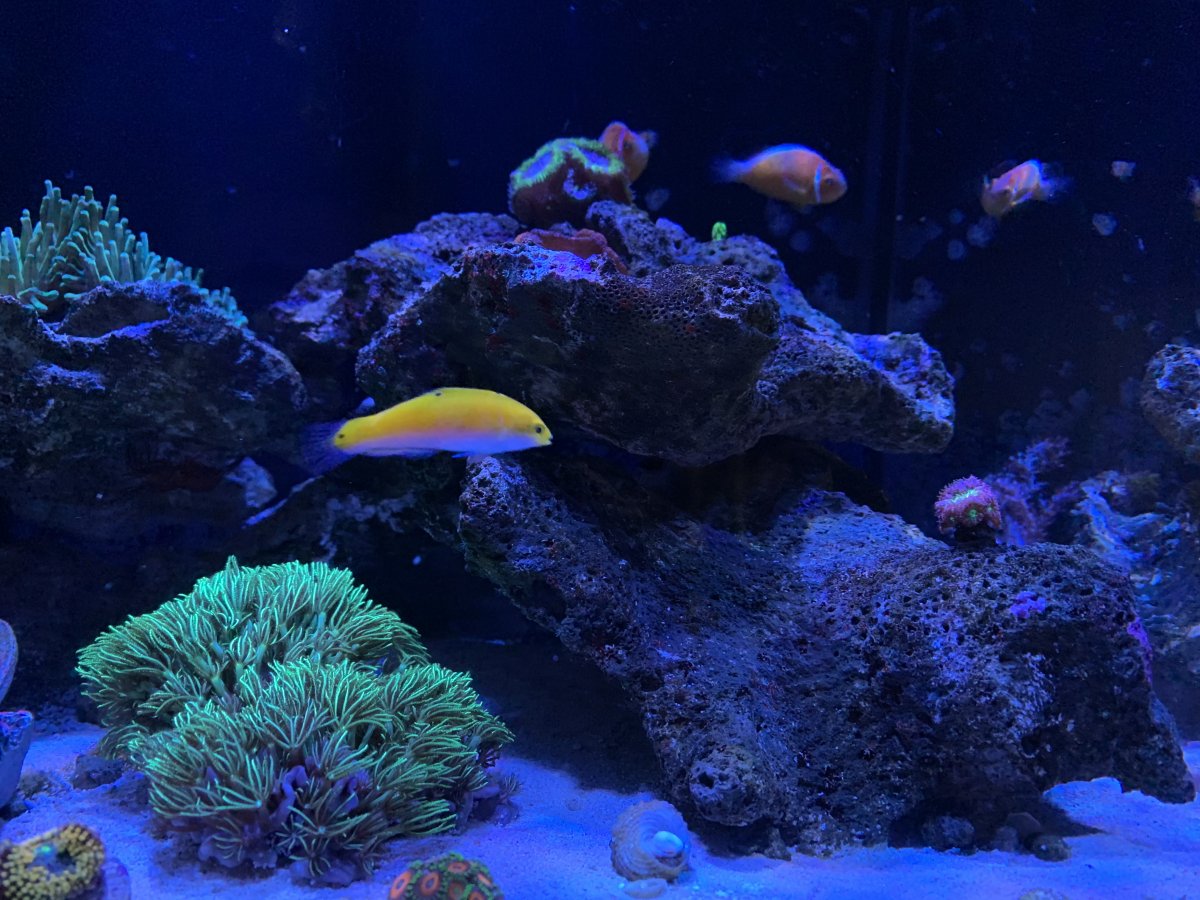 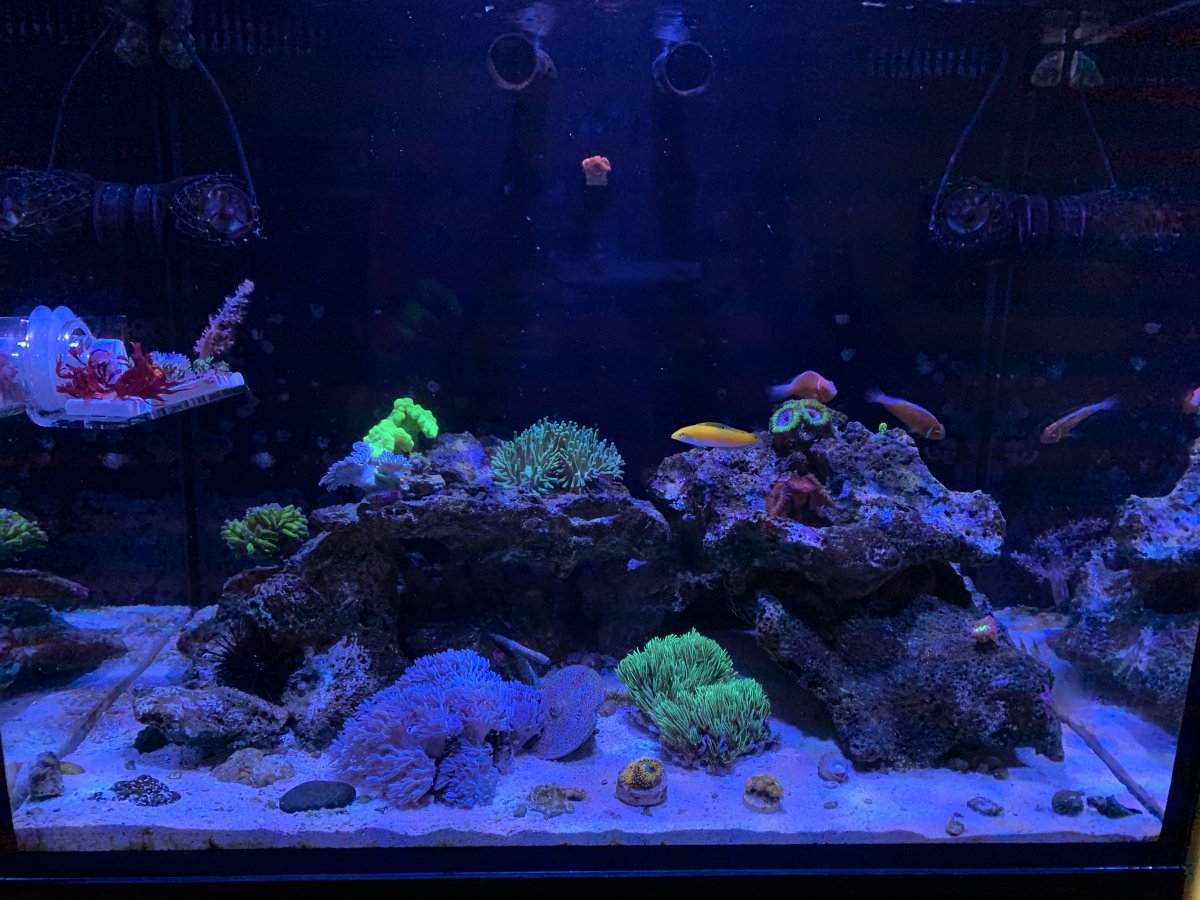 Awesome, man! Glad you got it!
OP
R

Couple of new corals from the Lakeland, FL frag show. Unfortunately the dragon's breath is gone...thanks to Cousin It (urchin). 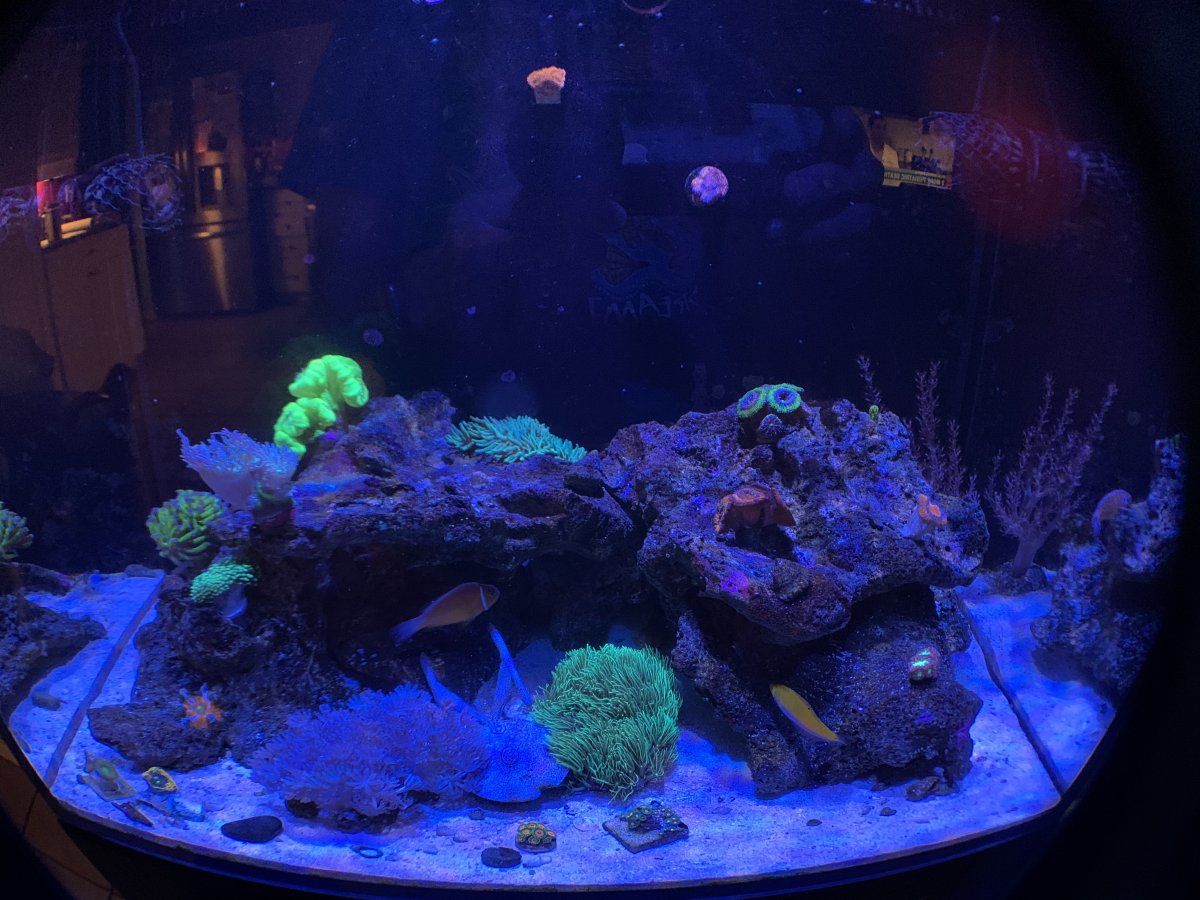 Time for an update.
I upgraded the Toms Aquatic ATO lift pump to an IM ATO pump. While the impellers were clean, at times it would do little more than drip a drop every second. The IM pump is much better, albeit louder. But it only runs a few times a day. I also upgraded from the skimz wave makers to an Icecap 2K gyre. The icecap moves a ton of water. At the moment I have it turned down to no higher than 50%, and it still blows sand at times. 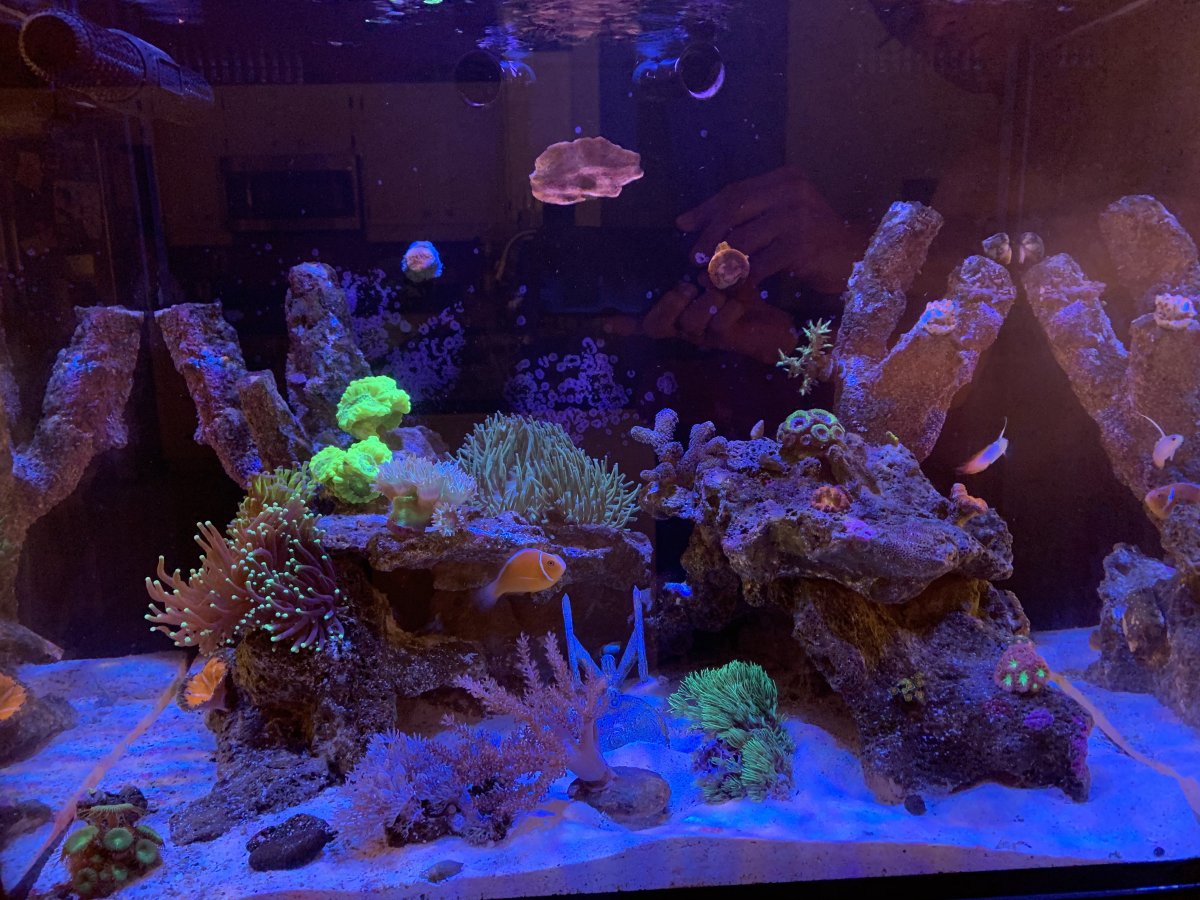 Been awhile since my last update. Tank is still going strong. I am having issues controlling po3 for some reason. I've been running gfo/carbon in the media reactor, but the po3 has spiked to 1.6. I've done a few large (50%) water changes and it is down to .6. But even after changing the gfo with the water changes. It still remains high. Not really sure what's happening. I'm trying a mix of gfo/carbon to see if that works better. Before I had the gfo in a bag above the carbon in the media reactor. I'm thinking maybe the water wasn't going through the bag...not sure as this setup has worked well for the past year. Unfortunately some of my corals have taken a hit, not sure if they will all survive once the po3 levels return to normal.

And now for some pics: 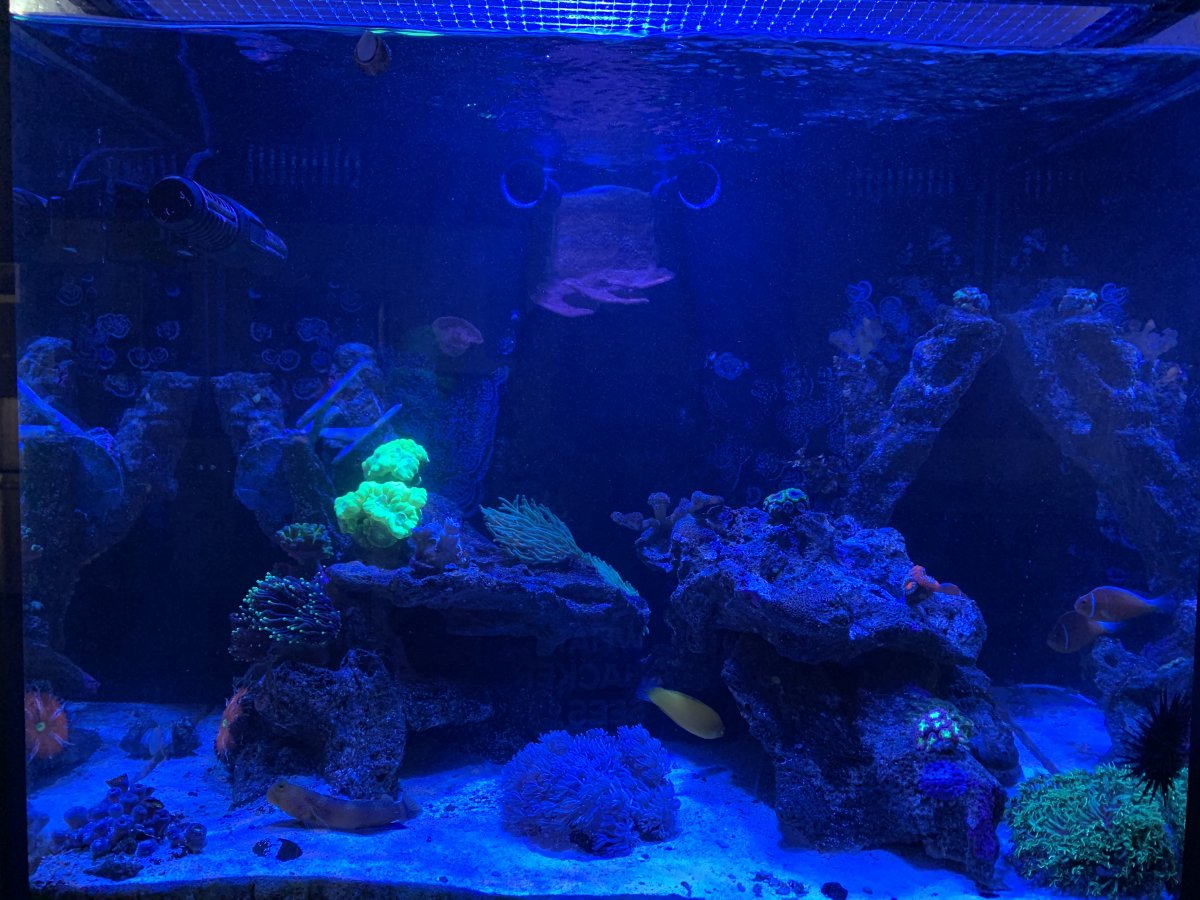 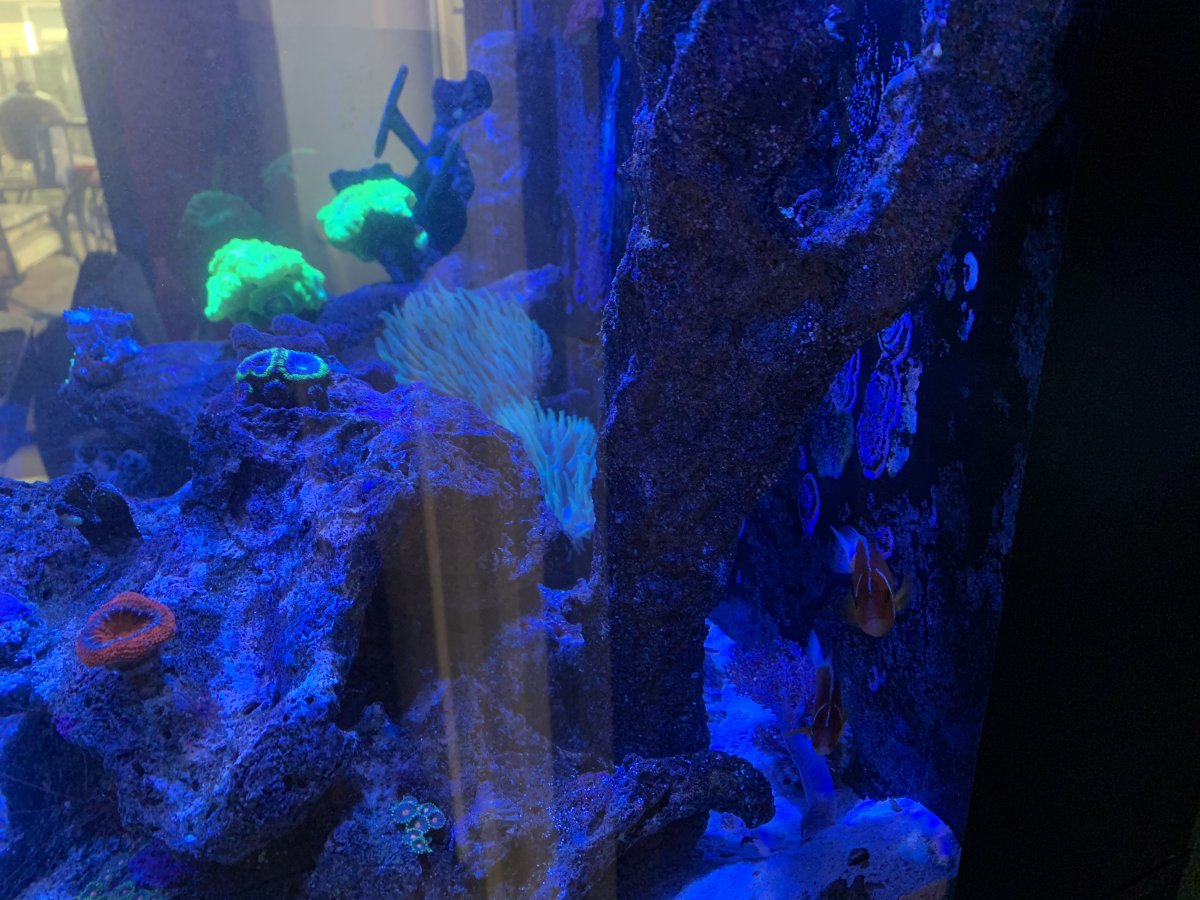 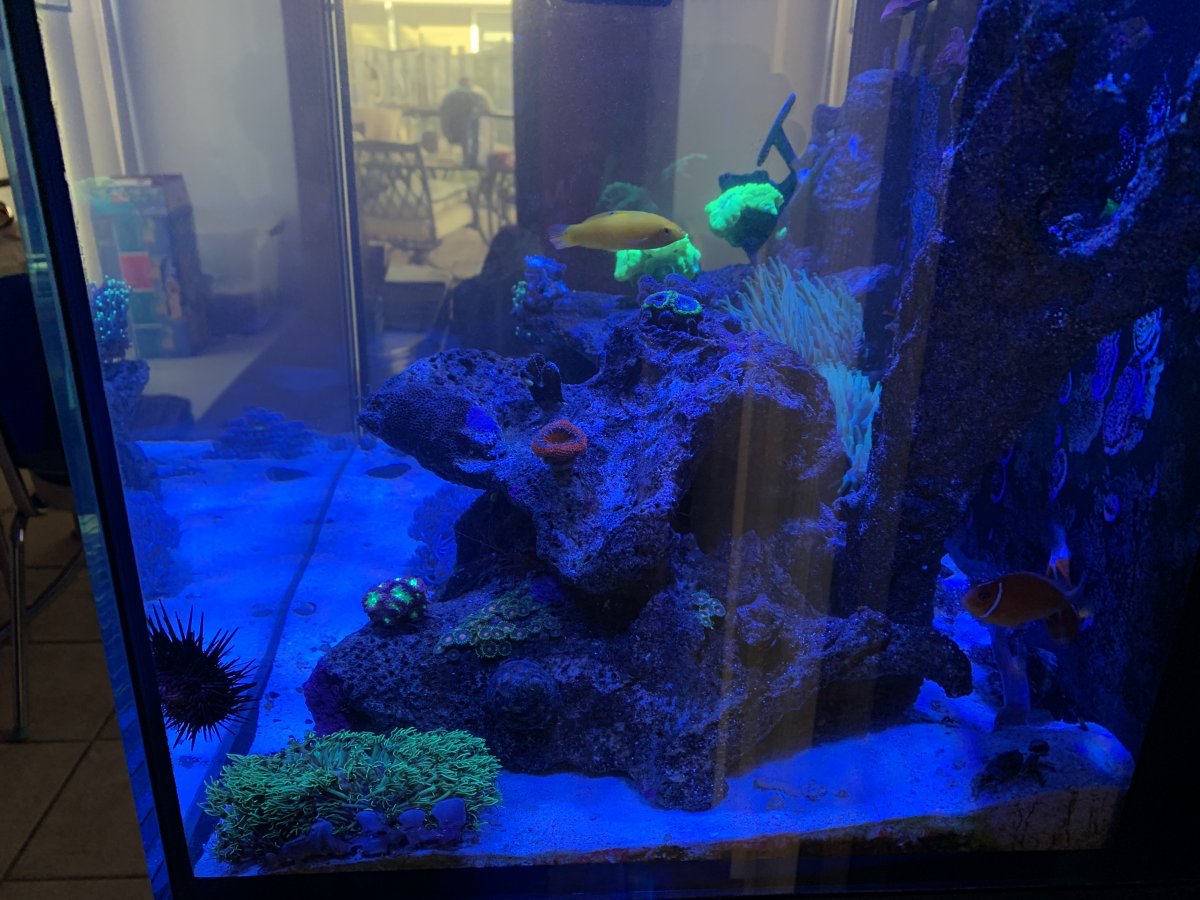 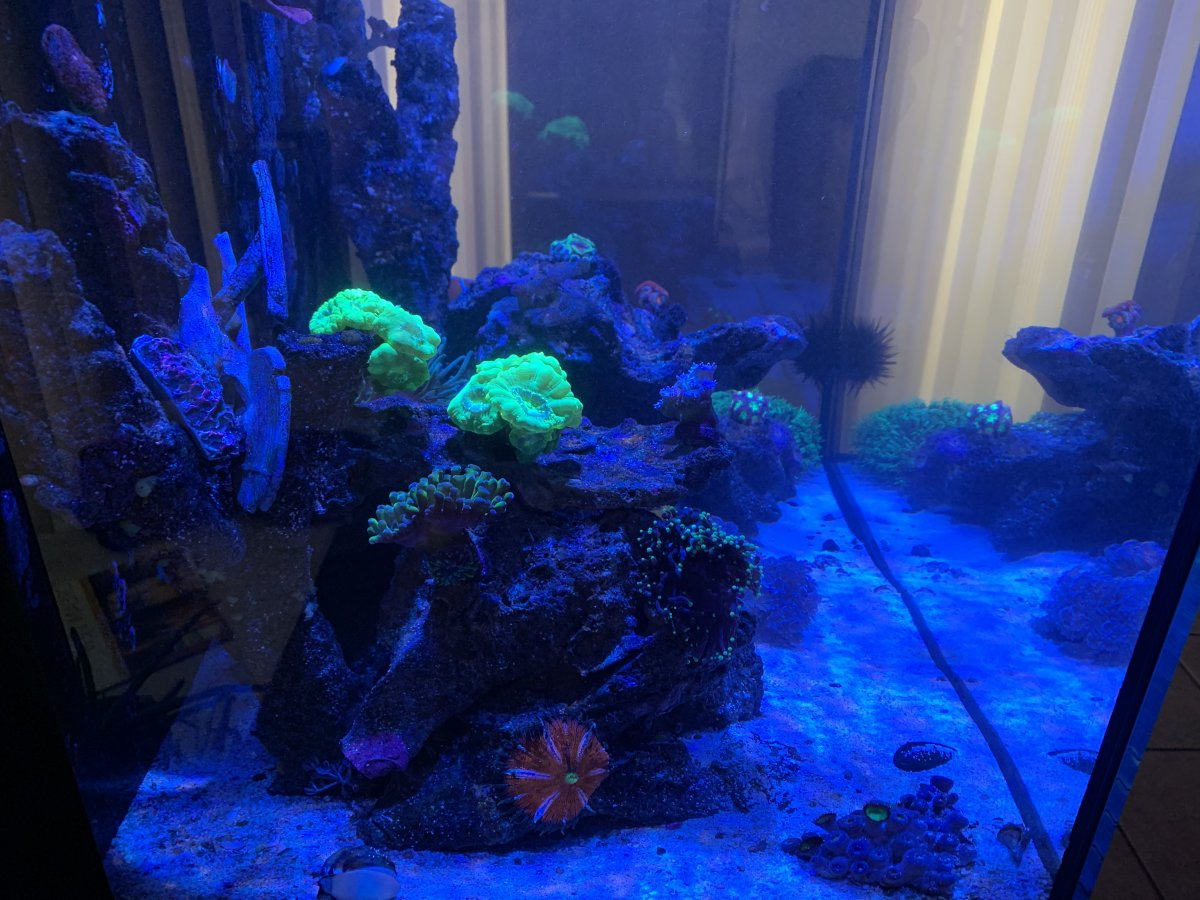