The tank started it's life back in 2015 it was the first piece of furniture to go into our shiny new home at the time we were still doing the house plumbing and electrical! 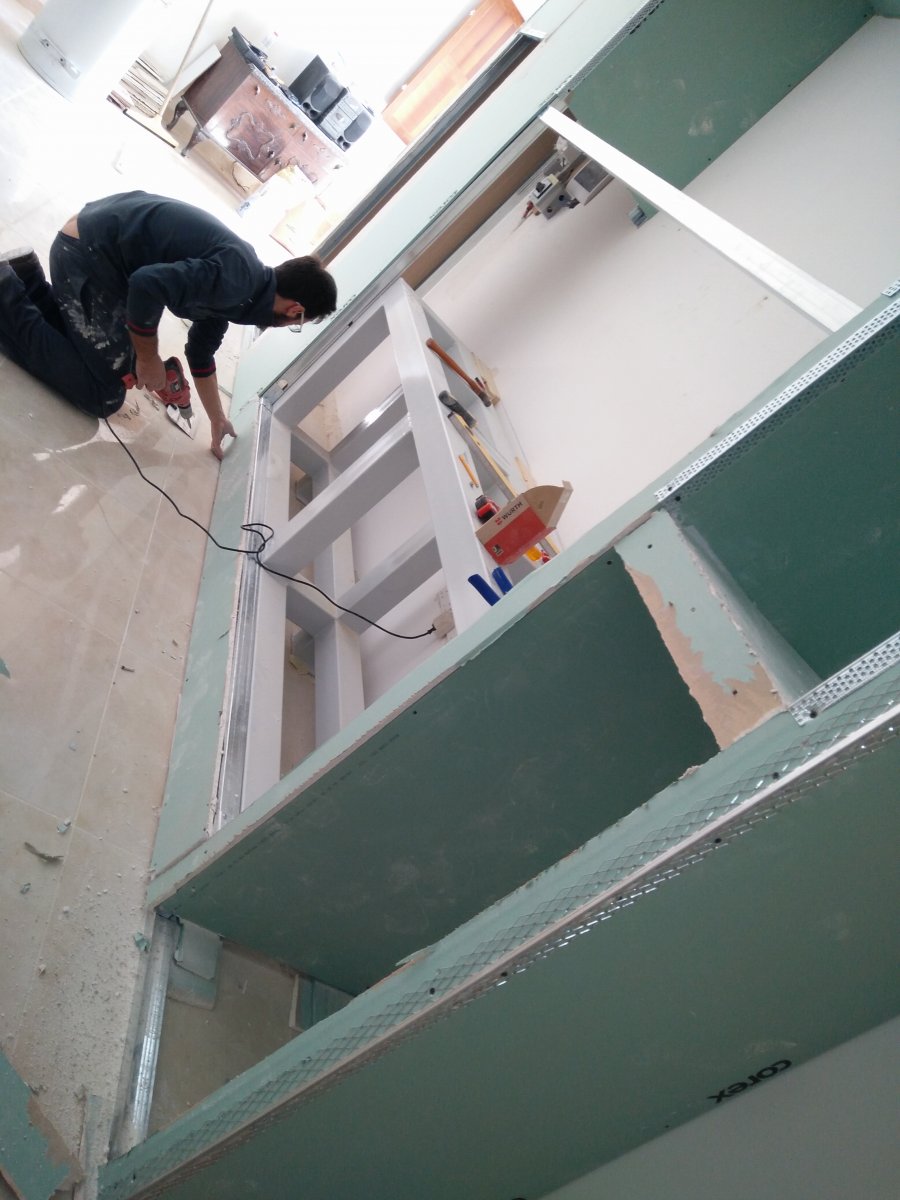 I got a local metal shop to build the metal stand which is made out of 10cmx10cm box section, it's estimated that it can take up to about 10,000kg of weight, the stand is also galvanized and painted with the same paint used on commercial ships needless to say it's sturdy!

After the stand was in place I have then moved along to build the plasterboard unit around my tank which would enclose my equipment nicely. At the same time the tank was being manufactured by a LFS, it measured 220cm(l) x 50cm(l) x 65cm(h).

In February 2016 the tank was in! It took 8 of us to maneuver this 630ltr 12mm glass, double bottom, 300kg+ monster in! At this point the plasterboard was basically ready just needed some sanding and painting. As soon I got the tank in I went ahead and tested it for leaks, since I wasn't in a hurry, I left it for 1-2 months until we finish up the house. 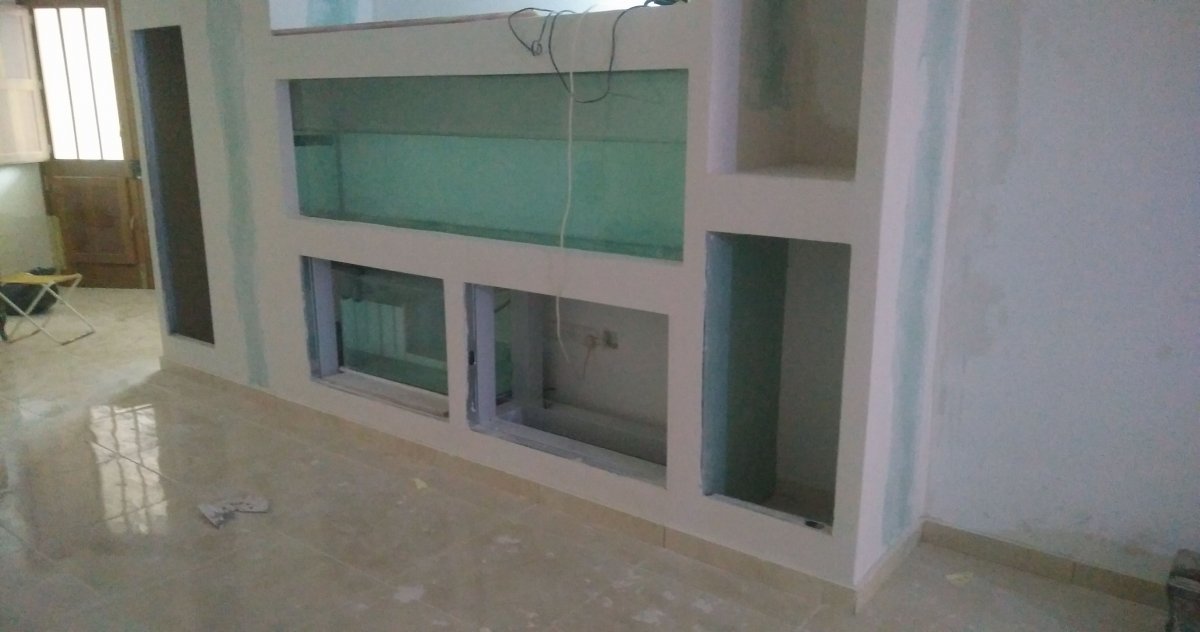 Now that the tank was ready I still didn't know what I was going to use it for. Planted, fresh water, reef? I had no clue.

Once the house was almost done I decided that it was going to house malawi cichlids but since the tank had been sitting for so long in a construction zone it now had to be cleaned thoroughly and trust me that is not a small feat! 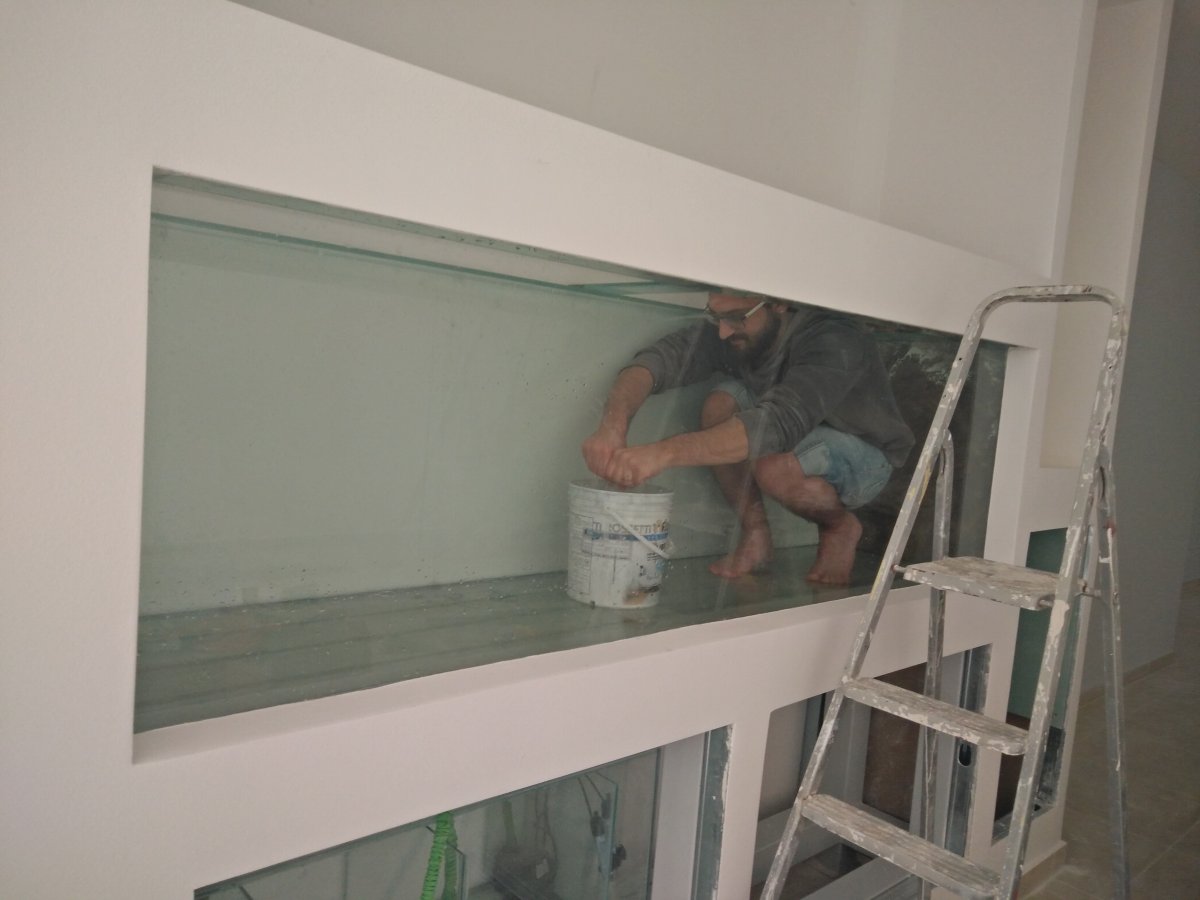 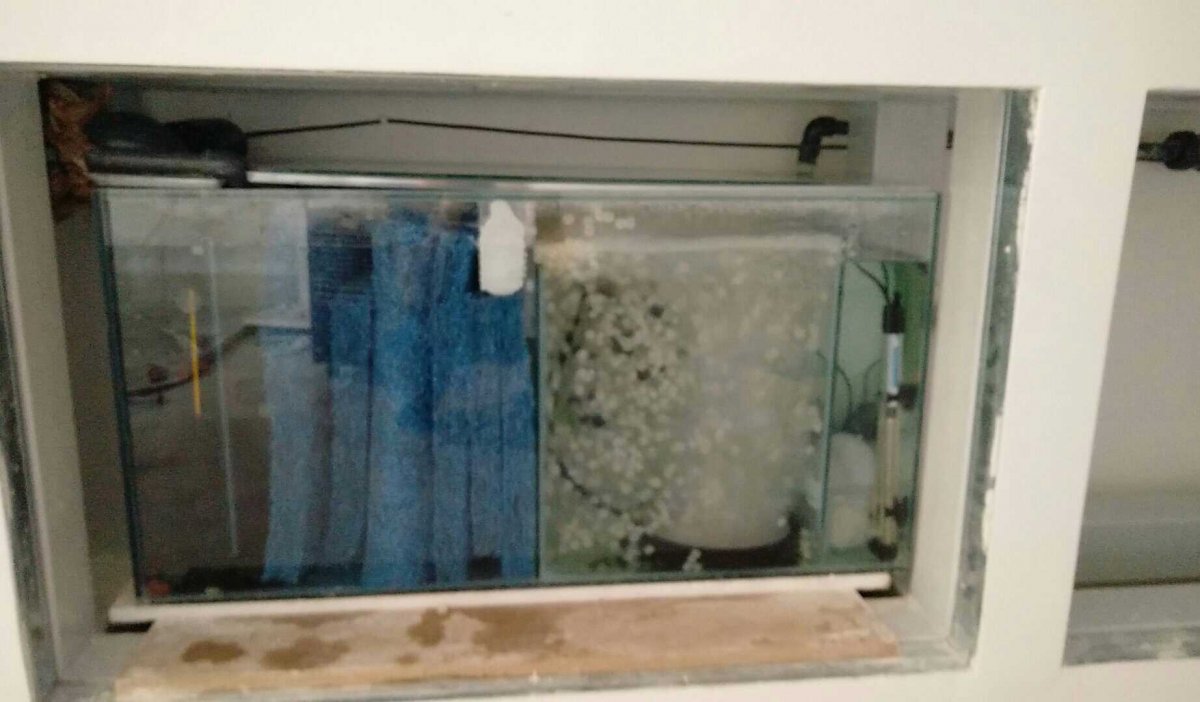 I was quite happy with the result it had taken me almost a month to fully build the plasterboard unit, painting, plumbing, etc...

After a couple of weeks I moved in the substrate (pool filtration sand) & some rocks from local beaches and a couple of weeks later the first few fish made it in! I could finally sit back and enjoy it for a while. 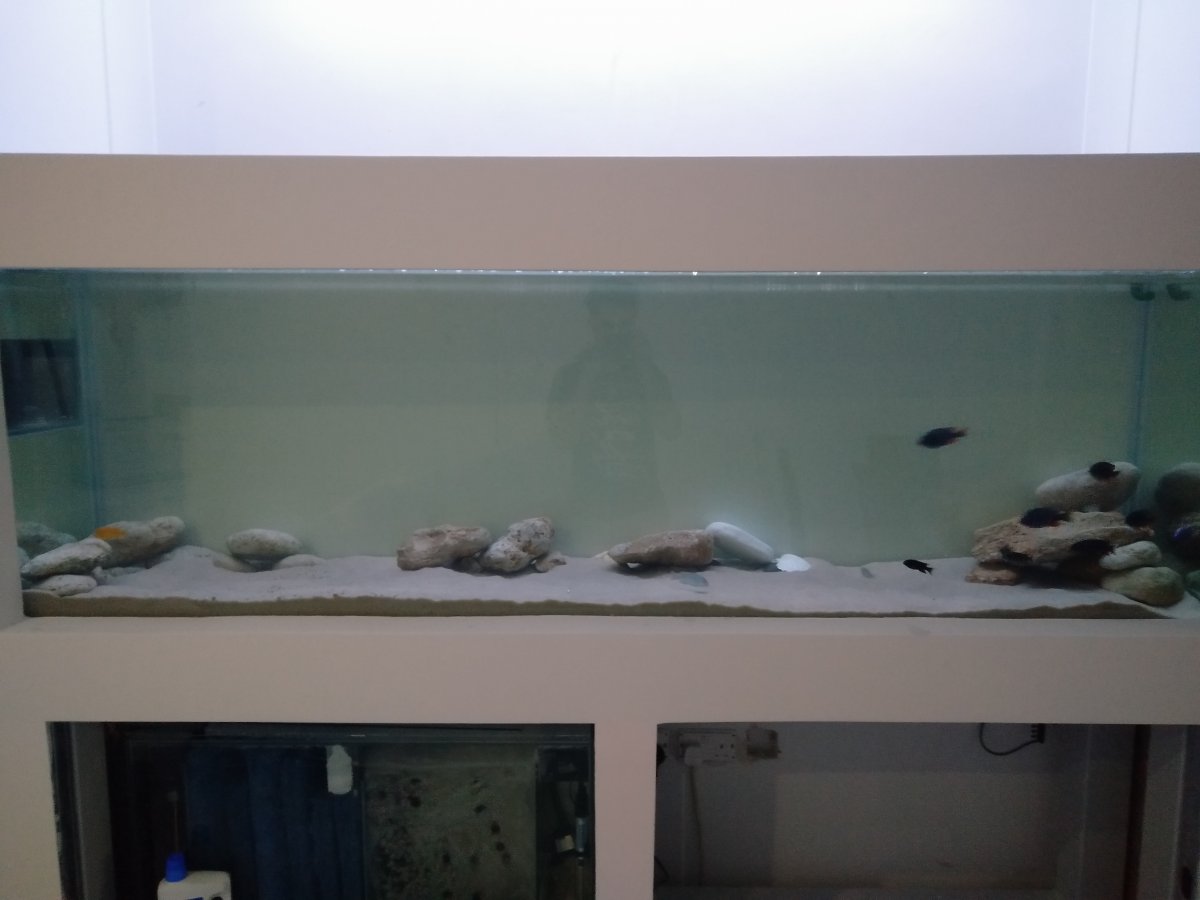 By September 2016 the tank was doing great and it showed! Water was crystal clear with almost no maintenance, was constantly getting cichlid fry and needless to say it was the first thing everyone that visited my house would talk about. 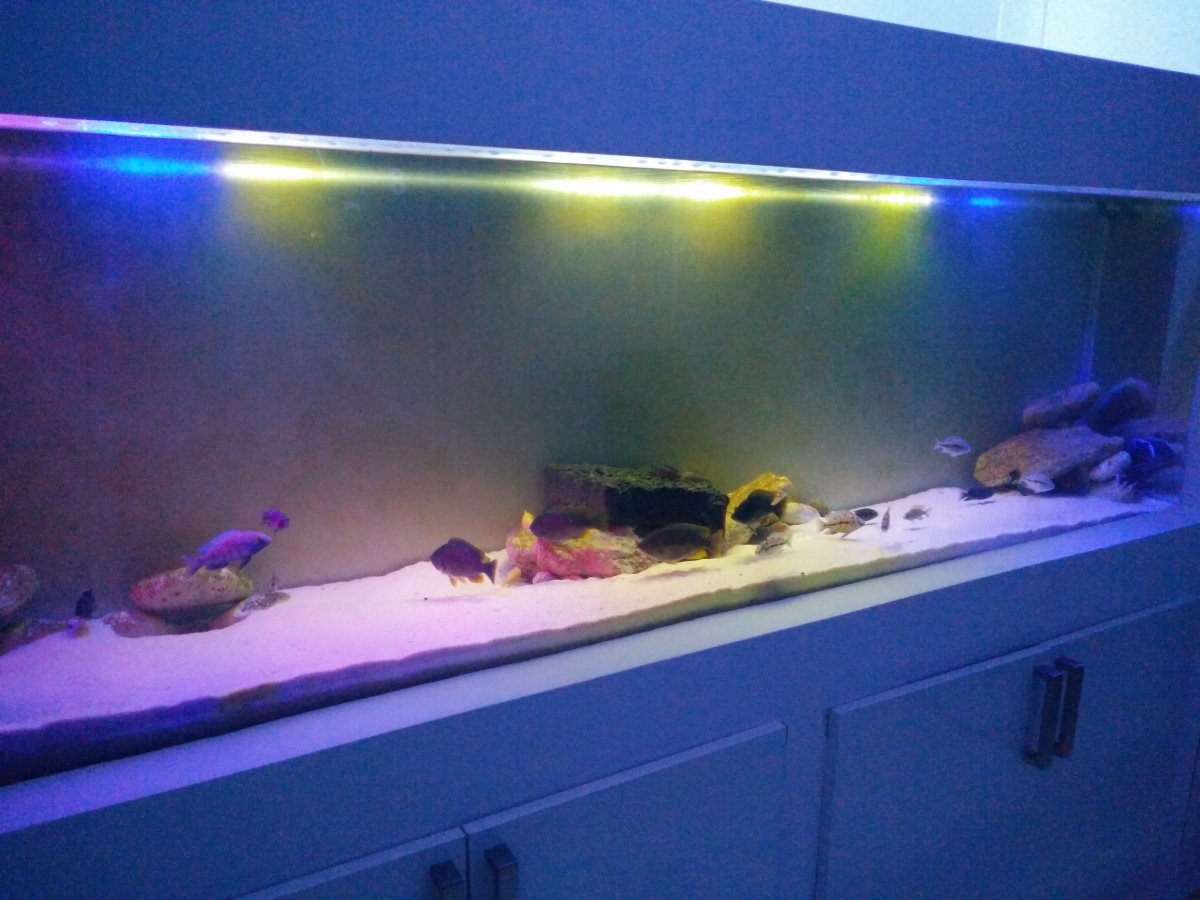 In February 2016 my father in-law convinced me to look into marine aquaria and needless to say I was just hooked, my awesome tank just had to house awesome corals and all the general favourites; Clownfish, Tangs, Angelfish, ... So it began!

I went ahead and sold all my cichlids and started the process of converting my tank into an awesome marine setup. At the time I thought that it wasn't going to be such a big deal since now I was quite confident working around my tank and owned a bunch of equipment already... I couldn't be more wrong as you'll read along.

Once the tank was empty I thought it was the perfect time to do the upgrades in my plumbing and general setup which I wished I had done the first time around. First upgrade was to line my tank with black acrylic panels so to hide the ugly unpainted wall behind the tank. 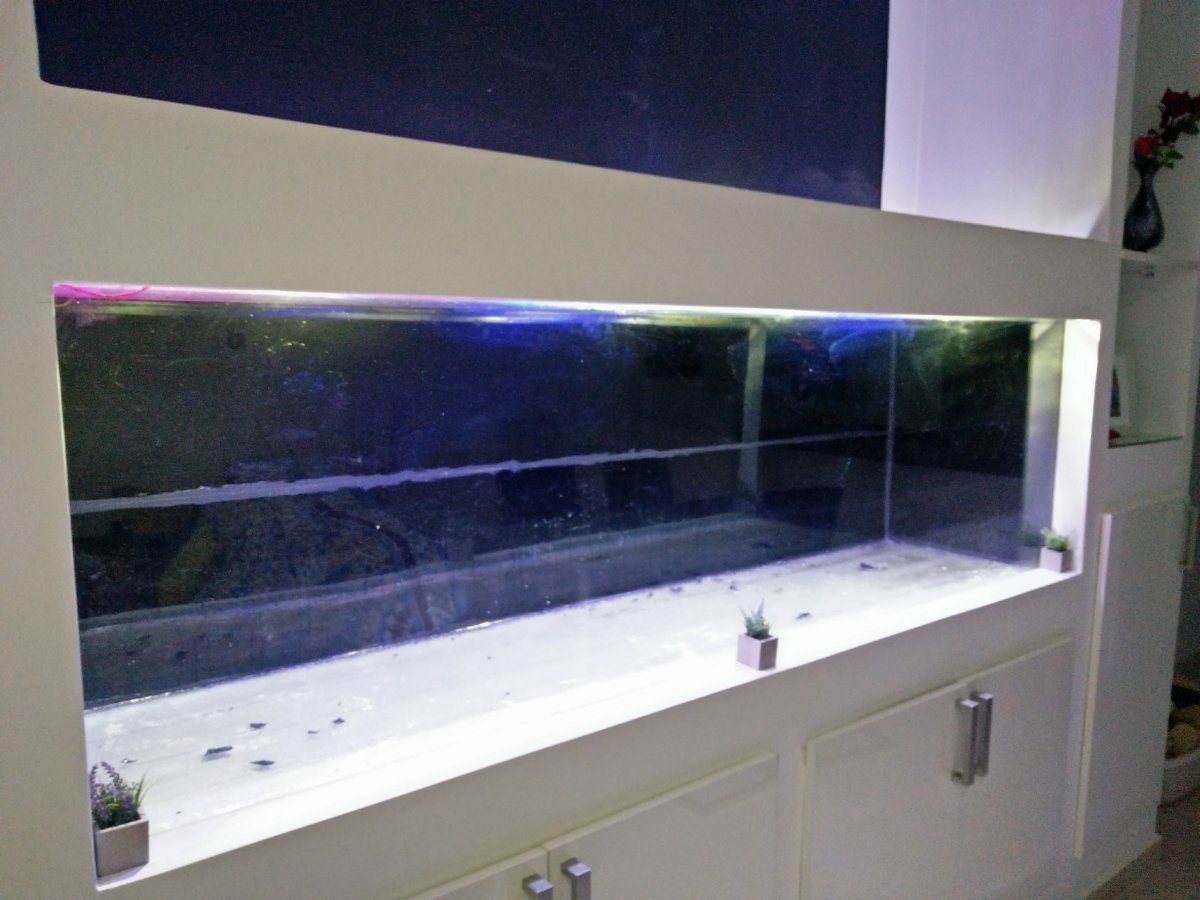 Next up in the todo list was to have 2 sumps and this was the most painful process ever. I broke 3 sumps in total while trying to plumb them together due to the fact the stand is so big I just didn't have enough room to work in and was constantly breaking the sump glass every time I tightened the bulkheads but after the third broken sump I've actually gotten it to work.

The next sump upgrade was to have a drain line where I could just drain the sumps by opening a ball valve rather than having to syphon the water out but that also leaked on a Sunday night... After the leak was fixed the sumps now had a drain line, great! 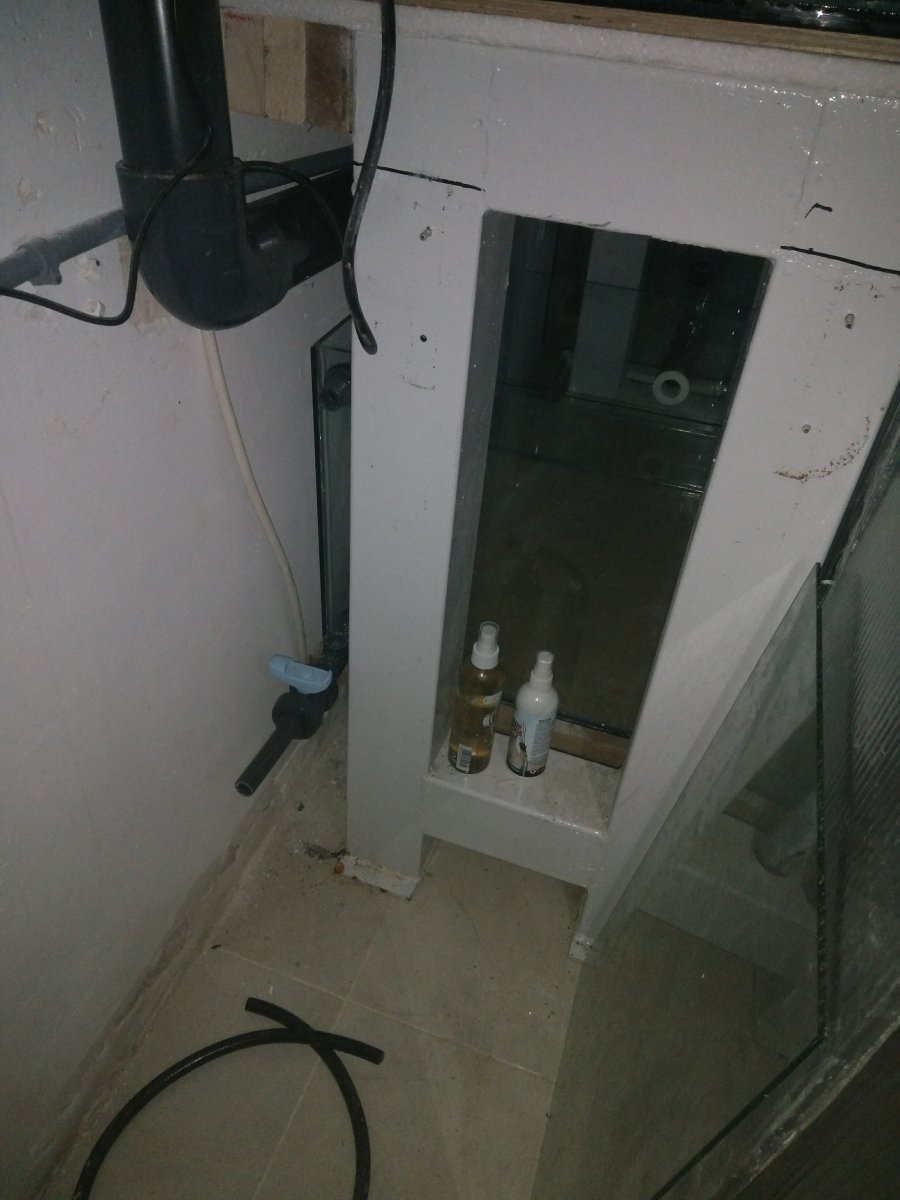 Another sump upgrade was to have a freshwater line for top-offs and here goes my first big mistake! Since I had installed a lot of water filtration for my home I thought it would be ok to use the filtered tap water... WRONG! After just a few weeks of my tank running I was forced to thoroughly clean my refugium from algae blooms. Which made perfect sense because my 'filtered' water had 900+ tds!! 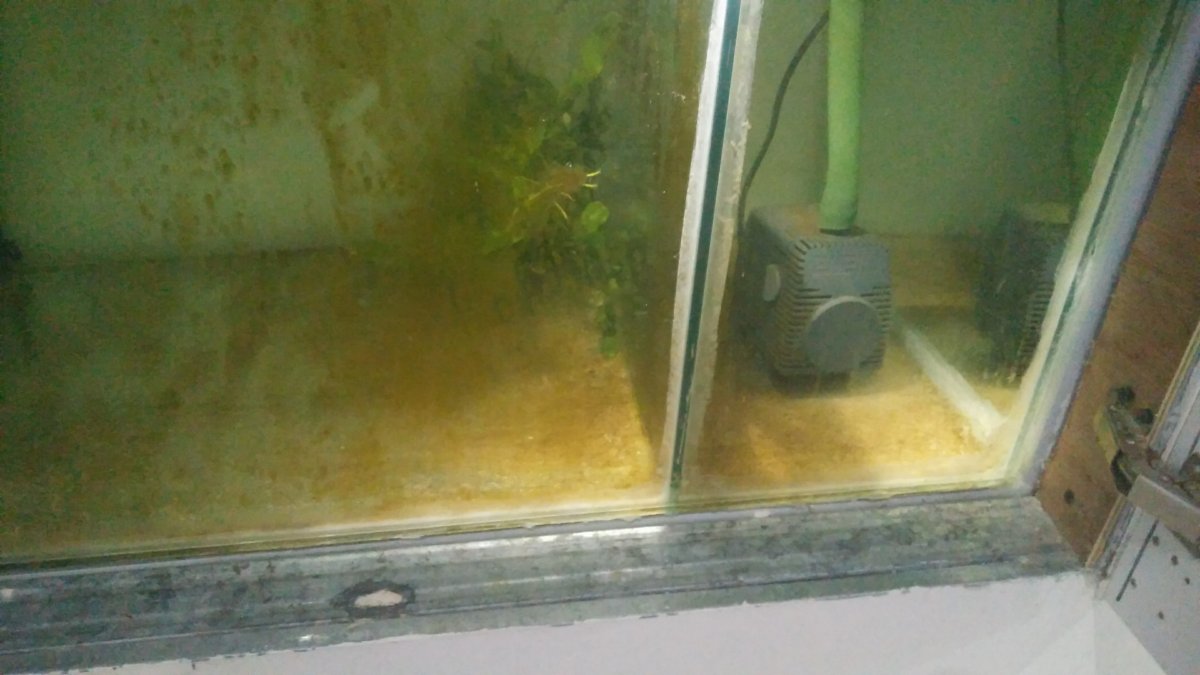 After installing a 4-stage RO system and doing a lot of bigger water changes the algae blooms reduced a lot but I still had them from time to time. The fact is that I can't afford DI Resin for now so I still have 40-60 tds water for water changes but that will be rectified soon.

By June 2016 the marine tank was running for almost 2 months, RO was installed, powerhead was installed, sumps where basically setup and a few fish had made it in but I still didn't have a protein skimmer so that came next. I had a good friend of mine supply a second hand Aquamedic T5000 baby. This thing is a beast! 4ft high external skimmer! 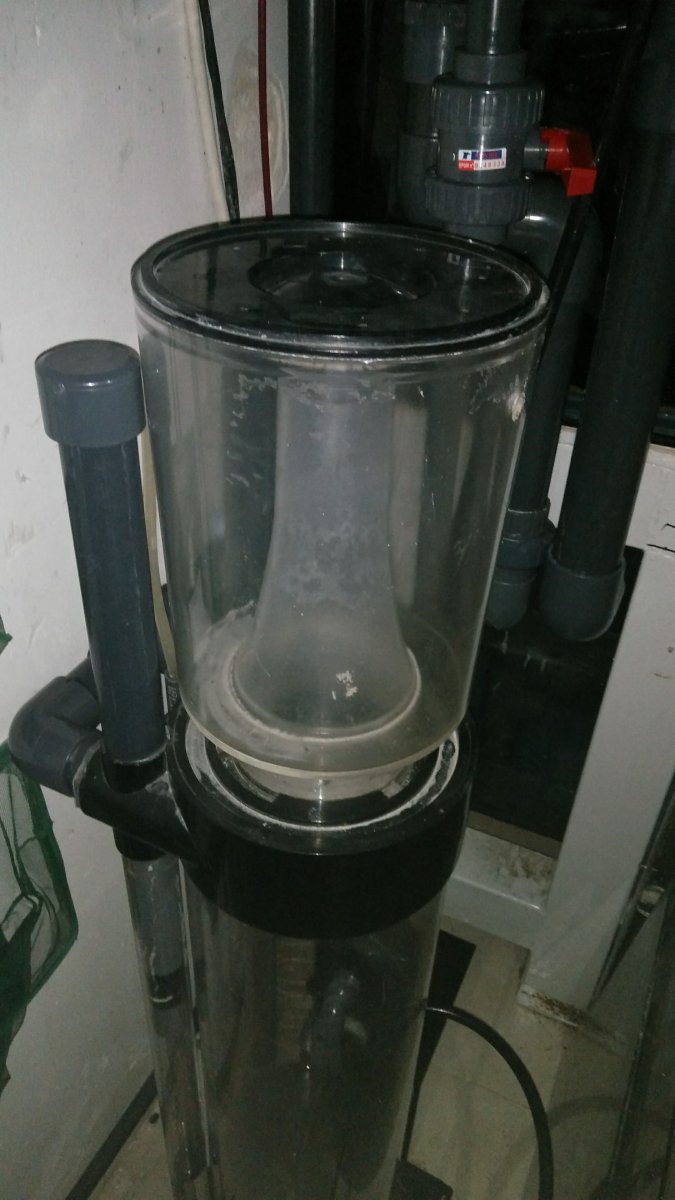 In July 2017 I installed a Jebao DCS12000 return pump to increase my turnover rate and I felt that the tank was almost ready for the beautiful LPS & SPS Corals and much bigger fish... WRONG! As the skimmer kicked in combined with the insane heat waves hitting the Maltese Islands the tank was overheating and I definitely didn't have the budget for a chiller so my living room had to look like this all day: 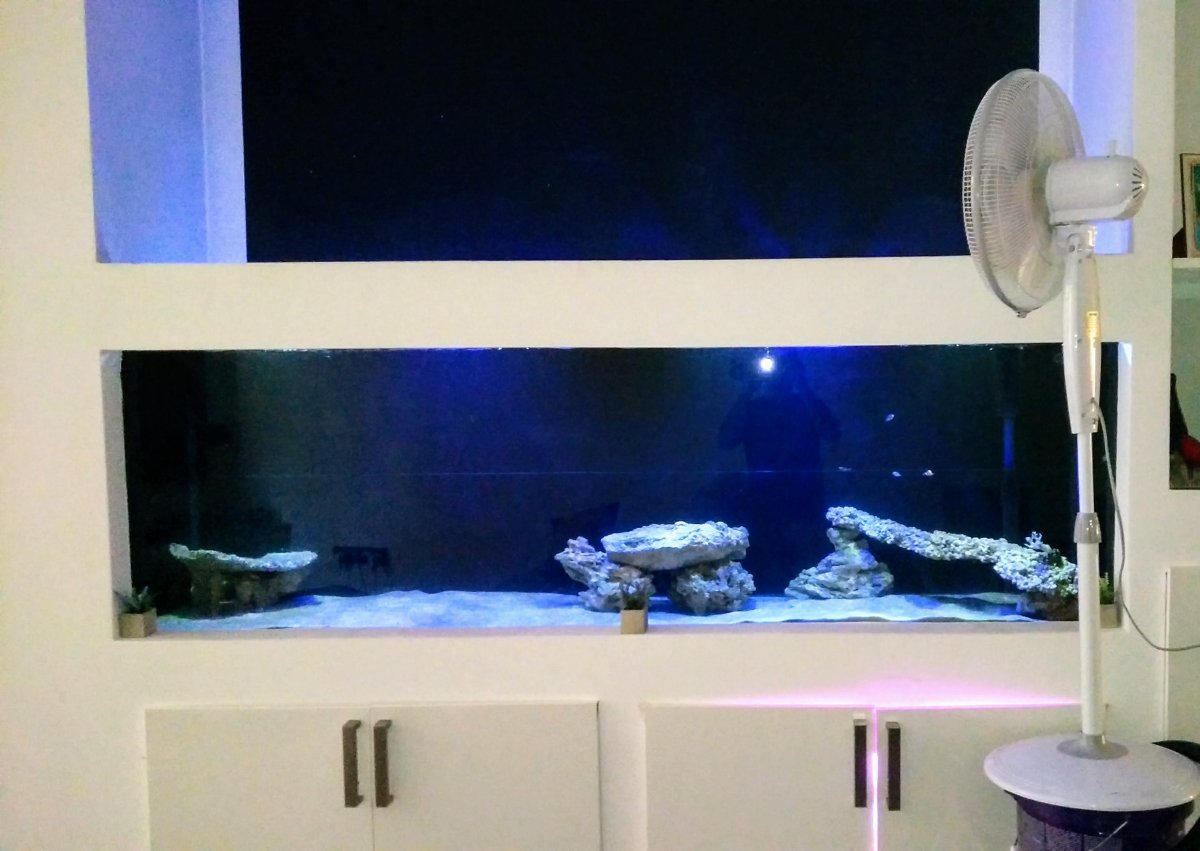 I believed that the tank was almost ready because all my water tests where pretty much bang on, temperature was stable, etc but quickly realized that the JBL test kits are the most accurate things I've ever used so switched to Salifert and had to admit that more effort was needed to get this tank ready.

Remember my friend that got me the skimmer? He also had a bunch of local reef rock which I picked up to help with my insanely high Nitrates, fairly high phosphates and general damsel cichlid aggression. 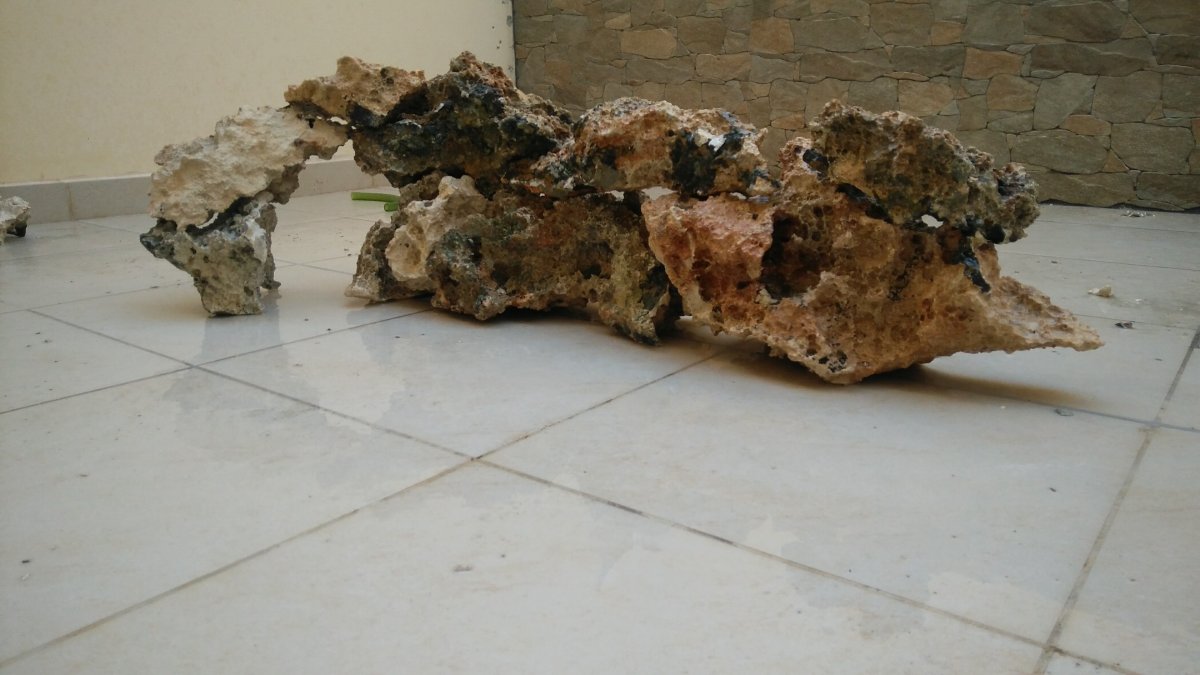 Obviously this wasn't going to be enough though so I had my mechanical filtration section upgraded to filter floss + Japenese matting since filter socks wasn't an option for me and started running rowaphos in a reactor which was later switched to carbon after I started to use NoPoX and the parameters were actually getting in check and I could finally breath a bit. 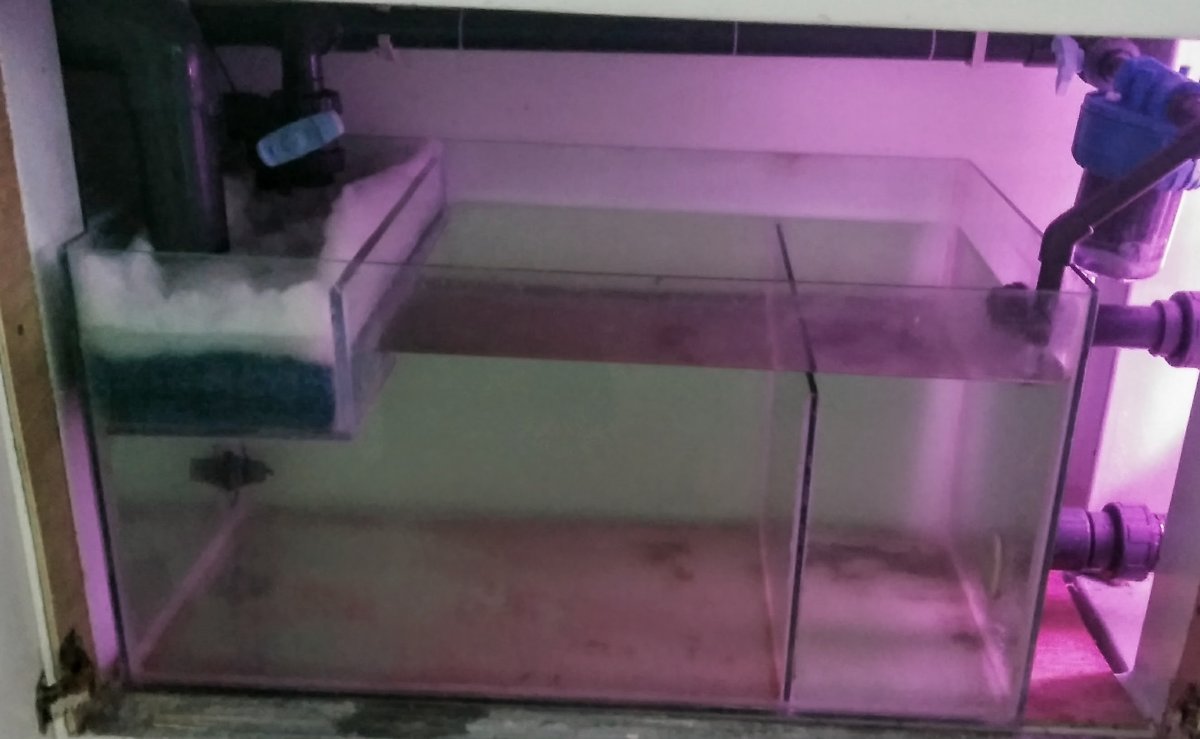 Which brings us to the day of writing of this post. The tank is doing great! I have 4 soft corals and a few damsels enjoying the huge tank.

The temperature problem is not so severe as I have 2x 120mm industrials fans blowing on water surface 24/7 and another 2 being installed soon, Nitrates and phosphate are in check, aggression has gone down where I can no longer see it anymore, turnover rate is approx 10x for return water and another 20x with powerheads and Algae blooms have almost disappeared. 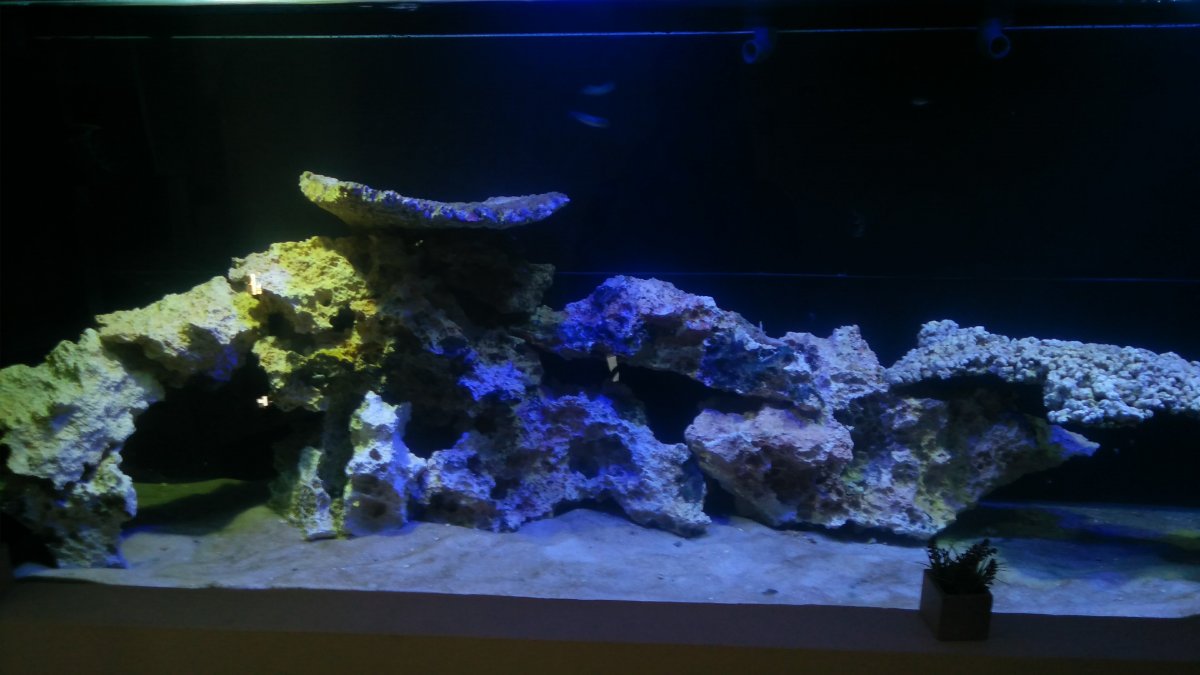 This brings us to; "What is left and when is it going to be fully stocked?"
To Do:
When this is all done the stocking will kick in high gear and I estimate that will be around September by December / January I would like to have the tank filled with many SPS frags and most of the fish I want to be happily settled in.
Last edited: Jul 29, 2017

Quick update to the above. Big colonies of amphipods, ghost worm & bristle worm have been found.

Which means I can start planning for my dream fish... Mandarin shall be joining the squad in the coming months